We hiked from Chicken Spring Lake in the Golden Trout Wilderness via the Pacific Crest Trail to Rock Creek in Sequoia National Park via Siberian Pass, on our way to the High Sierra Trail.  We hiked over nine miles and dropped about 1900 feet in elevation, and along the way we were treated to some fine views out to the west.  And even a few to the east.  A long, but satisfying day.

We woke up at first light this time.  None of this pre-dawn-darkness business.  We had a proper breakfast, steaming hot, with a cup of coffee, like civilized backpackers.  And it was all because the trail was mostly downhill.  Vicki and her poor lungs couldn’t wait to get back down into some thicker air. 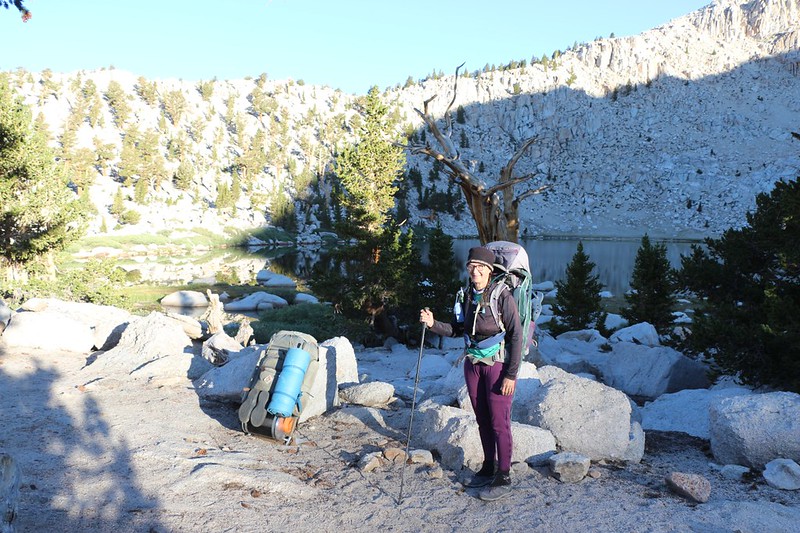 We packed up everything and headed out.  Naturally, the first thing that every trail does when you’re camping at a lake is to go uphill to get out of the basin, and this was no exception.  Of course, the PCT, being the ornery thing that it is, had to go this rule one better.  It decided to climb all the way up and over a ridge right away.  250 feet of climbing, and Vicki hated every minute of it.  But the views were worth it, in the end.

Initially, we had great visibility of Chicken Spring Lake down below, and we could see the location of our previous campsite.  Soon the trail topped the ridge, at 11,500 feet elevation, and we got even better views to the west, over the Golden Trout Wilderness.  Big Whitney Meadow was far below us, and I pointed out to Vicki where a trail crossed it, and where the ground was swampy when the boys and I hiked it last year just before the thunderstorms drove us back to the car.  We decided that we didn’t want any thunderstorms this trip, and even though we had two cars we knew that they wouldn’t help us much when they were so many miles away.  And today’s weather didn’t look like it would cause any problems.

Off in the distance to the west was Kern Peak, and to the south was Olancha Peak, which we had hiked across earlier this year.  Down below us, Golden Trout Creek began collecting its waters, and to the south was the headwaters of the South Fork of the Kern River.  To the northwest was the Kaweah Range, which we would circle around after reaching the High Sierra Trail.  I had studied the maps so much when planning this hike that I was having a great time just looking around, identifying everything in sight, and viewing our route in the real world. 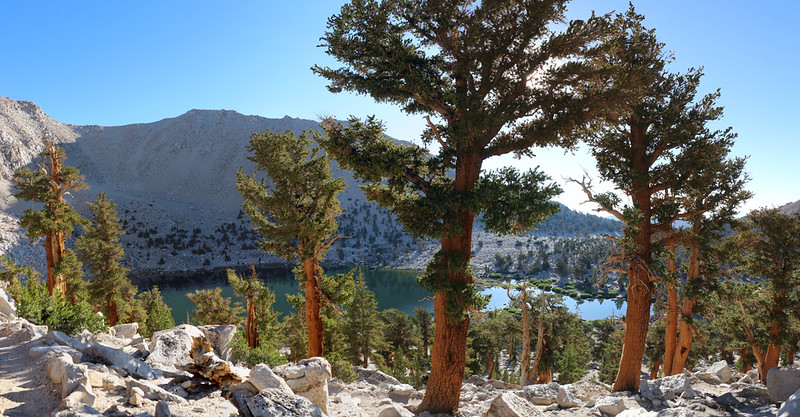 Panorama video from the ridge, looking out over the Golden Trout Wilderness 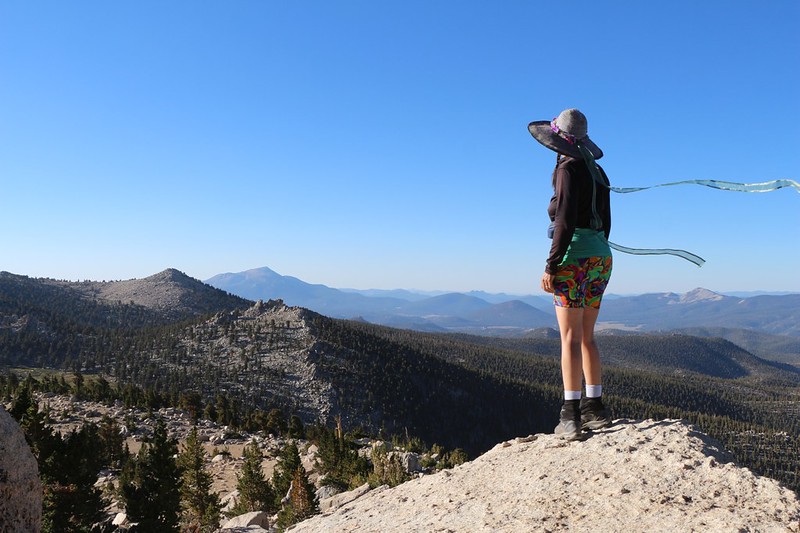 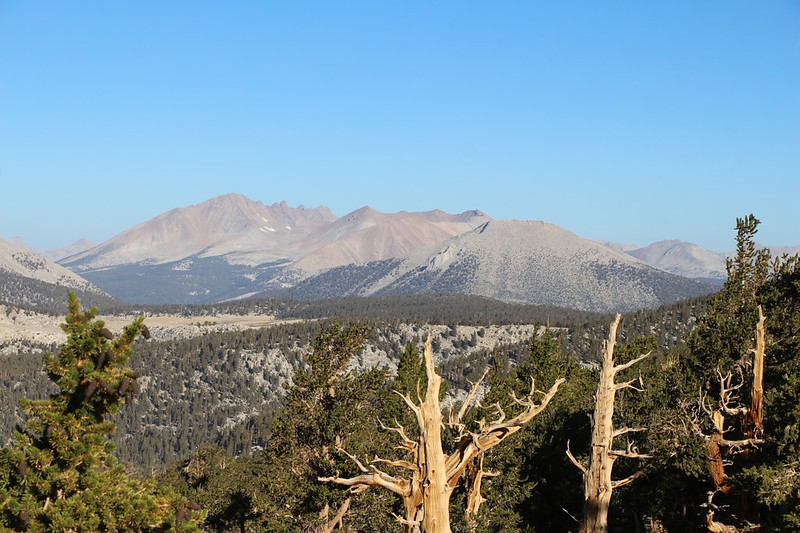 Looking northwest toward the Kaweah Range

An hour or two later, after three miles of easy hiking, we reached Siberian Pass, and entered into Sequoia National Park.  We said goodbye to Whitney Meadow, and enjoyed views of the next high meadow, called the Siberian Outpost.  This name made us laugh, I have to admit.  In the dead of Winter it probably seemed like Siberia out here, and the Outpost made us think of some sort of General Store, like a trading post from the good old days.  Neither seemed likely. 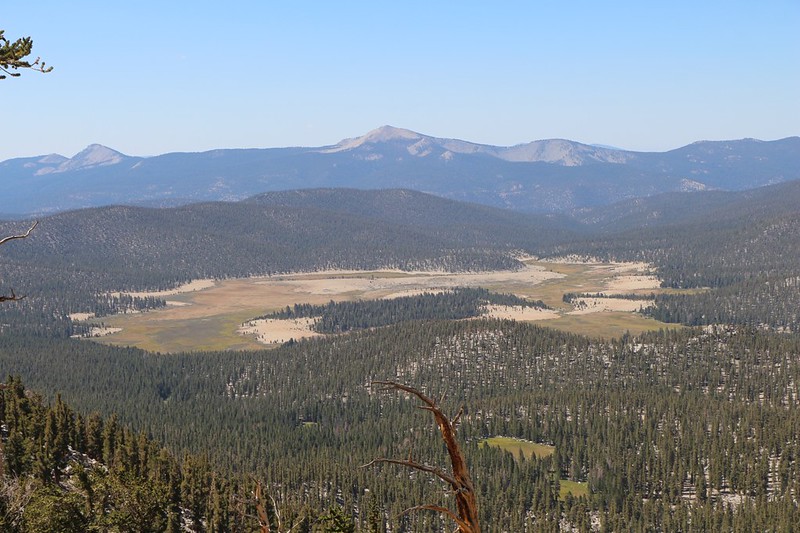 One last view of Big Whitney Meadow from the PCT near Siberian Pass, with Kern Peak, center 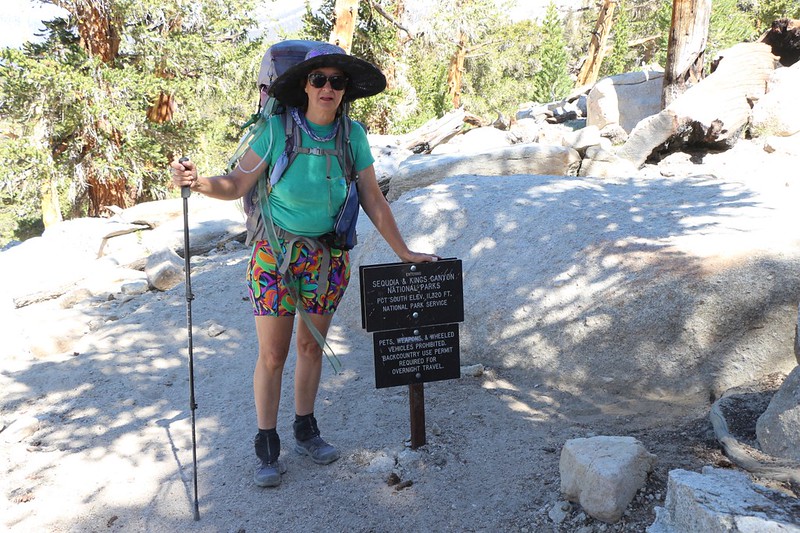 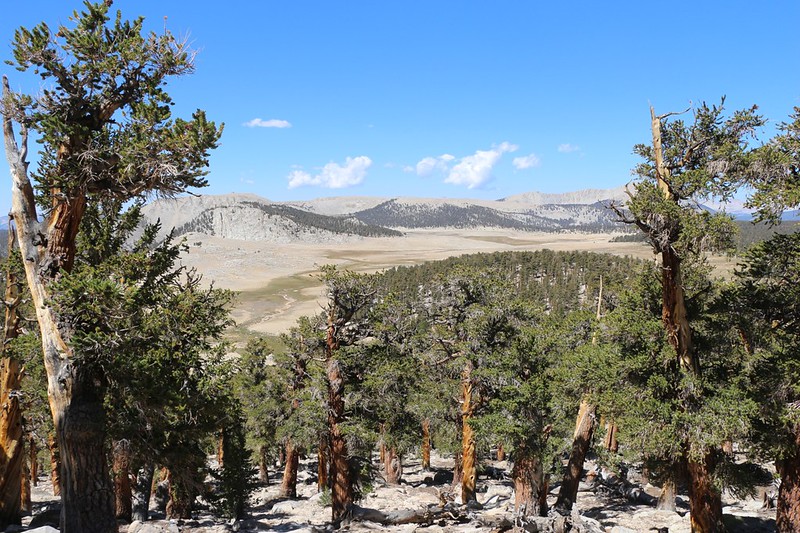 The trail lost altitude gradually, then flattened out as it traveled westward on a long ridge.  To the north and east were many peaks along the Sierra Crest, including those within the Miter Basin.  This basin was on my shortlist of places to visit.  Maybe next year, I thought.  I fired up the PeakFinder app on my phone and identified the nearby peaks.  I was hoping to get a view of Whitney from here, but it was hiding behind yet another tall peak.  Oh well.  We’d probably see it tomorrow, when we arrived in Crabtree Meadow. 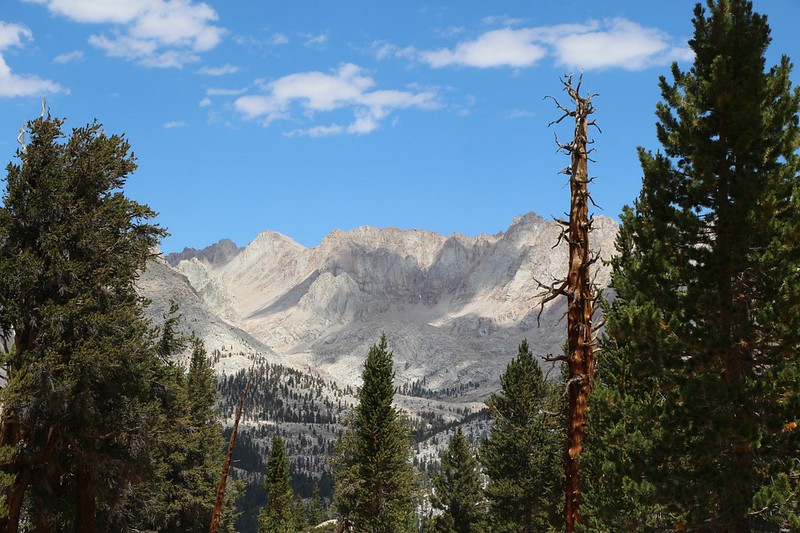 Zoomed-in view of the Miter Basin area, with Mount Mallory, The Miter, and Mount LeConte

We neared the end of the ridge at the six mile mark, and decided to take a long break and eat some snack.  We took off our boots and aired out our socks.  Vicki took a nap in the shade while I read my book.  Just another mellow day, backpacking in the Sierra Nevada, in other words.

Just ahead was three miles and 1300 feet of continuous downhill hiking.  There were a few switchbacks, but mostly the trail curved around the end of the ridge, first descending along Siberian Pass Creek, and then dropping directly into the Rock Creek Valley, where there were several lovely green meadows. 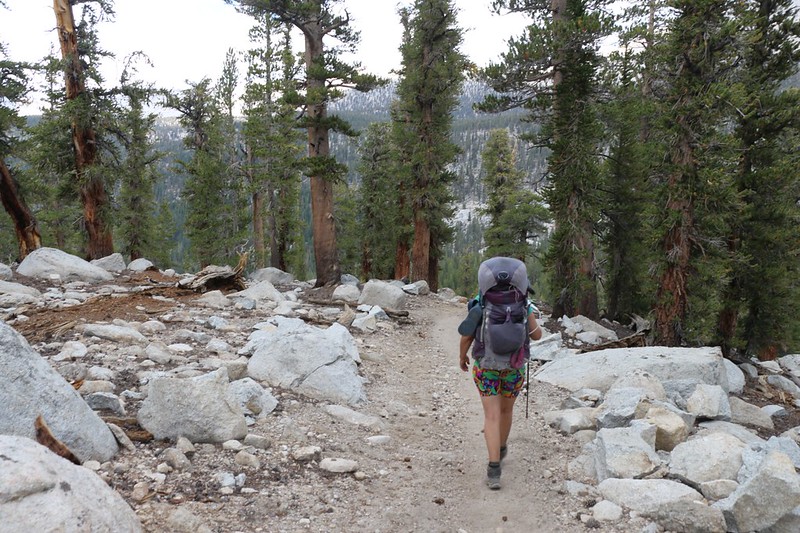 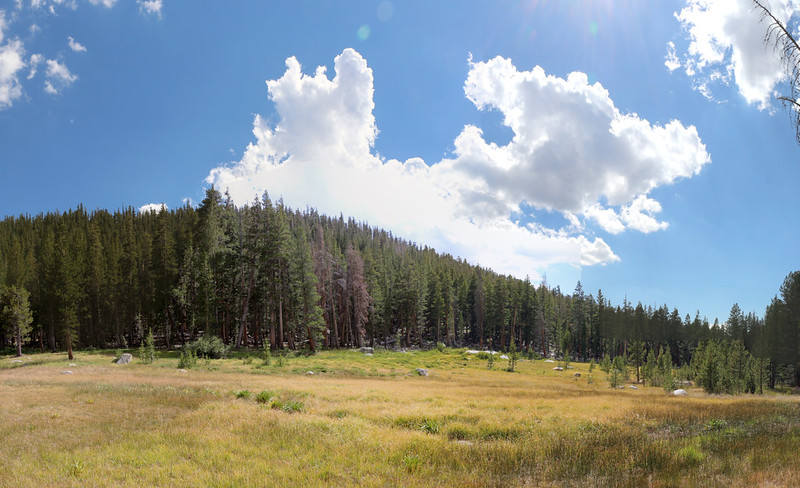 At the bottom of one of the meadows, we saw a great campsite, not far from Rock Creek, which was flowing well.  I checked the GPS and we hadn’t really made it to the “proper” Rock Creek campsite, which was nearly a half mile away.  Vicki and I looked at each other.  Did we really feel like hiking another half mile?  Heck no!  We’d worry about making that extra distance up tomorrow.  So we set up the tent and Vicki crawled inside, exhausted and ready for a final afternoon nap.  Nine miles was a very long day for us.  While she slept, I went down to the creek and collected/purified two gallons of water for dinner and tomorrow’s hike. 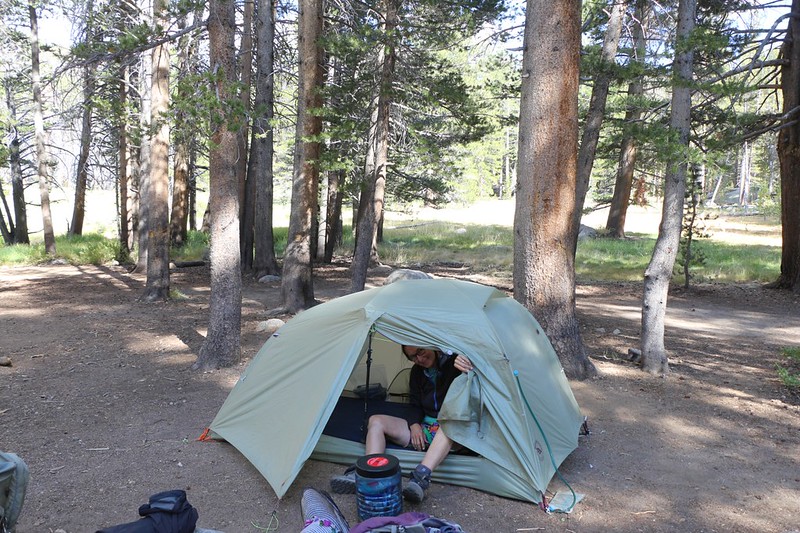 Our tent and campsite next to Rock Creek

Vicki woke up feeling refreshed and we cooked up some dinner.  She was feeling much better now that we were back down at 9600 feet elevation.  It was still pretty high, but she was definitely getting acclimated.  Her headache was gone and her breathing was less labored.  All too soon, the sun dropped below the surrounding walls of the valley and the temperature cooled.  We put on our warm night layers and then took a short constitutional, hiking along the meadow and up a small stream to the Rock Creek backcountry ranger station.  For once, the ranger was there!  He came out and we talked for a while.  He was super-friendly.  We both envied him, and told him so.  Just imagine, we said to ourselves, being able to stay out here in the High Sierra for an entire Summer!  A dream job if ever there was one. 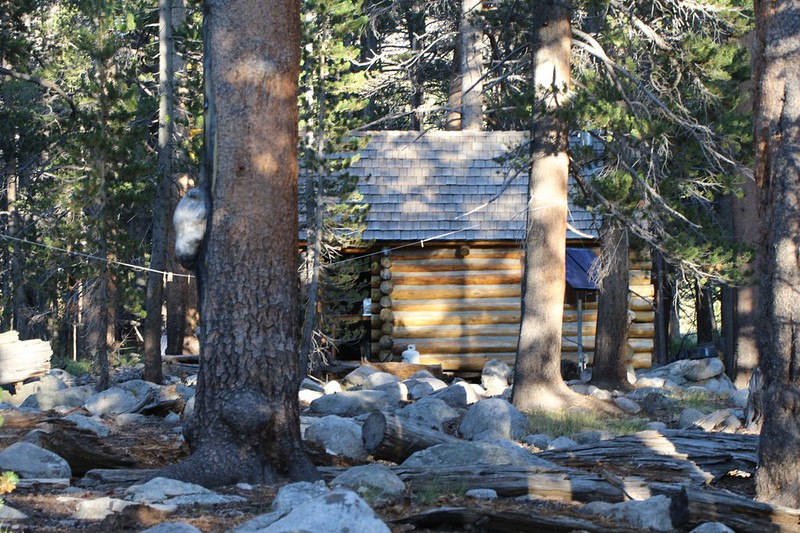 After dinner, we took a walk to the Rock Creek Ranger Cabin and spoke to the ranger for a short while – nice guy!

After that it was time for bed.  The next morning we had to make up that extra half mile, and also had to hike up and out of the valley, with 1500 feet of climbing to do.  Vicki insisted that we wake up in the dark, and get the worst of it over with before the temperature rose too high.  And I was perfectly OK with that.