We backpacked from the Horseshoe Meadows trailhead to Chicken Spring Lake via the Cottonwood Pass Trail, a total of 4.7 miles of hiking and 1300 feet of climbing, for a relatively easy day, in order to get warmed up for the rest of the 11-day trek on the High Sierra Trail.

It was going to be easy, but just the same, Vicki wanted to leave extra-early, to get most of the climbing over with while it was still cool.  This is normal for her, as she overheats easily, and it’s fine by me, as I’m a morning person anyway.  So we woke up at 4am and started up the car.  Why?  To turn on the heat!  It was cold out there!  We snuggled down into the sleeping bag and waited for the warm air to arrive.  Then we sat up and began changing into the hiking clothes we’d been saving.  Our packs were mostly packed already, so it didn’t take much effort.  Then we had to go outside and make sure that everything we needed was actually IN the backpacks, and not left behind in the car.  We couldn’t use it if we didn’t carry it with us.  After that, we stowed everything car-related in the back, out of sight, and secured the car food in the nearby bear lockers at the trailhead.  It was time to lock the car and take some official photos! 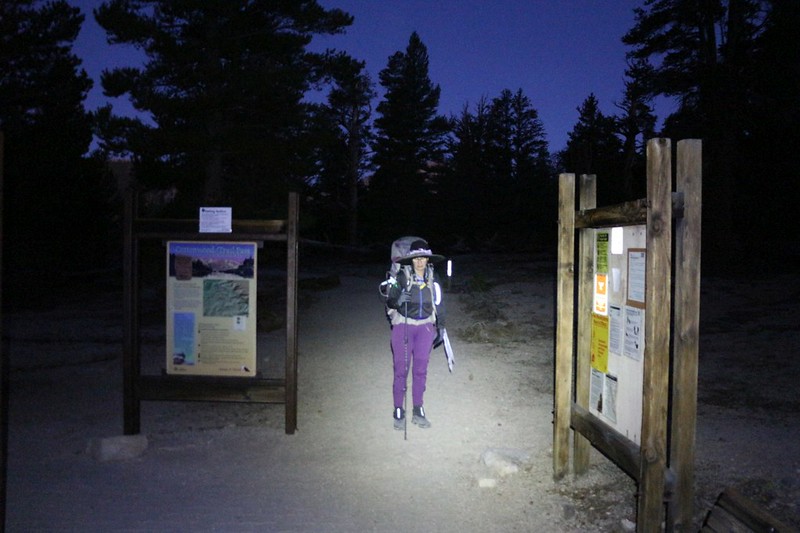 We started hiking in the dark, at five-thirty AM, in order to make it over Cottonwood Pass while it was still cool

The first mile and a half was super-easy:  Wide and flat.  I’d been down this trail many times, so I didn’t really need many new photos, which was good because it was dark.  The light increased as we hiked, and soon we were treated to views out over the meadow.  We even got to hear a pack of coyotes make their eerie sounds, the yips and cries of the pack, echoing out across the big meadow, heralding dawn, breaking the quiet of the morning. 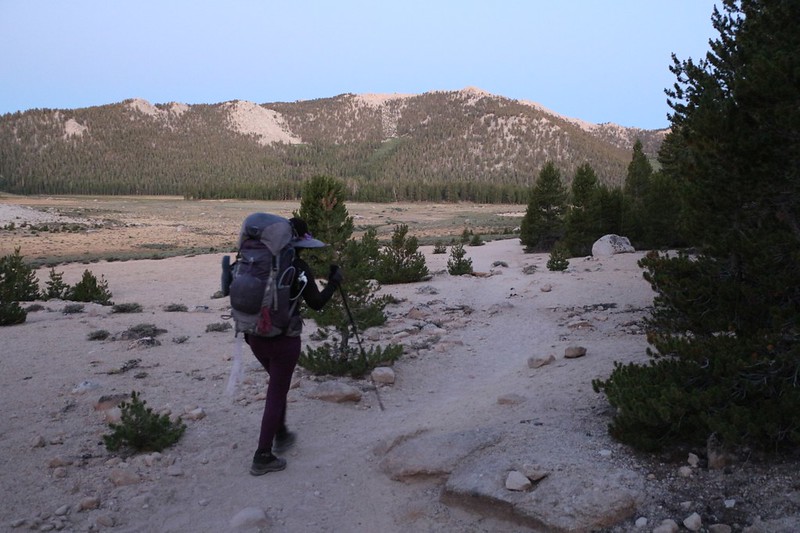 Video of us listening to the pack of Coyotes before dawn 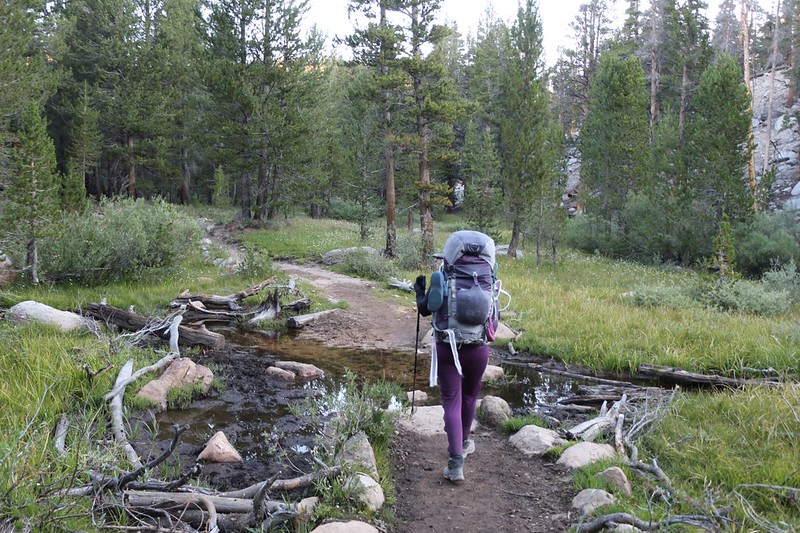 Crossing a small creek near the upper end of Horseshoe Meadows

All too soon, it was time to start climbing.  It was two and a half miles to the pass, and we noticed every single step of it.  My backpack was seriously heavy, over sixty pounds, with my share of the eleven-day food supply inside it.  I had one bear cannister, Vicki had the other, and both of us were feeling it.  But our strategy of leaving early was paying off.  The air remained cool, and so did we.  As we climbed up the switchbacks the views became better, and Horseshoe Meadows got further and further away. 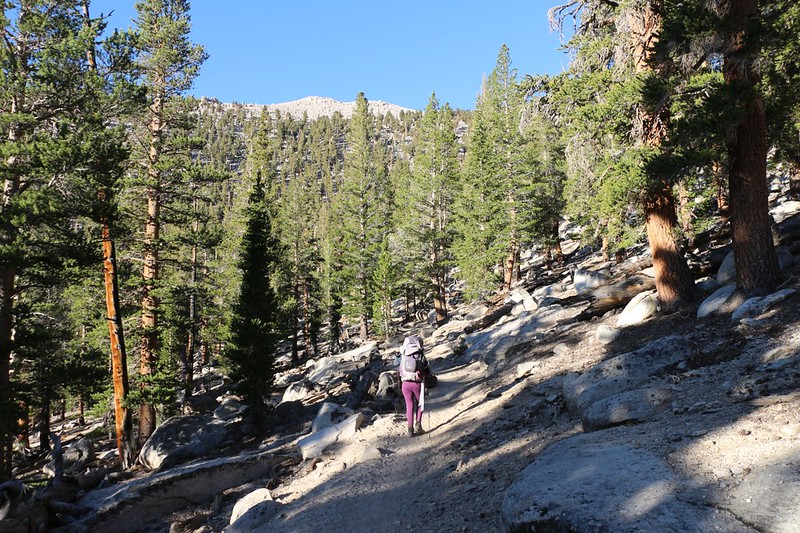 The trail started climbing in earnest as we switchbacked upward to the pass. The sun was up but the air stayed cool. 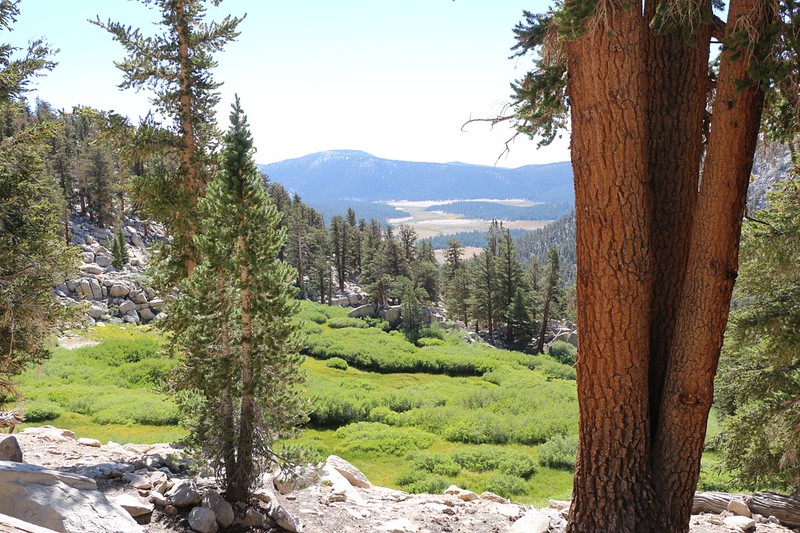 Eventually, of course, the air did get hot, and so did Vicki.  She really needed a break and a nap, but we were so close to the pass by then that I asked her to wait.  She sat on a comfy boulder while I went forward to the pass.  I dropped my pack and walked back to Vicki, where I put on her pack instead.  She was feeling a bit tired and zombified, but removing the weight really helped. 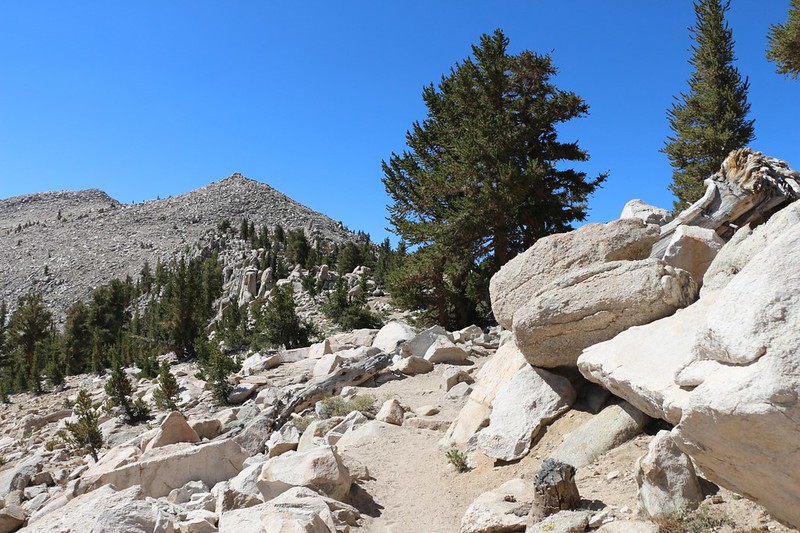 We took in the views, and then sat down in a sheltered spot to have some lunch.  There was a fresh cool breeze blowing, but that’s only good while hiking, not resting.  We ate lunch, and Vicki took a nice long nap.  She deserved it.  We only had another mile or so to hike that day, and it was much less steep than the switchbacks, so there was no rush whatsoever.  The hard work of the day was already done. 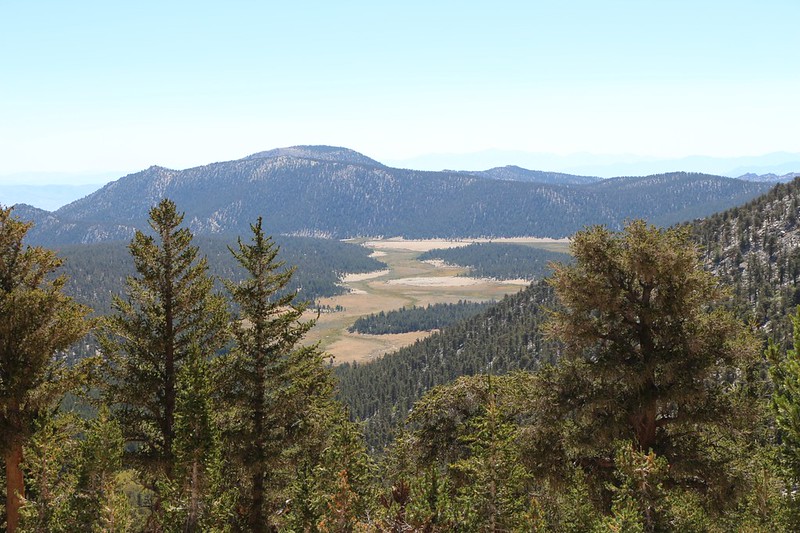 Looking back east at Horseshoe Meadows from the pass 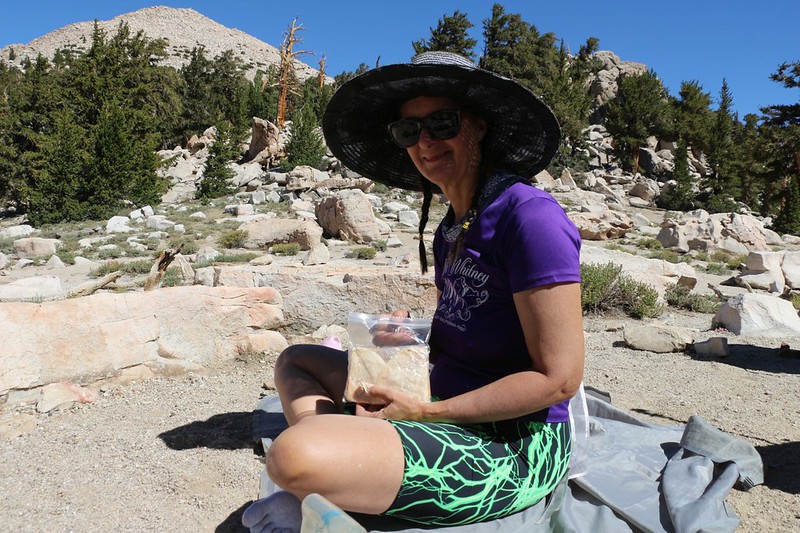 It was well before noon but we started early, so we took a long break and ate lunch

When she woke up, I told her the sad story of how the boys and I had hiked through this pass on Labor Day Weekend the year before, soaking wet and freezing cold under a constant deluge of rain, thunder, and lightning.  What a contrast to today’s beautiful weather!  But that’s the Sierra Nevada for you: Mountains so big they make their own weather.

We put on our packs and started the easier hike along the Pacific Crest Trail.  The PCT was an old friend.  We’d been hiking it for years, one small section at a time.  And it really added up.  We had well over 500 trail miles (of 2600 total) under our belts, and I felt pretty certain that we’d hike it even more in the years to come.  In fact, it was difficult to avoid the PCT in the High Sierra, as it threaded its way through the heart of the range. 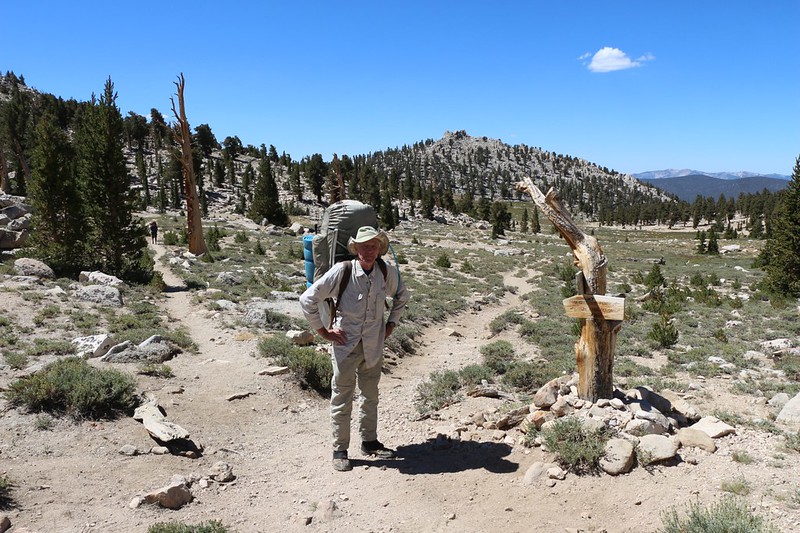 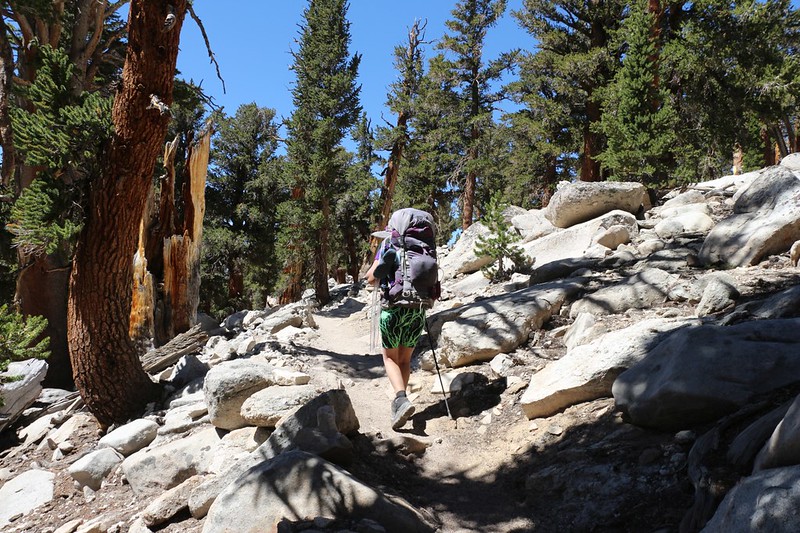 As we neared the lake, I checked my watch and realized that it was extremely possible that we might get to it by noon!  This artificial deadline became my new goal.  Unsurprisingly, Vicki had no such goal; her only desire was to continue breathing well enough to hike, up at this lofty altitude.  So I told her to take a break while I scouted ahead for a campsite.  And that’s what I did.  I climbed up the final slope, crested a ridge, and there was the lake before me.  I looked down at my watch as the minute hand clicked onto the twelve.  I did it!  It was a silly thing, I know, but it made me feel good.

I hiked further and found a nice campsite.  I put down my backpack to claim the spot, and then went back to Vicki.  Once again, I shouldered her pack, and we made our slow way up to the camp.  She was breathing hard and said that her heart felt like it was going to pound itself right out of her chest.  She was also quite relieved that the hike was over, and sat down in the shade while I got out the tent.  She helped me set it up, then crawled inside for a long afternoon nap.  And I joined her this time, although I mostly just read my book.  It was great to relax near a High Sierra Lake on a warm Summer afternoon. 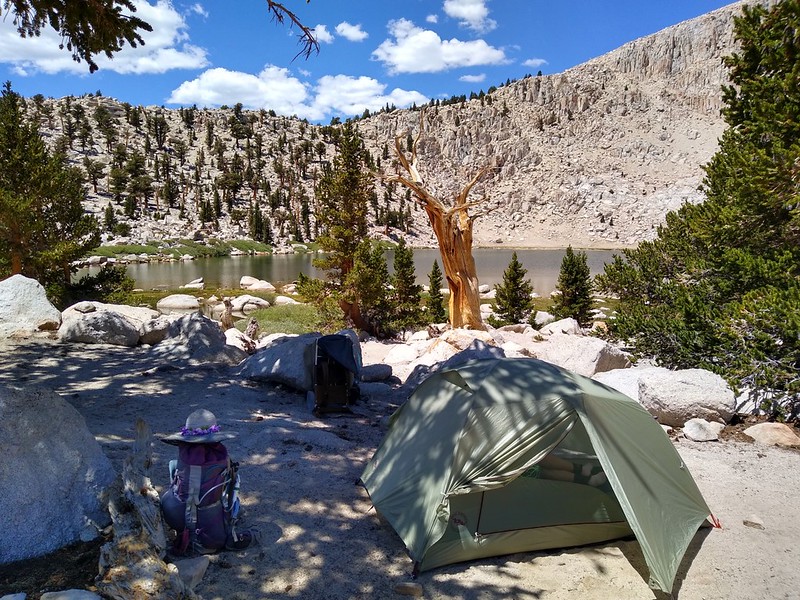 Our tent and campsite at Chicken Spring Lake. We were happy to find a spot with some shade.

We didn’t sleep forever.  Soon enough, we were filtering water from the lake and thinking about making dinner.  We took a walk around the area, and checked out some of our new neighbors.  I had a feeling that this place tended to be mobbed early in the season when the main rush of PCT hikers came through, but it was too late for them now.  Plus, this was 2020, and everything was unusual.  There were far fewer people hiking in the mountains this year.  And we weren’t crying about that.  It was like having the opposite of a problem. 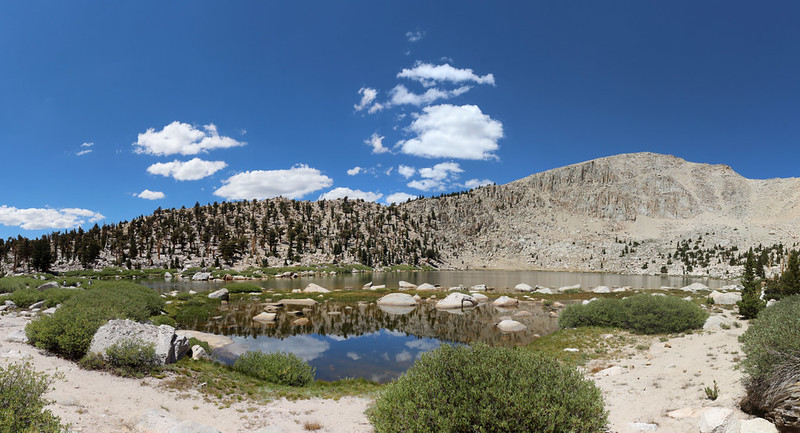 Panorama video of Chicken Spring Lake from the eastern shore 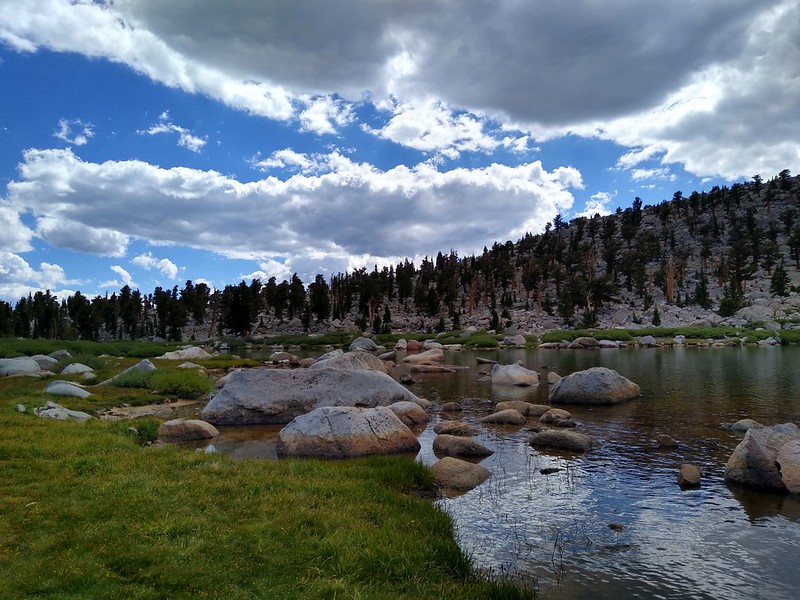 The water level was a bit low in mid-August 2020

While we hung out in camp, we watched a huge thunderhead build up to the north.  It was probably forming over Mount Whitney.  We hoped that it wouldn’t drift our way, and it mostly didn’t, although we got a few sprinkles on the tent before the big cloud leaned back north.  We heard a few booms of distant thunder, but that was about it.  Vicki calls this the “Daily Afternoon Thundershowers” of the Sierra Nevada, and she was mostly correct.  They form, they rain, they hail, they thunder, and then they melt away by evening. 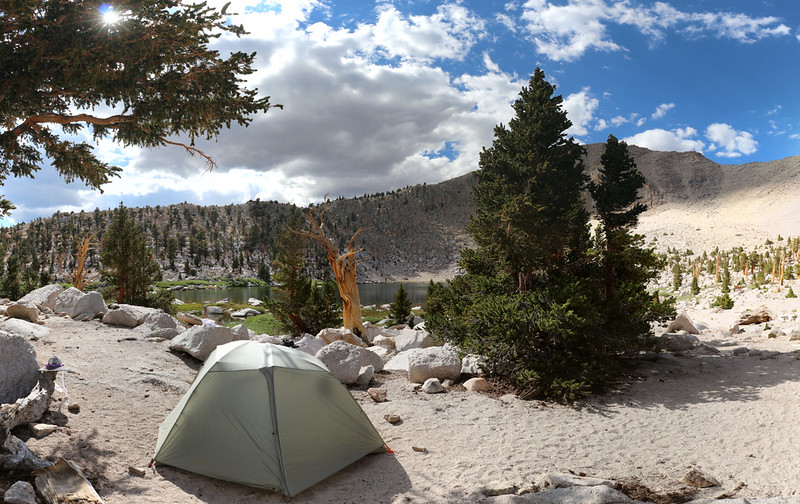 Our campsite with a view

The sun sank down and the air became much cooler, as it always does at eleven thousand feet elevation.  We put on our warmer clothing and ate some freeze-dried dinner.  Then we said goodnight to the lake and headed inside to bed.  It had been a good first day, and we were looking forward to tomorrow’s hike to Rock Creek, which would be much longer, but downhill most of the way.