We backpacked from Rock Creek on the Pacific Crest Trail to Crabtree Meadow via Guyot Pass, for a total of six miles of hiking and a climb of 1800 feet, on our way north to the High Sierra Trail.  Now, I realize that six miles isn’t much, but that’s the way we planned it.  We’re pretty wimpy hikers, to tell the truth.  But we also like to take our time and enjoy the scenery.  Why rush through a once-in-a-lifetime trek in the High Sierra when you can stay out there even longer?  It’s a no-brainer when you think about it.

On this day, we woke up extra early, in the dark, and started to get ready in the tent.  It was quite cool outside, but that was OK.  It was part of the plan.  We had a lot of climbing to do in order to get out of the deep valley, and Vicki needed to get it done without overheating.  We brought several no-cook breakfasts with us, just for these occasions.  Mine was strawberry Pop-Tarts, because I have a sweet tooth, and Vicki chose a baked fruit bar that was much less sweet.  But we did all the packing first, then started eating breakfast while we hiked along the trail. 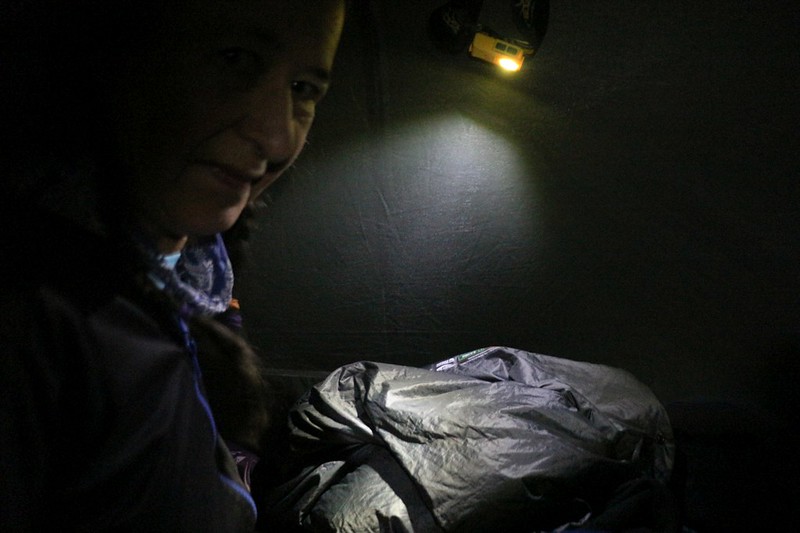 We woke up at 4:30am because we wanted to climb up out of the Rock Creek valley early, before it got too hot

It was 6am when we started hiking down Rock Creek on the PCT.  We had an extra half mile to hike before we reached the main backpackers campsites and the creek crossing, and it was an easy downhill slope.  The air was cool and moist, and the forest was peaceful, with a few birds just beginning their morning wake up calls.  We saw some other hikers in the camp, but they were just waking up and eating breakfast.  We totally had them beat, at least for now.  The creek was quite easy to cross by stepping on the stones this time, with a relatively low flow rate, as it was mid-August in the dry year of 2020.

Rock Creek flowing through a meadow next to our campsite 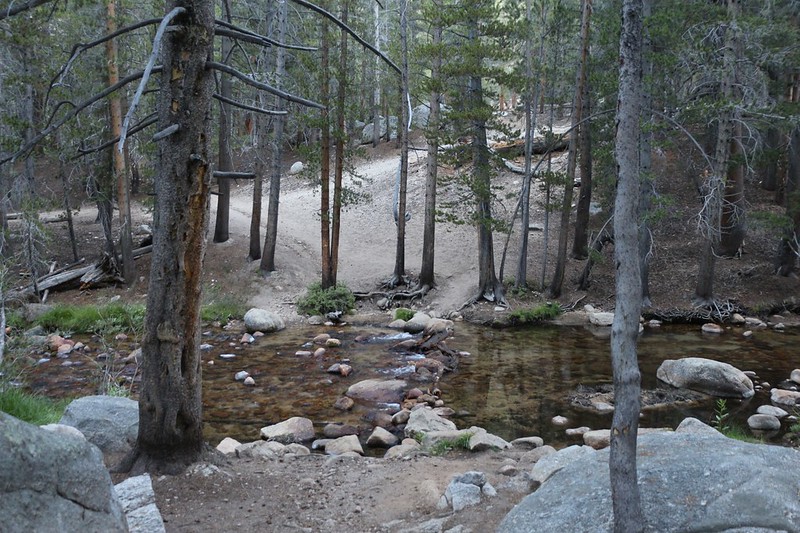 Then the trail started uphill in earnest.  Plenty of switchbacks.  And my backpack was heavier than ever!  Last night, we had talked about ways to lighten Vicki’s load, and the resultant solution was that I would carry both bear cannisters in my big pack, which now weighed quite a bit more.  Vicki carried some of the food, as well, just to be fair, but her pack ended up much lighter without that extra three pounds of deadweight plastic, plus most of the food.  It didn’t matter much to me.  I’m used to being her pack horse!  And she seemed to be hiking uphill much stronger today. 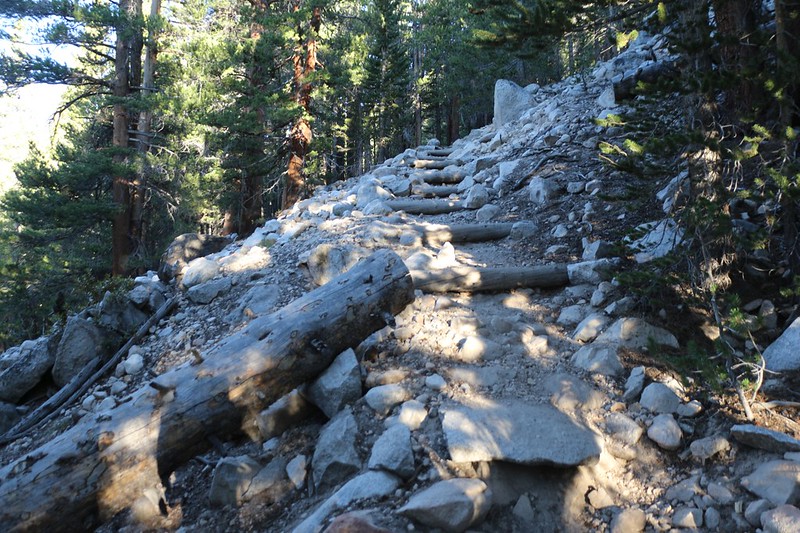 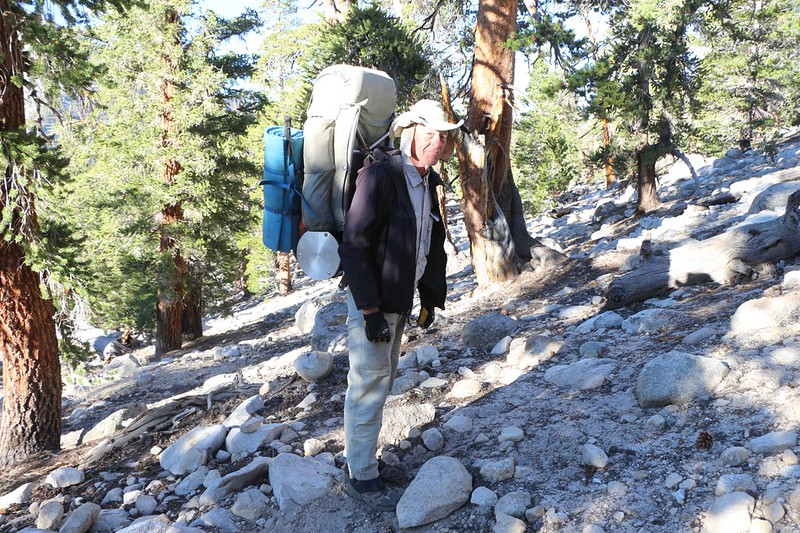 Me and my big pack, with two bear cans! Yes, it was quite heavy – over 60 pounds when we started. Beast Mode!

Once we attained the lip of the steep-walled valley, the trail’s slope lessened.  It headed directly for Guyot Pass, and along the way, we got some pretty good views back the way we’d hiked yesterday, of Mount Anna Mills and the long ridge west from Siberian Pass.  We crossed Guyot Creek, which was flowing well.  The ranger last night told us that it was the only water between Rock Creek and Whitney Creek, but we still had plenty so we didn’t stop.  Ahead of us was Guyot Peak and the low spot to its right, Guyot Pass.  By then the sun was out and the air was getting warmer.  Vicki began to get overheated, and this time we were ready for it.  She got out her spray mister and wet her hair, and shirt, and pants, and legs.  Everywhere, basically.  And it worked!  She was hot, but never approached the danger zone.  (For those who haven’t read other tales in this website, Vicki has a problem with her bodily thermostat, such that she doesn’t start sweating when it’s appropriate, which can lead to heatstroke.)

As we climbed higher, we could see Mount Anna Mills to the southwest 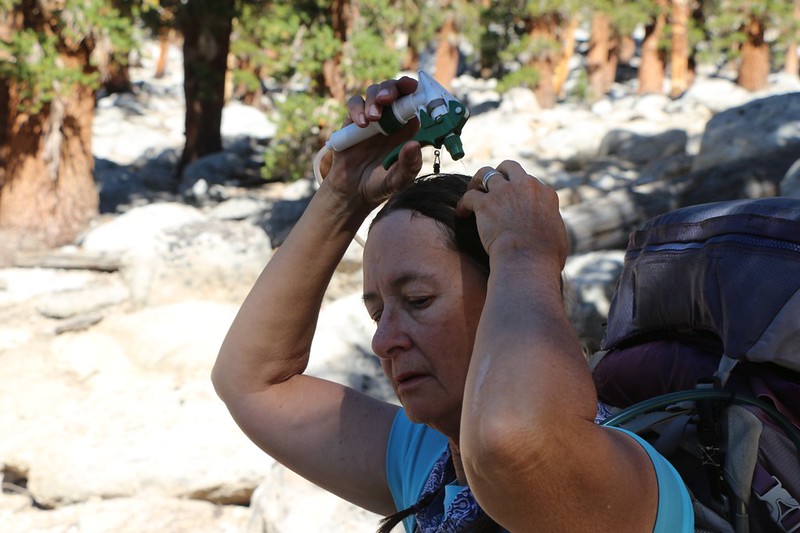 The final climb to Guyot Pass was steep and hot, so Vicki cooled off her head with the water sprayer 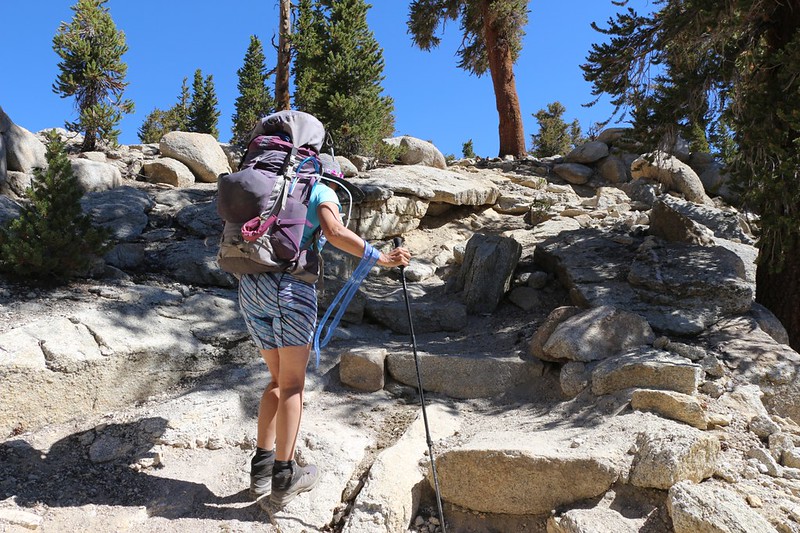 The final switchback leading up to Guyot Pass

We made it to Guyot Pass by 10:30am, and the sun was quite warm.  But we made it, and that’s what mattered.  Vicki decided to reward herself with some lunch and a nice long nap.  There was a pleasant breeze up at the pass, and it was peaceful.  I sat and read my book while Vicki slept.  I didn’t tell her, but we had climbed up to almost 11000 feet elevation again, and her breathing seemed much better.  It appeared that she was finally getting acclimated!  If only time could similarly solve that “thermostat” problem of hers… 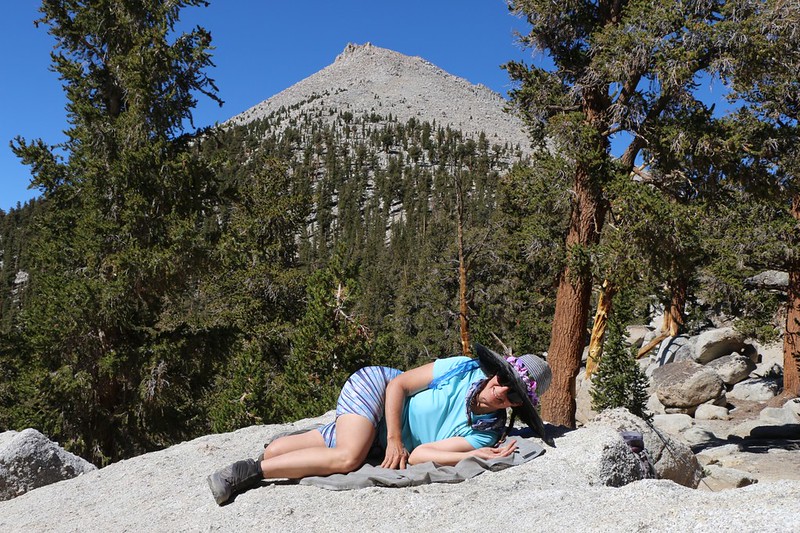 Vicki taking a well-deserved nap on Guyot Pass, with Mount Guyot (12300 feet elevation) behind her

We eventually had to continue on, downhill or flat for the rest of the day, which made Vicki even happier.  The PCT always manages to surprise you with some annoying uphill, even when it’s supposed to be all downhill, but we were used to that.  On we hiked, down from the pass and out along Guyot Flat in the hot sun.  There were some pretty nice views along that stretch, and the hiking was easy. 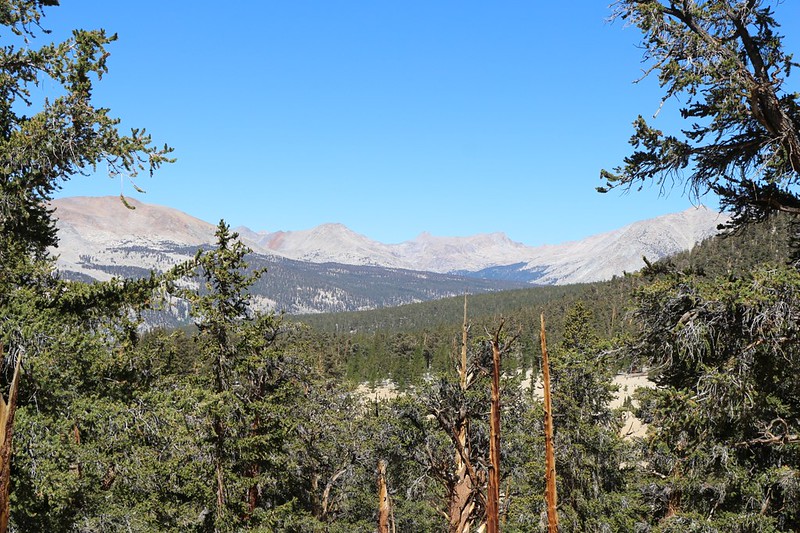 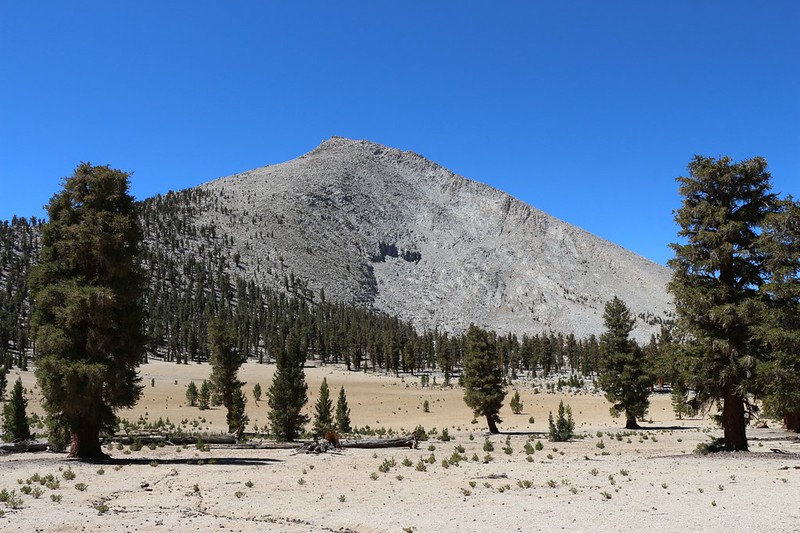 Eventually, we climbed a tiny bit up and out of the Guyot Flat basin and began our final descent toward Crabtree Meadow.  Whitney Creek was down in the bottom of this valley.  We could see a number of peaks toward the east, but we couldn’t quite see Mount Whitney itself.  There was a lot of talus on this side of the valley, and the trail switchbacked ever-downward in the hot sun.  We had less than a mile to hike, but it seemed to be taking forever.  We got hot and grumpy and dehydrated, and there was no shade in which to take a break.  Finally, we neared the end of the talus section and there was a tall boulder with a deep, shady crack.  We took off our packs and the two of us crammed ourselves into the shade.  We drank water and Vicki sprayed her sprayer, but there wasn’t a lot of breeze in there.  Still, it was better than being in the sun. 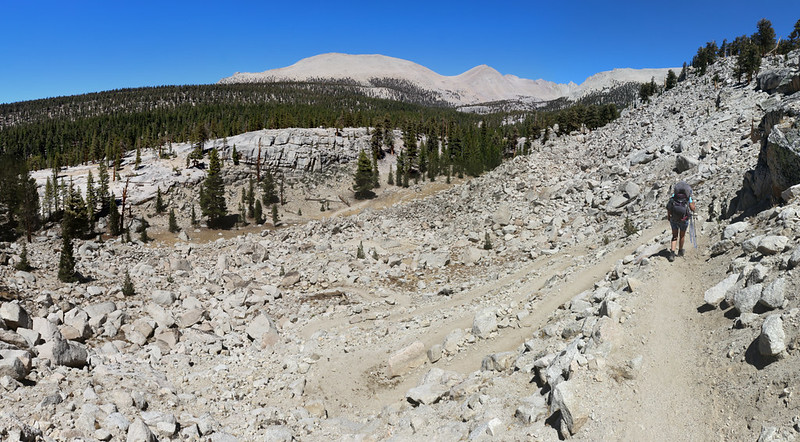 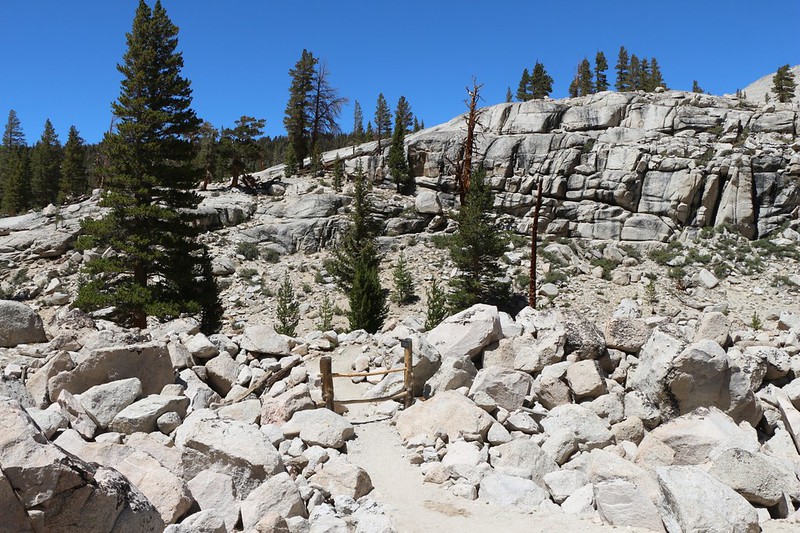 We eventually cooled off, and continued the hike, stepping through the lonely wooden gate that apparently was enough to keep any horses within the meadow area.  But there were no horses, not during 2020, the year of the pandemic.  Soon enough, we were hiking through Crabtree Meadow, looking for a good place to camp.  I knew that the ranger station and the main camping area were further up the valley toward Mount Whitney, but we didn’t want to head that way.  And soon enough our wish was granted, and we found a nice spot not far from the Whitney Creek crossing.  We put down our packs and sat down in the shade.  If anyone deserved a break it was us! 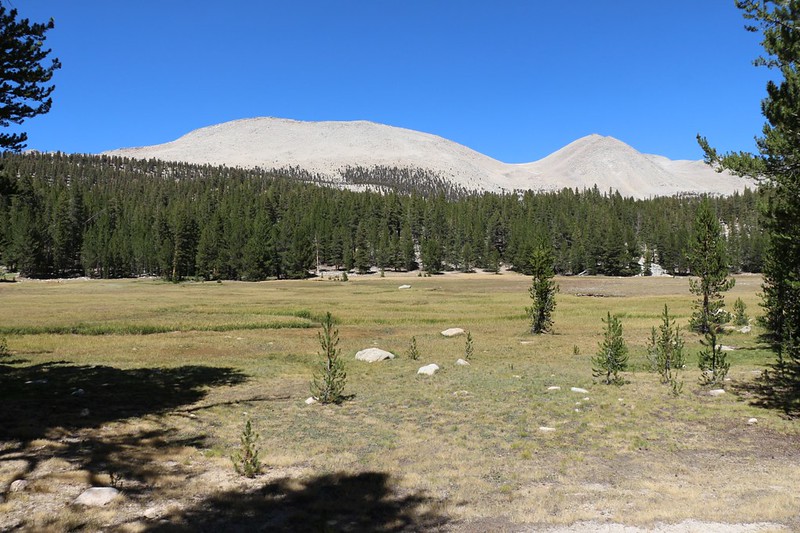 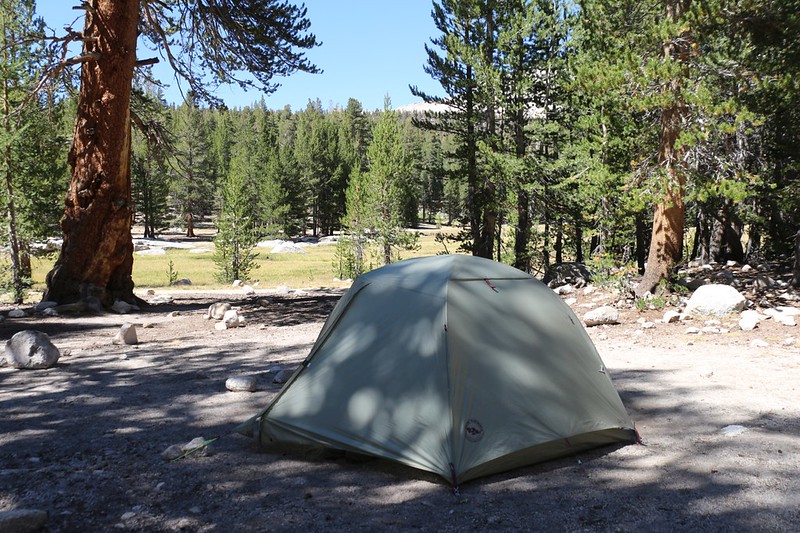 Our tent and campsite at the lower, western end of Crabtree Meadow

It was 3pm by the time we got the tent set up and Vicki had had her usual nap.  She awoke feeling refreshed and we headed down to the meadow.  There, at last, was Mount Whitney!  It didn’t look particularly awesome from the west, I have to say.  From the Owens Valley in the east it was positively awesome, with towering cliffs and spires.  But from here it was just another round-topped granite mountain.  Of course, I knew better from when I climbed it back in 2018.  It’s got a steep and exposed trail, which only gets flat on the very top.  Then you get to experience firsthand how steep the cliffs are on its eastern face. 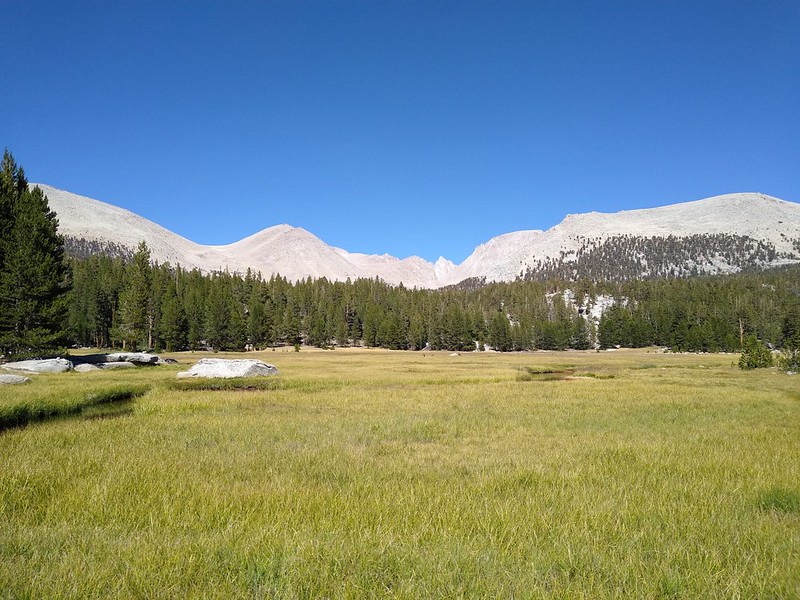 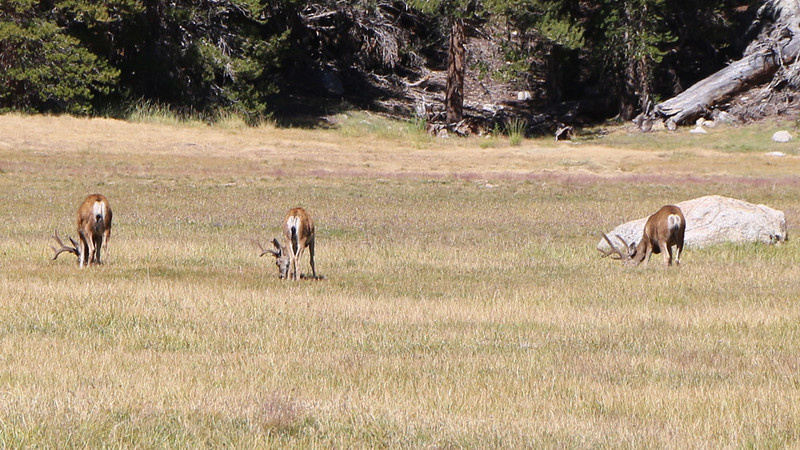 Since we’d been hiking three days already, it was time for us to do our laundry.  You can only wear the same clothes for so long before they start to reek, after all.  So we got some water from the creek, added some camp suds, and voila!  No more stinky!  OK, that’s an exaggeration.  Our bodies still stunk, but the clothing was much better. 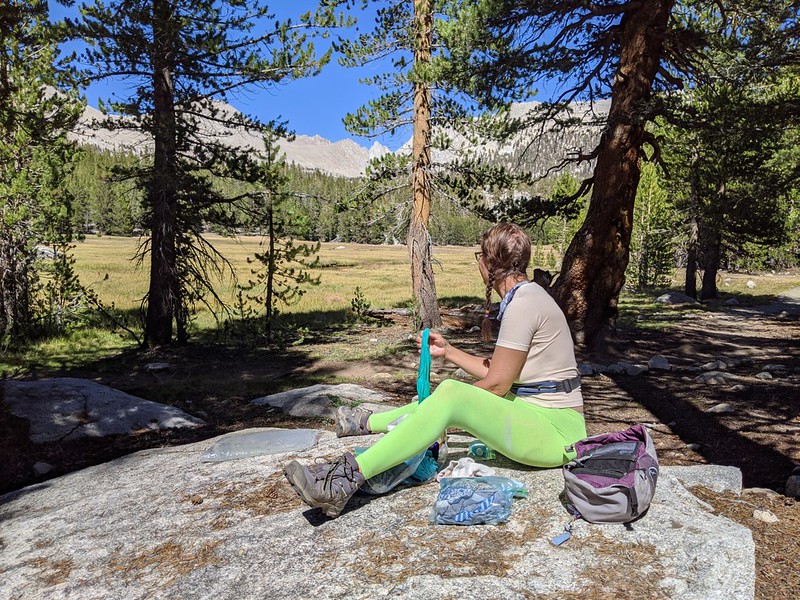 Later on, we cooked dinner in camp, but ate it down by the meadow.  The deer were still out there grazing, and the sun dipped down behind us, leaving a golden light on Mount Whitney.  The angle of light had changed, and the contrast increased.  We were able to see more definition on its westward slope, and it didn’t look round and boring any longer. 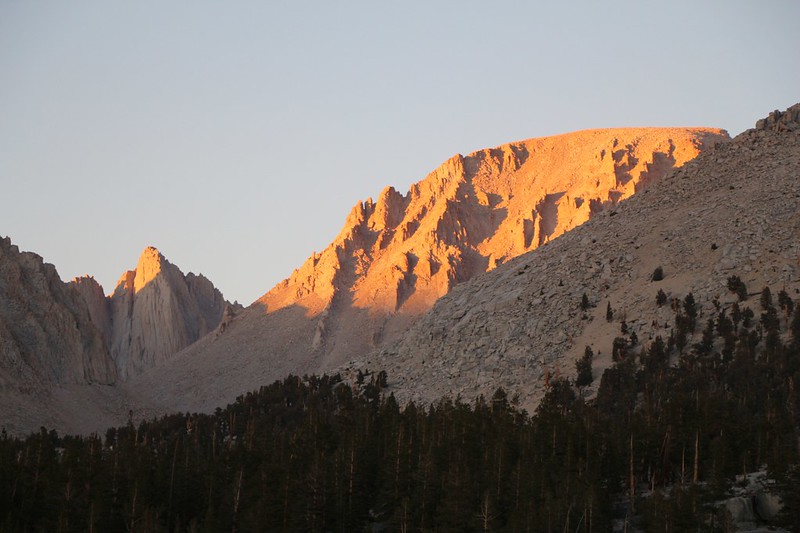 This time there were no cumulus clouds to light up the sky at sunset.  In fact, there hadn’t been any all day, which was unusual in the Sierra Summer.  Maybe there was a change in the weather in store for us.  I liked the clouds for photos, but I wasn’t really thrilled about getting drenched in rain or hail.  I checked the weather report via satellite using my Garmin InReach, and it looked like this break in the clouds was only temporary, and that thunderstorms would be possible for the next few days, at least.  Oh well.  “You can’t change the weather,” as my mother always said.  We were prepared and would deal with it when we had to.

And after that we went to bed.  It had been a good day, and tomorrow would be our easiest day yet.  Four more miles and we’d be at the eastern end of the High Sierra Trail, our main goal for the entire trek.  We were really looking forward to it.