I had been dreaming about hiking the High Sierra Trail since I first heard about it in the late 90’s, but life always seemed to get in the way of making a true effort at getting it accomplished.  Time, kids, work, demands, other vacations – it just never happened.  Possibly the biggest hurdle to completing this popular trail was the need to organize travel to and from each end.  The trail itself was 71 miles long, directly across the Sierra Nevada from east to west, but it was 250 miles to go the long way around by car!  Getting there via public transportation was almost impossible, and hitchhiking would be inevitable.  And uncertain.  My High Sierra Dream was put on an indefinite hold.

But things changed in 2019, when I bought a new car.  Suddenly, Vicki and I had two reliable cars.  And we used them to great effect on PCT sections in Southern California.  Sure, it was a pain to take two cars and shuttle them, but it turned out to be well worth the trouble.  We took some great hikes.  But it wasn’t until late Autumn that my mind was drawn, once again, to the High Sierra Trail.  I had never really forgotten about it.  And so I began to pore over maps, and do research on the internet, and, slowly but surely, a viable plan was formulated.

I knew that it was hard to get a permit to hike through the Whitney Zone, and I didn’t know enough about the permit process in Sequoia National Park, so this made it tough.  The trail officially starts in Sequoia NP, at the Crescent Meadows trailhead, and ends where it intersection the John Muir Trail at Wallace Creek.  49 miles total.  Technically, it doesn’t require that you climb Whitney or descend through the Whitney Zone to Whitney Portal, but it makes life a whole lot easier if you do it that way; that’s the additional 22 miles to make 71 total miles.  Now, I had already climbed Mount Whitney back in 2018, and Vicki categorically refused to subject her lungs to such a high elevation, so this changed things.  I was also much more familiar with getting Wilderness Permits for the Inyo National Forest, on the east side of the Sierra.

In a flash of inspiration, I decided that my best hope of hiking the High Sierra Trail was to start somewhere on the east side and do it backwards, from east to west.  And the best way to get Vicki to hike it at all was to keep the altitude as low as possible.  There would be none of this 14k Whitney nonsense.  Our best hope was to come at it from the southeast, over Cottonwood Pass, and then north along the Pacific Crest Trail.  We would then join the High Sierra Trail at Wallace Creek and hike it backwards! 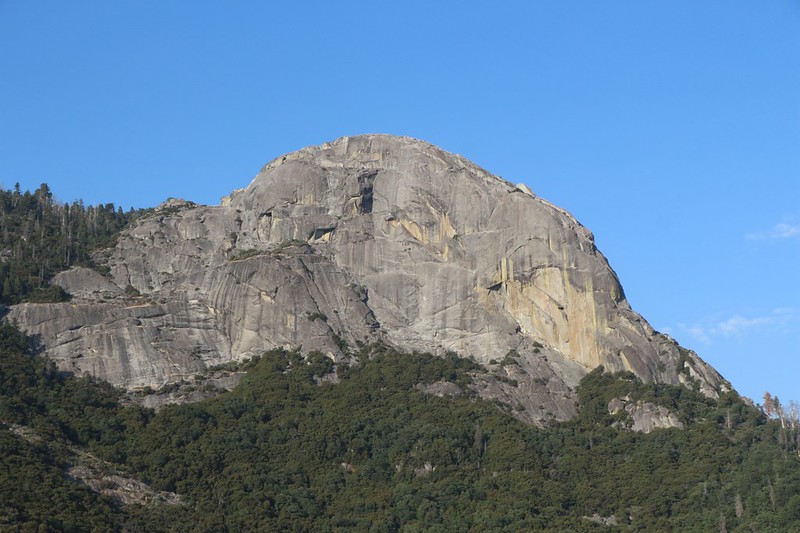 So I made all the plans with Vicki in January 2020, and got the trailhead reservation on February 10th, exactly six months prior to the start.  I had initially planned on 10 days of hiking (which is about the most food we can carry) and Vicki insisted on yet another day anyway.  But that was OK.  I would be happy to put up with some extra weight just to hike this trail!  And then we waited.  For six months.

Then Covid-19 happened.  ALL camping shut down in the National Forests and Parks.  We were seriously bummed.  Then they reopened it when they realized that hiking was not only safe, but healthy.  Then they figured out a way to issue Wilderness Permits via email, and life was good again.  Our trip was still on!  So we began preparing in earnest.  Food, clothes, gear, everything.

We were totally ready when August rolled around.  I had booked a hotel room for the final day not far from Sequoia Park, so we could have showers and comfort.  We even decided to start the car-shuttling two days early so that we could stay additional nights in Horseshoe Meadows, up at 10,000 feet elevation, in order for Vicki to have more time to get acclimated.  And we had a pretty good idea about where we were going to stay for those ten nights on the trail.

We each drove a car and headed for Crescent Meadows in Sequoia National Park.  We left a bit late and got there in the early evening.  We were happy to find a parking spot near the trailhead and left Vicki’s car there, along with some fresh clothing, shoes, and some tasty car snacks (which we placed in one of the big bear lockers).  Success!  Now all we had to do was hike seventy miles to get back to this car. 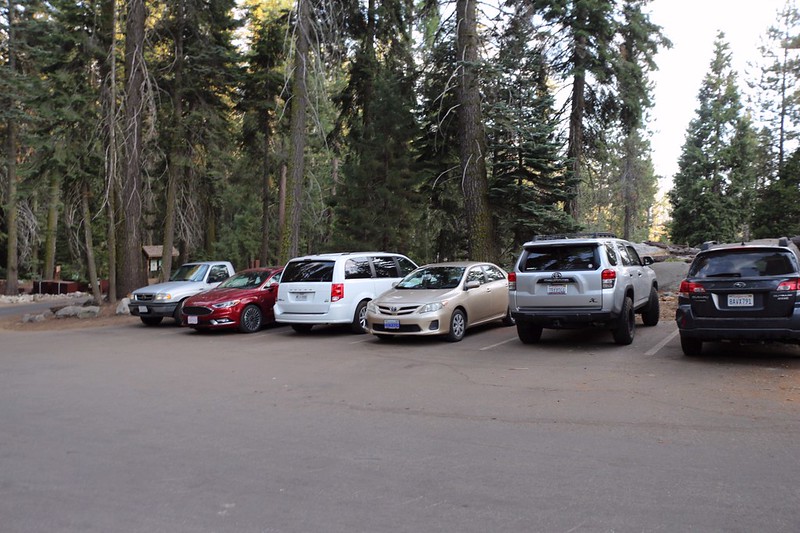 We hadn’t visited Sequoia Park since the late 80’s, so we took a quick car tour of the Giant Forest, and stopped to check out some of the Giant Sequoia Groves.  We didn’t overdo it, partly because we still had a lot of driving to do, but also because the Visitor Center was closed due to Covid.  The park was a bit of a ghost town, but that was OK with us.  We weren’t interested in crowds. 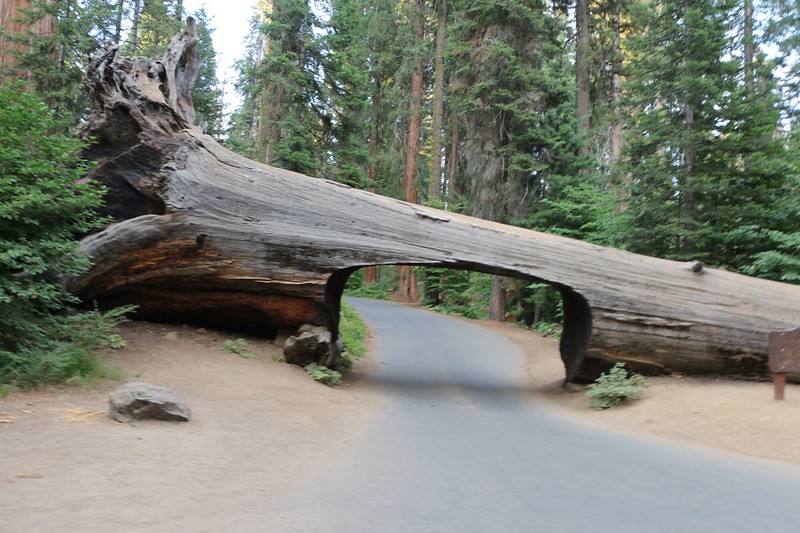 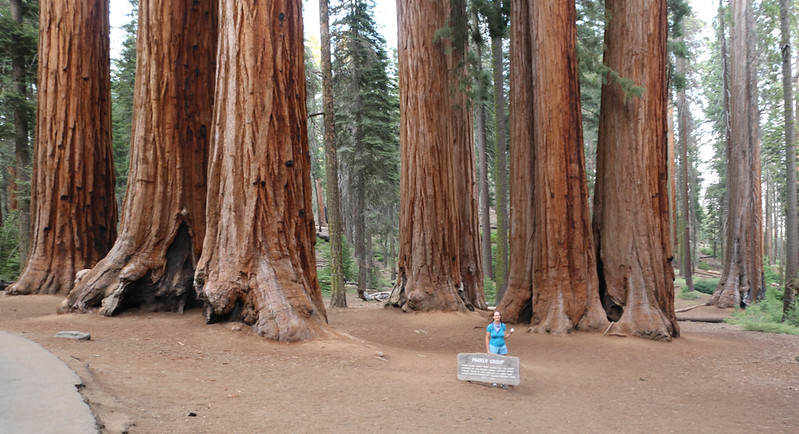 Vicki poses with the Parker Group of Giant Sequoias

All in all, it took us six hours to drive to Crescent Meadows, and another six hours to drive all the way around the Sierra Nevada to get to Lone Pine and the Horseshoe Meadows campground area.  It was an awful lot of driving just to hike a trail, and we knew that once we were finished, we had another six hours to get back to Horseshoe Meadows followed by six more hours to get home.  24 hours total driving.  But we’d be spending thirteen days in the High Sierra!  A worthy trade. 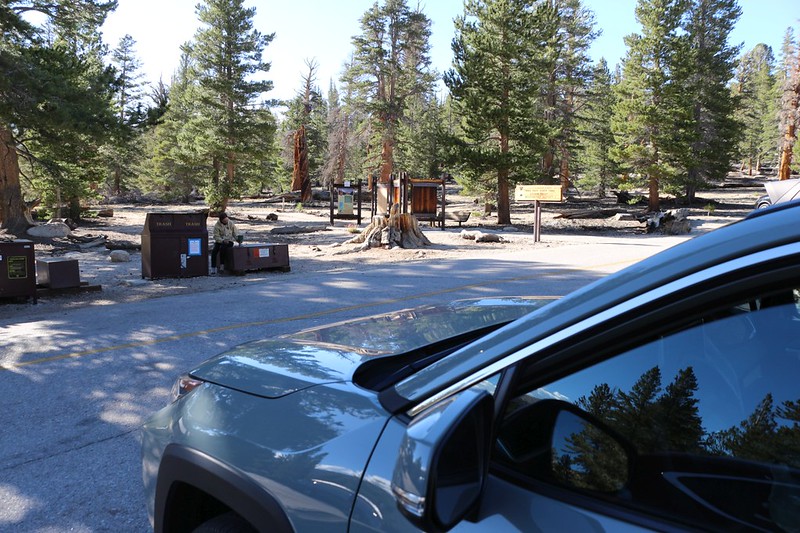 We spent two nights in Horseshoe Meadows in the Rav4, acclimating to elevation at the Cottonwood Pass Trailhead

We were able to sleep inside the back of the Rav4 in Horseshoe Meadows, and that made things much easier.  We ended up spending two days and nights just hanging out at 10k feet.  We day-hiked around the area, and generally took it easy.  Vicki’s lungs were getting stronger, and that’s what really mattered.  On the first day she didn’t hike very far before feeling tired and headachy, but the next day she did much better.  Both of us were feeling much more confident about the following day, when the main hike would begin.  We had to hike four miles and climb an additional 1300 feet to 11,300 feet elevation, and we knew it wouldn’t be easy.  But Vicki was willing to do her best, and that’s all that really mattered.