Day 1:  We backpacked from Onion Valley to camp at Flower Lake and also visited Matlock Lake

I’ve been hiking with Vicki for a lot of years now, and I have a pretty good idea of what the two of us are capable of doing.  So I plan our trips accordingly.  If there’s high elevation involved, acclimation is a major factor.  I try to get Vicki up there in stages, so she can breathe more easily.  If there is a lot of elevation gain on a potential hike, I try to limit it to 1500 feet, 2000 max, so she won’t run out of energy.  If there’s too much steep downhill, her knees might get damaged.  I also try to keep the total distance to an average of five to seven miles per day, depending on the elevation changes, etc.  We’ve been known to hike fifteen miles in a day, but that only happens on a smooth, gently-sloping downhill trail.  If there’s a lot of climbing, we try to wake up before dawn and do it in the cool of the morning.  And, in California, we always have to put the proposed camping spots near water.  Let me tell you:  That’s a lot of constraints!  It’s not easy.  Believe me when I say that these trips don’t plan themselves!  But I’m getting better at it nowadays.  And it’s all worth it in the end.

Anyway, that entire process was applied to this week-long trek, and that’s why our first day’s hike with full backpacks was only going to be three miles long, with about 1500 feet of elevation gain.  The next realistic stopping point with water was three miles further and another 1500 feet higher (followed by an 1100 foot descent), and I knew that Vicki would never be willing to do it.  I did it the year before, on my Whitney trip, and it had been pretty tough, even for me.

So today would be an easy day.  We’d start off on a mellow foot.  Tomorrow would be much tougher, but that was OK, because it was tomorrow.  Today was going to be fun. 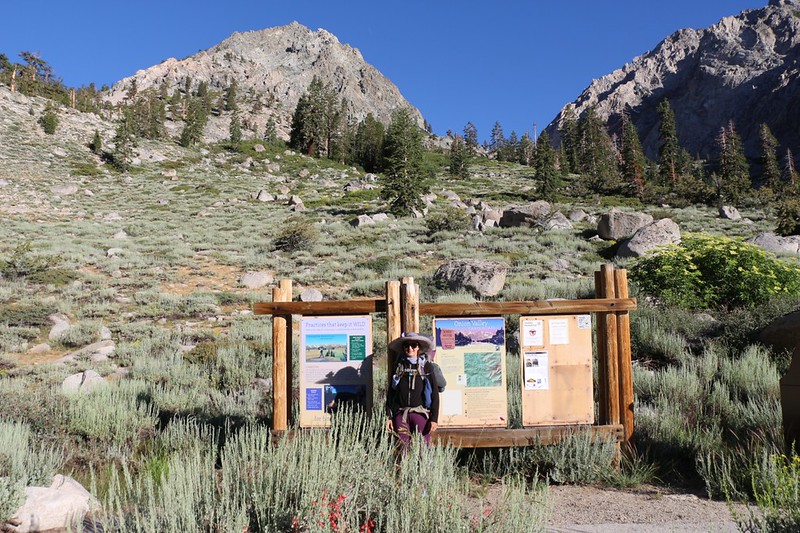 We ate a good breakfast and packed up our gear, doing some final sorting and arranging on the picnic table in the campground.  We had some items that would spend the week in the car, and some food that would spend it in one of the trailhead bear lockers.  Whatever was in our packs would have to be enough.

We took a few photos at the trailhead, then began the long climb up the switchbacks in the sun. 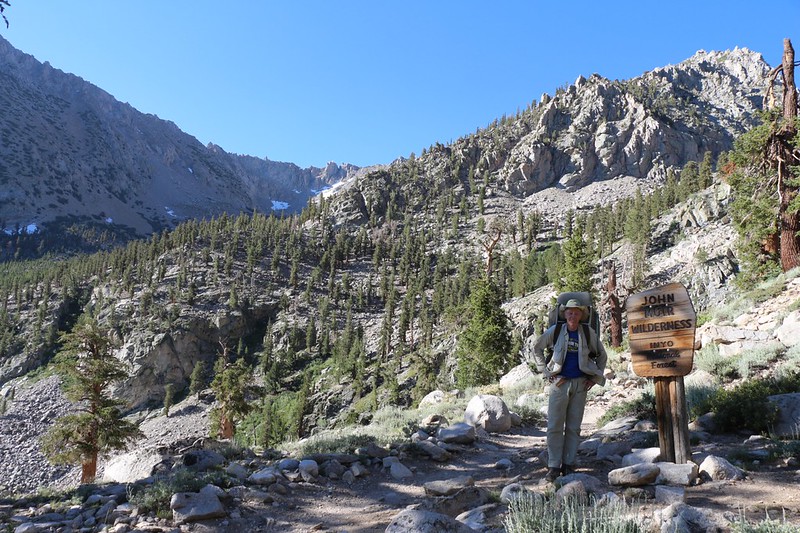 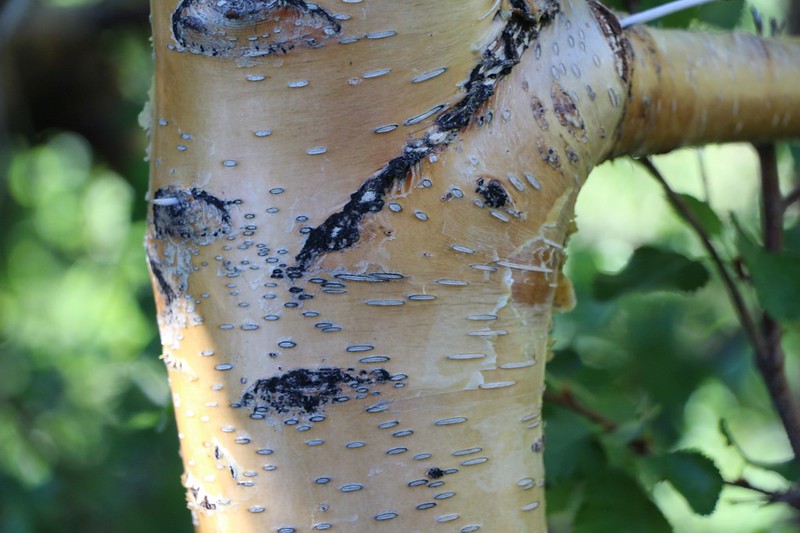 Texture on an Aspen Trunk as we passed through a grove

It was cool when we started, at 7:30am, but soon it grew warm.  We paused often in the shade of trees, and contemplated the view back east, down into nearby Onion Valley, and to the Owens Valley a mile below.  We took plenty of rests and stopped whenever we felt like it. to check things out, or to eat some snack.  Vicki even took a nap or two along the way.  It was all part of the plan. 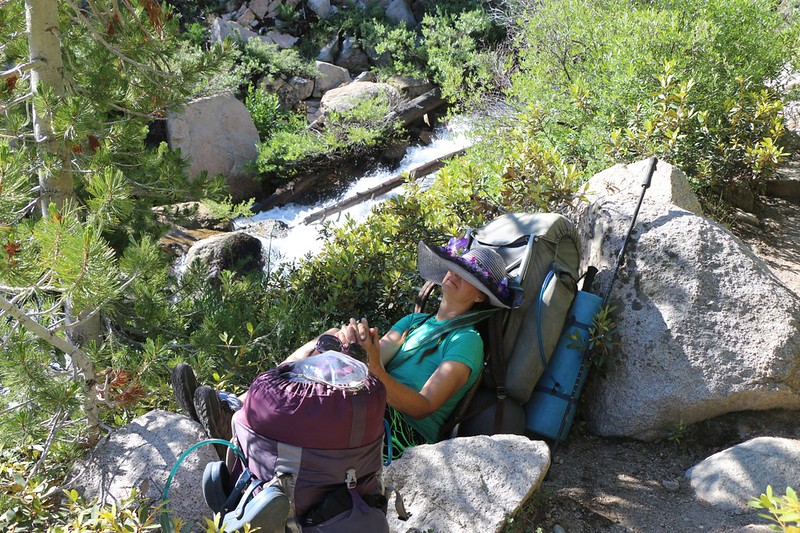 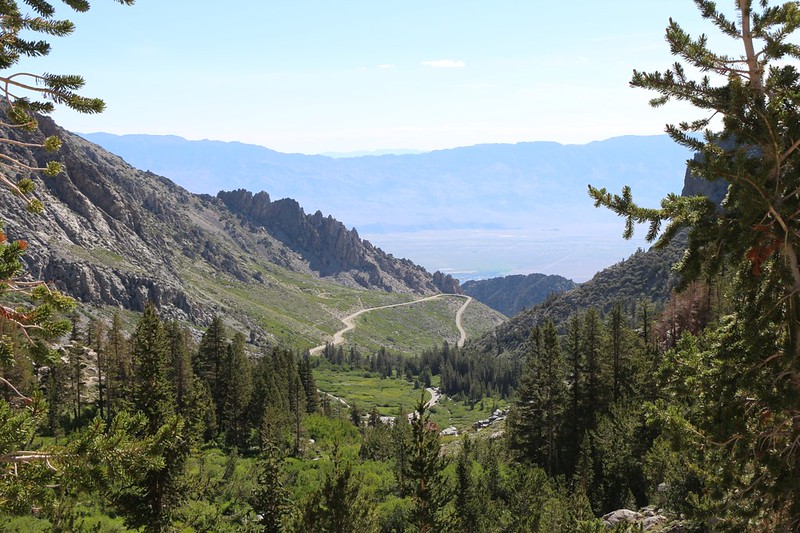 We made it to Little Pothole Lake, with its twin waterfalls, and took another break.  We were now at 10,000 feet elevation, about two-thirds of the way to our destination.  We only had one more set of hot sunny switchbacks to hike and the climbing part of our day would be over. 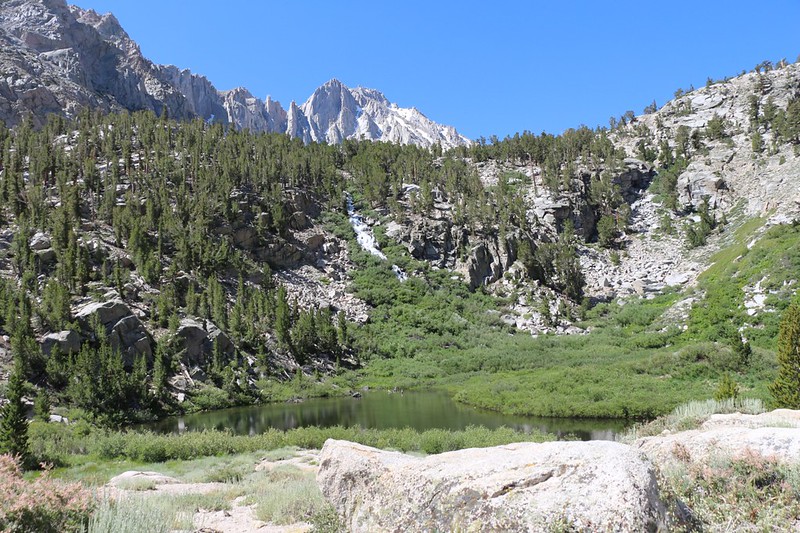 Little Pothole Lake has two waterfalls entering it, with University Peak in the distance

Panorama south with Independence Peak on the left

Once we were at the talus field before Gilbert Lake, I sent a last few photos and texts out to family and friends.  We wanted to make sure they were properly jealous while they were stuck at work all day.  This was the last spot for cell reception for the next seven days, and also our last view of the tiny town of Independence far below.

After that, it was onward into the wilderness.  Next stop:  Gilbert Lake.

This lake was absolutely beautiful, with deep blue water and plenty of big trout swimming along the shore.  University Peak began dominating the views to the southwest.  At the upper end of the lake was a huge flat-topped boulder, and we met some other hikers there.  Everyone who hikes this trail stops on that rock.  It was a perfect place for a photo-op, so we got ourselves in a posed picture while we had the chance. 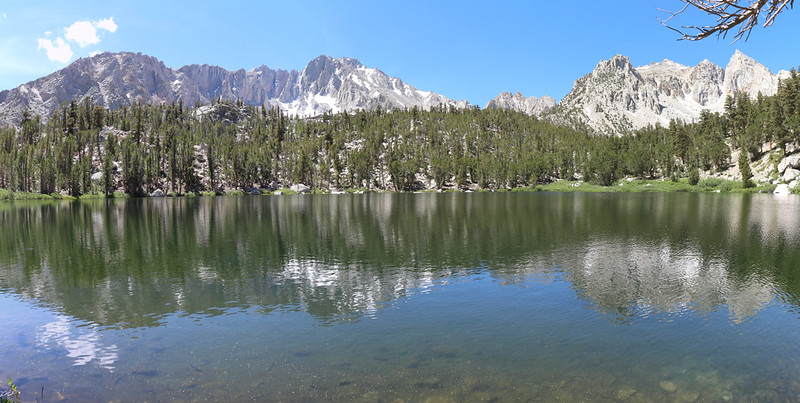 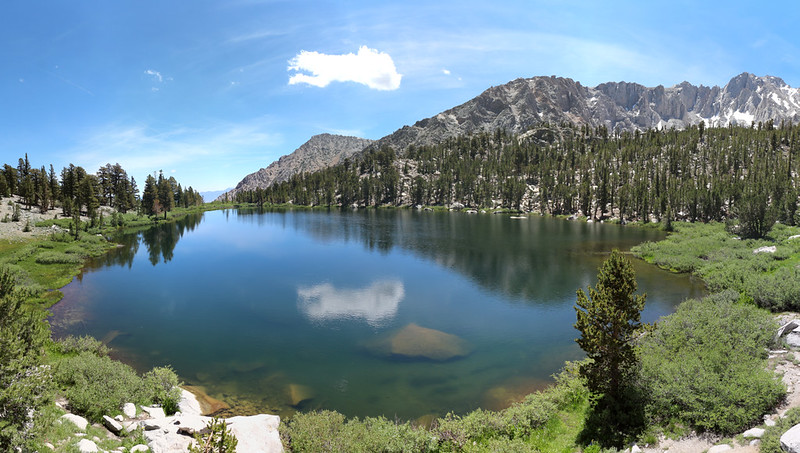 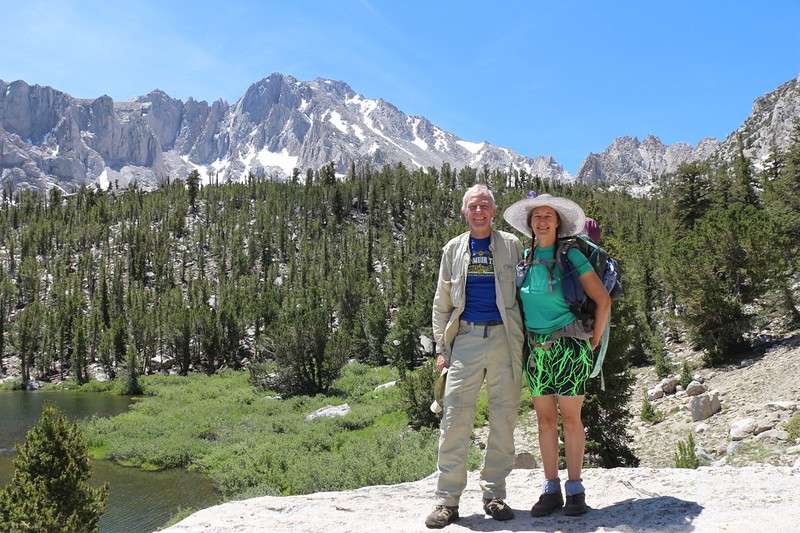 Then we picked up our packs and headed upstream to Flower Lake.  We took the Matlock Lake Trail across the creek and around to the south side of the lake.  We were the only ones there, and there were several really nice campsites along the shore.  We chose the site with the flattest “cooking rock” that would support our stove at a comfortable height.  Vicki loves a well-ordered kitchen.  We set up the tent and inflated the air mattresses.  Then, since it was just a bit past noon, we ate some lunch and promptly took a nice long nap.  It had taken us five hours to hike three miles, which wasn’t bad, considering that our packs were fully weighed down with a week of food. 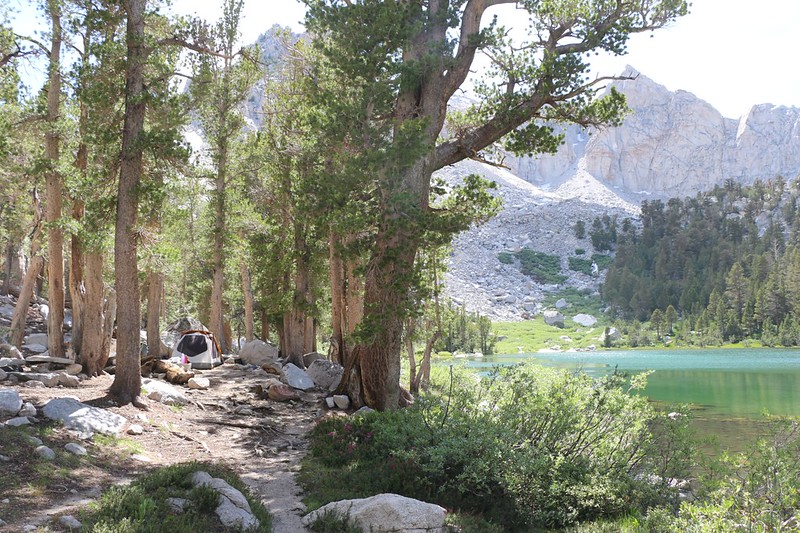 Our tent and campsite at Flower Lake

It was still early, so we decided to take an extra day-hike over to Matlock Lake.  We had been here before, back in 2016. but that time we didn’t take the official trail, so today’s route was much easier.  There was even a bit of snow along the way, which made Vicki happy, although it was late enough in the day that she didn’t need to put any in her hat to cool down.  As expected, we met no people on this hike.  If you’re looking for solitude, this is the place to go.  Unless you’re looking to go fishing, that is, because the trout were removed several years ago to help restore the frog population.  But all we wanted were the views, and there were plenty. 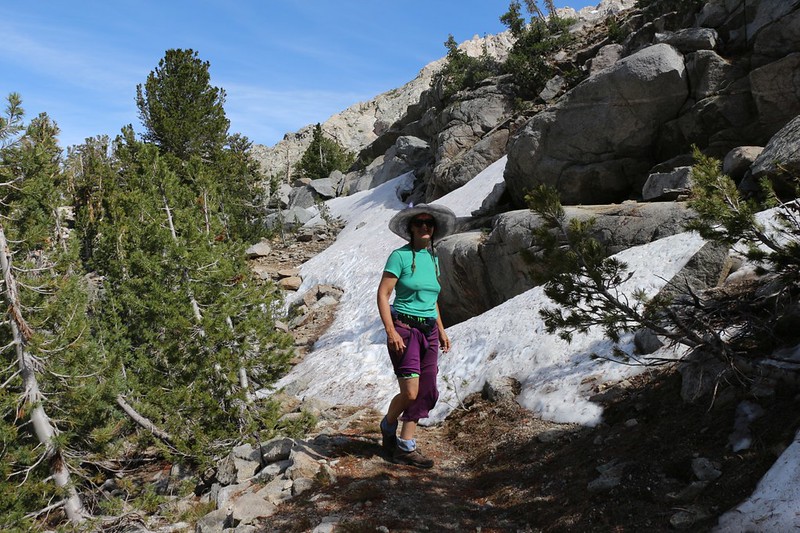 Panorama view of Matlock Lake with University Peak behind it 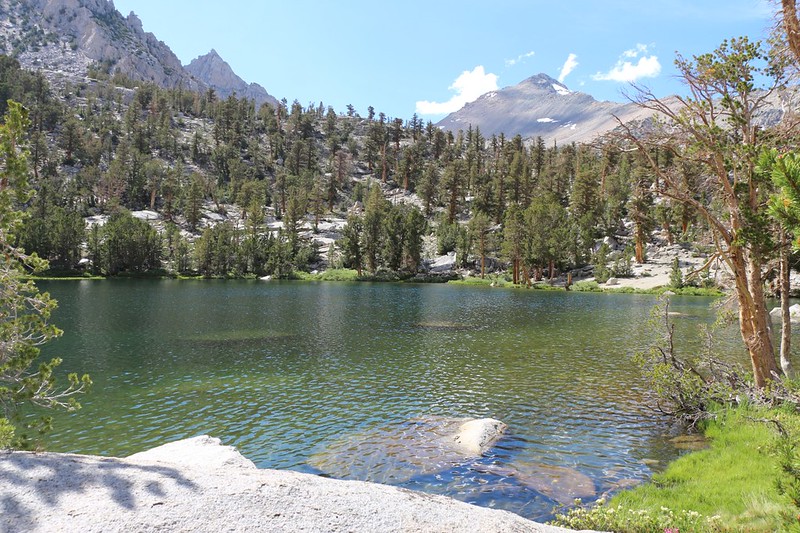 View from the east side of Matlock Lake, with Mount Gould right of center

We didn’t stay long at Matlock Lake, and on the way back, climbing over the ridge, we had our first view of Kearsarge Pass, our initial goal on tomorrow’s big hike.  It was a notch on the southern ridge of Mount Gould, and was nearly 12,000 feet high.  Vicki was hoping that another night spent sleeping at high elevation (Flower Lake was at 10,500 feet) would be enough to get her lungs up and over that pass. 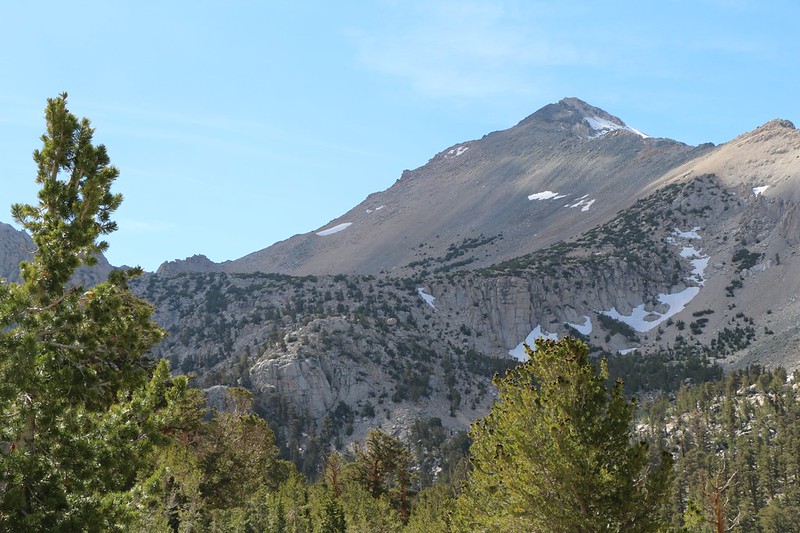 Zoomed in view of Kearsarge Pass on the left, with Mount Gould on the right, from the Matlock Lake Trail

We arrived in camp and Vicki whipped up some dinner.  We ate it while sitting near the shore of the lake.  It was quite scenic, and there were hardly any mosquitoes, which amazed us.  We watched the trout breaking the surface as they caught their own meal of hapless insects.  All too soon, the sun descended behind the Sierra Crest and the temperature started to drop. 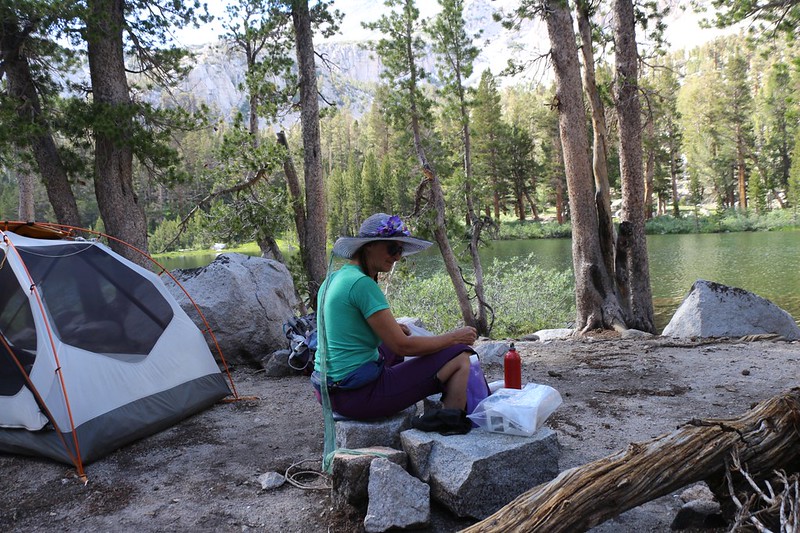 We headed back to the tent and got dressed in our warm layers.  Then we packed up the stove and kitchen and got the tent ready for the night.  Our plan for tomorrow was to wake up well before dawn, eat a non-cooked breakfast, and hit the trail before the sun came up.  We had a long, tough day of hiking ahead of us, and we wanted to get up and over the pass in the cool of the morning.  Not every day could be like today, with lots of rests and naps and easy day-hikes.  But I was fairly certain that there would be more than one nap in store for Vicki tomorrow, so I wasn’t worried at all.