Day 0:  We day-hiked to Robinson Lake from the Onion Valley Campground

I call this “Day Zero” because it was technically the day before our week-long trek was to begin.  It just wouldn’t be right to call the day we started “Day Two.”  And having two “Day Ones” is absurd.

Anyway, we left San Diego before dawn, as usual, and arrived at the Ranger Station in Lone Pine in the morning.  We picked up our Wilderness Permit for the next day’s hike, then headed north to the town of Independence.  We hung a left and climbed up and up a winding two-lane road until we reached the picturesque dell in the Sierra known as Onion Valley.  It was situated at 9,000 feet elevation, and we had a reservation for a campsite in the tiny campground.  This extra day, Day Zero, was meant to give us additional time to get acclimated to high elevation before the big hike, in which we would climb up and over two 12,000 foot passes.  Plus, it gave us a chance to visit Robinson Lake, which we would otherwise never visit, since the trail didn’t proceed any further beyond the lake itself. 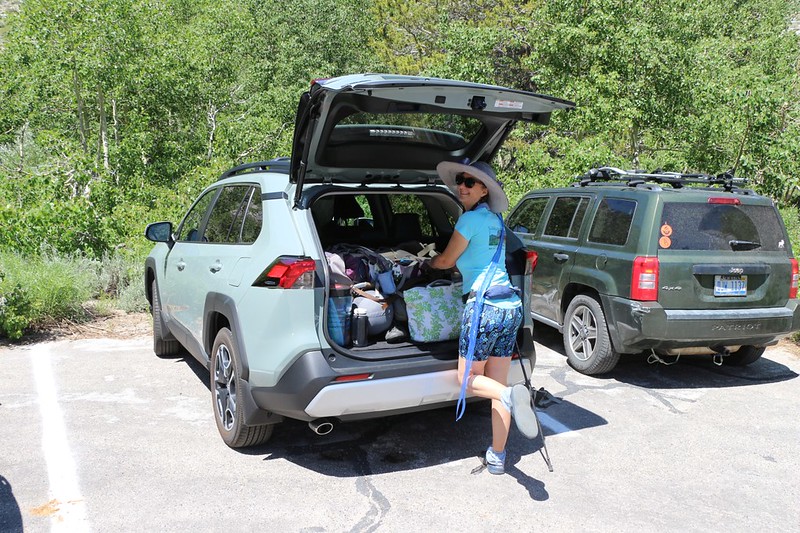 Our daypack was mostly ready, so we put an additional few essentials inside it and walked over to the trailhead.  We figured to set up camp later, and left the big packs in the car.  The trail began inside the campground itself, and it was a real challenge in the beginning section.  To start, the sign for the trail was missing!  And then we had quite a bit of trouble finding where it crossed the creek, mostly because there were too many trails.  All of them made by other lost people, no doubt.  Luckily for us, a group of hikers arrived from up above, and they gave us some hints which set us on the right course. 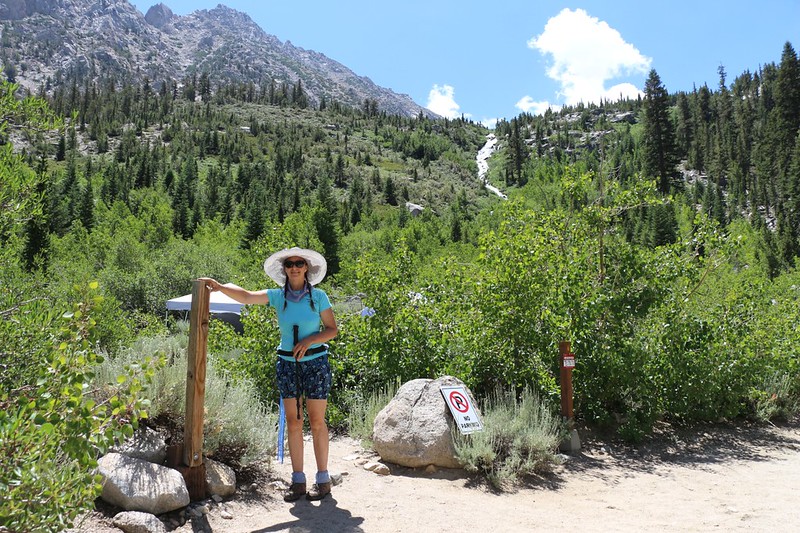 The sign was missing at the Robinson Lake Trail trailhead

After that, the trail was fairly easy to follow.  It went up directly uphill, parallel to the creek, and along the way we were provided with great views out over Onion Valley.  We could see Kearsarge Peak across the way, and Independence Peak was directly above us.  We met several folks coming down from the summit, and they said that it was a fun climb.  As we got higher, we even came upon some residual snow from last Winter, and Vicki put some in her hat to stay cool.  The path roughly followed the rushing creek that flowed out of Robinson Lake, but it stayed well out of the thick vegetation in the drainage.   All told, the trail was about 1.4 miles long, and we climbed about 1400 feet, so it was a solid workout, and good training for the trek to come. 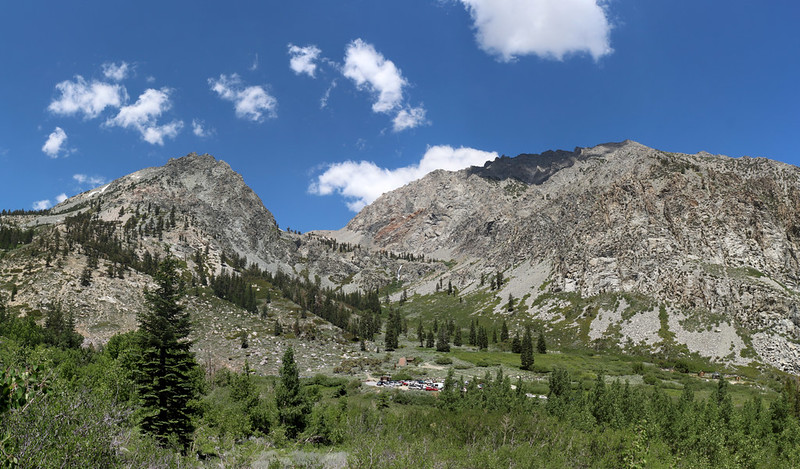 Looking northwest over the Onion Valley Parking area from the Robinson Lake Trail, Kearsarge Peak on the right 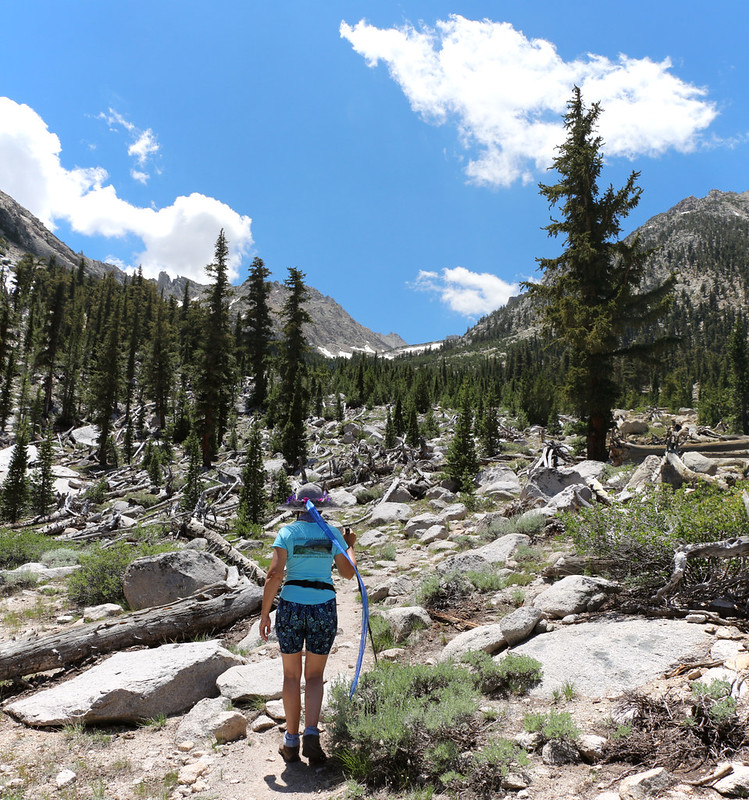 The Robinson Lake Trail was faint but followable, as it is relatively untraveled 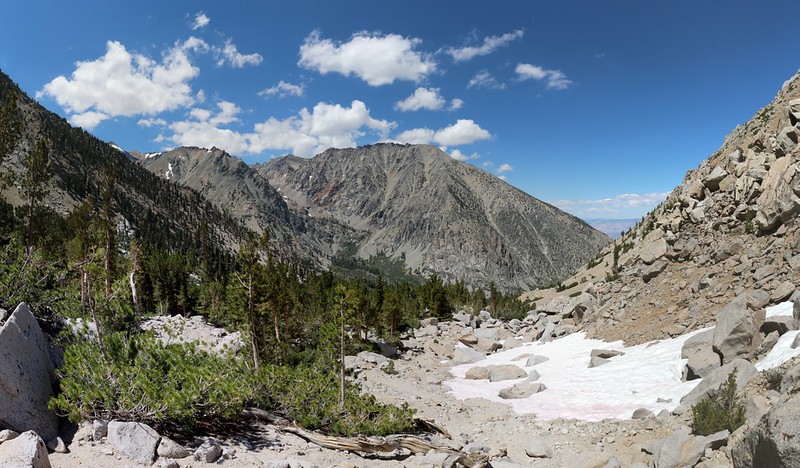 We took a good long break after we reached the lake.   We ate some snack and enjoyed the view.  There were plenty of snowbanks still melting, and water was gushing down from further up the valley, where we could see the sharp ridge of the Sierra Crest to the southwest.  I took a bunch of panorama photos and videos, of course.  The clarity of the water was extraordinary, and the color of the lake’s bottom was an interesting shade of turquoise, similar to the blue ice of glaciers.  We had the lake all to ourselves, and it was very peaceful up there.

But soon enough, it was time to go.  It had been a very long day (we woke up at 2am) and the afternoon was getting on.  We still needed to set up camp and eat dinner.  So we headed back down the trail.  And the views were just as fine.  Not long after we started, we met a man and his son coming up, and they hadn’t realized how tough the trail was.  They were ready to quit.  So we told them that it wasn’t much further and they continued on.  They caught up to us on the way down, and we all agreed that what we expected to be a simple two-hour hike had turned out to take closer to five hours!  But it had been worth every minute. 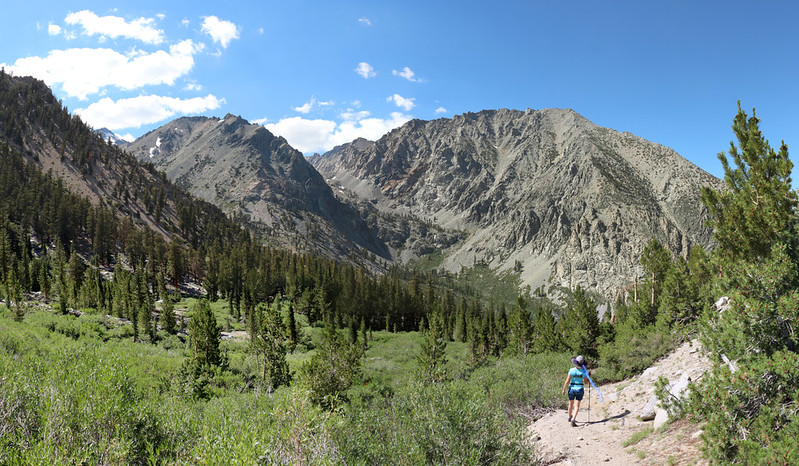 We made it back to the car and unloaded our gear, then carried it to the campsite.  It was a “Walk-In” and situated right next to Independence Creek.  It had a bit of privacy, and the sound of the creek prevented us from hearing the other campers (noisy neighbors are just one of the downsides of busy campgrounds), so it was just perfect.  We set up the tent and Vicki began making dinner while I got the pads and sleeping bag arranged.  Then we ate our evening meal, sitting like civilized people at an actual picnic table!  This was true luxury for backpackers like us. 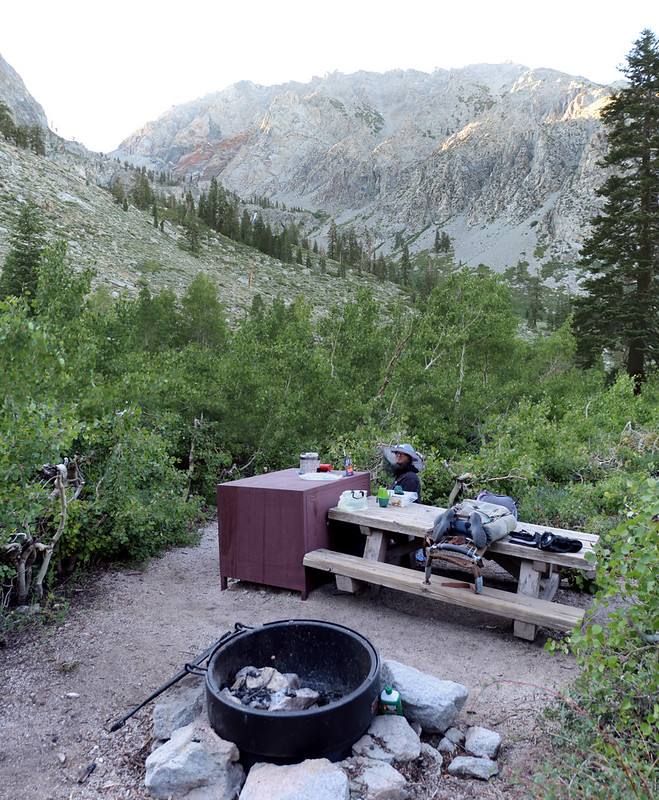 Afterward, we went back to the car and drove it down the road to the main parking lot, and found a newly-vacated spot right near the trailhead.  Excellent!  When we hiked back down the trail a week from now we’d be happy the car was so close.  We took a short walk after that, a quick stroll around the tiny Onion Valley Campground, and then headed into the tent before sunset.

We’d done what the Everest hikers do to get acclimated to elevation as quickly as possible:  “Hike High and Sleep Low.”  Tomorrow morning we’d be hiking even higher, so we hoped that our bodies would be ready for it.  We knew that our minds were prepared:  This was going to be a beautiful trip, to one of the loveliest spots in the High Sierra.  All we had to do was keep on hiking.