The alarm went off at 4am, well before dawn, and we began the slow process of waking up and packing.  Actually, we packed about as fast as we could, but the fact of the matter is that we were slow packers.  Also, it was very comfortable inside our warm sleeping bag, while being cold and dark outside.  But we managed to get dressed and pack up the gear eventually.  All it really takes is to keep busy and focused, and before you know it you’re ready to go.

The last thing we did was get out our no-cook breakfast and power down some carbs.  We’d be needing them soon, because the trail was going to climb 1300 feet over the next two miles, up to the top of Kearsarge Pass. 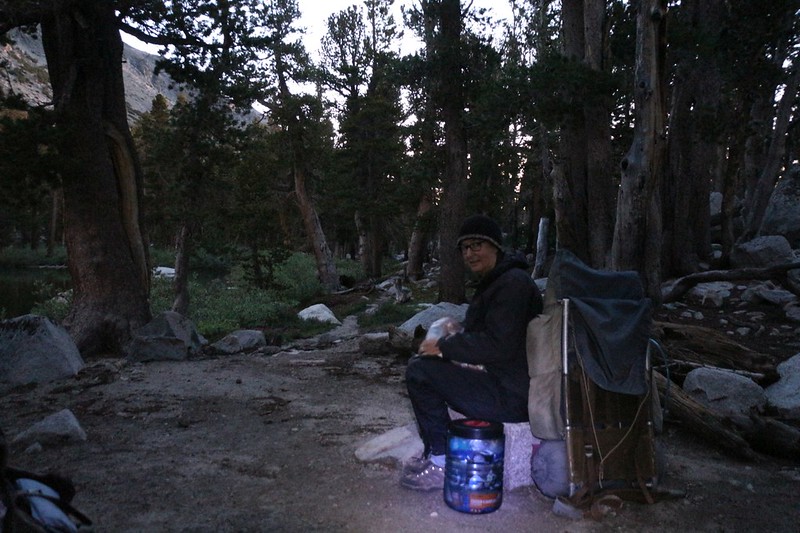 Dawn Alpenglow panorama over Flower Lake, with Mount Gould on the right

The sun rose as we hiked up the switchbacks above Flower Lake, shining reddish light sideways through the trees.  The weather was still cool, but hiking uphill began warming us, and we had to peel the outermost layer on our legs and unzip our jackets.  We got cold if we stopped, so we didn’t stop very often, and we made good time.

There were a couple of sections of trail on the way to Heart Lake that still had residual snow on them, and the snow had frozen solid during the night.  It was positively icy, hard as a rock, and on a steep slope.  So we stopped and I took off my pack.  I dug down inside and brought out the two sets of Microspikes that I was carrying.  I had been expecting to need them on the north side of Glen Pass, up at 12,000 feet elevation, where I had heard that the snow had yet to melt.  I certainly didn’t think I’d need them down here, on a south-facing slope at 11,000 feet, but I was sure glad I had them.  The snow got slushy as it melted in the sun each day, but the cold air re-froze it every night.  So we put them on and walked with confidence across the snowdrifts.  And we took them off again soon after. 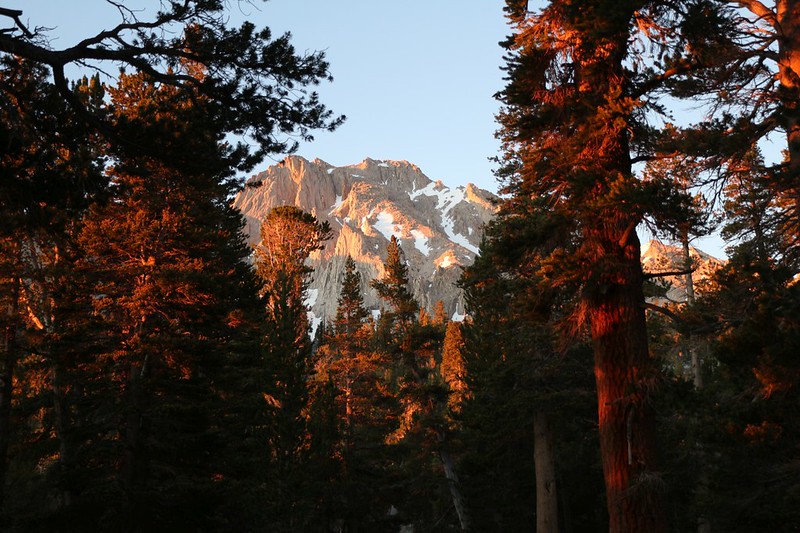 Morning light through the pines near Flower Lake 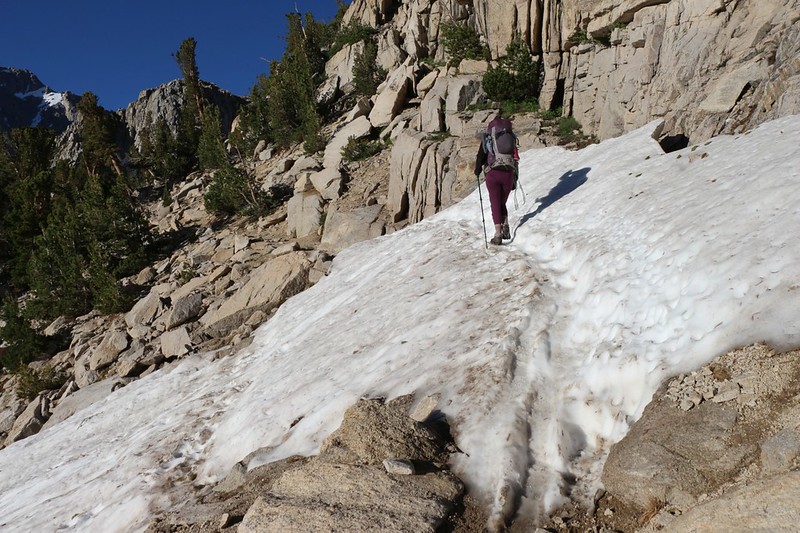 The trail continued switchbacking upward for nearly 800 feet before it surmounted the headwall above Heart Lake.  And the annoying part is that you never get anywhere near Heart Lake itself, which stays maddeningly far below the trail.  I hiked down to it once, years ago, to get some water, but we were prepared for that today.  The last water on this trail was at Flower Lake, where we camped, and the next was over the pass and down into the Kearsarge Basin.  So we took some photos of the lake and hiked onward, taking a final look back east, down the valley toward Gilbert Lake. 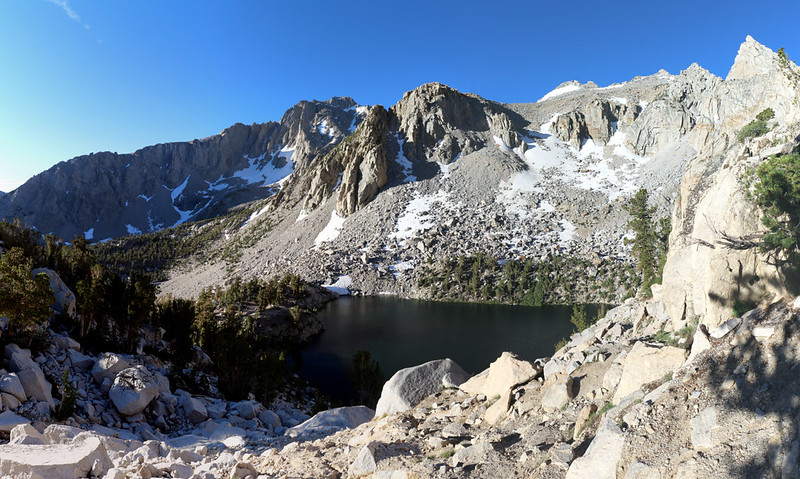 View of Heart Lake down below us 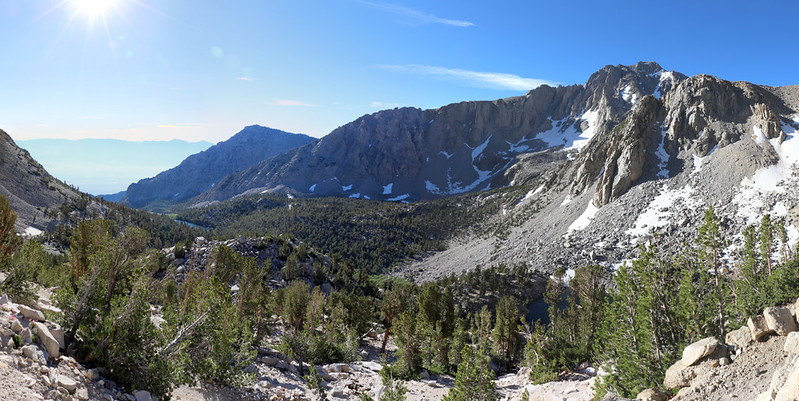 After that, the trail made a few huge switchbacks and headed upward along the giant scree-slope of Mount Gould.  It passed high above Big Pothole Lake.  Situated up at 11,257 feet, the lake was still in the process of thawing out from last Winter!  I had been checking up on the lakes from satellite images, and three weeks before this it was still completely covered in ice.

I took a lot of panorama photos along this section of trail, partly because taking pictures gave me an excuse to stop and take a short rest!  This was a tough trail.  Luckily for us, there was a nice breeze blowing, so we weren’t overheated as we approached our first goal of the day:  Kearsarge Pass.

University Peak on the far left, with Big Pothole Lake down below us 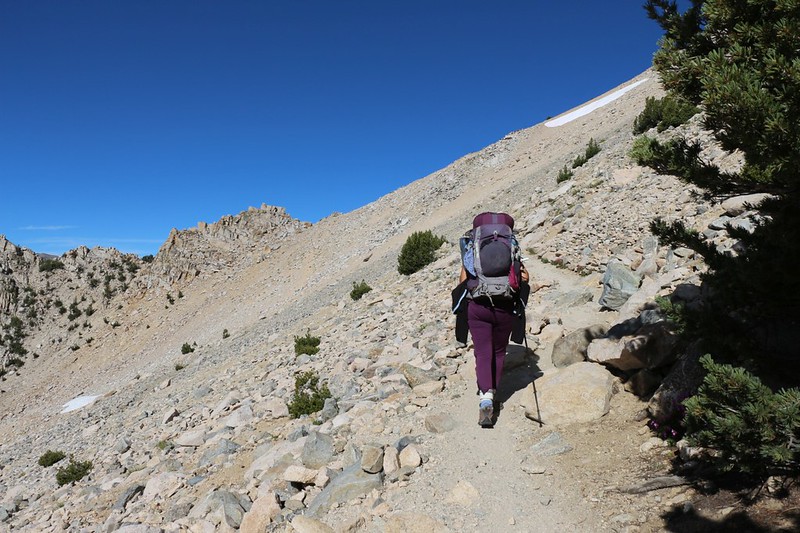 This is the final climb to Kearsarge Pass, and the air was still cool at 8am, so we were glad we started early 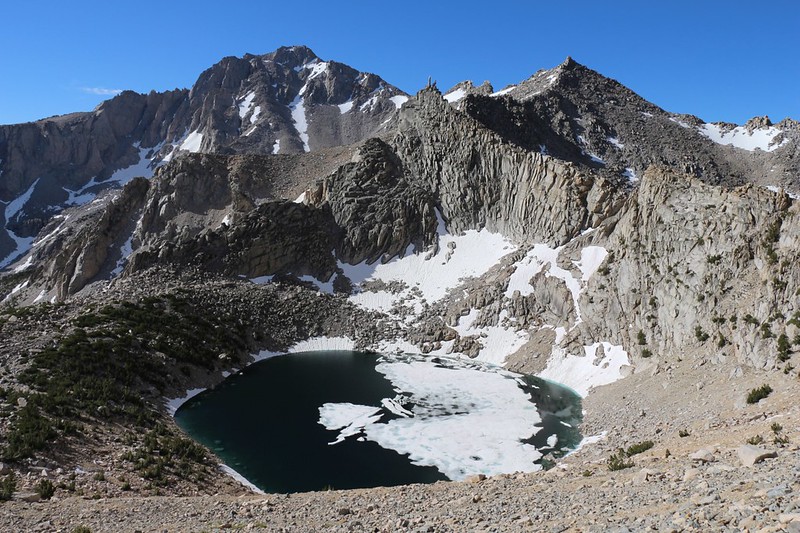 University Peak and Big Pothole Lake, which was still melting out in mid-August!

Kearsarge Pass, at 11,760 feet elevation, is an awesome spot.  The views, both east toward Onion Valley and west into the Kearsarge Basin, are extraordinary.  I took tons of panorama photos and videos, but I can only show a few of them here.  Vicki took a well-deserved rest in the sun, out of the chilly morning breeze, and we ate some snack while we admired the view.  It was good to be up here this early, because we had the place to ourselves.  Most of the time there’s a small crowd up here, because everyone who passes by stops for a long break, and we were no exception.  But we were also the only ones who started hiking before dawn.  The early bird gets the solitude. 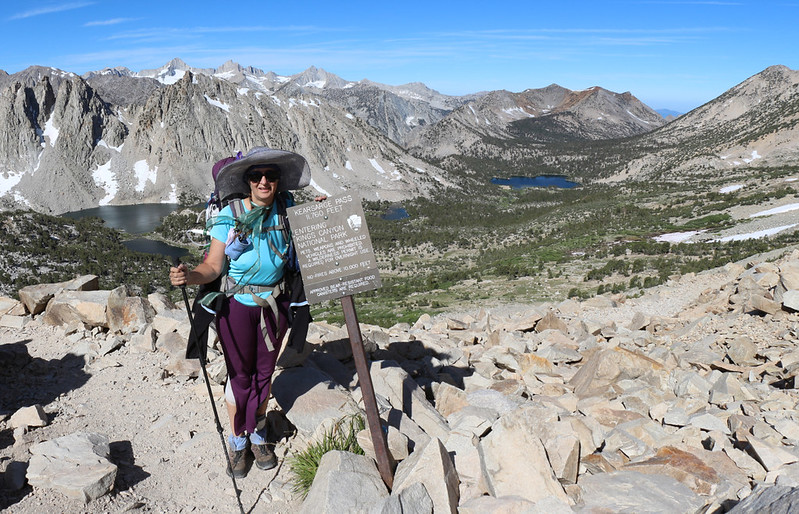 Panorama view east from Kearsarge Pass, with Big Pothole Lake down below

Panorama shot of the Kearsarge Basin from just below Kearsarge Pass

Now it was time for the fun part of the hike:  Heading downhill!  After one last look east to Kearsarge Peak, we zig-zagged west, down from the Kearsarge Pass, into the Kearsarge Basin, with continuous views of the Kearsarge Lakes and the Kearsarge Pinnacles.  Not a whole lot of imagination was used when naming things around here. 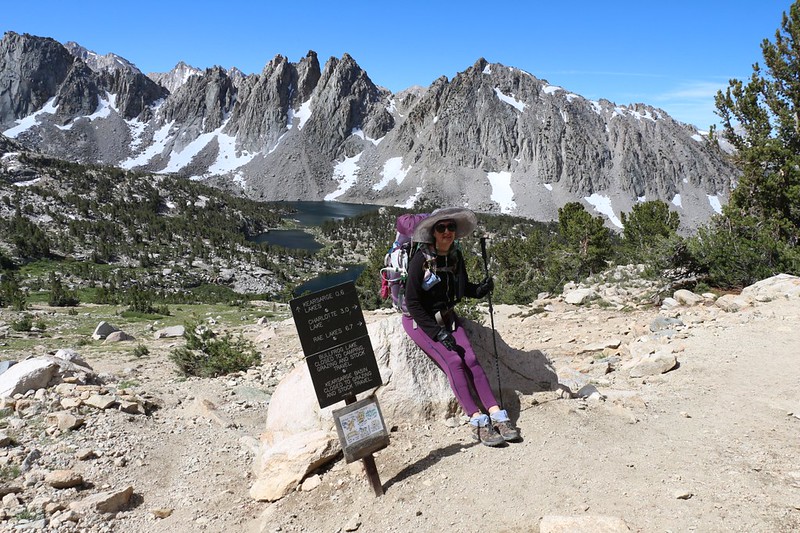 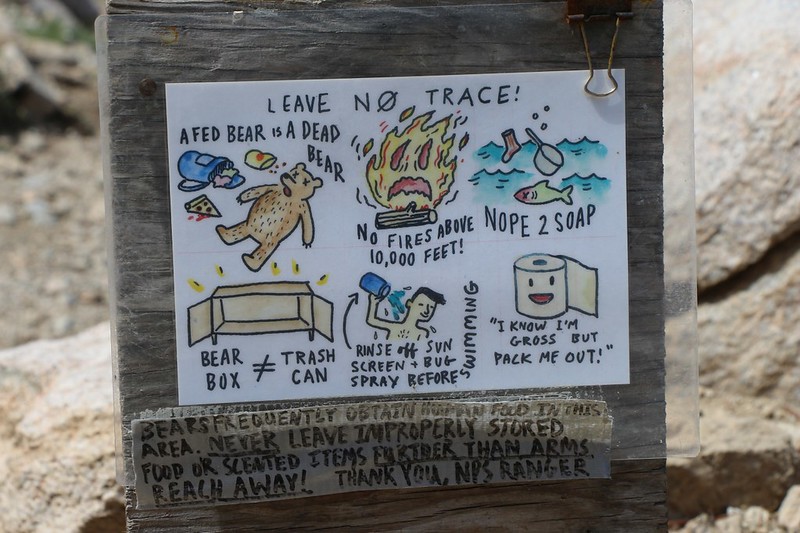 Since today was one of our long days of hiking we chose to take the high trail westward, rather than drop all the way down to the bottom of the basin.  Both routes would intersect the Pacific Crest Trail, but this one saved us a mile or so, and a whole bunch of climbing.  We ended up really glad that we took it, because the views were excellent the entire way!  If you’re down in a valley bottom, your view is often constrained by trees, but that rarely happens up on a mountain slope.  And we also had a good cooling breeze, which made for perfect hiking weather.  It was a beautiful Summer day in the High Sierra, and life was good. 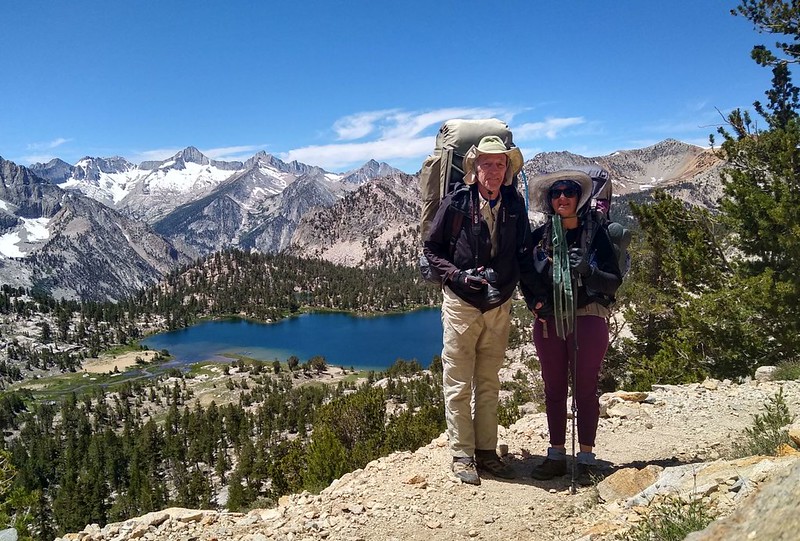 We took a long lunch break above Bullfrog Lake, and gazed out over the mountains to the south.  Kings Canyon National Park is absolutely gorgeous.  It was times like these that made all the work and endless mortgage payments seem worthwhile.  Vicki took a nap while I read my book, and we were truly at peace with the world. 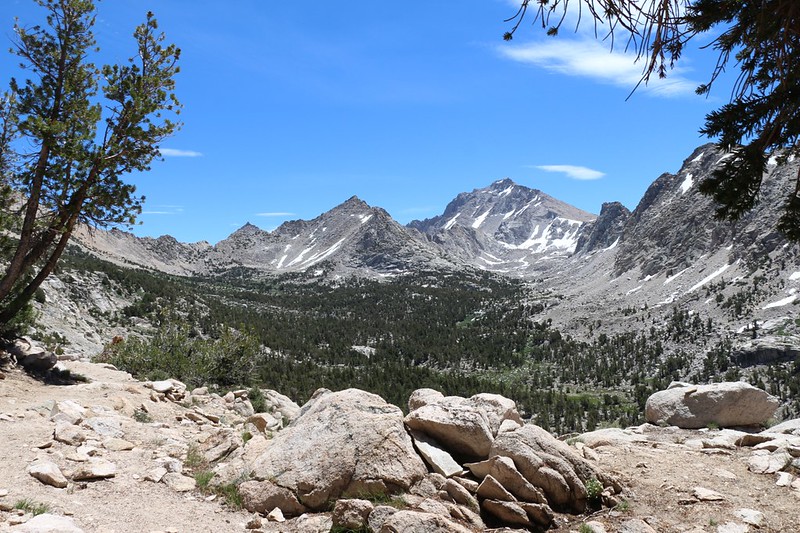 After a final view back east into the Kearsarge Basin, the trail curved around the corner and crossed over a broad ridge.  We came to the trail intersection with the PCT/JMT, and took a quick snack break.  We were going to need some extra energy, because after this, the trail was going to begin a long steady climb toward Glen Pass. 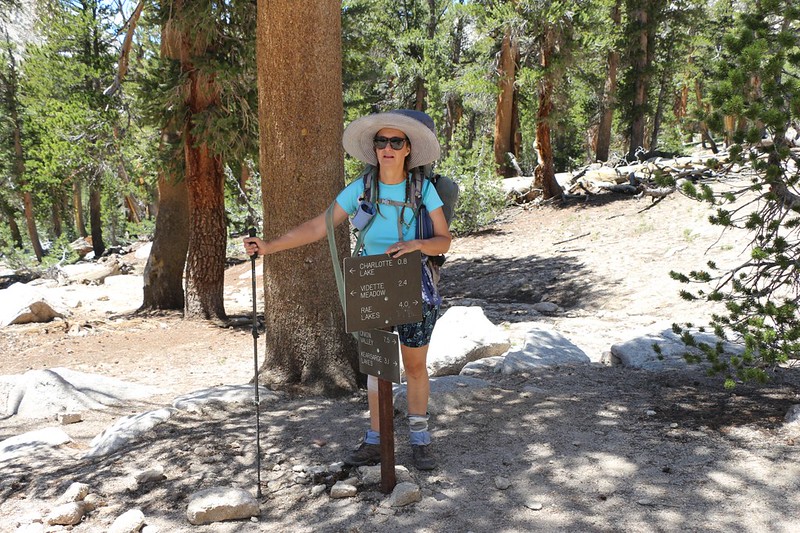 This section of trail stayed high above Charlotte Lake.  One of my early plans for this day was to descend to the lake and camp there for the night, then climb back up to the PCT in the morning, but this would have made the ascent of Glen Pass over 1600 feet of climbing, which Vicki wasn’t excited about.  So the revised plan called for us to climb a bit further today, and camp about 800 feet shy of Glen Pass, near a small pond.  Tomorrow would be an easy day under the new plan, and Vicki liked the idea.  The only problem was whether we could find a flat camping spot with water.  I was a bit worried about it initially, until I saw from the satellite photos (only two weeks earlier) that the upper lakes had finally thawed.  So we ended up continuing northbound on the PCT, looking down on the beauty of Charlotte Lake, rather than drinking water out of it.

Charlotte Lake and Mount Bago from the Pacific Crest Trail

Panorama view of Charlotte Lake and Mount Bago, with Charlotte Dome in the distance 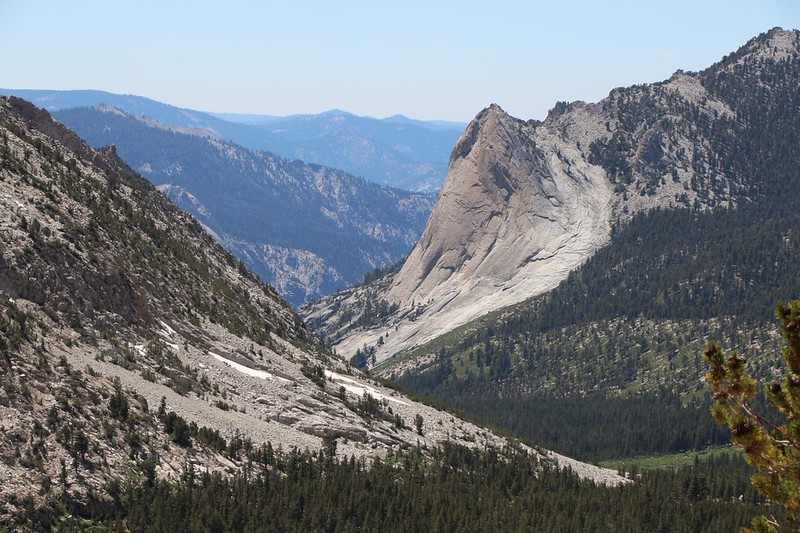 Zoomed-in view of Charlotte Dome from the PCT

Just the same, the uphill hike at the end of a long day didn’t improve Vicki’s energy level any.  We stopped along the way and she took yet another long nap, while I read my book and stared out over the valley toward Charlotte Dome.  It was too far away for any detail, but I knew that there were probably some rock climbers heading up its smooth granite walls at that very moment.  And I wondered, too, what it had been like back in the Ice Age, when this entire valley was full of slowly moving ice, the same ice that scraped and shaped the dome as it was forced around a bend.  Personally, I like this, warmer, friendlier, livelier planet much better as it is right now.

Naps work well to restore ones energy, and we shouldered our packs and hiked on.  The trail turned into a side canyon, and soon the expansive views were gone.  There was a small creek running along the trail, full of clear snowmelt water, which was truly excellent, as we were finally approaching the spot on the GPS map that I’d hoped to camp near.  Now all we needed was a flat place to pitch the tent.  It turned out that the precise spot I’d picked via satellite photo was still surrounded by steep snowbanks, making for a dangerous climb.  But it didn’t matter, as we found a previously-used spot not far from the trail, just above a small tarn, protected from the wind by some low stunted pines.  We plopped our packs down to claim the spot (and also because we were tired of carrying all that weight) and continued up the trail a bit, mostly to check out the bigger lake, but also to see if there was an even better spot with a view. 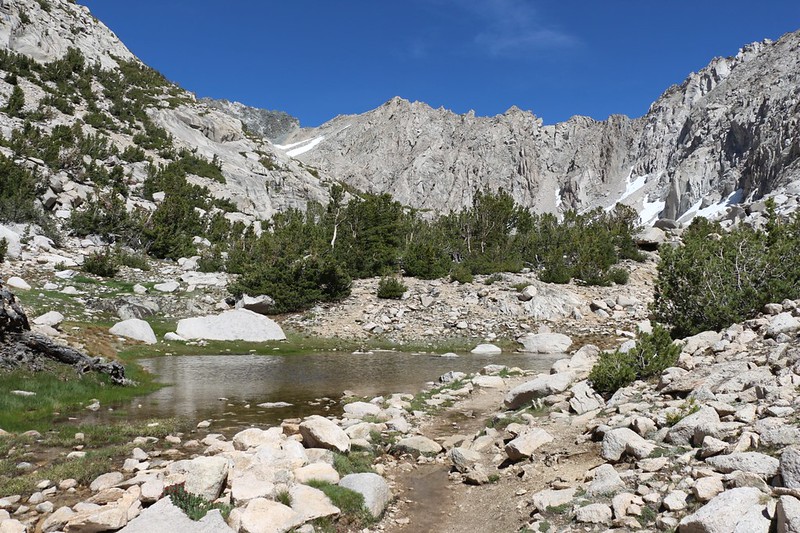 One of several tiny tarns along the trail, so we knew we had water, but we still needed a campsite 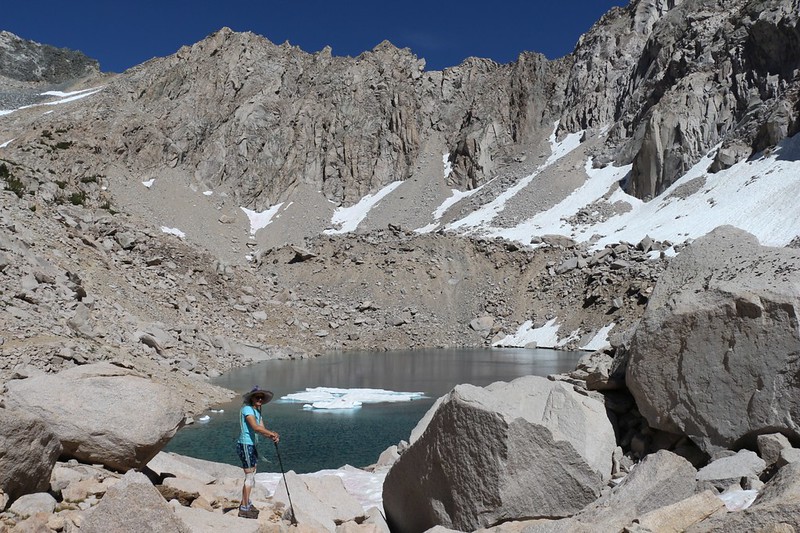 The first of the two larger lakes just south of Glen Pass on the PCT, but there was only one small campsite there

We found one tiny spot near the lake, and it was almost on the trail itself, so we turned around and went back down to the first spot.  We set up the tent and I got the pads and sleeping bag ready while Vicki whipped up some dinner, as usual.  I made some fruity electrolyte mix in a cup of water, and Vicki opted for some warm tea.  We really needed to rehydrate after that final climb. 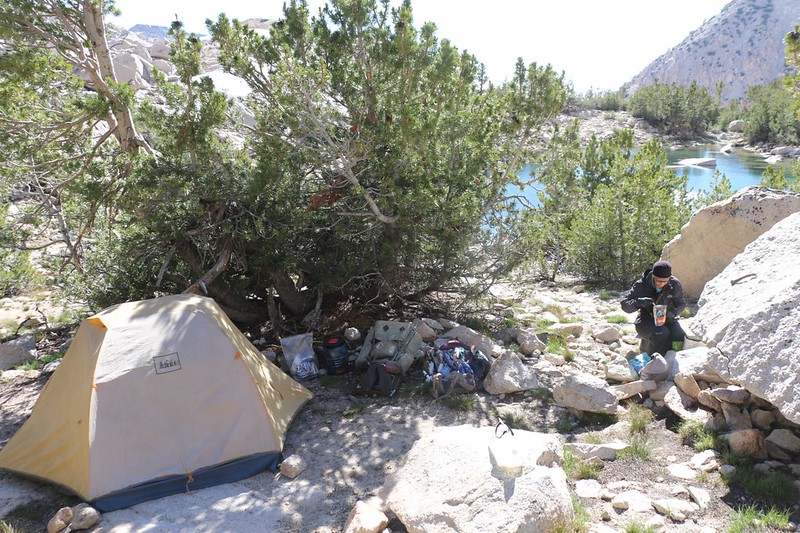 We set up camp just off the trail near a smaller tarn and Vicki made some dinner right away – we were exhausted!

We sat down and ate dinner in the sun on a boulder just above our campsite.  We read our books and talked about the day.  It had taken us nearly eleven hours to hike the seven miles, which wasn’t great, but it also included a long lunch and several naps, so all in all it was OK.  But most of all we were glad that we woke up so early and got the first big climb to Kearsarge Pass out of the way while it was cool.  And the best part of it all was that we were now really close to Glen Pass, and tomorrow would be a mellow, easy day, with only three miles of hiking.  We could even sleep late if we wanted!  And that’s exactly what we did.