We hiked the PCT/JMT from our campsite on Woods Creek to the summit of Pinchot Pass, visited Marjorie Lake, dropped  down to meet with the South Fork Kings River, and finally hiked uphill along the river to a campsite in Upper Basin.  We hiked eleven miles total, and climbed almost 3000 feet, making this one of our toughest days yet.

We knew we had a long day, so we woke up in the dark at 5am and got ourselves ready to go.  We ate breakfast, packed the gear, and were ready to leave by 7am, which is pretty much normal.  These things take time.  By then, the sun was peeking over the Sierra Crest to the east, and lighting up the local mountains.  Down below us to the south, we could see that same old smoky haze lurking down below in the Woods Creek valley, and we truly hoped that it would continue staying to the south. 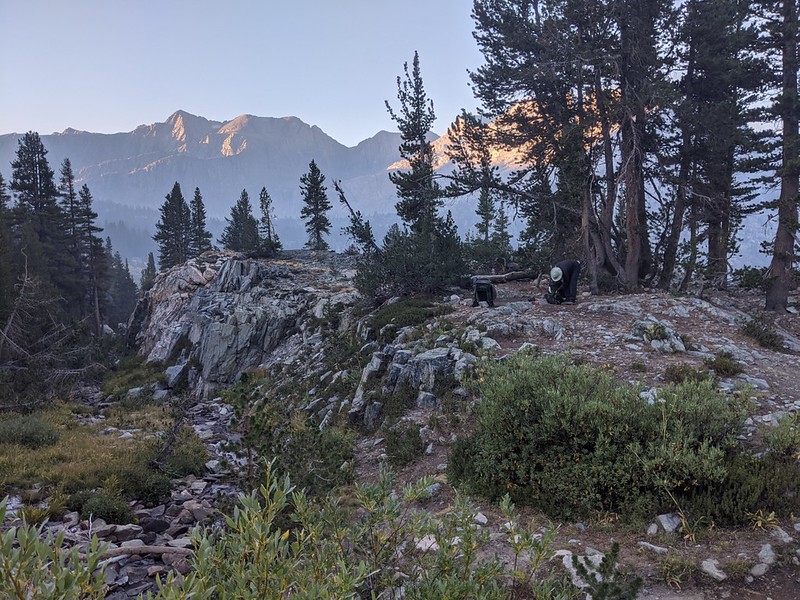 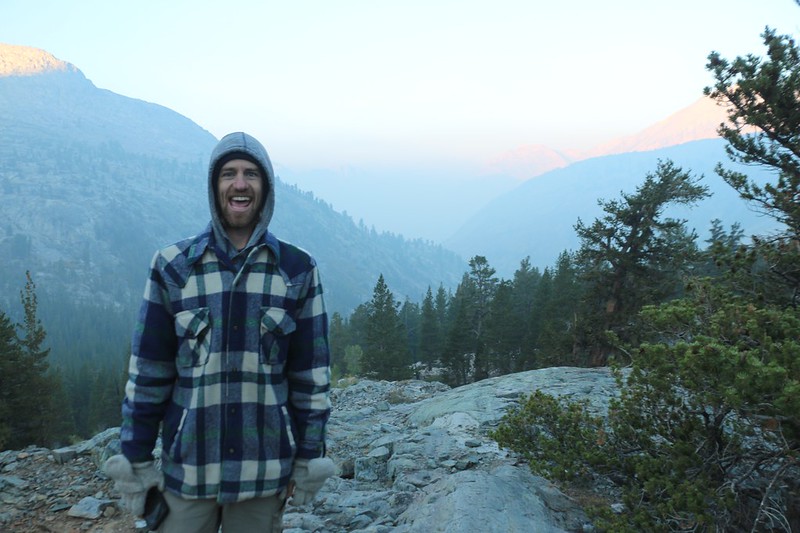 There was still smoke to the south down the Woods Creek Valley, but luckily we would be heading north

We hiked north and passed the sign for the unmaintained Sawmill Pass Trail, then continued onward toward the Twin Lakes, where we had originally planned to camp the night before.  Those two lakes had their own side trail, which we didn’t take, but we still were able to see them down below the ridge to our right.  Photographically, they were miserable subjects at that hour, being lost in the shadow of Mount Cedric-Wright, and we weren’t waiting until the afternoon to get a good picture.  But there were several unnamed lakes in this high basin that formed the headwaters of Woods Creek, and they were fine subjects for the lens. 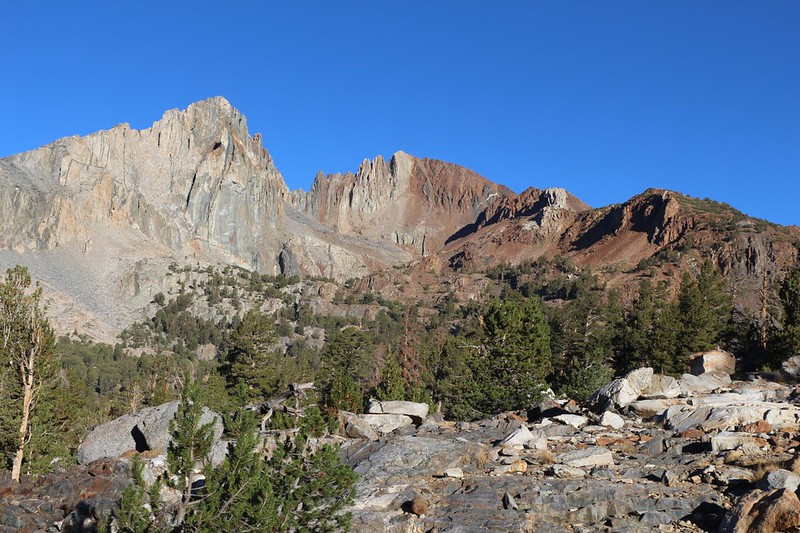 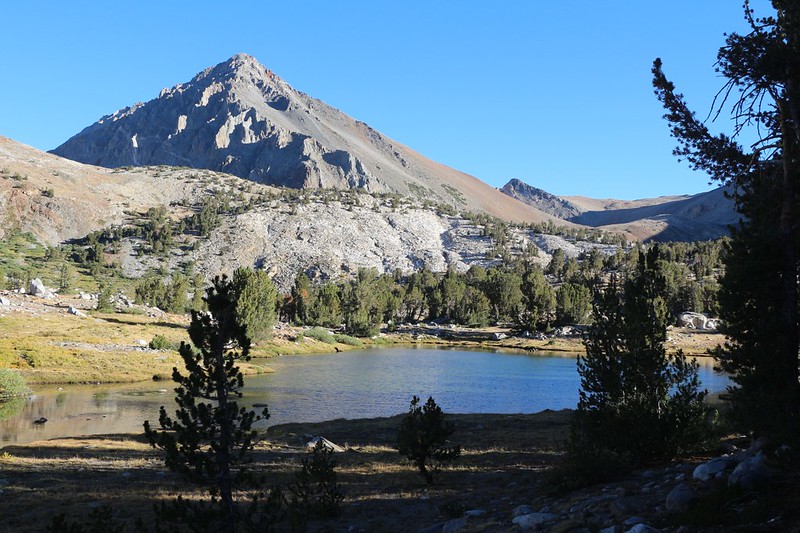 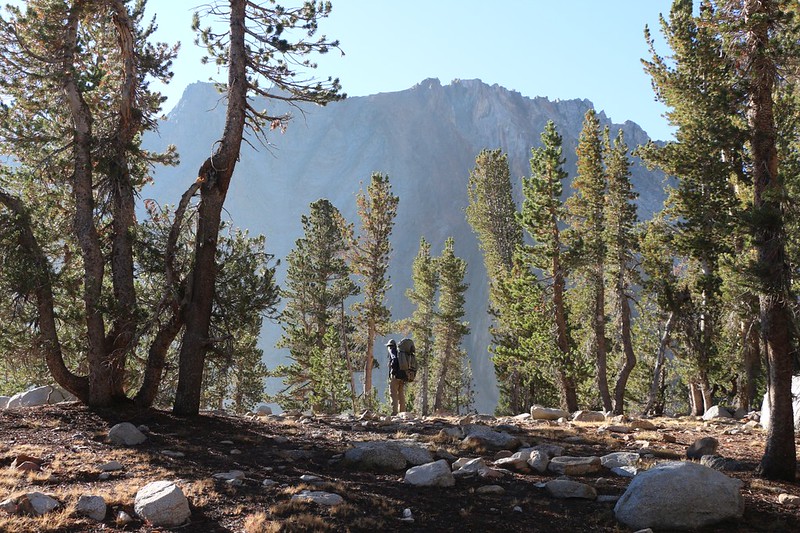 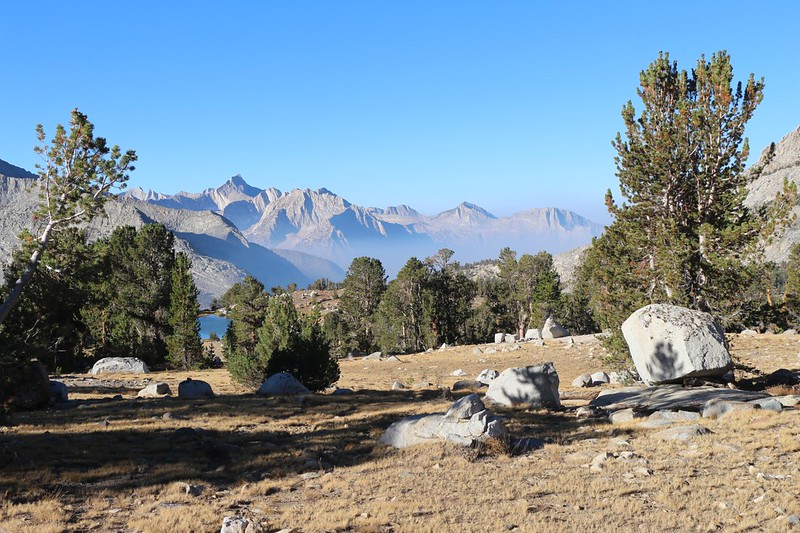 Looking back down the Woods Creek Valley, we saw the smoke from the south creeping up on us – Hike Faster!

Soon enough, we came in sight of Pinchot Pass, which was on the ridge between dark red Crater Mountain and Mount Wynne.  The trail took its time getting near the pass, traveling along next to several nearly-dry tarns and seasonal watercourses.  This late in the Summer of 2020, the high country was getting rather dry. 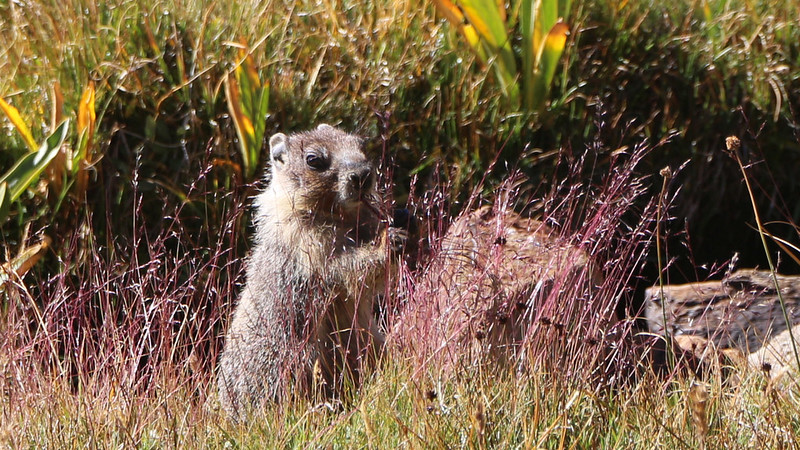 After three miles of hiking, we were at the base of the final mile-long climb to the pass.  This was the steepest part of our day, and there were a number of switchbacks on the way up.  But as much as I complain about climbing, the pain of it is offset by the ever-better views.  Soon we were looking back at the basin down below.  And the thing we couldn’t help but notice was the evil southern smoke cloud that had been following us up the valley all morning!  It seemed to be going out of its way to ruin our hiking trek, and it was only our ability to keep heading north that kept it at bay. 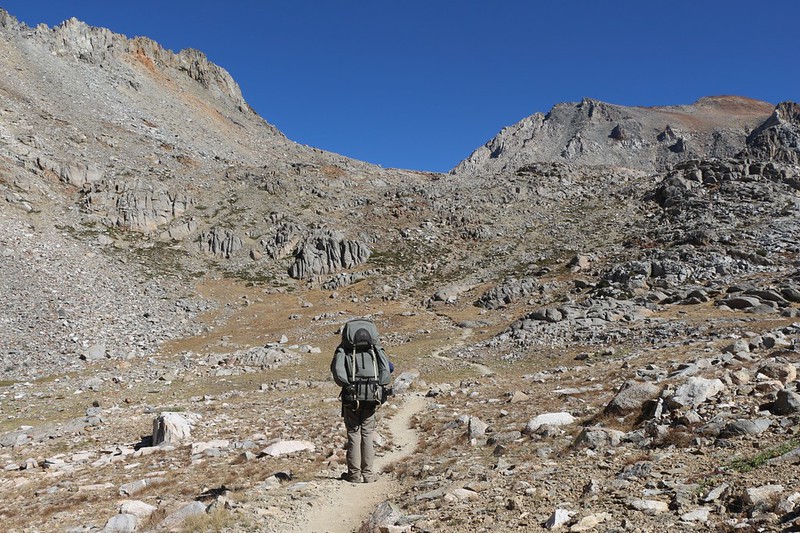 Pinchot Pass is just ahead of us – now all we have to do is climb all the way up there!

Panorama view south from the PCT just south of Pinchot Pass, with the smoke still below us in the Woods Creek Valley 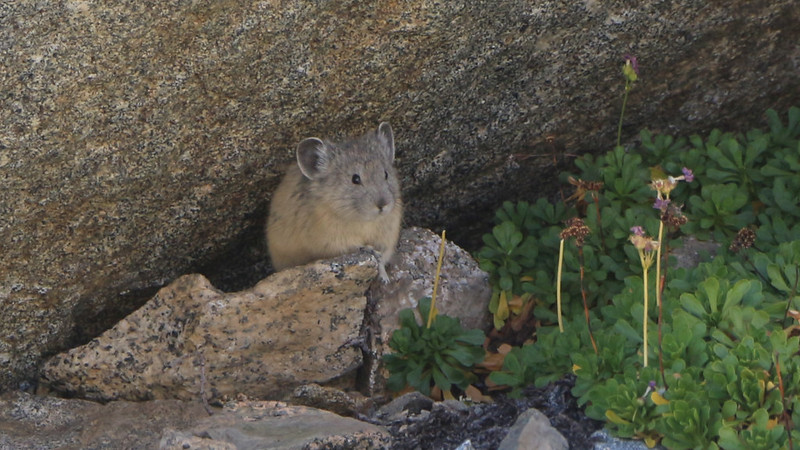 We took off our packs at the pass and looked around.  I took a ton of photos and videos, as the view was great from here.  Now we had new vistas to the north, down below to Lake Marjorie and the South Fork Kings River.  I got out the “Peakfinder Earth” app on my phone and started naming off some of the mountains that were visible from there.  Far to the north were the high peaks and fourteeners like North Palisade and Mount Sill.  I told my son that we would be hiking just below them in three day’s time.  It worked out that Pinchot Pass was, essentially, the center point of our seven-day trek.  This was the third of five passes, and the fourth of seven hiking days.  And for once we were the only people on the pass.  The southbound JMT hikers had been drying up due to the Creek Fire, and we were the only ones we’d seen heading north.  We had met a few small groups of hikers earlier that morning, and we would meet several more later on that day, but for now it felt like we were all alone in the middle of nowhere, the only ones privileged enough to enjoy this sublime and awesome view. 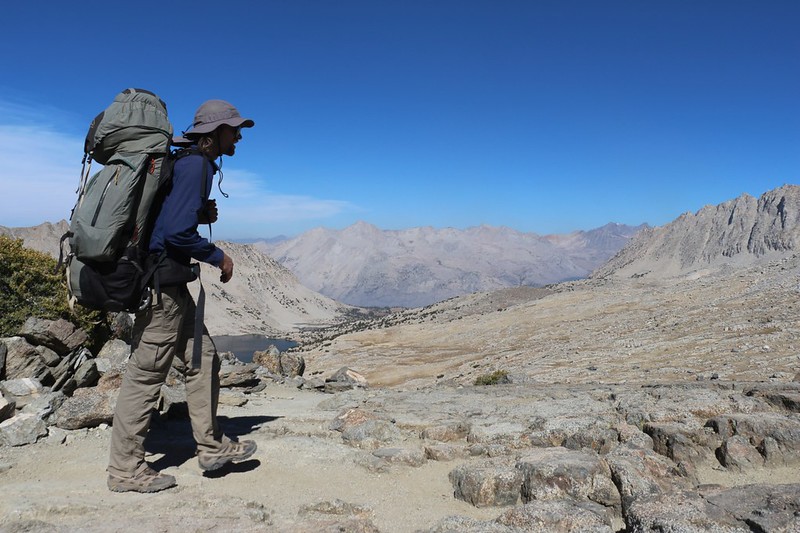 GoPro panorama video from the top of Pinchot Pass 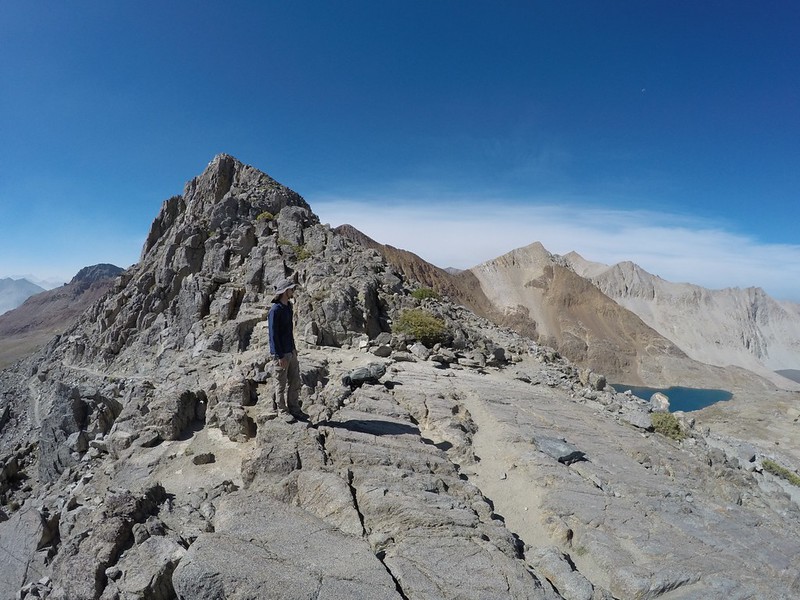 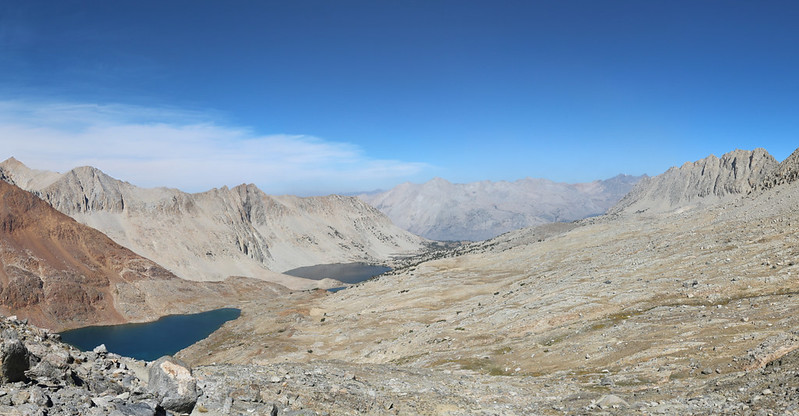 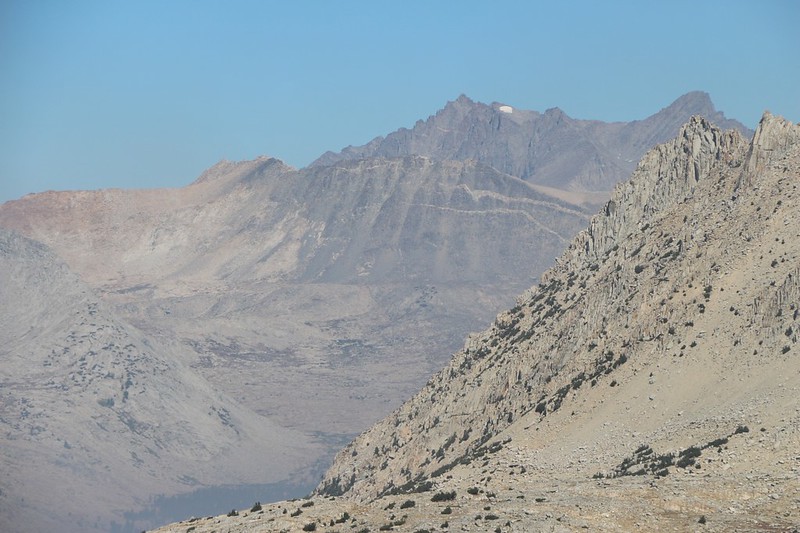 Eventually, of course, we put our packs back on and continued downhill from the pass.  We hoped that we were leaving the smoke behind, as we were now entering an entirely new drainage system, that of the South Fork Kings River.  All told, we would be descending over four miles and 2000 feet down to meet that river, and we were ready for some easy hiking.  So down we went, taking in the views and the breeze on our way to Lake Marjorie. 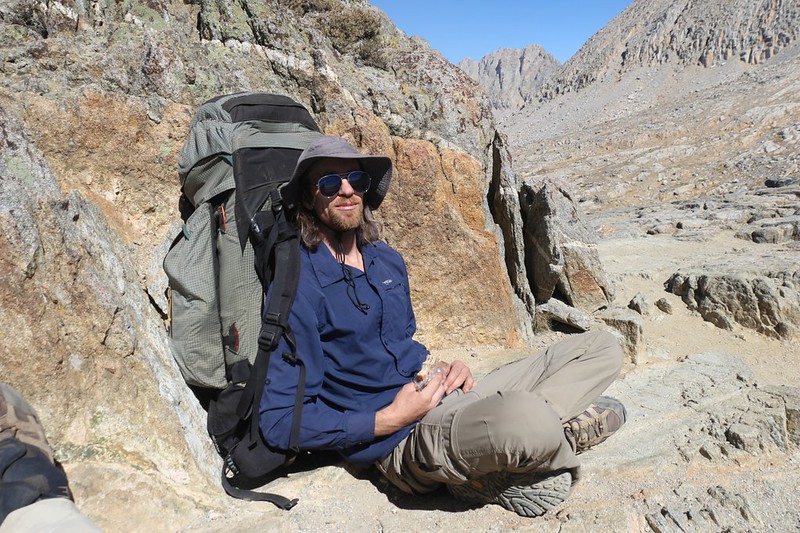 We liked Pinchot Pass but we couldn’t stay there forever, so it was time to put our packs back on

Panorama view northwest as we hiked down from the pass, with Lake Marjorie on the right

Lake Marjorie was situated at 11132 feet elevation, and, as such, it was a true High Sierra Lake.  The vegetation was very tundra-like, as we were still above treeline, although there were a few stunted pines in evidence along the shore.  Mostly what we saw up there was an abundance of glaciated granite.  It was obvious that this entire valley was once full of ice, and that this lake spent nearly half the year frozen.  No, we didn’t try taking a swim!  But we did eat some lunch along the shore, and watched a family of ducks swimming on the surface down below us. 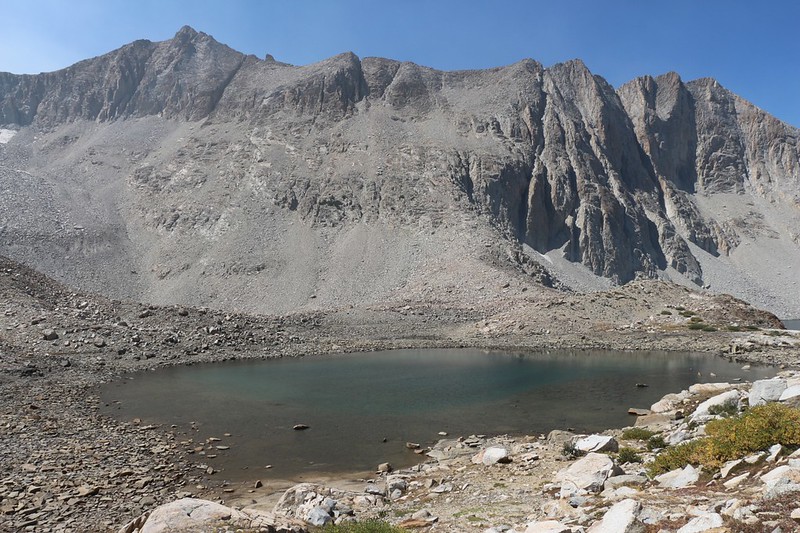 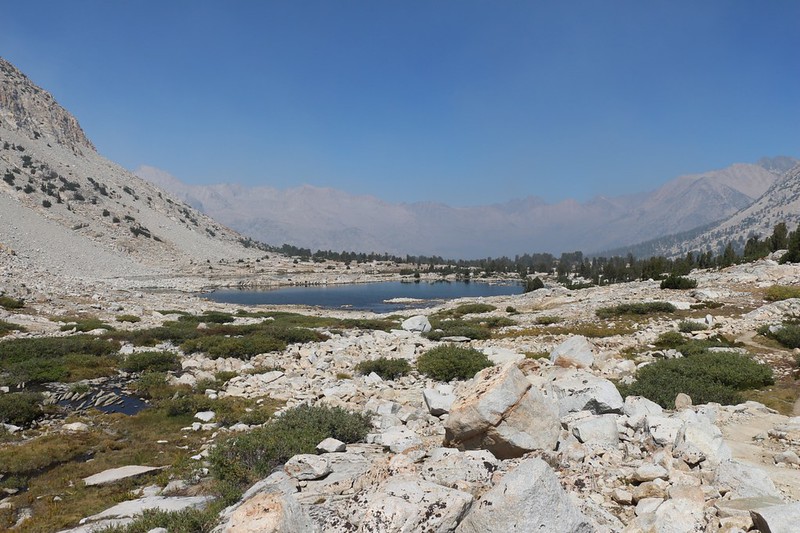 Looking north over the small lake below Lake Marjorie

We continued downhill, and soon passed the trail for Bench Lake.  I’ve always wanted to visit that lake, but it wasn’t going to happen this year.  After that, we went by the Taboose Pass Trail, which was closed due to a fire the year before, in 2019.  That was one of the trails that I never hope to hike, as it is very long and starts very low in the Owens Valley; it would be more like a Death March than fun.  As we neared the river, we looked to the left and saw the dreaded Muro Blanco, where the South Fork Kings River headed southwest to its junction with Woods Creek.  I’d read trip reports detailing the terrible bushwhacking journey down that fateful, untracked canyon, and because of those tales, part of me wanted to test myself against this Crucible of the Sierra Nevada.  “Adventure!” my wild side cried.  My saner side, naturally, told me to use my brain and learn from the mistakes of others.  Maybe someday, I sighed.  And maybe I could stay at Bench Lake then, as well.  Or even take Taboose Pass!  It would be an epic journey. 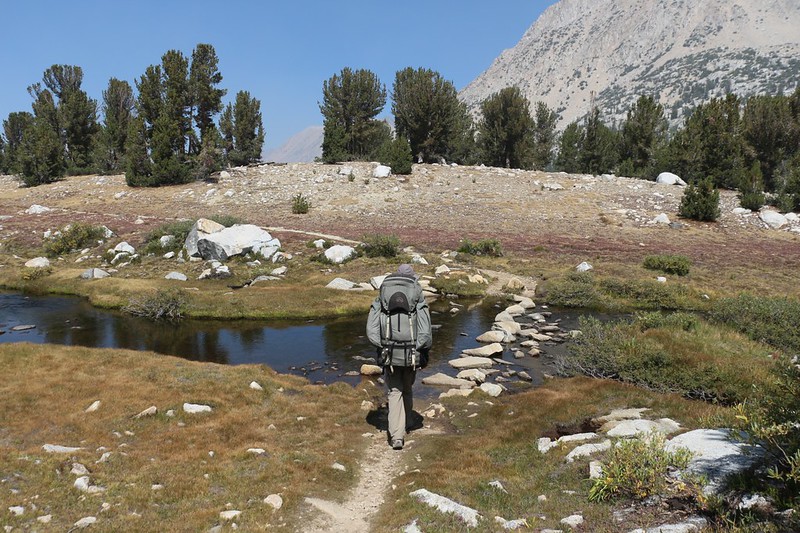 It was already 2pm by the time we reached the creek that leads to Taboose Pass.  We stopped for a break and soaked our feet in the cool water.  Ahhh!  That really hit the spot for hot, tired feet.  We ate a bit more snack and then continued a bit further until we crossed the South Fork Kings River.  This was probably a difficult crossing in the Spring, but it was only a simple rock hop in September 2020.

We had two and half more miles to go that day, and all of it was uphill, about 900 feet of climbing to go.  So off we went, and we were pleasantly surprised at the trail through this section.  Maybe the Muro Blanco, down below us, was wild and untamed, but the river up here was positively benign.  The slope was easy-going, and the river was flanked by grassy turf.  There were plenty of pine trees, and this late in the afternoon we even got some shade.  The trees were set back a ways from the river, so that there was plenty of room for the grassy slopes.  We envisioned having a nice cabin alongside the river down here, and imagined how pleasant it would be to sit out on the front porch and watch the river flow by. 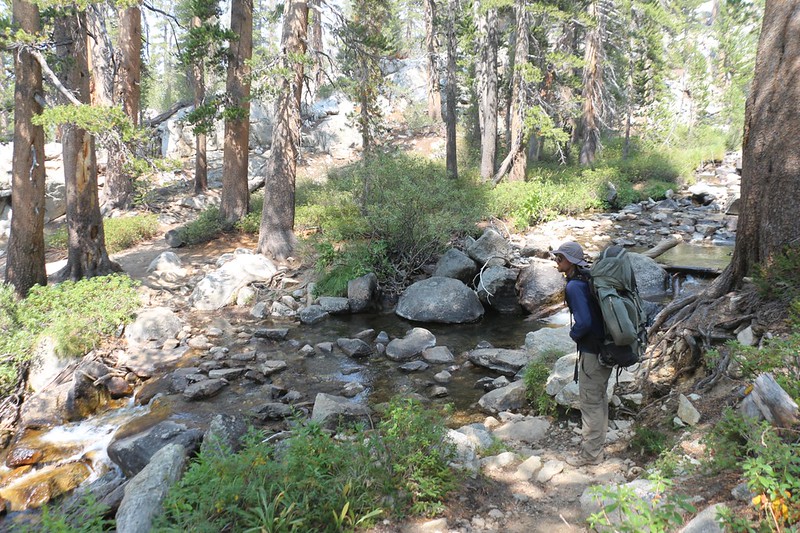 Down at the lowest point of the day’s hike we crossed a small creek, took a long break, and soaked our tired feet 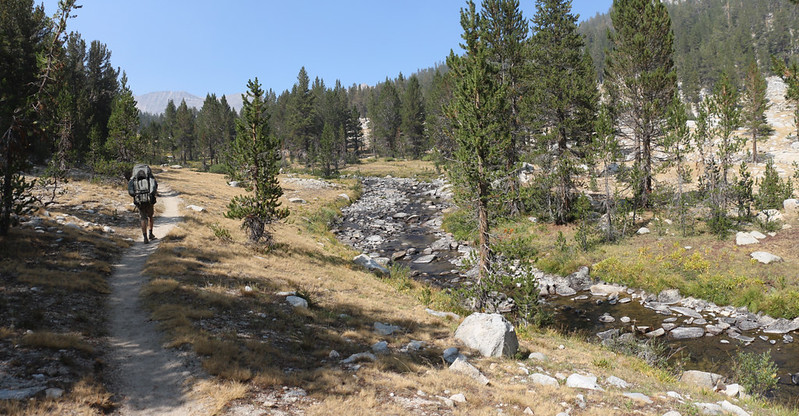 Soon we arrived in Upper Basin, the wide valley at the headwaters of the South Fork of the Kings River.  The Sierra Crest was to the east, and the mightiest peak along this stretch was Split Mountain, one of the California Fourteeners.  As we climbed, we also noticed that our relentless enemy, The Smoke, had found a way around Pinchot Pass and was creeping up on us once again.  It must’ve detoured up the Muro Blanco from its lair down in Woods Creek. 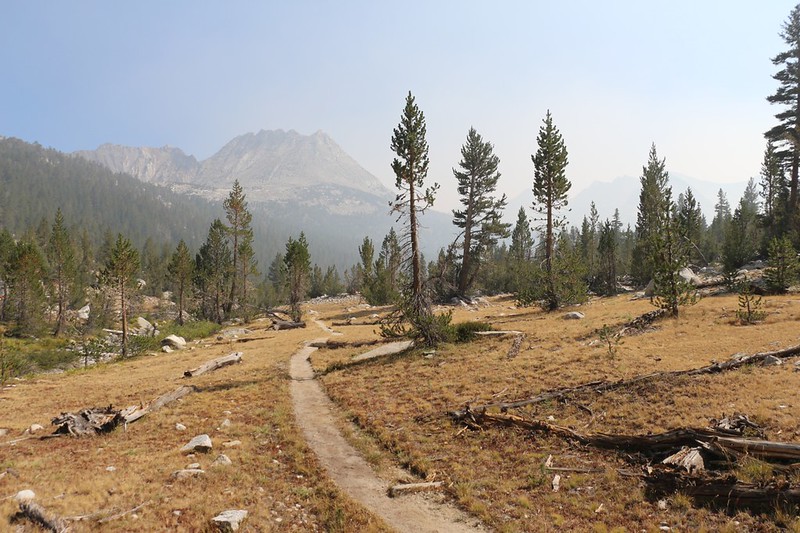 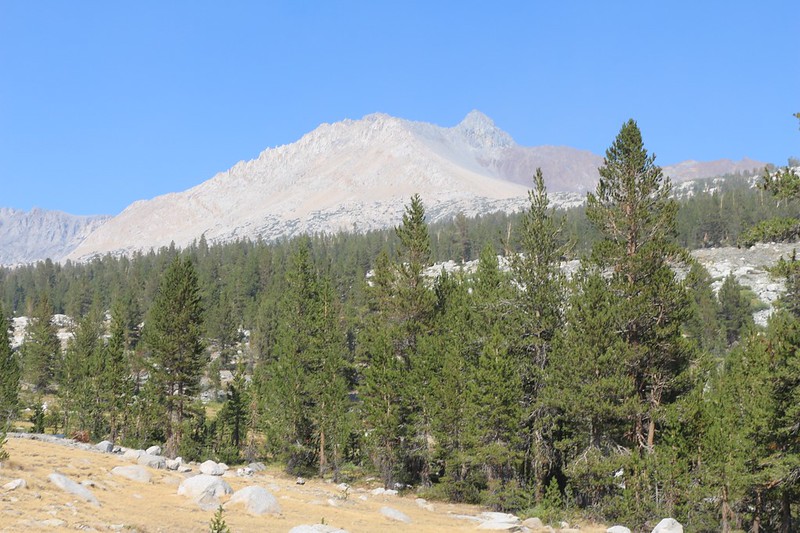 I have to admit that I had no clear idea where we were going to camp that night when I planned this trip, except that it would be somewhere in Upper Basin, which is quite large.  I consulted the Guthook Guide, a phone app for PCT hikers, and it told of a good spot not too far ahead, which was supposed to have fine views.  I kept my eye on the GPS and soon we arrived at the spot.  We were the only ones there, but that was hardly a surprise.  We’d barely seen anyone all day.  And people call the PCT/JMT the Sierra Superhighway!  If so, it was the least crowded superhighway I’ve ever been on! 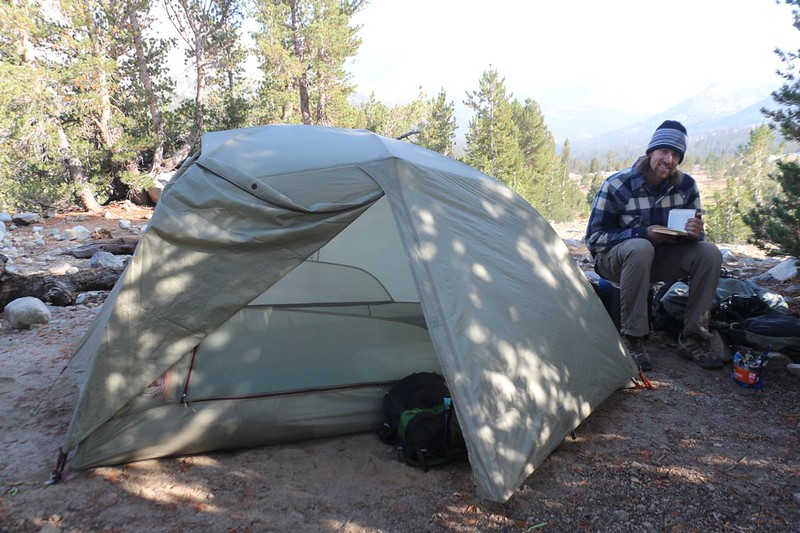 Our tent and campsite with a view, in Upper Basin along the South Fork Kings River

We set up the tent, filtered some water from the river and cooked up some dinner.  We sat and looked around us as we ate.  The sun got lower beyond the range to the west, and made a highlight of the smoky clouds to our south and west.  We were still in the clear air, thank goodness, and there was plenty of deep blue sky above us and to the north.  We hoped a northerly breeze would spring up overnight, but we weren’t taking any bets. 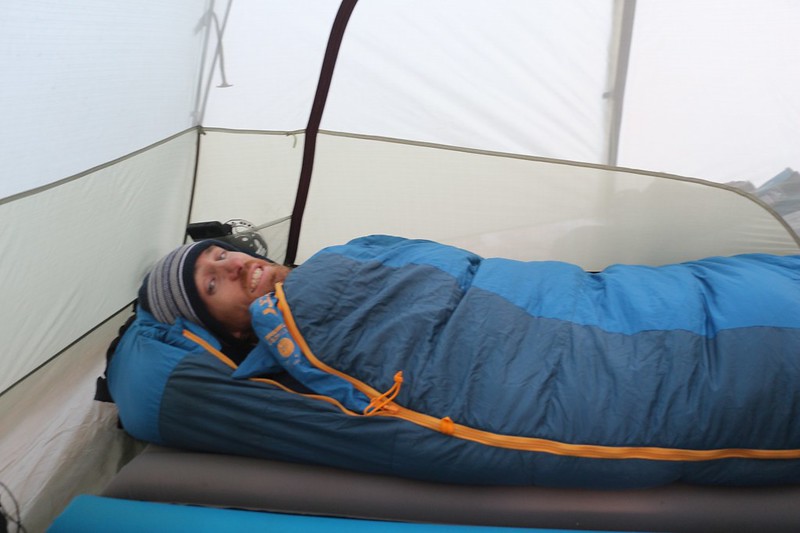 We were camped at almost 11,000 feet elevation, and it got quite cold rather quickly even before the sun went down

There weren’t any high clouds to make a glorious sunset, and the air was already cold, so we headed into the tent before the sun went down.  We got out the map.  Tomorrow we would be hiking uphill in the morning, then summit Mather Pass, followed by an extremely long downhill hike.  Downhill?  We liked hiking downhill.  If it was anything like today, we could expect to have another fun day of hiking.