We backpacked from our camp in Upper Basin to the headwaters of the South Fork Kings River, climbed up and over Mather Pass (12067 feet elevation), and descended 3700 feet into the Palisade Creek valley, for a total of thirteen miles of hiking.  It was a long day but an excellent one, thanks to the fantastic views from Mather Pass and the beauty of the Palisade Lakes and waterfalls along the way.

As usual, we woke up at 5am and started to get ready in the dark.  The sky was getting bright as we ate breakfast, and soon enough we were ready to go.  We had to hustle to stay warm, so we got ready a bit faster than you’d think.  We were happy to see that the thicker smoke clouds from the 2020 wildfires had remained to the south overnight, but there still seemed to be a general haze in the air.  The thick stuff I felt certain was from the SQF Complex Fire, but maybe this new haziness was from the Creek Fire, which was many miles to the north of us.  Yesterday’s trail gossip said that the fire had been growing exponentially, so it seemed quite likely to me.  Either way, we were stuck with it and would have to hike through it regardless. 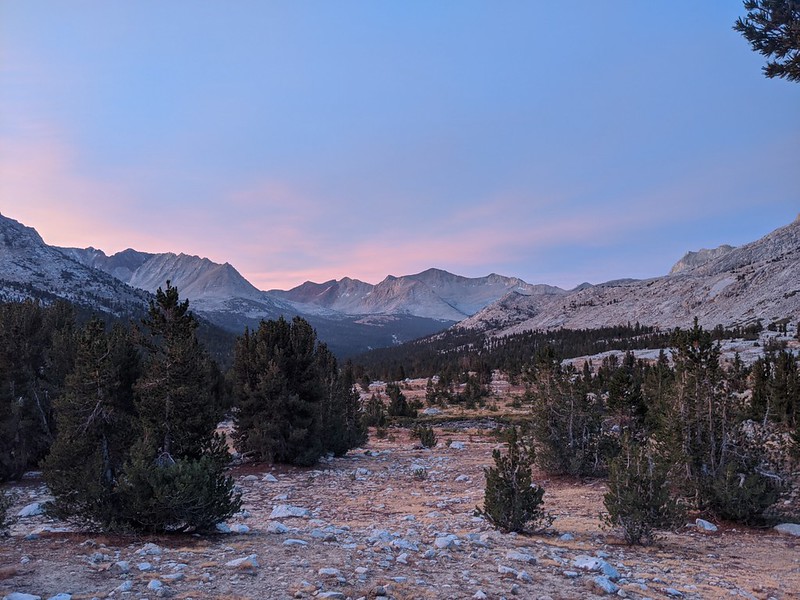 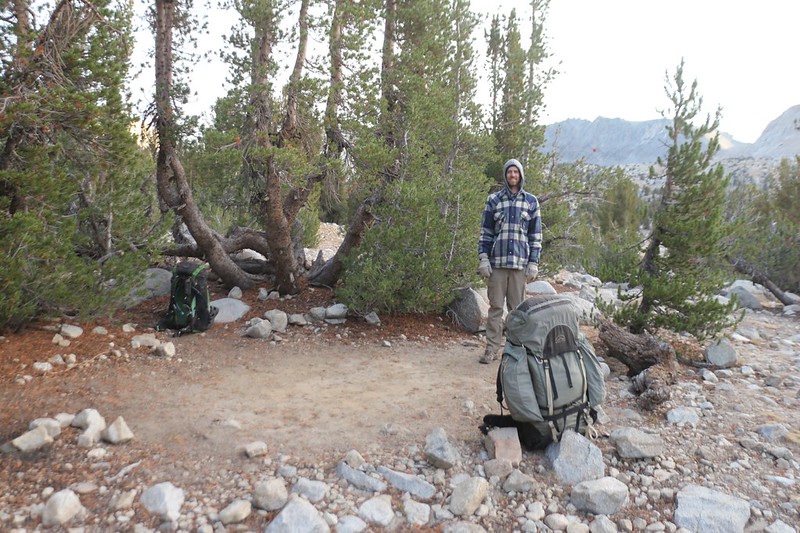 It was cold that morning but we got packed up and headed out just after dawn – off to Mather Pass!

We had three miles of hiking and 1200 feet of climbing in order to reach Mather Pass.  It was quite cold, so we kept on our jackets, hats, and gloves as we hiked upward through Upper Basin, which was quite wide in this area.  This was where the drainage’s main snowpack accumulated in Winter, melting in Spring to flow down into the South Fork of Kings River.  It was classic, tundra-like High Sierra country, and the vegetation was small and hardy, low to the ground, with a few stunted pines along the watercourses.  We imagined what it was like to be in a howling Winter storm on this flat, windswept terrain.  We even saw skins of ice that had formed overnight.  It was still Summer, but with ice! 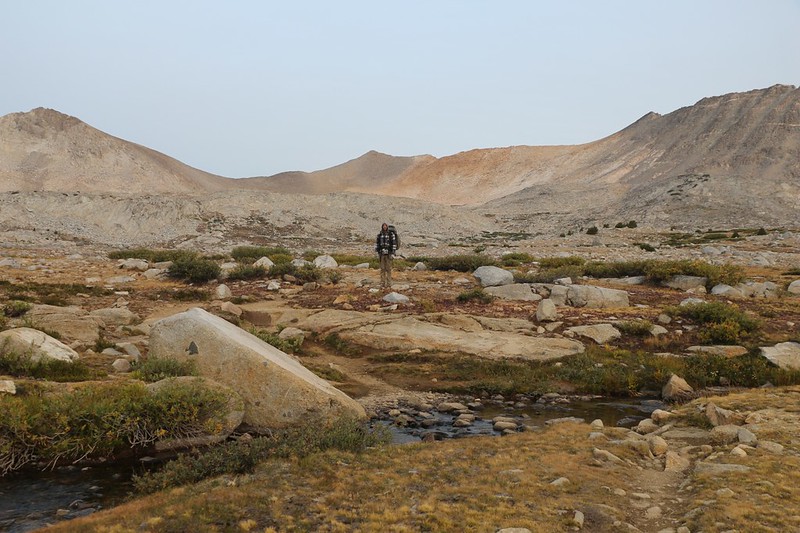 The South Fork Kings River was very small near its headwaters, with the “fake pass” left of center 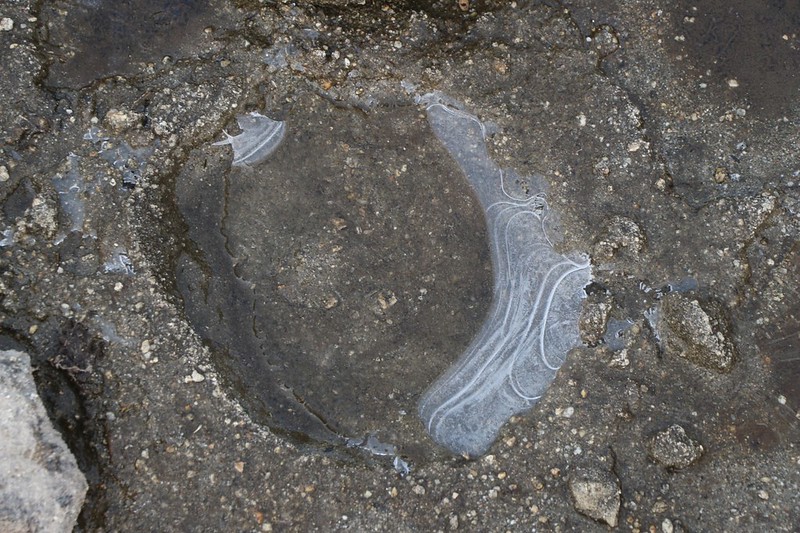 Initially, we weren’t sure which low point in front of us was Mather Pass, and the most obvious one turned out to be wrong.  I tried checking the map on my GPS, but I still wasn’t certain, and the only way to be sure was to follow the trail.  It became evident later on, after the trail swung wide beyond the pass, then curved back to climb it.  It was our little mystery of the morning.  Meanwhile, of course, we had plenty of views, which kept getting better the higher we climbed.  There were high lakes and tarns and tiny streamlets, while mighty Split Mountain looked down upon us from the east. 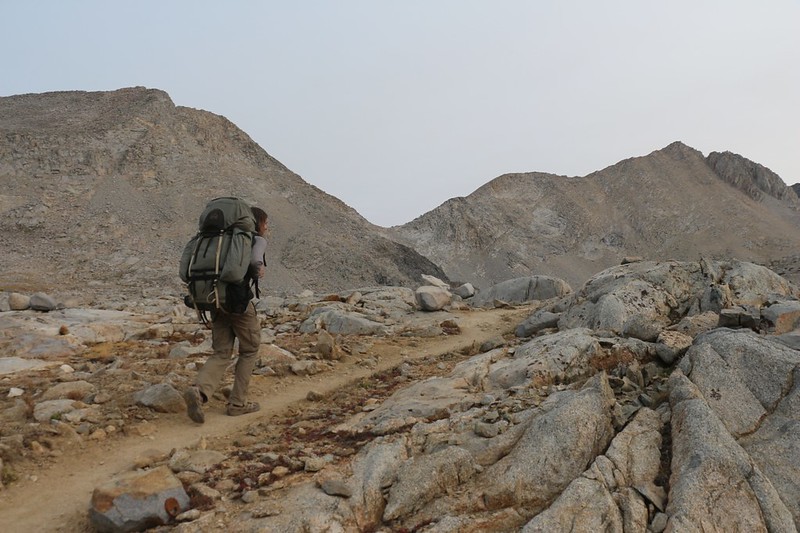 Mather Pass finally came into view ahead of us

The last half mile of switchbacks was the steepest.  We were still fresh, and it wasn’t too hot, so we made decent time.  This area was mostly rocky talus, with only a few plants here and there.  Up near the pass we discovered a patch of polemonium (sky pilot) plants, but this late in the season their pretty blue flowers had long since finished blooming.  And the views kept getting better as we climbed. 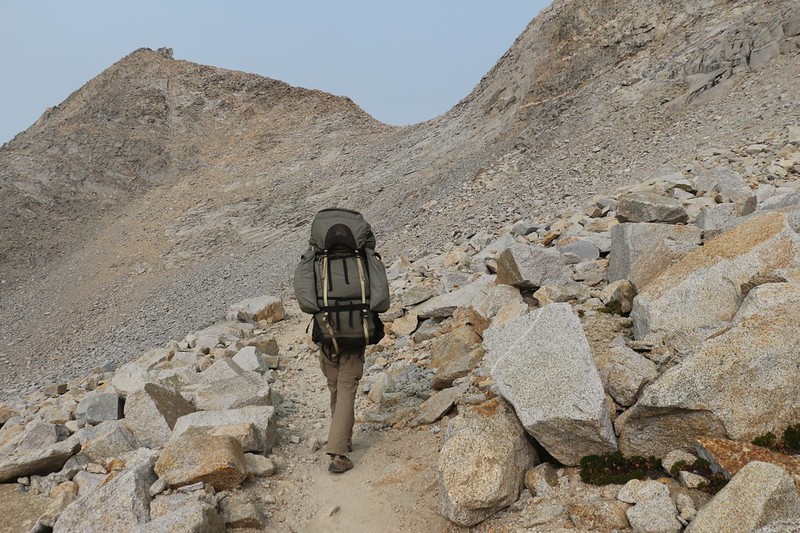 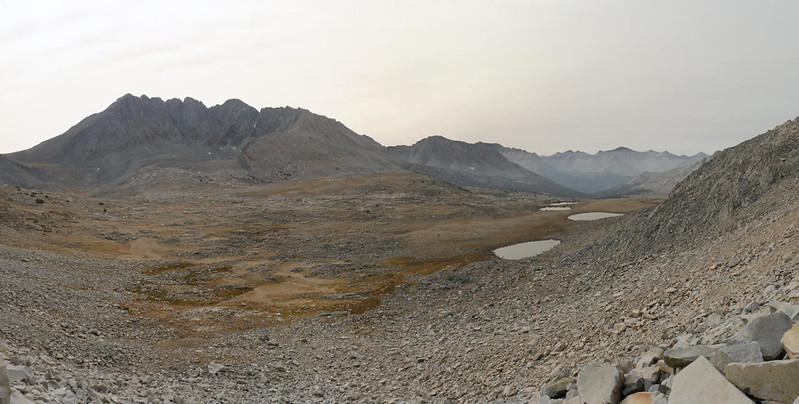 Split Mountain (14064 feet elevation) is on the left, and Upper Basin is below 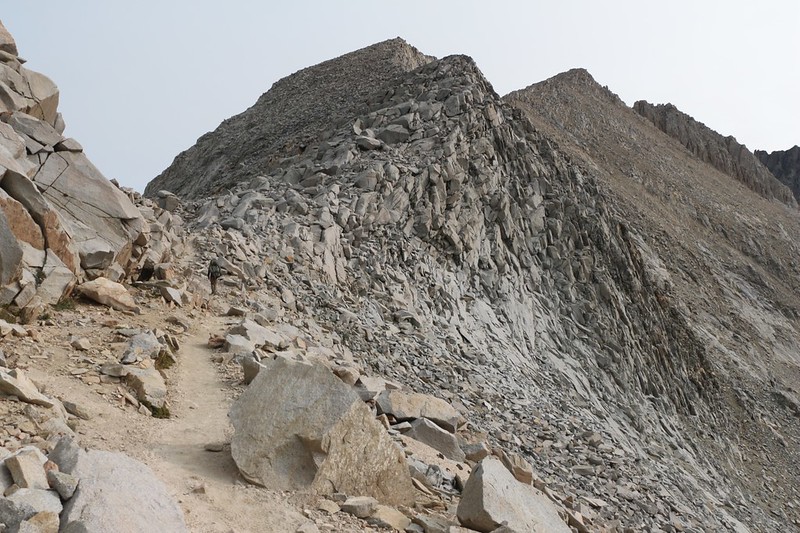 We finally made it to Mather Pass, with Twin Peaks to the east along the ridge

We made it to the top and took off our packs.  Time for a break!  I fired up my PeakFinder app and identified the nearby mountains, especially the fourteeners along the Sierra Crest to the north.  There were six of the fifteen California Fourteeners visible from the pass: North Palisade, Starlight Peak, Mount Sill, Polemonium Peak, Split Mountain, and Middle Palisade.  Thunderbolt Peak, another fourteener, was hiding just behind North Palisade. Other notable peaks included the Palisade Crest, Disappointment Peak, Mount Williams, and Norman Clyde Peak, but they were “mere” thirteeners.  From up there we could see the South Fork Kings River drainage to the south, and to the north was Palisade Creek, which eventually met up with the Middle Fork Kings River somewhere down below the point where the canyon made a turn to the left.  An impressive view, indeed.

Panorama view southeast from Mather Pass, with Upper Basin and the headwaters of the South Fork Kings River

GoPro panorama video from the summit of Mather Pass 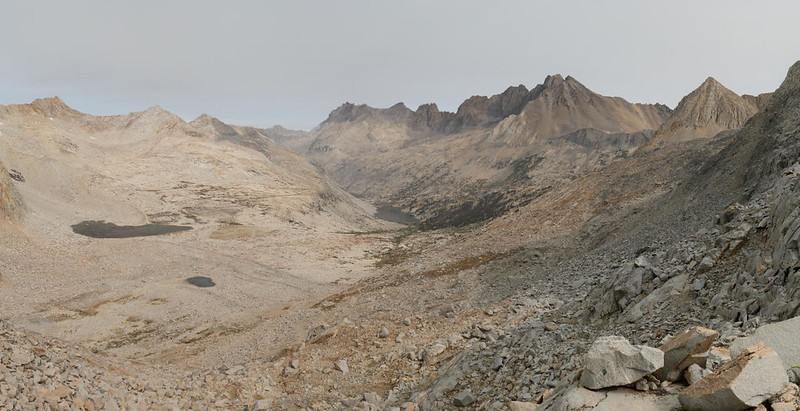 We couldn’t stay up on Mather Pass forever, whether we wanted to or not.  We took a couple of shots with our cell phone cameras, so that we could send them to friends later on, when we were back in range of cell towers, strictly for the purpose of making them jealous.  Labor Day was over, and they were all back at work, slaving away as always.  Once again, we said goodbye to the smoke, which still seemed to be following us as we headed north.  If the South Fork of the Kings River wasn’t far enough north, hopefully the Middle Fork would do.  It was looking promising, but that’s what we said when we crossed Pinchot Pass the previous day. 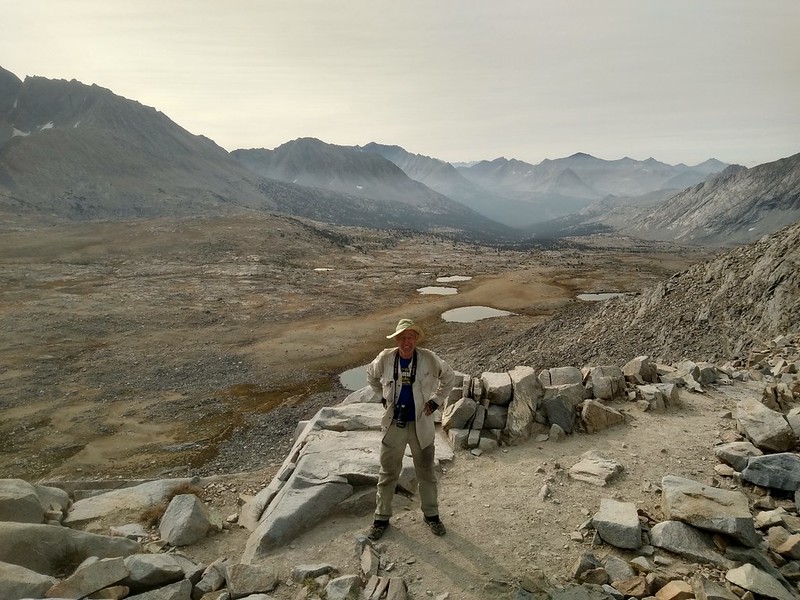 Me on the PCT, from Mather Pass, looking south at Upper Basin and the South Fork Kings River 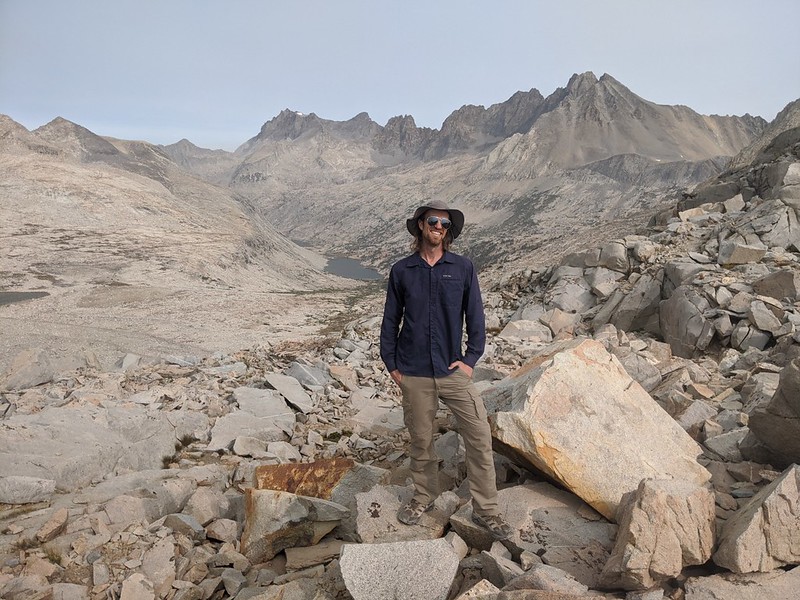 We put on our packs and started blasting along, downhill all the way.  This was yet another reward for having sweated our way up to the top of a pass.  Namely:  Getting our energy back.  Down below us was the glacier-carved valley of Palisade Creek.  Palisade Lake (and other unnamed lakes) were lying down there like gemstones in granite. 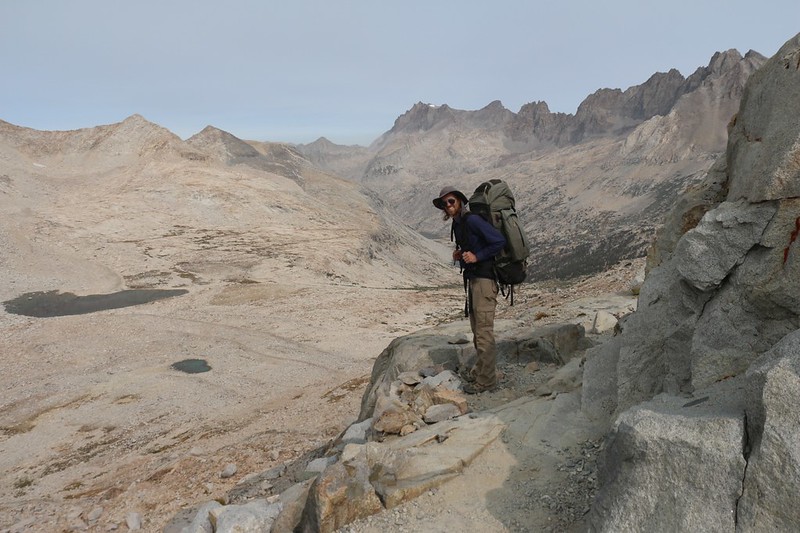 Hiking north from Mather Pass into the Palisade Creek drainage 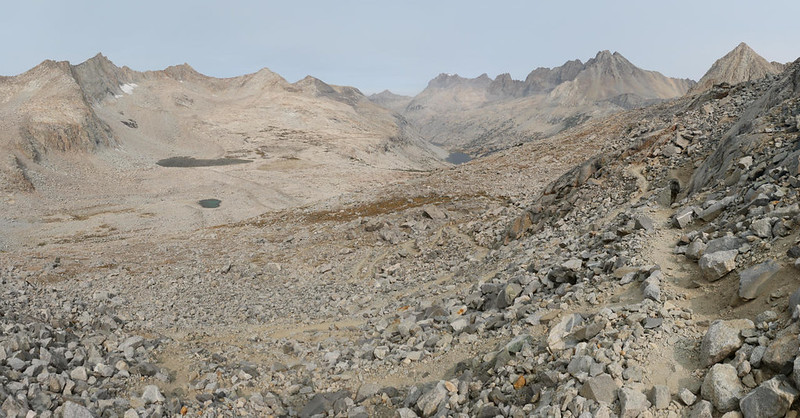 Wide angle panorama view of the basin below Mather Pass, looking down toward the Palisade Lakes 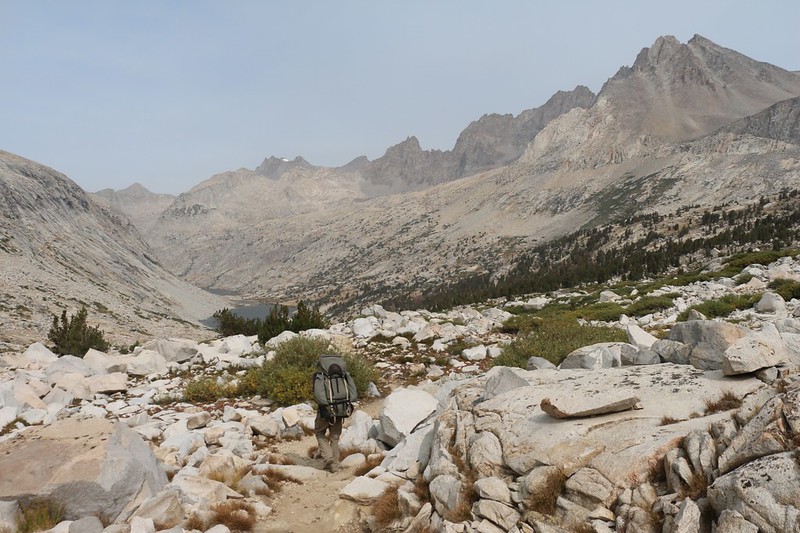 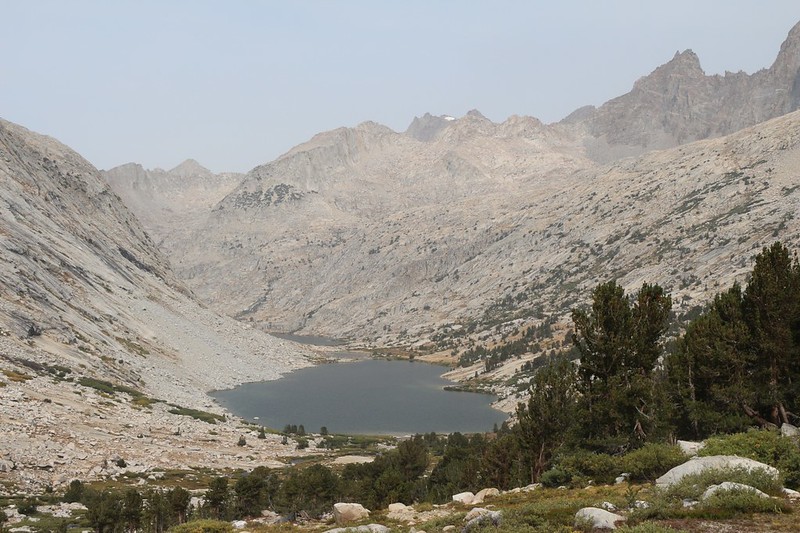 Three miles later, we were hiking along above the large, upper Palisade Lake.  It was getting toward noon, so we found a choice spot on some granite with a view and took a long break.  This was a seriously beautiful spot, we decided.  We took off our boots and cooled our feet.  We also ate some lunch and generally chilled out for awhile.  Slaving away on a hiking trail is fun enough, I must admit, but it’s hard to compete with relaxing on a granite slab in the middle of the High Sierra with your son.

Sadly, we couldn’t stay there all day.  Thus far, we had completed less than half of the day’s planned mileage, so we shouldered our packs and continued on.  There were plenty of new views to check out, including the lowest of the Palisade Lakes.  After that, the canyon turned a corner and we couldn’t tell what was in front of us.  And that would be the last we saw of Mather Pass.

Mather Pass is the low spot on the far left. This is where we ate lunch

Panorama video above the lakes 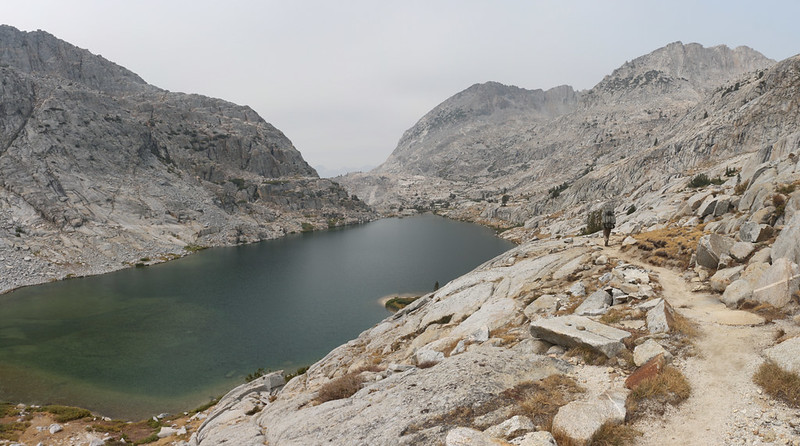 Lake 10613, the lowest of the Palisade Lakes 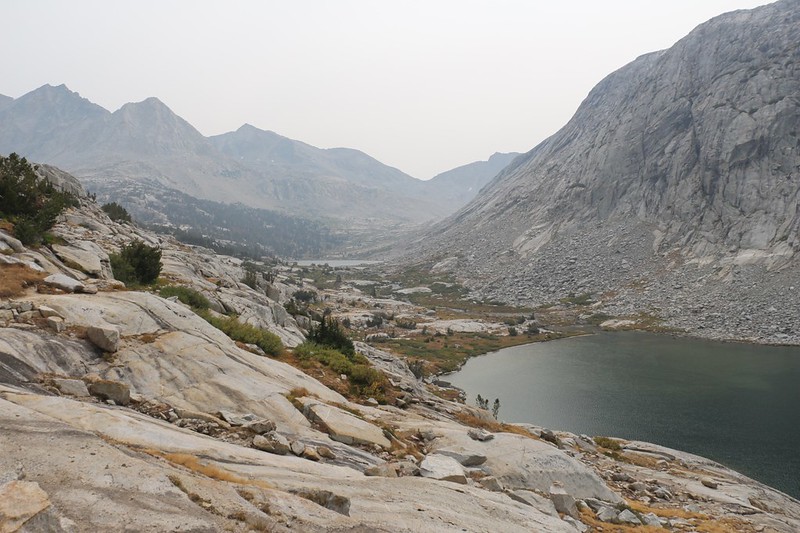 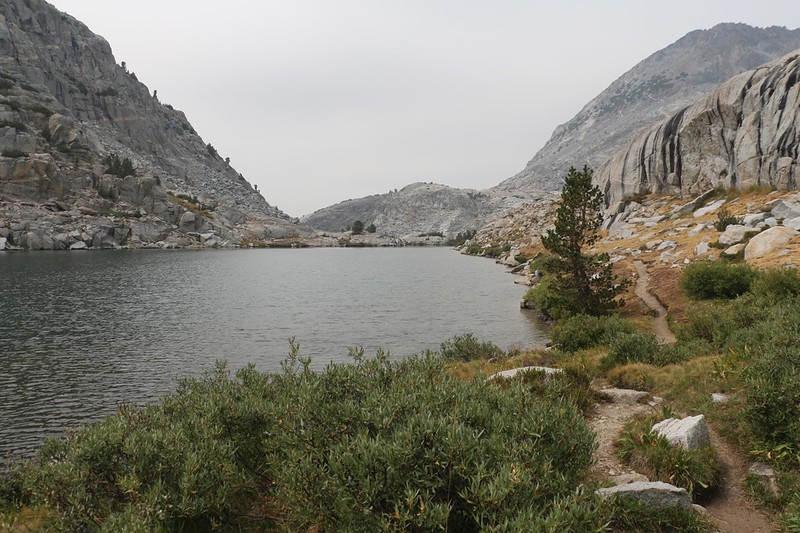 The granite slabs below the basin had obviously been carved and polished by glacial action.  We thought about the entire valley, all the way back to the pass, being chock full of solid ice, and how it must have flowed and melted and refrozen as it made its slow but steady way toward the sudden drop-off that loomed in front of us.  First the glacier had to make a turn, then it had to drop about a thousand feet, then turn back again.  Knowing glaciers, there was probably an ice fall here 20,000 years ago, back in the Ice Age.  And then it undoubtedly re-formed into a solid glacier again, way down below, as it headed for the Middle Fork Kings River.  I was so glad not be be around this place back then!  Right now, however, everything was fine.  What a view! 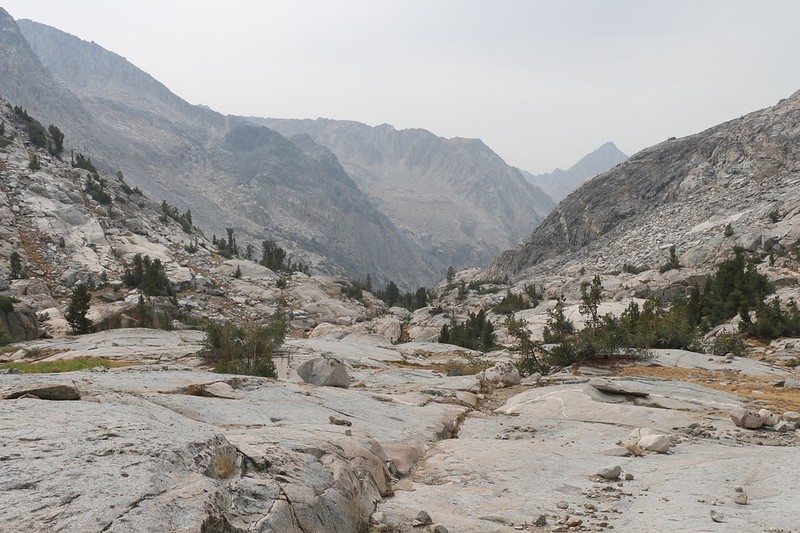 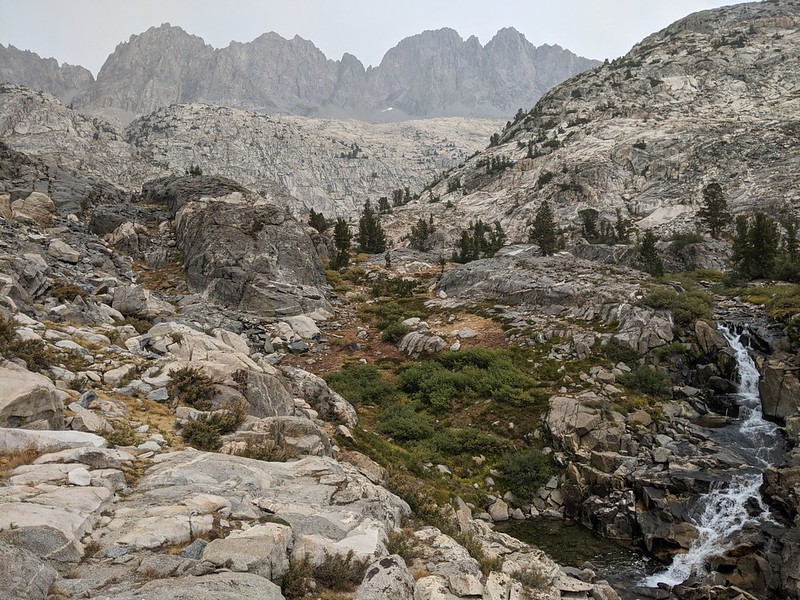 The big drop at the headwall of the lower canyon was truly impressive.   The trail switchbacked steeply, down into the lower canyon.  There might not be an ice fall here any longer, but there were plenty of waterfalls!  The place was roaring with water when we neared the creek, and this was at the end of a dry Summer.  In the Spring it must be truly impressive. 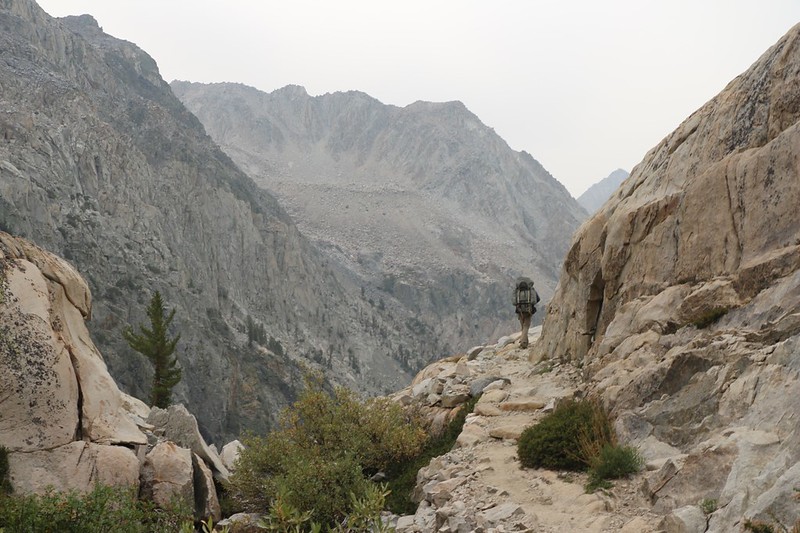 The Pacific Crest Trail is really cut into the granite walls of the Palisade Creek Valley, Mount Shakspere in the distance 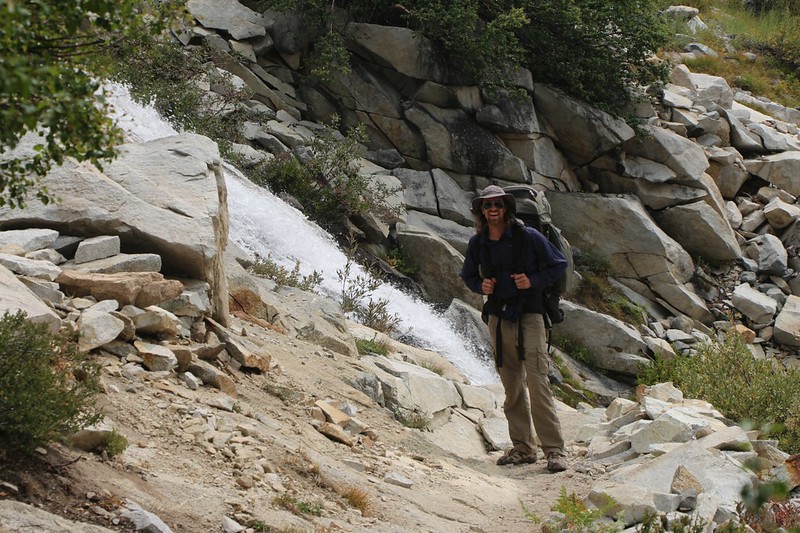 Video of a waterfall on Palisade Creek 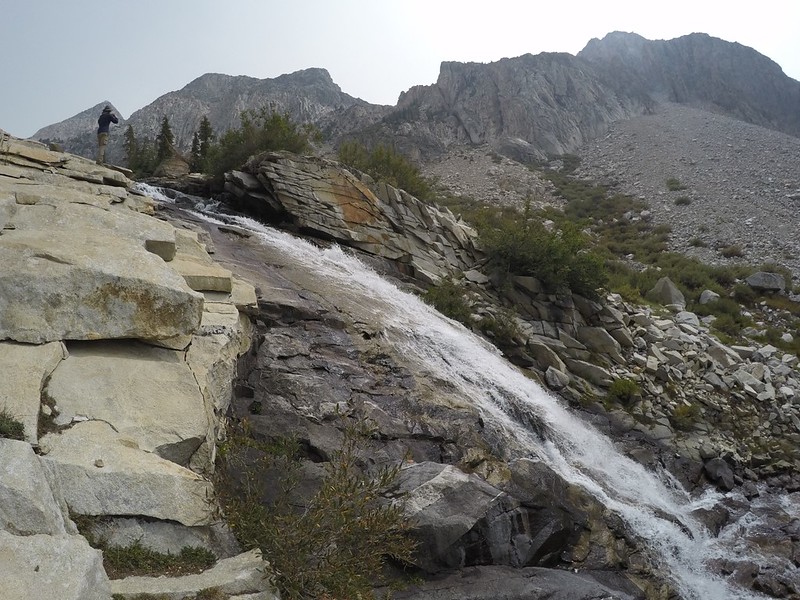 Waterfall on the headwall of the lower valley of Palisade Creek

Eventually, of course, we arrived down below in the lower canyon, where it widened considerably, and the slope  of the trail became much less.  At first there weren’t many trees, possibly due to avalanches of snow from above in the Springtime, but eventually we entered some proper pine forest.  We were below the tree line at last.  And some of those trees were huge!  After descending still further, we came upon groves of aspen, some of which had leaves that were already turning yellow for Autumn, even though it was technically Summertime in early September. 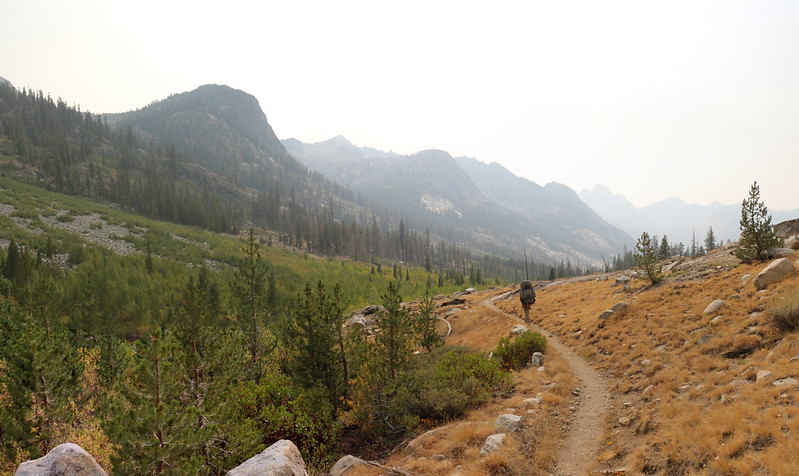 Easy hiking in the lower valley alongside Palisade Creek 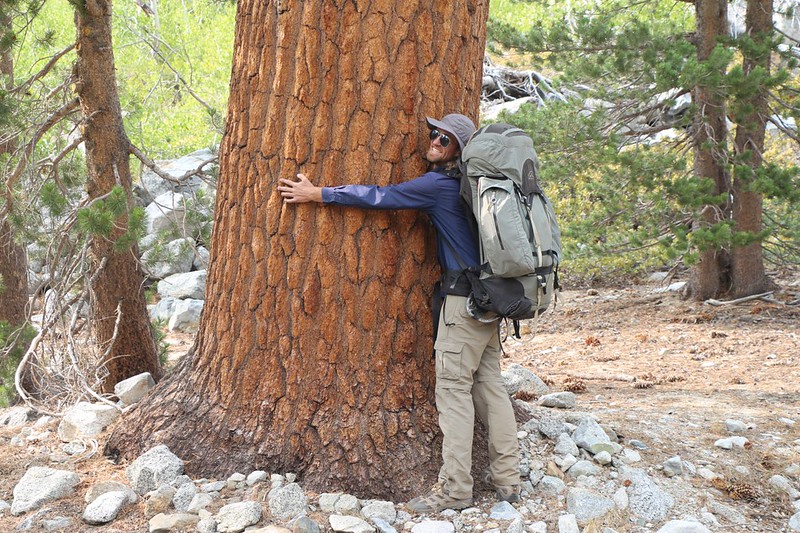 Yet another Tree-Hugger on the Pacific Crest Trail – they’re everywhere! 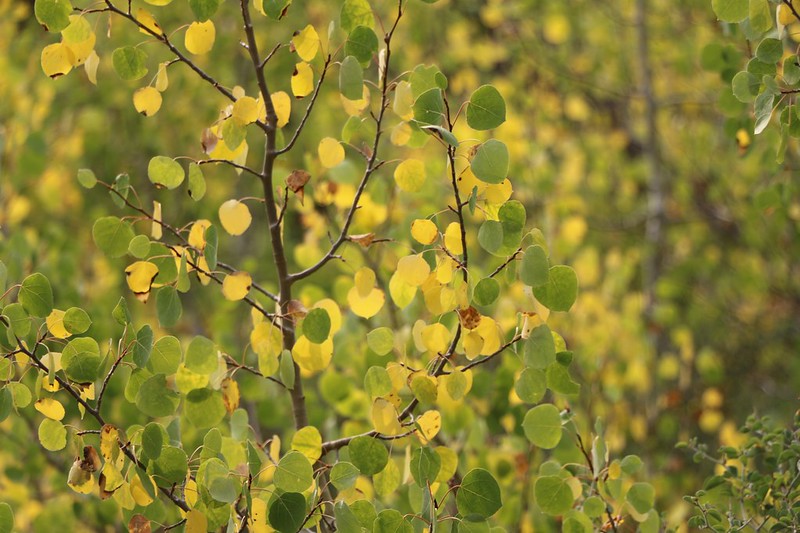 The Aspen leaves were beginning to turn yellow for Autumn even though it was still Summer, at 8500 feet

We continued down the trail, looking for a good spot to camp.  Generally speaking, our plan was to go as far as possible today so that tomorrow’s climb, upward into Dusy Basin, would be shorter and easier.  I consulted my Guthook PCT app on my phone and chose a potential campsite about a mile from the trail junction at the bottom of the valley.  I wanted to camp along Palisade Creek and wanted to avoid camping near others, which was likely down below.  And that’s what we did.  We found a pleasant spot near the creek and set up camp. 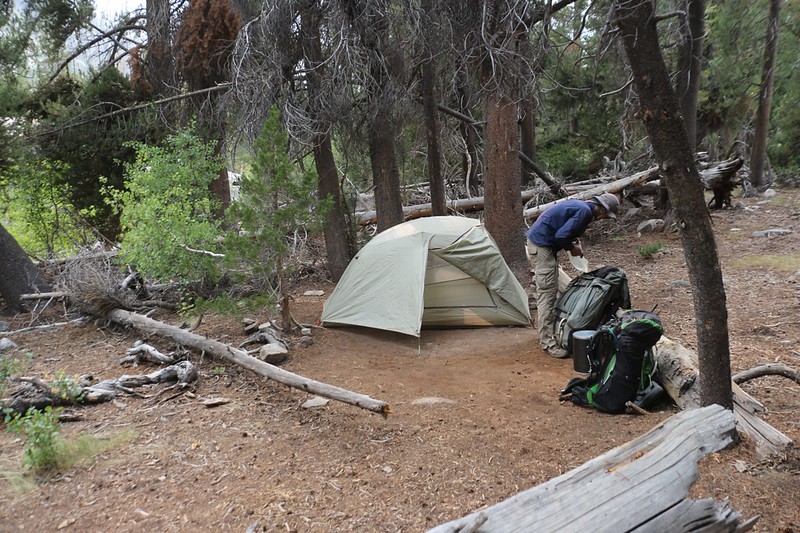 After a long day of hiking, we made a simple camp next to the creek 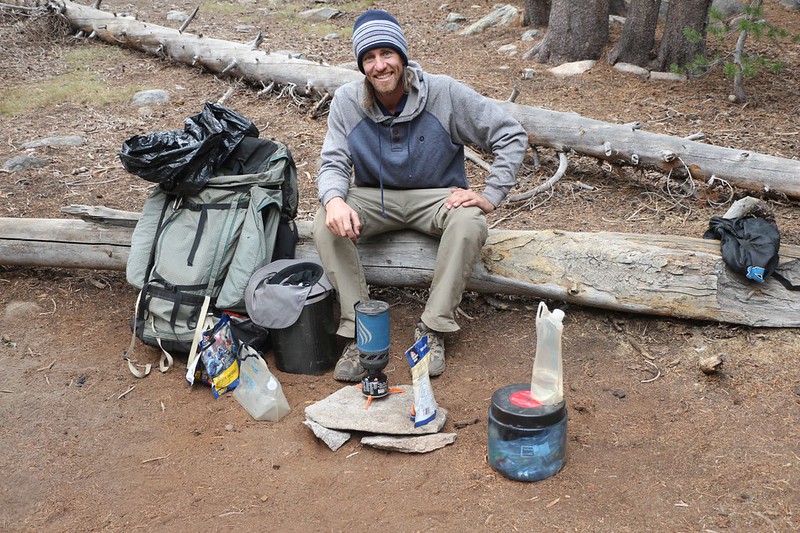 Cooking our freeze-dried Mountain House Dinner on a JetBoil stove

We cooked our dinner and ate it sitting in camp.  There were no views from here but it was peaceful to be in the forest, and the creek was flowing deep and slow and silent down below us.  I checked the GPS and it said that we were at 8400 feet elevation, the lowest camping spot of the trip.  After the freezing temperature last night at 11,000 feet, we were looking forward to a relatively balmy night down here.  There also weren’t any clouds to speak of, meaning that there wouldn’t be much of a sunset, so we went into the tent rather early.

We checked out the map and reviewed our day.  All told, we had hiked nearly thirteen miles.  1200 feet up and 3700 down.  That’s a lot of day, and our feet certainly felt it.  As did our quads.  But we also thought that it was one of the better days on this entire trek.  The views from Mather Pass, and the sheer granite immensity of the surrounding fourteeners, not to mention the stunning glaciated granite valley of Palisade Creek, all made for a  truly memorable day.