My son and I backpacked from Rae Lakes north on the Pacific Crest Trail / John Muir Trail down to the Woods Creek Suspension Bridge, and continued up Woods Creek until the junction with the Sawmill Pass Trail, just south of Twin Lakes, for a total of ten miles of hiking.  On our seven-day trek, we would be crossing a total of five passes, and this was one of the two days where we would NOT be climbing over a pass.  We weren’t entirely sure whether that was a good or a bad thing.

We woke up that morning and were excited to discover that the smoke of the day before was almost gone.  Sure, there was a bit of haze in the distance, but it seemed almost infinitely better than yesterday’s red sky, smoke, and raining ash.   We cooked up some tasty breakfast and ate it while checking out our fine view of Fin Dome.  Then we hung out for a bit taking photos along the shore of the lake before bothering to get our gear packed up.  First things first.  This was meant to be a vacation, after all.  Not a death march. 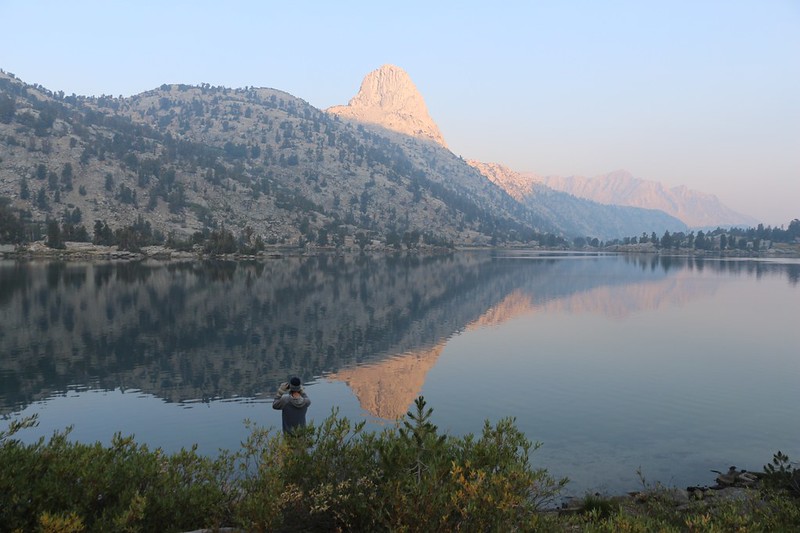 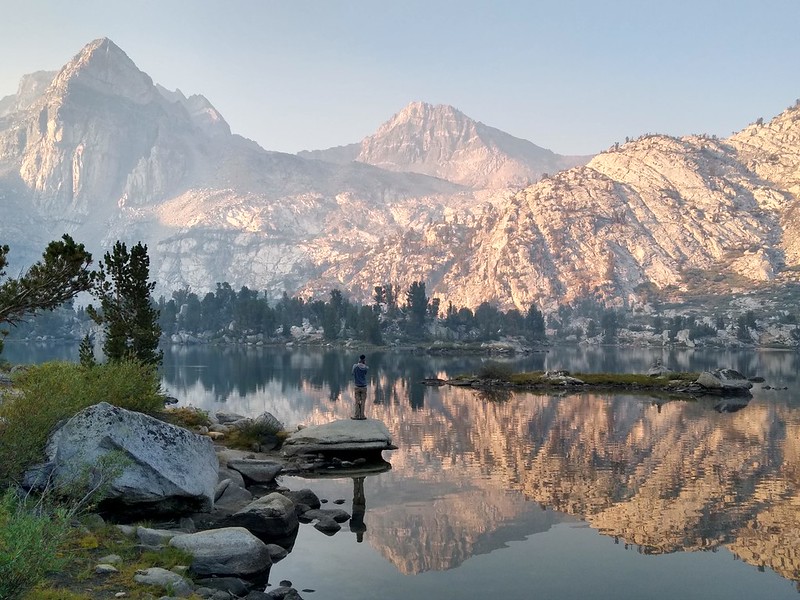 But we had to pack up everything eventually.  Our morning was going to be spent hiking downhill, about 6 miles and 2000 feet of descent.  We knew that this part would be easy enough.  We’d let the uphill hiking in the afternoon take care of itself. 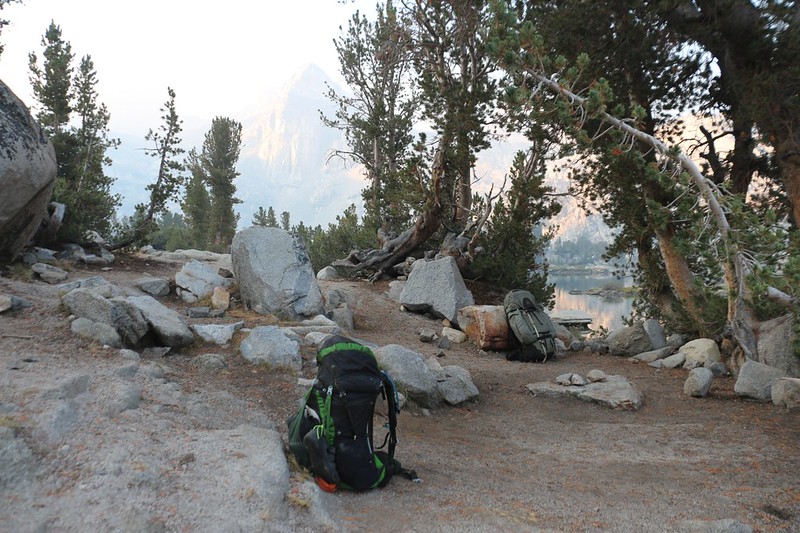 A few minutes after starting our hike, we came upon the Rae Lakes Ranger Station.  It was situated up above the trail, so we never actually visited the building.  But what was important was the handwritten note taped to the nearby trail sign.  We had heard about this note yesterday, as part of the trail gossip.

“Due to fire and smoke impacts, Sequoia, Sierra, and Inyo National forests have closed all access points to the wilderness areas.  Northbound JMT hikers should seek an exit before reaching the northern boundary of Kings Canyon National Park.  It is recommended to exit sooner rather than later.

In other words, they closed all NEW entries into the wilderness on the Monday of Labor Day Weekend.  I found the timing of this to be rather suspicious.  In fact, I still suspect that the powers-that-be never really wanted to open the wilderness at all this entire year due to the pandemic, but they had no choice because being out here is what Social Distancing is all about.  And they conveniently waited until just after Labor Day (the traditional end of Summer vacation) to close it, so that there would be far fewer complaints raised by the public.  They could (and did!) selectively close certain trails where there was a clear and present danger to hikers due to the wildfires, but not this time.  They simply slammed the door shut unilaterally.  It was a clear and classic case of  knee-jerk bureaucratic stupidity.  Sad but true.  I felt sorry for all the folks that just had their plans ruined by the Forest Service, but I have to admit to being glad that we lucked out and got started hiking the day before everything shut down. 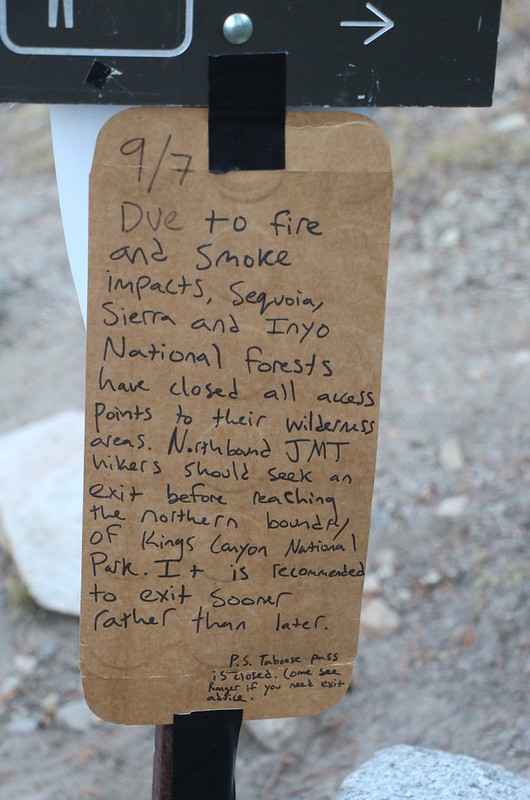 We continued north, skirting around the edge of Lower Rae Lake, and soon we arrived at Arrowhead Lake.  Yes, it is (very roughly) shaped like a stone arrowhead when viewed from above.  The trail never got all that close to the lake, but that was OK.  We mostly wanted to see it, not bathe in it.

After crossing the South Fork of Woods Creek not far below the lake, we came upon Dollar Lake, which was also part of this long chain of lakes that are, essentially, directly-linked parts of the Rae Lakes Basin.  Dollar Lake was shaped vaguely like a silver dollar, but only if you squinted and really wanted it to be.  It looked deeper than Arrowhead Lake.  The trail followed right along the western shore, where the water was so clear that we could easily see the rocks and sunken logs on the bottom.  There was also a really nice camping spot next to the lake.  But we weren’t stopping yet.

Dollar Lake and haze to the north 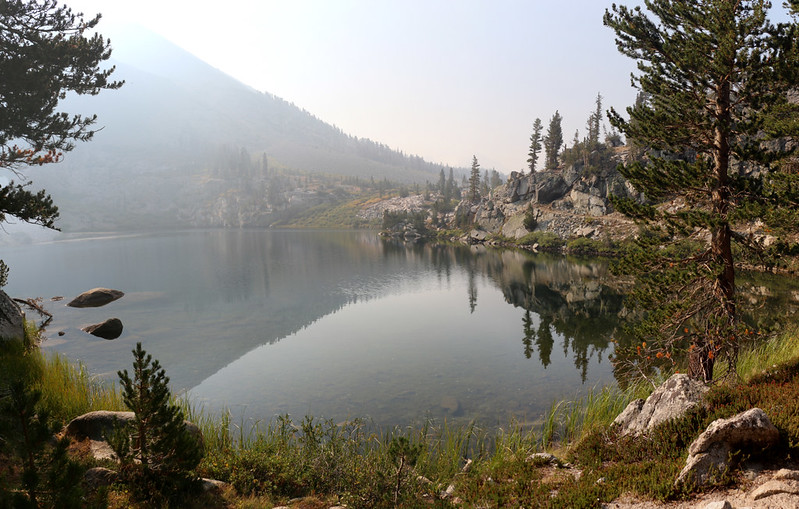 Dollar Lake and an increasingly hazy and smoky sky

The smoky haze got stronger as the morning progressed.  By 9:30 it was so thick that we couldn’t see all the way down into the valley, and the air was getting very warm.  It looked like the smoke had settled down into the valley, rather than rising, which could only mean that it would get worse as we descended.  But descend it we must.  So we hiked on.  We stopped for a break in a small side-creek, and took off our shoes so that we could soak our feet in the water.  That really hit the spot! 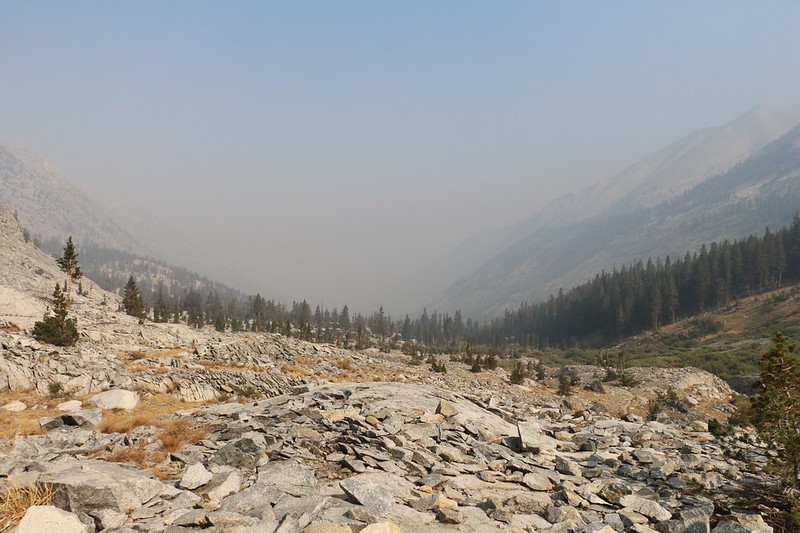 Looking north on the PCT, down into the hazy valley below Dollar Lake, where the South Fork of Woods Creek flows 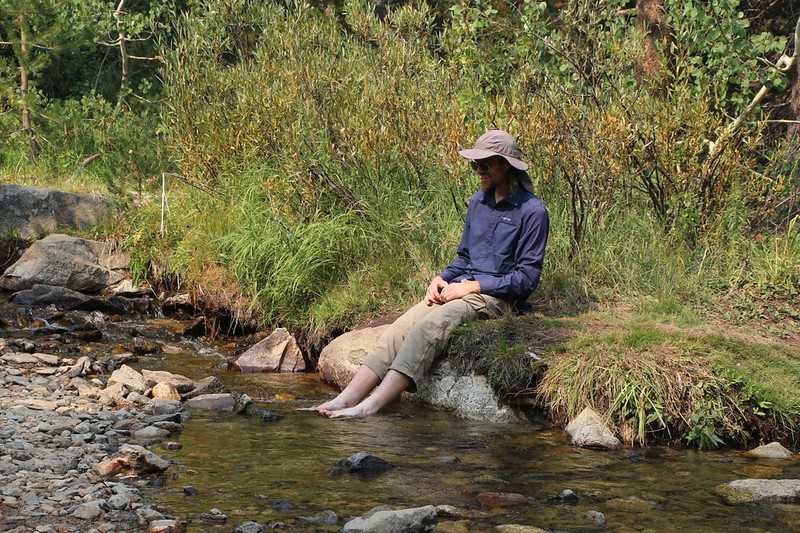 We cooled off our hot feet in the creek that descends from Lake 10315 to the JMT, and it felt icy but great!

A mile or so later, we arrived at the lowest point of the day’s hike:  Woods Creek.  And, most importantly, the famous Woods Creek Suspension Bridge.  I tried to find some statistics or specs for this bridge on the internet, but I had no luck.  I have no idea when it was built or the length and height of its span.  I’m thinking that it was at least one hundred feet long.  And it was a marvel of engineering, its surface being constructed of a light steel catwalk grating.  It reminded me of backpacking in a way, in that it consisted of the lightest materials that would still do the job.  In fact, it was so light that the sign insisted that only one hiker cross the bridge at a time!  And once we crossed it we knew why:  The catwalk swayed and rolled with every step, while the cables creaked, and the walking surface bowed downward under the hiker’s weight.  The fact that you could see directly downward through the thin steel bars of the catwalk was even more entertaining.  If you’re scared of heights you might not like this bridge!  But we loved it.  What a fun thing to find, way out here in the middle of nowhere! 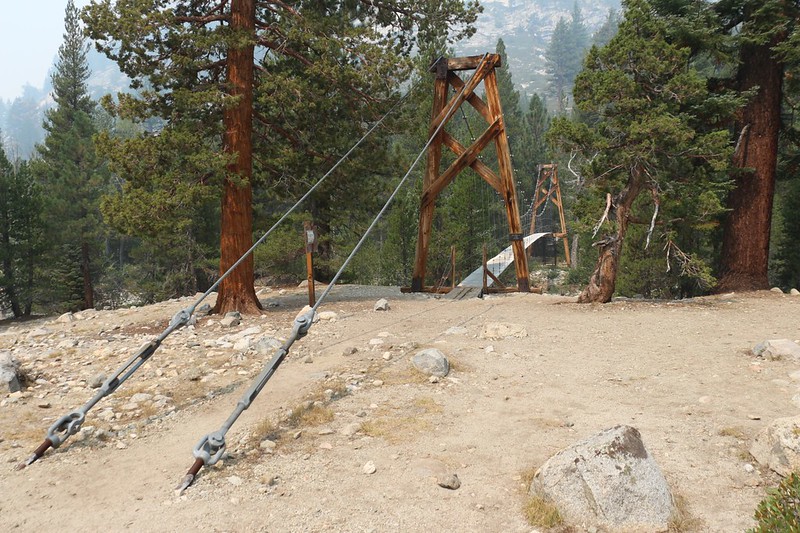 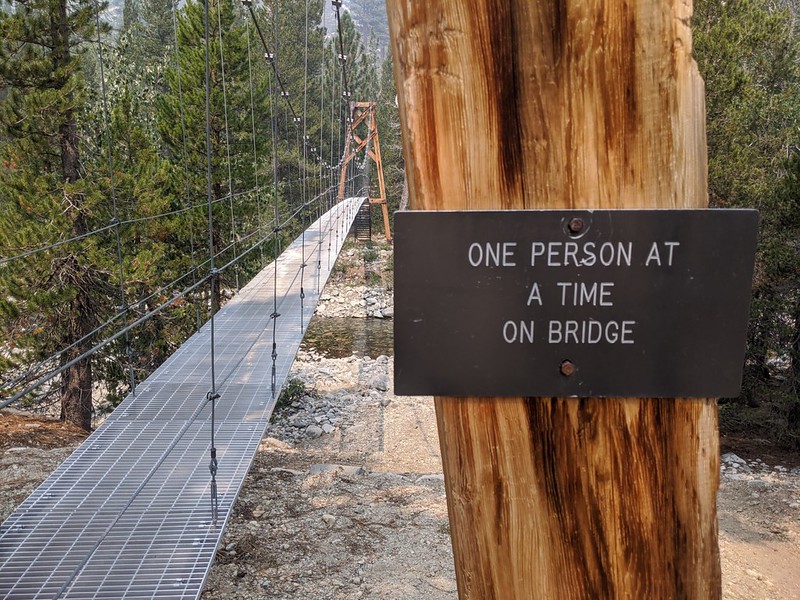 GoPro video as I crossed the Woods Creek Suspension Bridge 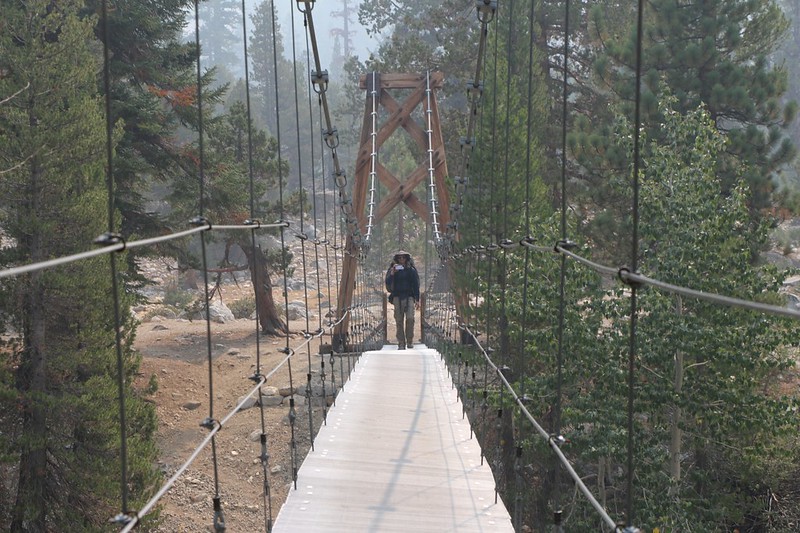 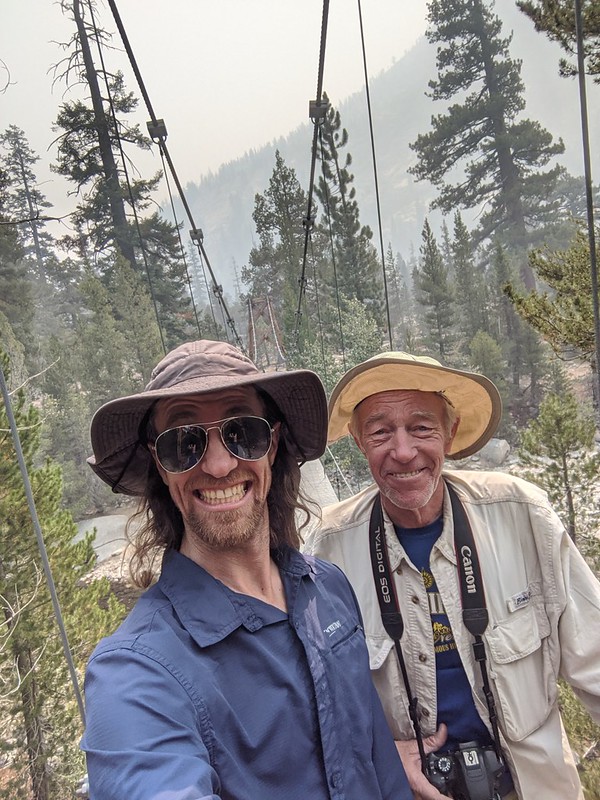 We took a double-selfie on the Woods Creek Suspension Bridge 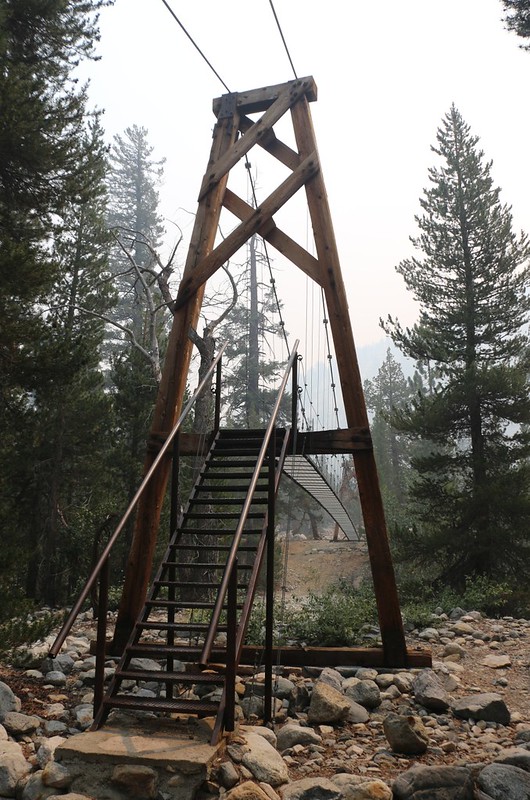 After a fun crossing (and partial re-crossing), we stopped for a lunch break on the far side of the bridge.  We watched the creek flowing by and imagined what it must be like during the Spring melt:  Huge and dangerous.  The foot of the stairway on this end was probably underwater.  And we also noticed that livestock had no choice but to ford the creek, as there was no way you could persuade a horse to cross that bridge, even if it was strong enough to support one.  We brought out the map and checked our progress.  Thus far, we had descended 2100 feet in six miles, and ahead of us was the long climb toward Pinchot Pass.  We were only climbing about halfway to the pass, and intended to stop for the night somewhere near Twin Lakes. which was another 2000 feet and four miles away, all of it uphill.  What goes down must come up, as the PCT hikers say.  It’s not like we didn’t know about it.  In fact, we had planned this madness. 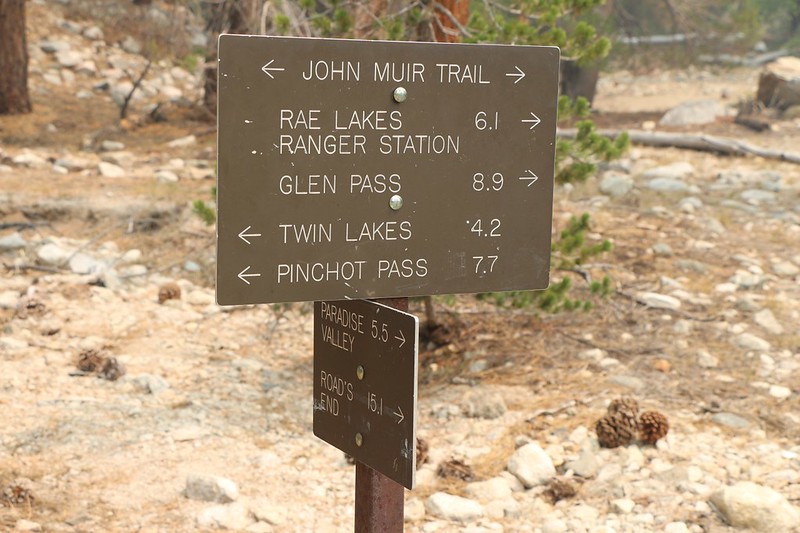 We started hiking north up the main branch of Woods Creek, and it wasn’t long before we stopped for yet another break.  This time it was due to some amazing granite water slides and a waterfall into a deeply carved pool.  Once again, we imagined what this place was like when the creek was angry with snowmelt.  The lack of vegetation and the water stains on the granite made it clear that this creek had been known to rage with whitewater.  And we were even more thankful for the suspension bridge down below.  We took far too many photos and videos of this natural waterslide before continuing onward. 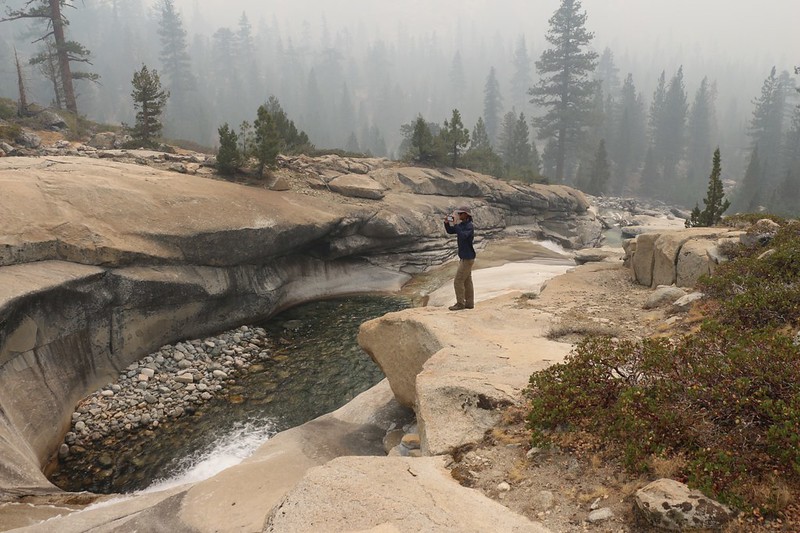 It was a fairly steep trail, and it was built up above the streambed for obvious reasons.  In some spots the creek cut through looser soils full of rocky talus, and other times it flowed over solid granite.  We also discovered several small waterfalls.  It was very pretty, but the smoky haze was thick down here in the bottom of the canyon, and we knew that there was a lot of High Sierra Beauty that we were missing.  But it couldn’t be helped. 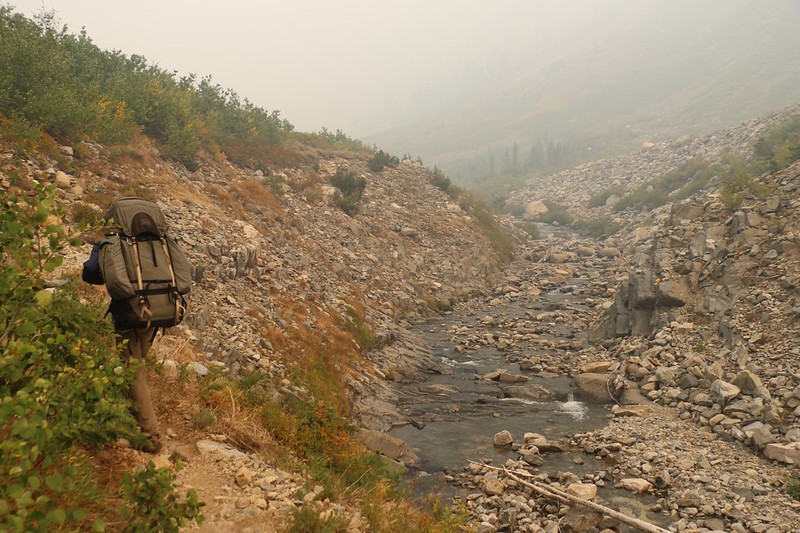 Video of a waterfall on Woods Creek 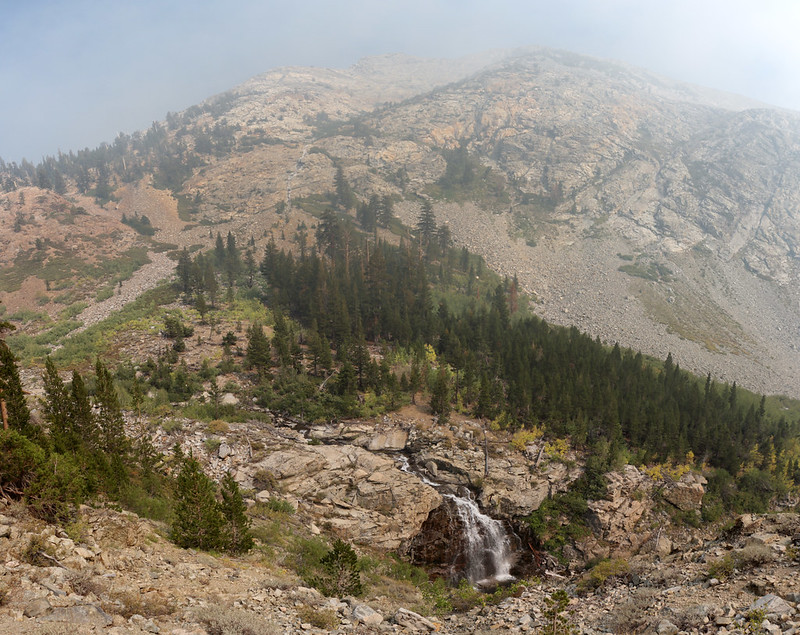 After an hour or two of our steady grinding ascent, I looked up in the sky and saw some blue color to the north.  “Blue sky!”  I shouted out to my son.  “Woo hoo!” we shouted.  This was what we had been praying for.  I knew that the weather was going to shift a bit this day, due to a storm moving by far to our north, but I wasn’t sure what the result of it would be.  It could portend either more smoke, or less, depending upon which fire this haziness was coming from, either the SQF Complex to the south, or the Creek Fire to the north.  The advent of blue sky to our north seemed to vindicate my initial hypothesis that this haze (and yesterday’s phenomenal smoke plume) was SQF-derived.  We hiked on, ever-northward, and soon the mountains surrounding us became crisp and clear and oh-so-much more beautiful. 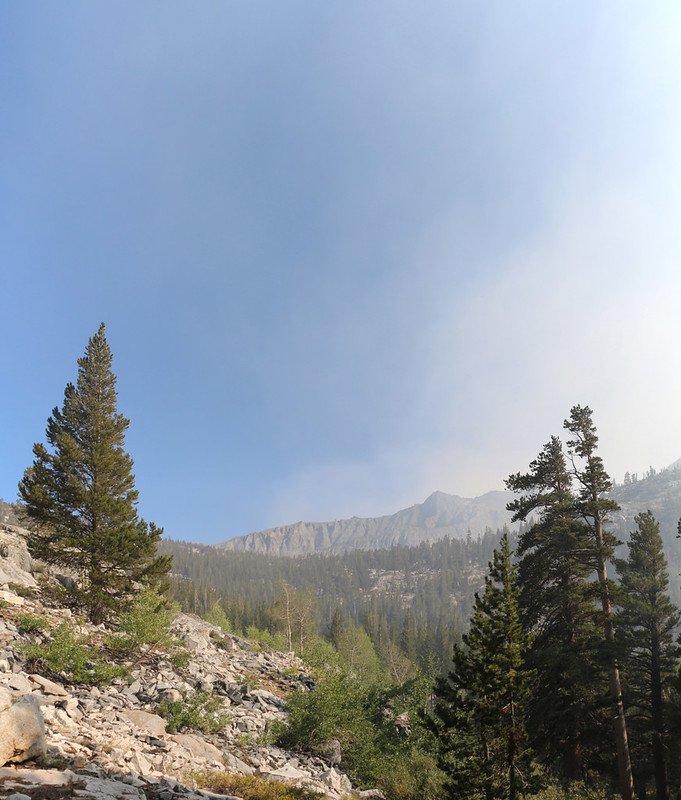 We got a glimpse of clear blue sky ahead – maybe we could leave the smoke behind!

We were still about a mile short of our goal of camping at Twin Lakes when we saw a nice little campsite with a view.  It was conveniently located next to a small creek with clean clear water.  We looked at each other.  Did we really want to keep on climbing uphill for another mile?  It was still hot out and we were pretty darn tired.  We’d already hiked about ten miles that day.  Tomorrow’s hike wasn’t looking too strenuous, so we decided to put off the inevitable for another day. 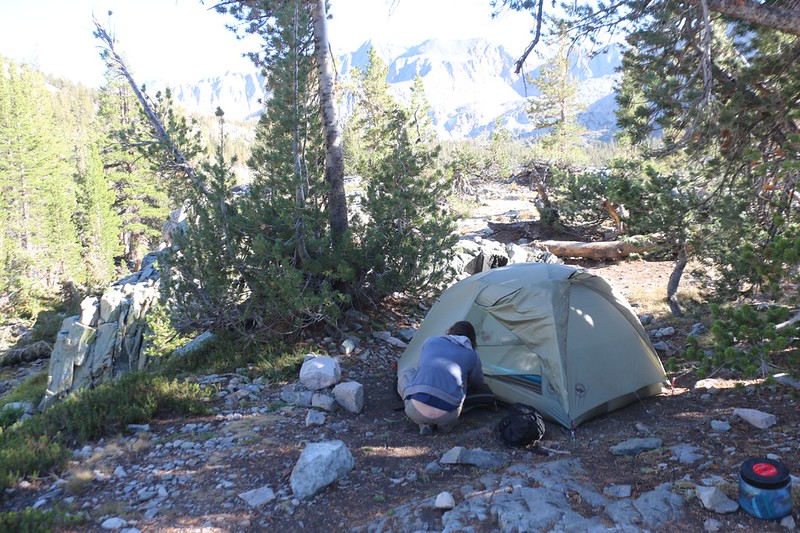 Our tent and campsite on a small ridge near a smaller creek, just above Woods Creek

We set up the tent, filtered some water, and cooked up some dinner.  This spot was just fine.  We sat out on the granite ridge and enjoyed the view east toward Sawmill Pass.  It was nice to see blue sky and crisp mountains unaffected by haze.  The smoke was still out there, of course, but it was limited to the south, and we weren’t going to complain as long as it stayed down there where it came from. 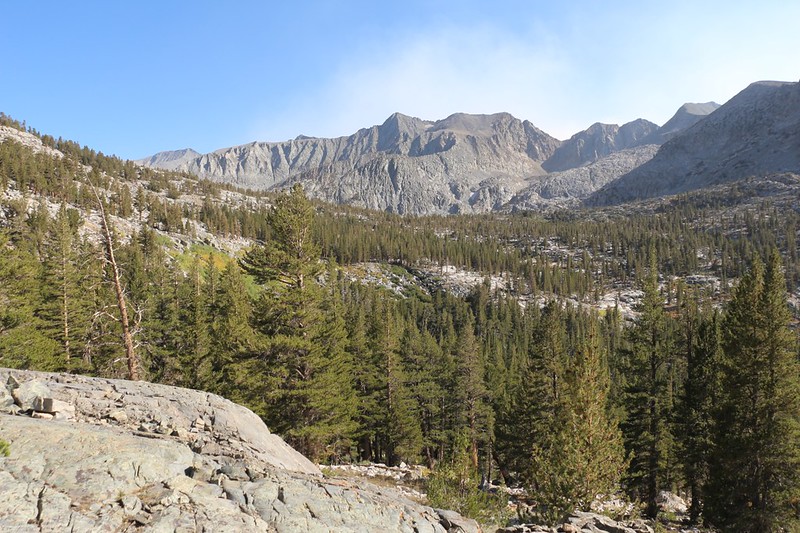 Looking east toward Sawmill Pass and Woods Peak from our campsite 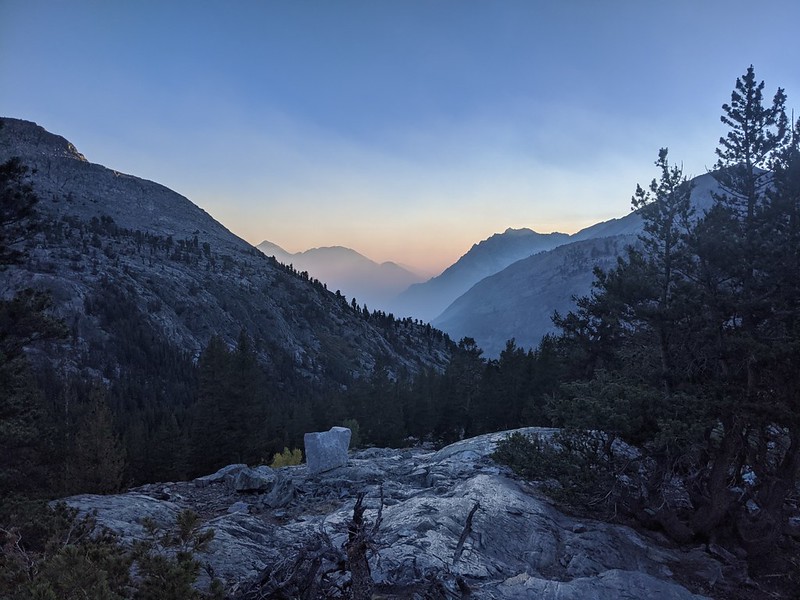 We were pretty happy with our progress thus far on the trip, and were super-stoked to leave the smoke behind.  Let’s face it:  One of the main reasons for hiking out here was to see the amazing mountains.  If all we wanted was exercise we could do that anywhere.  We checked the map and looked at the plan for tomorrow’s hike.  Another ten miles or so, which didn’t look to be a problem, but this time we’d be climbing over our third pass of the trip, Pinchot Pass, at 12093 feet elevation.  This might prove more challenging.  And if there were great views without smoke from up there, then more power to us!  So we set the alarm for 5am and headed to bed.