We hiked from Moraine Lake to the Big Arroyo Camp on the High Sierra Trail, about seven miles total, which started at 9300 feet and climbed up to 10600, before heading back down to 9500.  It was going to be a good solid day of hiking, and we decided to leave early in order to attack the uphill part while it was cool.  As a benefit, we might get into camp before the inevitable rain and thunderstorms arrived.

The alarm went off at O’Dark-Thirty and we sat up in the pre-dawn quiet of the tent.  Or at least I did.  I could tell that Vicki was awake, but she was also nice and warm under the goose down, and was resisting the call to action.  But it didn’t last, of course.  Soon we were both dressing for the day and packing up everything in sight.  It typically took us about two hours to pack up if we also cooked breakfast, but only an hour and a half if we opted for a no-cook “bug-out” breakfast.  This seems like an awfully long time to me, but it wasn’t like we were sitting on our butts yawning.  No, we were busy doing stuff the entire time.  There’s a lot of minutia to take care of, I guess.  I was also glad that there wasn’t some Outdoor Efficiency Maven  or Time Management Consultant around to take notes on improving our processes.  This is supposed to be a vacation, after all.  We’d be ready when we got ready. 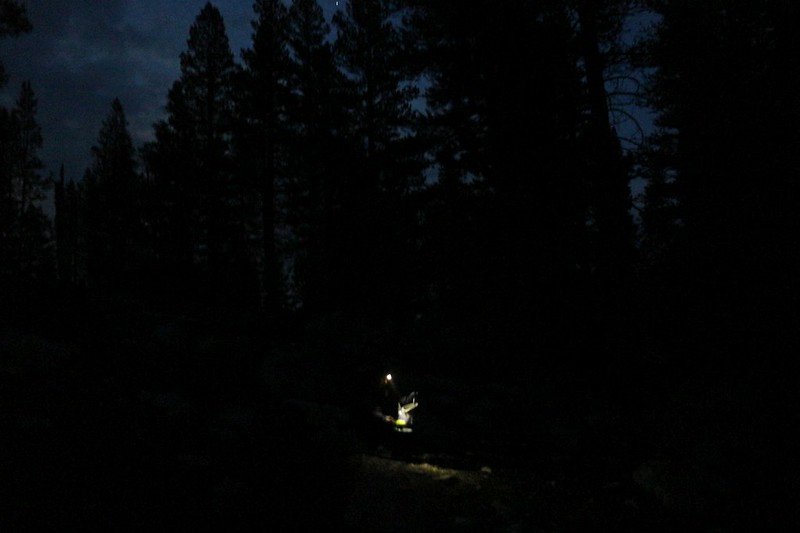 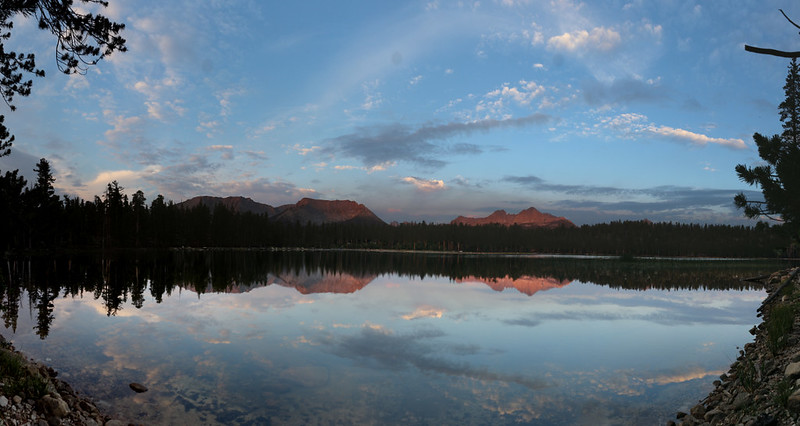 Our plan worked perfectly, just the same.  We began hiking at the crack of dawn, and got to see the lake in its calm reflective beauty.  We waved good-bye to our neighbors on the way out, and wished them well, as all of them were heading east.  One set of young guys had come in late yesterday, and they must’ve gotten drenched as all of their gear was spread on big logs to dry.  This was all the more incentive for us to wake up early and get moving. 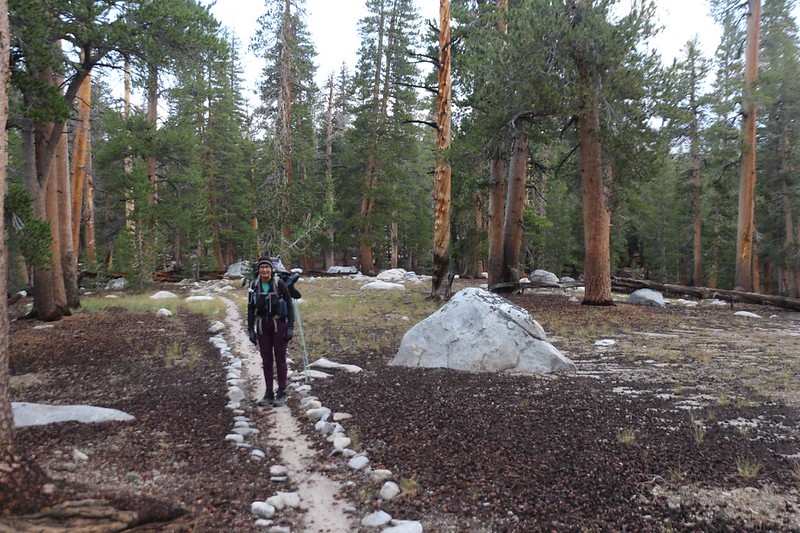 Besides visiting Moraine Lake, one of the other reasons for taking the High Sierra Bypass Trail (rather than the boring main trail) was the excellent overlook along the way.  This granite clifftop looks out across Big Arroyo, which is a canyon large enough to rival even the mighty Kern Canyon.  The canyon is called Big Arroyo and the creek that flows down in the bottom is also called Big Arroyo.  And both of them headed downhill to join with Kern Canyon.  We spent a few minutes taking photos and videos.  This was one of those spots that make hiking the High Sierra Trail truly worthwhile, and we weren’t about to pass it by. 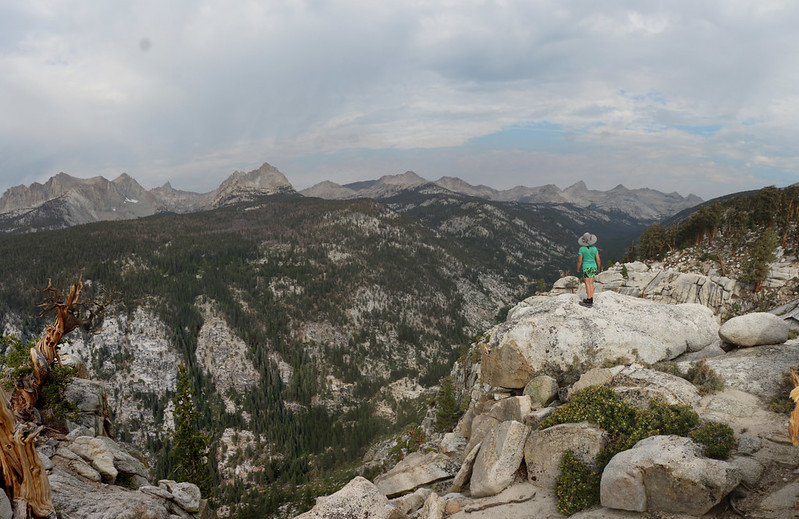 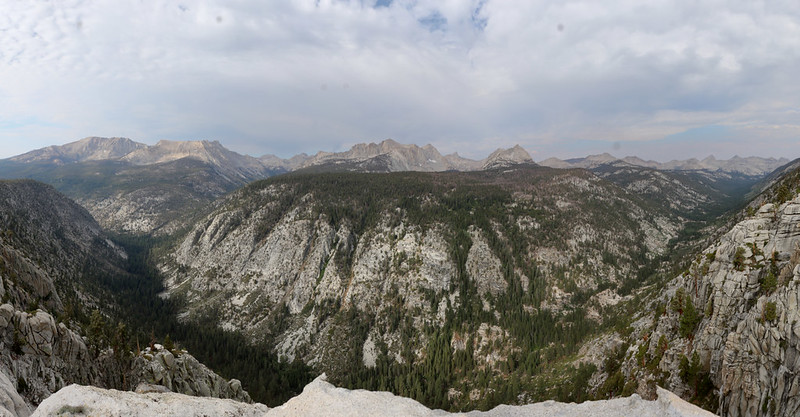 Wide panorama view to the west of Big Arroyo 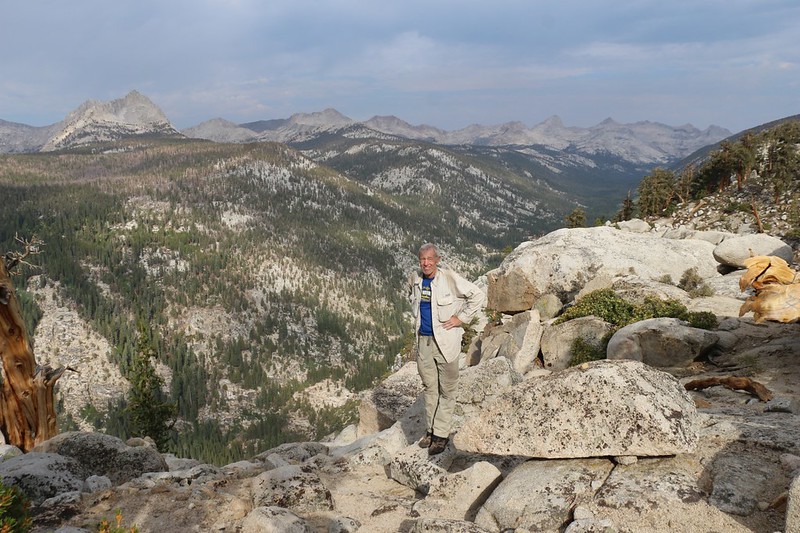 Me at the viewpoint spot

After about three hours of continuous uphill hiking, we finally made it to the junction of the bypass trail and the main High Sierra Trail.  There was a very pretty meadow there, up at one of the headwater branches of Chagoopa Creek, and we got some splendid views of Mount Kaweah in the distance over the Chagoopa Plateau.  Vicki decided that this was a great time for a nap, as the sun had finally risen enough to heat things up.  We both took off our boots and had some snack and a well-deserved break.  We’d climbed almost 1000 feet of the 1300 we had to climb, and we deserved to celebrate. 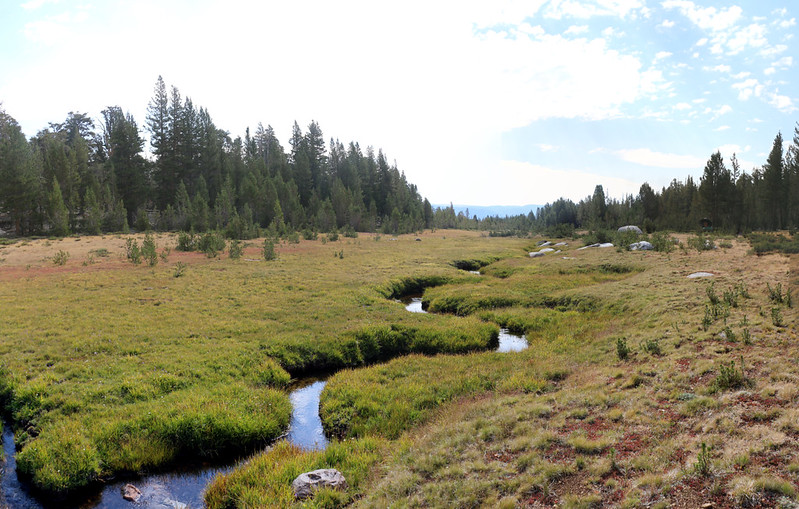 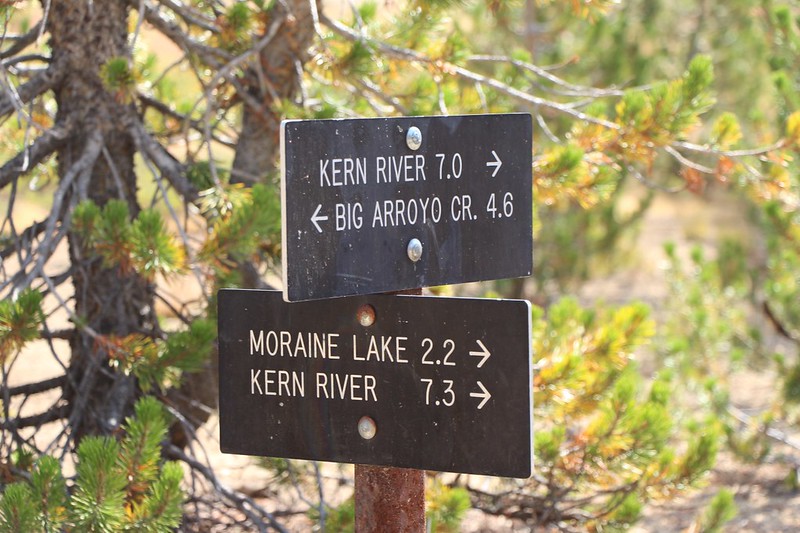 Trail sign showing that the Moraine Lake Bypass Trail is only a tiny bit longer than the HST – totally worth it!

Vicki woke up feeling refreshed, and we continued hiking, climbing uphill along the upper rim of Big Arroyo.  Sometimes the trail went inland, through trees and granite boulders, but once in a while it traveled right along the edge of the canyon, and that was when we got the best views to the southwest.  We stopped for lunch at one of these impressive views, and it was great just to look out over the world from such a vantage.

As the day progressed, the clouds continued to build, just like yesterday.  There had even been a tiny sprinkle, but it didn’t last.  We knew that it was going to rain again.  The only question was when.  But there wasn’t much we could do except keep on hiking, and that’s what we did. 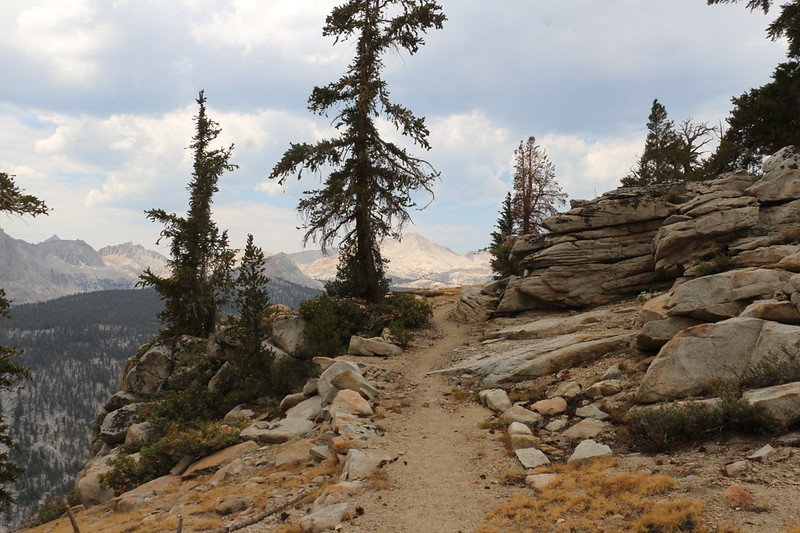 Great views over Big Arroyo as we continued northwest

Panorama view of Big Arroyo, with Kern Canyon on the far left 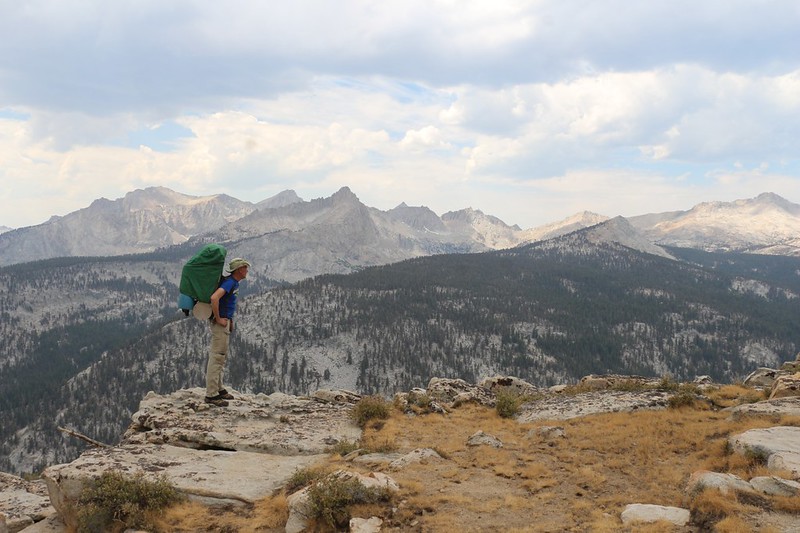 Me. posing with my big backpack (and rain cover) looking out over Big Arroyo

We climbed uphill to what was shown as a lake on my topo map, but it turned out to be all dried up for the season, just dried grass and black-stained rocks in a shallow basin.  It was one of those imaginary lakes, I guess.  After that, however, the trail began its 1100 foot descent to the campsite at the bottom of Big Arroyo.  Luckily, the trail sloped gradually down into the canyon while the canyon’s bottom gradually climbed up to meet it.  Perfection! 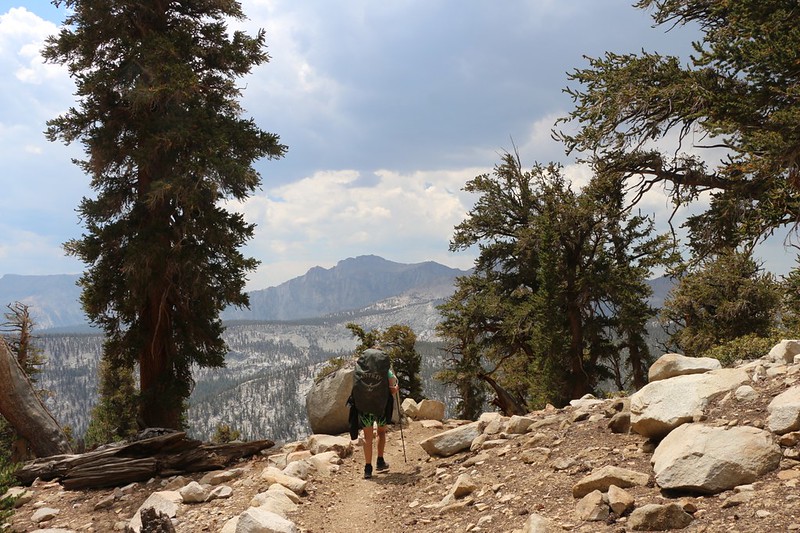 Storm clouds were drifting by, heading north, so we covered our backpacks and continued hiking into Big Arroyo

We hurried onward, flying down the trail, ever-mindful of the dark clouds scudding by across the valley.  Unfortunately, we had more than two miles yet to hike, and it took a lot longer than we wanted it to.  We kept hearing distant thunder as we hiked, and we could see the virga from the clouds to the west, and we knew it was only a matter of time.  Which ran out before we made it to the bottom, I’m sad to say. 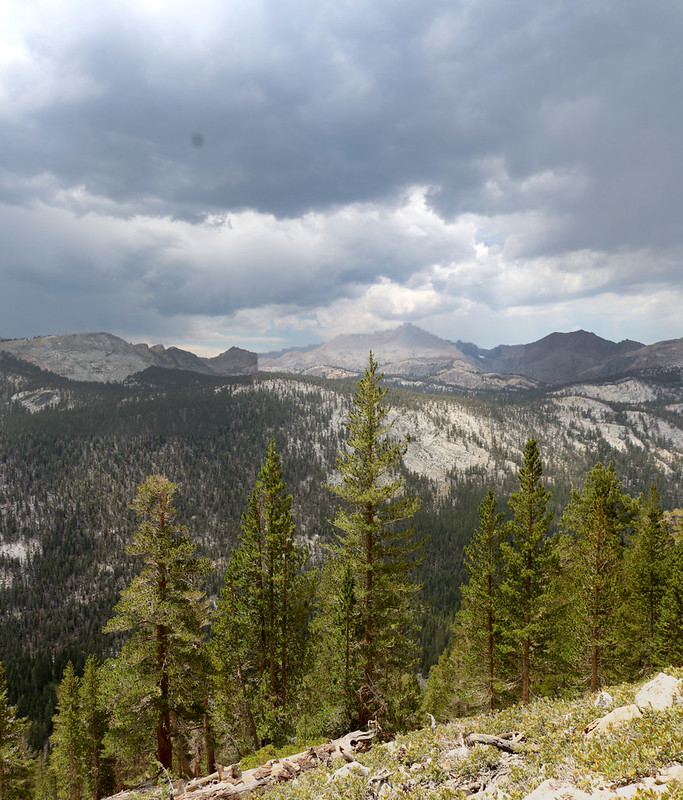 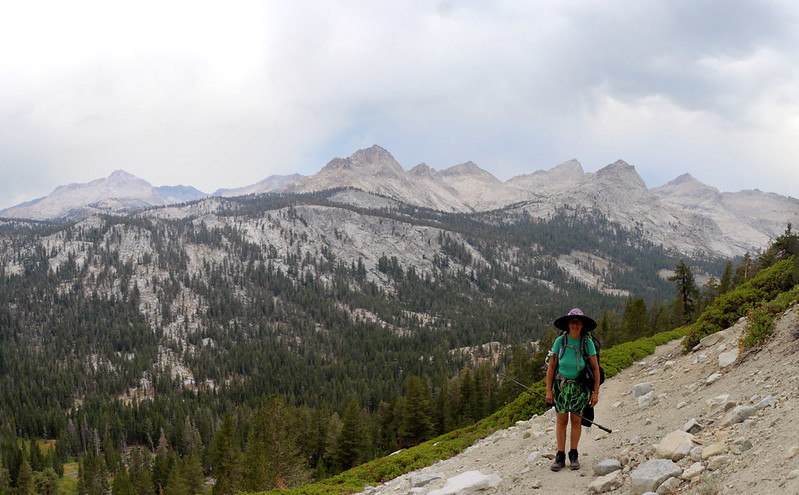 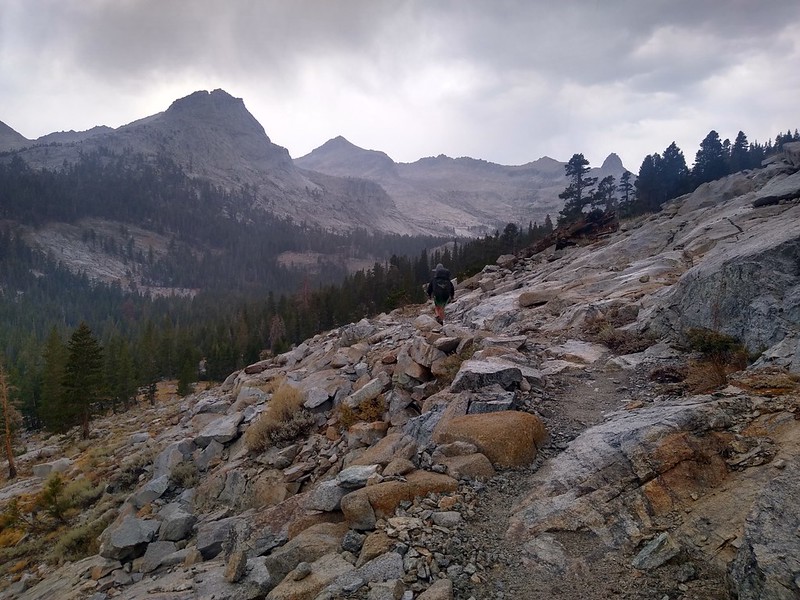 We got out our cheap plastic ponchos and put them on, but the wind picked up and blew the rain and ponchos all over the place anyway.  Still, they were better than nothing, and we hiked on with renewed vigor.  Onward! 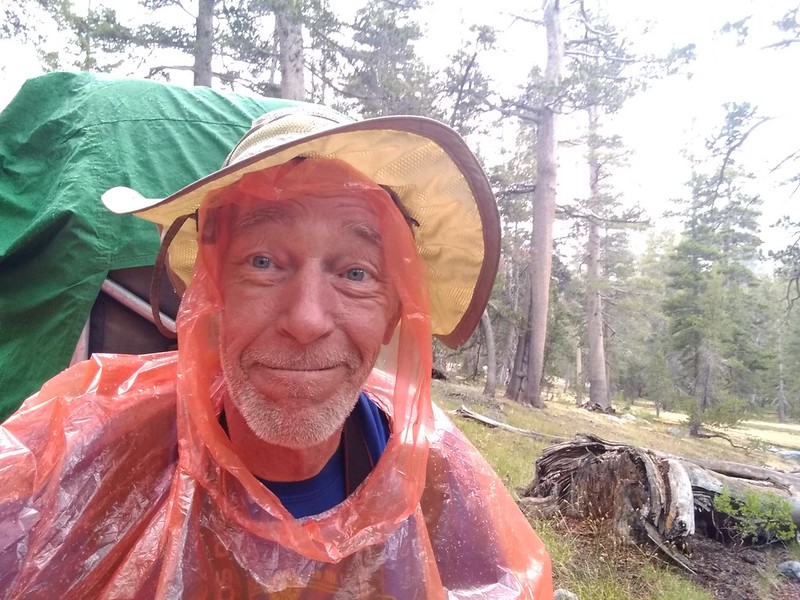 By the time we reached the campground the rain was only sprinkling sporadically.  We kept the raingear on due to laziness more than need.  We checked out the old Ranger Patrol Cabin and found an unoccupied camping spot down below it near a small creek.  We set our packs down under a pine tree to keep them dry and set up the tent.  I got out the air mattresses and blew them up, and then we began loading our gear inside. 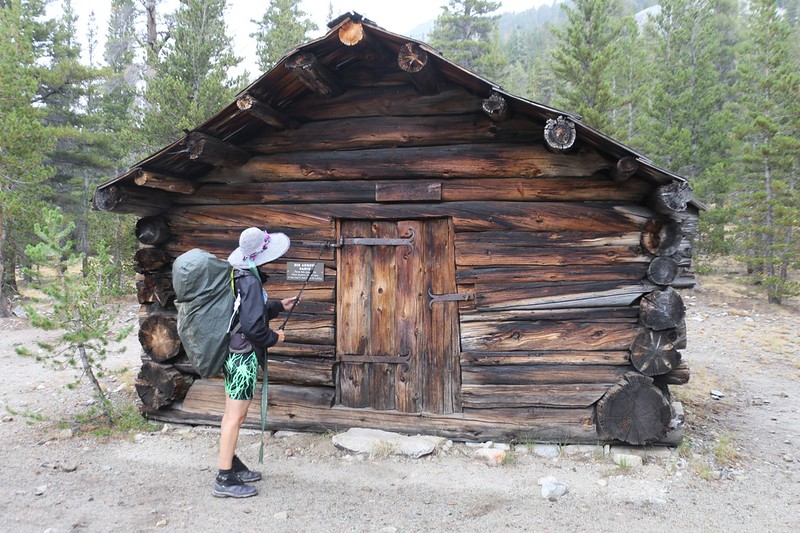 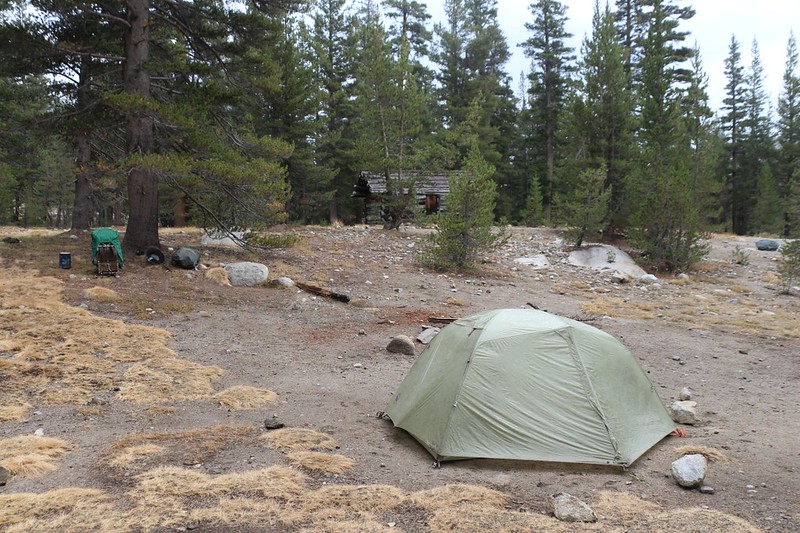 All in all, we hadn’t gotten very wet on the trail, and we wanted to keep it that way.  So we entered the tent and got dressed in our warmer night clothing.  We listened as the thunder continued booming over the mountains to the west.  I mentioned to Vicki that tomorrow we would be hiking over that way, crossing the Great Western Divide, and it looked like we might get a bit of a soaking.  We decided that there wasn’t much we could do about it except to get up early, and we left it at that. 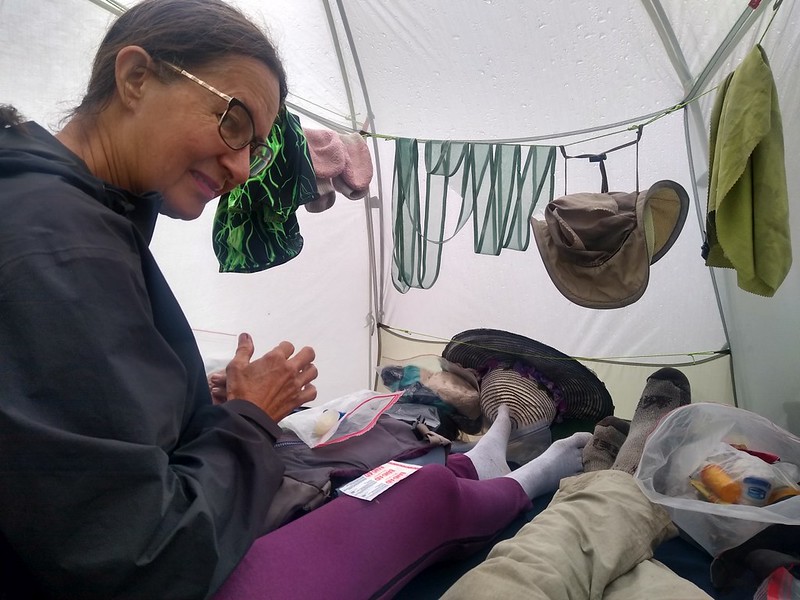 During a break in the rain, we got all of our gear into the tent and soon felt cozy and warm

As usual, the rain and clouds let up as the sun got lower.  We got out of the tent, filtered some water, and cooked up our dinner.  We ate it in camp as there weren’t any great view spots down here at the bottom of a canyon.  We took a brief walk afterward and said hello to some of our neighbors down the trail a ways, and then we headed back to the tent.  We got out the map and checked out the plan for tomorrow.  We would be climbing 1200 feet to the famous Kaweah Gap, then descending 2500 feet to Upper Hamilton Lake.  Eight miles of hiking.  And once again, Vicki decided to break camp in the dark, so we could get the climbing over with while it was still cool.  I agreed.  Time for bed!  All in all, it had been a long and fun day on the trail.