On this section of the High Sierra Trail, we hiked from the Big Arroyo Camp up to Kaweah Gap, for about 1200 feet of climbing over 3.5 miles of trail.  And, once again, Vicki decided to break camp in the dark, so we could get all of the climbing over with while it was still cool.  This approach has now become our Standard Operating Procedure.  Why?  Because it works! 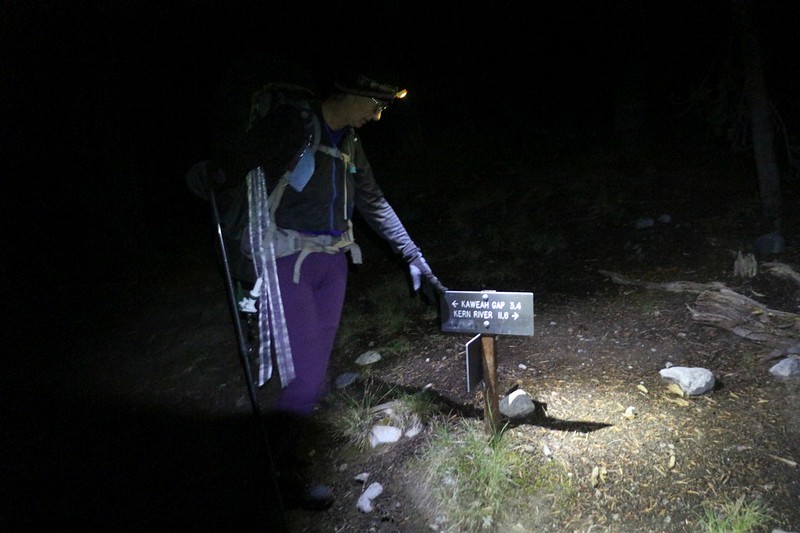 A long hike, a long climb, and a lot of thunderstorms made us get up extra early

We packed up, started hiking, and life was good.  The air was cool and the trail was easy.  The Big Arroyo valley was much wider up in this section, and we had decent views of the surrounding peaks.  After a mile or so the trail crossed the creek, and we continued up the western side of the canyon. 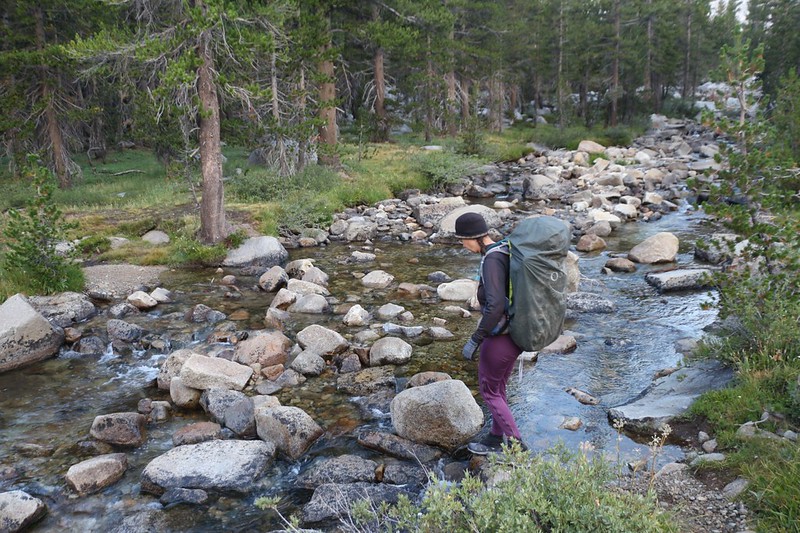 It was an easy rock-hop crossing of Big Arroyo during mid-August of 2020, a fairly dry year

Leaving early was working to keep Vicki cool, as we hiked along in the shade of the Kaweahs to the east.  Soon the rising sun lit the peaks and canyon wall to our left, and we knew that it would reach us eventually.  Luckily, there were already plenty of clouds drifting by up above us, so shade might still be a possibility.  The views also got better as the trail climbed higher, and the canyon spread out into what could be called a high alpine basin, complete with lakes and smaller creeks.

Looking south down Big Arroyo, with Lippincott Mountain on the far right

The trail began climbing in earnest as we neared Kaweah Gap.  Between the slope and the sunshine, Vicki was soon wearing her shorts and spritzing her head with water to stay cool.  This kept her happy, but we both knew that we’d have to take a big rest up at the gap, and that became our main goal.

The views became excellent on that final stretch of trail.  We were able to look down into the Nine Lakes Basin, and also to see far down Big Arroyo.  Meanwhile, the peaks of the Kaweah Range came into view above the canyon walls to the east.  Beautiful!  Views like these are one of the main reasons we hike up in the High Sierra.  It’s our reward for all the hard work, and we wouldn’t have it any other way. 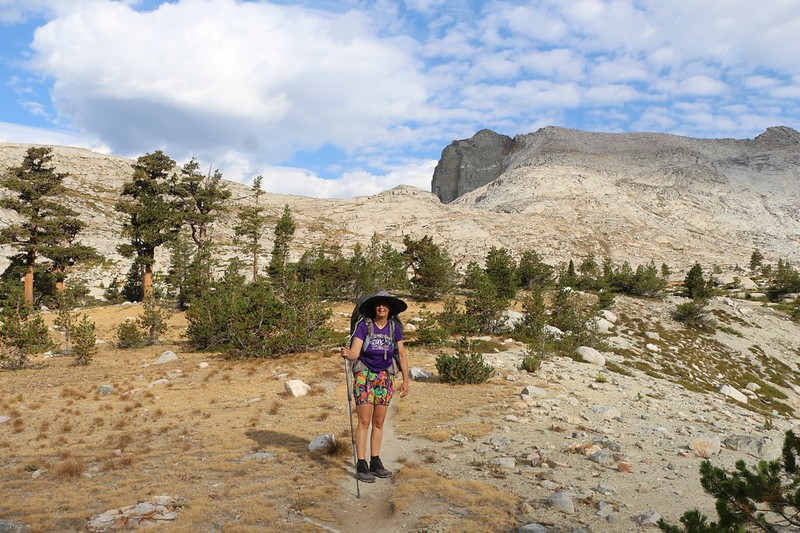 As the High Sierra Trail turns west, we hiked in the sunshine, heading directly for Kaweah Gap and Mount Stewart 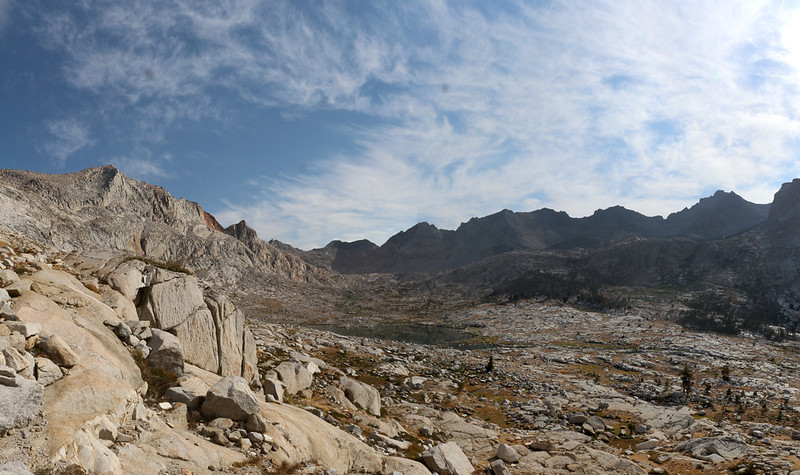 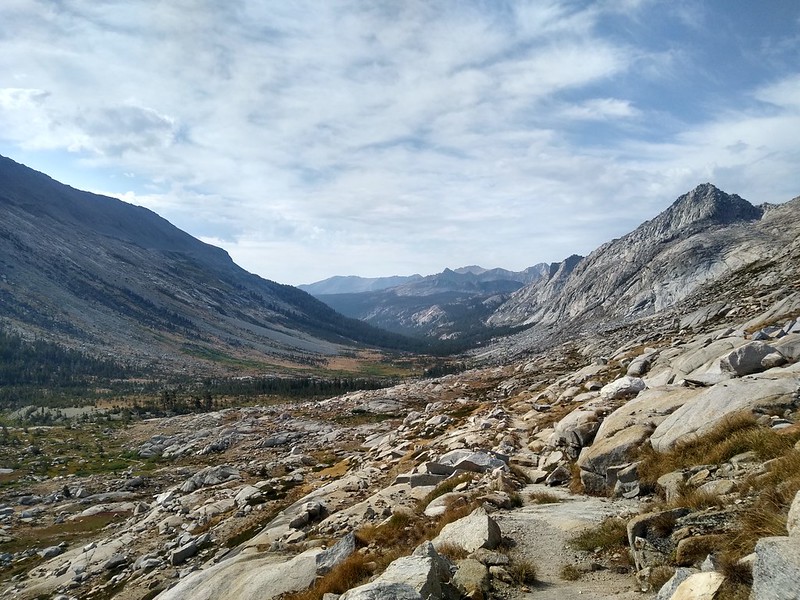 Looking back down Big Arroyo from the HST near Kaweah Gap

Panorama view north from the trail just below Kaweah Gap – Vicki is almost ready for a nap!

I have to admit that I was taking photos and videos like crazy as we climbed the final switchbacks that led to the gap, and that’s why I had to split up this day’s hike into two separate pages.  As you’ll see on the following page, there were even more amazing views in store for us!  In other words, this page is just the warmup exercise. 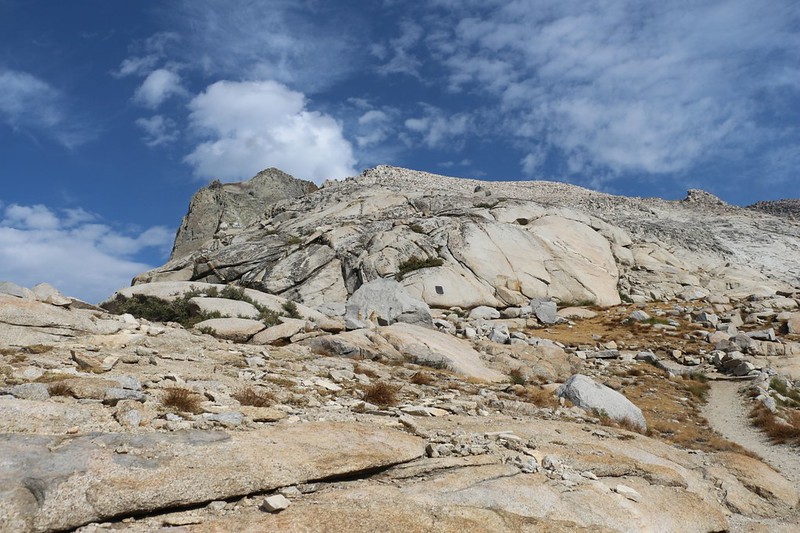 Kaweah Gap, Mount Stewart, and the brass plaque as we near the top of the switchbacks 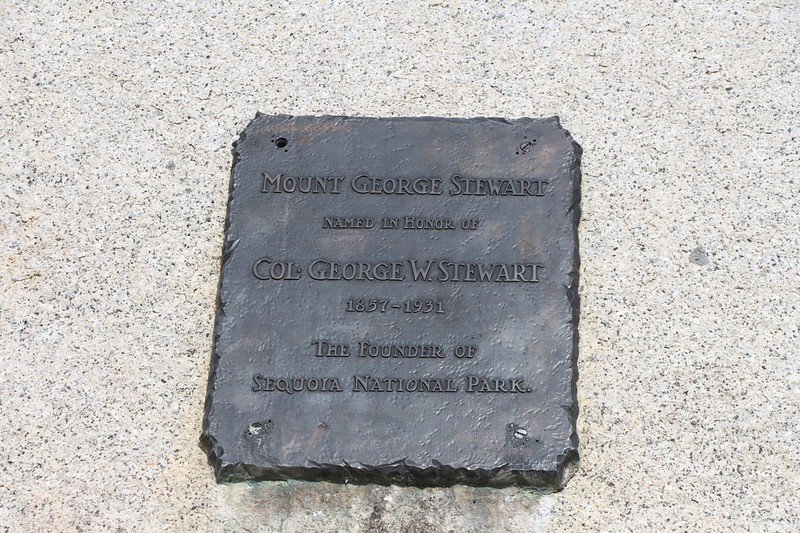 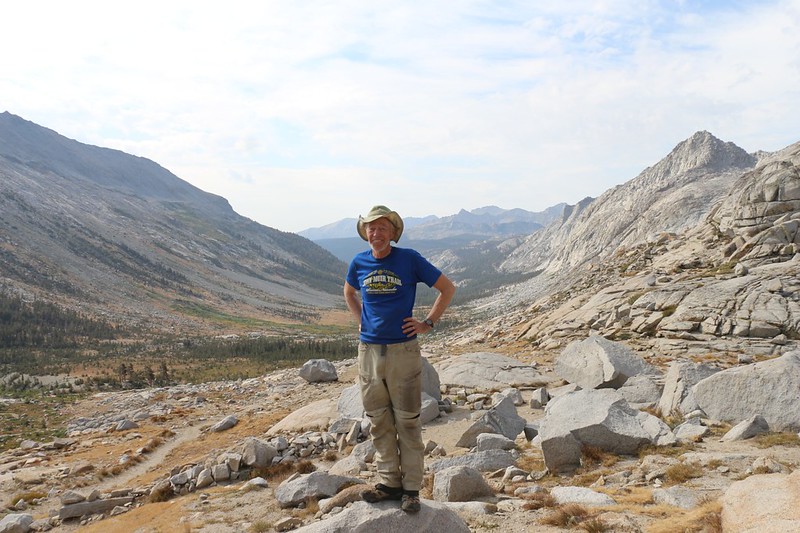 Me, posing at Kaweah Gap, looking south down Big Arroyo

Once we got to the gap, we put down our packs and took a big break.  The day’s climbing was over.  Vicki took a nap near the wall out of the breeze, and I took off my boots to air out my socks.  Then I simply took in the awesome views while Vicki slept.  Good times!