We hiked down Kern Canyon on the High Sierra Trail, from our camp at Whitney Creek (south of Junction Meadow) to Funston Meadow, and checked out the Kern Hot Springs along the way.  All told, we hiked 8 miles and descended 1000 feet, ending up at 6800 feet elevation, the lowest point on our hike thus far.

We packed up in the dark, well before dawn, as we knew that it was going to be a hot day at this altitude.  We figured that if we got an early start, the sun wouldn’t hit us down in the bottom of the Kern Trench (which runs north-south) for hours and hours.  Also, we didn’t fail to notice the red clouds in the sky as dawn approached, and we wondered if that meant a return to “Sierra Summer Afternoon Thunderstorm Weather.”  If this happened, we really wanted to get into camp early and get the tent set up before the rain hit.  In order to hurry the process, we even ate a no-cook breakfast of fruit bars (for Vicki) and pop-tarts (for me) on the trail to save some time.  We started hiking right at dawn. 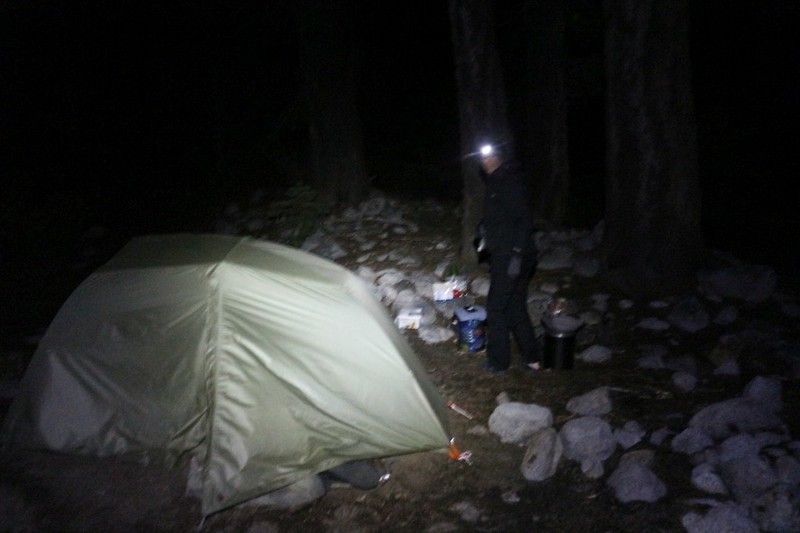 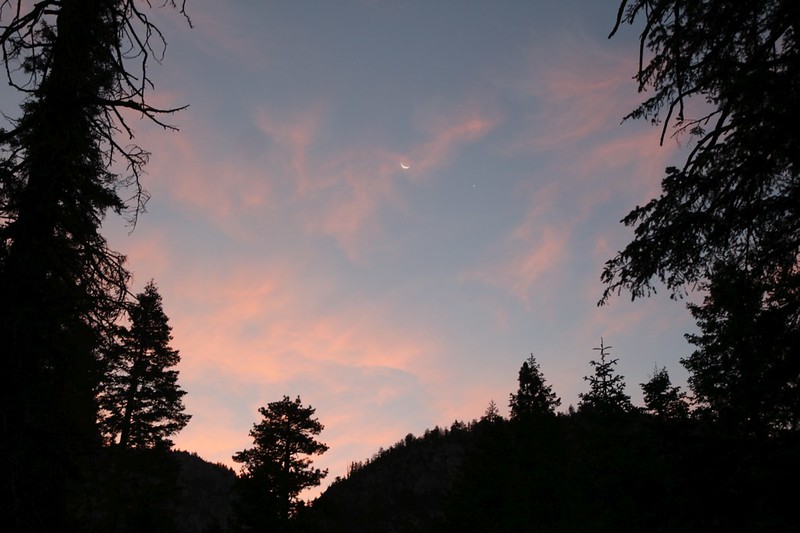 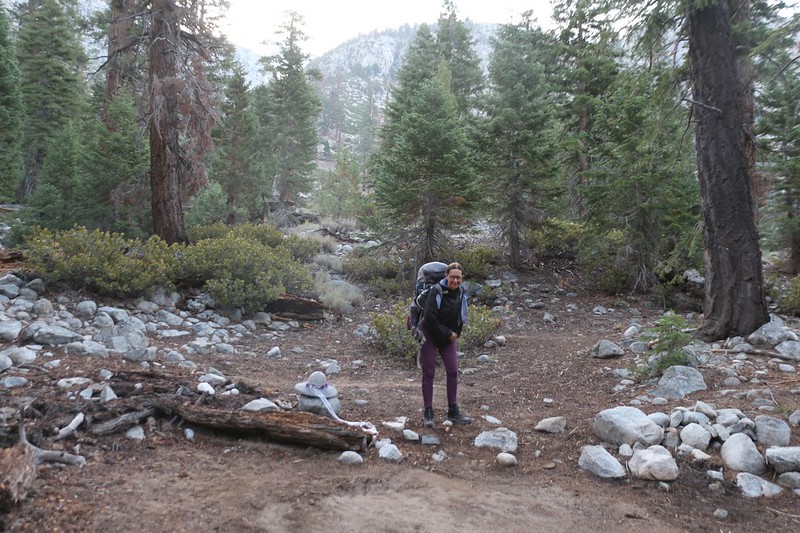 The first three miles of trail went quickly.  It paralleled the river, sometimes up high and sometimes along the bank.  The high walls of the canyon were on either side, and we could see the sunlight gradually heading down the western wall.  North and south were the best views.  Slowly but surely we made it to what I called “The Narrows” where the rocky canyon walls came closer together, and we passed through to a wider, less trenchlike, canyon.  But we still had a long way to go. 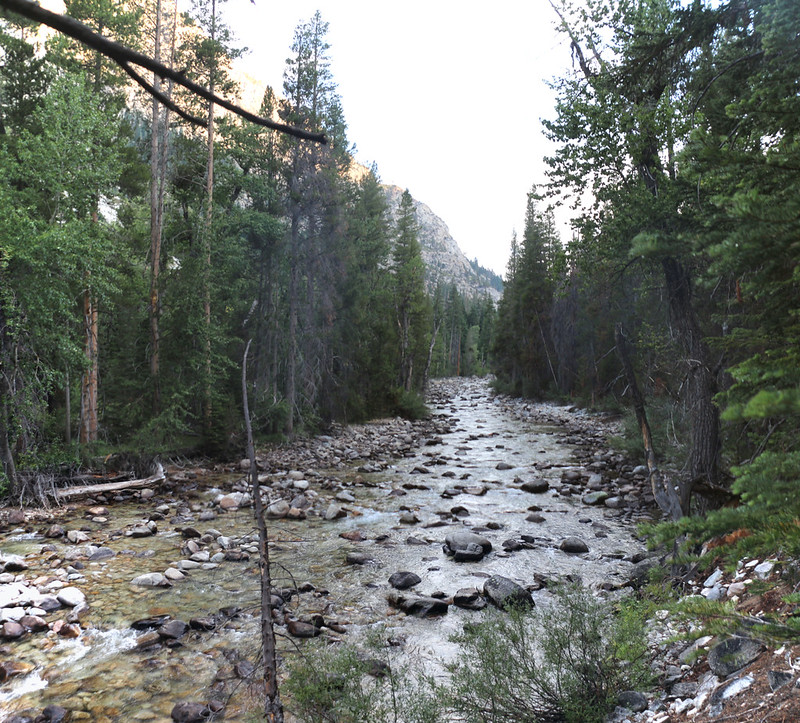 The Kern River in Kern Canyon during August 2020 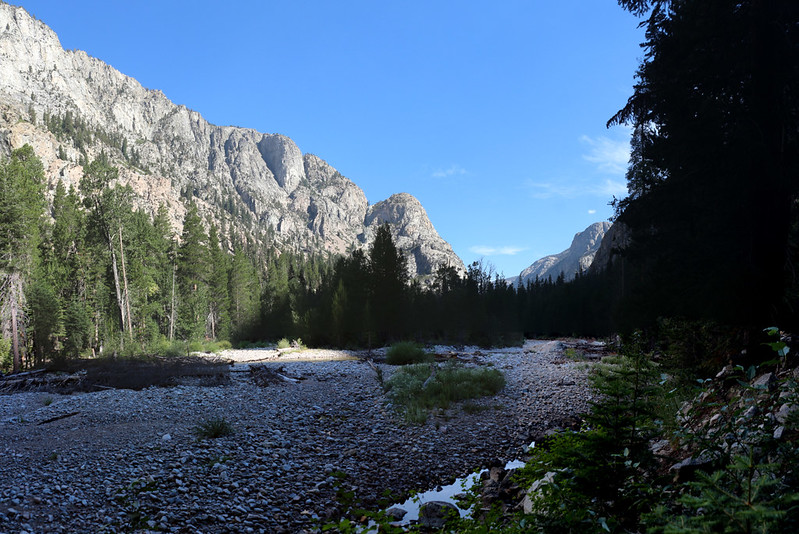 Looking north up Kern Canyon toward the Narrows 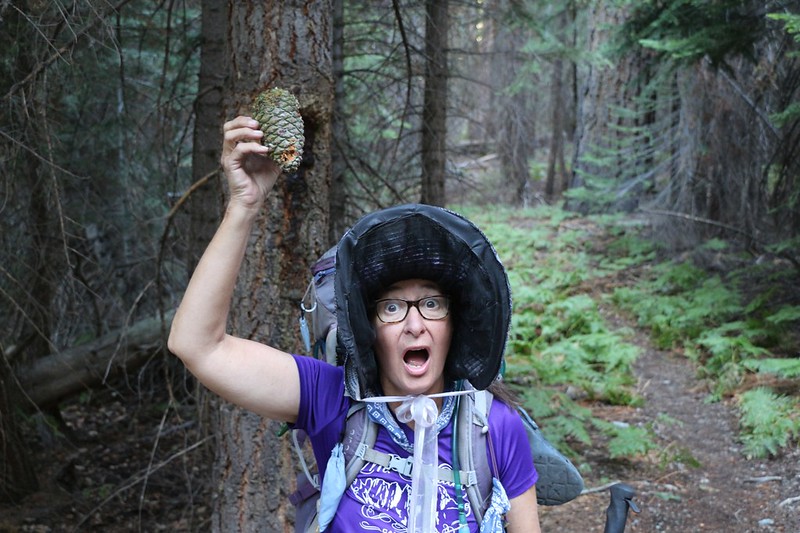 A large unripe pine cone was dropped 100 feet by a squirrel and almost hit us – we suspect foul play, and bad aim

Well, we got a good start, and we cranked out a number of miles, but the sun eventually arrived by 10am, and then it really started to get warmer.  Luckily, there were plenty of tall pines casting shade, but there were also sections that were totally exposed.  Vicki got out her water sprayer and kept herself wet and cool, and we made good progress.

Kern Canyon got wider as we continued hiking south 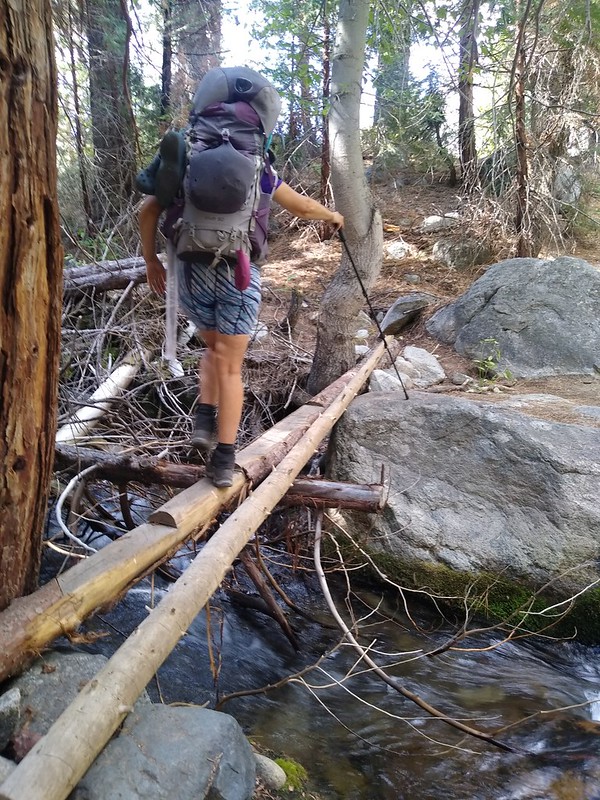 After Rock Creek, we knew that we were almost at our first destination:  Kern Hot Springs.  This spot is rightfully considered to be one of the highlights of the High Sierra Trail, and we fully intended to enjoy it.  First we passed through the campground, which was quite large and well-shaded by pines, and soon we arrived at the open area near the river where the hot springs were located.  We put down our packs for a long break, and we deserved it!

The campground just north of Kern Hot Springs, but we weren’t planning to camp there 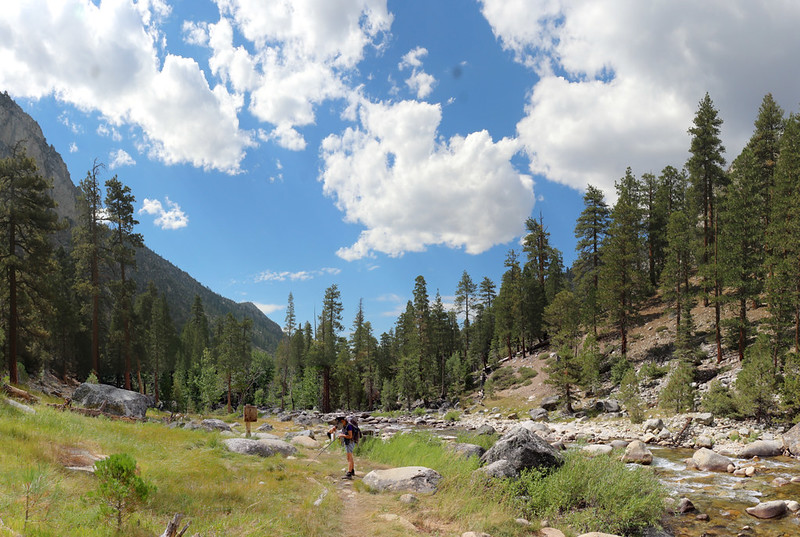 We arrived at Kern Hot Springs on the Kern River in Kern Canyon. Time for a long break! 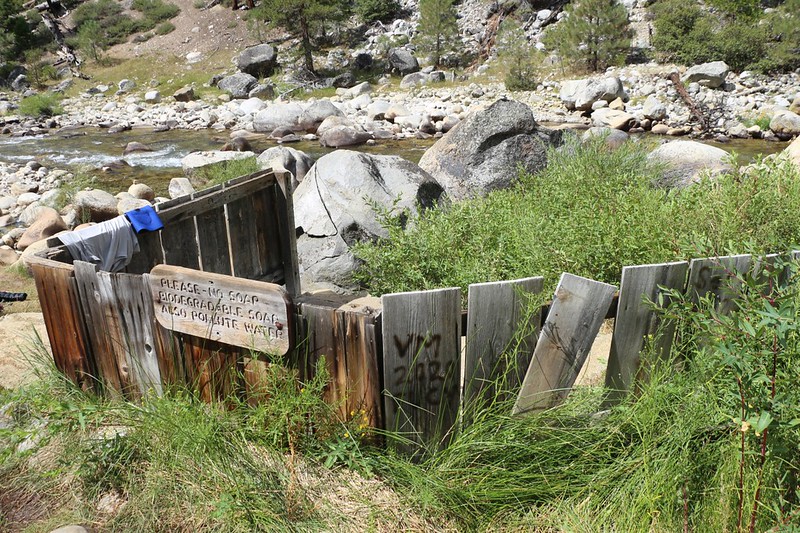 It was very hot in the sun, but we didn’t care.  Except that the spring’s water was even hotter!  There were three other gentlemen visiting at the same time that we were, and we all had fun.  The Kern River was right there, and it was mighty cold, and there was the cement hot tub itself, and it was mighty hot, but between the two was a rocky basin on the riverside that was at a perfectly warm temperature.  Ahh!  That was the place for us!  We took turns soaking in the glorious water, which was improved by the thought that we hadn’t had a bath in a week!  We didn’t use soap, of course, as it would have polluted the river, but we still removed a bit of the stink from our bodies.  Glorious! 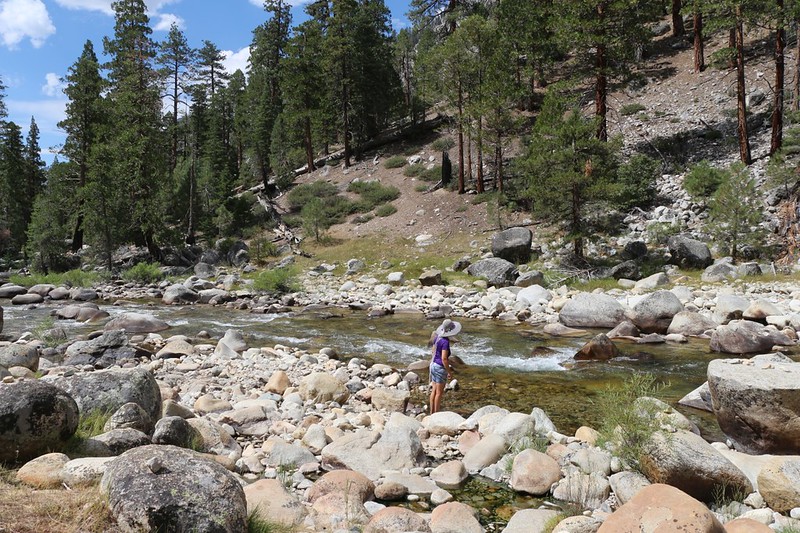 Vicki cooling off her feet in the Kern River. That water was cold!

Video of the Kern River at Kern Hot Springs 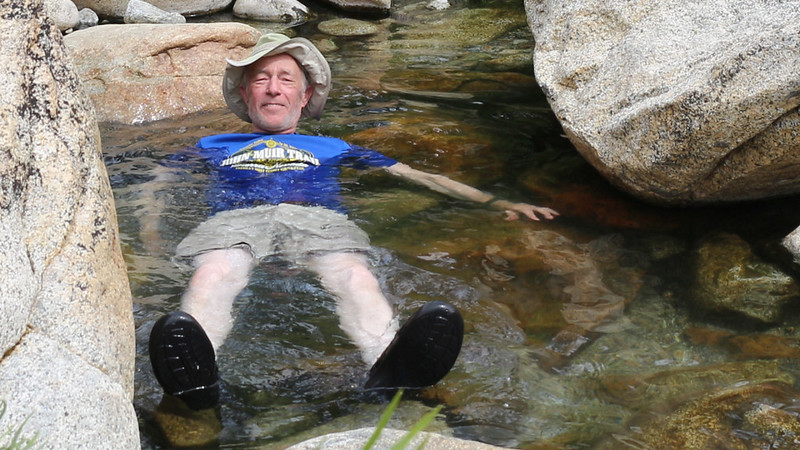 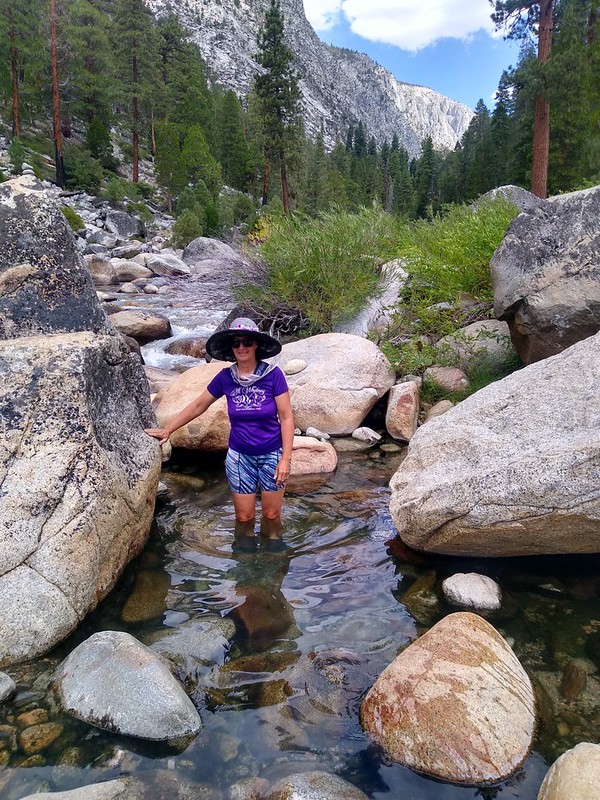 Vicki in the warm rocky pool

We sat down on a big boulder and dried off in the sun.  We ate our lunch as we waited for a turn at the cement tub.  It was very hot, but by inserting our legs slowly we were able to get used to it easily enough, just like any hot tub.  The tub’s temperature was adjusted by removing/inserting a one-inch diameter wooden peg from the inlet pipe, which allowed the truly scalding water to trickle into the tub.  I was pleased to note that there was no sign of a sulfurous smell to the hot springs, unlike many others.  Someone had even left an old aluminum pot with a long handle, so you could dump hot water on your head.  But Vicki and I didn’t try this.  We simply checked out the heat on our feet and legs, and decided that we were already hot enough in the sunshine. 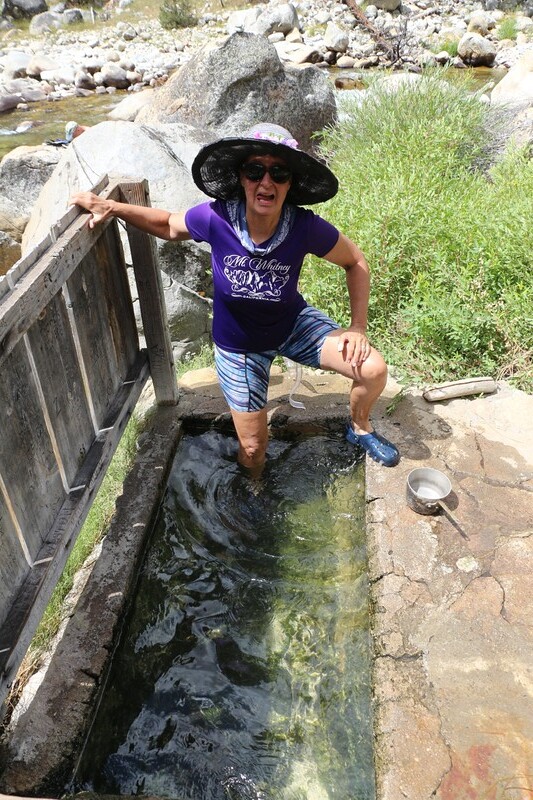 Vicki testing the HOT water in the cement bathtub 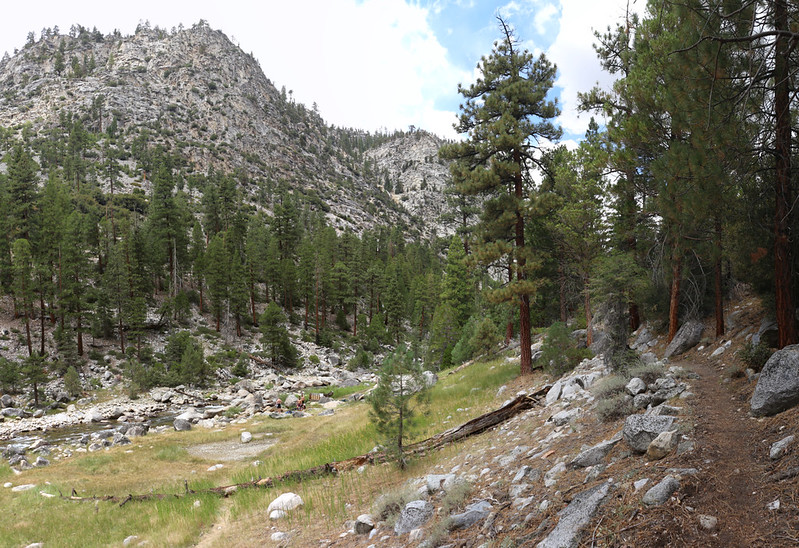 Lunch was over, and we had to take our leave of the springs – it was a great place to visit

So we put on our packs and headed onward down the canyon, toasting in the noonday sun.  We crossed a creek and Vicki cooled herself off, but there weren’t a lot of creeks and soon she was hot again.  We stopped in the shade when we could, but there wasn’t enough of it at that hour, as the sun was directly overhead.  Luckily for us, the cumulus clouds had been building in size and frequency as the day progressed, and soon enough were were hiking in shade more often than not.  Now if only we could get to camp before they grew into thunderheads! 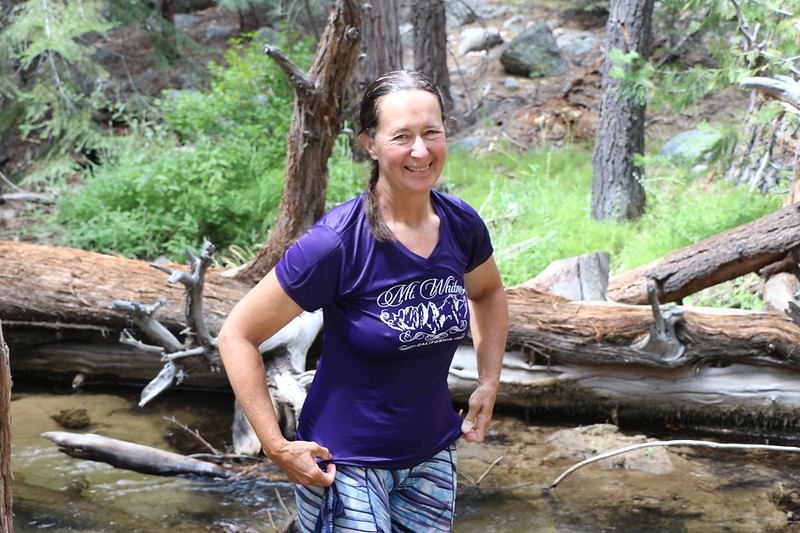 It was still roasting hot, so Vicki soaked her shirt in icy water from a small stream that we crossed 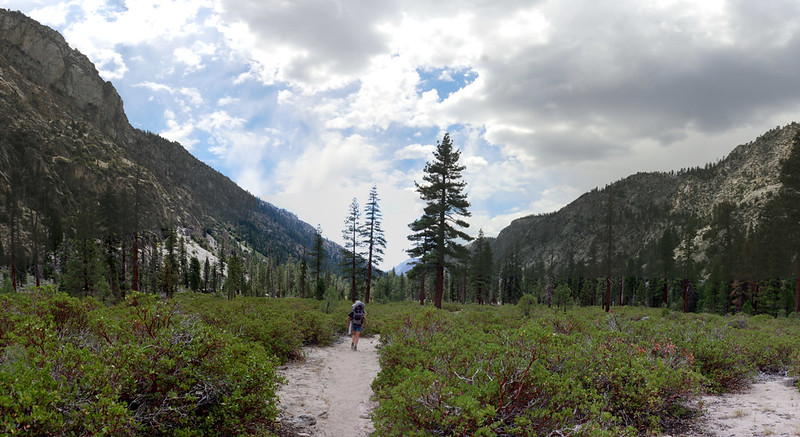 Hiking down Kern Canyon, as we headed toward Funston Meadow

Eventually, the trail headed west across the canyon floor, and we came to the wooden bridge over the Kern River.  I checked my GPS maps, and this bridge was NOT in the same location as the one on the map.  Hmmm… Somebody must’ve re-routed the trail recently, or else this was the old bridge and the newer one had been washed out.  Because this bridge certainly wasn’t new by any means.  Still, we were obviously on the main trail, and we continued hiking. 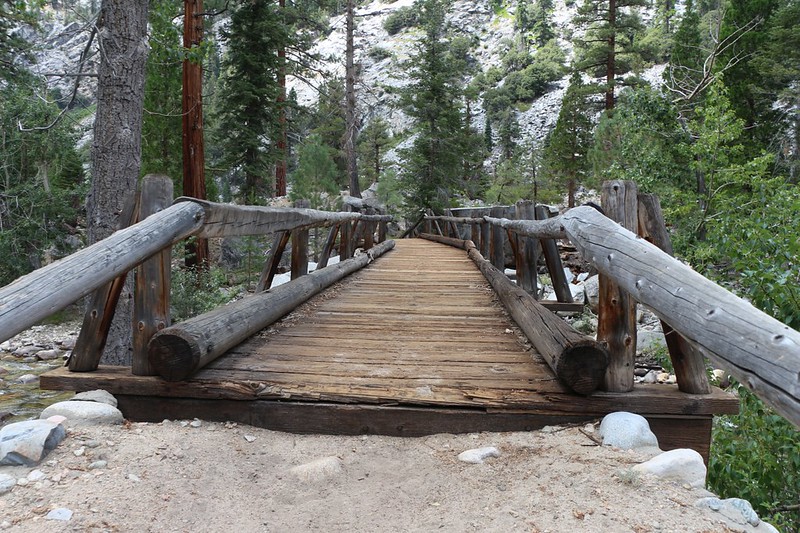 The wooden bridge where the trail crosses the Kern River

Video of the Kern River flowing past the wooden bridge 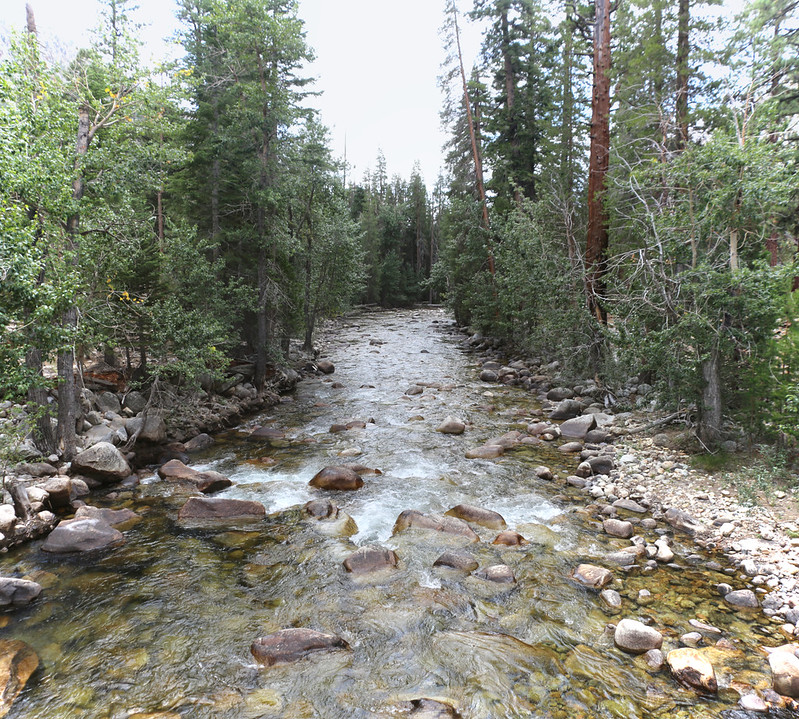 Looking south, downstream over the river from the bridge

By this point, we only had another mile and a half to hike, but it suddenly became much more of a chore.  Our energy had been sapped by the heat, and we didn’t use our brains, which would have told us to stop for a rest.  So we trudged onward.  If we had rested we might have enjoyed this area, but no.  It seemed endless.  The only real joy was watching Chagoopa Falls tumbling down into the canyon from the west.  When I mentioned to Vicki that we would be hiking way up there tomorrow morning, she only groaned.  Tomorrow was going to be the biggest climbing day of the entire trip, and she wasn’t looking forward to it.  At all. 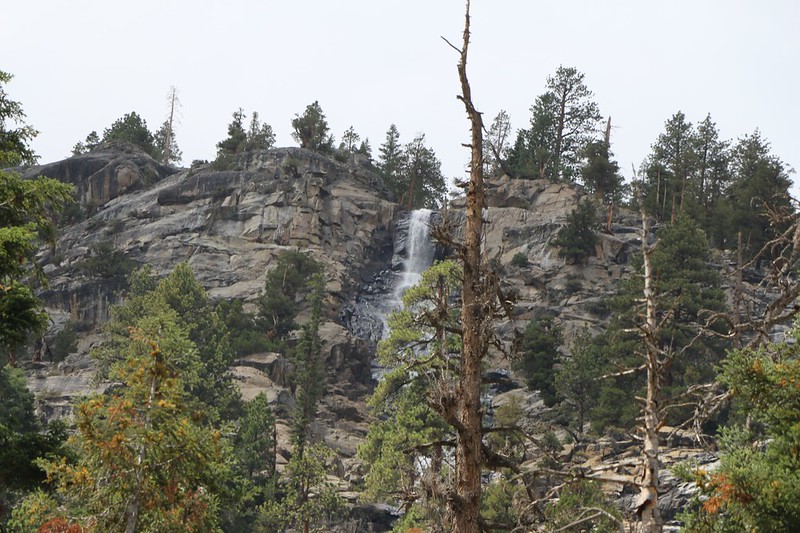 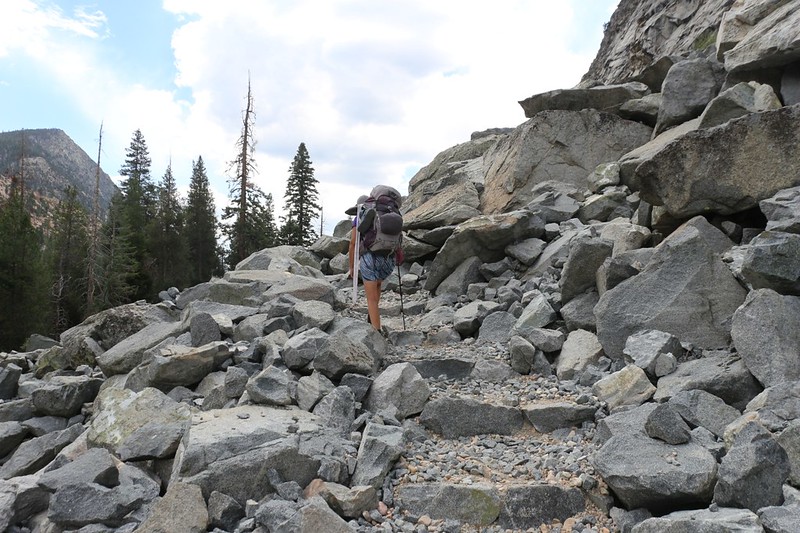 This newer part of the trail was built through a slide of talus, and was annoying to walk on due to the rocks

Eventually, of course, we made it to the trail intersection near Funston Meadow.  What a relief!  I pointed out tomorrow’s uphill trail to Vicki, and then we completely ignored it.  We continued a bit further down Kern Canyon until we found the side trail to the meadow.  There were campsites down there that were mainly used by the horse packers, but we didn’t care.  It seemed that the hikers usually stayed in the camp by the Hot Springs, but we wanted to get a jump on tomorrow’s hike so here we were, two miles from the springs. 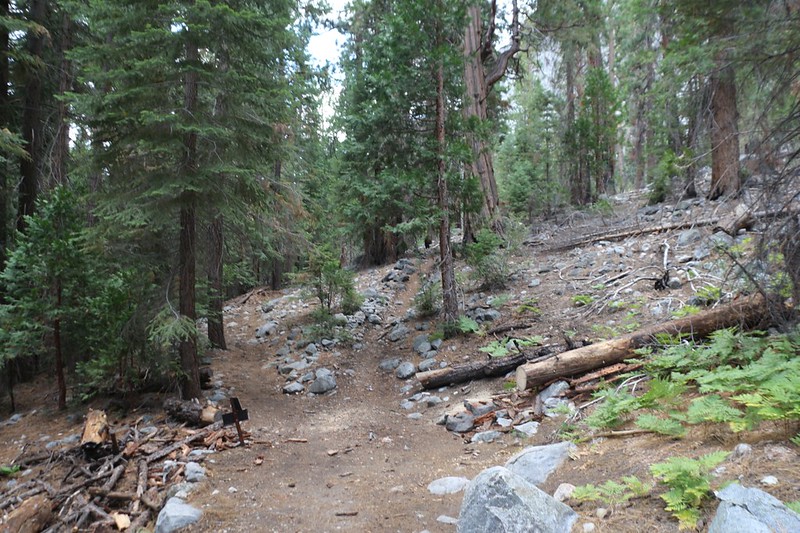 Luckily for us, 2020 was a weird year, and there were almost no horses out in the backcountry.  As such, we had the campground to ourselves.  This made us happy.  Vicki was super-exhausted, so we got the tent set up right away, and then she took a quick nap inside, while I purified two gallons of water from the river.  She didn’t sleep long, as she really wanted to get some laundry done.  We try to do it every three days, and this was day six.  Plus we just had a bath!  The sun hadn’t gone down behind the canyon wall so this was the perfect time.  Vicki washed, and I wrung out the clothes, and soon they were all hanging on the line. 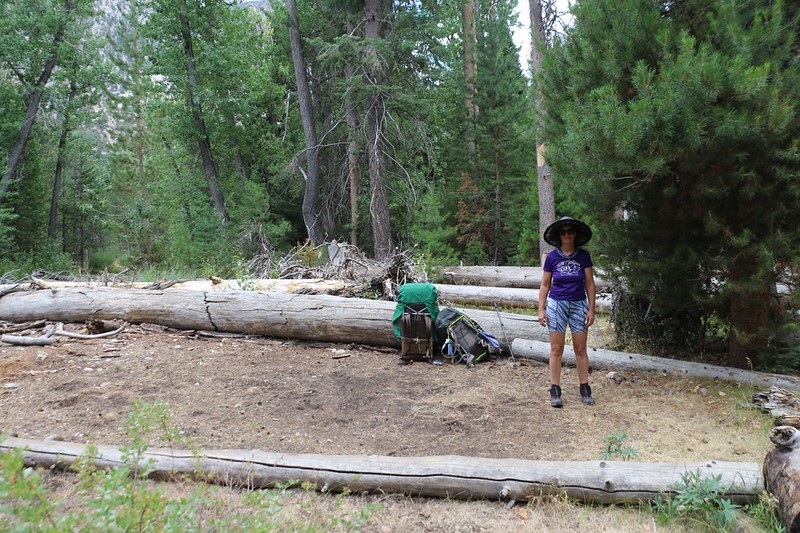 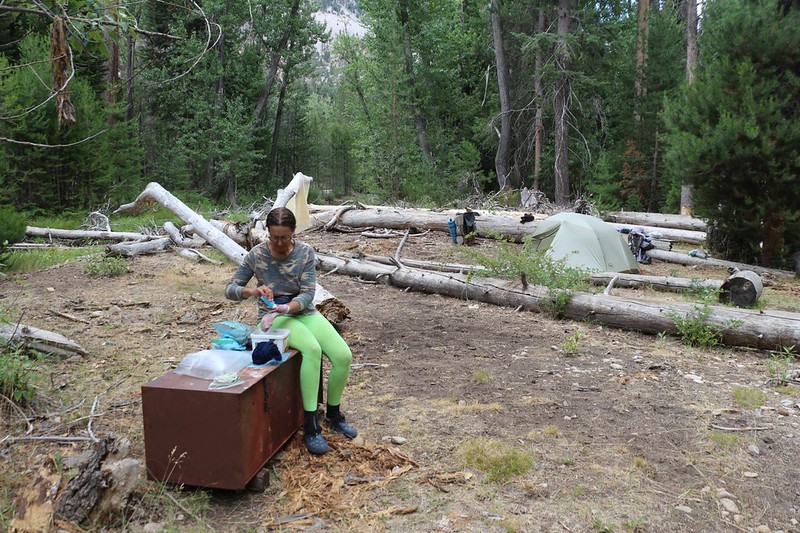 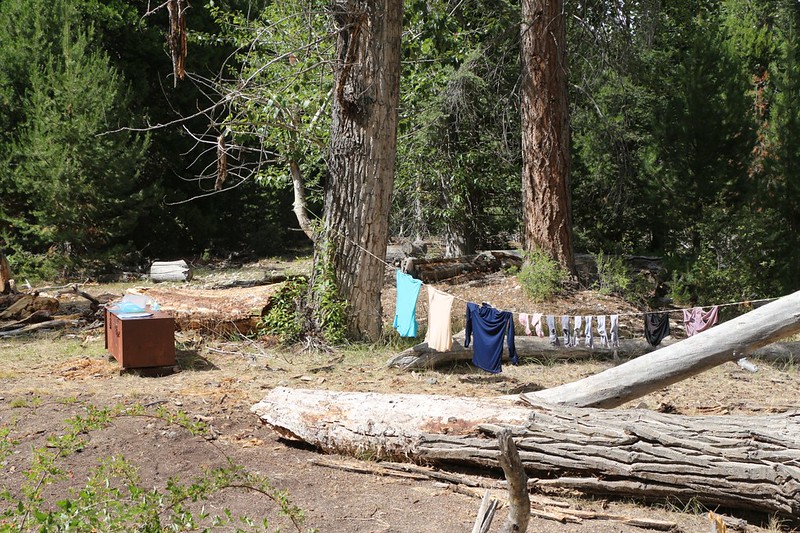 We lay around in the tent and read our books, and generally took it easy.  I mentioned to Vicki that, mileage-wise, the Kern Hot Springs had been the the mid-point of our 70 mile trek, and today was the middle day.  We were happy to be carrying less food, but sad that the trip would be ending all too soon.  Oh well.  That’s life.

Meanwhile, there was a decent breeze blowing outside, and soon enough our clothing was almost dry.  And then we heard the sound of thunder.  Loud thunder, the sound rolling and echoing off the sides of the canyon.  We sat up and stuck our heads outside of the tent.  There was a dark, ominous cloud directly above us.  We looked at each other.  The laundry would have to be dry enough now!  We ran outside and started collecting all of our belongings, and stashed them inside the tent or under the tarp within the shelter of the vestibules.  Our packs, too.  The flashes of lightning and the boomings of thunder were a real stimulus!  And then the rain started pattering down, small drops at first, but we knew what was coming.  You could smell it in the air, and then the wind picked up, gusting erratically through the grass and in the trees.  We dove for the tent and zipped up the doors.  We made it!

And then it started raining in earnest.  It lasted for almost a half hour, and the air got quite cool when the hail began to fall.  There was plenty of lightning and thunder.  And, we have to admit, it was quite a bit of fun to sit inside our snug little tent while the world outside was getting drenched.  It was the first real test of this new tent, a Big Agnes Copper Spur UL2, and it came through it with flying colors! 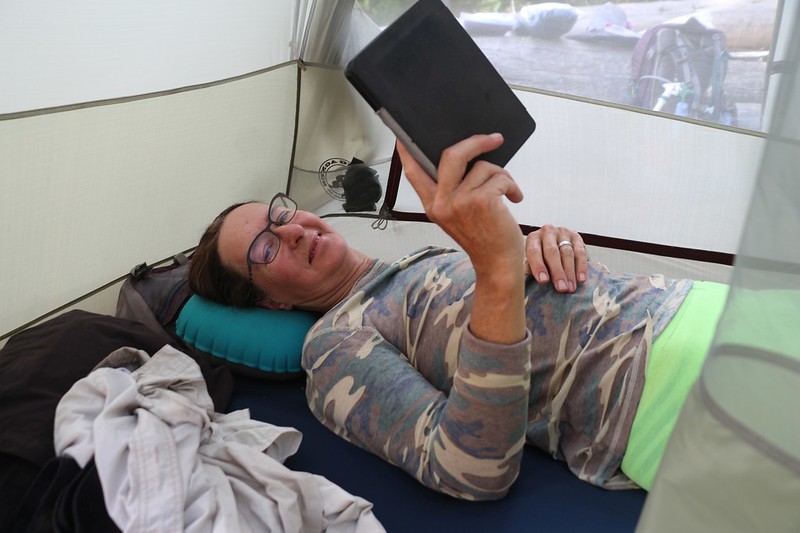 Vicki taking an afternoon rest in our tent. Until it started raining…

LONG GoPro video of a hailstorm from inside our tent, with plenty of thunder and lightning 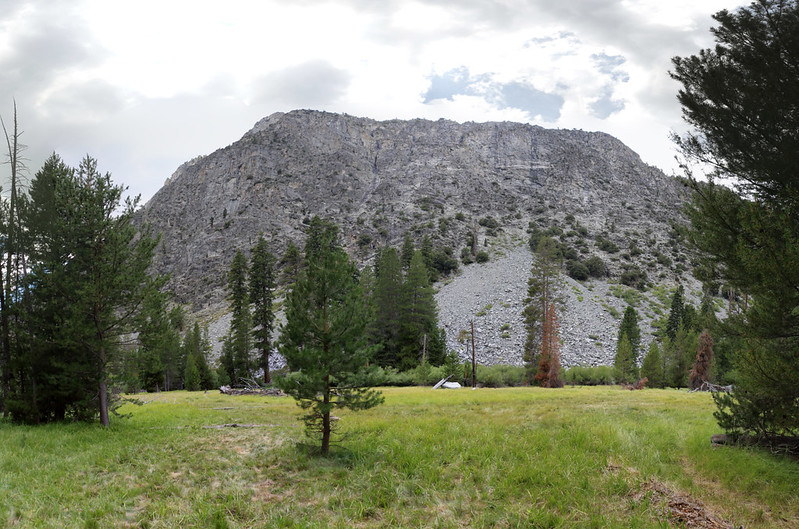 Upper Funston Meadow as the thunder clouds broke up

After that, we knew that the sun was already below the canyon walls, so we got dressed in warmer clothes and went outside to eat dinner.  Afterward, we took a walk over to the meadow and checked it out.  Very peaceful, and it was still green, even in August.

Then we headed to bed early.  We set the alarm for 3am, as tomorrow was going to be the toughest day of all, when we had to climb over 2500 feet out of the Kern Trench, and hike about six miles.  It was going to be a very long day.