We officially started hiking on the High Sierra Trail, from east to west, from Wallace Creek and the John Muir Trail, continuing west down into Kern Canyon, getting great views the entire way, eventually setting up camp at Whitney Creek, two miles south of Junction Meadow. 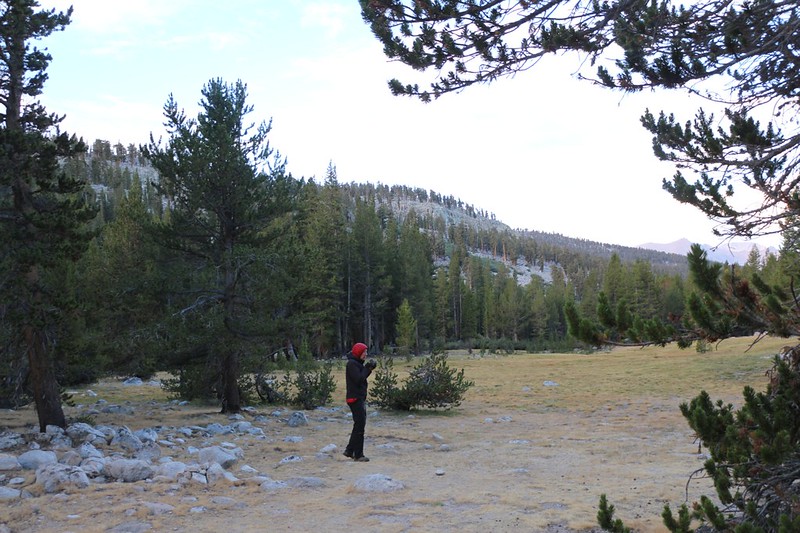 Me, drinking my morning coffee in the chill dawn air of the Wallace Creek campsite on the PCT-JMT-HST

We woke at first light and began getting ready.  We ate a normal freeze-dried breakfast and drank our coffee.  There was no big rush as today was all downhill, 2600 feet, heading deep into the “Kern Trench.”  Vicki was truly looking forward to it.  We decided not to speak about the subsequent climb two days later to get out of the trench, but it was always in the back of our minds.  We’d climb that hill when we came to it. 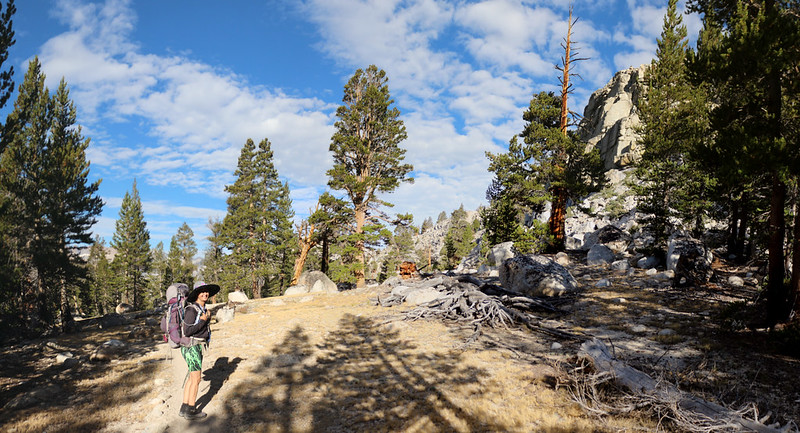 Vicki getting ready to hike down Wallace Creek on the High Sierra Trail – we started late, at 8am

It was a beautiful day, the sky replete with puffy clouds, which meant that there would be opportunities for truly great photos.  The weather report via satellite from my InReach mentioned thunderstorm chances for the next few days, and the clouds that were already forming so early in the morning made it seem likely.  Still, we would be heading west, away from the Sierra Crest, so I thought that we might escape the worst of the storms later that afternoon.  Meanwhile, the weather was great, and we started off down the trail, which paralleled Wallace Creek most of the way down into the canyon.  Luckily for us, it stayed high on the northern slope, and we were treated to spectacular views the entire way. 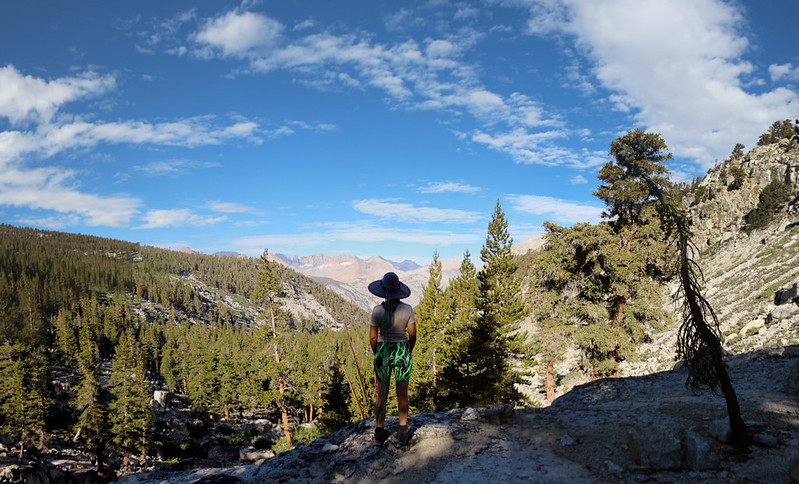 Video of Wallace Creek as it cascaded down into Kern Canyon 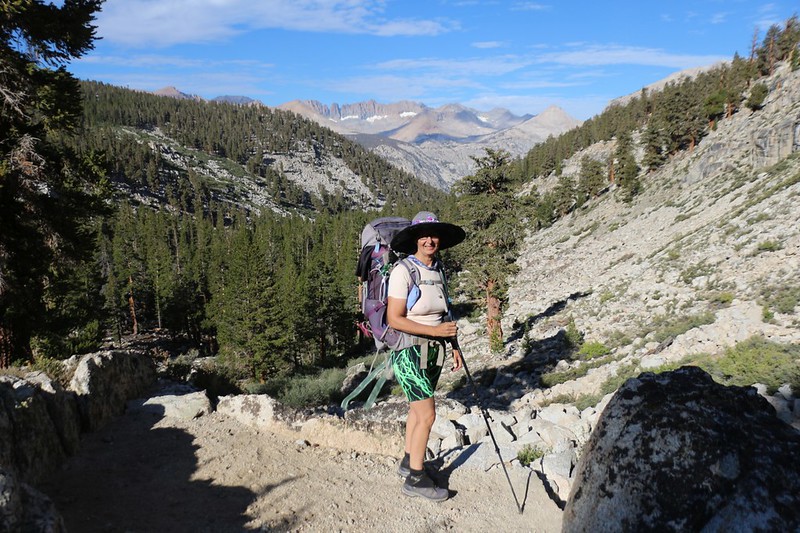 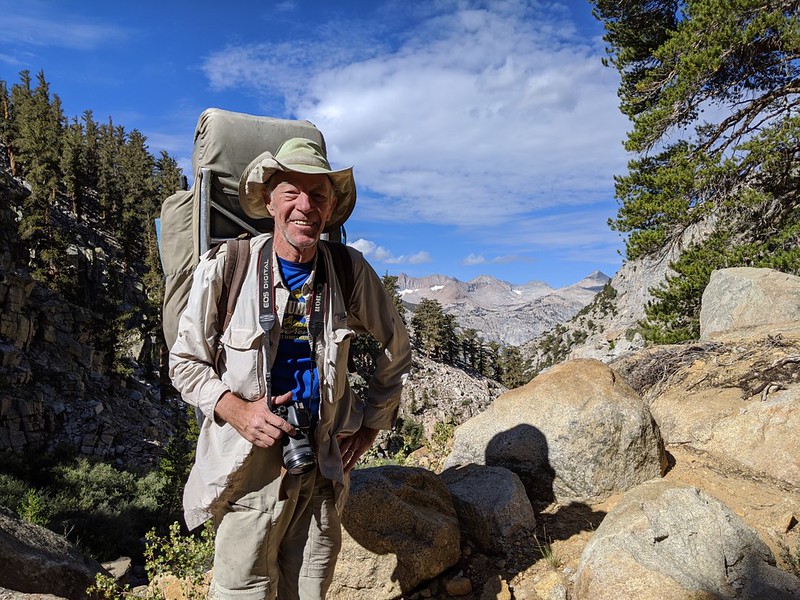 Me, posing on the HST as we headed downhill into Kern Canyon 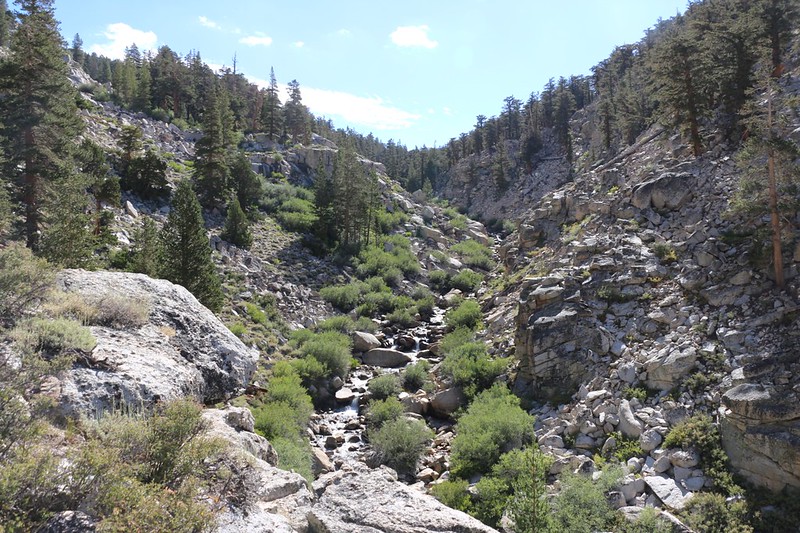 Looking back east up the canyon as Wallace Creek cascaded down 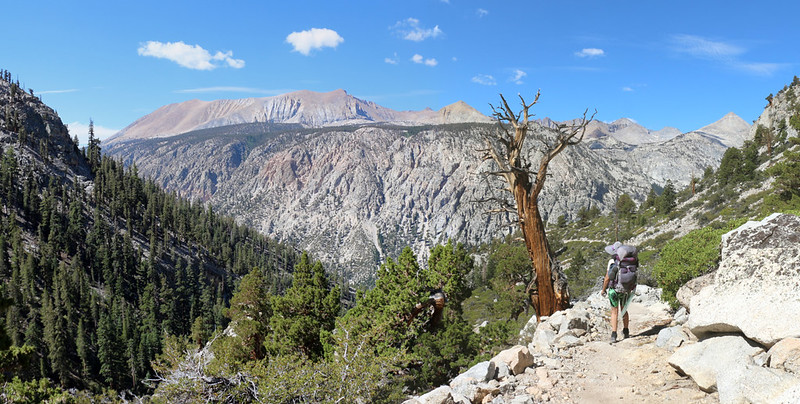 After two miles, the creek dropped down steeply while the trail stayed up high, descending gradually, eventually turning north along the side of Kern Canyon.  We were then able to look both north and south, from a superb vantage point.  The Kaweah Range to the west vanished from view as we got lower, until only the high walls of the canyon remained visible. 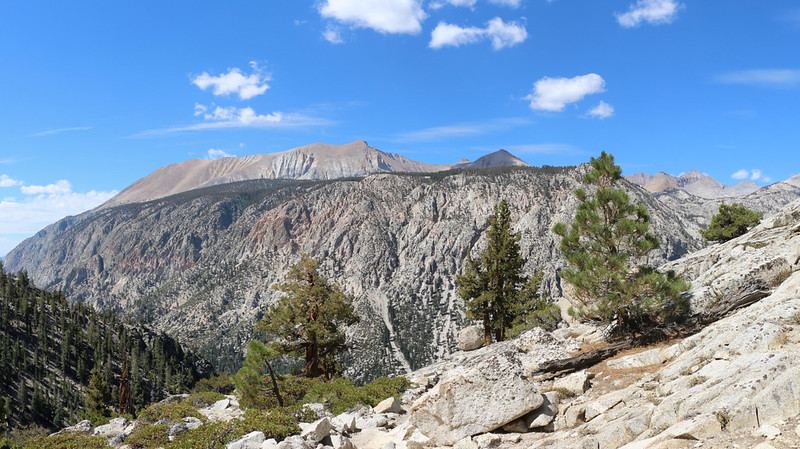 Looking across Kern Canyon – it’s a long way down 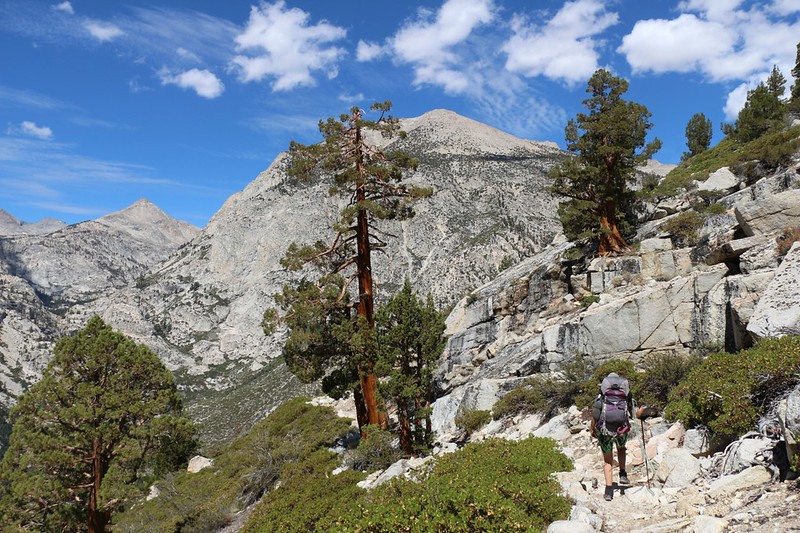 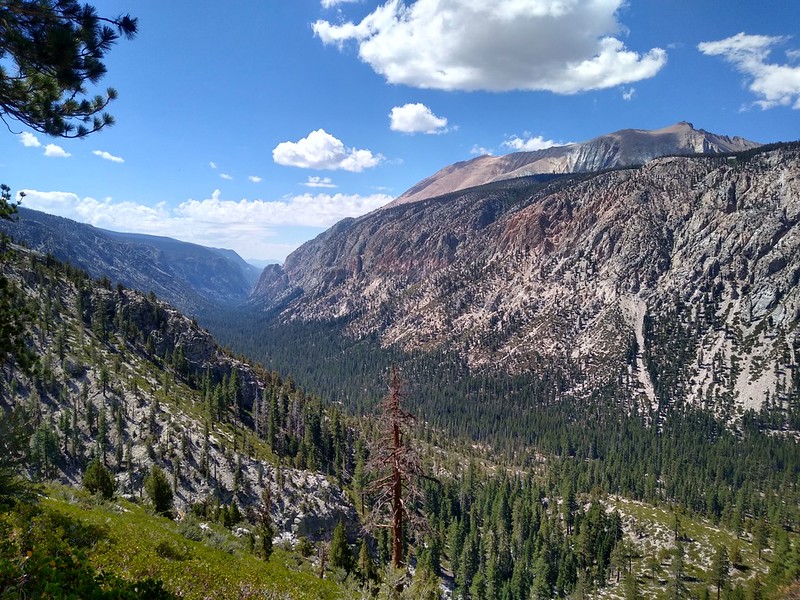 We reached the trail junction, just above the Kern River, and turned north (the wrong way) as there were some tall pines up that way.  We wanted to take a break and have some lunch in the shade.  And we found a really nice spot to camp next to the river.  We took off our shoes and relaxed for a while.  It was mellow.  But there was no doubt that the temperature was higher down there in the canyon, 2500 feet lower than yesterday.  So much for the comfortable High Sierra weather that we’d been getting used to! 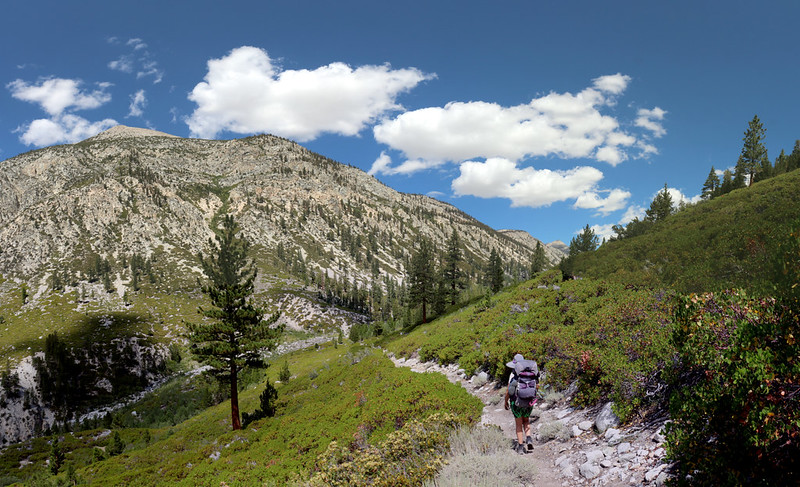 The High Sierra Trail headed down into Kern Canyon, with the Upper Kern River on the right 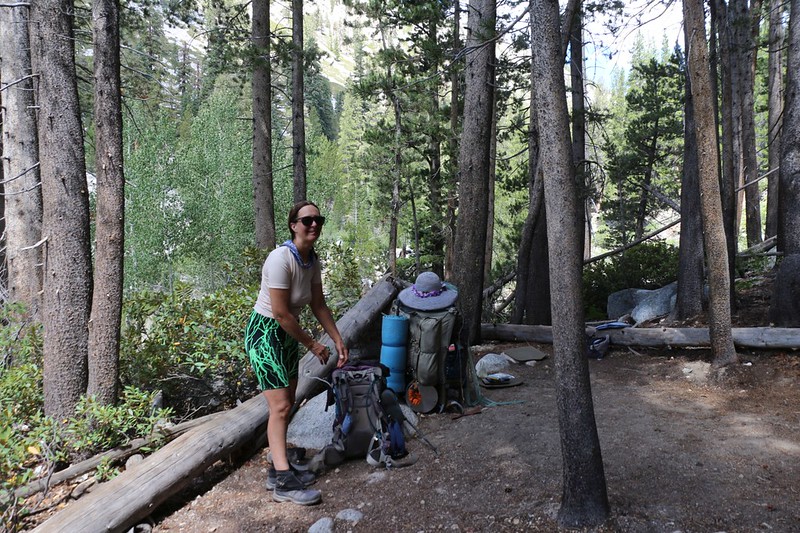 Eventually, we had no choice but to face the heat, so we hiked south, deeper into the canyon.  We reached Junction Meadow in the early afternoon.  It was a large camp, under tall pines, and there were several groups already there.  Our original plan was to camp at Junction Meadow, but Vicki was feeling strong, and she wanted to continue onward a bit further.  We had over ten miles to hike the next day, so shaving a couple off by hiking further today made a lot of sense.  Onward! 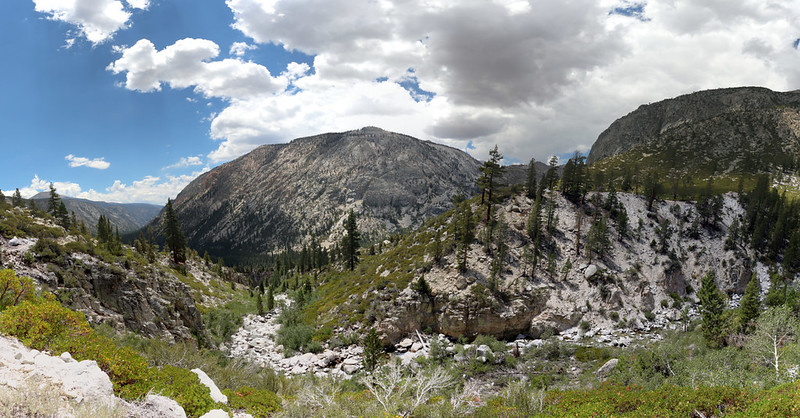 Panorama view southwest as we headed downhill toward Junction Meadow 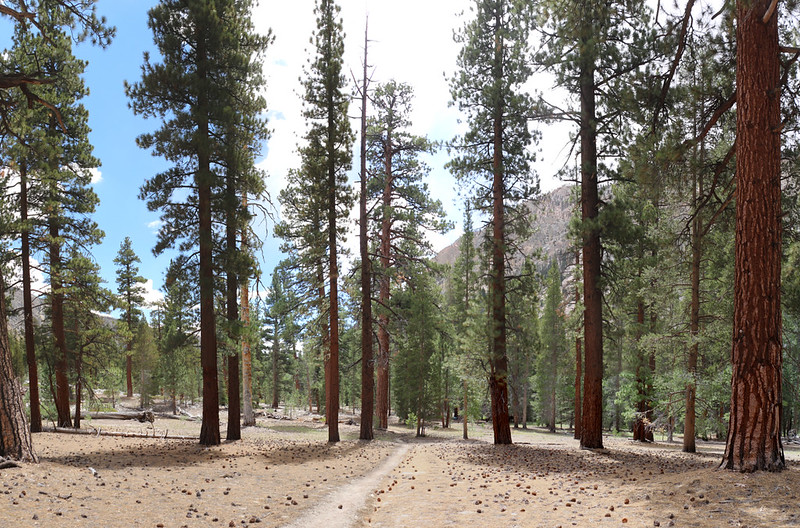 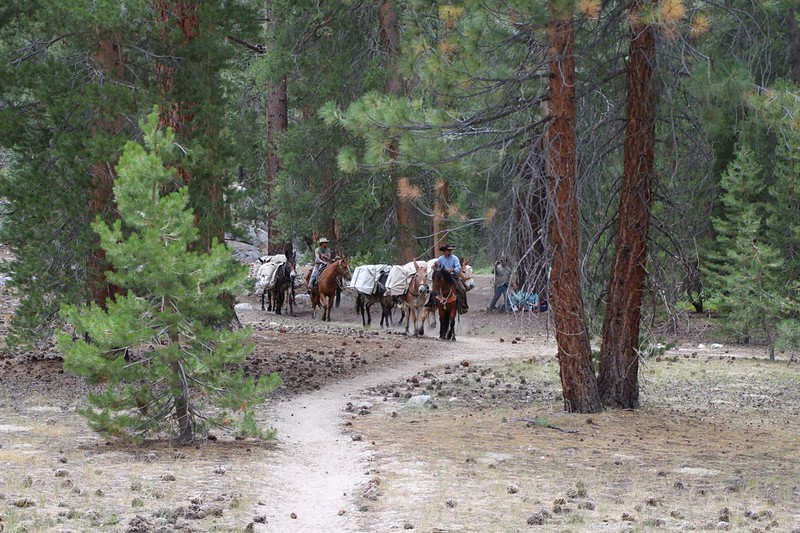 We continued downhill, although really the trail was quite flat.  We crossed Wallace Creek and finally needed to use our water shoes, as there were no convenient logs nearby.  We probably could have searched upstream to find a dry crossing but decided that cooling our feet in the icy water was exactly what the doctor ordered.  After that, the trail meandered along, occasionally getting close to the Kern River, which was quite low in August of 2020, a dry year.  We’d be crossing it tomorrow, on a wooden bridge, because it was normally too dangerous to attempt on foot. 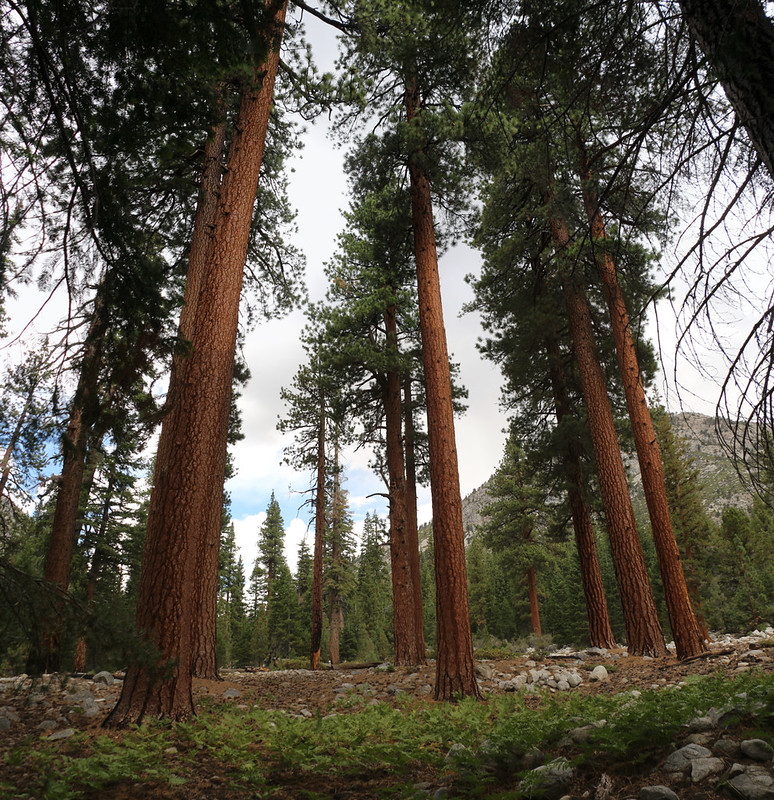 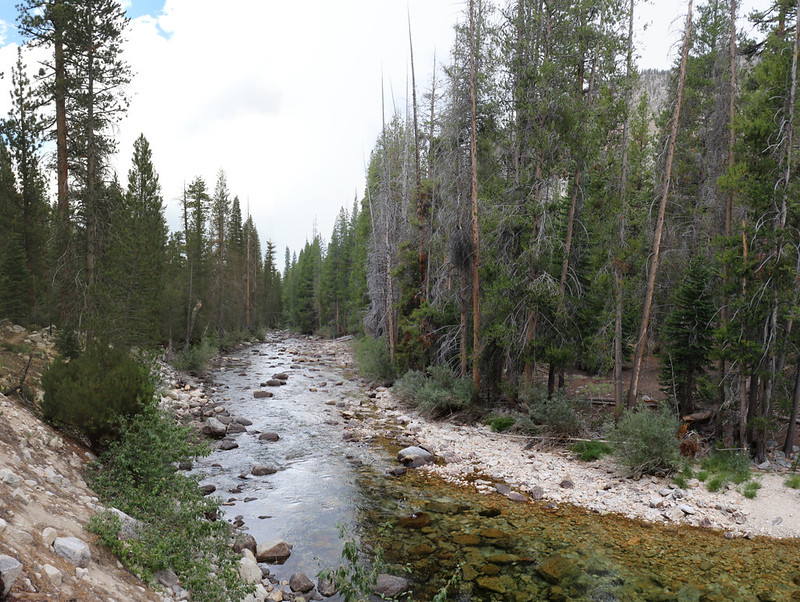 The Kern River was at a fairly low level this late in the year, but we didn’t have to ford it, either

The clouds had been gradually increasing overhead all day, and it came as no surprise when a few small drops began to land on our hands, and make tapping sounds as they struck our hats and backpacks.  Oh boy!  We knew that you only get a few minute’s warning when a thunderstorm approaches, so we stopped and put on our pack covers.  We also got out the super-cheap plastic ponchos we’d packed, rather than our gore-tex rain gear.  Over the years, we’ve determined that the gore-tex stuff wasn’t anywhere near as waterproof as they claim (and as you’d expect given its high cost) after it got older.   We’d found out the hard way that it fully wetted-out and allowed water to wick through it, completely soaking both ourselves and our clothing.  Utterly Useless, in other words, except to keep the wind from freezing us to death.  Hence the cheap ponchos.  And they worked great!  Too bad the rain let up this time, before we could fully test them.  But that was OK by us, as wet shoes weren’t all that much fun either.  So I bunched up the poncho and stuffed it in my pocket, but left the pack cover on. 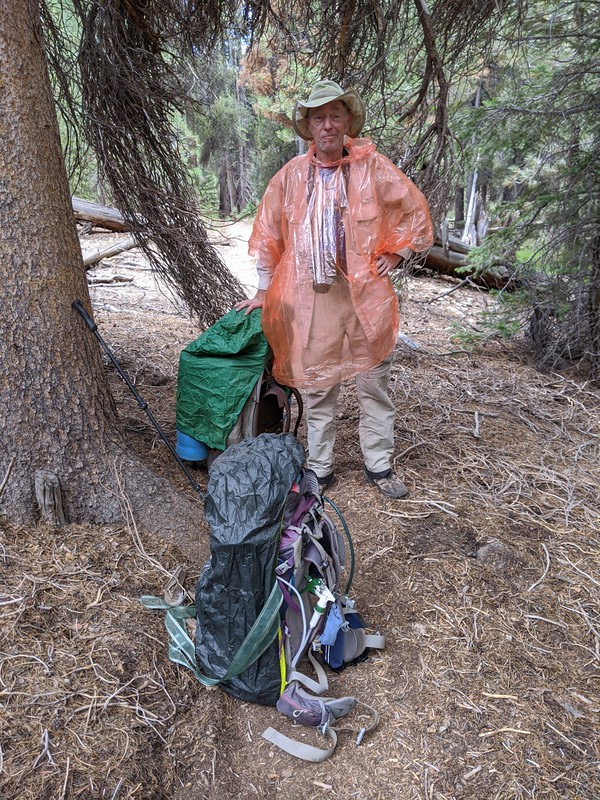 The clouds began to sprinkle, so we covered our packs and wore cheap ponchos to stay dry 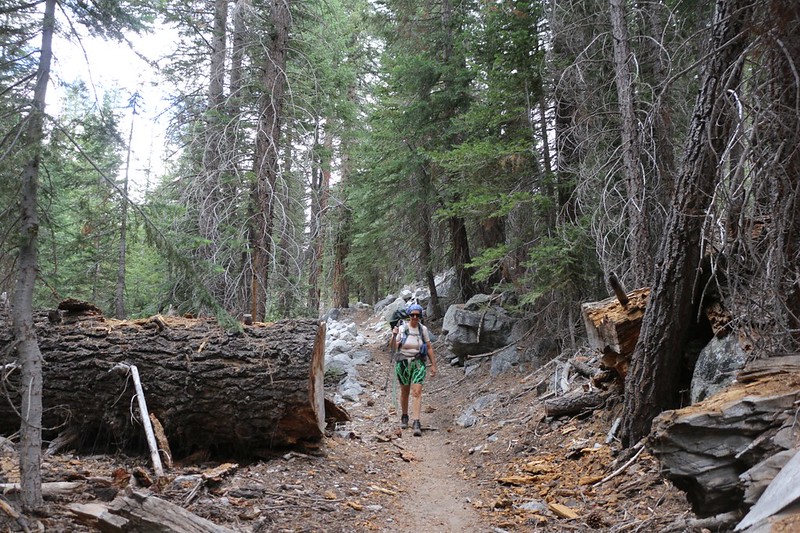 It was getting close to 4pm by the time we neared Whitney Creek.  It felt good to know we’d lopped two miles off tomorrow’s hike, but meanwhile where were we going to camp around here?  Everything looked bad, either too much slope or too rocky or too brushy.  So we took off our shoes and crossed Whitney Creek, then put them back on, but we didn’t put on our packs.  We needed a decent camping spot.  By the time I got my shoes on, Vicki had already found a likely spot.  Yes, it had some slope, but at least it was smooth.  It even had a bit of a view.  And others had camped there before, so the Leave No Trace guidelines were satisfied.  After we scuffed the dirt a bit, the slope was acceptable, and we began to get out the tent. 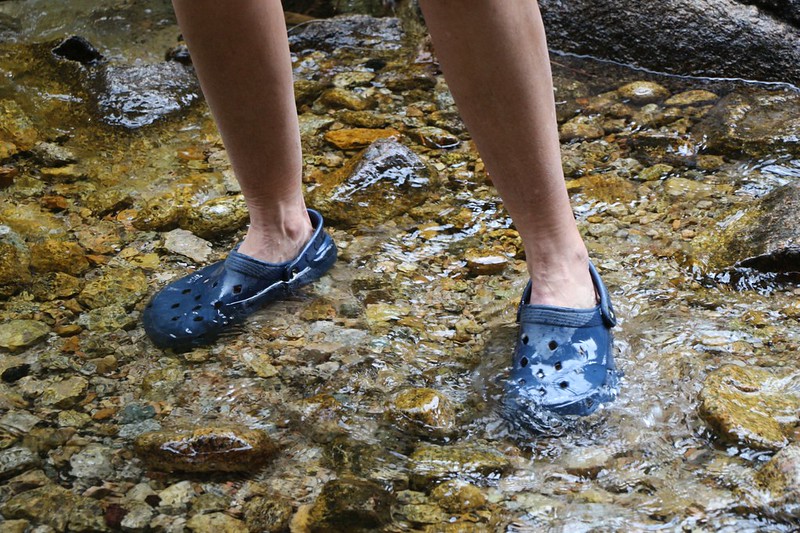 Vicki wearing her crocs in the waters of Whitney Creek, cooling her feet after a long day hiking 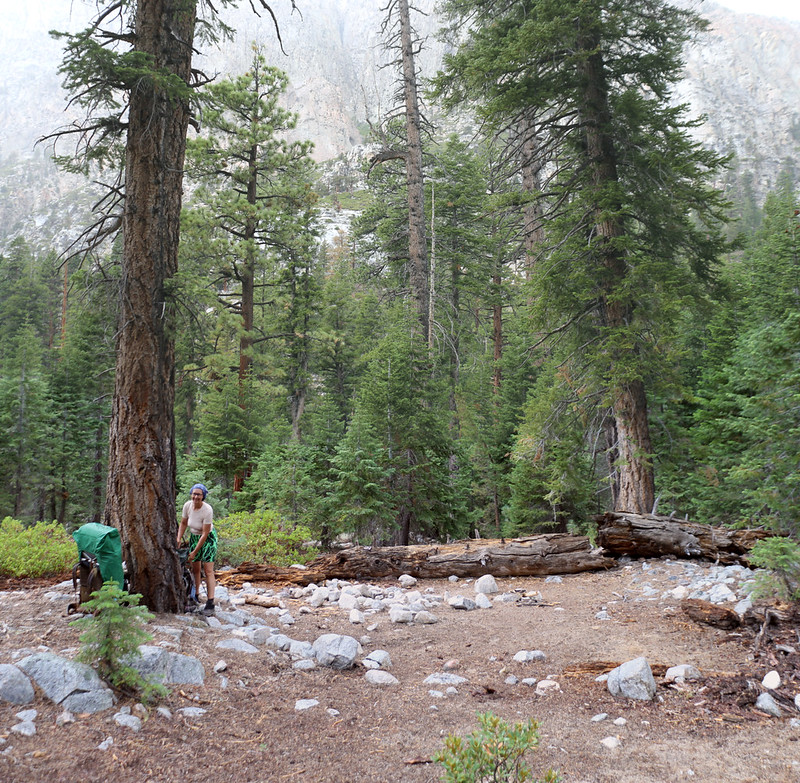 We found one small campsite south of Whitney Creek, just uphill from the High Sierra Trail

And that’s when it decided to rain again!  So we left the tent in its bag, re-covered the pack, and donned our ponchos once more.  And we were lucky.  The rain was light, it didn’t last too long, and the sun came out to visit.  Sun shower!  There were plenty of big clouds drifting overhead, and we knew that time might be short, so as soon as the rain stopped we whipped out the tent and got it all set up.  Then we were safe, and could take our time getting everything else ready. 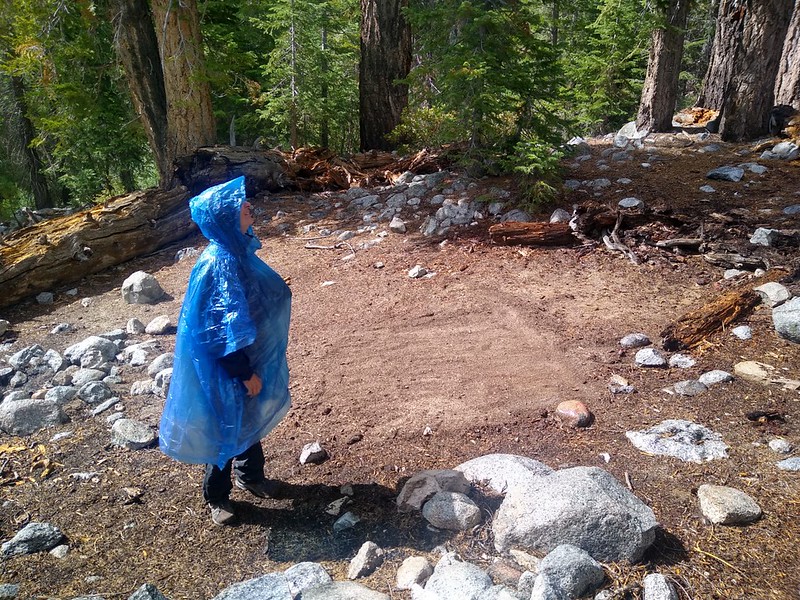 The rain didn’t last very long, so we got out the tent and set it up before it could rain again 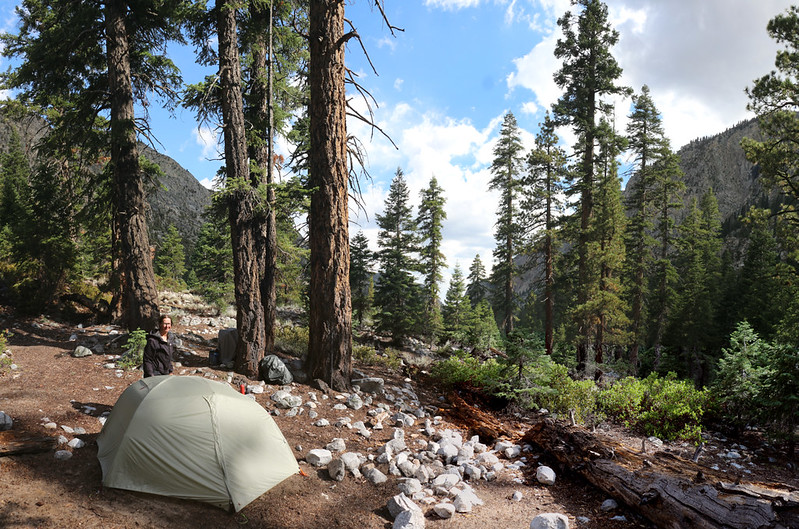 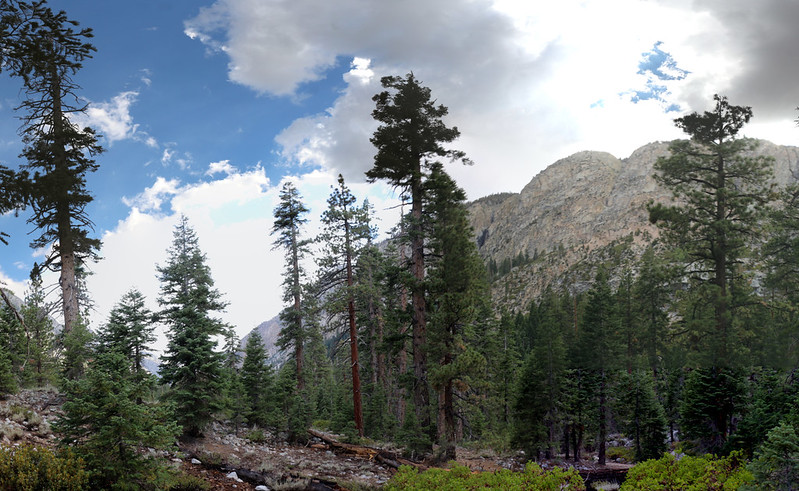 Once our camp was ready, we filtered some water from Whitney Creek.  We wondered if maybe some of the water that we saw flowing in Crabtree Meadow two days ago was flowing past us once again.  It was theoretically possible, at least.  And then we had some dinner and enjoyed our private little campsite down in Kern Canyon.  We were glad that we’d hiked on past Junction Meadow.  We got out the map and realized that we still had almost eight miles to hike tomorrow, most of it downhill, albeit on the relatively flat canyon bottom, and down at this elevation, we knew that it was going to be really hot.  We decided to get up early the next day, to start hiking before dawn, so we could get as far as possible before the sun made its way deep into the canyon.

All in all, it had been a really great day of hiking.  It was all downhill, and we had awesome views the entire way down Wallace Creek.  We even got to enjoy a few sprinkles of afternoon rain without the unpleasantness of getting drenched.  Life was good.