We hiked on the Pacific Crest Trail from lower Crabtree Meadow to the junction with the High Sierra Trail at Wallace Creek, and most of the hike was also on the John Muir Trail, which joins the PCT just up the hill from the meadow.  It was only a four mile journey, with less than a thousand feet of elevation gain, and it was planned to be the easiest day of the entire eleven day trek.  Actually, my original plan was for a ten day hike and a much longer fourth day, but Vicki insisted that we break it into two parts.  I didn’t argue very hard.  Spending an extra day in the Sierra?  What a shame!  Go ahead, twist my arm and make me do it! 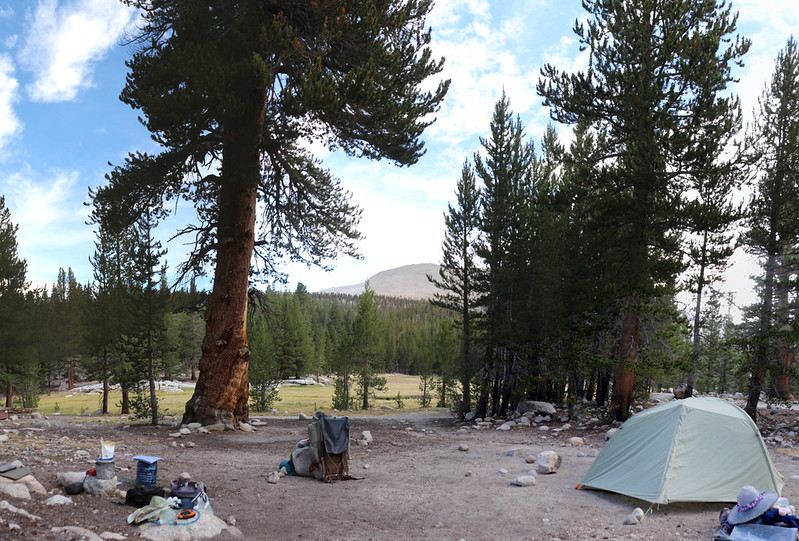 We hung around inside the tent, under the goose down quilt, and eventually crawled out to have breakfast.  We took the food and our cups of coffee down the trail to a nice spot where we could watch the meadow and check out Mount Whitney.  Why can’t every day begin like this? 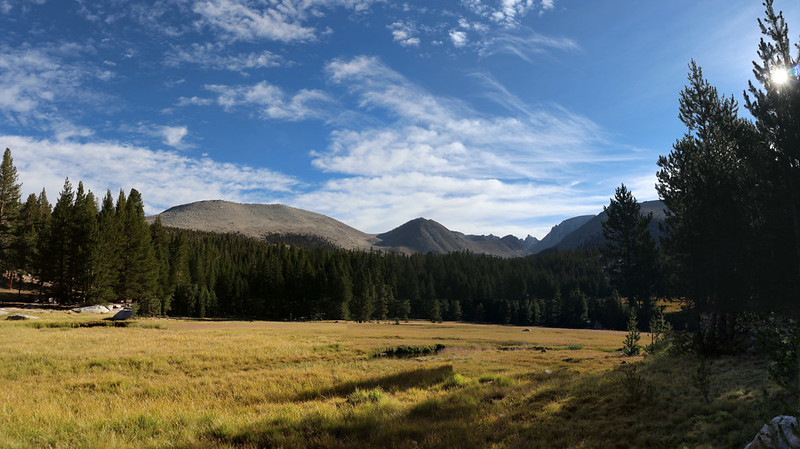 Morning light on Crabtree Meadow from the PCT, with Mount Whitney the rounded peak right of center

Of course, we had to pack up sometime, and so we did.  We ended up leaving camp about 8:30am, which was the latest we’d started in a long, long time.  Whitney Creek wasn’t flowing very fast, and it was easy to cross on the conveniently placed boulders.  Then the trail headed upwards, until it intersected and joined with the John Muir Trail, which headed northbound to Yosemite National Park.  The PCT and JMT largely had identical paths through the Sierra, which made many folks call it the “Sierra Superhighway.”  And this next short section also included the High Sierra Trail hikers that started in Sequoia National Park.  It was like a triple-decker freeway!  (But here’s the truth:  You might see other people every half hour or so.  Not exactly a superhighway, but much more crowded than other spots in the backcountry.) 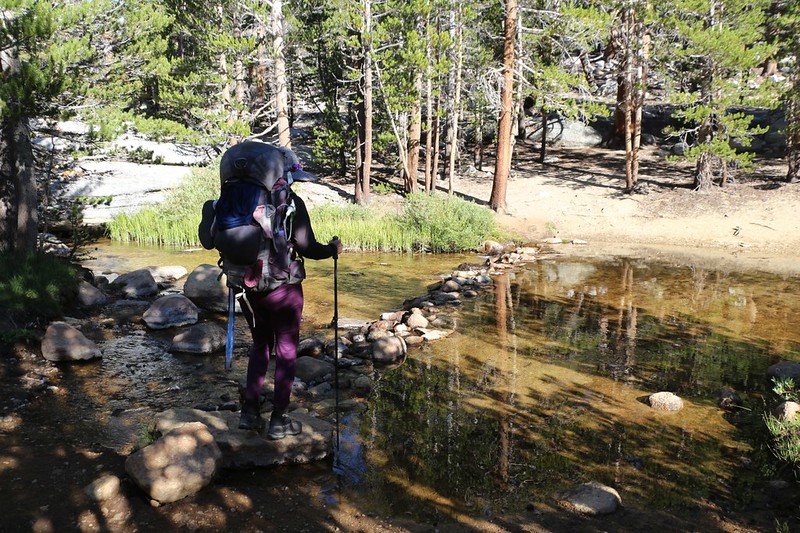 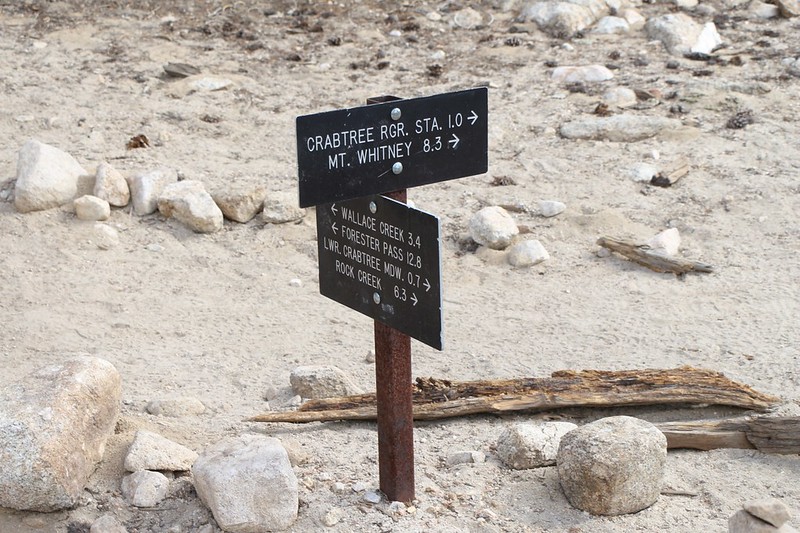 Trail sign on the PCT where the Mount Whitney Trial begins, and the PCT joins the John Muir Trail

We climbed up and over a broad ridge, and came upon a beautiful spot called Sandy Meadow.  The trail hugged the upper end of this delightfully grassy zone, and we got many views of the peaks to the west and south.  It was so pretty that we stopped for an early break, and even managed to take a posed timer shot of the two of us.  In a normal year we would’ve asked someone else to take our photo, but 2020 and the Covid pandemic put a stop to that.  People were avoiding close contact, so touching someone else’s camera was frowned upon.  In fact, this was the only photo we took of the two of us this entire trip. 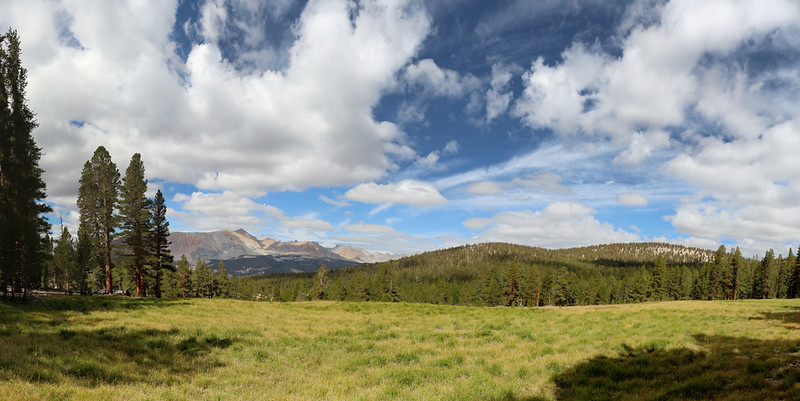 Panorama view west over Sandy Meadow from the PCT-JMT 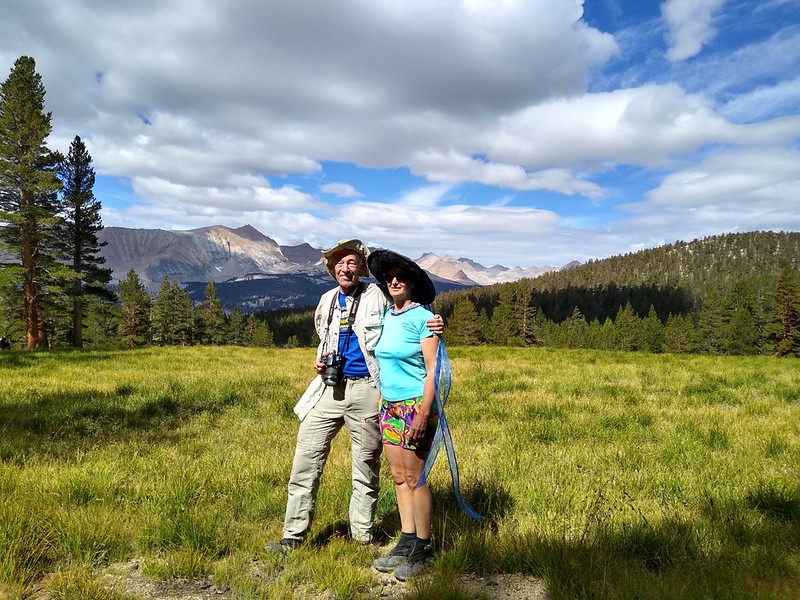 After that, it was time to continue uphill in the sun, as we climbed over a broad saddle on the western ridge of Mount Young.  Once again, we were back up at 11000 feet elevation, and this time Vicki didn’t complain about the air.  It was the heat, instead.  We kept looking up at the puffy cumulus clouds, asking them to please drift by and give us some shade, but they all seemed to be heading elsewhere on important business of their own. 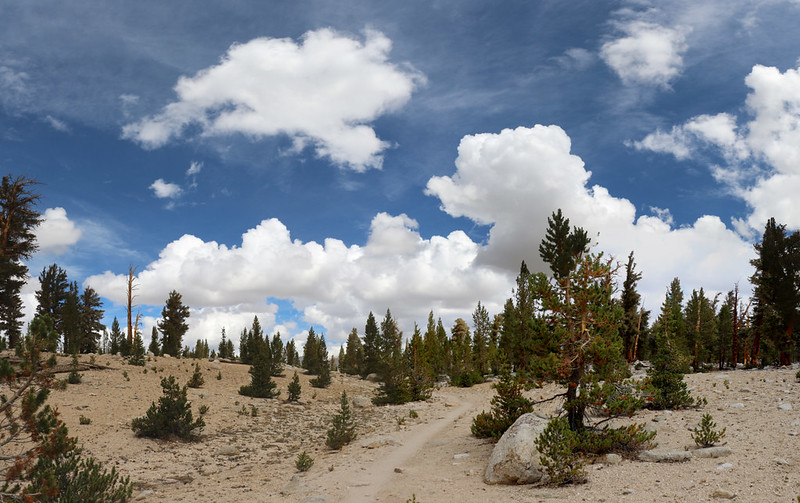 Eventually, we topped the ridge and continued downward, into the Wallace Creek valley.  The clouds slowly took up more and more of the sky, and soon we had a decent amount of shade.  Too bad it happened after the climb!

The trail wove its way through a tumbled landscape, with long rows of piled boulders, which we recognized as glacial moraine.  These piles were a direct result of glacial action, where the ice had advanced, pushing rubble before it, then stopped and melted away, receding and leaving the rocks behind it as evidence. 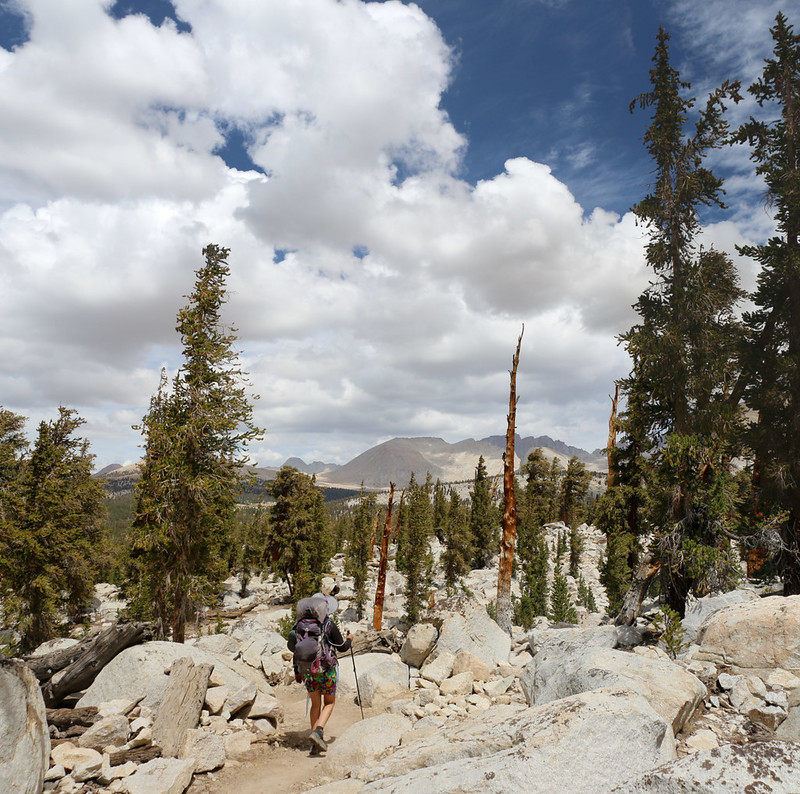 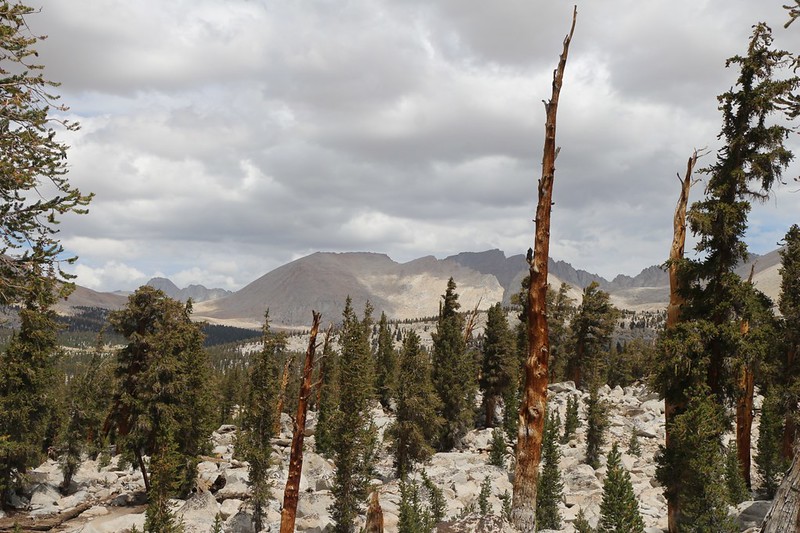 The darker peak to the north, right of center, is Mount Tyndall (14038 ft elev) 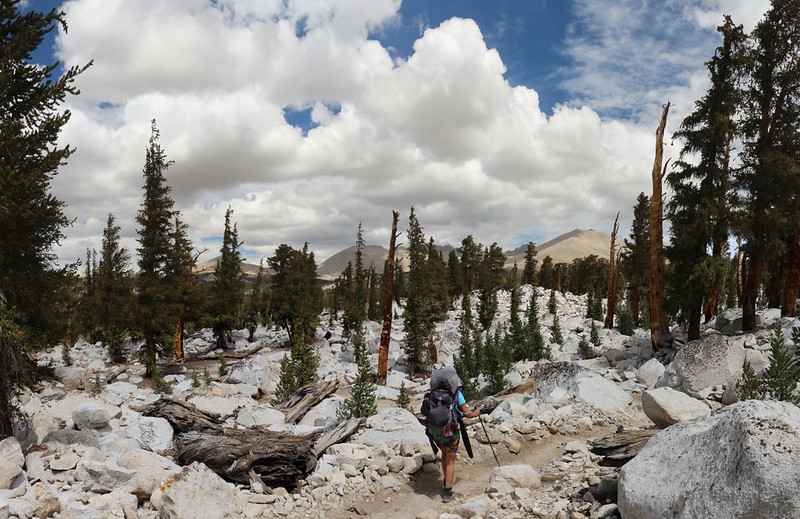 Mounts Tyndall, Versteeg, Williamson, and Barnard in the distance to the northwest

We knew that our destination was somewhere down at the bottom of the valley, and we pushed ourselves to get there.  Until the trail crossed a small creek.  That was when our hot feet cried out in pain.  Take off those sweaty shoes, they seemed to say, and dip us in this nice cool water.  And so we did.  And it was great.  You should always listen to your feet.  After that, the last of the switchbacks passed much more pleasantly. 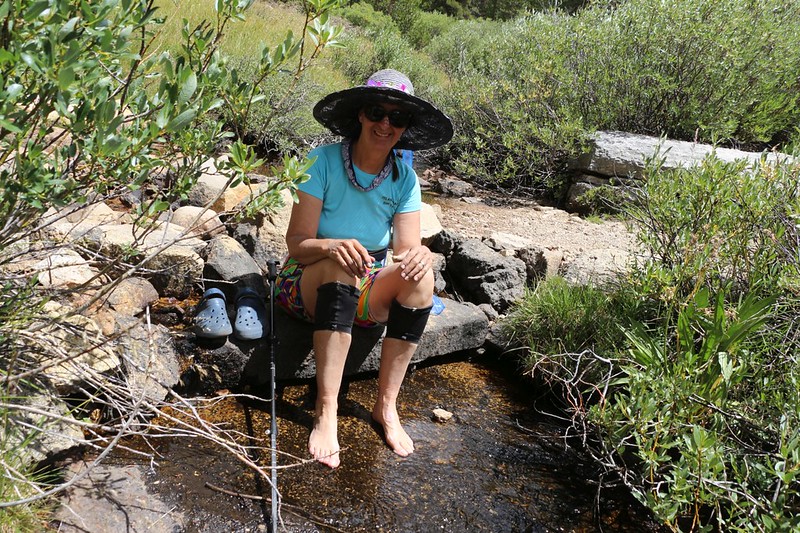 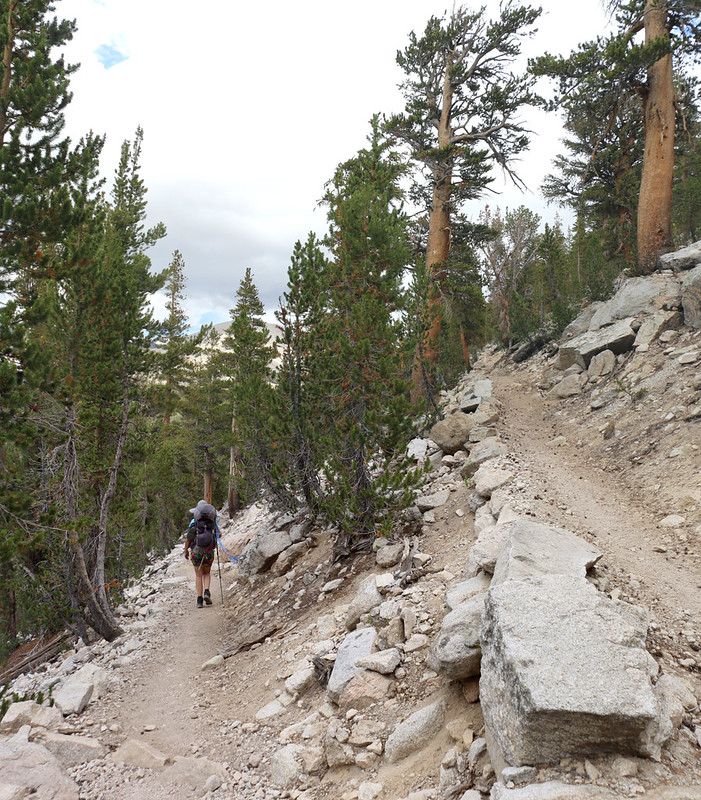 Switchbacks on the way down into the Wallace Creek valley

We arrived at the Wallace Creek camping area at about 2pm, and discovered that it was already crowded with tents.  Hmmm.  Maybe this really was a superhighway!  Or more like hotels at a rest stop.  Anyway, we decided to avoid all of the people by crossing the creek to the northern side.  There was nobody over there, and we found a nice spot not far from the intersection with the High Sierra Trail.  This was much more like it! 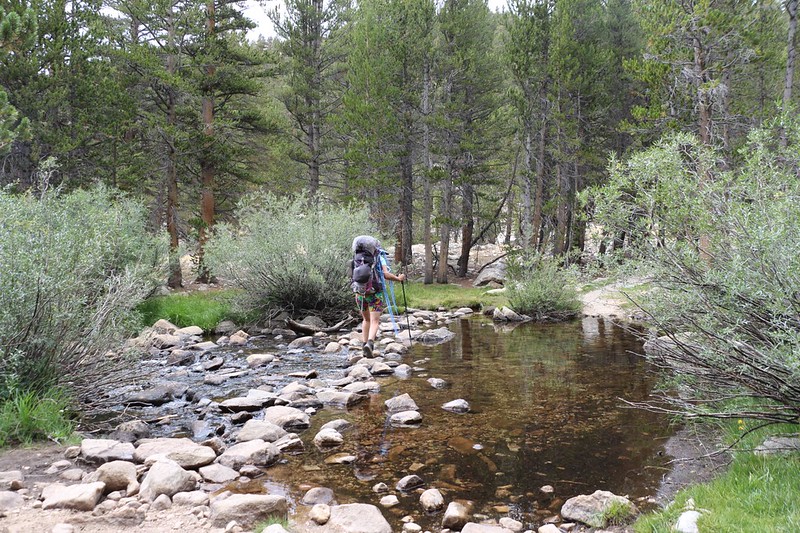 We noticed that all those clouds we saw earlier really did have an appointment elsewhere.  Namely:  The Sierra Crest.  They were looking dark and threatening off to the east.  So we decided to get the tent set up right away, just in case. 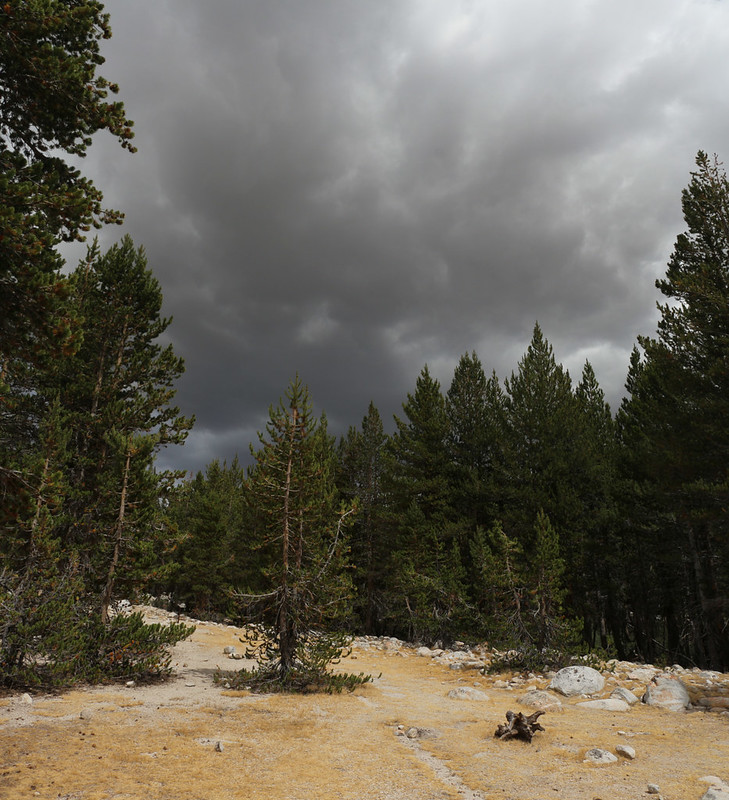 The darkest clouds and thunder were to the east over the Sierra Crest, but it never rained on us

Once that was done, we had the leisure to head upstream seeking a supply of cleaner water and to set up the rest of the campsite.  There was a steady breeze heading east (following the clouds) and Vicki hung her little tarp vertically to make an area of calm for her kitchen. 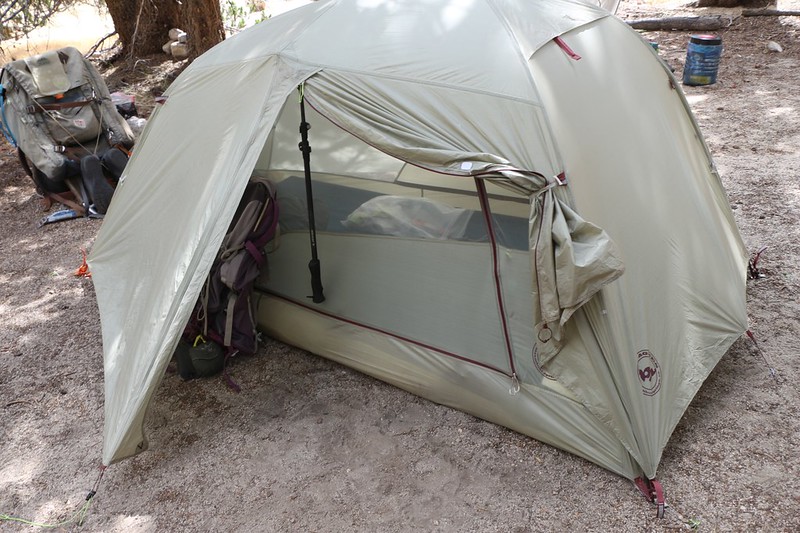 Our Big Agnes Copper Spur UL2 Tent – Would it stand up to a Sierra Thunderstorm? 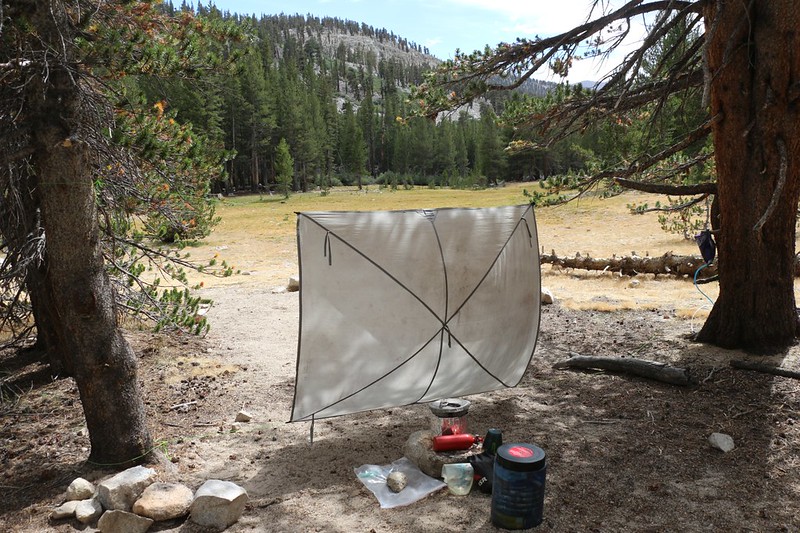 Vicki hung her small tarp vertically near the kitchen to be used as a wind break – it worked!

Then we went inside the tent and relaxed for awhile.  I read my book and Vicki took a short nap.  It was very mellow.

After that, it was time to make dinner.  We ate it in the meadow and listened to the sound of thunder off in the distance, but it never ended up raining on us.  Soon enough, the clouds broke up and the sun got lower.  We put on our warm clothes and took a walk down the meadow along the creek. 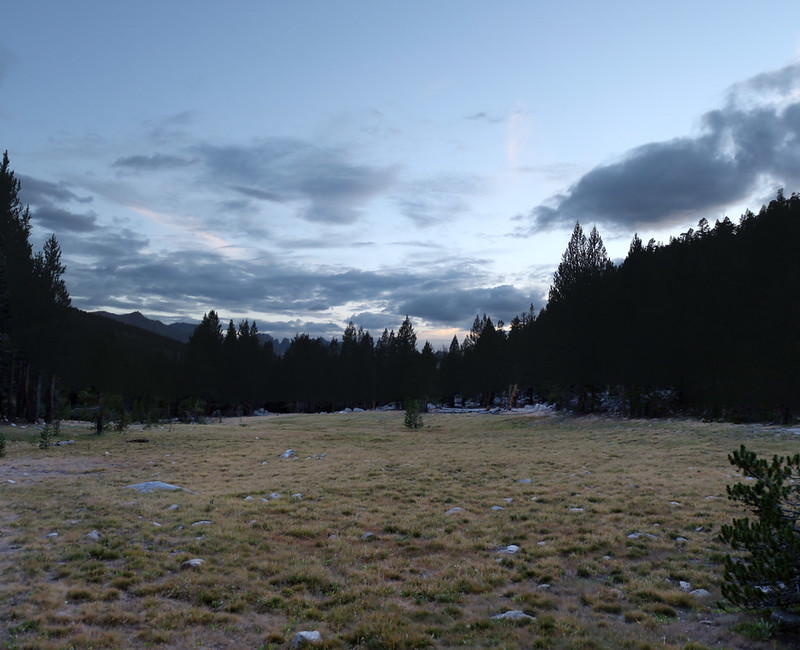 As the sun set, the stormy cumulus clouds began to clear and we had a peaceful night’s sleep at Wallace Creek

We got in the tent as the sun went down, and pulled out the map.  Tomorrow’s hike was almost entirely downhill, as we followed Wallace Creek down into the Kern River Canyon.  It was only 4.5 miles to Junction Meadow, the campsite at the upper end of Kern Canyon (this was where I originally planned to go in one day from Crabtree Meadow).  Vicki thought that she might be able to push on a bit further down the canyon, and save us some miles on the following day.  It seemed like a good idea to me, and that’s where we left it as we headed off to sleep.