We woke up in the dark, thanks to my phone’s alarm, and began packing.  It was rather cold that morning, and we didn’t hustle quite as fast as we would have liked.  We took too long trying to pack while keeping our legs warm in the sleeping bag.  Then we got up for real, ate breakfast, and finished packing.  We had a tough day ahead of us!

The first section of trail descended as it led to the crossing of Parker Creek, which was easy but also a bit sad, as it meant that we had even more climbing to do afterward.  But at least it gave us a chance to warm up and stretch our leg muscles. 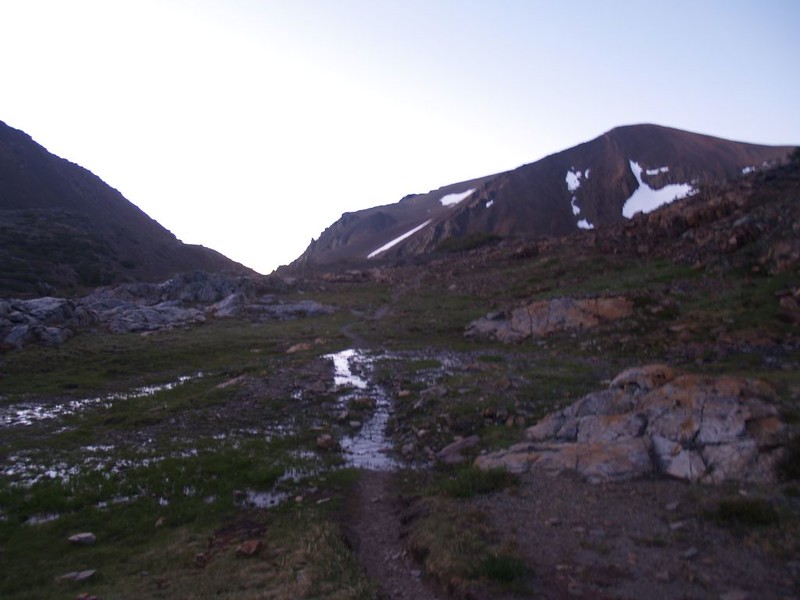 We started the hike just before dawn

Small pond along the trail, Parker Peak and Koip Pass on the far left 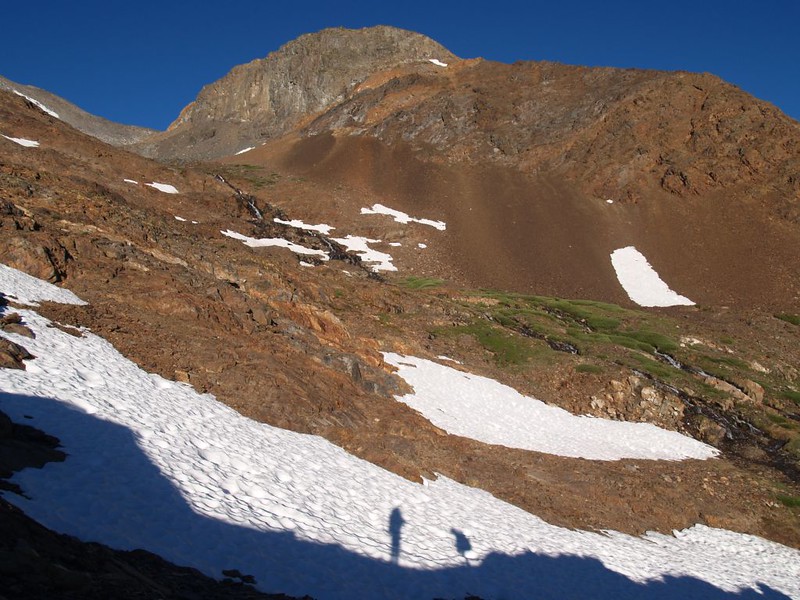 The trail from Parker Pass to Koip Pass is known for its relentless switchbacks.  They grind up the giant pile of flinty scree that is also known as Parker Peak.  The trail itself is well-packed, so you don’t suffer from sliding downhill each step like on normal scree, and the chips of rock beneath your feet make interesting clinking sounds as you step on them.  But it must be said that the uphill nature seems like it will never end.  And the sun was at the perfect angle to hit us at we climbed, while leaving the slope itself in semi-shadow.  So we got a bit warm, but not too badly as it was still early.

Meanwhile, it was hard to complain very much, as the views continued to get better with each step.  Parker pass and the view into Yosemite was below us on one side, and the view east toward Mono Lake was simply awesome.  As we neared the 12,000 foot line, snow became abundant,  There were patches of it everywhere, though not on the trail, and we could tell that some of it never melted, as it had an icy look, like the tiny remnants of the once-mighty glacier that formerly filled this entire valley.  As the trail climbed yet higher, we were rewarded by a fine view far down into the Parker Creek watershed, where the ancient glacier left  a large moraine, marking the extent of its travels during the last ice age. 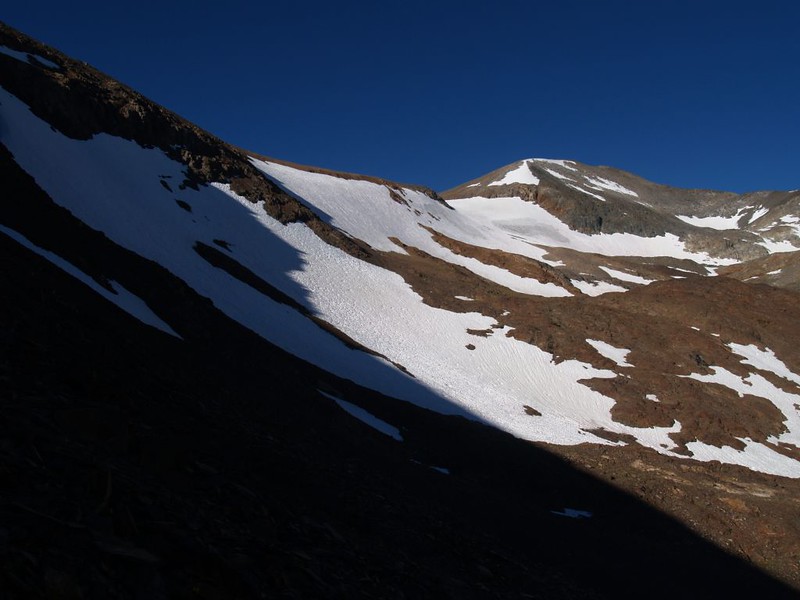 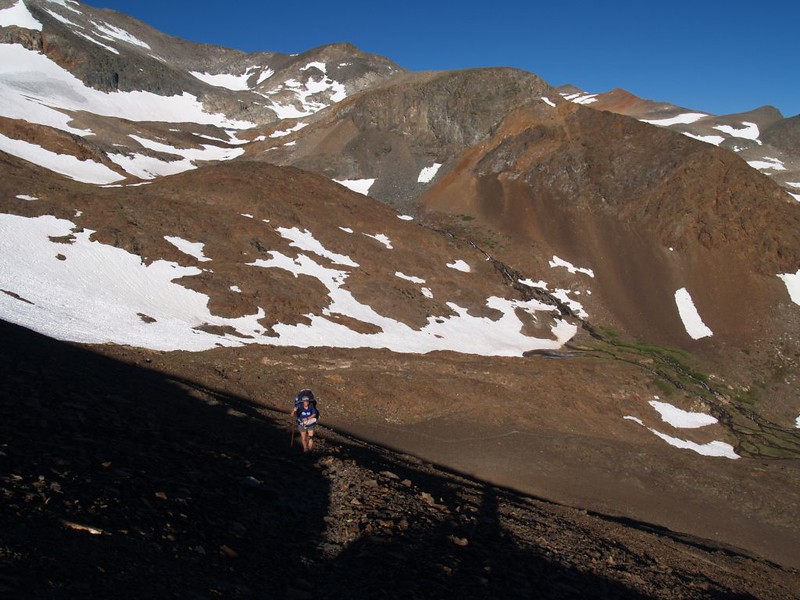 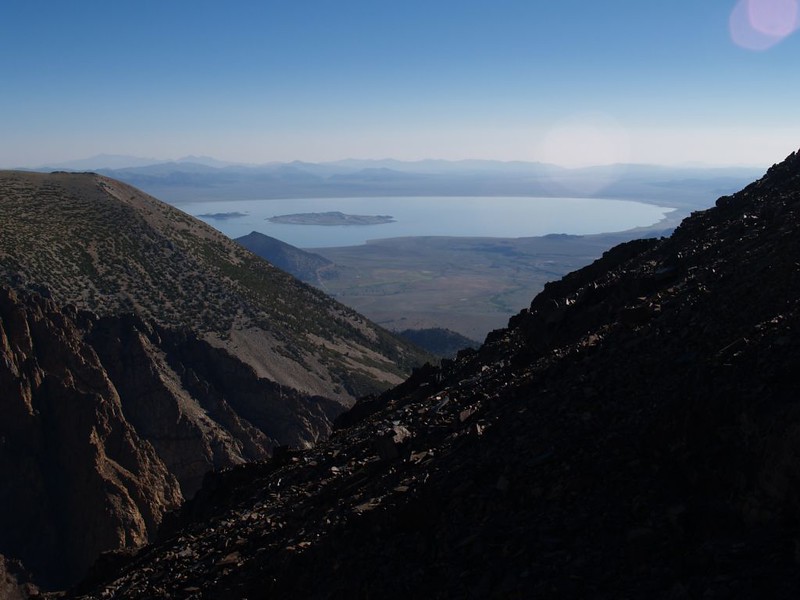 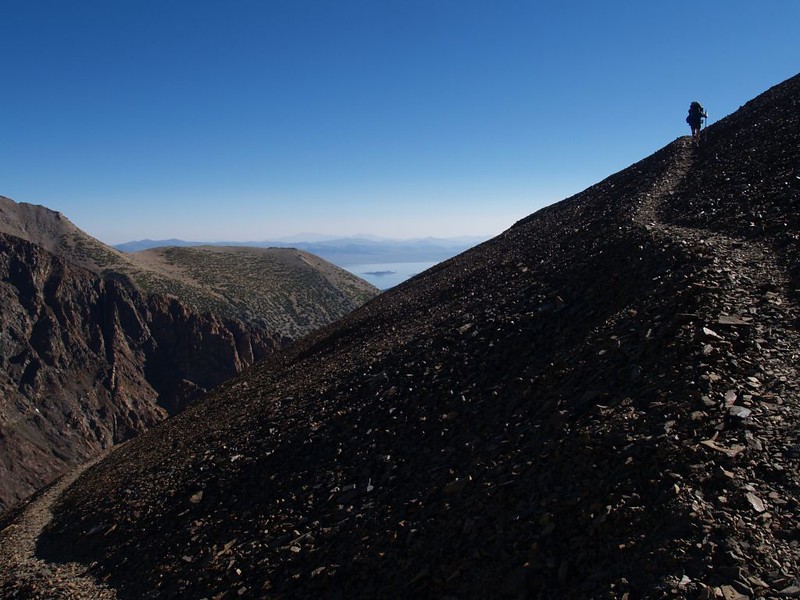 Mono Lake and the endless switchbacks 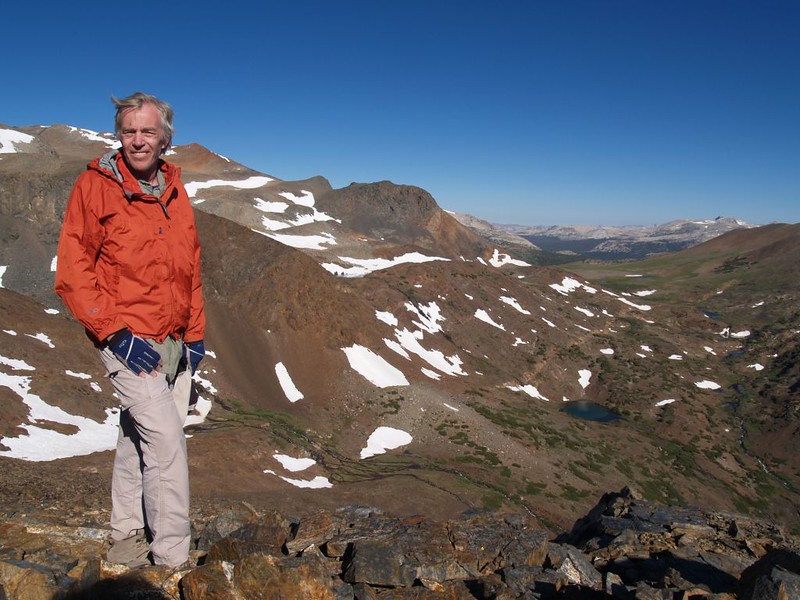 Me, looking back over Parker Pass into Yosemite, with Mount Conness on the far distant right 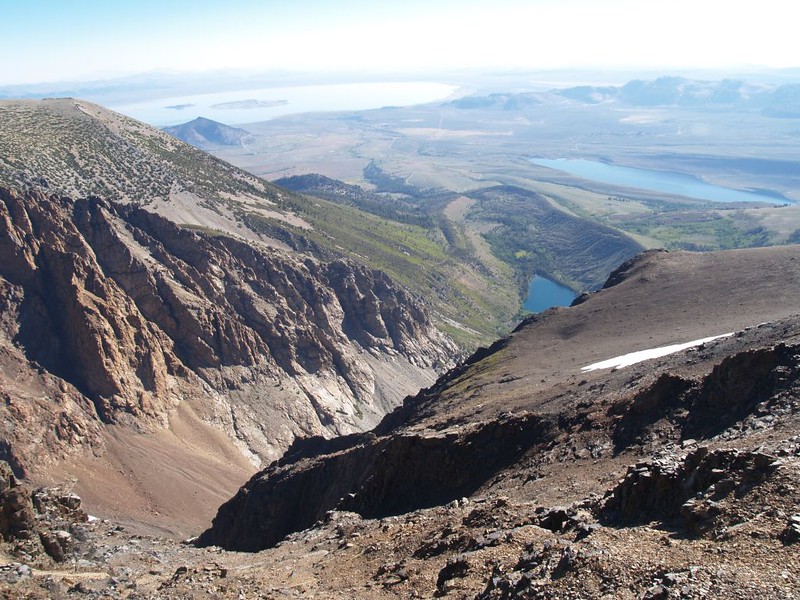 The air was thin and crisp as we neared Koip Pass.  The sky was that deep, deep blue that is only seen at high elevations.  Vicki calls it 10k-Blue.  And the camera never seems to fully reproduce it.

Vicki was both thrilled and exhausted when we finally made it to the top.  The pass itself was rather broad and featureless, littered with small stones.  It was so high above the treeline that only the toughest plants would grow, plants that could survive being frozen repeatedly, remaining dormant under snow and ice for eight or more months per year.  It was an austere place to live, but for travelers such as ourselves it was excellent.  New views south had opened up, and we could see the High Sierra marching off into the hazy distance.  It was beautiful.

Vicki wasn’t able to appreciate it immediately, however.  She was so tired that she collapsed next to our packs and took a nap almost instantly. 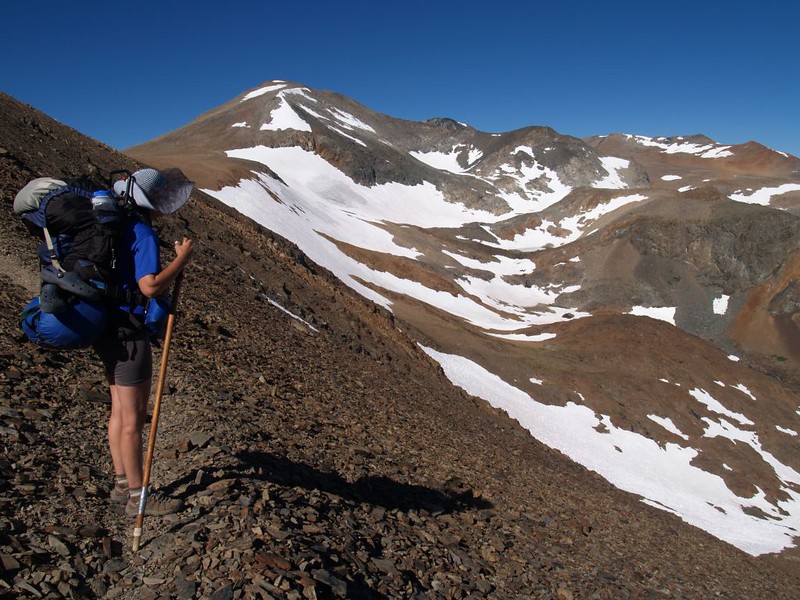 On the traverse to Koip Pass, now that the switchbacks are finished. Koip Peak left of center 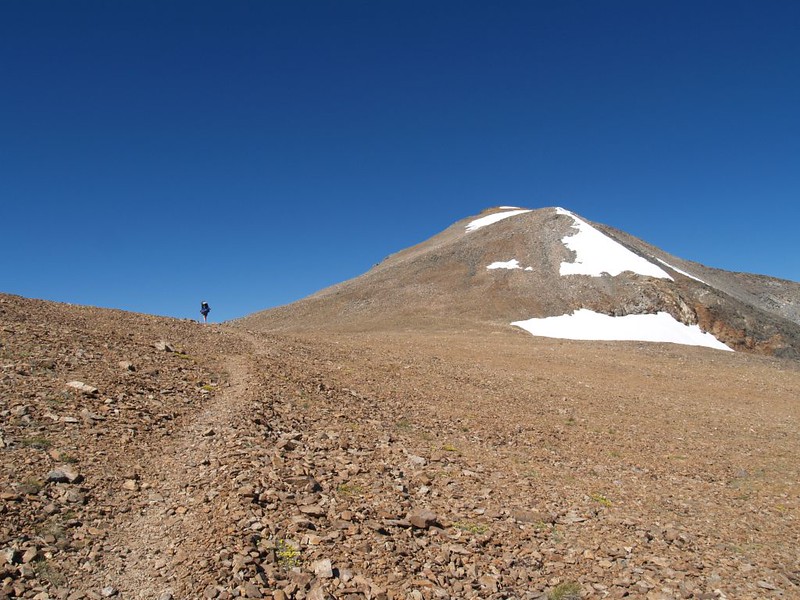 Vicki reaches Koip Pass, with Koip Peak on the right 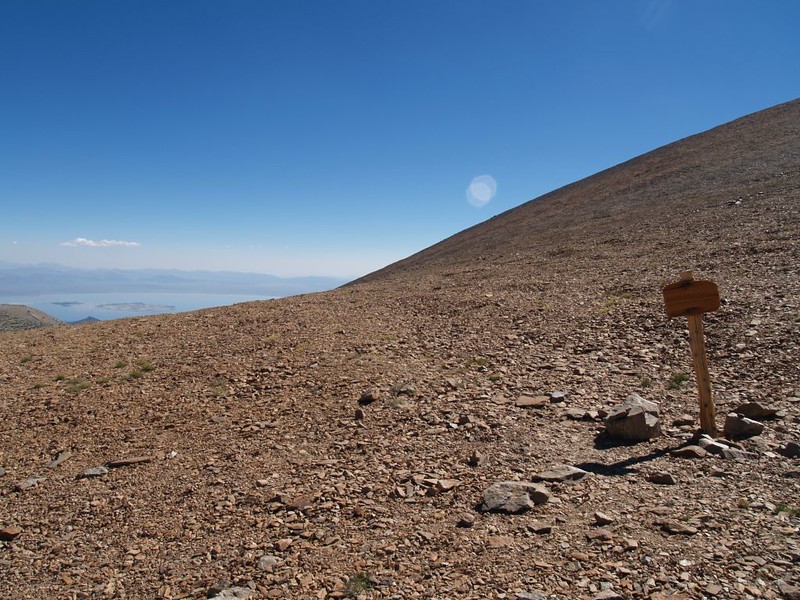 Trail sign at Koip Pass, with Mono Lake in the distance 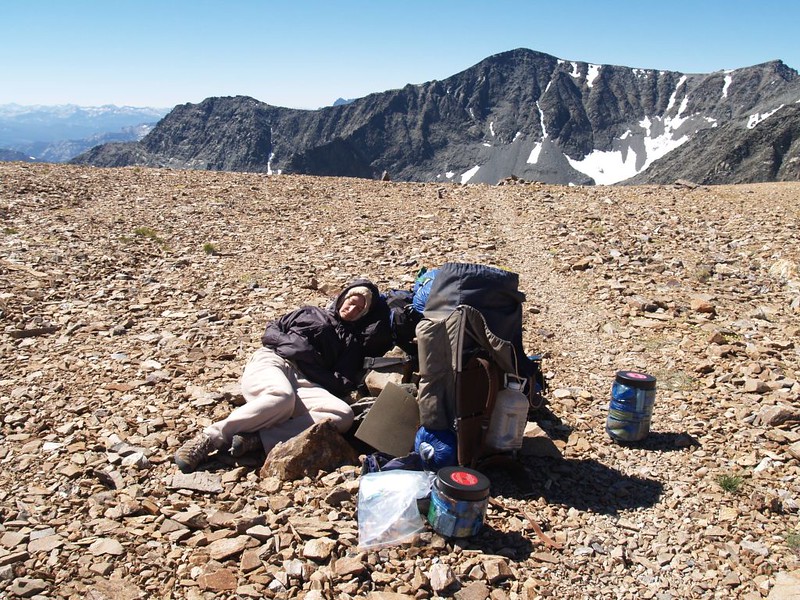 An exhausted Vicki takes a nap at Koip Pass, with Blacktop Peak (12720 feet) in the distance

Of course, this was all a part of our master plan.  The main idea was that Vicki would sleep at the pass while I bagged a nearby peak or two!  My main goal:  Koip Peak.  At 12962 feet in elevation, it would become the highest peak I’d ever climbed.  Unfortunately, it was a mere 38 feet shy of being a thirteener!  But I wasn’t worried, the namesake of this long ridge, Kuna Peak, topped out at 13002 feet.  It was only a mile or so further along the ridgeline.  If I had time I would try to bag it, as well.

So I started out on the ever-steepening hike up the loose rocks and small talus.  It was only 700 feet higher than the pass, so how long could it take?  Well, the answer is that it takes a lot longer than you think.  It didn’t help that I kept stopping to take photos; the views were superb, and kept on getting better.  This is why people climb mountains! 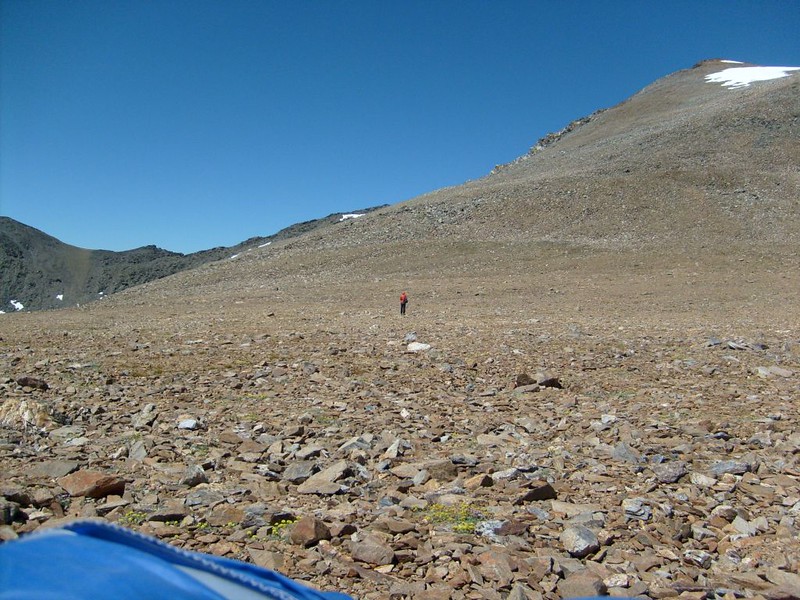 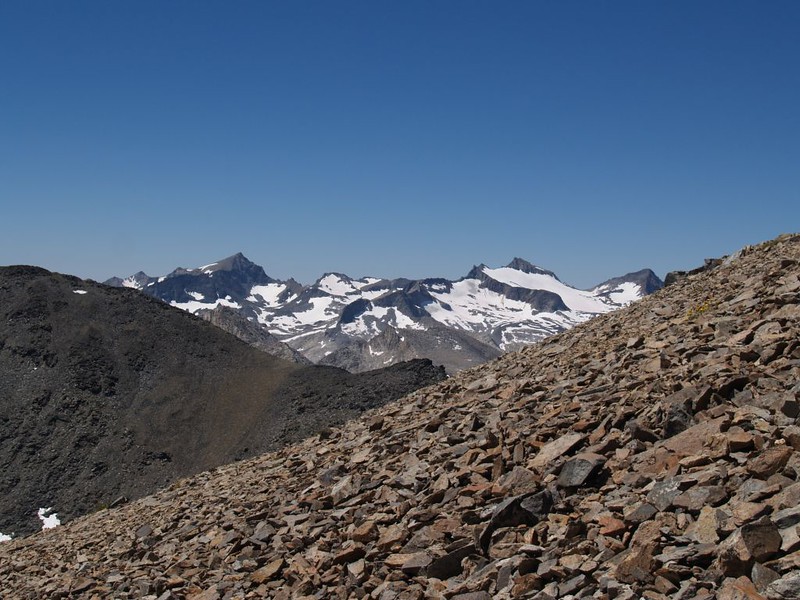 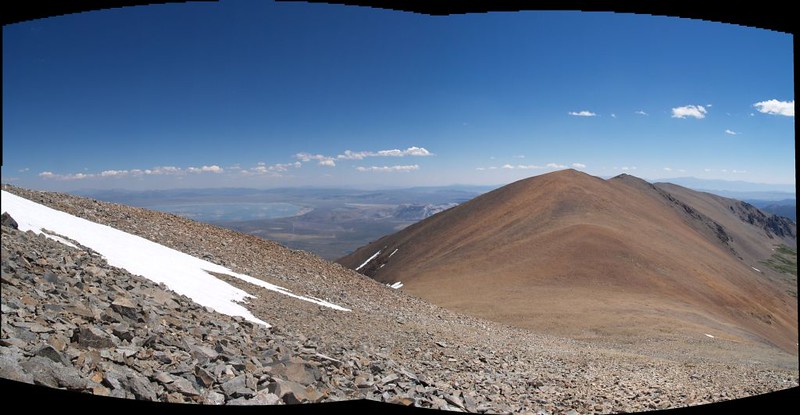 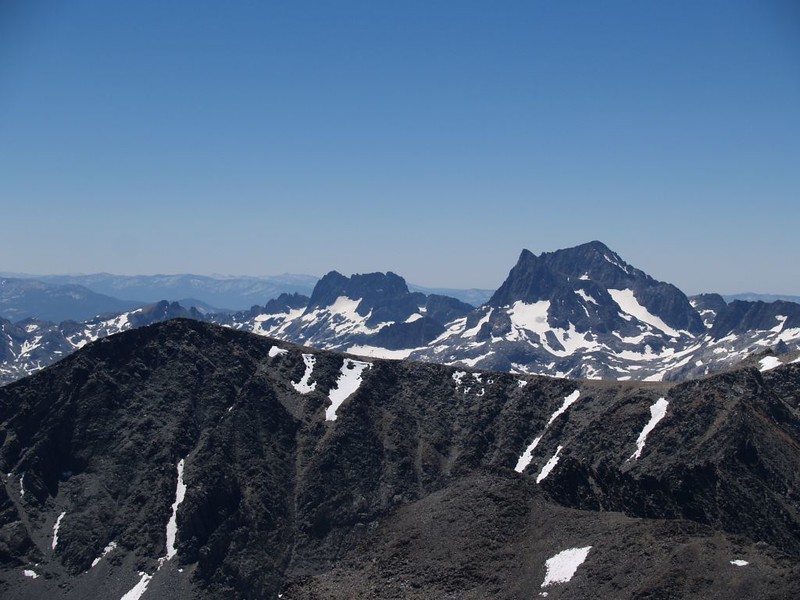 Zoomed-in view of The Minarets, Banner Peak, and Mount Ritter

Panorama video from the summit of Koip Peak, elevation 12,962 feet 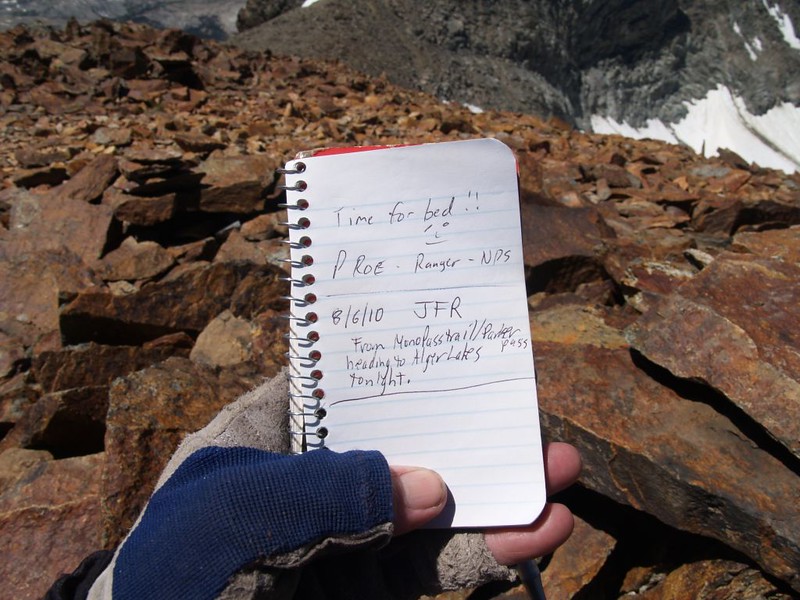 My entry in the Koip Peak Summit Regster

After signing the register and taking tons of photos in every direction, I had to make a decision:  Would I head for Kuna Peak?  It had taken me nearly an hour to get up here, and Kuna was a similar distance further.  It looked like relatively easy ridge hiking all the way.  I looked back down at the tiny dot on top of the pass that I knew was Vicki.  I also noticed the cold breeze blowing, and I really didn’t want her to freeze just sitting around waiting for me.  And the breeze made up my mind:  I decided to put off becoming a thirteener for another trip.  It wasn’t an easy decision, but like they say:  The Mountain Will Always Be There.  And there would be another trip with another opportunity someday.  I would have to content myself with that.  So I took one last wistful look at Kuna Peak and headed back down to Vicki and the rest of the day’s hiking.

Looking north at the Kuna Crest, with Kuna Peak the high point on the left 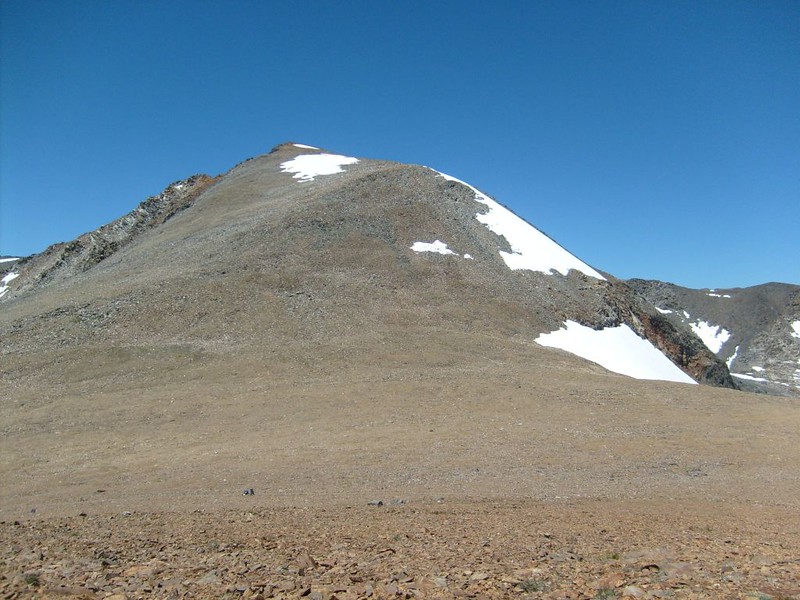 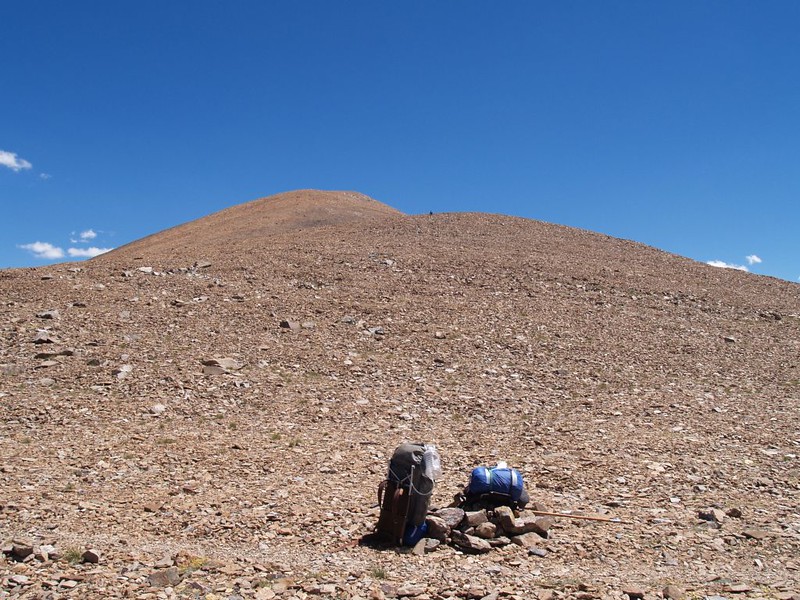 Parker Peak from Koip Pass. That’s Vicki up there on the shoulder.

When I got back down I discovered that Vicki was gone!  Where was she?  I looked all around. There was nowhere to hide up here!  Then I heard a “Yoo Hoo!” in the distance.  Vicki had climbed up the side of Parker Peak!  I shook my head sadly.  What a fool I had been.  I should have gone on to Kuna!  But it was too late now.  I got out some snack and munched it, waiting for Vicki to arrive. 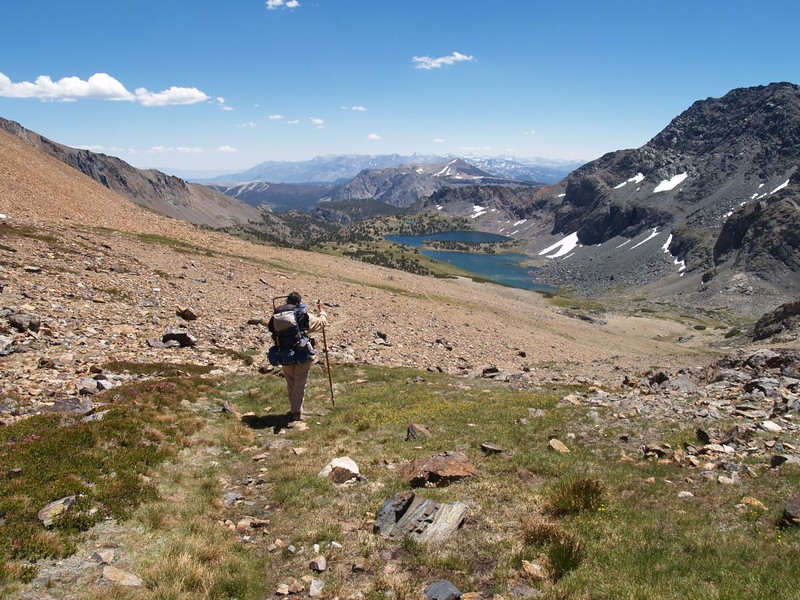 Hiking down to the Alger Lakes from Koip Pass

It was an easy two mile hike to the Alger Lakes, downhill all the way.  We found a nice spot just above Lake 10610 and set up our tent.  We took a bit of a nap, then got up and explored the nearby area.  There was a minor waterfall on the creek, and the water was icy cold.  But that didn’t stop Vicki.  She had plans to do some laundry that day.  So we filtered some water for dinner, and also filtered a bit extra to heat up for the clothes.  This helped keep her hands from freezing solid.  Then we strung a line and hung everything out to dry. 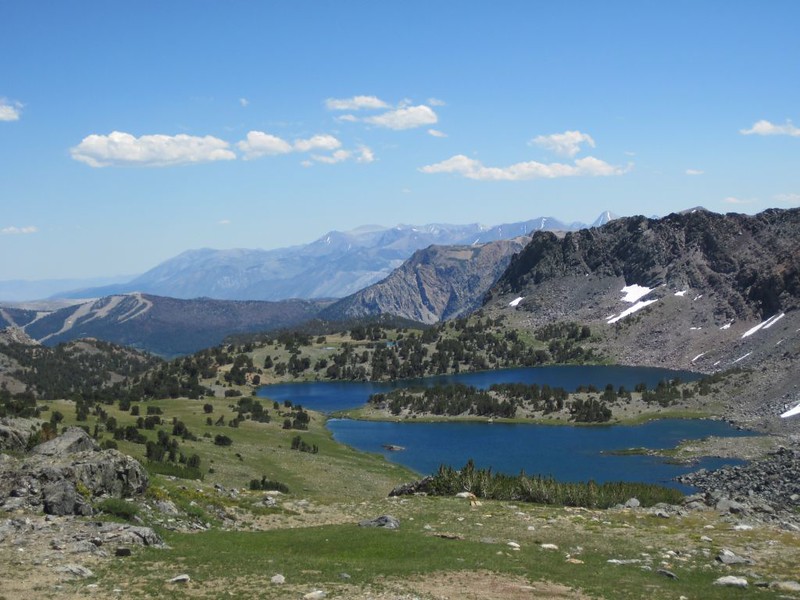 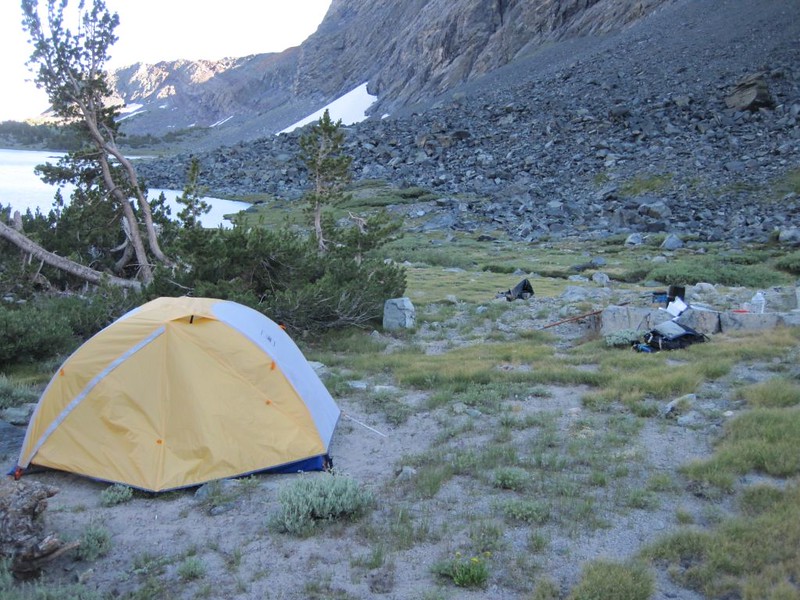 Our tent and campsite

The sun set early behind the Kuna Crest, and the air got cold.  We heated more water for dinner, and ate it sitting on a comfy boulder, looking out over the lake.  We talked about the hike, about how today had been the highest point on the entire hike.  Vicki was relieved, as she had struggled mightily with the lack of air up there on the pass.  The worst was over, she said.  I reminded her that tomorrow we planned to be bushwhacking across unknown territory, to a vague yet unknown destination.  She laughed.  As long as we weren’t heading for 12000 feet she’d be fine.

And then we went to bed.

For more Day 2 photos and videos see my Flickr Page.