Day 1 Summary: Starting at the Mono Pass trailhead, hike to Parker Pass, leaving Yosemite and entering the Ansel Adams Wilderness (because we’re not allowed to camp in the Tuolumne River Watershed).

We woke up early, packed up everything we needed in our backpacks and carried anything left over back to the car (and the bearboxes near Lembert Dome where the car was parked). We were almost an hour early for the bus, but we waited patiently in the cool morning air. We took the blue backpackers bus to the Mono/Parker Pass Trailhead and began hiking right away. We were excited to get hiking, headed into the high country. No more crowded campgrounds for us! 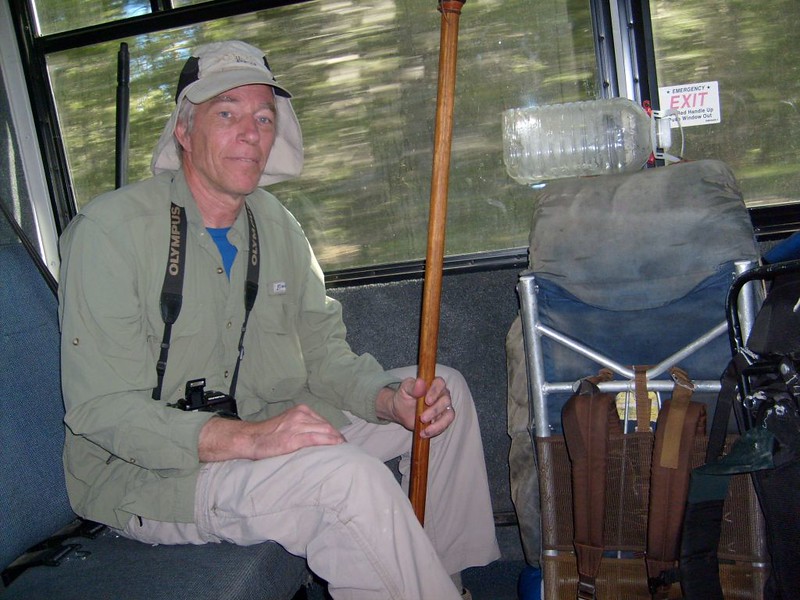 On the bus to the Mono Pass Trailhead 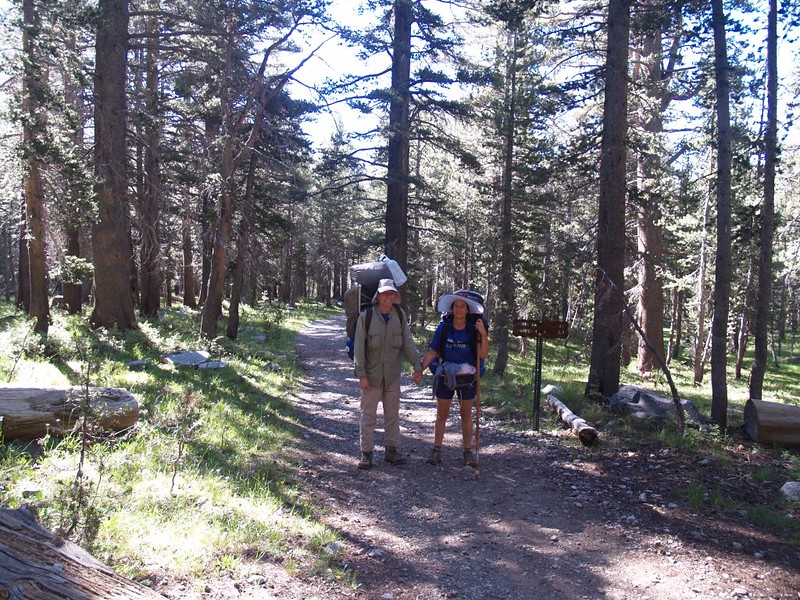 Soon enough we were enjoying the easy ascent as the trail followed Parker Pass Creek.  There were plenty of views to the southwest of the peaks on the Kuna Crest.  We knew that on our way back, a week from now, that we would be hiking on the other side.

We filtered water along the way and the mosquitoes began attacking Vicki’s legs.  She hates mosquitoes with a passion, and had sewn a custom pair of leg nettings.  Unfortunately, as with many new inventions, the bugs had yet to be worked out on this one.  She discovered that netting doesn’t let anywhere near as much air through it as you might think, so her legs were still getting too hot.  She also discovered that the low brush that lines many narrow trails has countless tiny branches that love to snag fragile mesh.  After a particularly tough snag, the mesh tore, and the bugs were able to attack!  She had to stop for a quick repair.  She continued wearing them for quite awhile, but eventually gave up on the idea, and put them away for the duration of the trip.  Back to the drawing board.  We applied some bug spray instead. 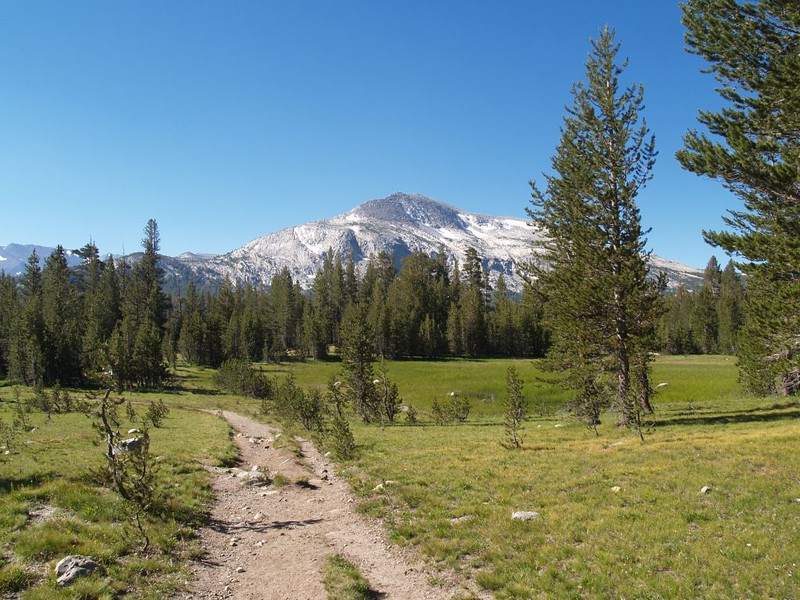 This is Mammoth Peak in Yosemite, not the famous one… 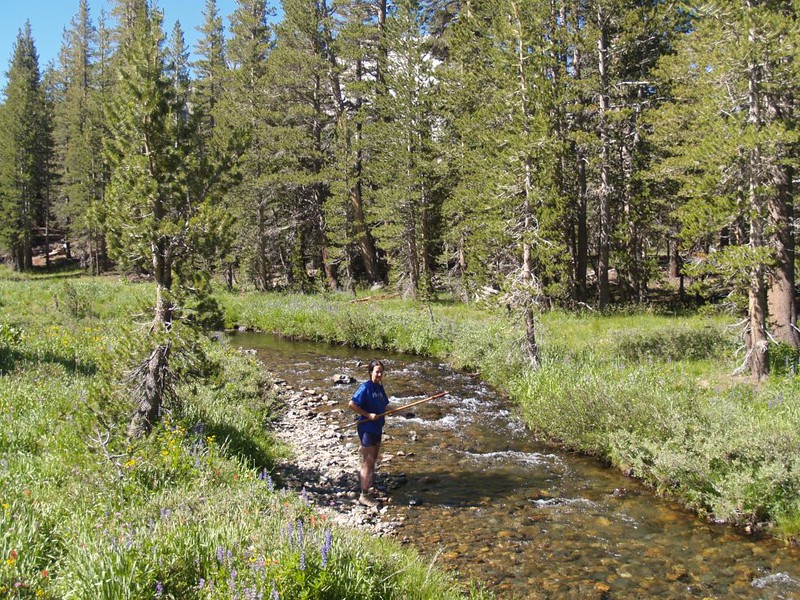 Vicki checking out the Dana Fork of the Tuolumne River 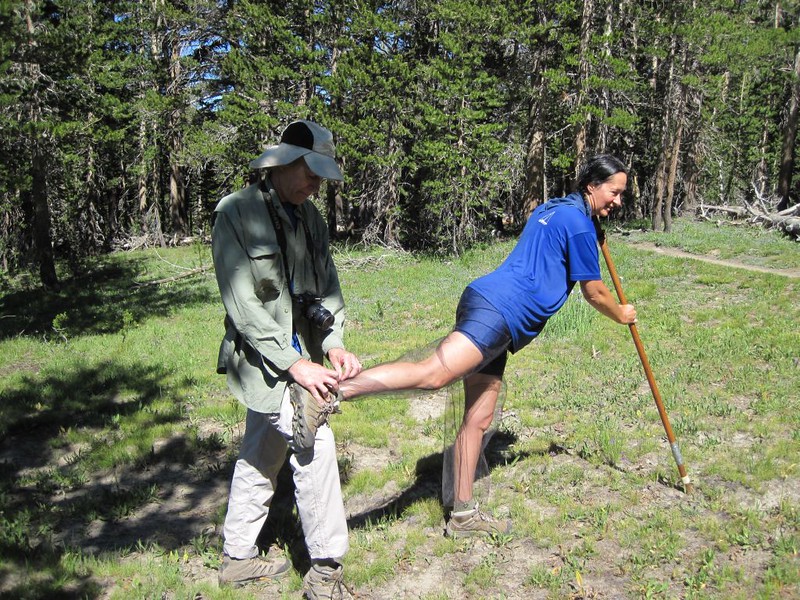 I help Vicki with her experimental handmade bug net leggings. Like a harem girl, but functional! 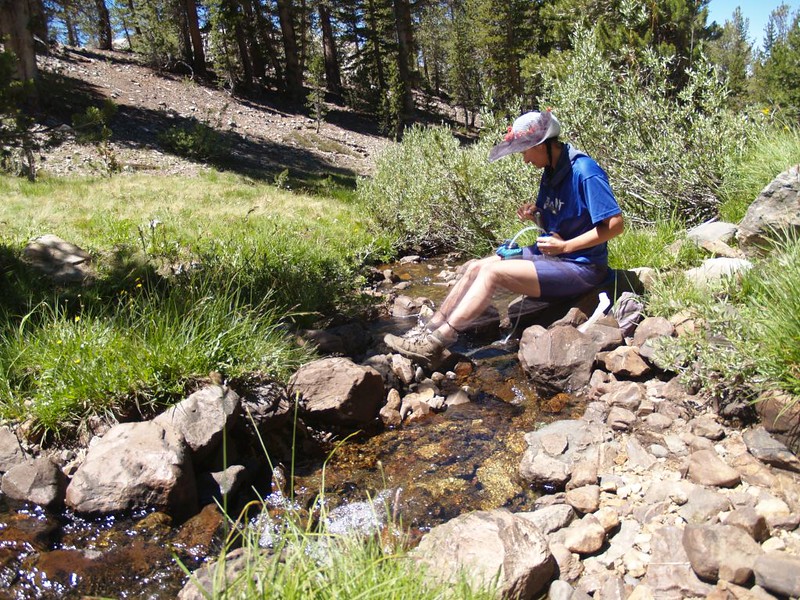 Vicki filtering water at a small side-creek. She’s wishing that she had arm-nets, as the bugs love the water.

The trail started off easy, but then climbed steadily for a few miles until we reached Mono Pass, at 10,600 feet elevation.  Rather than take the trail directly to Parker Pass, we decided to go on a short detour to check out the pass, as well as some old mining cabins that were showing on the topo map.  They were in excellent shape, considering that they were over 100 years old.  We tried to imagine living here under those conditions, and were thankful that we didn’t have to.  Those were hardy men, all of them hoping to strike it rich. 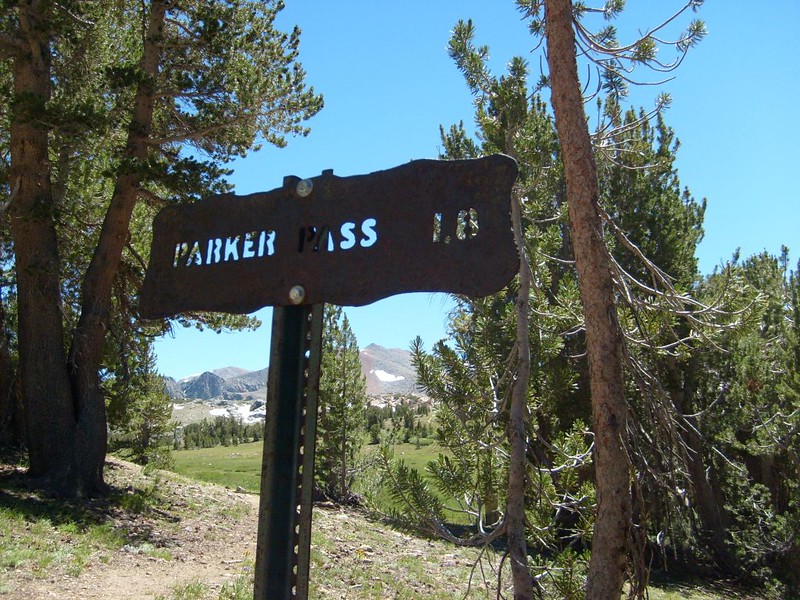 Rusty yet Solid Steel Trail Sign for Parker Pass, our eventual goal for the day 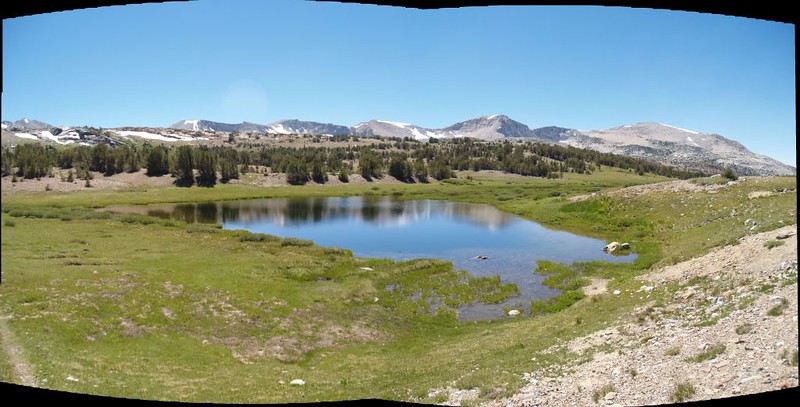 A small pond near Mono Pass, with the Kuna Crest in the distance 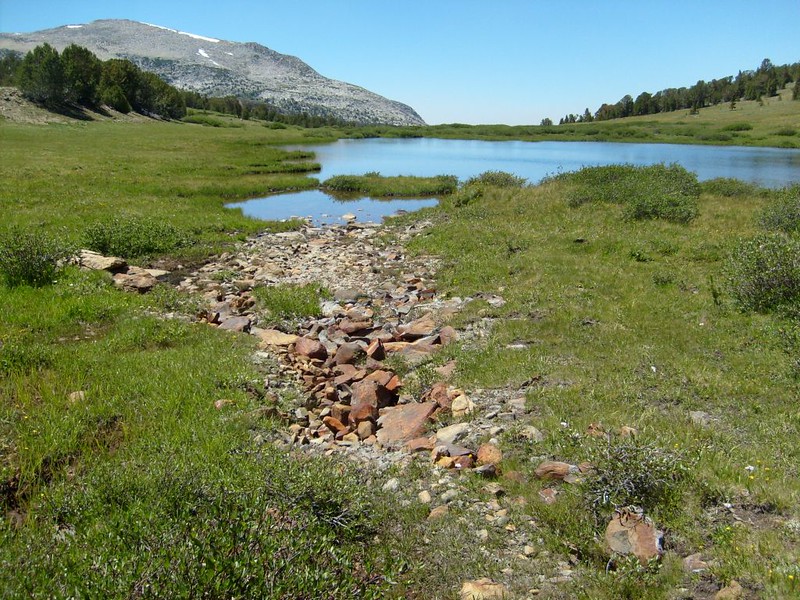 Looking east across Summit Lake at Mono Pass, with the south ridge of Mount Gibbs on the left 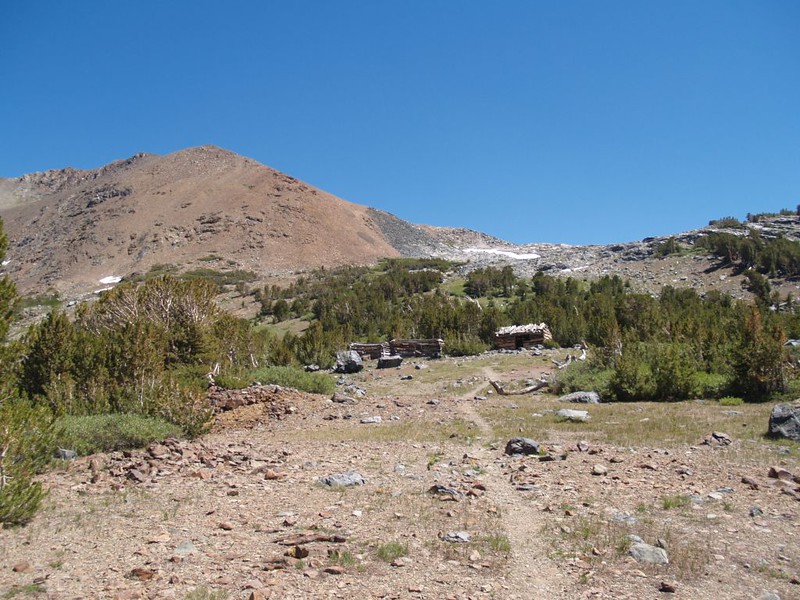 There were several old Miner’s Cabins at Mono Pass, and the map showed old mines 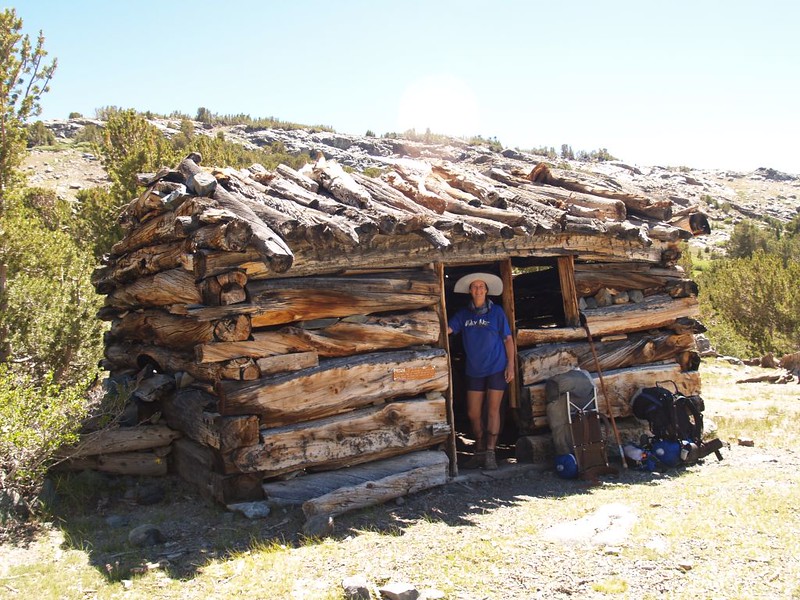 Video of one of the Mono Pass Log Cabins 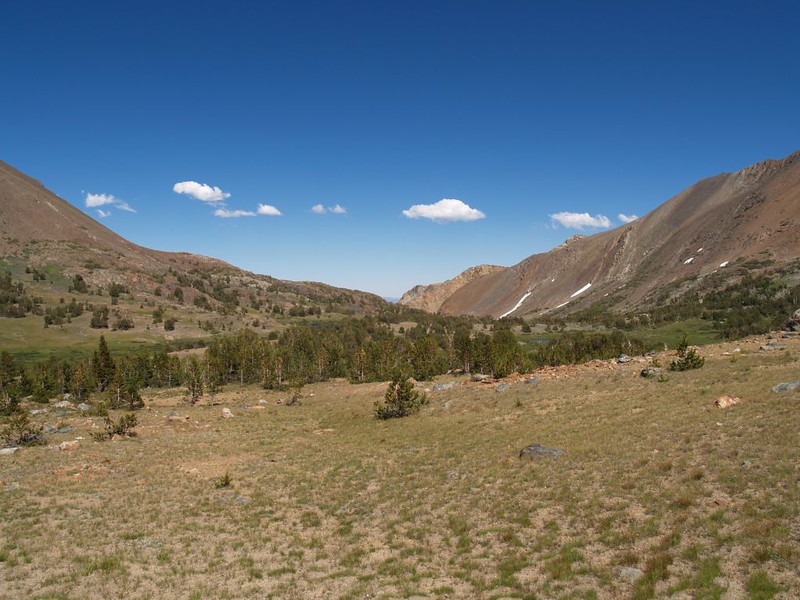 We hung out there for a while, taking a rest and eating some snack, but then it was time to head for our destination:  Parker Pass.  Our wilderness permit specified that we must leave the park before we set up camp, which was a bit odd.  It was a multi-day Yosemite-issued permit but no camping was allowed in Yosemite!  Not from the Mono Pass Trailhead, at any rate.  I concluded that they didn’t want any human waste entering the Parker Pass Creek watershed, and wondered if the Tuolumne Meadows infrastructure used the water directly from this source.

The trail continued onward, for another mile or two and another 500 feet up.  The air was getting thinner, and the pines sparser.  We were above the tree line, where only a few stunted limber pines eked out a difficult existence.  Mainly there were grasses and small flowering plants.  Snow patches showed on the north slopes of nearby mountains, and the meltwater was running everywhere.

By this time Vicki was having some issues with the elevation.  There simply wasn’t enough air for her, and that caused her pace to slow as we continued the long climb to the pass.  I took photos at the top as I waited for her to catch up. 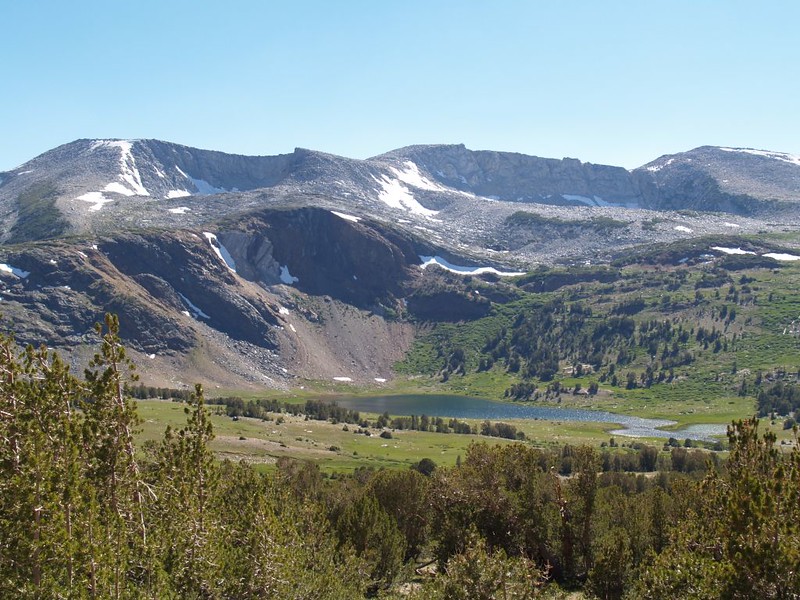 Spillway Lake and the Kuna Crest from the Parker Pass Trail 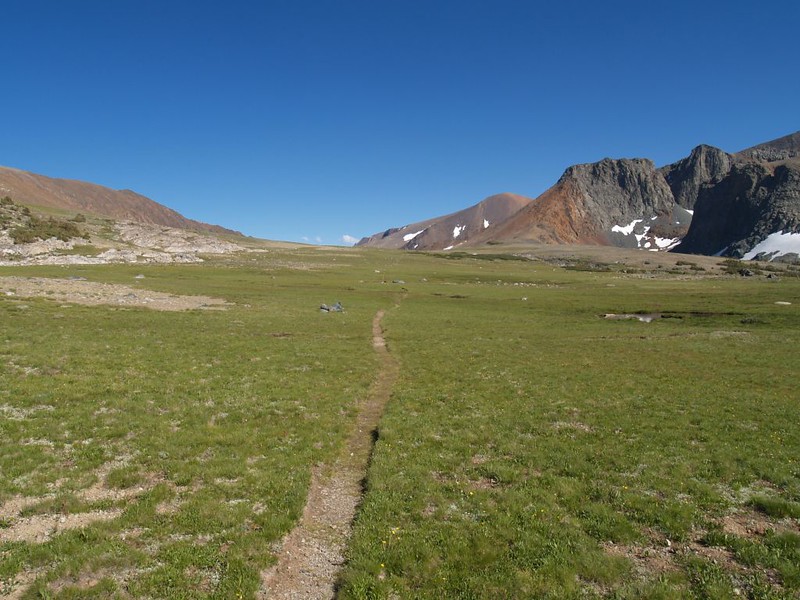 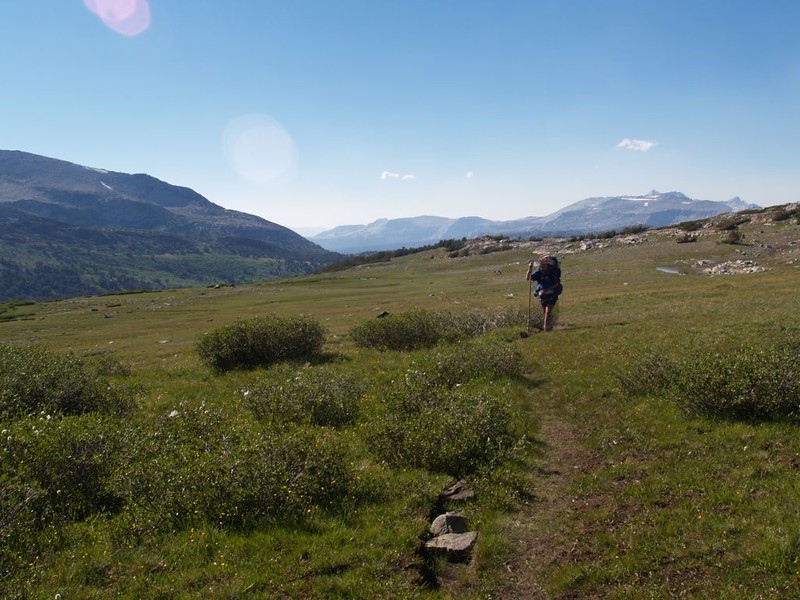 Looking back toward Yosemite from Parker Pass 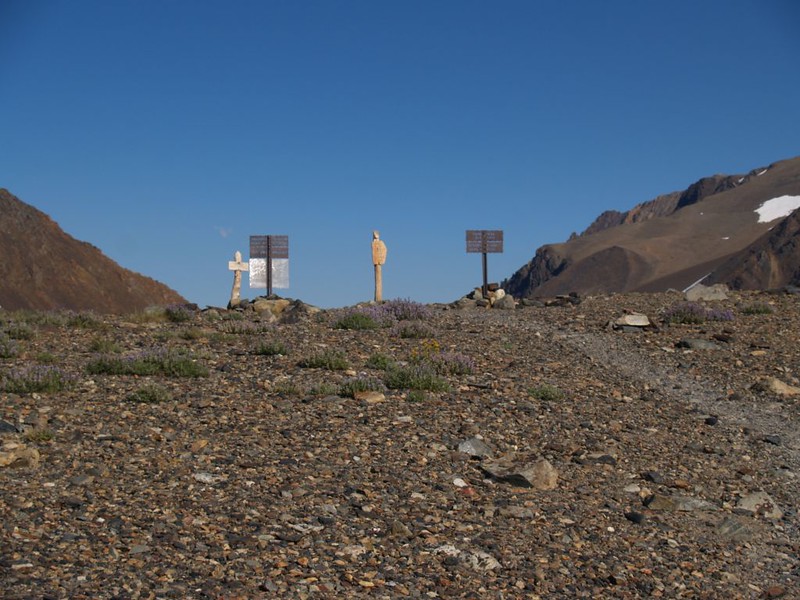 Trail signs at the top of Parker Pass. Leaving/Entering Yosemite and/or the Ansel Adams Wilderness 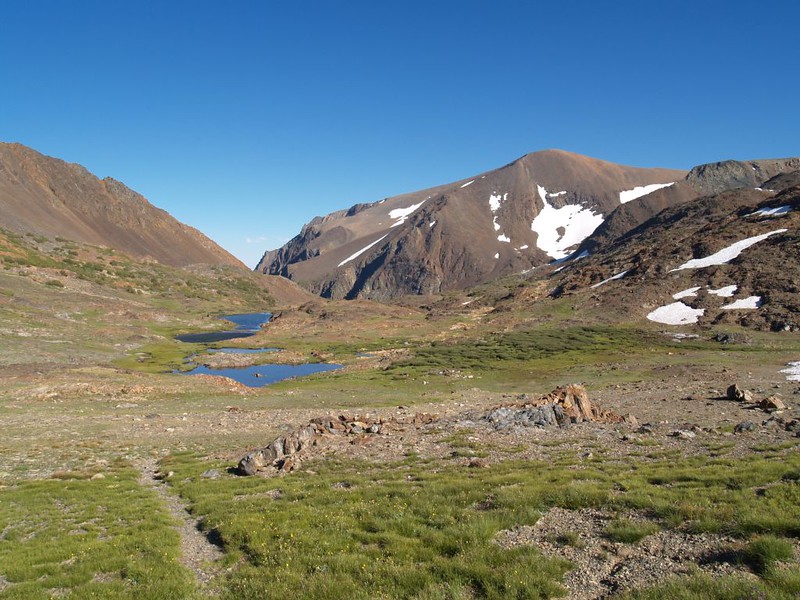 At the pass, we left Yosemite and entered the Ansel Adams Wilderness, part of the Inyo National Forest.  We were now on the east side of the Sierra Crest, and were allowed to camp pretty much anywhere we wanted.  Vicki was exhausted by this time, so I suggested we try to find a spot not much further downhill, near some alpine lakes.  That suited her just fine, I think.  It was hard to tell because she looked and sounded like a zombie.  She didn’t care, in other words, and really only wanted to lie down and take a nap.

So we wandered down the trail, searching for a spot that was both flat and dry.  This wasn’t easy to find, as there was plenty of snow melting, causing all of the flat spots to become small ponds.  We had to choose our steps carefully to avoid soaking our shoes.  But we eventually found a decent spot, and set up the tent immediately.  Vicki climbed inside and got some warm clothes on as I blew up the air mattresses.  Then she took that nap she so desperately needed.  I also put on some warmer clothes. 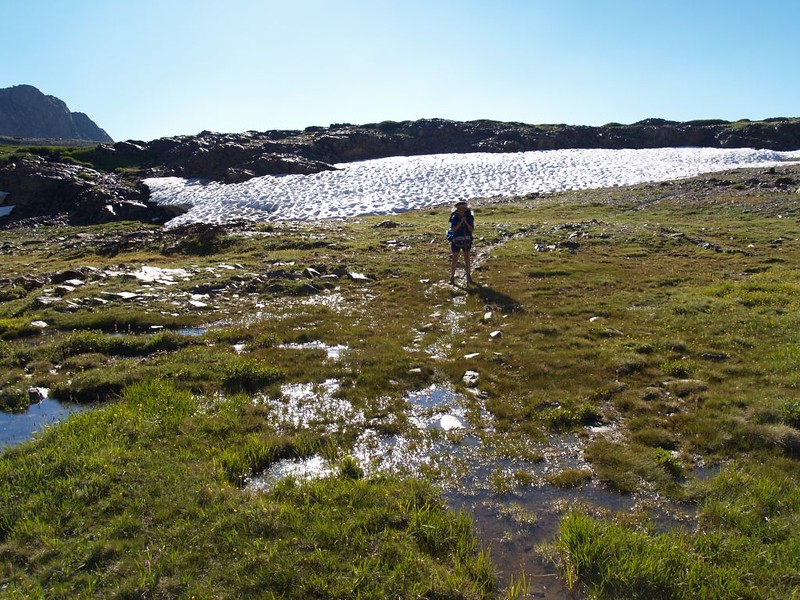 Soggy marshy trail conditions below a snowbank near Parker Pass

Video from our campsite just beyond Parker Pass

It didn’t take long for Vicki to recharge.  Soon enough she was feeling energetic.  She went out to make some dinner, but then retreated.  There were way too many mosquitoes out there!  So she put on extra layers and deployed her special hat’s secret weapon:  A self-contained mosquito net that covered her face completely!  She laughed as she watched the countless bugs swarming around the hot CO2 exhaust from the stove.  They were powerless to bite her.

Luckily for us, there was an occasional breeze, so the clouds of bugs would get blown away every so often.  This allowed Vicki an opportunity to deliver some food to her mouth beneath the netting.  As for me, I had already sprayed some DEET on my face and hands, the only exposed skin I had, and even though they flew all around me, they never quite landed, except on my pants and jacket which were impervious to them.

After dinner, we decided to take a walk and see where we’d be hiking the next morning.  We hiked down the trail and checked out a rushing snowmelt stream, and had fun walking across residual snowfields.  Snow in August!  That was proof enough that we were up in the High Sierra. 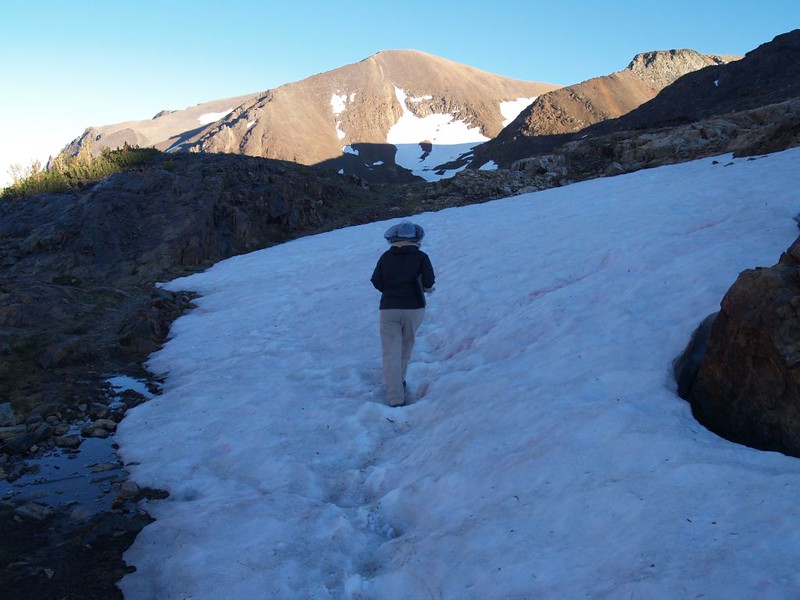 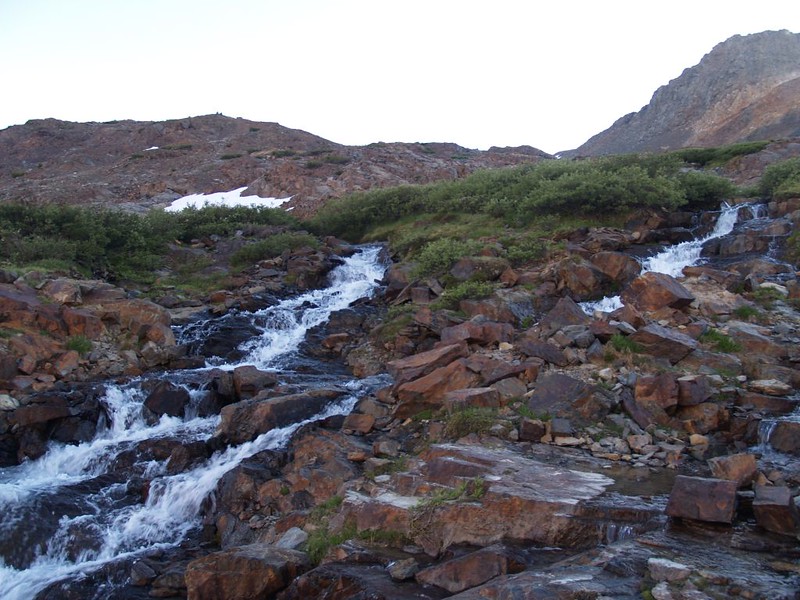 We headed back to the tent while it was still light and got ready for bed.  We knew that tomorrow we’d be climbing over a thousand feet into even thinner air, and Vicki wanted to get up super-early so that we’d climb it while the air was still cool.  In fact, she wanted to hike in the dark, but I vetoed that idea as I couldn’t take photos without light.  So we compromised by deciding to pack in the dark and leave at the crack of dawn. 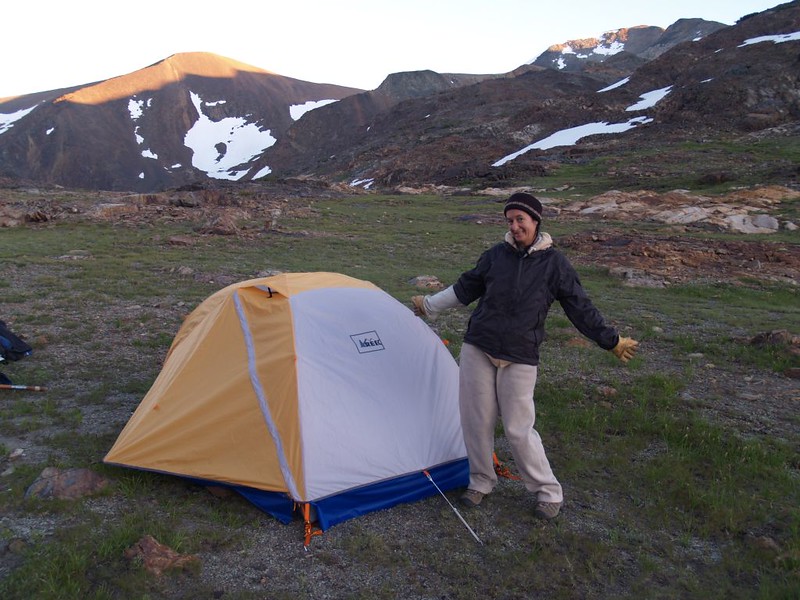 For more Day 1 photos and videos see my Flickr Page.