Our plan for this day was to day-hike up to Dragon Lake, then come back to camp, pack our gear, and backpack south on the PCT for a mile and a half, until we reached a spot just below Glen Pass.  The park’s rules clearly stated that you could only spend two nights at the Rae Lakes, and this was our workaround, in order to get in an extra day of exploring in this beautiful basin.

We woke up fairly early and ate breakfast, then packed up everything we could, and left it all inside the tent (except the bear cans which we hid in the shade).  I carried Vicki’s pack with just the ten essentials and we headed off to Dragon Lake. 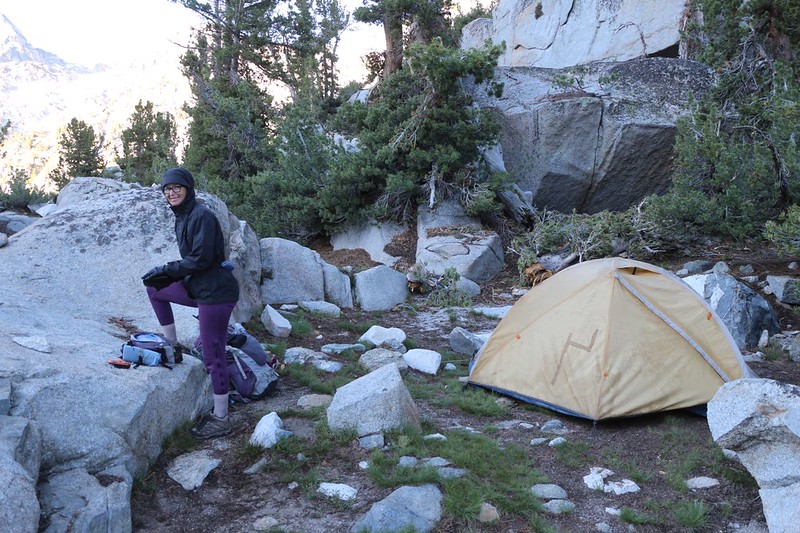 Getting ready for a day-hike to Dragon Lake. We left our mostly-packed-up gear inside the tent for now

We arrived at the stream crossing and had a fun time trying to keep our balance on the knee-deep boulders and avoid slipping off into the thigh-deep sections.  The water was quite cold!  My feet were in pain from the iciness initially, but were already getting numb by the time I reached the farther shore.  Vicki wore her SealSkinz waterproof socks for the crossing and was quite happy as her feet stayed warm.  Then we dried our feet in the sun and continued northbound on the PCT as it followed the shore of upper Rae Lake,  We saw large trout swimming along the shore, and plenty more jumping for insects further out on the lake.  But we saw no fishermen; they were probably hiking right now. 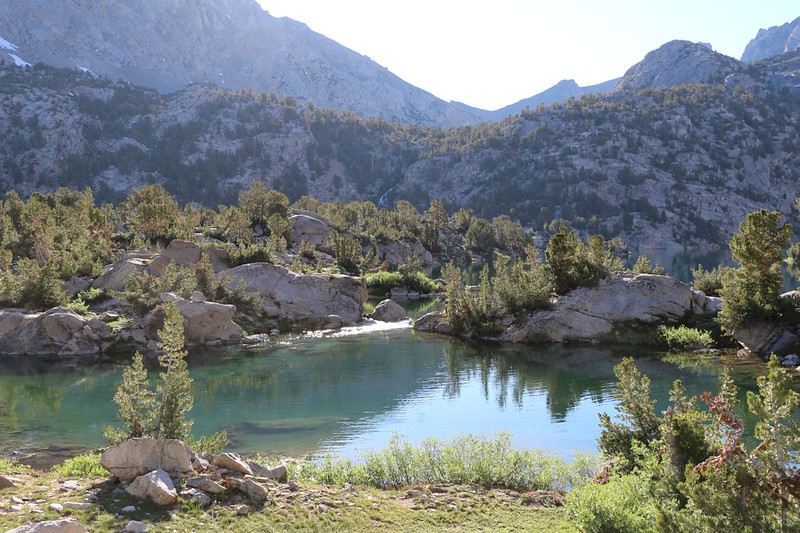 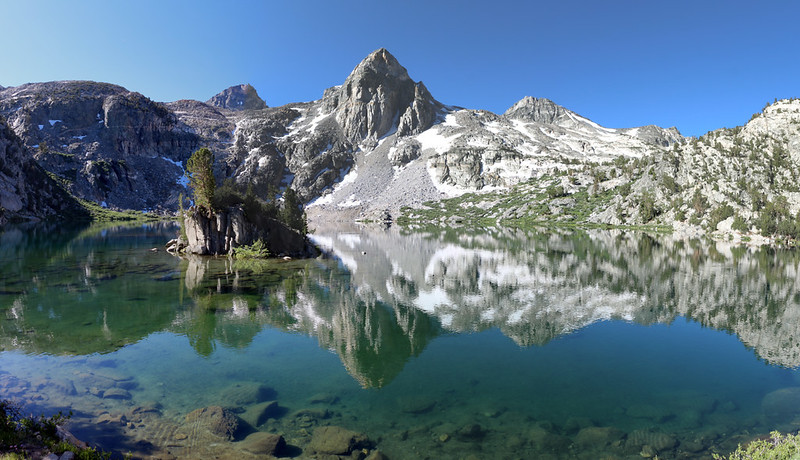 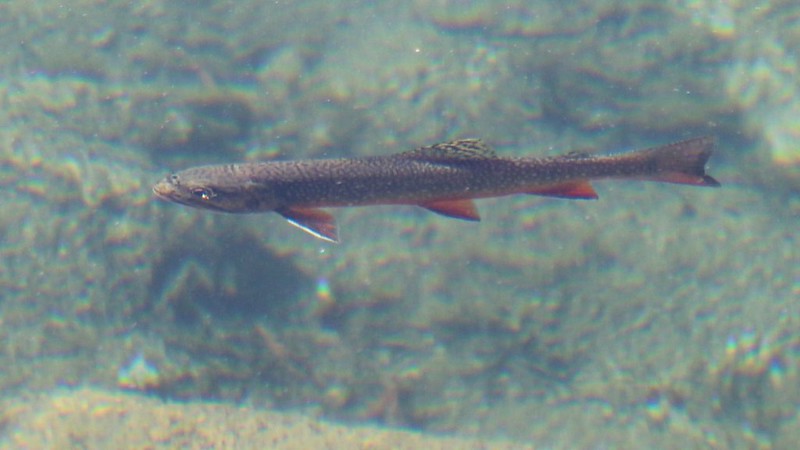 Close-up of a Trout swimming in upper Rae Lake

Using the GPS, we were able to find the intersection of the PCT and the Dragon Lake Trail.  To our dismay, it was completely unmarked.  There was only the faintest of paths leading off across a meadow.  Was that the trail?  We had no idea.  But we knew that this was not a good sign.  There was no mention anywhere on the internet describing this trail as being unmaintained.  Just the same, this sort of thing has never stopped us before.  If anything, we took it as a challenge!  So off we went, heading uphill just left of the cascading waterfall.  We knew that if we followed the creek, we’d make it to the lake, so how bad could that be? 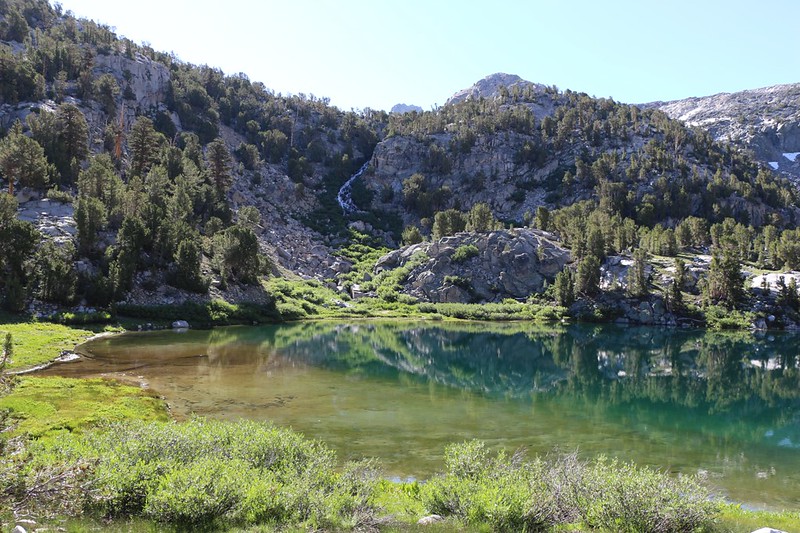 View of the waterfall on Dragon Creek, the outflow stream from Dragon Lake, as it cascades into upper Rae Lake

Well, needless to say, we lost the original trail almost immediately.  We foolishly believed the track on the USFS Topographic Map as it was shown on our GPS, and headed way too close to the waterfall.  We were probably following a deer trail, but those are notorious for disappearing on a whim, and soon we were scrambling, sidehilling along a very steep and dangerous slope covered in slippery pine needles and loose soil.  We could see the waterfall just fine, but we could also see that the hillside was getting even steeper in front of us.  We were extremely unhappy campers at that moment.  Simply following the stream uphill wasn’t going to work.  Oh no, not at all.  Vicki didn’t like it much, but she finally agreed that we needed to climb ninety degrees to the left, directly upward in other words, until we found the real trail.  And that’s what happened.  The trail was there, albeit faint and covered with pinecones and dead sticks, but at least it was a trail.  After that, we made good time, and enjoyed the views of the basin, behind us. 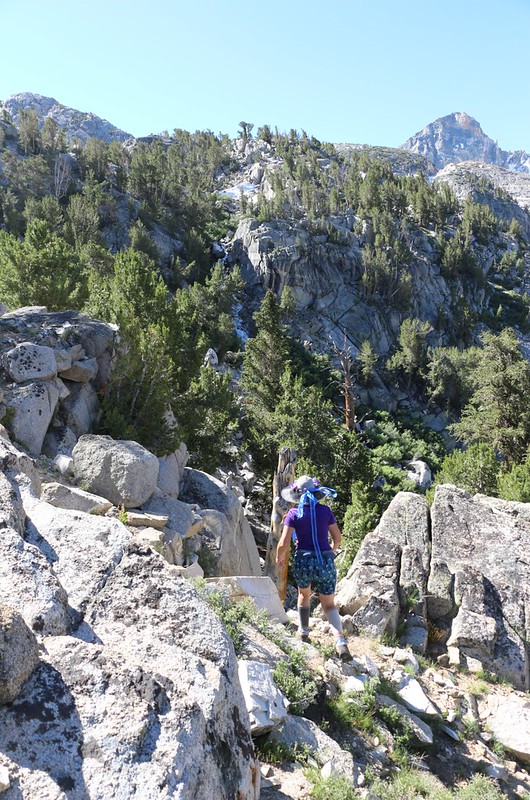 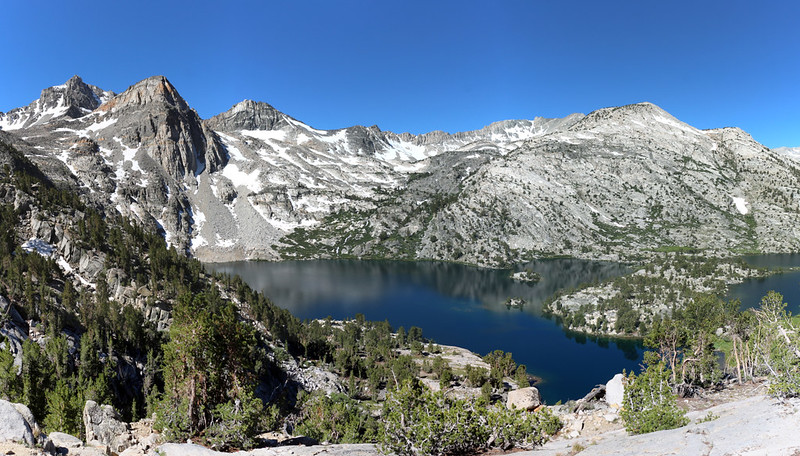 Upper Rae Lake from the Dragon Lake Trail, with Painted Lady and Glen Pass on the left

We arrived at Dragon Lake and took in the sights.  It was situated in a rocky dell, overlooked by Dragon Peak.  Somewhere up there was Dragon Pass, which would take us directly back toward Onion Valley if we really wanted to climb it.  Which we didn’t.  Instead, we checked out some really nice campsites, which looked like they rarely got used by anyone.  And there were plenty of big trout swimming along the shore.  A great spot to enjoy a secluded fishing trip.  We took a bunch of photos and walked over to check out the outflow stream.  It was running strong, from all of the snow still melting up above near the Sierra Crest.  Then we ate some lunch and took a good long break in the sun. 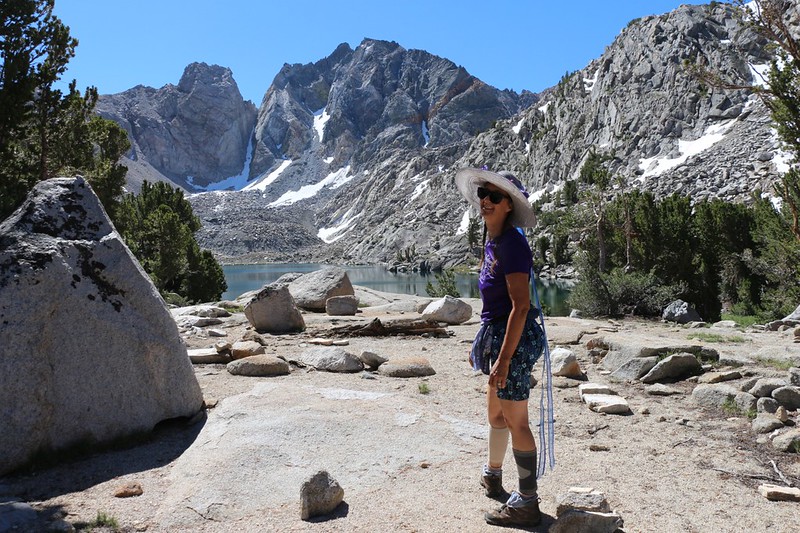 Vicki is happy to have made it to Dragon Lake, where there were nice campsites with views of Dragon Peak 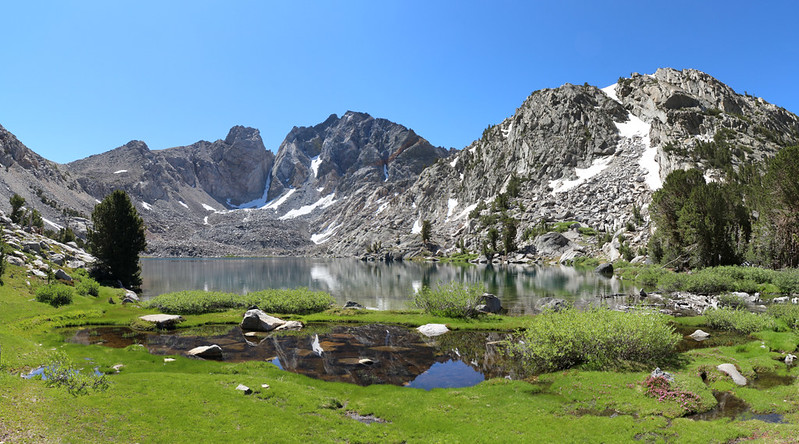 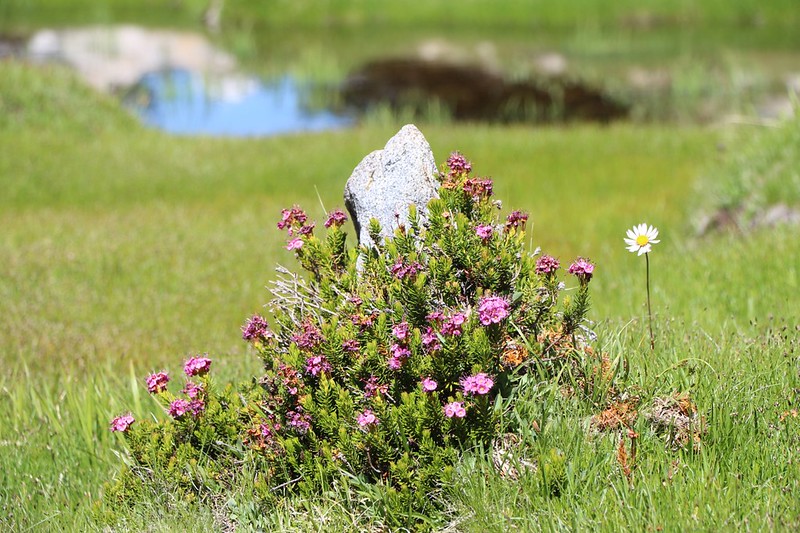 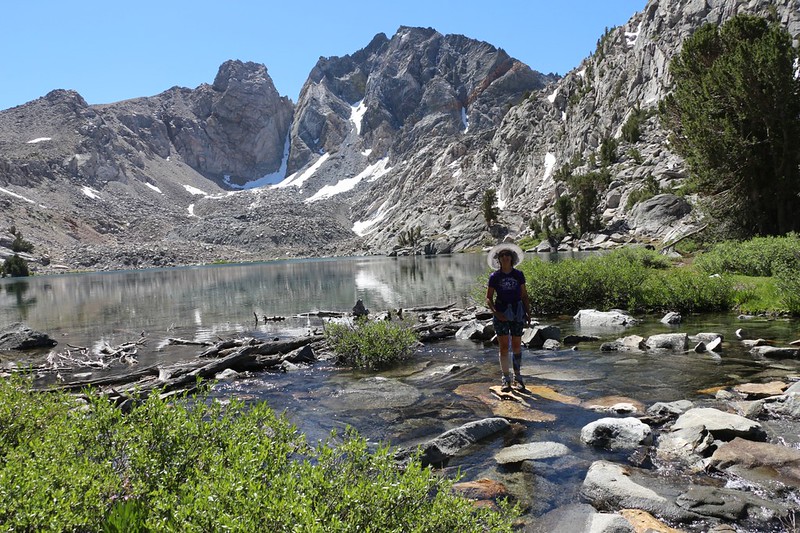 Soon enough, it was time to head back to camp.  Not surprisingly, we didn’t meet a soul on the way down.  And at least this time we figured out how to stay on the true trail, only getting off-track once or twice, and only for a moment or two.  We made good time heading downhill, and soon we were back on the PCT.  Vicki made a small cairn of rocks to mark the location of the Dragon Lake Trail junction, and then we hiked on back to the stream crossing.  This time, Vicki decided not to wear the waterproof socks, and was immediately sorry.  That water was cold! 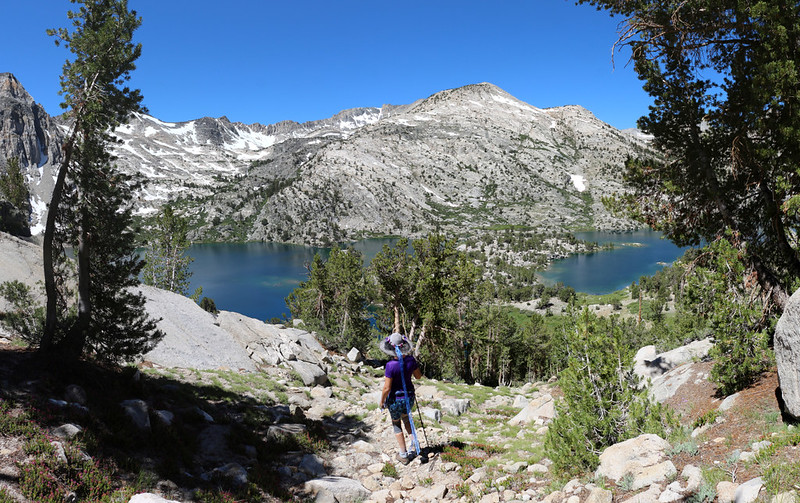 We headed back down the Dragon Lake Trail, with the Rae Lakes Basin below us 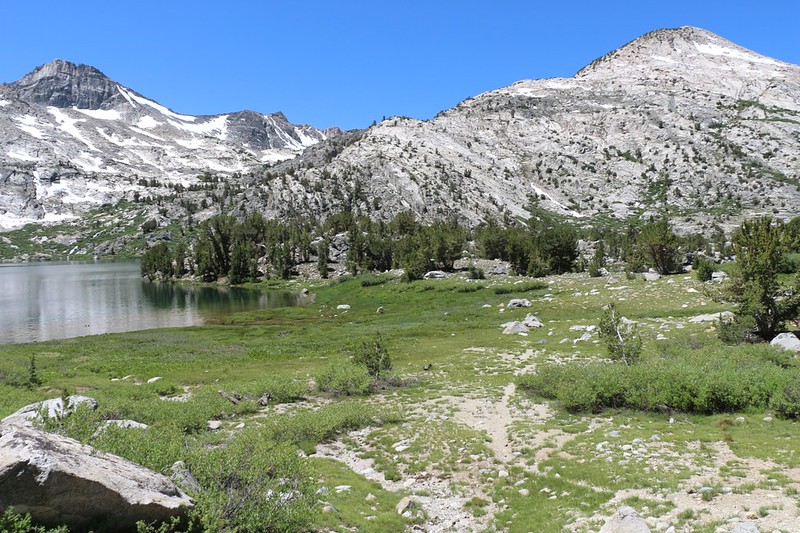 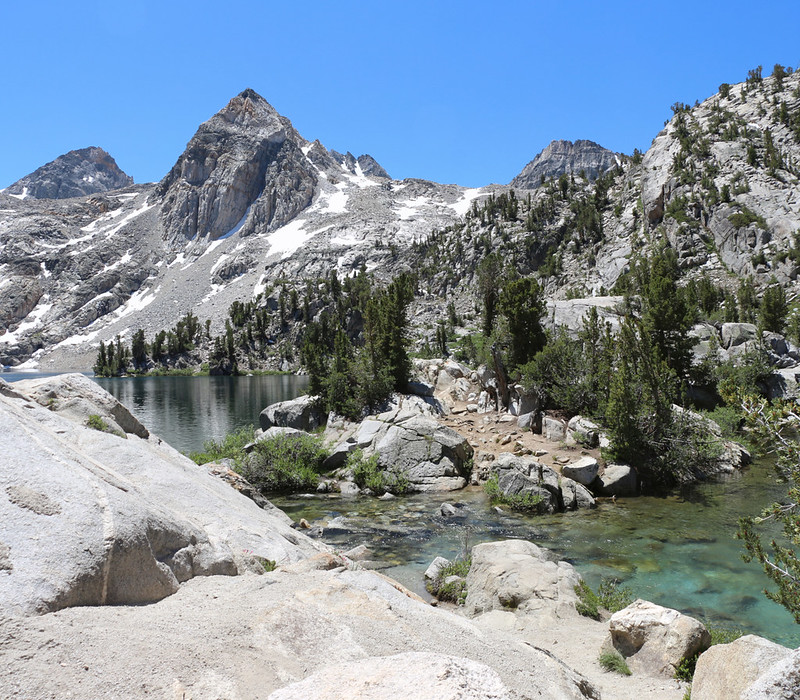 It was hot and sunny when we got back to camp, so we took the gear out of the tent and carried it over to the shade.  Then we took down the tent and rolled it up.  We got our big packs ready.  We topped up our water and made a final tour of the campsite, to make sure it was in perfect “Leave No Trace” condition. 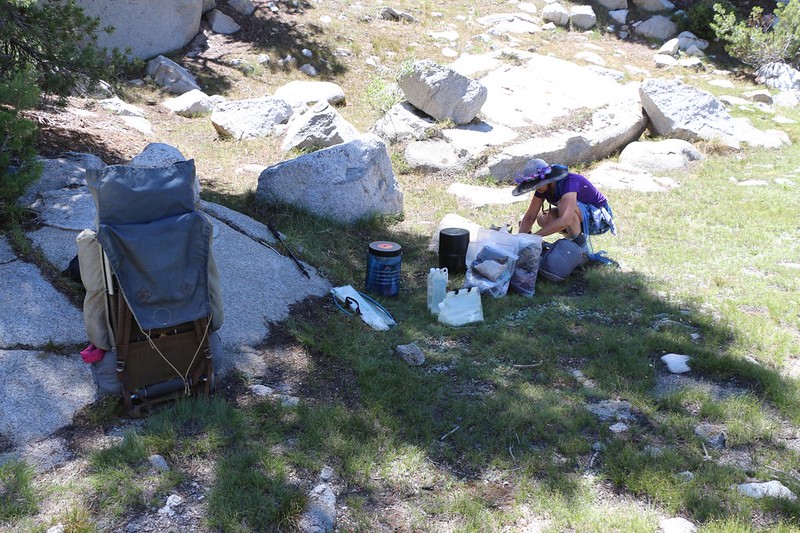 After that, it was time to head back to Glen Pass.  We didn’t have very far to go, but it was still going to be 800 feet of climbing, so Vicki got her head wet down by the lake, in order to stay cool.  We hiked back to the Sixty Lakes Trail, then continued south on the Pacific Crest Trail.  After following the shore for a bit, the trail began climbing in earnest.  We stopped often for short breaks, to catch our breath in the shade of pine trees, and also faced back downhill to check out the views of the Rae Lakes. 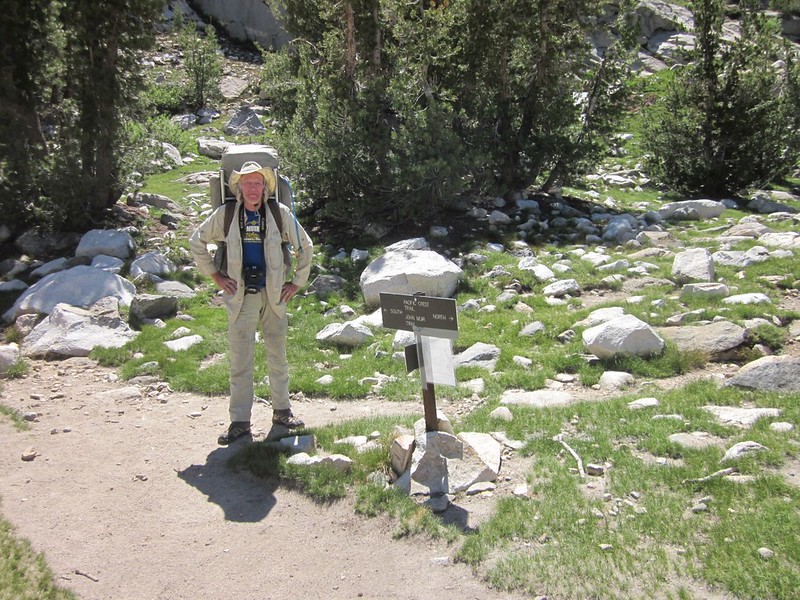 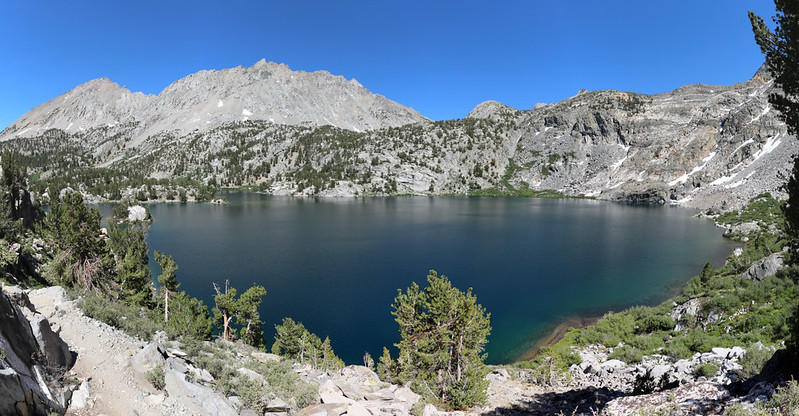 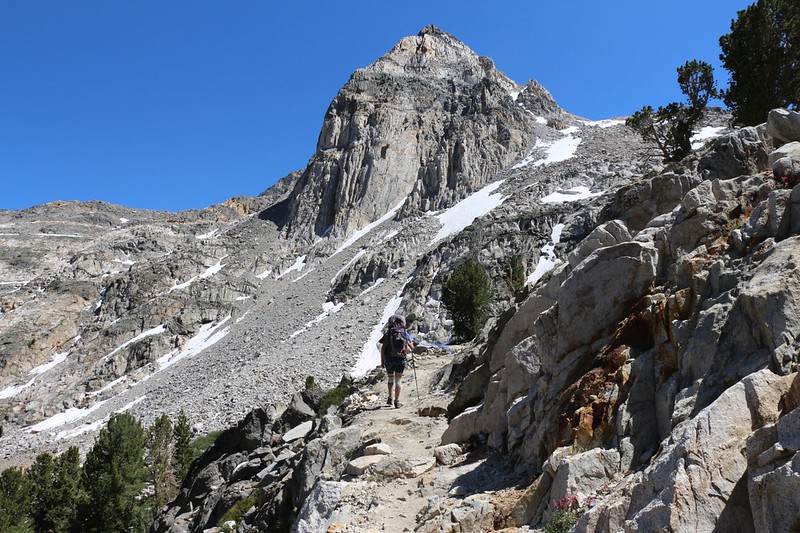 Eventually, the trail followed a valley around a corner and left the lake far behind.  Soon, we began to see snowdrifts and hear the roaring sound of meltwater in the creek.  The trail was buried in spots, and we had to climb over the snow, which was mushy this late in the afternoon.  It wasn’t very dangerous, but we still used our hiking sticks for balance. 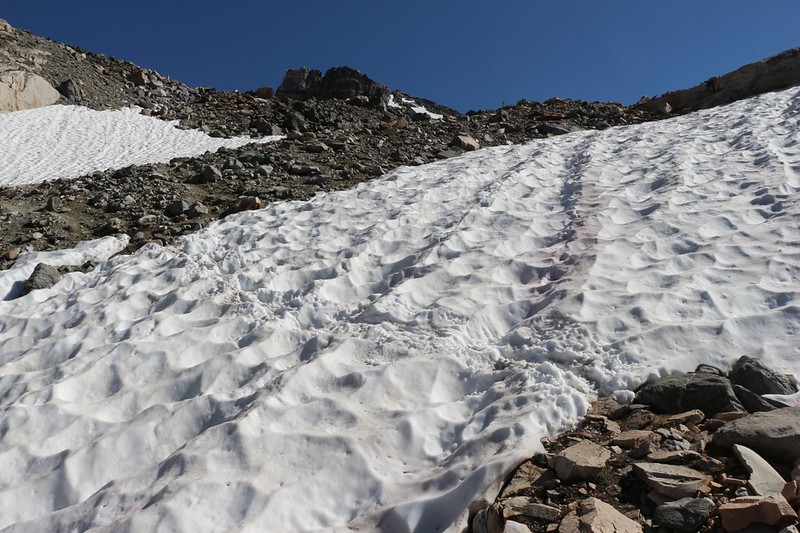 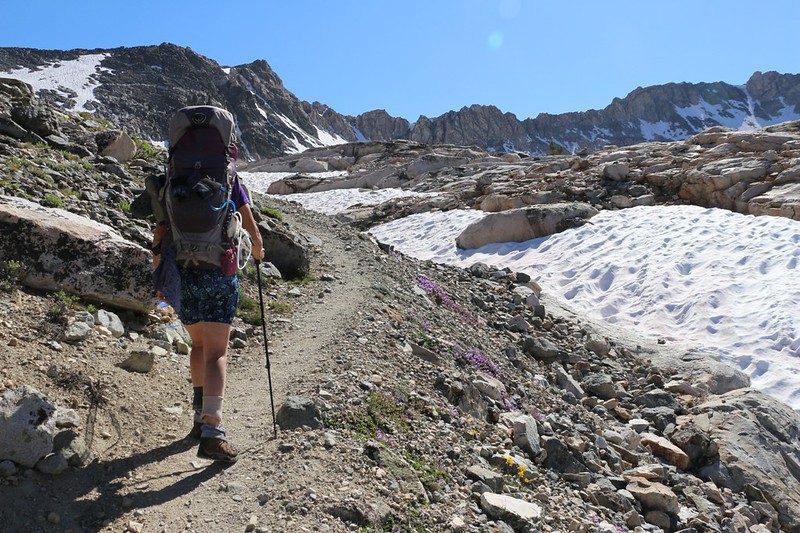 Our plan was to camp on that low ridge to the right, and wake up early to climb Glen Pass in the morning

We ended up remembering the correct spot to cross the snow and climb up on a flat-topped ridge, where we searched for a short time until we found a nice spot for our tent.  It was late afternoon by then, so we set up the tent right away.  Vicki found a good spot to cook dinner out of the wind, and I headed down to one of the small, unnamed lakes in order to filter two gallons of water.  We needed enough for dinner, and also to get us up and over the pass in the morning.  We ate dinner while enjoying a fine view in every direction, with the Rae Lakes down below and snowy Glen Pass looming high above us.  We were extremely pleased with this choice of campsite.

Our tent and campsite on the north side of Glen Pass, looking north toward Diamond Peak and Black Mountain 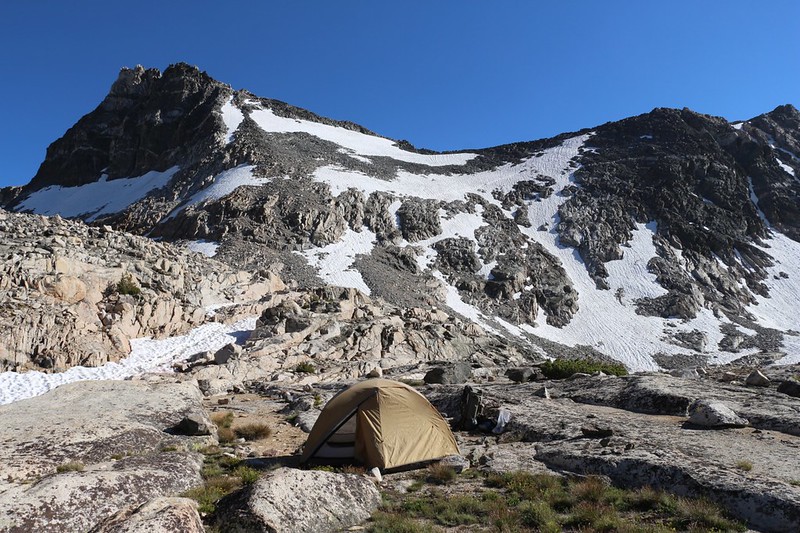 Our tent and campsite at 11300 feet elevation, just to the north of Glen Pass – yes, that is Glen Pass, center

GoPro panorama video from our campsite

The sun set early for us, as we were down in a valley, even though the sky and surrounding peaks were still lit.  But it had the immediate effect of cooling the air significantly.  We decided to head for the tent as soon as dinner was finished and all the cooking gear was put away.  Part of our plan was to wake up super-early tomorrow, at 3am, in order to begin climbing up and over Glen Pass before dawn.  So I set my alarm and we went to sleep before sunset.  All in all, it had been a fun day, and we were really looking forward to a long hiking day tomorrow.