This day was meant to be fun.  It was our lay-over day, meaning that we’d be camping in the same spot tonight, so we could leave the tent and the big backpacks, and simply hike out and explore the area to our heart’s content.  But at the same time, we had a vague plan:  To hike up and over into the Sixty Lakes Basin.  I’d heard that it was much less traveled than the Rae Lakes area, but was similarly beautiful.  So we wanted to check it out.  The original plan had been to backpack there, and spend the night deep in the basin.  The next day, we would make it a cross-country loop by fording Woods Creek near Arrowhead Lake and heading back south on the PCT.  But that plan was dashed by the big snows this season, because many creeks were still running dangerously high.  So we changed it to a lay-over day.

We woke up early, well-rested from the easy day yesterday, and I took a bunch of alpenglow reflection photos in the still air of dawn.  We ate breakfast while watching the sun light up the nearby peaks.  Very peaceful. 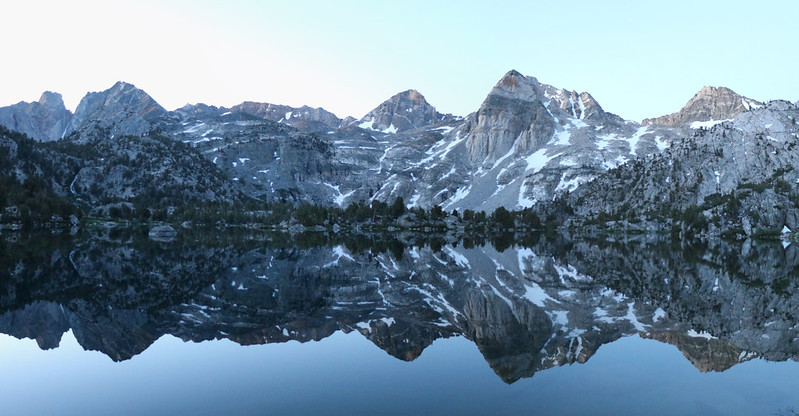 Dawn alpenglow reflection over the Rae Lakes, with Painted Lady right of center

Looking north, with Fin Dome on the left 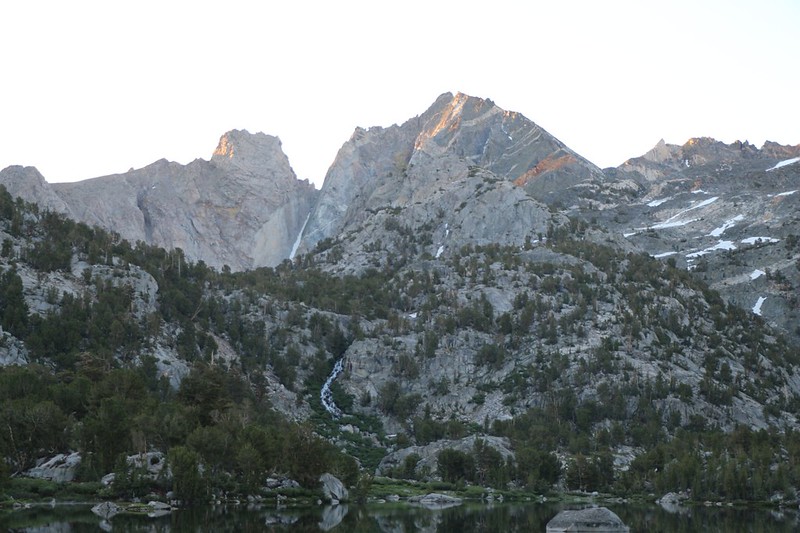 The first sunlight of dawn on Dragon Peak above lower Rae Lake, with a waterfall pouring down

After that, we got dressed for the day’s hiking, and put some essentials in Vicki’s pack, which I would carry.  We hid the bear cans under some big boulders so they’d stay in the shade all day, and left any other gear zipped inside the tent.  Then we headed south, cross-country, until we met with the Sixty Lakes Trail.  We hung a right and began climbing.  It was about 800 feet uphill over a bit more than a mile until we reached the pass.  Along the way, we had great views down into the Rae Lakes Basin.  I got out the PeakFinder app on my phone and we put names to all the peaks around us. 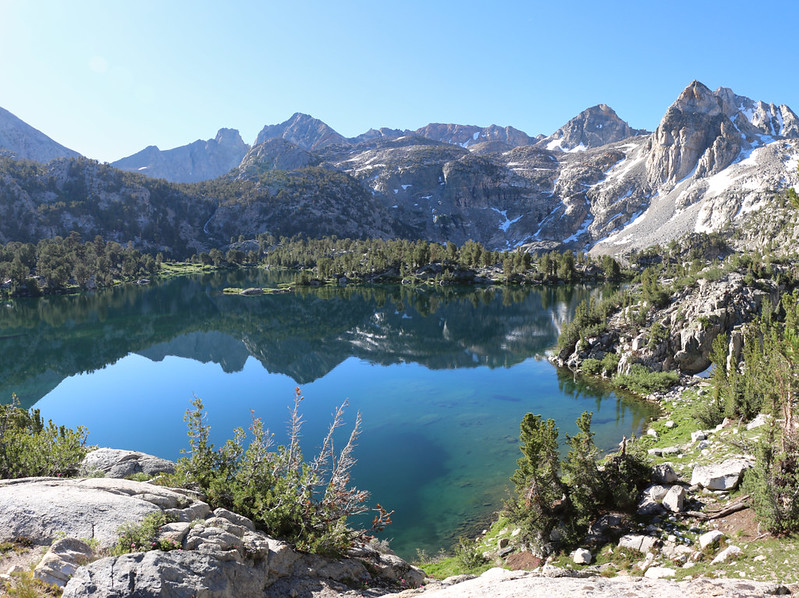 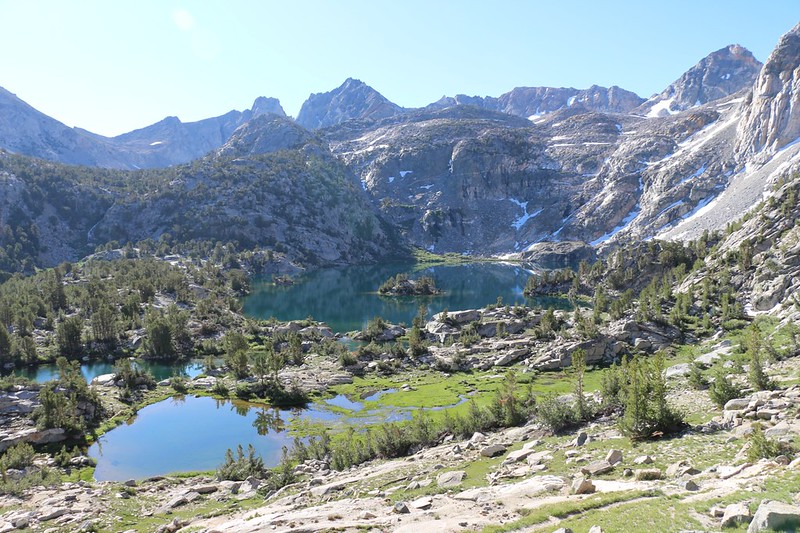 View looking out over Upper Rae Lake as we began climbing 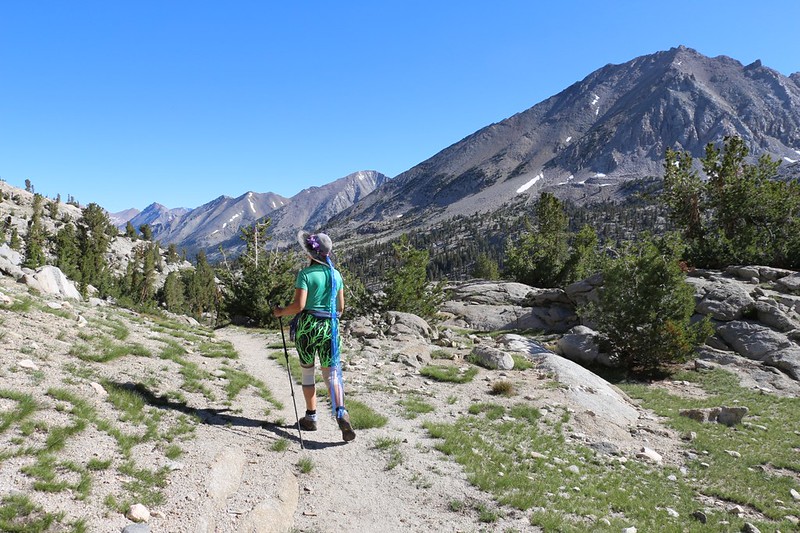 It was another beautiful Summer day in the High Sierra as we day-hiked up the trail, with Diamond Peak on the right

Black Mountain and Dragon Peak over the Rae Lakes Basin

We came upon a beautiful lake up at 11,200 feet elevation, near the summit/pass of the Sixty Lakes Trail.  We really liked this lake, and I took way too many panorama photos of it, from many different angles.  This was another high lake that had only recently finished thawing out from Winter.  The water was still icy cold.

Panorama view of the high lake near the pass

We climbed up and over the pass above the lake and took in the views to the west, down into the Sixty Lakes Basin.  To the left was the highest lake, Lake 11001, and its waters drained northward to the right, down into the basin.  We couldn’t see all of the Sixty Lakes from here, of course.  Even after looking at the map, I’m still not sure why they called it that.  But there were at least thirty, which is still impressive.  It all depends on your definition of “lake,” I suppose.

Across the way on the rim of the basin were a number of named peaks, and once again my phone app proved quite useful.  Some of them I’d heard of before, like Mount Clarence-King, which was the name of the 7.5 minute series USGS Topographic Quadrangle that we were undoubtedly standing in.  These “quadrangles” were paper maps that people used to order from the government and carry with them, or buy at a camping store, long ago in the days before GPS receivers and easy-to-read glossy waterproof maps were available.  And, no, I’m not calling those the good old days.  It was too easy to get lost back then!  I like knowing where I am, thank you, and I’ll leave the compass buried in my pack, for emergencies only, if you don’t mind. 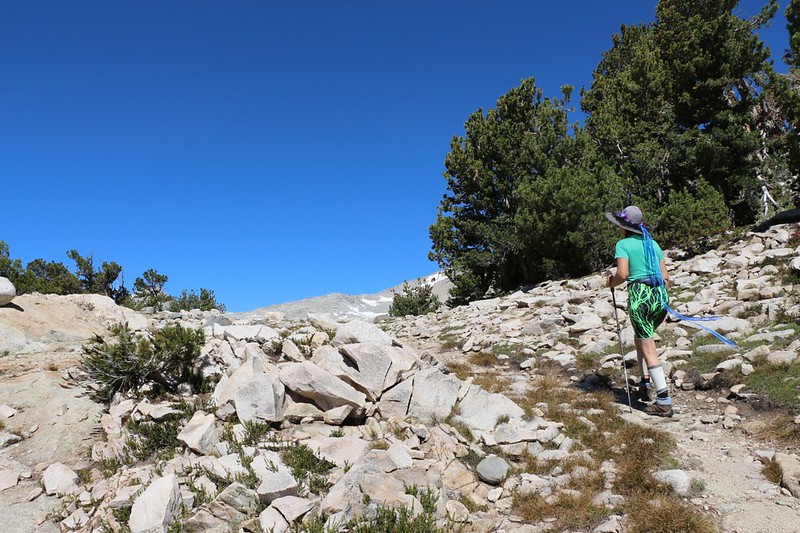 View over the basin with Mounts Gardiner, Cotter, and Clarence King on the horizon 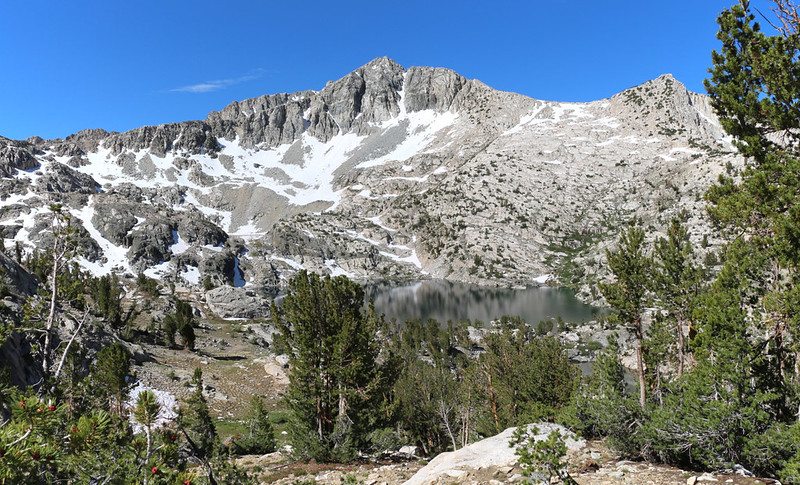 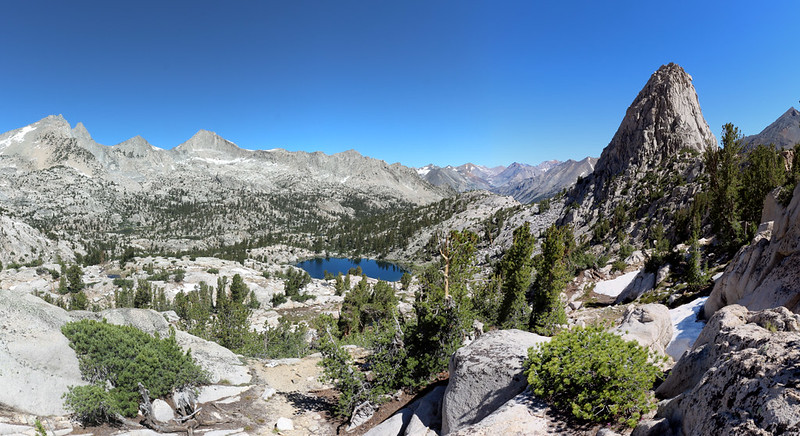 Panorama view looking down into the Sixty Lakes Basin, with Fin Dome on the right

Vicki took a good look at the basin and realized that if she hiked down into it, she’d have to hike back uphill to get out of it, and she’s not a fan of the word UP.  And besides, the best part of the hike is always the view from the top.  So we reconsidered our plan for the day.  We looked around, and there was Fin Dome, not far down the ridge from us.  We knew we couldn’t climb it (not without ropes and skill) but staying up on the ridge might be fun.  We could search for better views and explore a rarely visited section of the park.  So we left the trail and headed north on the ridge. 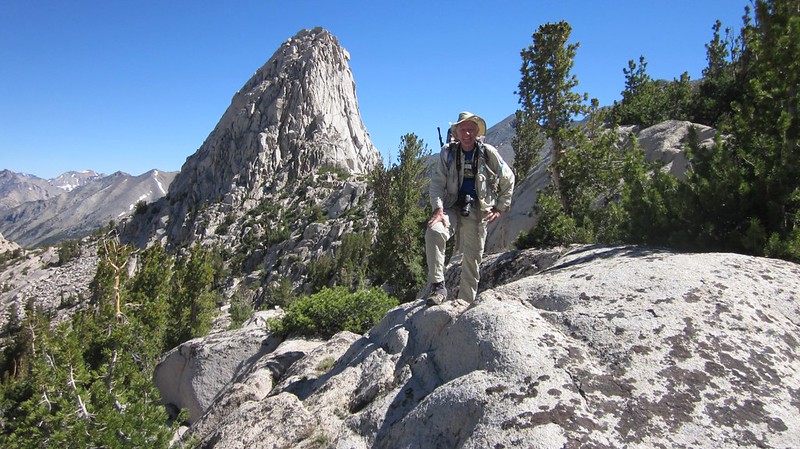 Me, posing with Fin Dome

Panorama video looking out over the 60 Lakes Basin

Panorama shot of the 60 Lakes Basin, Fin Dome, and Vicki in her wild shorts

We scrambled along the ridgeline, which was quite a challenge due to the vegetation and large granite boulders, and got views to the east as well as to the west, depending upon where the terrain sent us.  To the west was the Sixty Lakes Basin, of course, and to the east was yet another high pond, or tarn, that was shallow and clear and cold.  We were up so high that we could even see Dragon Lake all the way across the Rae Lakes Basin.  We intended to hike up to see it tomorrow, so this was a sneak preview of sorts. 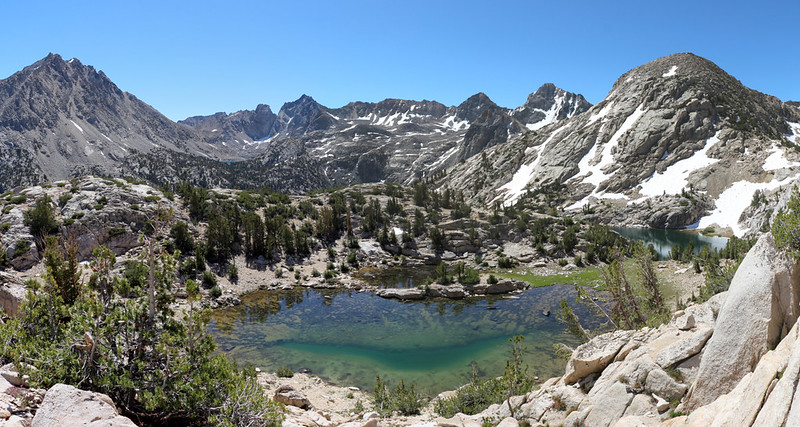 Panorama of the Smiling Lake from the ridge top, looking east 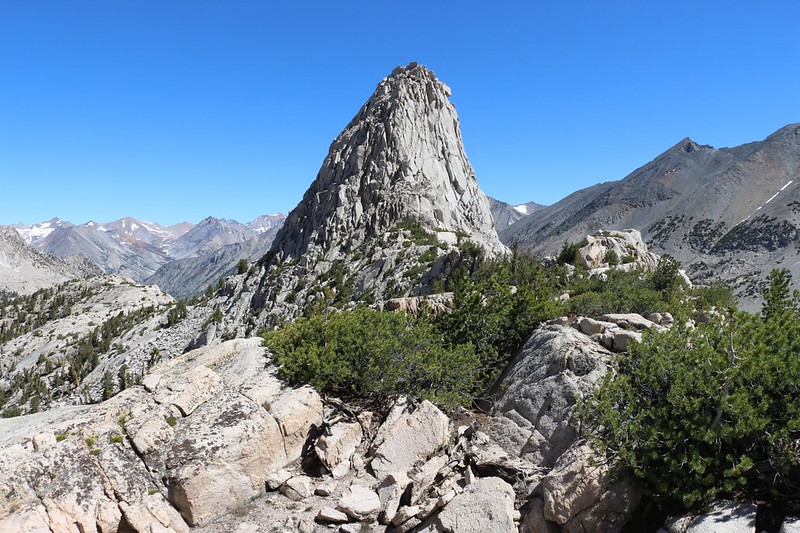 Fin Dome from its southern ridge 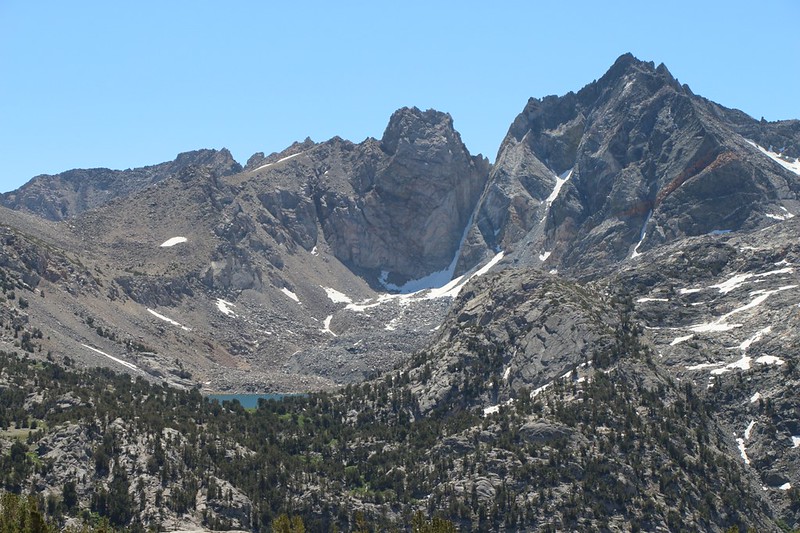 Zoomed-in view of Dragon Lake and Dragon Peak, all the way across the Rae Lakes Basin

Panorama shot of the Sixty Lakes Basin and Fin Dome 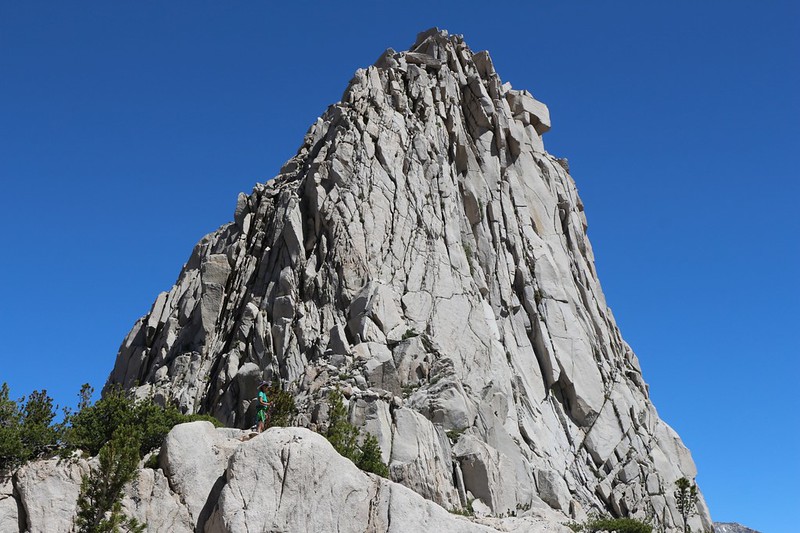 After getting as close as we reasonably could to Fin Dome, we took a couple of photos and headed back along the ridge to a big flat boulder with a view toward the east.  We took a break and ate some lunch in the sun.  Vicki took a short nap while I read my book.  Life was good.

The Sixty Lakes Trail is directly below us along the edge of the lake, and the Rae Lakes Basin is off in the distance

After that, we decided to climb down off the ridge and head east to the parallel ridge just across from us.  According to the map, we should be able to see Arrowhead Lake from there.  In my earlier plan, I had hoped to hike along the shore of that lake, so seeing it from a distance would be better than nothing.  It was an easy hike, and we were there in no time.  We took yet another break and checked out everything that we could see in the Rae Lakes Basin, including our campsite down below.  Let’s face it:  Climbing up mountains and taking in the awesome views is what backpacking in the High Sierra is all about. 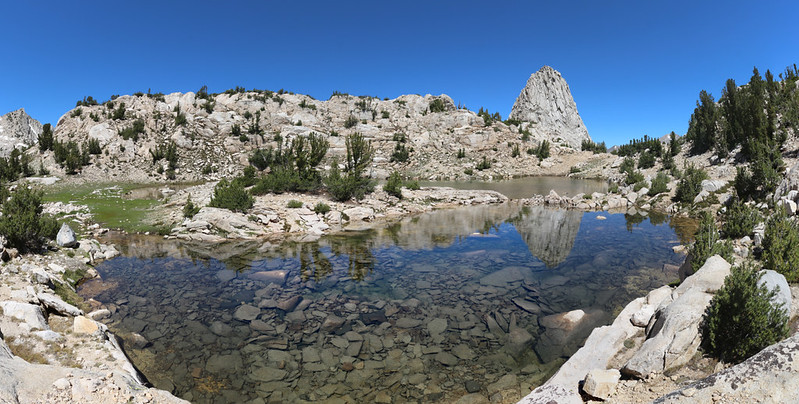 The south ridge of Fin Dome reflecting in a small tarn 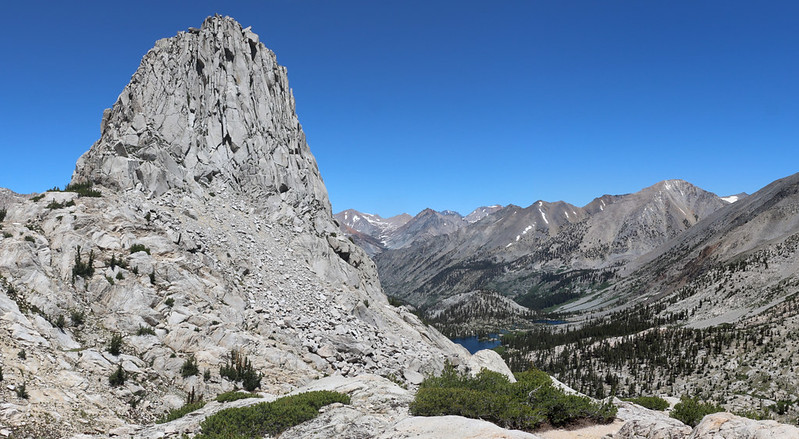 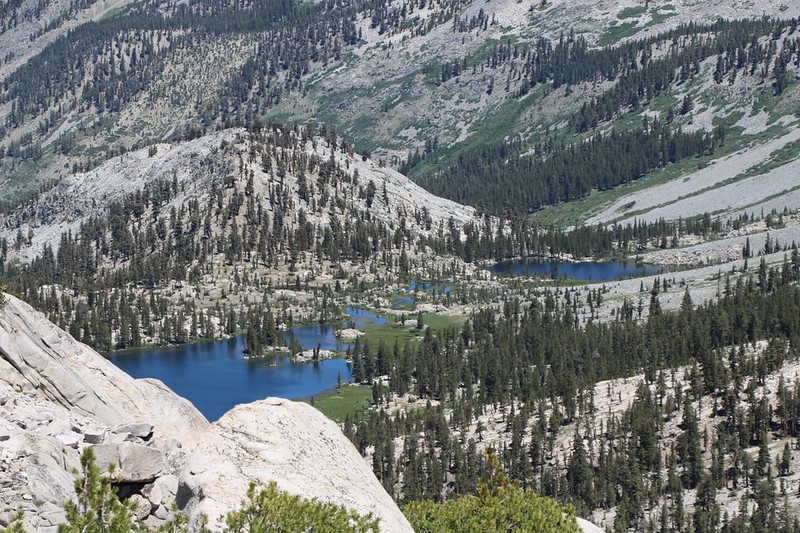 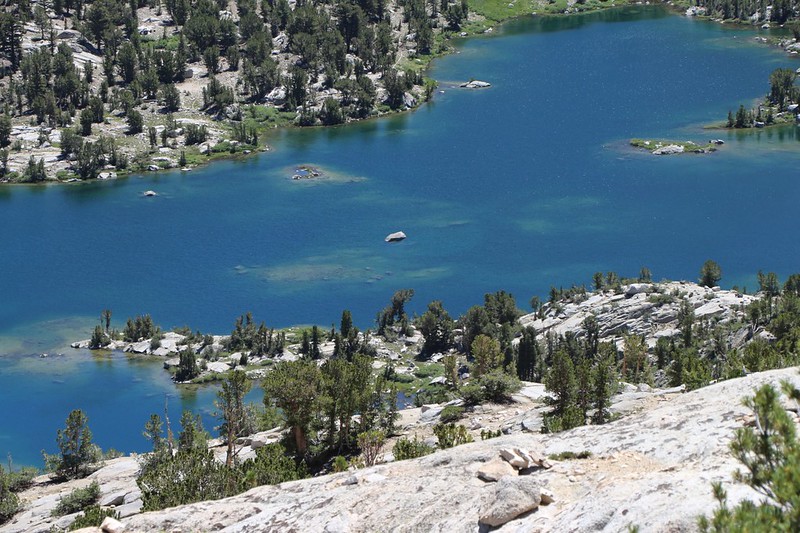 After that, it was time to head back down to camp.  Along the way we stopped at that beautiful high lake near the pass and Vicki thought about taking a dip, but changed her mind once the water reached her ankles.  It was icy cold!  So much for that idea.  Then we headed down the trail.  Along the way, there was a long sloping snow field, which Vicki insisted on glissading down.  And she did.  The snow had been turning pink as it melted over the last few months (Watermelon Snow) and after the slide down, her green pants were stained with pink.  We both laughed at that. 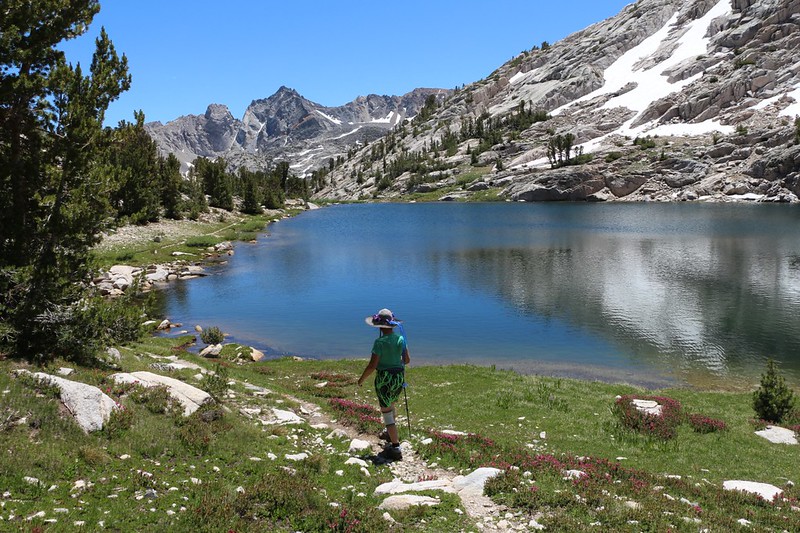 Hiking back toward Rae Lakes on the 60 Lakes Trail 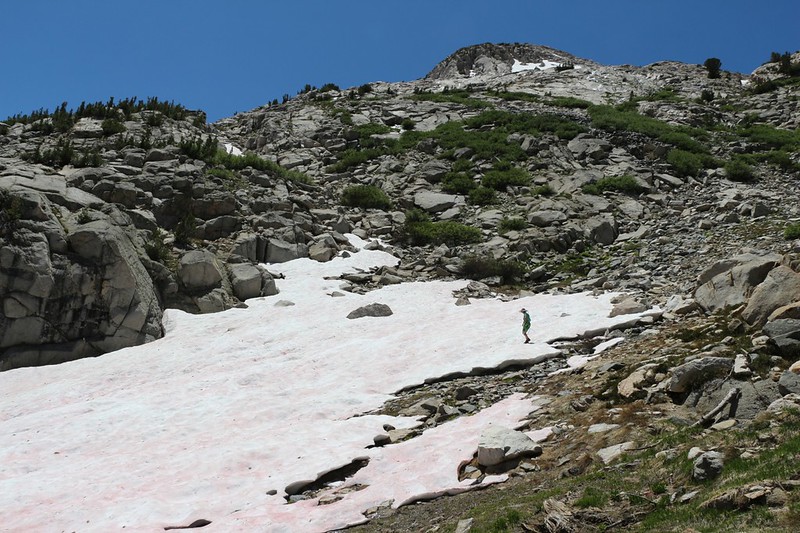 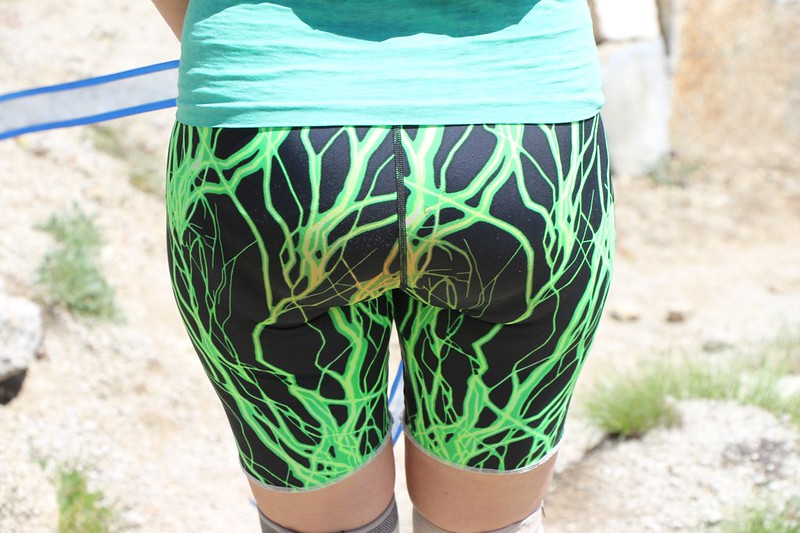 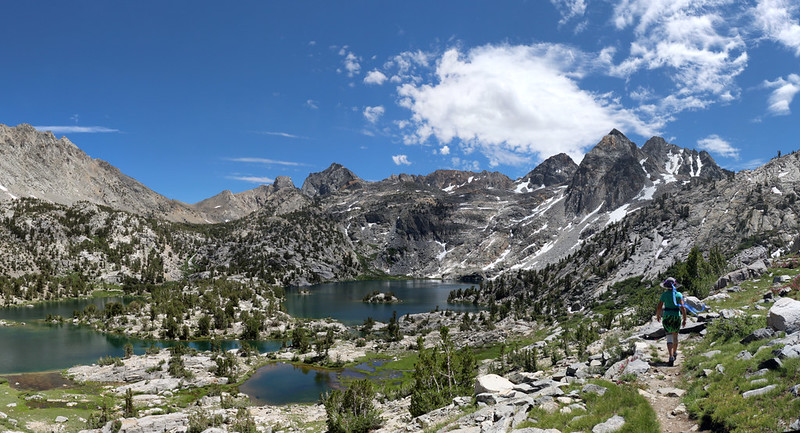 Hiking down toward Rae Lakes on the 60 Lakes Trail

It was still early when we got back down to the lake, so we headed south to check out the spot where the Pacific Crest Trail crosses the stream between upper and lower Rae Lakes.  On the topo map the upper lake is 10541 feet in elevation and the lower lake 10538, so there had to be a decent amount of flow.  We’d heard from other hikers that it was a knee-deep wade, and no big deal as the current was slow enough not to sweep you away.  And they turned out to be right.  After that, we weren’t worried about the crossing tomorrow morning, and we decided to bring the hiking poles and water shoes with us. 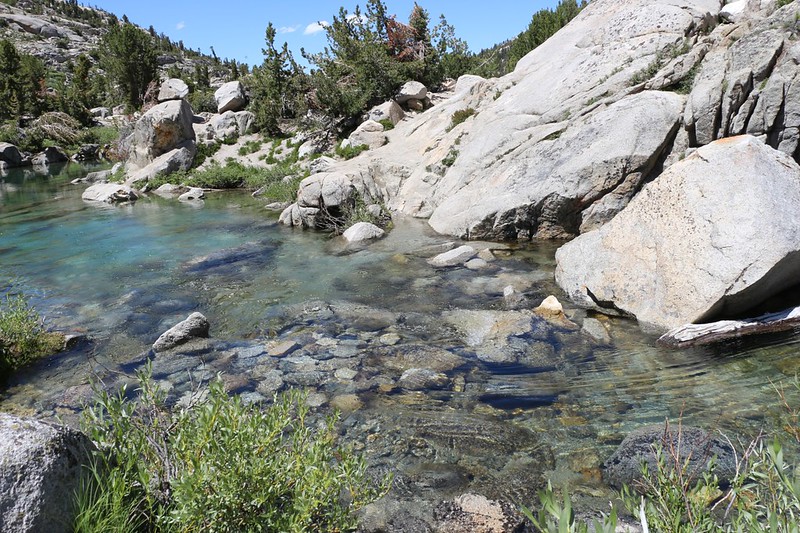 On the way to the campsite, we met some people who had just been swimming in the lake, which amazed us as it had to be cold.  And then when we got back to camp we saw two couples on the other side of the lake skinny-dipping and whooping out loud from the cold as they dove in.  It looked like fun, and the sun was still warm, so Vicki decided to try taking a dip once more.  And once again, she couldn’t do it.  The water really was cold.  I never even contemplated it; I’m a notorious wuss when it comes to cold water swimming. 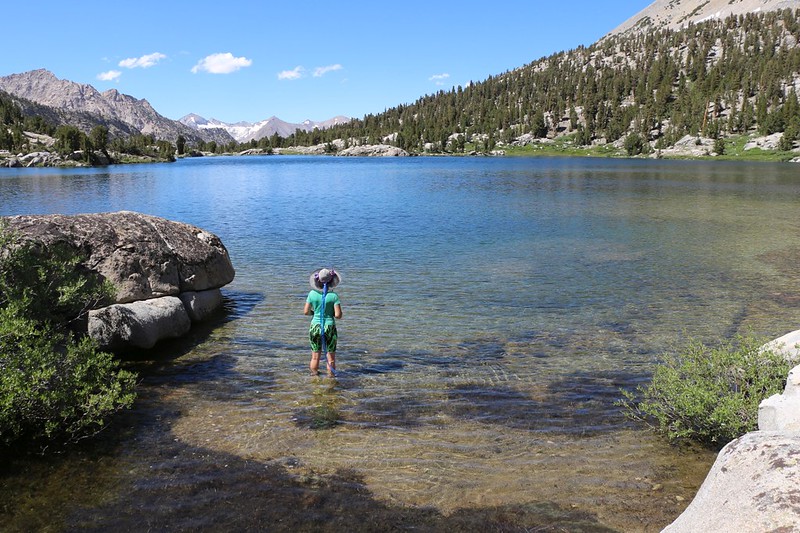 Back at camp on lower Rae Lake, Vicki thought she would take a dip in the water but it was too cold for her

This was our lay-over day, so we decided to do some laying over.  Vicki lay down in the tent and took a nap, while I lay down on a boulder in the sun and read my book.  It was a lazy time, and we were quite content with it being that way. 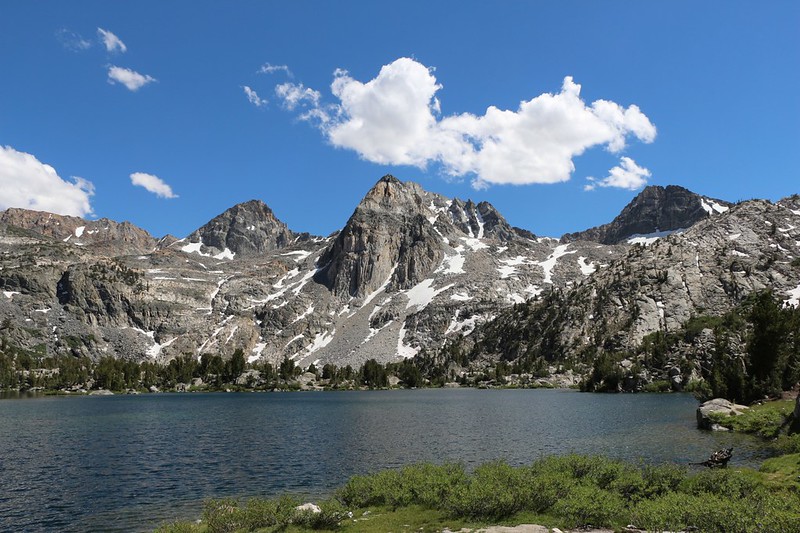 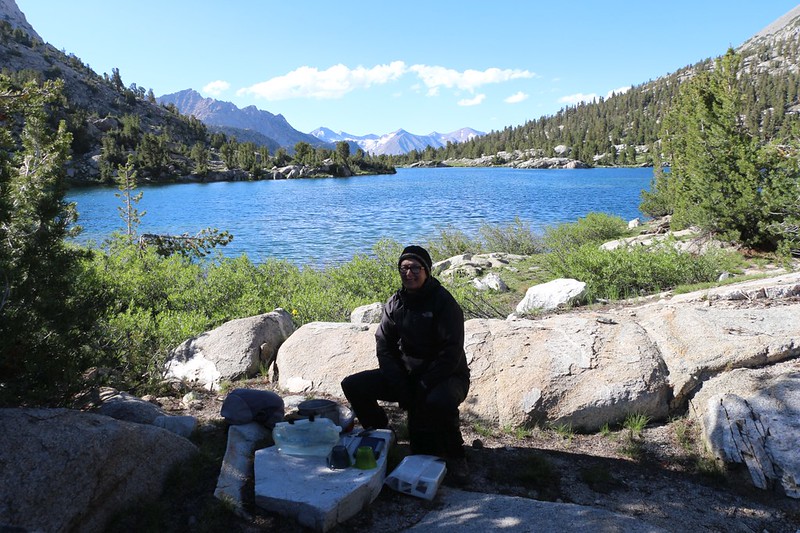 We ate dinner and took a short constitutional around the immediate area, but we didn’t go very far.  The air was cooling, and we sat down together, looking out over the lake.  The sun got lower and it’s final red rays lit up Dragon Peak and Painted Lady across the way.  There weren’t any clouds to make the sunset spectacular, but the lake and the mountains were enough all by themselves.  And it was a fine way to end a fun day. 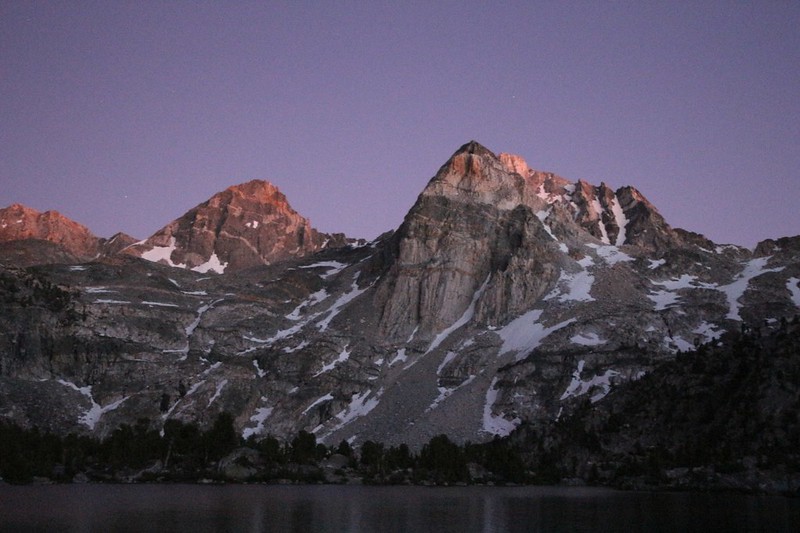