My son and I hiked from Onion Valley to the Kearsarge Lakes, crossing over Kearsarge Pass, as the first day of a seven day backpacking trek in the High Sierra.  Our plan was to hike 65 miles north via the Pacific Crest Trail / John Muir Trail and arrive at South Lake, west of Bishop.  Along the way we would cross over five high passes and check out many lakes and creeks.

But this wasn’t our original plan.  We initially wanted to hike further south on the PCT, and summit Whitney along the way.  The (in)famous California Wildfires of 2020 put an end to that idea.  There was smoke everywhere in the state, and the views from Whitney (the main reason for climbing it besides the bragging rights) would be ruined.  The big fire at the time was the SQF Complex Fire, down south in the Sierra National Forest, and even though it was too far away to be dangerous, it was barfing out tons of smoke.  I decided to make a quick change of plans and hike north from Onion Valley rather than south, mainly to avoid the smoke.  This trek was also on my radar for future hikes, and I knew that it was going to be beautiful, so why not do it now?

Unfortunately, the starting and ending trailheads were many miles apart.  In 2020, the year of the Covid-19 Pandemic, it wasn’t a great year to hitchhike, so we needed two cars, or else take a very expensive shuttle.  Luckily, my wife decided to help us out with her car.  We drove both cars up to Bishop and left my car on South Lake Road at the terminus of the hike.  Unfortunately, they were repaving the road and we had to park a few miles below the trailhead, but that was OK.  We’d just walk a bit further the last day. 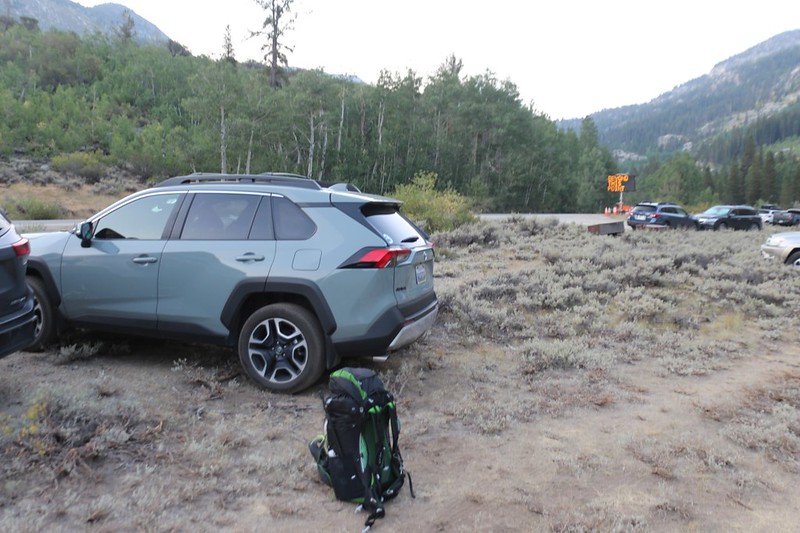 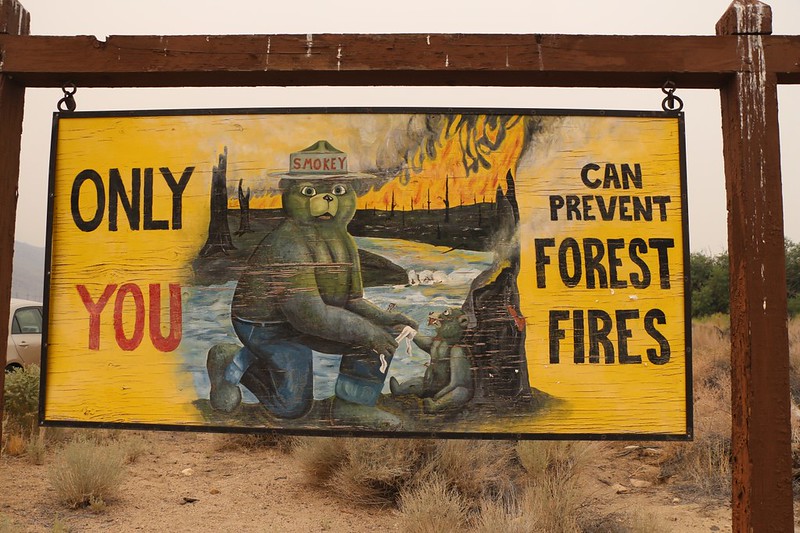 Old Smokey the Bear Sign on Highway 395 in Bishop, CA – and it was very smoky that day!

After such a long drive, the three of us spent the night near the parking area, and in the morning my wife drove  us south in her car to Onion Valley and the Kearsarge Pass trailhead.  We thanked her profusely, then shouldered our big backpacks and hiked on up the trail. 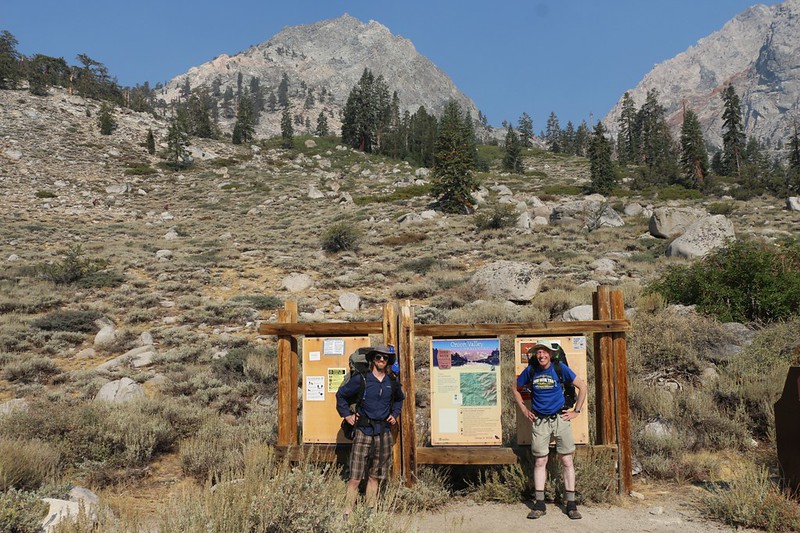 My son and I at the Kearsarge Pass Trailhead in Onion Valley – my wife dropped us off and headed home – Thanks!

There was still a lot of smoky haze throughout the Owens Valley, but it already looked clearer up at 9000 feet.  Yay!  We had a lot of climbing to do, and “the higher the better” seemed to be the rule of the day, smoke-wise.  So up we went.  It was a warm day, and I turned my cargo pants into shorts, which was very rare for me.  My son was glad that he was wearing sunglasses, as the glare off my fish-belly-white legs was blinding!  Sad but true.  And this was but a small sample of the dangers we all face when venturing forth into the wilderness. 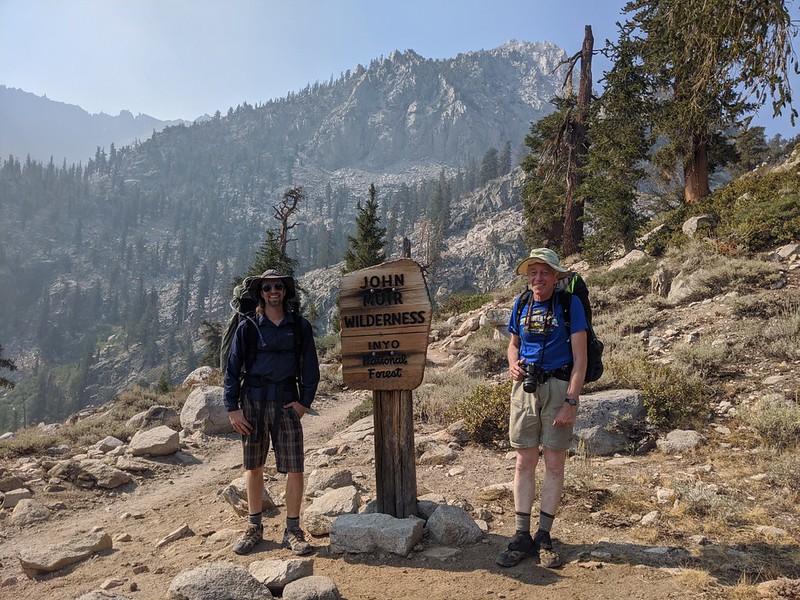 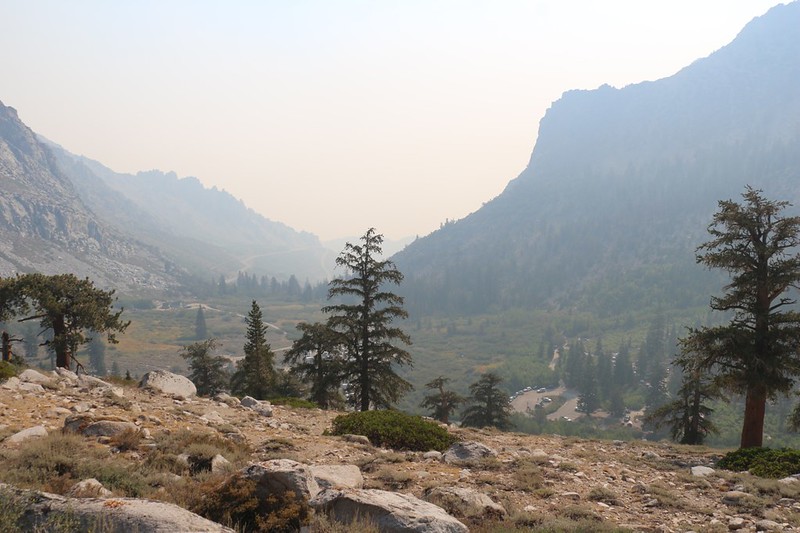 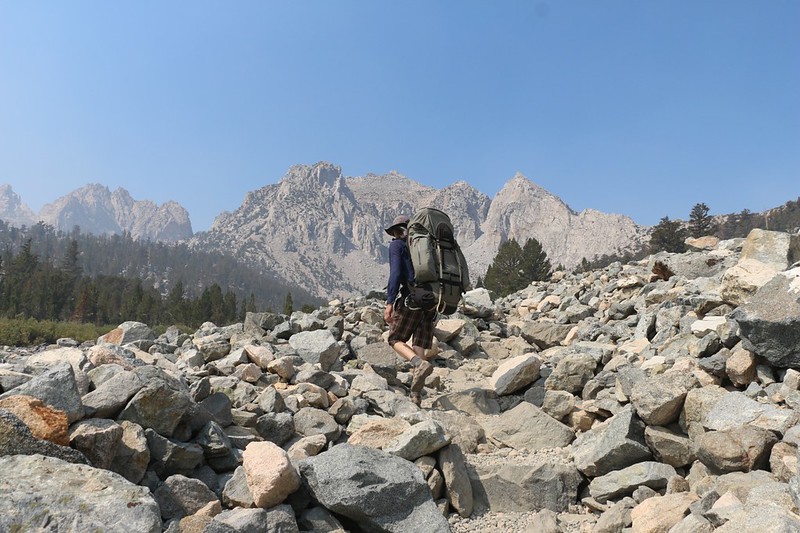 We were hiking strong, and we reached Flower Lake within two hours, after climbing 1600 feet and 2.5 miles.  On the way we passed by Little Pothole Lake and Gilbert Lake, but we didn’t pause at either for long.  Flower Lake was our first main break.  We got out some lunch and hung out in the shade near the shore.  Very peaceful.  Today was meant to be one of our shortest days on this seven-day trek, mainly to give us a chance to get acclimated, and also because it made good sense based on camping spots, views, and water supplies. 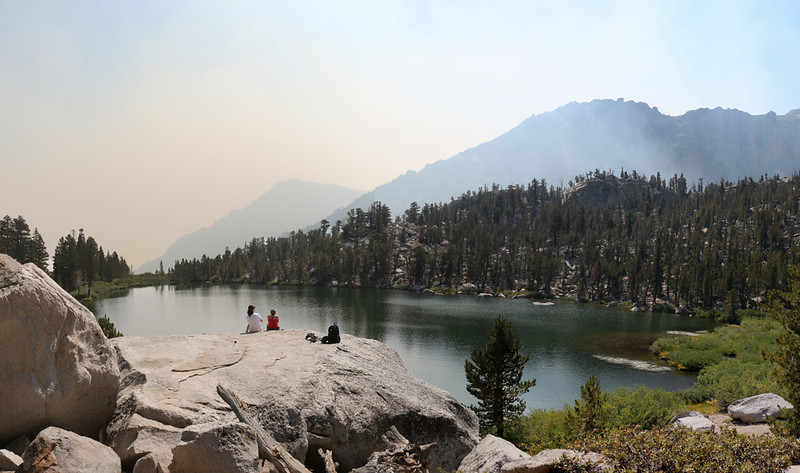 We took a lunch break at Flower Lake, with Mount Gould on the far right

The next big push was to climb up above the headwall at Heart Lake.  There were plenty of switchbacks on this section, and plenty of views.  There was still too much smoke in the air, but that was OK, as we’d both been there before under better conditions.  We knew that the beauty was still present under the deceptive haze. 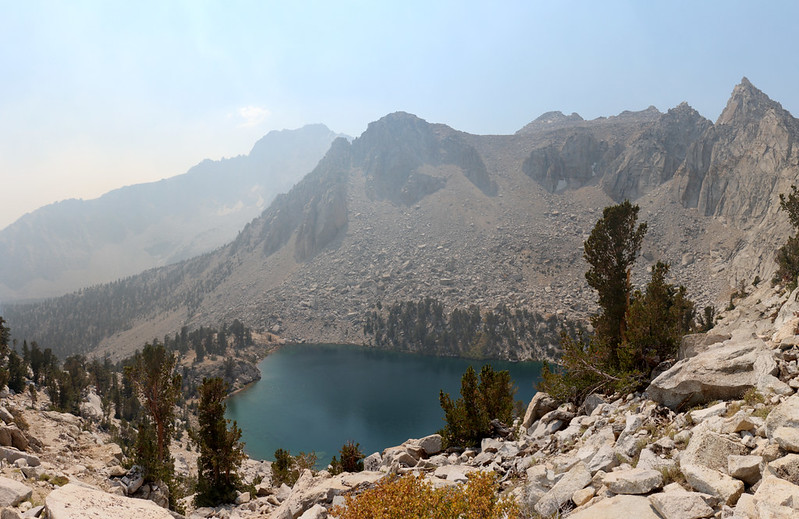 After the headwall was gained, Kearsarge Pass came into view.  This was the final push of our ascent, and there was no shade whatsoever.  It was hot.  The trail made long switchbacks as it climbed up the north side of the valley, and we trudged onward under the sun.  We took many short pauses along the way, ostensibly to look around at the view, but in truth we simply needed a break to breathe.  The high elevation was noticeable as we approached the pass, which topped out at 11,709 feet altitude. 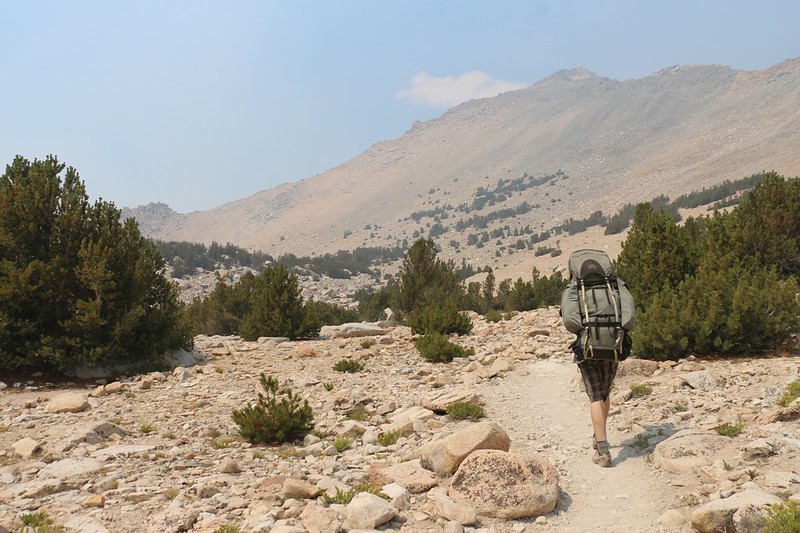 Kearsarge Pass came into view on the left, with Mount Gould on the right 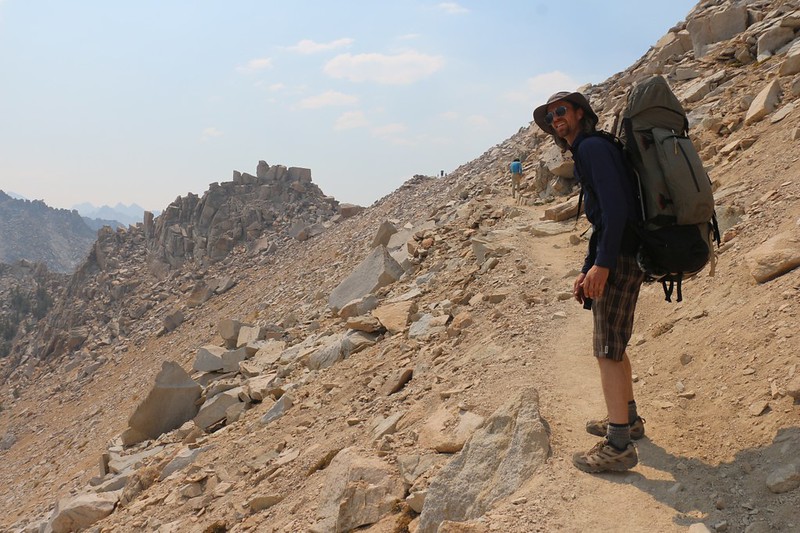 It was a long climb but, finally, Kearsarge Pass was just a short distance away

We joined a few other groups at the pass and took a long break.  Everybody stops for a rest up there, so it’s a great spot for gathering news of the trail and socializing with folks.  Some were backpackers and others only day-hikers.  At 4.5 miles and 2600 feet of climbing, Kearsarge Pass was a significant achievement for most folks.  Only the hardiest day-hikers continued onward from there, and we’d pretty much be meeting backpackers exclusively thereafter.

The big news of the day, of course, was the wildfires making all of this smoke.  I was insistent that the smoke was caused by the SQF Complex Fire to the south, while others hiking in from the north believed that it was due to the Creek Fire, far to our north, which had suddenly doubled in size during the previous day.  That fire hadn’t been all that large the last time I checked, two days ago, but I was still interested either way, as the two of us were bound northward.  From what we could tell, it was nearly a hundred miles away, and not a direct threat at the moment.  News has always traveled fast on the trail, but with the advent of satellite communication devices (I had one with me) the family at home could warn their loved ones of danger instantaneously, even out here in the middle of nowhere.  This was amazing, when compared with the bad old days of ignorance.  What a great world we live in, and it’s getting greater every day! 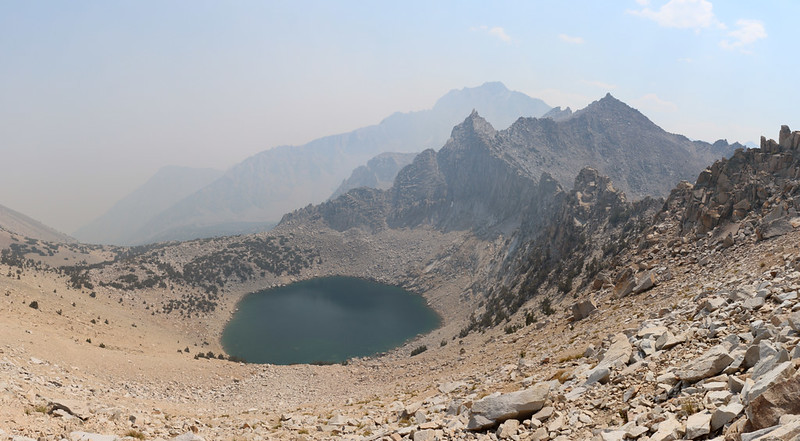 Looking back east from Kearsarge Pass, with Big Pothole Lake down below us – Goodbye Onion Valley! 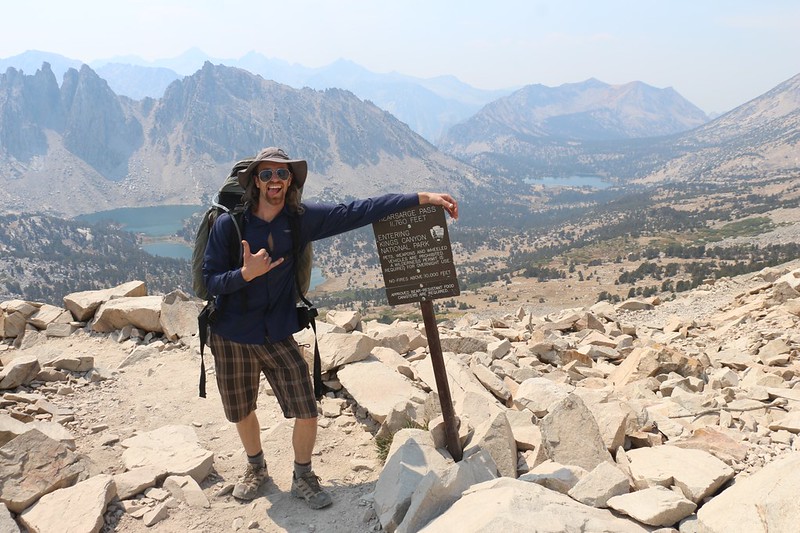 We made it to Kearsarge Pass, looking west into the Kearsarge Basin, with the Kings Canyon entry sign 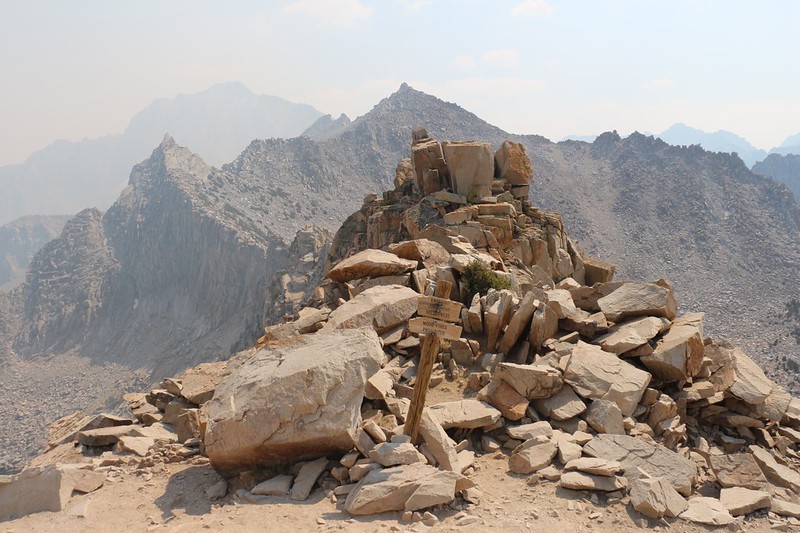 View south along the ridgeline at Kearsarge Pass, with the Inyo National Forest entry sign 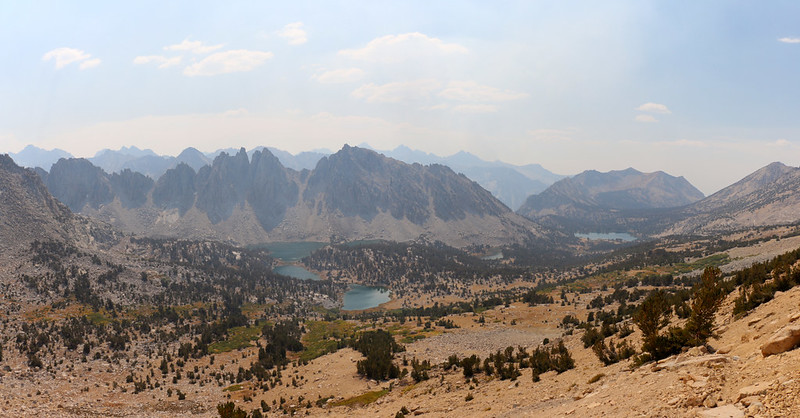 Eventually, of course, we had to head on down from the top.  Our goal for the day was the Kearsarge Lakes, about a thousand feet below us and only a mile and a half away.  It didn’t take us long to get there, and the hardest part was finding a good camping spot.  This was Labor Day Weekend, after all, and there were people everywhere.  But we had a few tricks up our sleeves, and soon we found a nice spot on the opposite shore from the main trail.  We set up our tent and filtered a couple of gallons of water.  This would be enough to get us through dinner, breakfast, and tomorrow’s hike. 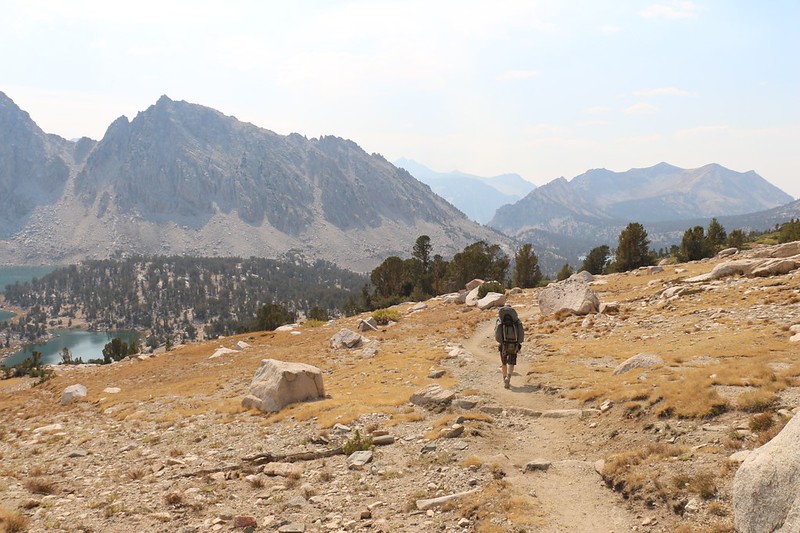 Hiking down the Kearsarge Lakes Trail 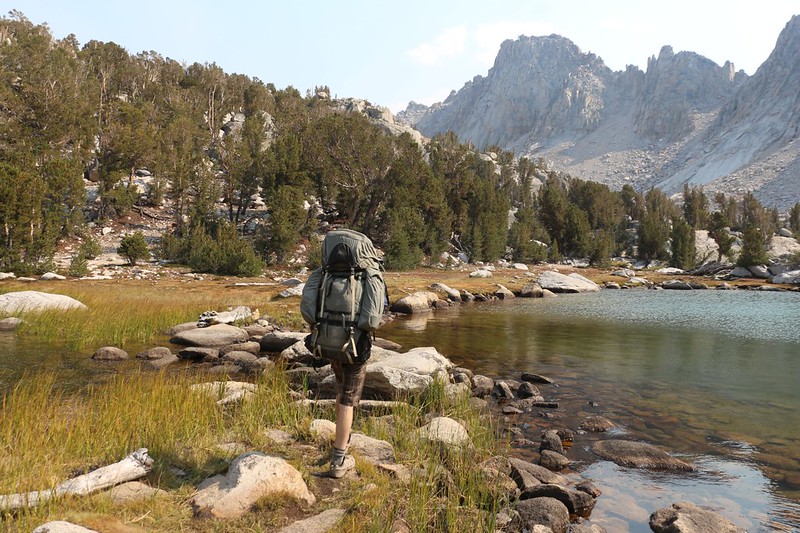 It was Labor Day Weekend, so it was crowded – we headed across to the opposite shore to camp 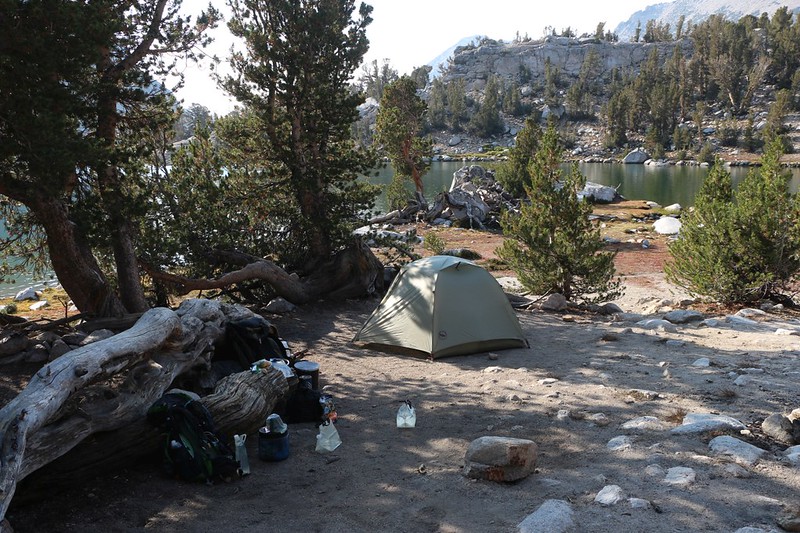 Our tent and campsite at Kearsarge Lakes

We ate some dinner and hung out around the campsite.  It was 2020, the year of Covid, so people were staying separate from one another.  We saw some younger folks skinny dipping off across the lake and thought that they were nuts – those lake are COLD at 11,000 feet in the High Sierra!  Brrr!  And then we hung out and watched the sunset and the changing light on the nearby peaks. 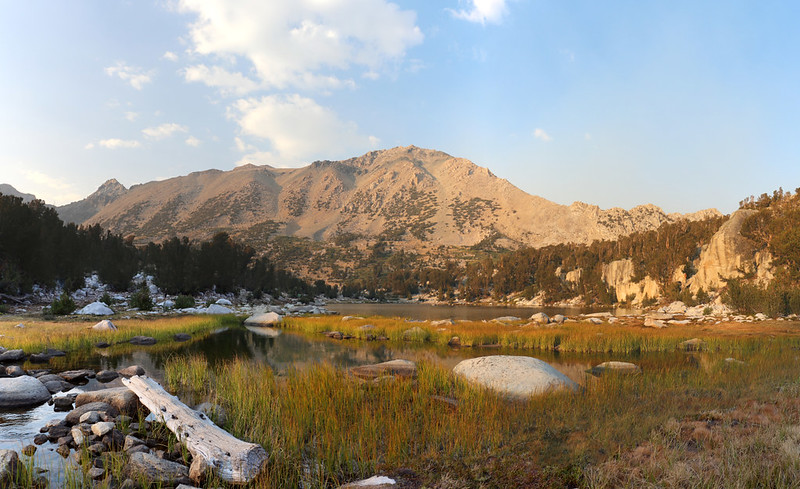 After that, it was time for bed.  Tomorrow was going to be another relatively easy day, but I was still hoping to get going early in the morning.  So we set an alarm and headed off to bed.  Maybe the smoke and haze would be better tomorrow.  We hoped.