This was our final day on the High Sierra Trail, as we hiked from Nine Mile Creek to Crescent Meadow, and returned to civilization after hiking over 70 miles, starting at Horseshoe Meadows on the east side of the Sierra Nevada.

We woke up at 3am and started getting packed right away.  We wanted to cover as many miles as possible before the sun came up and started roasting us.  We were ready to hike by 4:30am, and said good-bye to Nine Mile Creek with our headlamps on.  It was nice to know that our packs were much lighter now than when we started, as the only food we had left was a no-cook breakfast, a tortilla with peanut butter and jelly for lunch, and a bit of trail snack.  We had to make it back to the car today. 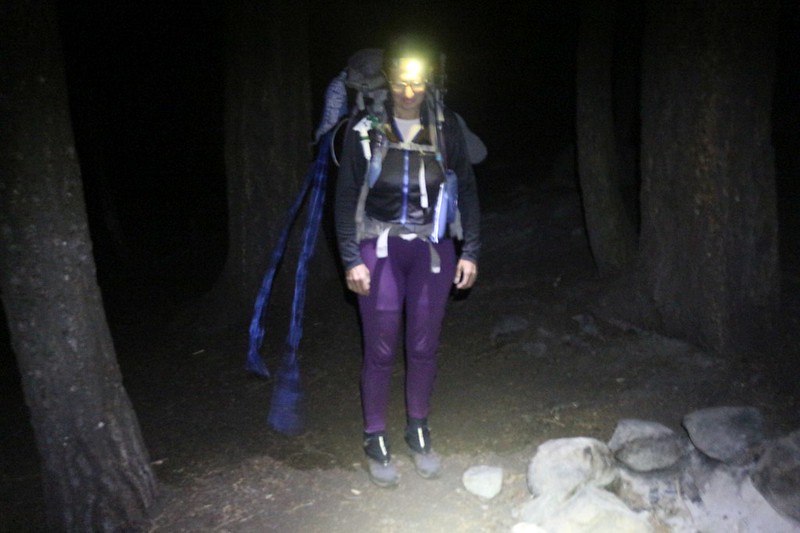 As soon as we came out of the tent that morning we smelled smoke in the air.  We wondered if one of those lightning strikes had started a fire nearby.  We couldn’t see anything (it was dark) and the smell was still fairly faint, so we knew we weren’t in the direct path of a fire.  There wasn’t much we could do about it anyway, so we started hiking in the dark.

It was quite peaceful on the trail at that hour.  No people, no distractions, just cool and quiet,  After an hour of steady hiking in the light of our headlamps, a faint light had begun to appear in the east as dawn approached, and we could tell that all of the nearby mountains were shrouded in haze. 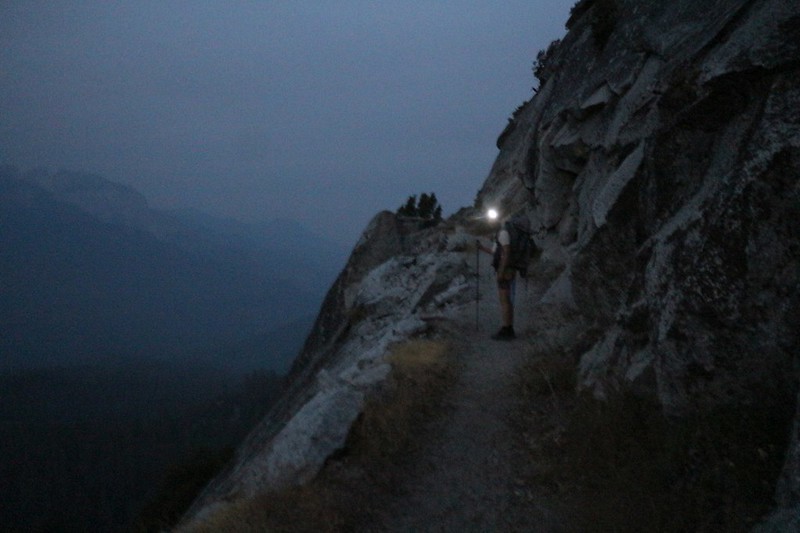 An hour later, we were still hiking in the early light of dawn, with a smoky haze over the area 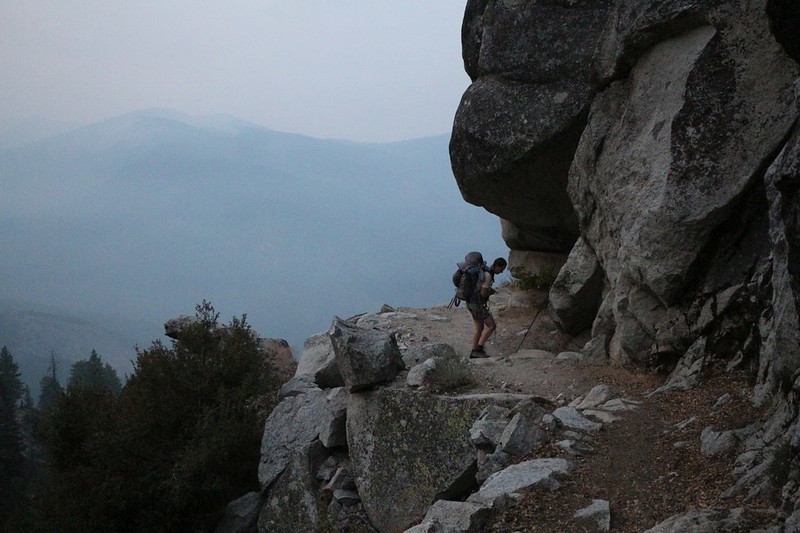 The California Wildfires of 2020 began four days earlier, and the smoke arrived on this final day of our 11-day trek

We didn’t realize it at the time, but this smoke was covering most of the state of California!  In fact, a lot of it was from the CZU Lightning Complex; it had drifted all the way from the coast in Santa Cruz.  But there were plenty of other fires to go around, and there was no shortage of smoke, either.  These fires had started the afternoon when we were camping down in Kern Canyon, at Funston Meadow.  They took a few days to really get going, it seemed.  But we knew nothing about any of that.  There was no news service in the backcountry, except what you heard through the grapevine from other hikers, and we hadn’t seen any yet this morning.  All I knew was that the sooner we got out of the forest the better, and that all of the beautiful views I remembered from hiking this section of trail back in 1997 were not going to happen for us today. 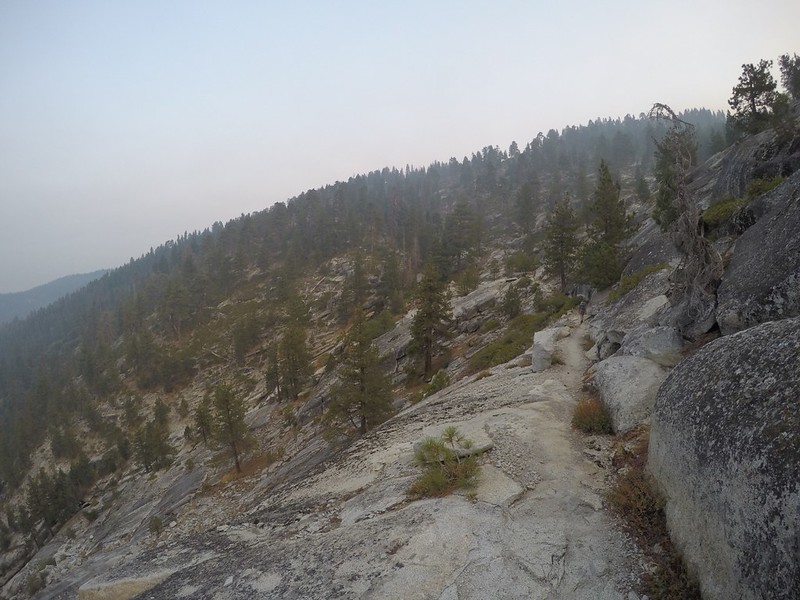 We arrived at Mehrten Creek on the High Sierra Trail by 7am – we were making great time!

We hiked quite well in the cool temperatures, and the trail was easy.  We said hello to the yoga couple as we passed Mehrten Creek; they were still in their tent and in no big rush to leave like we were.  We wished them well and hiked on.  Namaste!  An hour later we stopped for our first major break and took off our boots for a few minutes.  We ate some snack and looked out over the valley, which was filled with hazy smoke.  If this was what the conditions were going to be like, we were glad we were leaving the wilderness and heading home.  The views were one of the main reasons for being out here. 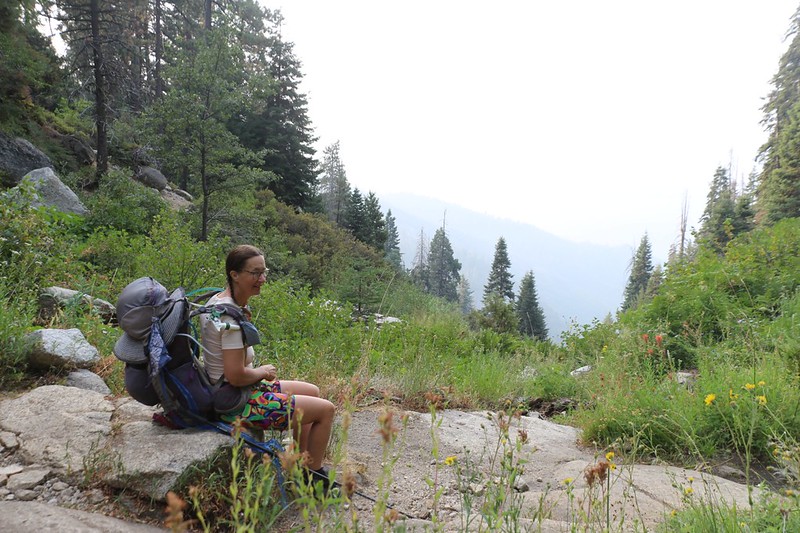 We took a break at 8am at Panther Creek, but there wasn’t much of a view due to the smoke

Luckily for us, a lot of the trail was within forested areas, so we had a chance to stay cool in the shade.  It was only the first part that was exposed to the south along the canyon walls, and it had been dark when we walked by.  Naturally, the trail broke out into the sun every so often, and it went uphill and downhill at times, but it was all working out in our favor.  We were making excellent time. 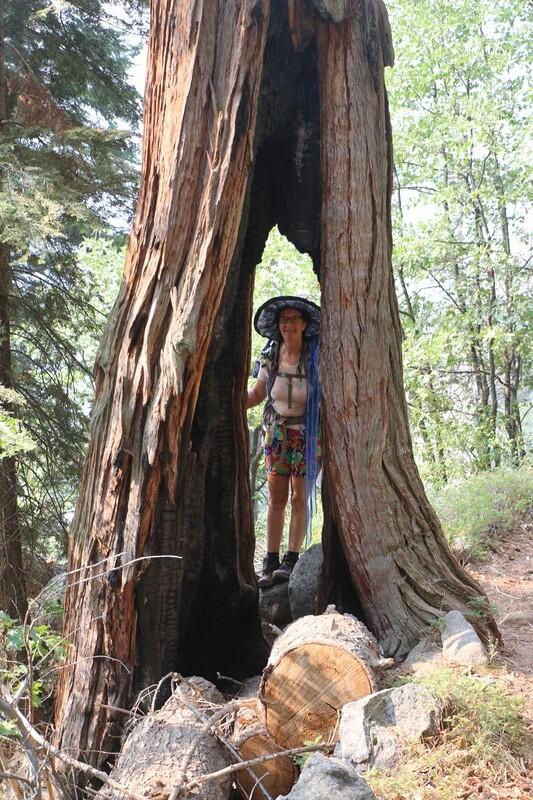 Vicki poses, looking through the hollowed and fire-scarred trunk of a tall pine 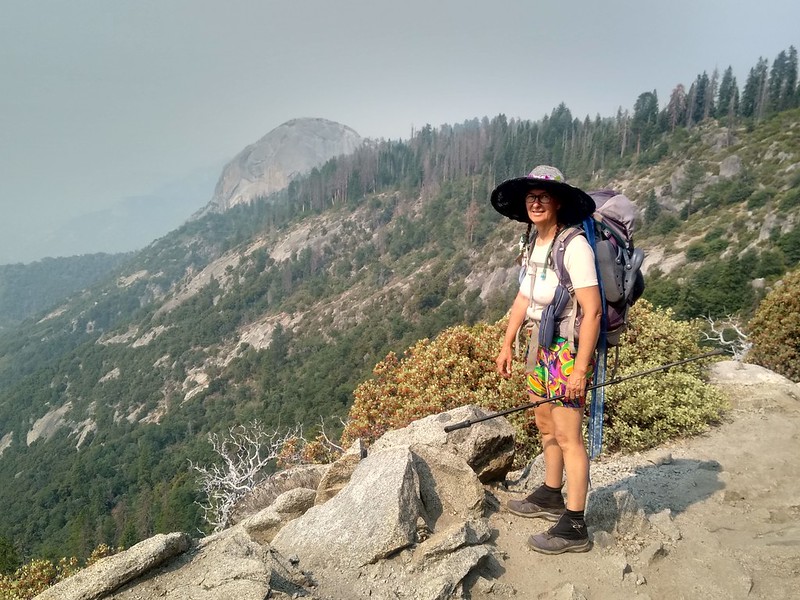 It was only 10am when we reached Eagle View, where we could see Moro Rock in the near distance.  We also noticed another section of forest up ahead, and when I checked my GPS it showed that we only had 3/4 of a mile to go!  Woo hoo!  Soon the trail entered into a completely different type of forest.  In fact, this was part of the Giant Forest, and soon we were treated to the sight of Giant Sequoias right along the side of the trail! 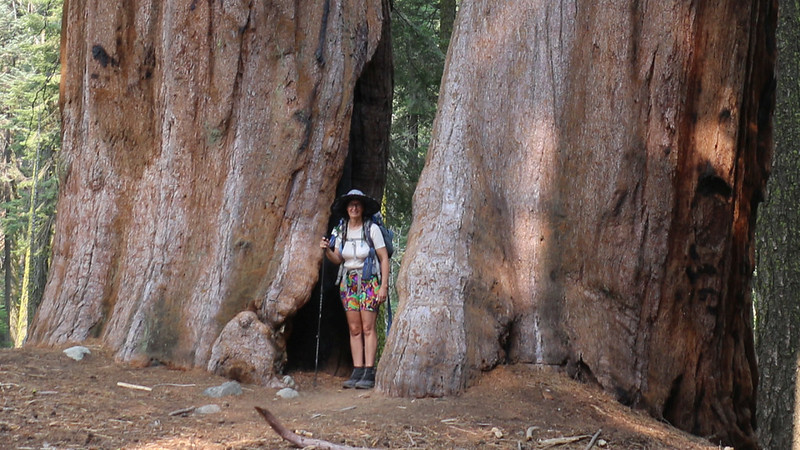 The HST went through the Giant Forest, and Vicki posed between two mighty Giant Sequoia Trees 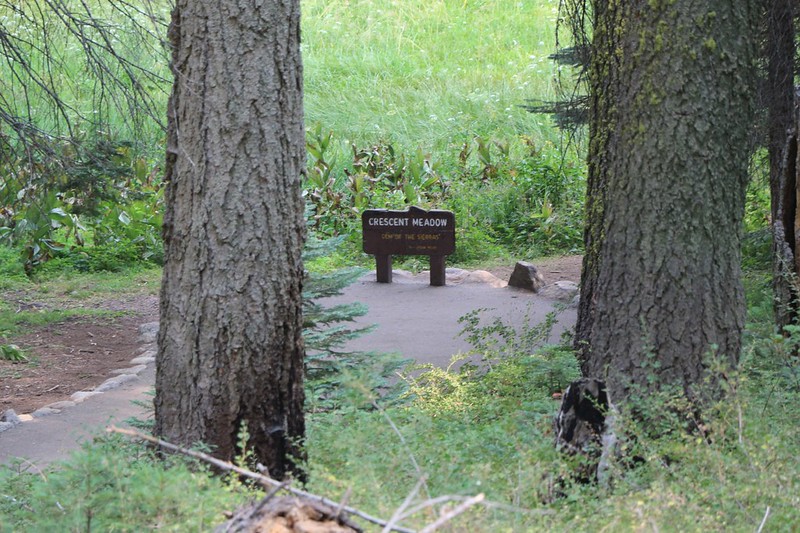 We arrived in Crescent Meadow, and began to see the tell-tale signs of day-hiking tourists

Soon, we came upon asphalt-paved pathways and large wooden signs.  Now this was civilization!  Amazingly, the High Sierra Trail turned into asphalt near the end.  We even spotted out first tourists!  I started to feel a bit self-conscious about how dirty and stinky my clothes were, but I braved it out by announcing to the people we met that they would be well advised to stay safely upwind of us.  Everybody laughed and asked us questions about the trip, and we also found out from them about the wildfires.  We were relieved to know that none of them threatened us here in Sequoia Park. 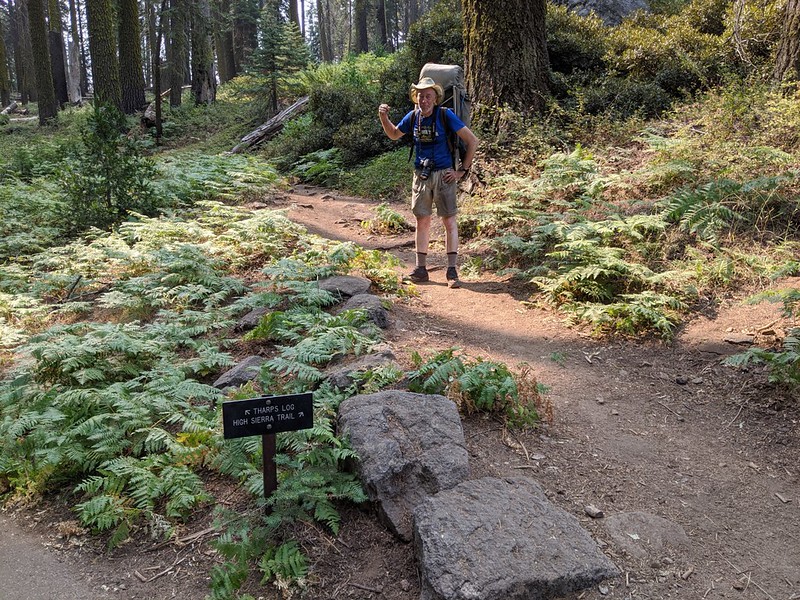 Me at the point where the High Sierra Trail begins its journey to Mount Whitney, but it was the end of the hike for us

We made our way to the trailhead parking lot, and there was Vicki’s car.  Hooray!  We made it!  All told, we had hiked 77 miles, with over 17000 feet of climbing and more than 20000 feet of descent, spanning eleven days and ten nights in the wilderness.  Now, that was one heck of a trip!

We got out some non-stinky clothes from the trunk of the car and changed in the nearby restrooms.  True, our bodies were still stinky, but at least we looked like normal tourists.  People wouldn’t shrink away from us while under the impression that we were dirt-encrusted homeless people.  We got out our car food from the nearby bear locker, and I ate a sweet danish right away.  I even drank a soda pop.  Now, this was living! 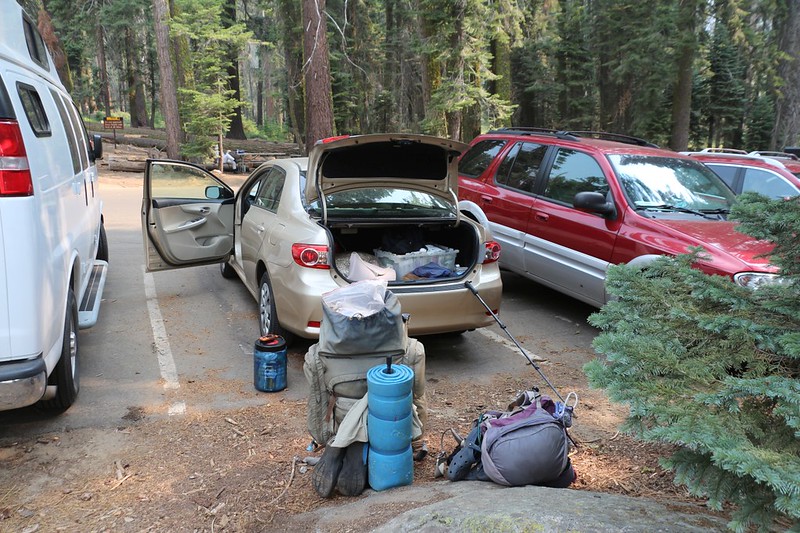 After getting everything into the car, we decided to check out some touristy action.  We drove up to see the General Sherman Tree, and day-hiked down to it from the parking lot.  Covid-19 had definitely lowered the number of people in the park, but there were still enough that it made Vicki uncomfortable when some of them got closer than the approved six-foot distance.  We didn’t hang around very long, and decided that we’d seen enough for one day. 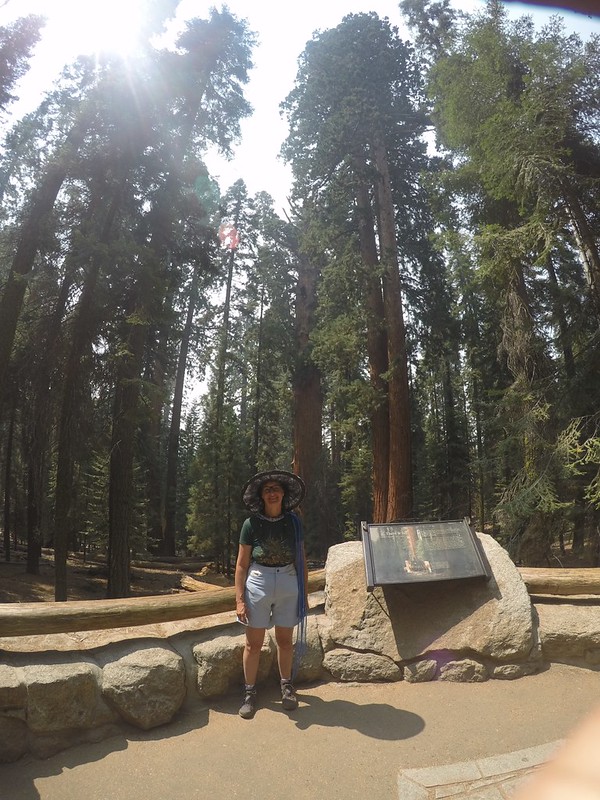 As long as we were there, we took a day-hike to the General Sherman Tree

Onward to the motel, we cried!  But first, some proper food, our sensible side insisted.  We went to a deli and ordered some excellent sandwiches and bought some cold drinks, and brought them with us to the motel.  We checked in and carried our packs into the room, along with our car food.  We took turns taking showers, which were extremely long.  It took a lot of scrubbing to get that much ground-in dirt out of our skin and scalp.  We took our phones off of “airplane mode” and watched as the texts and emails came pouring in.  We ignored most of them, but not all.  We had to send some amazing photos out to our friends and family right away.  Once we were clean, we took a short nap, then woke up and drove into town for some pizza, which we ate outside at a table.  Very civilized.  But there wasn’t much to do other than that, we discovered, and we ended up heading to bed quite early.  We had woken early, and we planned to wake up early again.  And then we slept comfortably on a real mattress, like regular people.  It was quite refreshing. 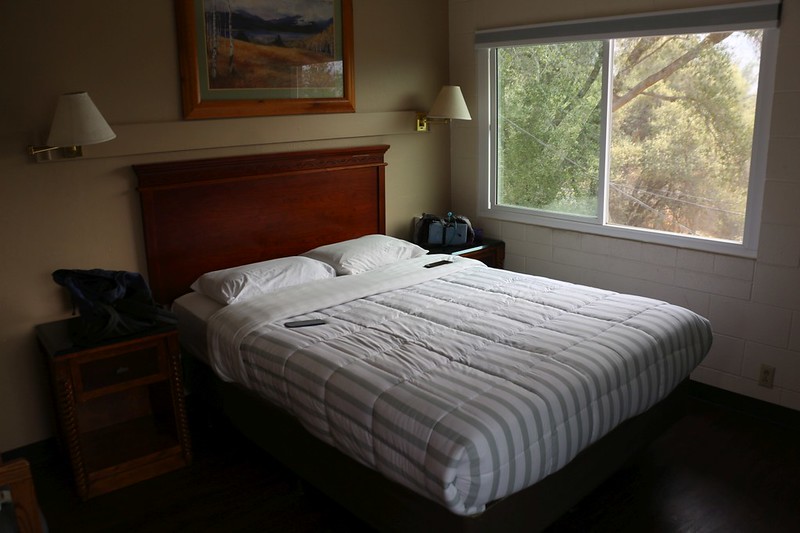 We had a motel room reserved in Three Rivers, and we headed directly there for a shower and some normal food – Yay!

The next morning we woke up early and headed out by first light.  We had a six hour drive ahead of us to reach the east side of the Sierra Nevada where our other car was parked.  It was a long and uneventful drive through a very hazy and smoky landscape.  It seemed that the entire state was covered in smoke.  We got to Lone Pine, where it was almost 100 degrees, and drove up the switchbacks on Horseshoe Meadows Road.  It was a nice, comfortable 70 degrees up there.  Southern High Sierra Summer.  Just the way we like it.  Except for the smoke. 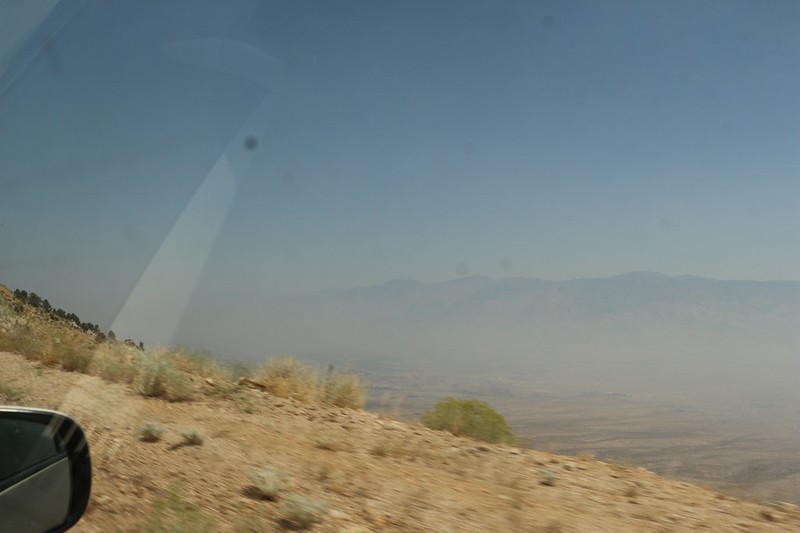 The next day we drove six hours to Lone Pine, and drove up the long road to Horseshoe Meadows to get our other car 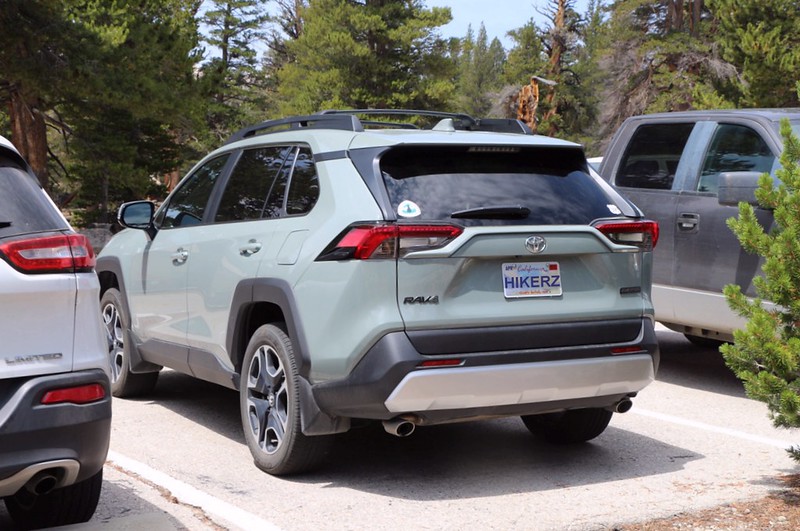 We got to Horseshoe Meadows at 1pm, so we decided to drive another six hours to San Diego – it was good to head home

It was lunchtime when we got to the car, so we ate some of our car food (and some fast-food we bought down in town), and then Vicki opted for a nice long nap.  We came prepared to stay one more night up there in the back of the Rav4, but after that last night on a real mattress it was tough to get excited about it.  We decided that we could handle yet another six hour drive to reach our home in San Diego.  So we filled the gas tanks of both cars in Lone Pine, and headed south for home.  We knew we could make it the entire way on one tank. 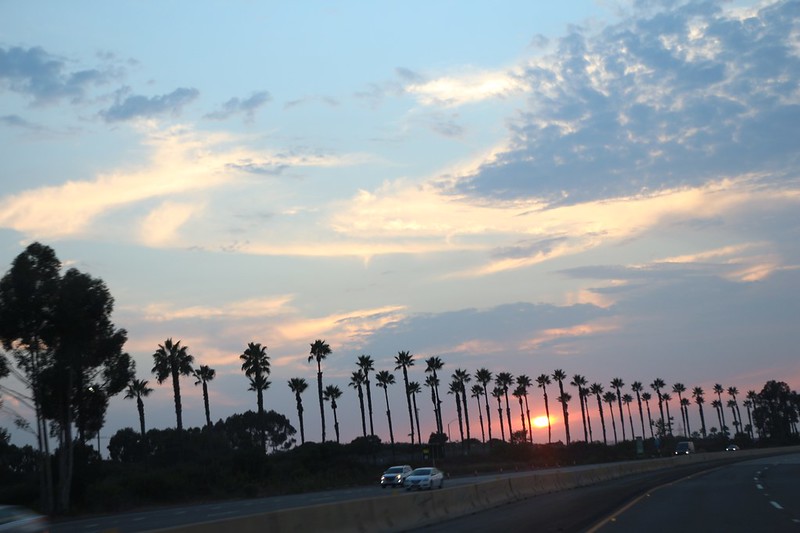 We made it back to a beautiful sunset in San Diego, and a well-deserved rest after our excellent, 70 mile, 11-day trek

On the way home, I thought about the trip.  Pretty much everything went right.  We had a great time, a challenging time, and even when we got drenched by a thunderstorm we still had fun.  Vicki hiked really well once she got fully acclimated, and did a lot better than I’d expected,  Our gear all worked well, including the new tent and down sleeping quilt.  Except for the final day, the views had been spectacular.  We now understood why the High Sierra Trail was so wildly popular.  It was beautiful.  Even when hiked backwards, from east to west!