Day 9: We hiked the PCT south from Susie Lake to Lake Aloha and continued on to tiny Lake Margery

It was just another beautiful day in the Wilderness.  This was our ninth day (of ten) and we knew that we were on our way back to civilization, which dampened some of our enthusiasm, but not all.  Thoughts of ice cream and hamburgers and omelettes were enough to keep us motivated.  Meanwhile, freeze-dried food would have to do.  And an additional night spent camping by a lake sounded good to both of us.

Susie Lake in the morning sunshine from the eastern shore

We woke up just after dawn and ate our re-hydrated eggs by the lake shore.  It was very peaceful, but we knew we had to go.  So we packed up our gear and loaded our backpacks for an easy day of hiking.  We only had about four miles to walk, plus 500 feet of elevation gain, so we weren’t too worried.  We could take our own sweet time.

The trail followed the shore around the south side and headed west.  There were a lot of nice camping spots on the western shore, but we didn’t stop to explore.  I took a couple of panorama shots and a video or two, and we continued on our way.  The trail began climbing gently as we left the lake behind.

Susie Lake panorama from the southwest shoreline on the PCT. Our campsite had been on the opposite shore.

Video panorama of Susie Lake from the Pacific Crest Trail

Looking back at Susie Lake as we climbed southward on the PCT. Good-bye Susie Lake! You were beautiful!

In less than a half mile we came upon Heather Lake.  The trail hugged the northern shore, largely thanks to the cliffs and steep granite slopes leading directly down into the lake.  It was obvious that parts of the trail had been created by brute force.  It was a fun hike, and the lake had a wooded island in the middle.  We wondered how many people dared to swim across in the cold, deep water.  During the planning stage of this trek, I had thought about camping there, but reality was much different than theory.  We only found one tiny spot to camp at the northwestern end of the lake; the rest of the shore along the trail was far too steep-sided for a tent.  But there might be some spots for adventurous folks on the opposite side. 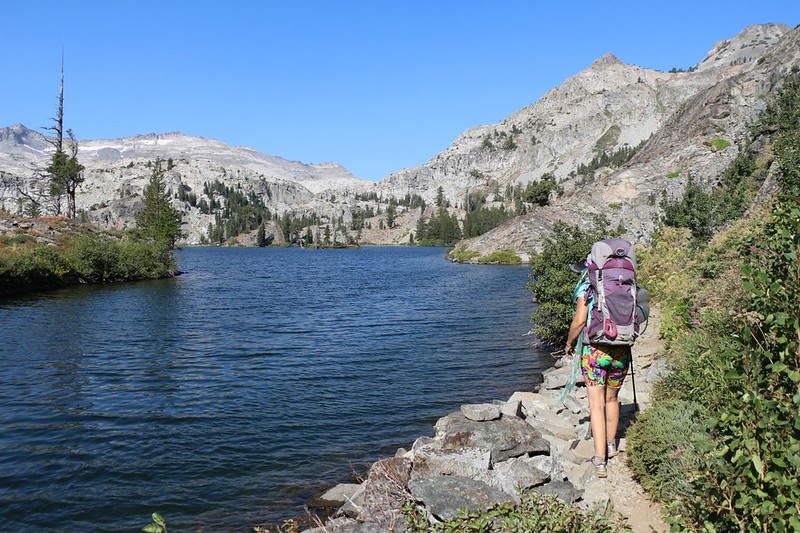 The PCT was cut into the precipitous northern shore of Heather Lake – a fun trail to hike!

Another panorama video of Heather Lake – we really liked it! 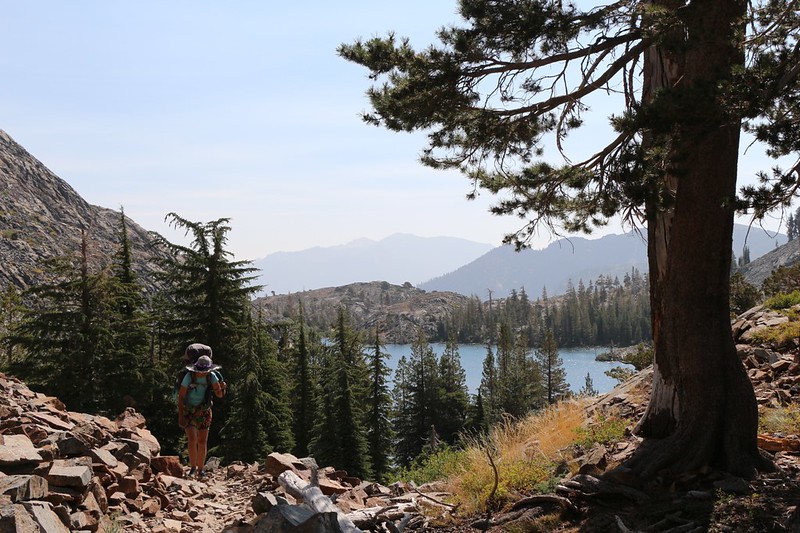 We arrived at Lake Aloha just before noon.  It was warm in the sun but there was a nice breeze to offset the heat.  We hiked along the shore for a short distance, then stopped for our usual midday activity:  Lunch and a nap.  Vicki curled up on a granite slab and slept, while I read my book and gazed out over the lake.  Very peaceful.

Eventually, of course, we had to continue onward.  We shouldered our packs and hiked southward, the trail climbing and descending over the glaciated granite slabs.  As we hiked, we began to see more and more people.  It was a beautiful Summer day, and there were folks hanging out all along the shore, including the usual pretty girls in bikinis taking selfies for posting on the internet.  Everyone was on vacation, and spirits were high.

The Pacific Crest Trail follows the shore of Lake Aloha for over 1.5 miles – it’s a very large lake

Lake Aloha and the Crystal Range. Pyramid Peak, left, is the highest point in the Desolation Wilderness, at 9975 feet.

Vicki and I weren’t quite ready for civilization, however.  We prefer a more solitary wilderness experience.  So, after a final rest by the lake, we continued up the hill until we intersected the side-trail to Lake Margery.  Then we turned left and headed down a tiny, barely-used path.  Now, this was more like it!

The lake was secluded, as well.  We were the only people there.  We set down our big packs and wandered around, searching for a good camping spot.  Then we proceeded to set up camp.  We took a nap, read our books, filtered water, and eventually made dinner.  This was to be our last night on the trail, so we sat on a log by the lake and ate supper, listening to the frogs and insects and birds.

Afterward, we took our usual after-meal constitutional.  This time, we decided to head further down the trail to Lake Lucille.  It was less than a half mile away, a short distance down Lake Margery’s outlet stream.  Unlike Lake Aloha which eventually drains into the Pacific Ocean, these lakes drain into the Lake Tahoe Basin.

Lake Lucille turned out to be even prettier than Lake Margery, if you ask me.  But it was too late to move our campsite.  Instead, we simply enjoyed it.  It had reeds, and lily pads, and was quite pristine.  We continued on to the northeast end and discovered another group of people camped there.  It turned out that they were scientists and graduate students studying the Sierra Nevada Yellow-Legged Frogs, an endangered species.  We told them about the frog we saw on the shore of Lake Margery near some boulders, but one of them had already counted that one.  It was a big frog, and their tadpoles are huge, too. 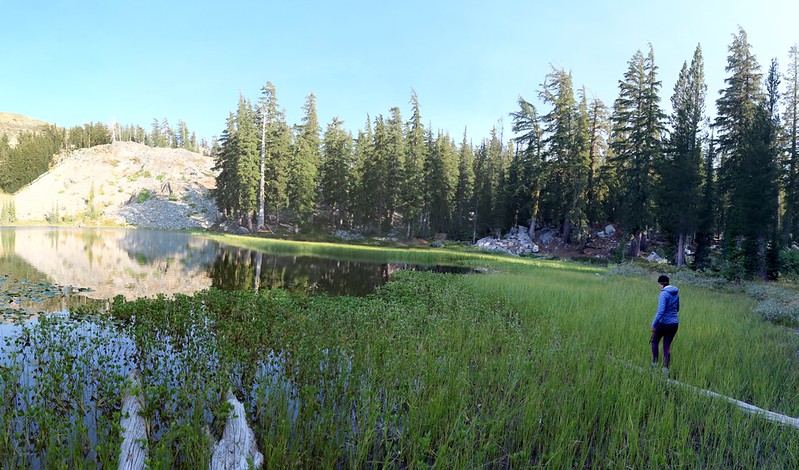 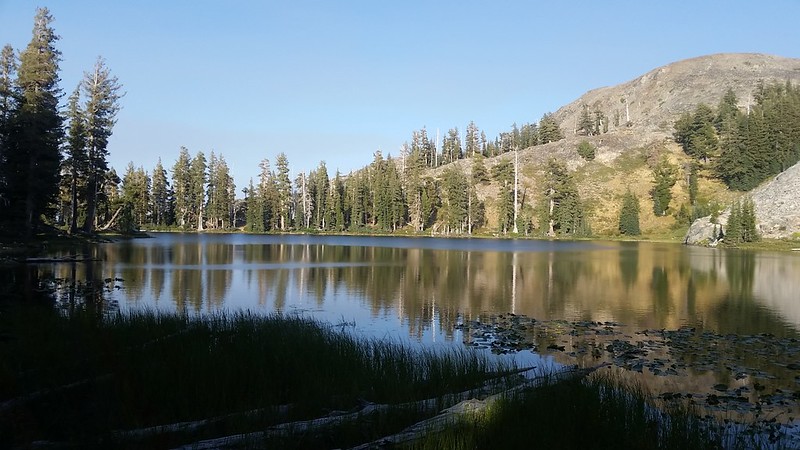 Lake Lucille in the evening from the west end, with Keiths Dome (peak 8646) on the right

They were about to eat their own dinner, so we headed to the north toward another small, unnamed pond.  It was pretty enough, but it was the view beyond the pond that drew us there.  We arrived at a high lookout at the head of a deep valley.  It was very hazy in the afternoon sunshine, but across the way we could see Susie Lake nestled in its own high valley, with Dicks Peak and Dicks Pass beyond.  We thought we’d said our final good-byes to Susie Lake that morning, but we were thrilled to have one last view.  It was fun to see where we’d been hiking the last two days. 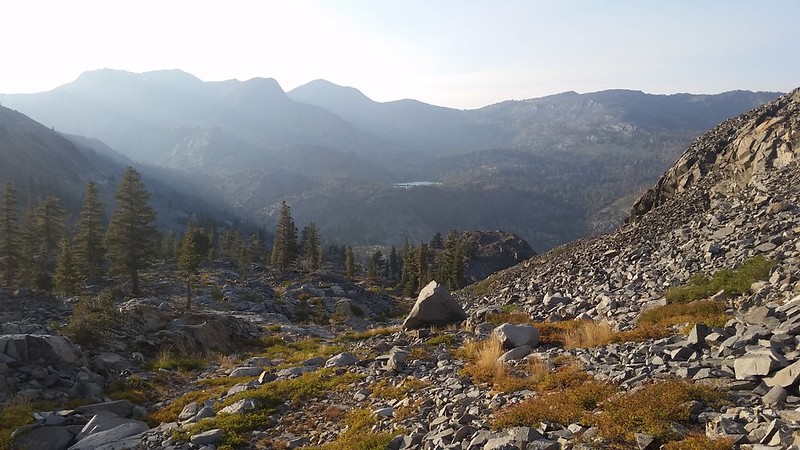 After that, it was time to head back to camp.  When we neared Lake Margery, Vicki headed directly to the tent, but I decided to explore a bit more to the southeast.  I wanted to find a shortcut back to the “other” trail that led directly to the PCT further in the south.  This would save us time tomorrow.  The terrain was a bit rough, but it didn’t take me long, and then I joined Vicki once again. by the lake shore.  We sat, holding hands, as the evening drew on and darkness fell.

Then it was time for bed, on our final night of the trek.