Day 10:  We finished our trek by hiking from Lake Margery to Echo Lake and taking a water taxi to the car.

This was our tenth and final day in the wilderness, and we decided to get it over with right away.  We woke to the alarm before dawn and started getting ready inside the tent.  We packed everything rapidly and began hiking by 6am.  We ate our final “no-cook” breakfast as we hiked back toward the Pacific Crest Trail along the shore of Lake Margery.  The air was cool and calm at that hour.  We were rewarded by fine reflections on the lake’s surface.

We headed uphill, cross-country, until we joined with the little-used Lake Lucille Trail.  Soon we were back on the PCT.  That was all the ascent we had to do.  The rest of the hike to Echo Lake would be downhill all the way.  We took a break and tightened our shoelaces for the upcoming descent, and also finished off our breakfast.  We were the only ones on the trail at this hour.

At first the trail led through a sparse, grass-floored pine forest.  The morning sunlight angled through the trees and lit the needles and made highlights of the tall seed-heads on the grasses.  Very picturesque.  This section was mostly flat, with easy hiking on a very broad trail. 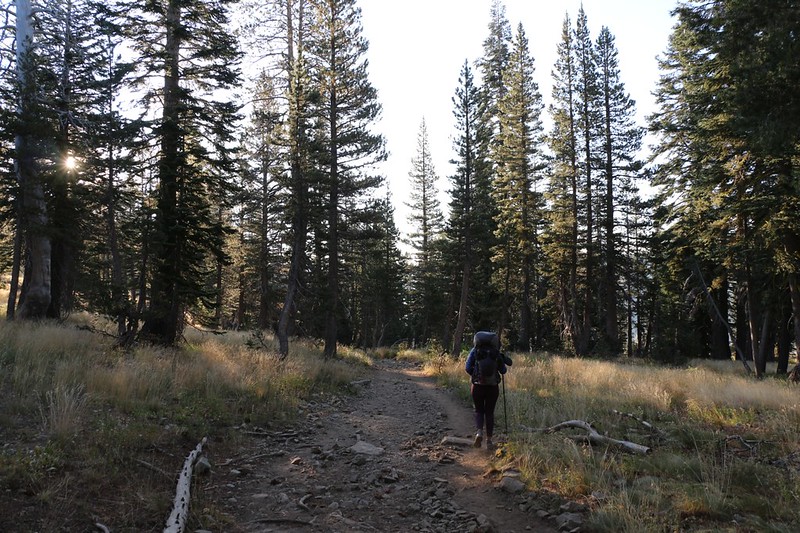 Soon enough, the trail left the trees and began the long descent, largely in the open.  There were great views to be had along the way.  We could see Echo Lake off in the distance, but even closer was Tamarack Lake.  The trail passed by high above it, so we could see the waters sparkling down below.  We wished that every backpacking trek could finish with views like these.

We can see Echo Lake in the distance, but it’s a long way down 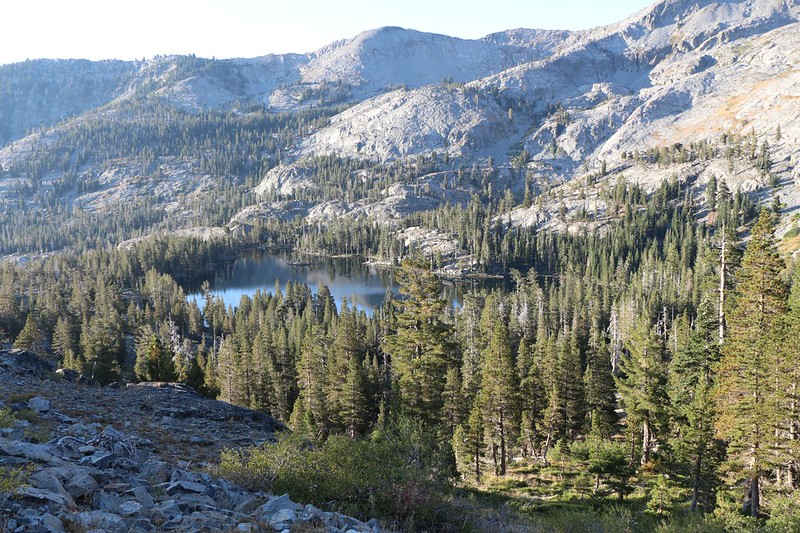 We got a view of Tamarack Lake in the morning sunlight 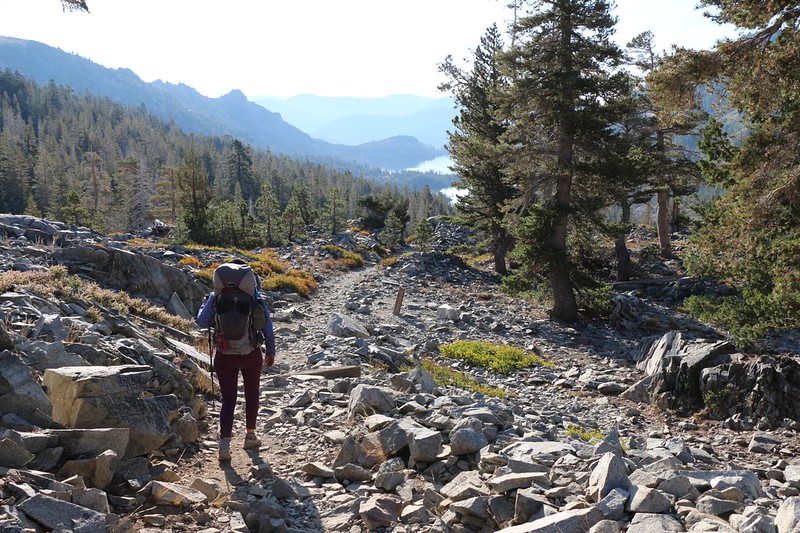 The trail grew narrow and rocky.  The footing became more unstable and Vicki’s sore foot wasn’t having a good time.  So we hiked even slower, but loose rocks are still loose no matter how slow you go.  This last section of trail was really taking its toll on Vicki.  It made me sad to see her, and there was nothing that I could do except be patient as she negotiated the chunky granite stones.  Soon enough, even her old knee injury began acting up, thanks to all the rocky steps.  So she put on her stretchy knee brace, and we hiked even slower.  I helped her when I could on the bigger steps, but the trail was narrow and she had to do most of it herself.

It’s true that we had all day to get there, but we still wanted the hike to be over with as soon as possible.  Civilization was beckoning to us.  Nonetheless, even bad hikes end if you keep on putting one foot in front of the other.  And so did this one.

Soon enough, we came to the wilderness boundary sign, with less than a mile to go.  After that, we entered the pine forest surrounding Echo Lake.  The trail became smoother, and Vicki’s attitude improved immensely. 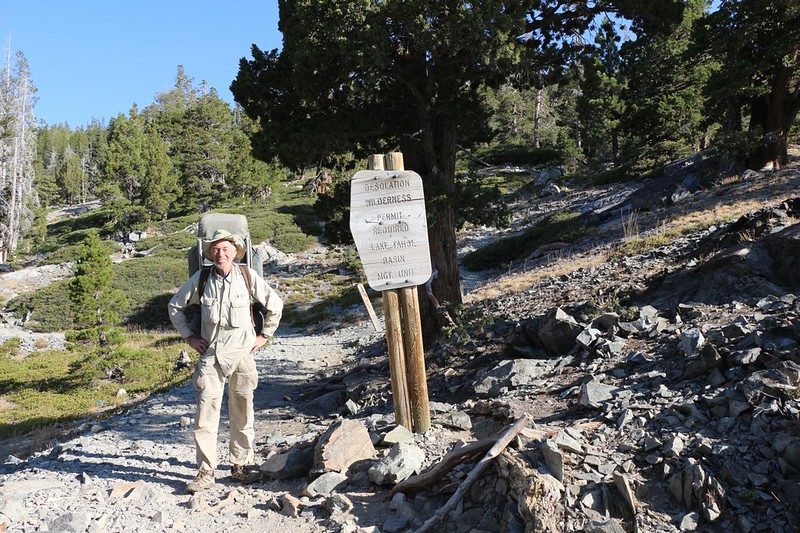 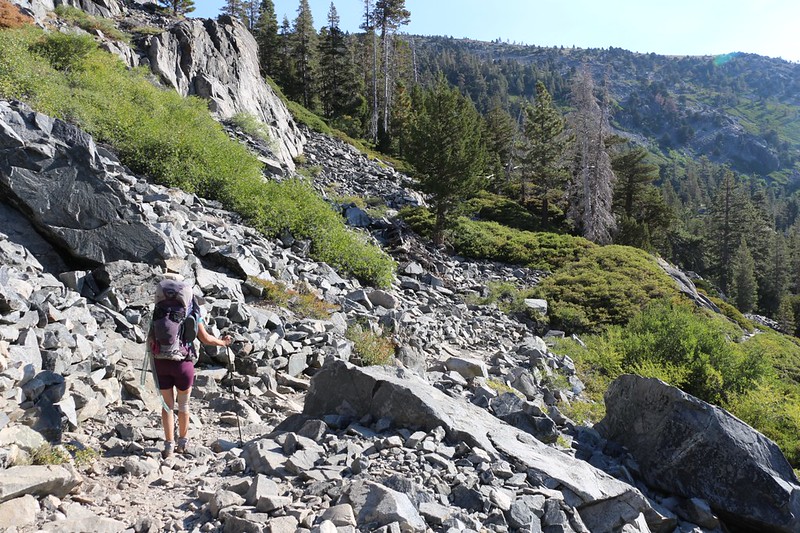 We arrived at the water taxi dock on Echo Lake just after 9am, which was excellent time (for slow hikers).  We put down our packs, directly on the dock, and Vicki swore that she would carry it no further.  So we really needed that boat ride.

Yesterday, we had been asking other hikers if the boat was still running, as the lake’s water level had been getting lower, and we were relieved to hear that it was still in operation.  There was a narrow section between the upper and lower parts of the lake, and when the water got too shallow, the boat couldn’t get through.  Two days ago, on the breezy morning when we’d left Dicks Lake, it had been too windy for the boat to safely navigate the narrow passage.  We were happy to see that there was little wind this morning.

There was a public pay phone (land line) in a shack near the dock.  We tried everything we could to get a call through on that line using our credit cards, but it refused to take our money.  The only thing that would work was eighty cents in coins.  We were ultralight backpacking, so of course we had no heavy coins.  We began to worry that Vicki might have to carry her pack an additional three miles.  After asking every hiker we saw whether they could make change from a dollar bill, a nice man who lived in one of the local cabins came back and gave us the money.  What a great guy!  We thanked him profusely and made the phone call.  The water taxi service was running!  Hooray!

About a half hour later the boat arrived, and we loaded it with ourselves and our gear.  Then we had a fast, exhilarating ride back to the trailhead.  Let me tell you:  After ten days in the backcountry, this is the only way to hike! 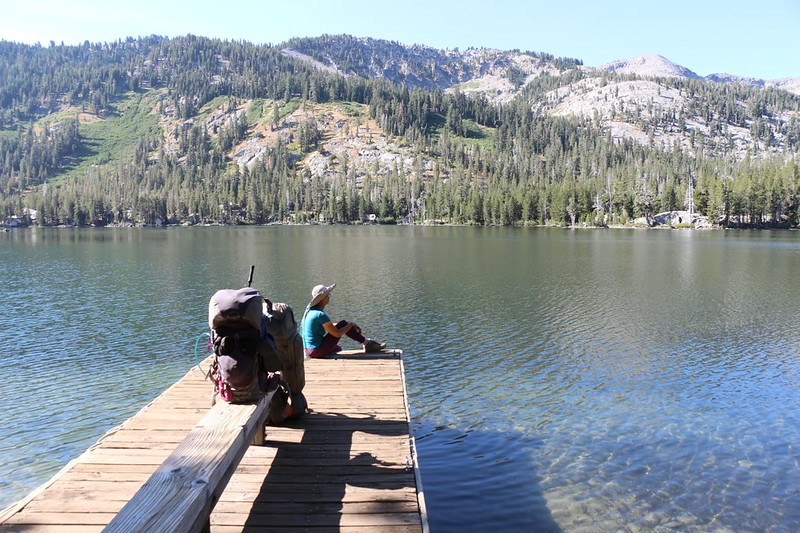 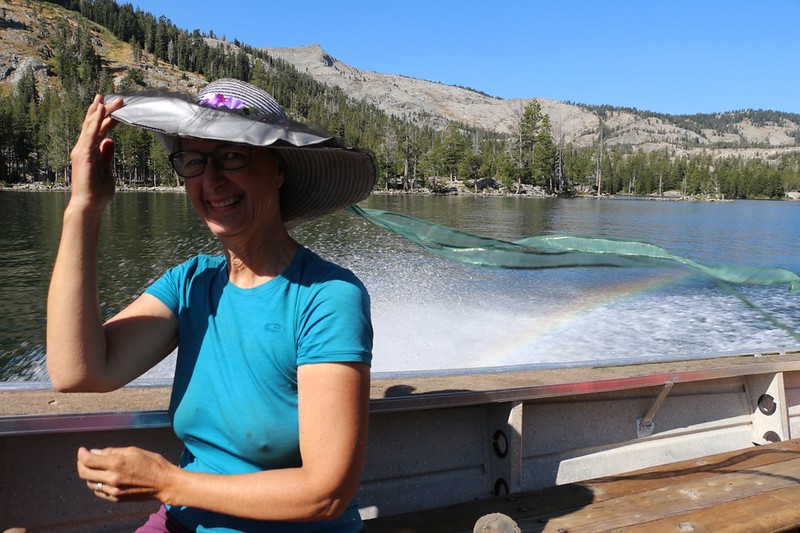 GoPro video as we head for shore – this is much faster than hiking! 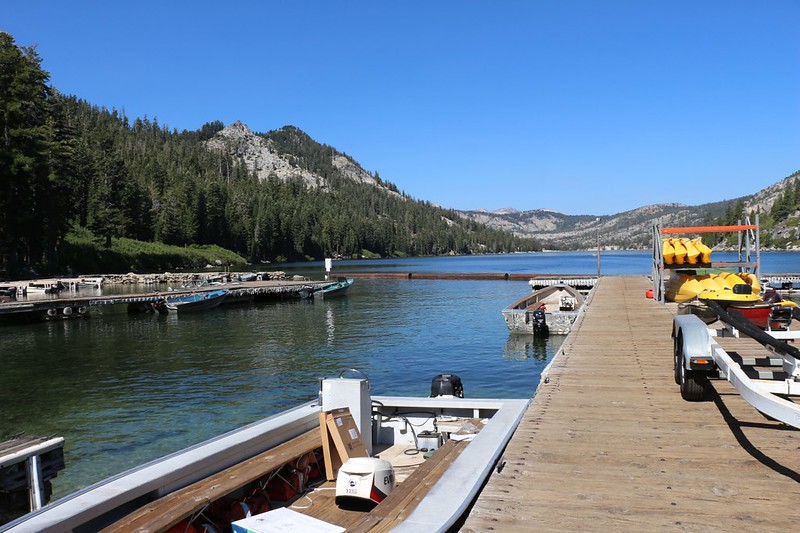 It turned out that the name of the water taxi boat was “Why Walk” and we heartily agreed.  It was great.  I unloaded both packs while Vicki sat down on a bench in the shade.  I paid the fee ($14 each) and headed off to get the car.  It was dusty from being parked alongside the road for ten days, but I didn’t care.  I drove back down to the dock and loaded our gear in the car.

Then we did the most important part of returning to civilization:  We ate non-freeze-dried food!  And it was awesome.  Vicki had an ice cream bar, and we also bought some deli sandwiches to eat on the drive home.  I was hoping to find a “Desolation Wilderness” themed T-shirt, but we had to settle for an Echo Lake shirt instead.  It’s all good. 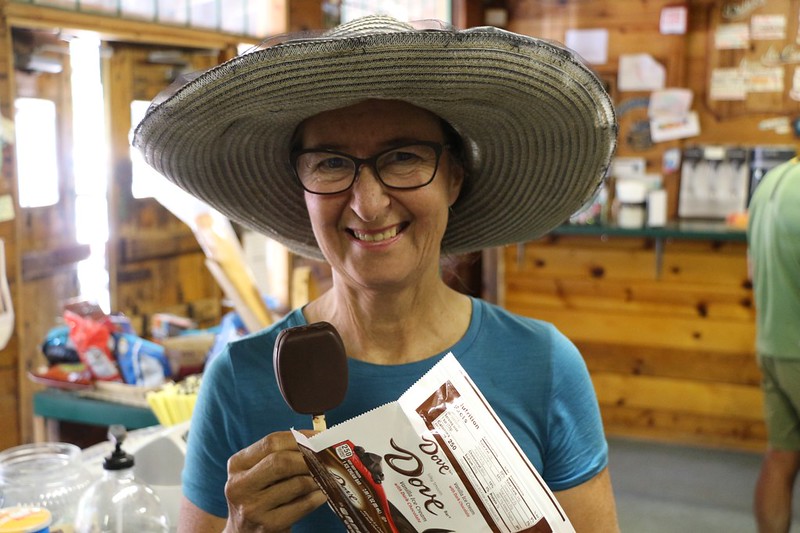 Vicki gets one of the rewards of civilization – ice cream from the store at Echo Lake!

We asked about showers, because we were extremely stinky and dirty, but there weren’t any, unless we wanted to pay for a room at the chalet.  No, thanks.  Home was nine or ten hours away, and if we left immediately we’d be home before midnight, with plenty of time to get clean.  And get a good night’s sleep in our own bed.  Oh, yeah!

With that vision of heaven before us, we headed out on the long road home.  As we drove south, we talked about the trek.  On the downside, we’d cut some sections of the initially planned hike to accommodate Vicki’s ailing foot, but we kind of expected that early on, and I don’t think we missed much, to tell the truth.  In fact, I was proud of her ability to keep on going in the face of pain.  She’s got some serious drive and determination.  She really wanted to go on this hike!  On the upside, our revised plans paid off well.  We’d camped at several beautiful lakes that weren’t part of the original plan.  Life’s too short to pitch your tent in an ugly location, after all.  Gear-wise, nothing failed, thank goodness.  The weather had been perfect, cool nights and sunny days, with only the tiniest of sprinkles on our second day, and the sounds of distant thunder were fun to hear.  All in all, it had been an excellent backpacking adventure.