We woke up and ate breakfast sitting on the granite slabs near our campsite.  We read our books and spent some time sitting quietly, gazing out over the still waters of the lake in the morning light.  We had really enjoyed staying here at Middle Velma Lake, even though it hadn’t been part of our original plan.  Sometimes, life hands you a new plan and it works out for the better.  This was one of those times. 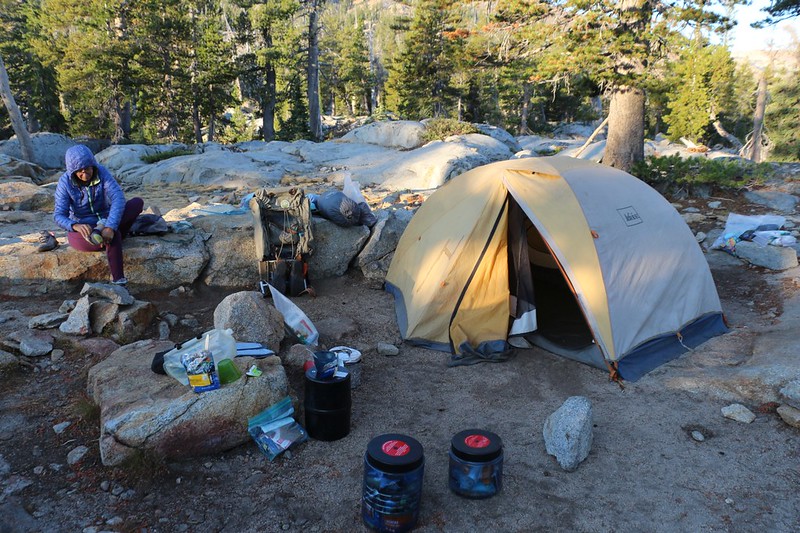 Eventually, of course, we had to pack up and begin the day’s hike.  We had about 600 feet of elevation gain over three miles, so we weren’t in much of a rush.  We decided that we would stop anytime we felt like it, with no pressure whatsoever, which suited Vicki and her sore foot just fine.

We hiked back to the PCT, then continued south.  We were on new trail now, a place we’d never been before, and that’s always interesting.  The trail gradually climbed up and around the southern side of Middle Velma Lake, and we were rewarded with some fine views of the lake, with Phipps Peak dominating the background.  Blue water, blue sky, and gray granite.  We noticed that there were lots of groups camped along this section of the lake, which made us glad that we chose the less-traveled spot on the western shore. 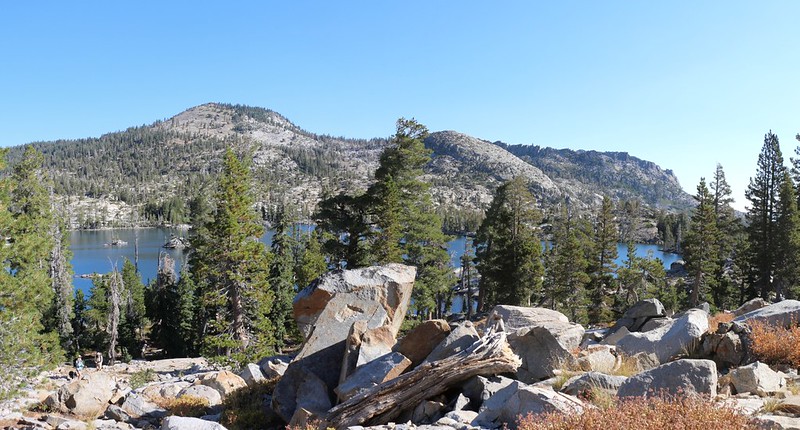 The trail continued south, along a forested ridge, high above Upper Velma Lake.  We kept trying to get an unobstructed view of the lake, but it proved impossible thanks to the trees.  Oh well.  So we kept on hiking.

Eventually, we arrived at Fontanillis Lake after a steady climb.  We took off our packs for an extended break.  Then we grabbed our books and some snack.  We headed for the shore and took off our shoes, then soaked our feet in the cold water for a few minutes.  It felt great!  It was breezy, and our feet dried rapidly in the sunshine.  Very refreshing. 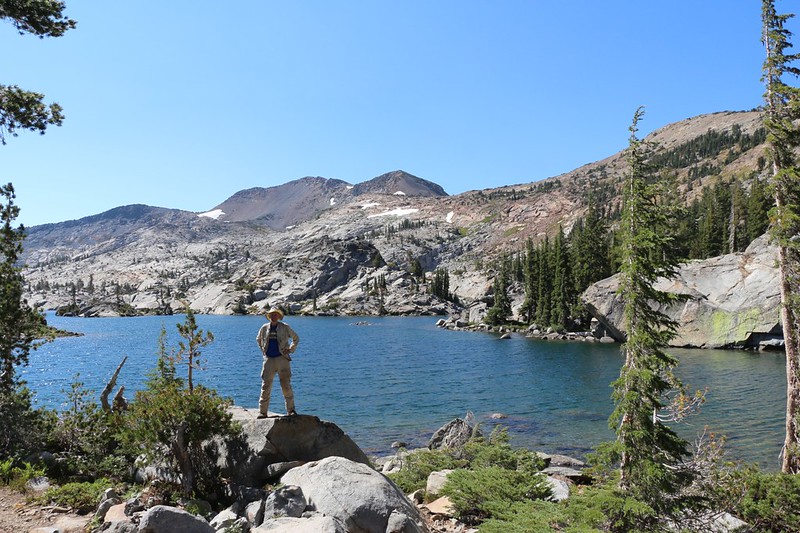 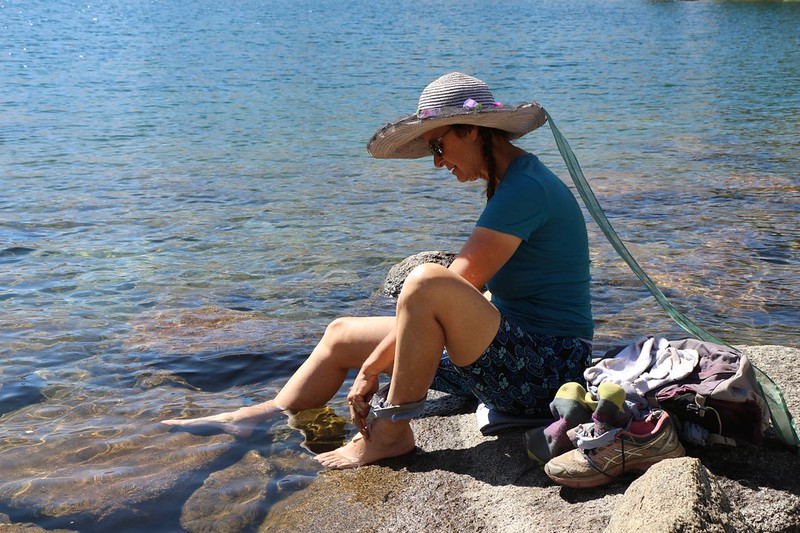 Vicki cooling her hot feet in Fontanillis Lake on the Pacific Crest Trail – I did it too!

We grabbed our packs and continued along the shore of the lake.  Almost immediately, we came upon the outlet stream.  The map showed it flowing directly into Upper Velma Lake, so we put down our packs once again, for yet another extended break.  Why not?  We followed the stream a short distance and discovered some excellent views, probably the best views we would get all day.  Definitely worth another break, we told ourselves.  We could see Upper Velma Lake, Phipps Peak, and even the deep blue of Lake Tahoe off in the distance to the east.  Excellent.

As long as we were here, we also decided to take a series of posed, timer shots of ourselves within this view, in the hopes that at least one of them would turn out OK.  We don’t get enough pictures with both of us, and these are usually the ones that I print out and hang on the wall back home. 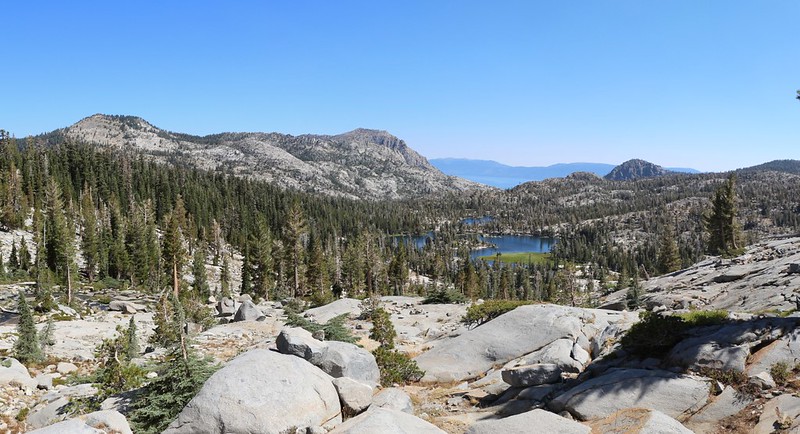 Phipps Peak on the left, Lower Velma Lake below, and Lake Tahoe in the distance right of center 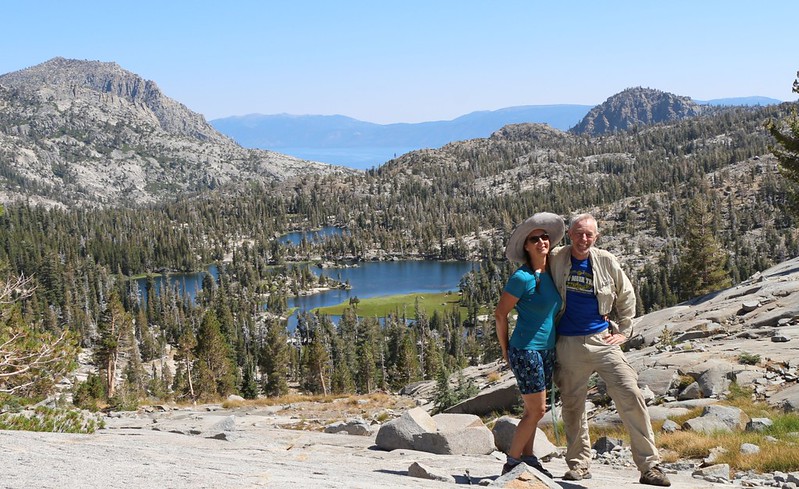 We continued hiking along the shore of the lake, and I noticed that Vicki was slowing down.  Her foot was hurting and she was looking tired.  So we stopped yet again, in the shade of a pine tree, and got out our lunch.  We ate, then Vicki took a long nap while I read my book.  This was turning out to be a seriously relaxing day!

Refreshed, we continued onward.  Next stop:  Dicks Lake.  It was less than a mile away, and only 250 feet higher.  Even hiking slowly, we were there in no time at all.  It turned out to be a popular place.  There were a several groups of people enjoying the water where the trail met the shore.  Two girls were in bikinis, deciding if they dared to get in the cold water.  Vicki and I put down our packs and headed off along the shore to the east, looking for a good camping spot, hopefully not too close to other people.  We like our privacy in camp, and prefer to cultivate the illusion that we’re out in the wilderness all by ourselves. 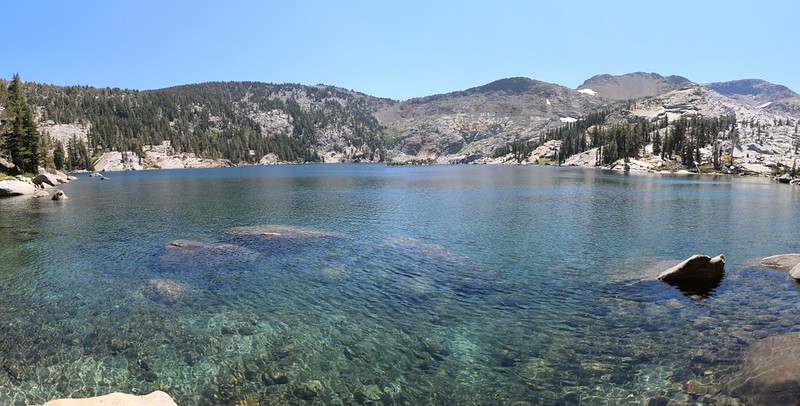 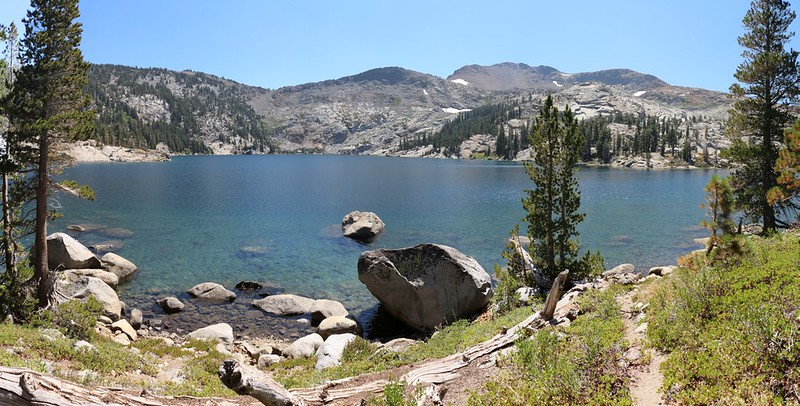 We found a good spot.  I left Vicki in camp and walked back to the packs.  I grabbed mine, carried it to camp, then headed back to get Vicki’s pack.  There was no need to aggravate her foot more than necessary.  We set up camp in the shade of some pines.  We were up above the lake in the trees but still had a nice view of the water.  Then we took a huge afternoon nap on our air mattresses inside the screened-in tent, listening to the insects flying by outside.  Very peaceful.  We slept, woke up, and slept again. 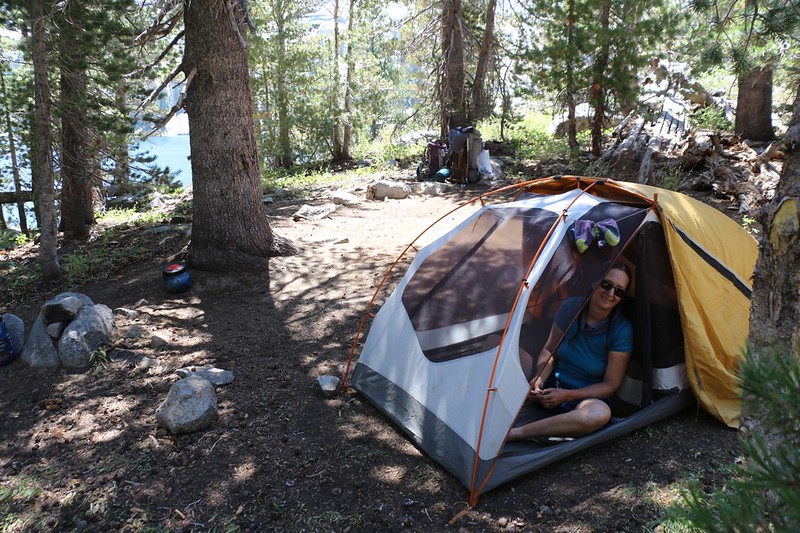 Eventually, we got up for real.  We changed into our warmer evening clothes, then I went down to the lake and filtered enough water for dinner and tomorrow’s hike.  We ate our meal looking out over the lake, staring up at Dicks Pass.  We were trying to figure out where the trail went, but weren’t having much luck.  I pulled up the map on my phone’s GPS app.  We stared at the map for awhile, too, with equally poor luck.  The only thing we were certain of was that the trail initially climbed significantly higher than what was obviously the pass, the low spot on the horizon.  We hated when trails did that:  Useless elevation gain for no good reason.  Or so we thought.  We’d find out tomorrow if there truly was a reason.

Evening shadows over Dicks Lake from the northern shore

We spoke about our plans for the morning.  Vicki wanted to get the 1000 foot climb over as early as possible, while the air was still cool, so we decided that we’d get up while it was still dark, and use one of our “no-cook” breakfasts.  I set the alarm for 5:30am and we packed away the stove.

Also, since we’d slept so much during the afternoon, we decided to take a longer than usual after-dinner constitutional.  This time, we headed off cross-country, seeking a shortcut that we would be able to use the next day.  It was fairly easy hiking, uphill of course, and we eventually made it to the PCT.  We decided that it wouldn’t be a problem for Vicki’s foot carrying full packs tomorrow, and then we hiked back to camp via the main trail, as we didn’t want to miss anything due to the shortcut.

After that, we headed off to the tent and went to bed.  It had been an easy day with great views and plenty of naps.  Exactly the way we like our vacations.