Day 6:  Hiked from Rubicon Lake over Phipps Pass then south on the PCT to Middle Velma Lake

The trek was officially halfway done, and it was time to head back toward the car.  But we weren’t ready for civilization yet.  We planned to hike back the way we’d come two days earlier, via Phipps Pass, because we’d loved this trail, the Tahoe-Yosemite Trail, and were more than happy to check out the great views once again.  But after that we planned to see some new trails, with new sights, on the following two days.  This was our current plan, subject to change at any time, just like we’d been doing this entire trek.

Panorama view of our campsite on the northern shore of Rubicon Lake – a great place to camp!

We ate breakfast, packed up everything, and started hiking.  We said goodbye to Rubicon Lake as the trail climbed higher into the pine forest.  Soon, it climbed over the saddle at the head of the valley, and we were treated to fine views off to the south.  Fallen Leak Lake came into view in the distance, and the Grouse Lakes were nestled in the valley down below. 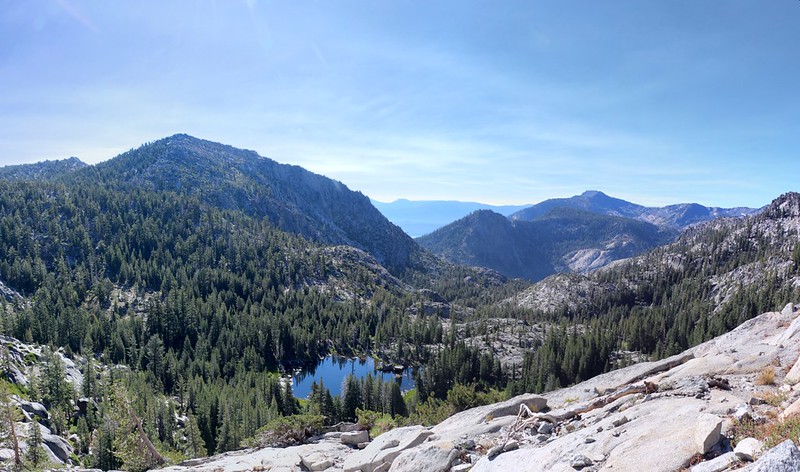 Grouse Lakes below us and Mount Tallac on the right 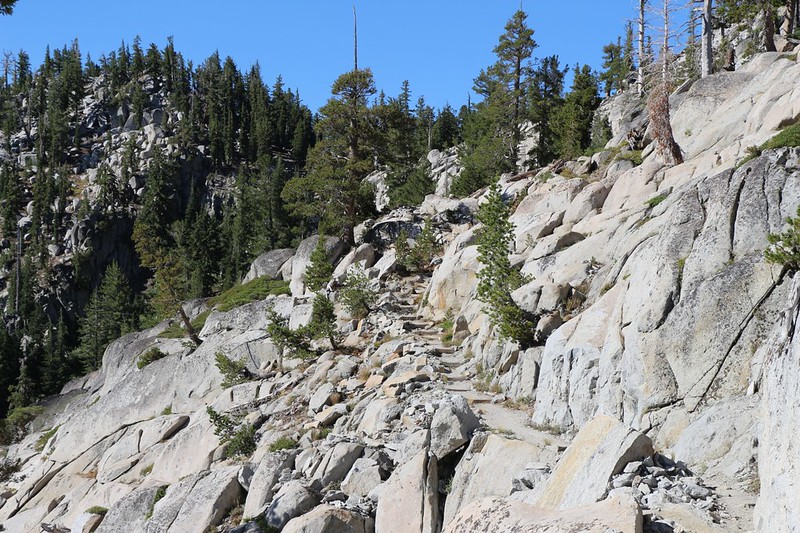 We took our time climbing the steep trail, and eventually made it to Phipps Pass, where we put down our packs to take a break.  Vicki decided that we should climb up the nearby ridge, which seemed a bit crazy to me, but I’ve noticed in the past that Vicki’s crazy ideas almost always turn out to be good ones.  So I grumbled a bit, just for form’s sake, and followed her up the slope.  Once again, Vicki was right.  We had a fine view off to the north, while down below us was Phipps Lake!  It was hidden in the bottom of a bowl at the head of a long valley, and it was round and blue and beautiful. 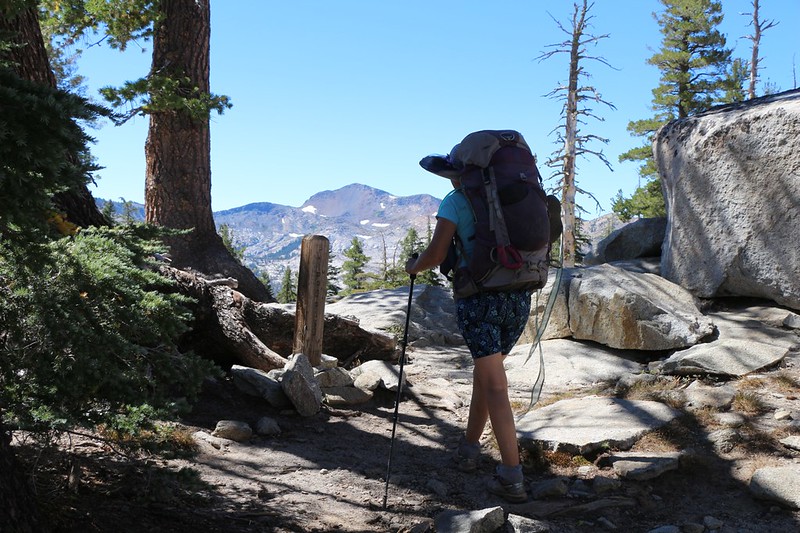 The official trail marker for Phipps Pass, with Dicks Peak in the distance 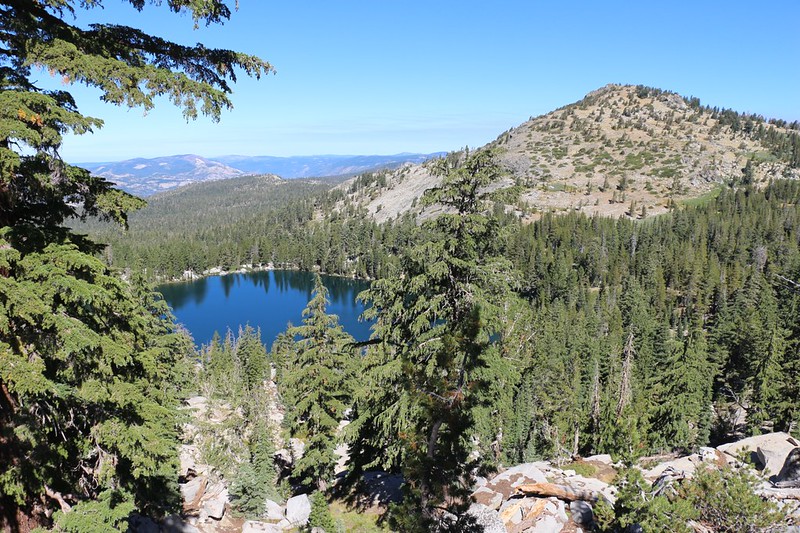 After Phipps Pass, the trail maintained elevation around Phipps Peak, and the views south were superb.  We could see Dicks Peak in the distance, and Dicks Pass (our eventual destination, two days away) to its left.  Both Lower Velma Lake and Middle Velma Lake were looking fine down below us.  As the trail continued around the mountain, we gained some views west.  Far across the way we managed to spy Lake Lois hiding in a high valley, which made us happy because we had changed our hiking plan a few days earlier and didn’t get to see it.  The lake wasn’t exactly up-close-and-personal, but it was better than nothing.

Lower, Middle, and Upper Velma Lakes can all be seen in this panorama shot

We had lunch and a Vicki took a long nap up there on a granite boulder just off the trail, with that excellent view laid out before us.  I alternated reading my book and staring out at the mountains.  This was truly the life.

What goes up, must come down, and not long after that we were descending through tall pines on a gently sloping trail.  Easy hiking.  Some of the trees had these amazing rings of moss on their trunks.  We had no idea why, but theorized that it might have been related to branch formation while the trees were still growing saplings.  Maybe someone reading this who knows better can give me the true answer.  Life is amazing sometimes. 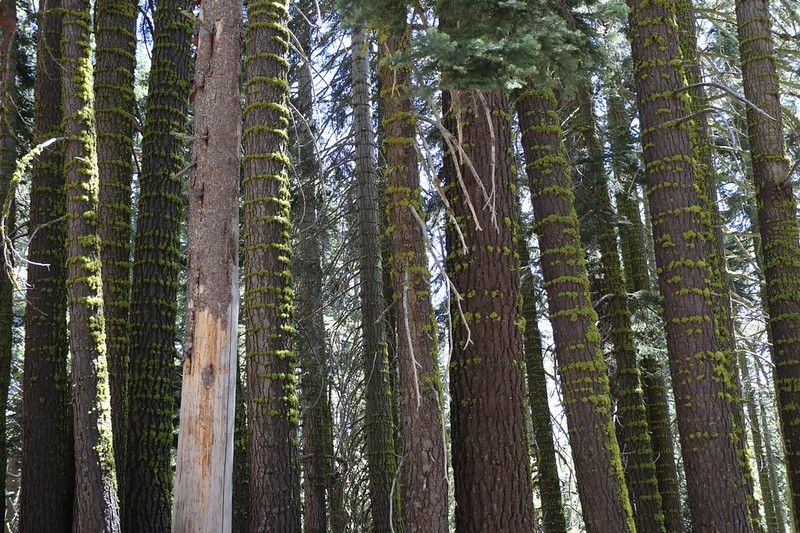 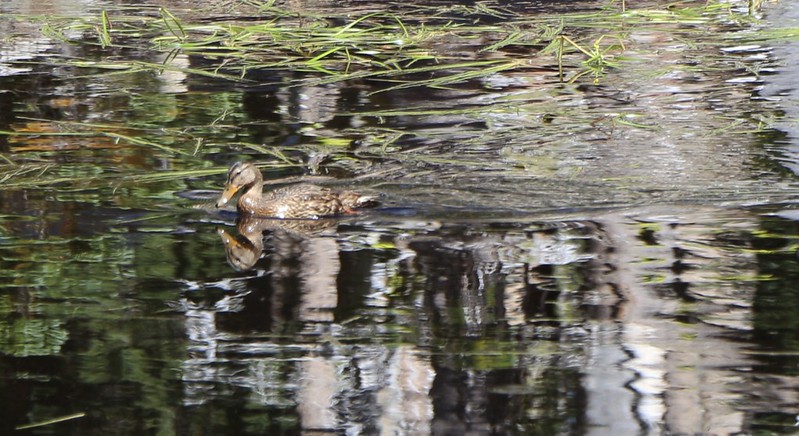 It was only a five mile hike that day, and we arrived in camp in the early afternoon, with plenty of sunlight left.  And that meant another round of laundry.  It had been three days since the last time, and we certainly needed it.  It was pure coincidence that we were camped in the exact same spot as last time, and strung our clothesline between the same two trees.  It felt good to be clean again. 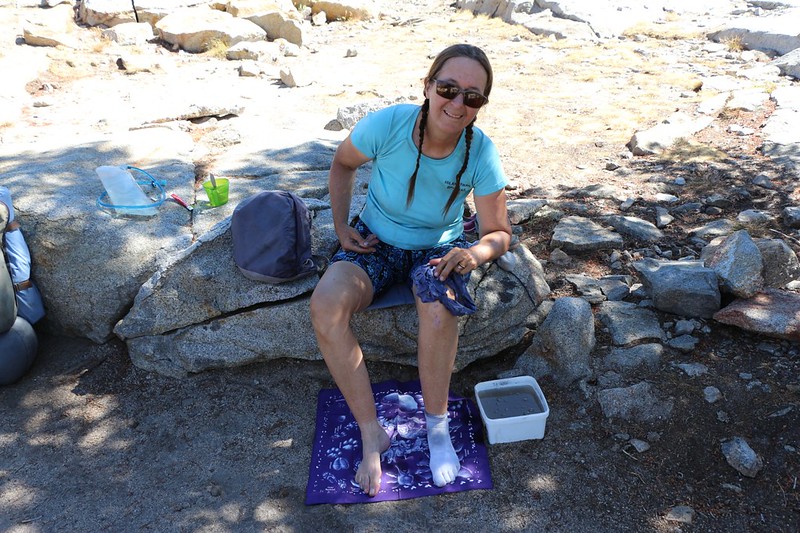 Vicki is working on our laundry at Middle Velma Lake – look how dirty that wash-water is!

We filtered water and ate dinner, then wandered around the area.  We saw our neighbors across the cove skinny-dipping in the lake, but we wimped out ourselves, even though it looked quite refreshing.  That lake water was way too cold for our style! 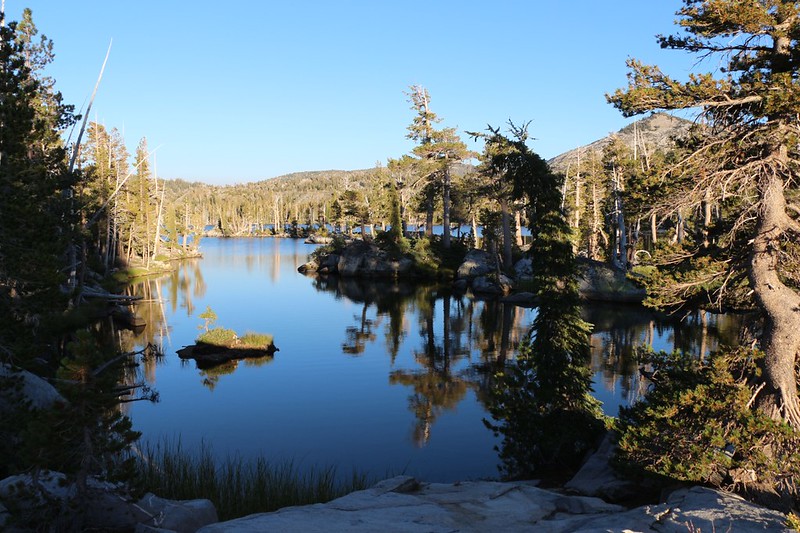 Evening reflections from our campsite on Middle Velma Lake

We hung out and watched the sunset and read our books.  We were in no rush to do anything, really.  And we knew that we could sleep late tomorrow if we wanted, as we only had about three miles to hike (uphill, of course) to reach our next camp at Dicks Lake.  Both of us decided that we made the right decision to come here today rather than hiking north from Rubicon Lake.  It had been an enjoyable day on the trail.