Day 5:  We climbed Jakes Peak from Rubicon Lake and looked down on Lake Tahoe from the summit

We woke up late and didn’t care.  It was our layover day, and we were going to enjoy every minute of it, whether sleeping, climbing a mountain, or lazying around in the sun by the lake.  Maybe we’d do all three. 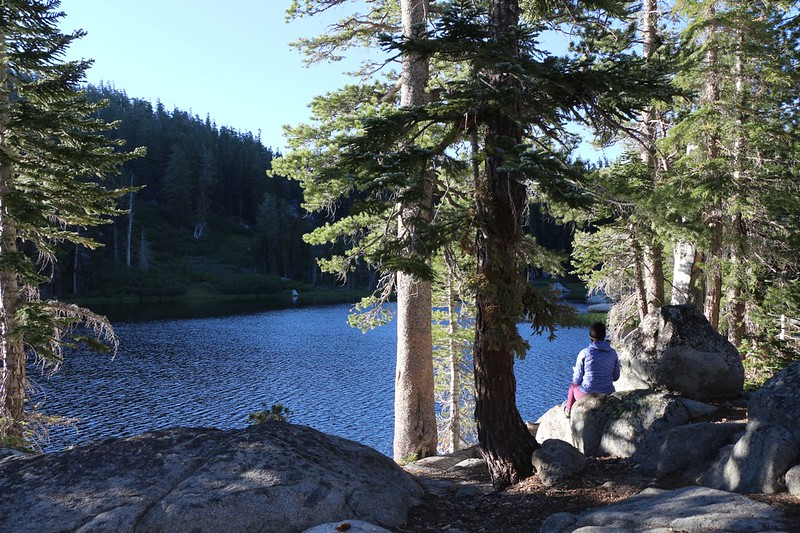 Eventually, we packed some water and a lunch and began our planned dayhike to the summit of Jakes Peak.  We crossed the outflow stream from the lake (the headwaters of Meeks Creek) and immediately began climbing directly up the western slope of the peak.  There was no trail.  I took a rough bearing using the GPS, and then we proceeded to ignore it and hike whichever way was easiest, generally following the “Rule of Up.”

We paused often, as it was quite steep.  The trees and ground cover were sparse enough that we didn’t have any trouble finding a good route.  Along the way we got a some views west toward our camp on Rubicon Lake, and also a few views north toward Stony Ridge Lake.  Our plan was to hike that way the next day, down the canyon, passing by several lakes.

Our hike was only a mile or so on the map, but it was longer when you added the vertical dimension.  We were breathing hard and sweating in no time.  But since we weren’t in a big rush, we took several enjoyable breaks along the way, sitting on fallen logs or granite boulders in the shade.  It was a fun hike. 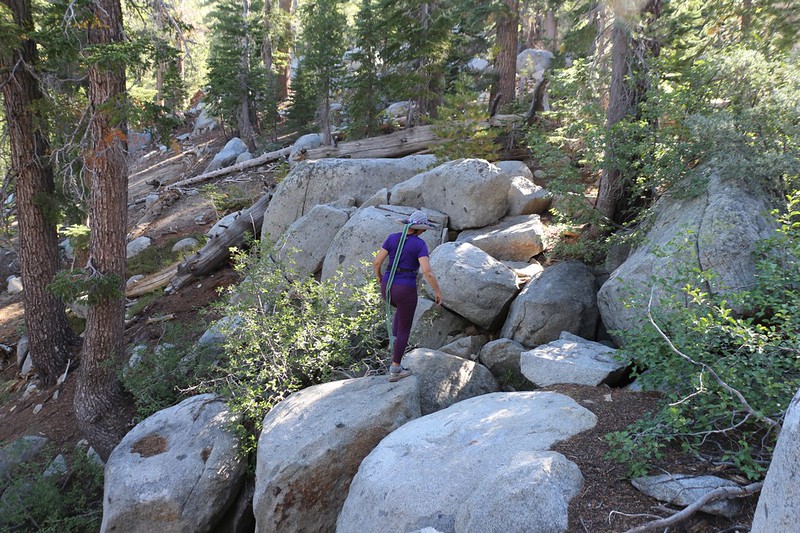 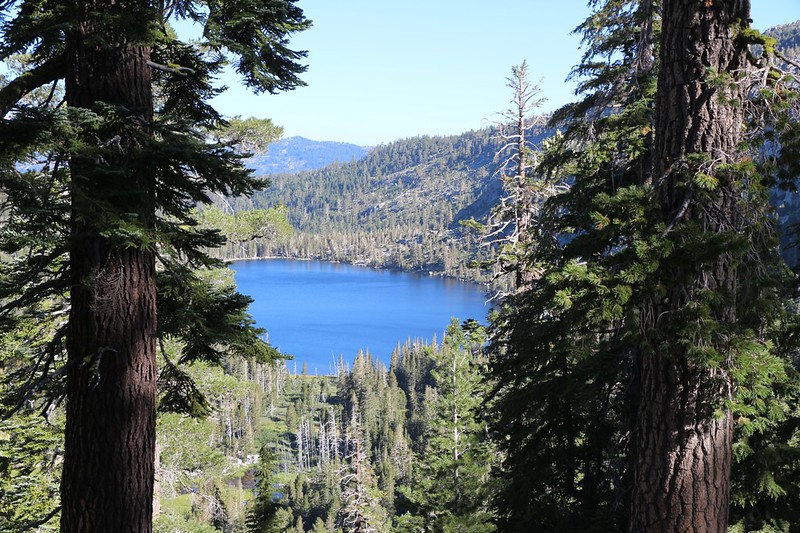 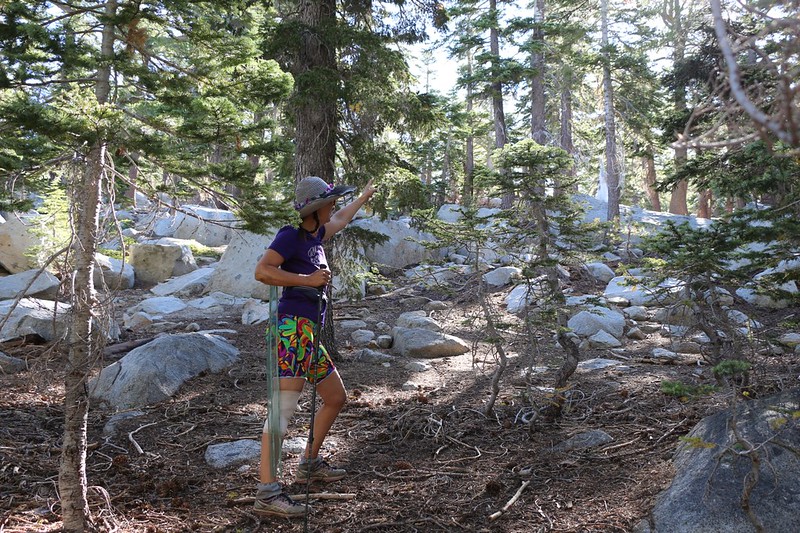 Vicki points Upward and Onward! as we headed cross-country up the steep slope 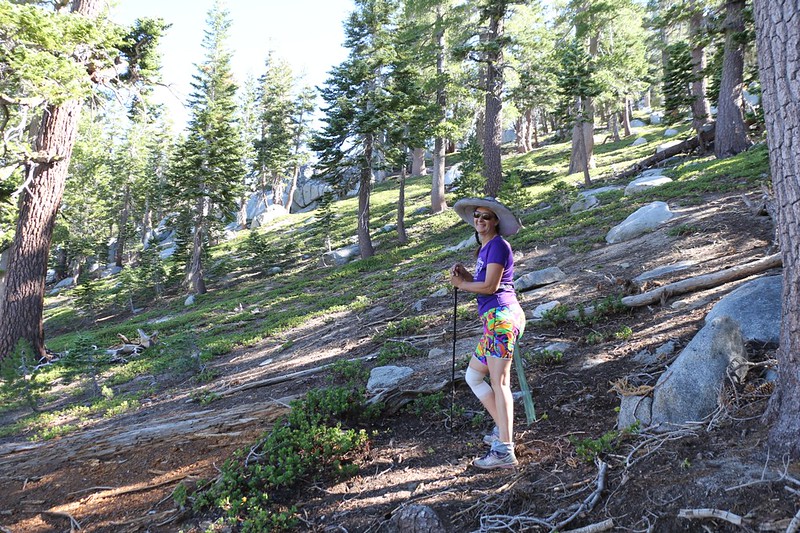 After an hour and a half of hiking and resting, with occasional glances at our location on the GPS to correct our course, we arrived at the summit of Jakes Peak.  And there before us was the distinctive granite summit block.  Amazingly enough, it still looked like a face, even in profile!  But it was the entire top of the mountain, just east of the block, that amazed us even more.  It was broad and bowl-shaped, with granite outcroppings ringing the bowl like a crown.  Within the bowl was deep, soft sand.  Vicki immediately decided to call this area Jake’s Beach. 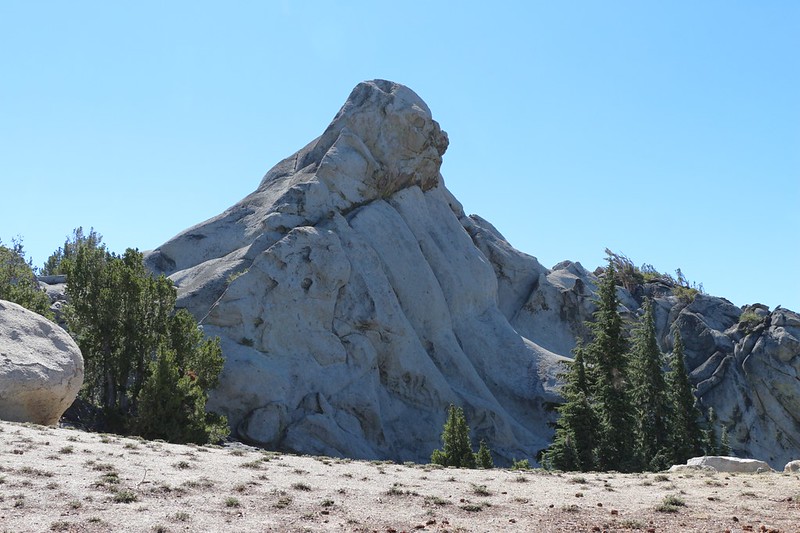 We wandered around the boulders, looking for an easy way onto the summit block, but in the end we decided that it was a bit too steep for us.  If I was still in my twenties I would have scrambled up that thing without hesitation  Or forethought, for that matter.  An injury up here would have ruined our whole trip.  We decided to behave responsibly, like the mature adults that we were.  In other words:  We wimped out.

But the views were great, mainly toward the west.  Phipps Peak was across the way above Rubicon Lake, and far in the distance was the Crystal Range and Lake Aloha, where we started our trek.  It was beautiful, and the only thing that could have made it better, photography-wise, were a few high clouds.  But we’d take blue sky any day over rain and mist.

Panorama west from Jakes Peak summit – Phipps Peak left of center, Rubicon Lake below it to the right

But the view to the west wasn’t the main reason that we climbed this peak.  We came up here to see Lake Tahoe.  The flat-topped nature of the peak made this impossible from the summit block, so we headed out across the loose sand of the “beach” and climbed up some of the eastern boulders.  That’s when we got the best views of all, and it really brought home the true size of Lake Tahoe. 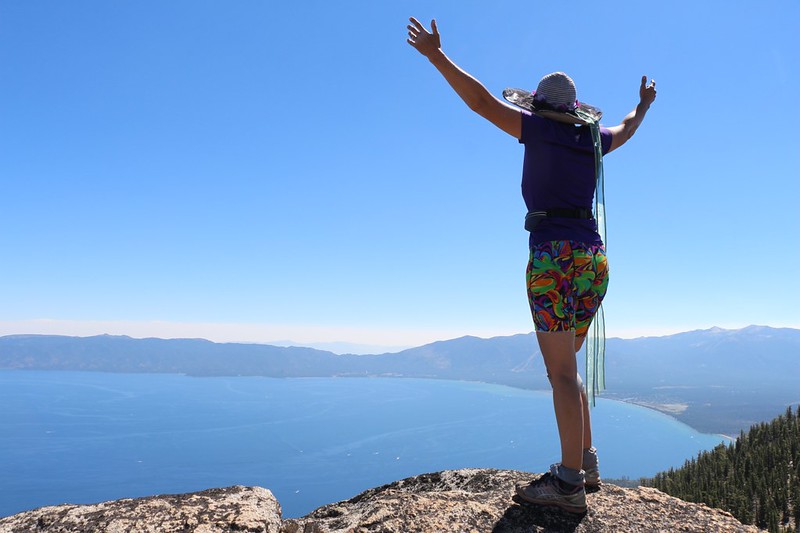 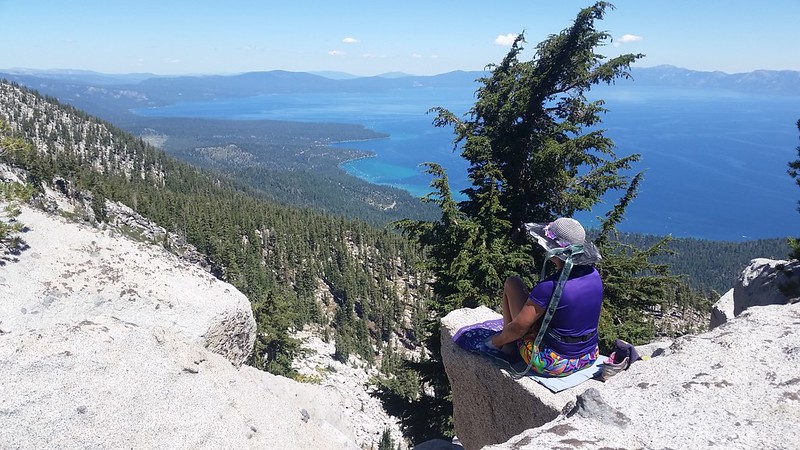 We ate lunch while enjoying great views of Lake Tahoe

We climbed here and there, and eventually stopped for lunch on a lofty granite perch.  In case you didn’t realize it, great views like this are the reward for the struggle of climbing mountains.

Although we wanted to stay up there forever, we knew that we’d have to head back “home” to our tent eventually.  Even if our most pressing appointment was an afternoon nap.  So down the steep slope we went, and the descent was much faster than the climb.  Before we knew it we were back in camp. 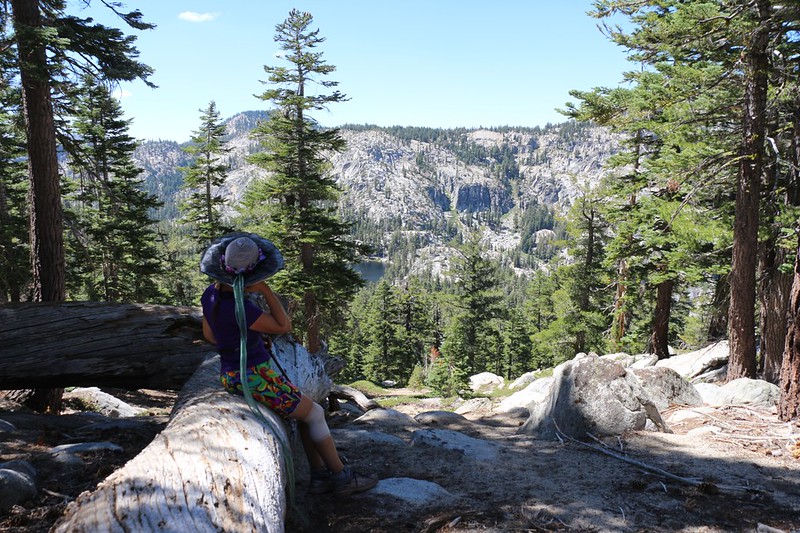 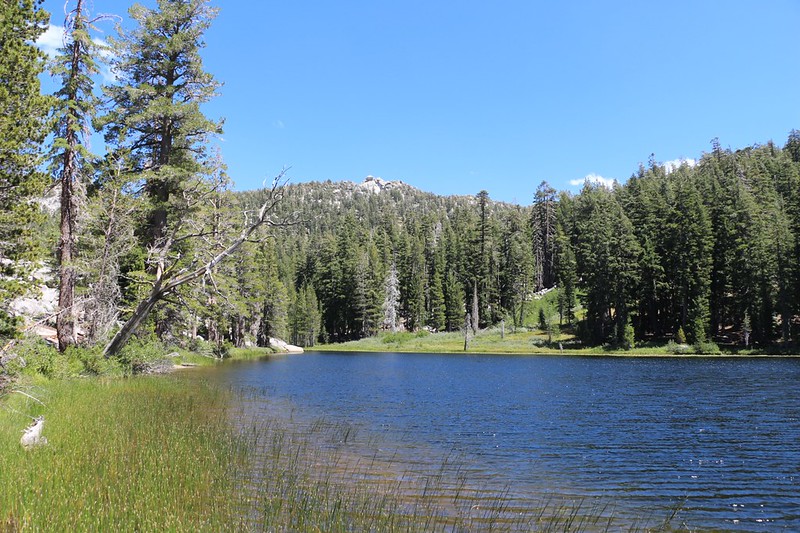 Suddenly, while we were hanging around relaxing, a large group arrived.  At least a dozen people!  Were they going to set up camp right next to us?  We certainly hoped not.  And would they be noisy?  But all of our fears were for nothing.  We struck up a conversation and discovered that they were on a multi-day Freshman Orientation hike from Sierra Nevada College.  Two upperclassmen were leading the trek, and the rest were incoming freshmen, just out of high school.  I was happy to see that there were several ladies in the group – we need more women in the wilderness.  And I made no secret that I was jealous of them, that I wished that I, too, could attend a college that had such an excellent orientation program.  Then they headed off toward the northeastern outflow stream, and proceeded to set up their camp, completely out of sight of our tent.  Perfect!

Soon after, Vicki and I got bored of sitting around, so we headed off around the west side of the lake,  We found another nice campsite along the shore, and continued south to the shallow, reedy end of the lake.  It was fun, exploring the lake’s perimeter.

When we got back to camp we heard some whooping and splashing sounds.  It was our new neighbors; several of them decided to take a swim in the lake.  One of the leaders had even brought a big inflatable shark to play with.  They swam all the way across the lake and climbed onto a large boulder.  Then they ran up the slope and jumped off into the lake, to applause from everyone on shore, including ourselves.  It was a great day to be out in the wilderness. 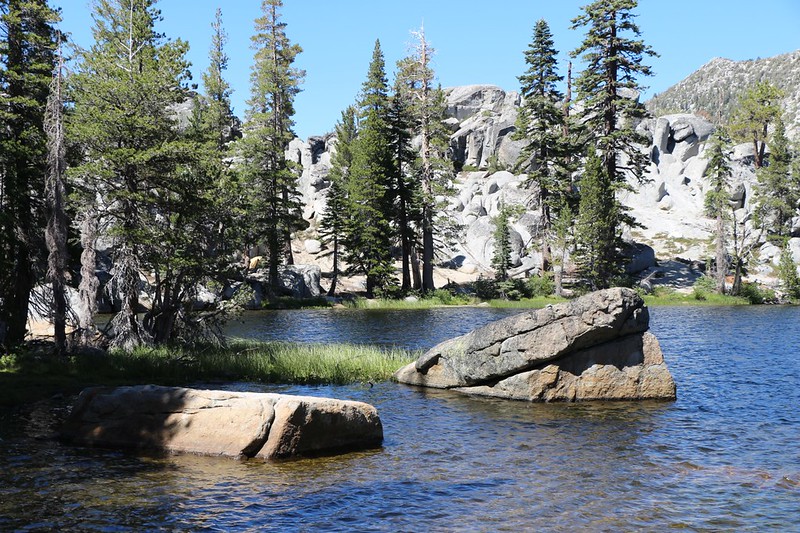 View toward our camp from the western shore

Panorama view from the reedy southern end of Rubicon Lake, with Rubicon Peak on the right 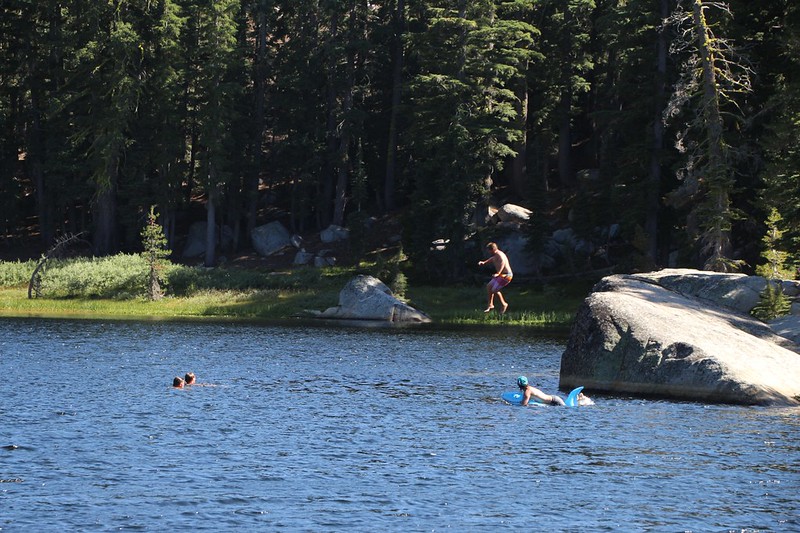 After that, things mellowed out considerably.  I filtered enough water for dinner, breakfast, and the next day’s hike.  We read our books in the shade, pausing every so often to gaze out over the peaceful lake.  Eventually, we ate dinner and took a short walk north to view the valley down below us.

I wasn’t sure that we should hike that way, although it was part of our original plan.  I was concerned about Vicki and her sore foot, and the long miles that such a hike entailed.  As the air cooled for the evening, we retired into the tent to get dressed, and then brought out the map.  I showed Vicki the proposed route and mentioned that the only important things were that we had fun, and that we arrived back at the car before our food ran out.  Our plan was to hike north to the Lake Genevieve Trail, then head west to camp near General Creek.  The following day we would join up with the PCT and hike south all the way to Dicks Lake, an eight mile day.  This was the deal-breaker.  We knew from the previous day’s hike that the PCT mostly traveled through forest in that section, with essentially no water and no views to speak of.  This seemed boring, and we knew that we’d enjoyed the trail along Phipps Peak enough to do it again.  We also loved our camp on Middle Velma Lake.  So we decided to head directly back there tomorrow, retracing yesterday’s hike.  The following day, we’d hike an easy two miles or so to Dicks Lake.  So that’s what we decided:  To head back the way we came, without doing another big loop.  And that was OK with me, too.

Then we went outside and watched the lake as the sun set, and finished our layover day in peace.