Day 4:  We hiked from Middle Velma Lake to Rubicon Lake via Phipps Pass on the Tahoe-Yosemite Trail

We woke up early to a fine sunrise, but realized that it was beautiful primarily due to a long trail of high clouds and smoke streaming eastward from the Donnell Fire off to the south.  We had seen the clouds building the day before, and immediately got a bit nervous.  So I texted my daughter using our InReach device, asking her to check and see if there were any new wildfires west of the Tahoe area, and that I already knew about the Donnell Fire, which was far to our south and no danger to us.  She replied later that night that there were no other fires nearby, so we rested a bit easier and simply hoped for the best.  The forests of California needed a big dose of rain, but we knew it wouldn’t happen.  The weather was expected to remain clear for the foreseeable future.

Sunrise on Middle Velma Lake, with smoke clouds from a wildfire far to the south of us

We ate a no-cook breakfast (we had several of these with us, to save time when we wanted to bug out early) and got packed and on the trail right away.  We only had five miles or so to hike, but the trail went up and over a pass along the way, so getting that over with before the heat of the day seemed like a good idea to Vicki, who doesn’t tolerate heat very well.

So we headed back out to the PCT and hiked north for about a mile, at which point we made a right turn onto the Tahoe-Yosemite Trail.  I read more about it after we came back home.  This is the only section of the 180-mile proposed trail that is still named this way on the map, as most of it was absorbed into the PCT over the years.  It was begun over a hundred years ago, back in 1916.  So we were hiking on a piece of history, but we didn’t know it at the time.  But we could tell that it was well-built, and we really enjoyed being on it.

Luckily for us, most of the day’s climbing happened within a shady forest of tall pines.  It was cool and peaceful in there.  Vicki took a nap about halfway up and I got to read my book for a while. 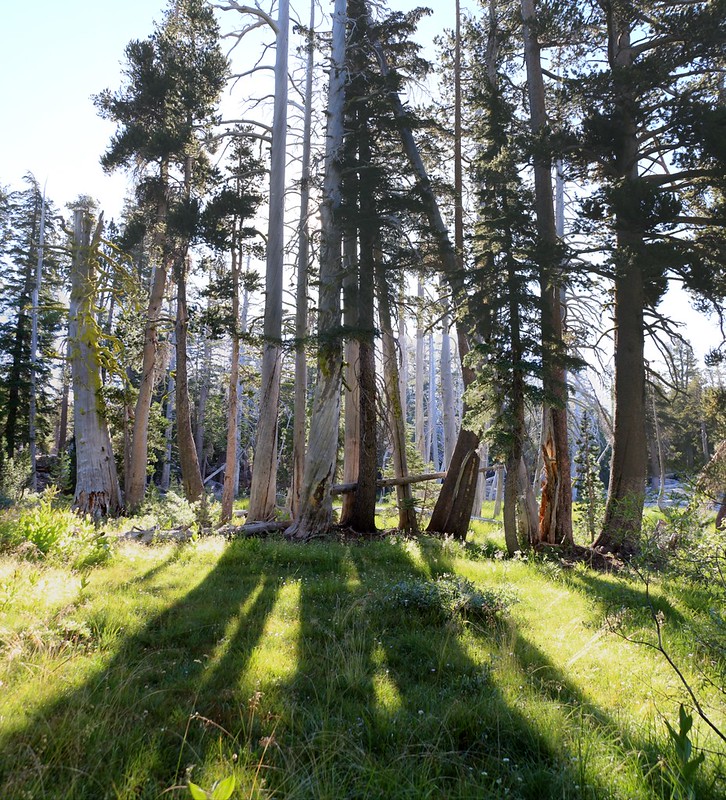 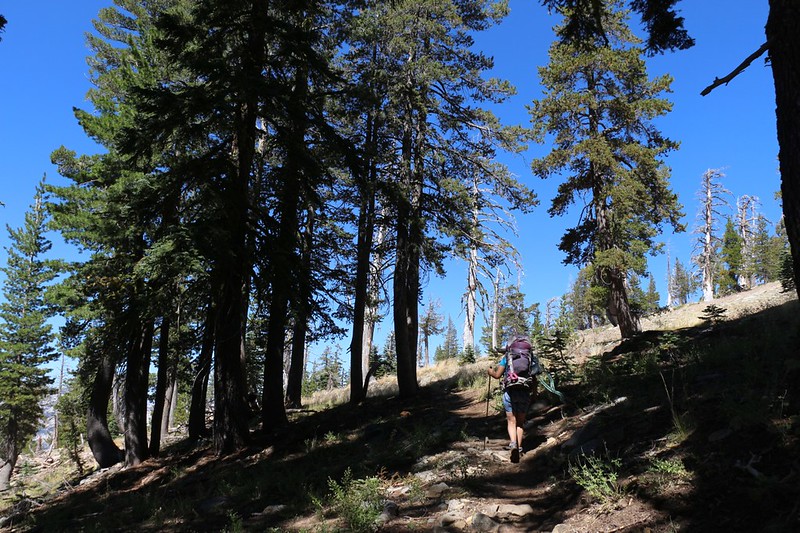 Eventually, the trail broke out of the trees and the views really opened up.  We were above 8500 feet elevation, and we could see a long way to the west, down into Rockbound Valley where we hiked yesterday, and also the Crystal Range on the far side of the valley.  The trail followed along just below the western ridge of Phipps Peak, and we decided that we wanted to see what was hiding to the north just beyond it.  So we put down our big packs and got out some lunch, water, books, and butt-pads, then headed up the slope.  And it was well worth it.  From there, we could see north toward the Rubicon Reservoir and there were many other distant mountains, far off in the haze.  Down below us was a shallow pond along Phipps Creek, although its source, Phipps Lake, remained hiding around the corner behind the peak.  But we didn’t care.  It was beautiful up there.  And a perfect spot for lunch.  Yes, these are the times that make backpacking out in the wilderness the great thing that it is, and what keeps us coming back for more. 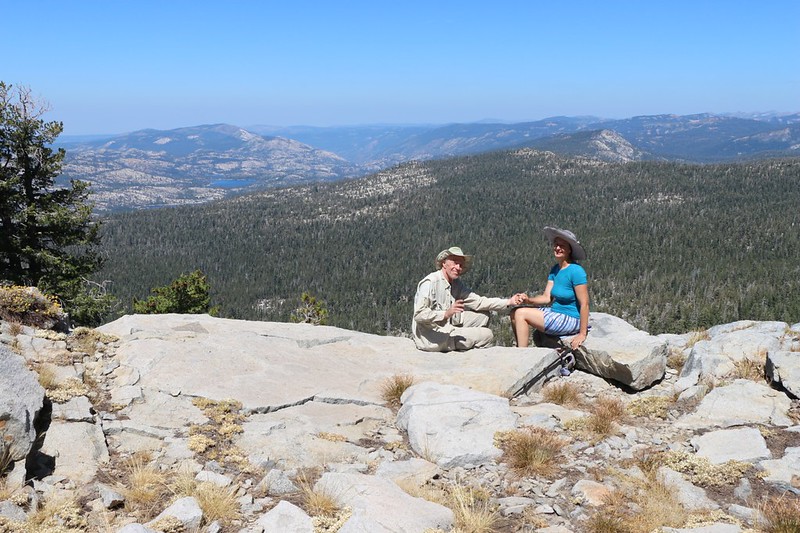 After lunch, we followed the trail as it looped around the mountain.  It didn’t gain a whole lot of elevation, but the views kept changing continuously, as we shifted our focus from the west to the south, and eventually the east.  The trail stayed at 8800 feet, but Phipps Peak was up there above us at 9234 feet elevation.  It looked like a hot and sweaty climb in the sun.  We didn’t bother to attempt the summit as we already had great views right where we stood.  The Velma Lakes were down below us, and Mount Tallac and Dicks Peak were off to the south.  I pointed them out to Vicki and I used my GPS to discover which low spot on the ridgeline was Dicks Pass.  We would be climbing over that pass in a few days. 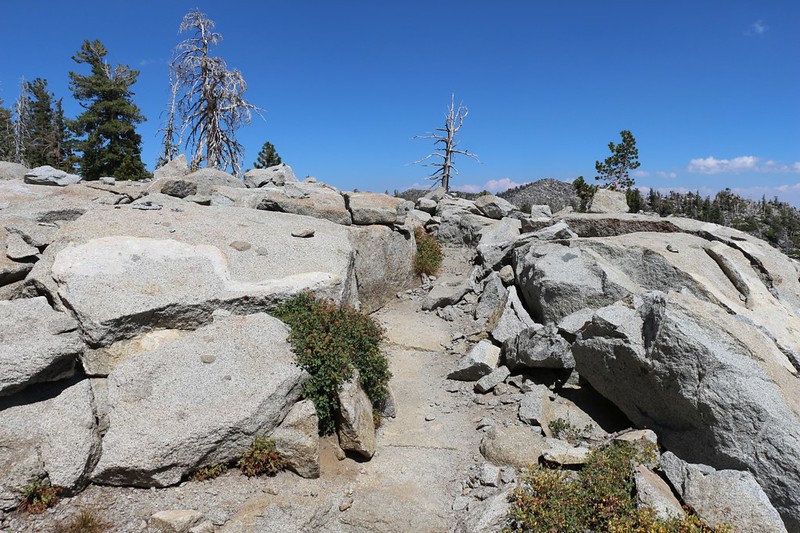 As we continued around the mountain, the views kept changing, and eventually we ended up hiking directly northeast toward Phipps Pass.  The trail followed along slabby granite ribs, carved by the original trailsmiths to make it safer for both horses and men during the icy weather.  The mountain sloped steeply below us to the right, over potentially deadly cliffs, so this was a true lifesaver.  But the cliffs also made for yet more excellent views.

We met the first people we’d seen all day at Phipps Pass.  We spoke for a while, and they assured us that there was plenty of water at Rubicon Lake.  I was feeling a bit nervous, as we hadn’t seen a drop anywhere since the outlet stream from Middle Velma Lake.  I ended up feeling foolish later on, because Rubicon Lake was quite large, and deep, and it wasn’t about to dry up during my lifetime.

As we hiked on, beyond the pass, a whole new vista came with the territory.  We could see the Grouse Lakes down below us, and even the deeper blue of Fallen Leaf Lake, further down the valley.  Across the way to the east was a range of peaks, including one with a bald rocky summit named Jakes Peak.  Rubicon Peak, which we planned to climb the next day, was further along the ridge to the north. 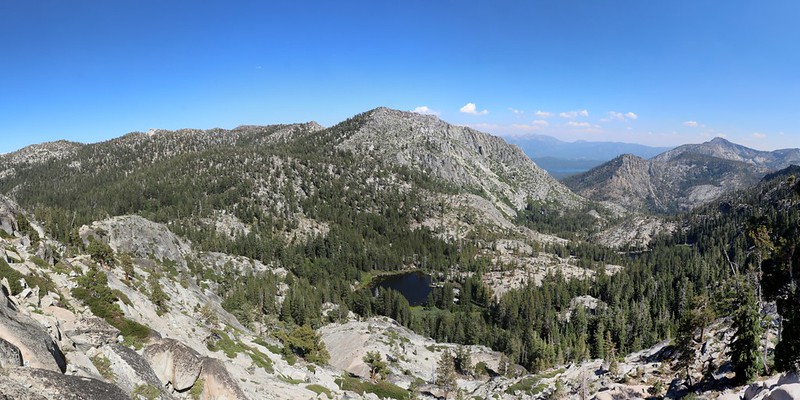 Panorama looking east with the Grouse Lakes below us, Fallen Leak Lake is in the distance. 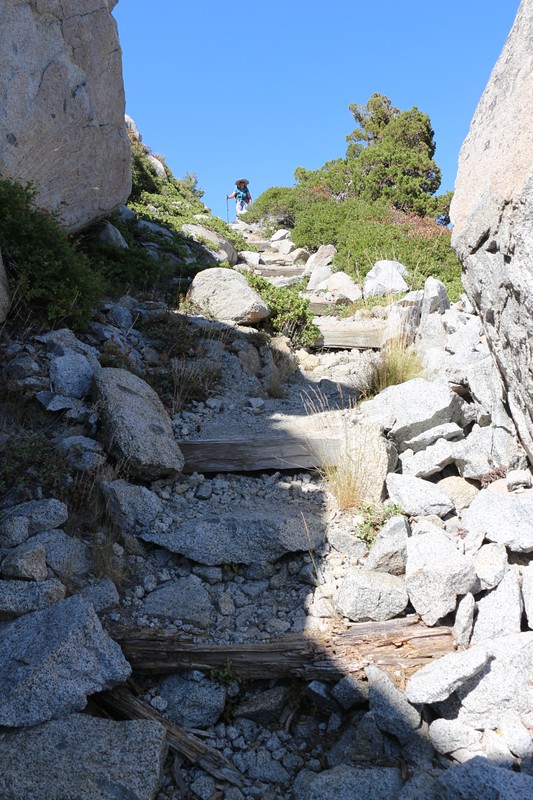 Down and down we hiked, zig-zagging along the steep granite slabs of Phipps Peak.  We crested the headwall above the Grouse Lakes and continued downhill through dense forest.  And then, suddenly, Rubicon Lake appeared below us.  It was large and deep and blue.  Beautiful!  It was quite a relief to get there.  We headed down to the shore and took off our packs for a well-deserved break.

We get our first view of Rubicon Lake

Rubicon Lake from the trail as it follows the western shoreline

Vicki’s foot was pretty sore after that steep rocky downhill section, so she sat down by the water while I wandered around the north end of the lake looking for a good spot to camp.  It didn’t take long as there were plenty of spots.  I hadn’t been sure what I might find here when planning this hike back at home using only satellite imagery, so I was pleasantly surprised.  The lake was gorgeous and the campsite was flat and sandy, with several pine trees for shade.  It’s hard to ask for more than that. 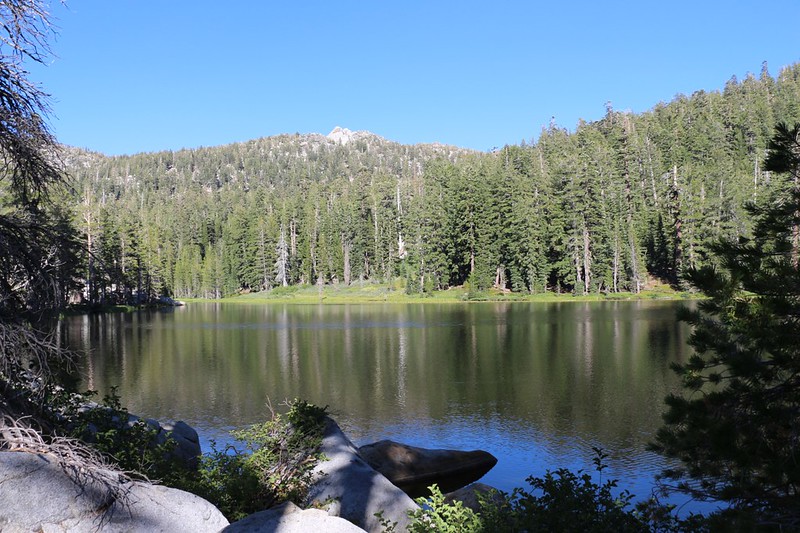 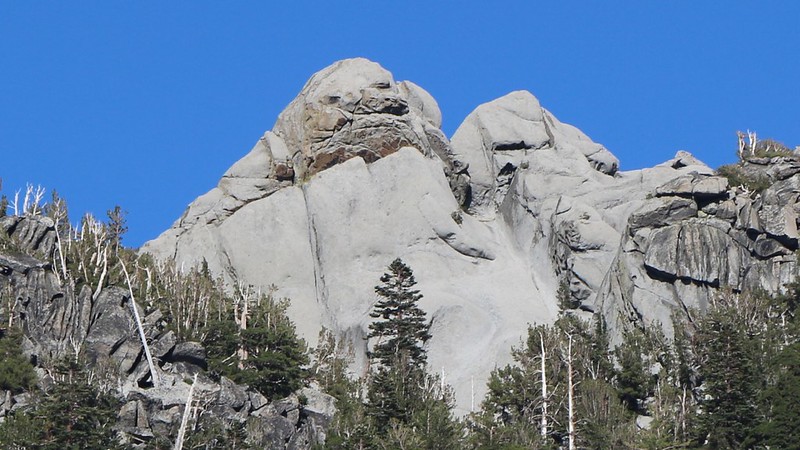 We set up camp and filtered some water.  The usual stuff.  It was still hot, so instead of taking an afternoon nap, we got out the map and decided on our plan for tomorrow, our “layover” day.  We intended to stay two nights here, and spend an extra day climbing a mountain.  But which one?  I had originally planned to summit Rubicon Peak, mainly because we’d already hiked along the Rubicon River and camped here at Rubicon Lake.  “Rubicon” would thereby become our theme for this ten-day trek.  But Vicki’s foot changed things a bit.  There was quite a bit of off-trail cross-country route finding involved in getting to Rubicon Peak from here.  Normally this would have been fine, providing us with fun and adventure, but not now.  So we set our sights on the nearest one, Jakes Peak.  We could see the summit from our campsite, in fact.  At 9187 feet elevation, it was a whopping four feet higher than Rubicon Peak!  So we weren’t wimping out on the climbing, just the distance traveled.  And the view from the summit looked to be almost identical.  So we changed our plan once again.  Then we took our afternoon nap. 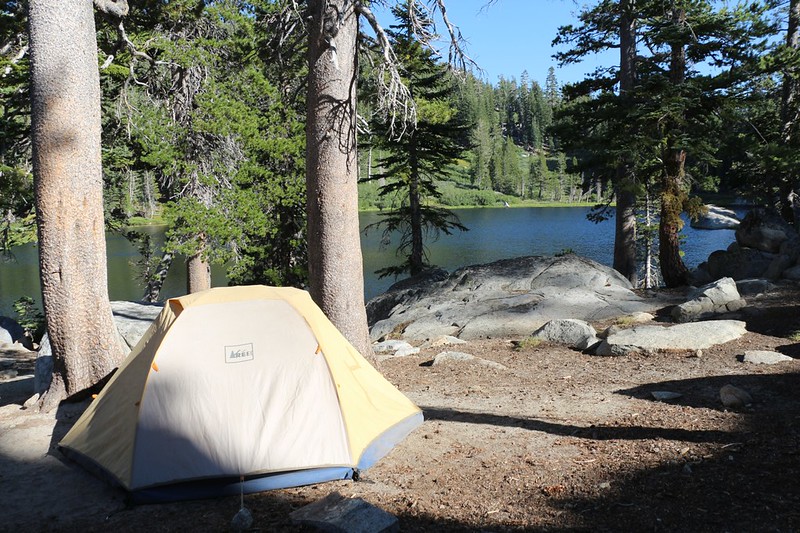 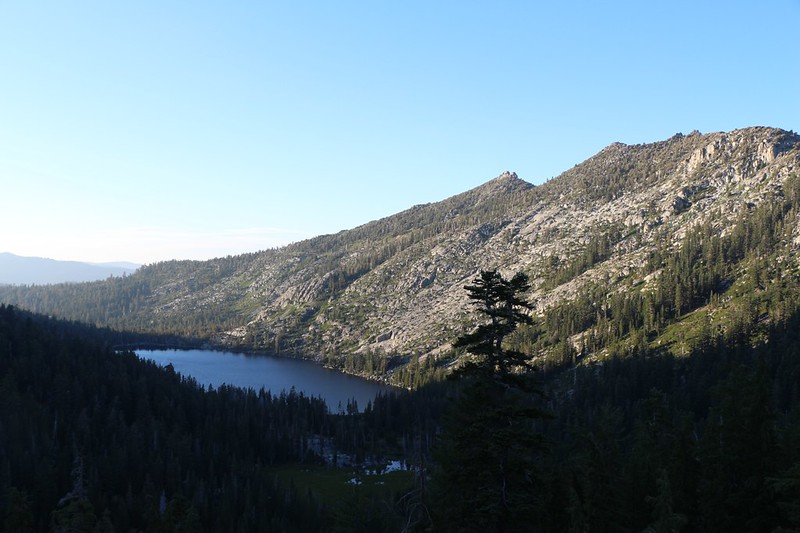 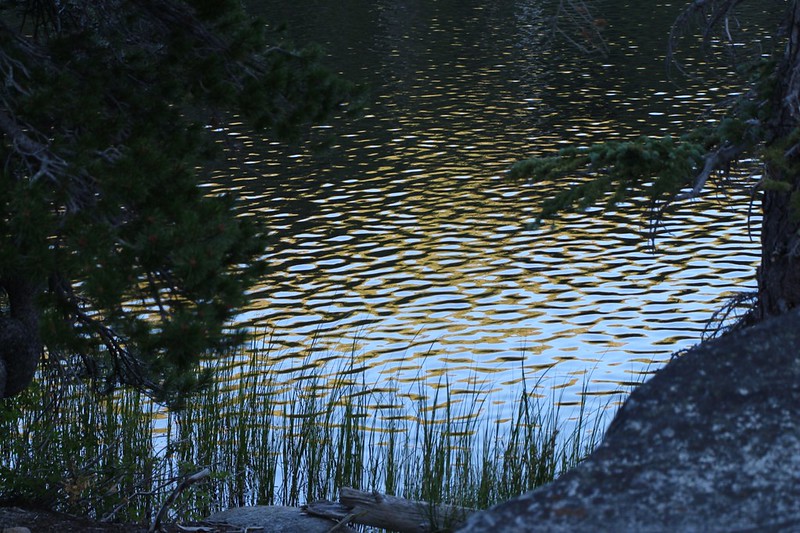 Evening reflections on the wavelets on Rubicon Lake

As evening approached and the sun descended behind Phipps Peak, we ate some dinner and explored the nearby area.  We walked down to the outlet of the lake, a swampy, reedy cove where Meeks Creek began.  We heard frogs croaking as they began their nightly rituals.  Then we climbed up the granite ridge just north of the lake, where we were rewarded with excellent views north into the Meeks Creek Valley.  Stony Ridge Lake was twinkling down below us.  The trail continued down the valley, and we planned to hike that way two days from now.  Then we headed back to camp.

We were both really happy about the day’s hike.  The Tahoe-Yosemite Trail, traveling high along Phipps Peak, had been extraordinarily beautiful, The weather was fine, the views were superb, and our campsite along the lake was perfect.  And we expected to have another great day tomorrow.  Life was good.