Day 3:  Hiked from the Rubicon River up to Middle Velma Lake on the Velma Lakes Trail

We woke up a bit late and enjoyed the calm morning near the beaver dam, eating breakfast with a fine view over the still waters of the river.  A family of ducks swam by and a fish jumped in the distance.  Very mellow.  Then we packed up and got ourselves ready to hike. 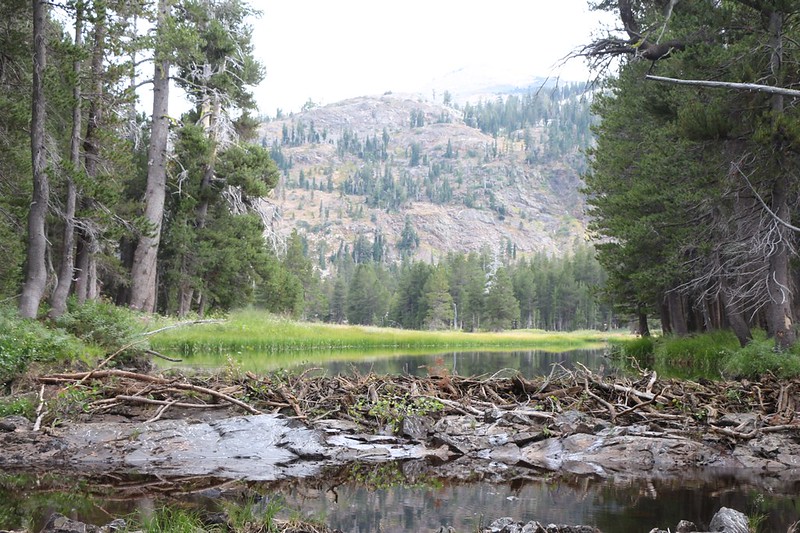 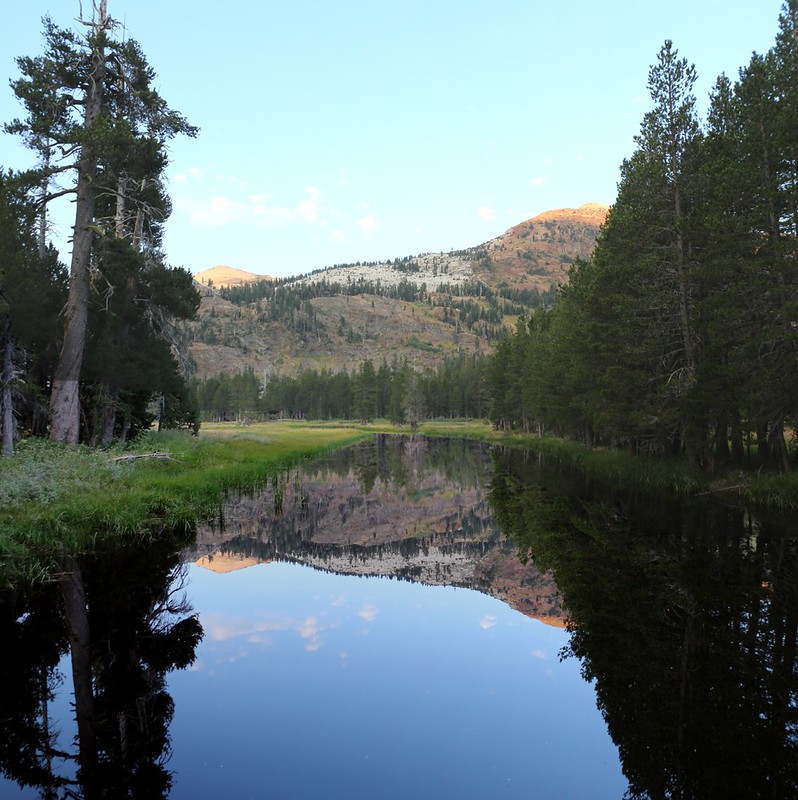 Dawn reflections and alpenglow on the Rubicon River

We had about two and a half miles of easy downhill hiking ahead of us on the Rubicon Trail, and we moved right along.  There wasn’t much to see except grassy meadows and pine forest, with an occasional approach to the river.  There really wasn’t much water in it, to tell the truth, just a trickle flowing, with numerous still pools nestled in the smooth granite of the stream bed.  Sometimes it even disappeared into piles of loose stones only to reappear downstream where the bedrock came back to the surface.

The only time we had an issue with mosquitoes the entire trip happened that morning, when the trail entered the dense growth along the outlet stream from Lake Lois.  We were thinking about filtering some water there, but soon gave up on that idea, as they descended upon us with a vengeance.  They were far more thirsty than we were.  We only trade blood for water when we absolutely have to!

A mile or so later the Rubicon Trail intersected with the western end of the Velma Lakes Trail, and we turned right, heading downhill to the crossing of the Rubicon River.  We found a nice spot in the shade near the stream and took off our shoes.  Then we sat and ate some snack while cooling our feet in the water.  It was a great spot for a break. 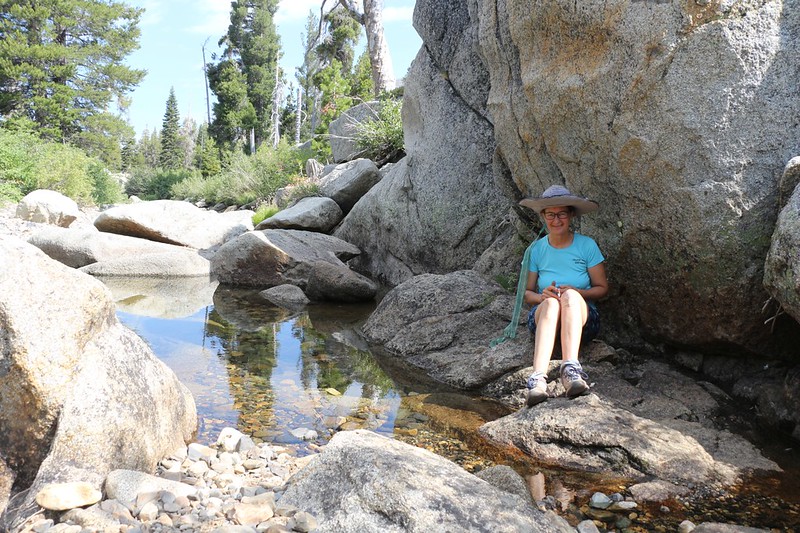 I filtered a bit of water and then we began the difficult section of the day’s hike, climbing 750 feet over a distance of two miles, until the trail intersected the Pacific Crest Trail near the shore of Middle Velma Lake.  The first part was the steepest, as we hiked across bare granite slabs under the hot sun.  We took short breaks whenever we found a shady spot under one of the rare pine trees.  That’s when we turned around and took in the views, and enjoyed a bit of breeze.  The northern part of the Crystal Range was across the valley to the west, and far downstream to the right were hazy lakes and distant peaks.

The trail grew less steep as it climbed higher out of the valley.  Soon enough the hot bare granite gave way to cool shady forests.  The views were gone but it sure was easier to hike.  Along the way, Vicki stopped for a nap.  I got out some lunch and read my book while she slept.  Thus far, we’d only met three people all day, and I knew that there’d be plenty more up ahead when we hit the PCT and the lake.  So we enjoyed our solitude while it lasted. 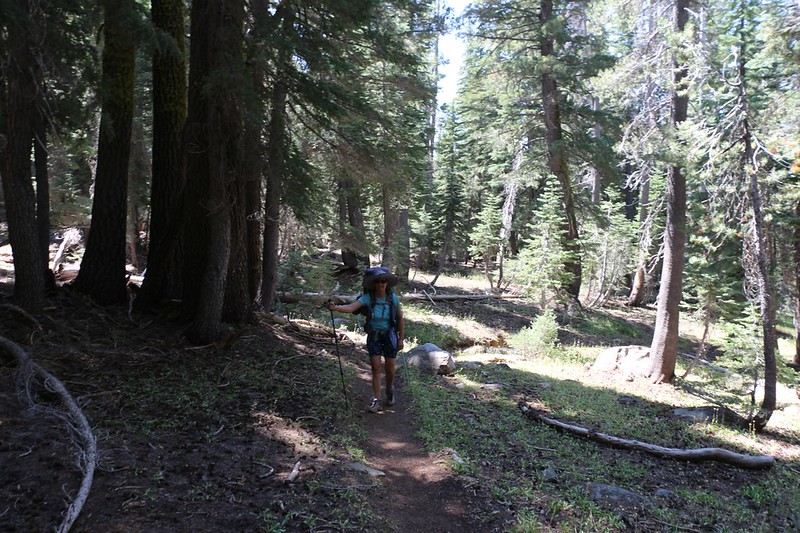 It was only 1:30pm when we arrived at Middle Velma Lake.  It was probably just bad timing, but almost immediately we were inundated with people, as several large groups of hikers passed us by in both directions.  We stopped long enough to take a few photos, and then headed a bit north along the shore, then left the PCT behind, following the edge of the lake in search of a good campsite with a bit of solitude. 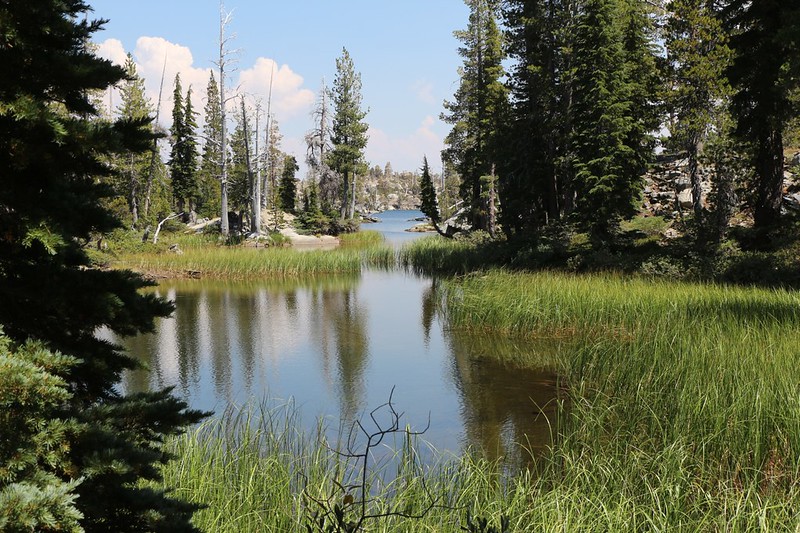 There was a “Use” trail along the shore, and we walked only a short way before Vicki decided to stop.  Her foot was hurting far too much to carry a big pack much further, aimlessly wandering in search of the “perfect” camping spot.  If one even existed.  So I told her to sit down with the packs and take a break.  I would find a good spot, hopefully far away from other noisy campers.  And that’s what I did.  I wandered all along the western shore, winding along around several coves and I even discovered a small dam that raised the level of the lake by several feet.  There were a number of nice spots here and there, but almost all of them were in full sun.  Taking a nap in a hot tent didn’t sound very enjoyable.  Still, I marked them as waypoints on my GPS and headed back to Vicki. 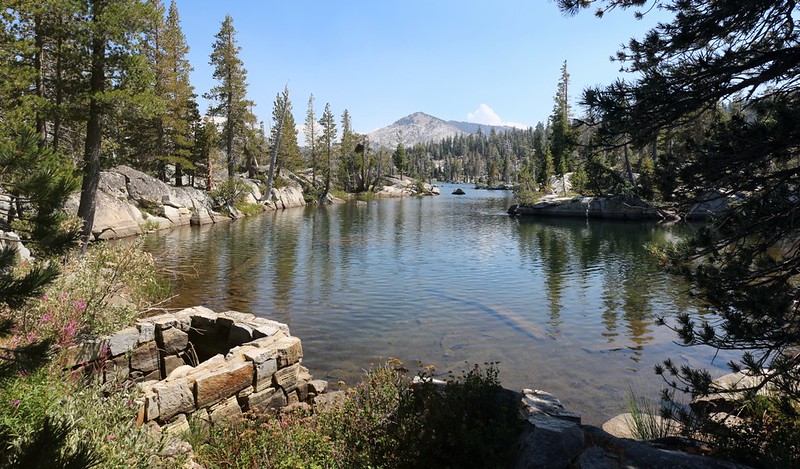 Panorama video of Middle Velma Lake from the northwest shore

One camping spot in particular caught my fancy, mainly because it had some afternoon shade and was a bit further from the PCT.  Vicki liked it, so we began setting up camp immediately.  I got the air mattresses inflated and Vicki took a long nap in the tent with the doors wide open to let in a bit of afternoon breeze off the lake.  I read my book lying next to her and eventually took a short snooze of my own.  It was a mellow day in the wilderness.

When we woke up there was still plenty of daylight left, so Vicki decided that it was time to get some laundry done.  After three days of wearing the same sweaty, stinky clothes, we were overdue for cleaning.  Vicki soaped each piece by hand and I wrung them out, then we rinsed each piece by hand, twice, followed by more wringing.  This is laundry from the days of yore.  Hard work, indeed.  Then we strung a clothesline between two trees in the sun and hung everything up to dry.  Warmth and a good breeze had everything bone dry in an hour or two. 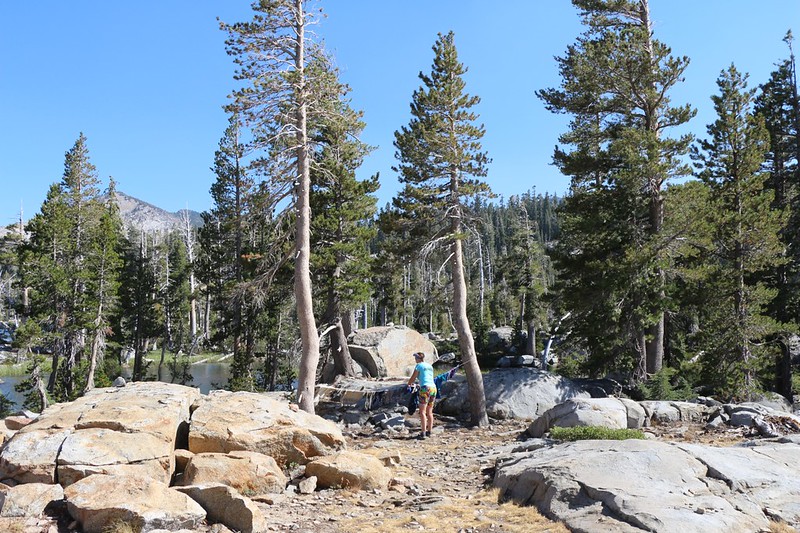 We filtered more water and ate an early meal.  Then we took our after-dinner constitutional.  I showed Vicki the cool old dam and sluicegate, and we generally strolled around the area.  Her foot was still hurting so we didn’t overdo it.

The view of Middle Velma Lake from our own private cove near our campsite, complete with tiny islands 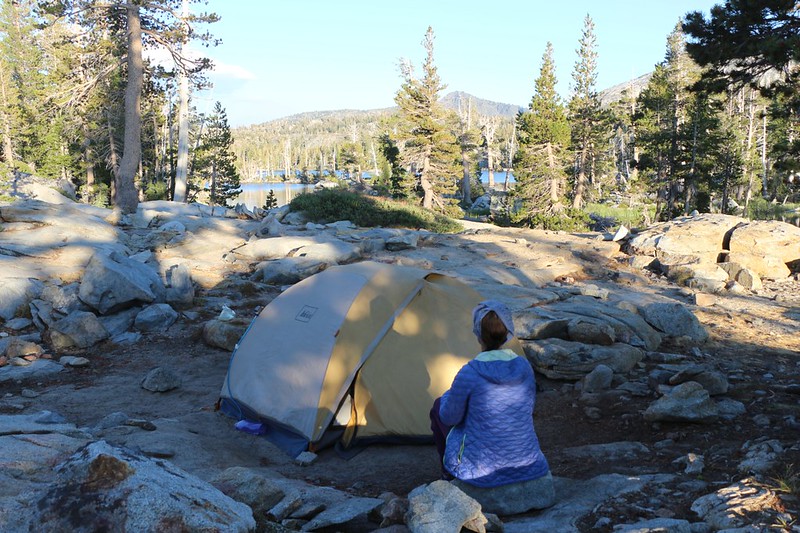 Our tent and campsite on Middle Velma Lake

We decided that Middle Velma Lake was a great place to camp.  We were really glad that we’d changed our plans and camped up here.  Tomorrow we were going to climb one thousand feet to Phipps Pass, then on to Rubicon Lake, and Vicki wanted to get the climbing part done in the early morning before the weather got too hot.  So we spent the rest of the afternoon just lounging around camp reading our books, and as evening approached we were already inside the tent, cozy in our sleeping bag.