Day 2:  We backpacked from Lake Aloha over Mosquito Pass to the Rubicon River Valley

We woke before dawn to cool temperatures and a clear sky.  There was a golden alpenglow shining on the Crystal Range, and the color was being reflected in the smooth waters of the lake.  I took a few photos while the magic moment lasted, then headed back into the tent to begin packing up our gear.  Vicki was still inside, sleeping.  I snuggled back into the sleeping bag and joined the slumber party.  So much for an early start.  An hour or so later she began getting dressed in layers for the day.  Then she headed out for breakfast while I tended to the gear, our usual division of labor.  We didn’t leave camp until a bit after 8am.  But that was OK:  We were on vacation.

We started the long trek north along the shore of Lake Aloha.  It went on and on.  And I’d love to say that the trail was nice and flat, but it wasn’t.  That glacially-polished granite was as wavy as could be.  We went up and down, again and again.  It was a deceptively large lake.

Panorama and reflections on Lake Aloha with Pyramid Peak and Mount Price. Mosquito Pass is the low spot on the far right.

After an hour or so we reached the trail junction at the northern end of the lake.  This was where the PCT headed east toward Heather and Susie Lakes, and the Rubicon Trail headed first west, then north over Mosquito Pass.  We took off our packs for a longer rest and climbed up on a granite outcropping.  We ate some snack and enjoyed the views.  Several groups hiked past us, but all were on the PCT.  Nobody was heading south from the pass.  And that’s the way we liked it.  A week or so from now we’d be heading back via the PCT, but not now.  It was time to hike out into the lonelier wilderness and avoid the crowds. 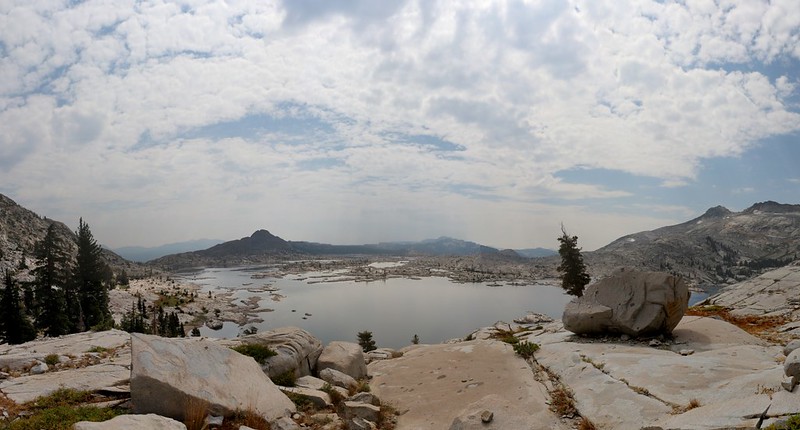 Vicki had been worried about the big climb over the pass, until I mentioned that it was only a 300 foot ascent.  That’s barely a hill to us.  This made her much happier.  And so we climbed higher into the tree-filled valley that led to Mosquito Pass, and we were glad of the shade it offered.  In no time at all we were at the summit, and able to enjoy new vistas to the north over the Rubicon River Valley.  We took a break and ate some lunch up there, reading our books and studying the map.  I pointed out a meadow far down the valley and mentioned that that might be near the spot I’d planned for tonight’s campsite.  We’d see how we felt when we got there.

After that, we hefted our packs and began the 900 foot descent into the valley.  It was named “Rockbound Valley” on the map, possibly because of Rockbound Pass, where another trail left the valley to the west.  The trail itself was steep and rocky, with many large steps.  This was tough on Vicki’s sore foot, as well as her knees, but she was glad that we weren’t heading uphill on this trail.  We passed by Clyde Lake and continued downward for about a mile and a half.  We were running low on water by this time, and we noticed that nearly all of the streambeds were dry.  I was kicking myself for not getting some water from Clyde Lake, but it was too late for that now.  We’d have to hope that there would be water in the main Rubicon River down below where the map showed the trail crossing it. 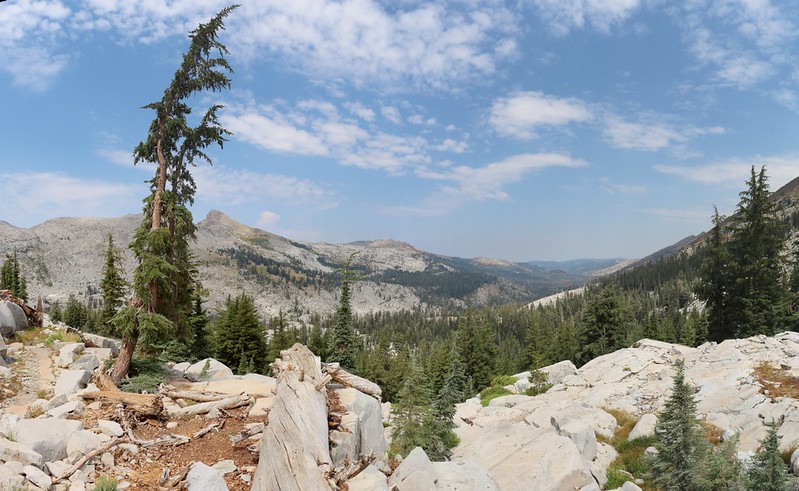 The view north down Rockbound Valley from Mosquito Pass 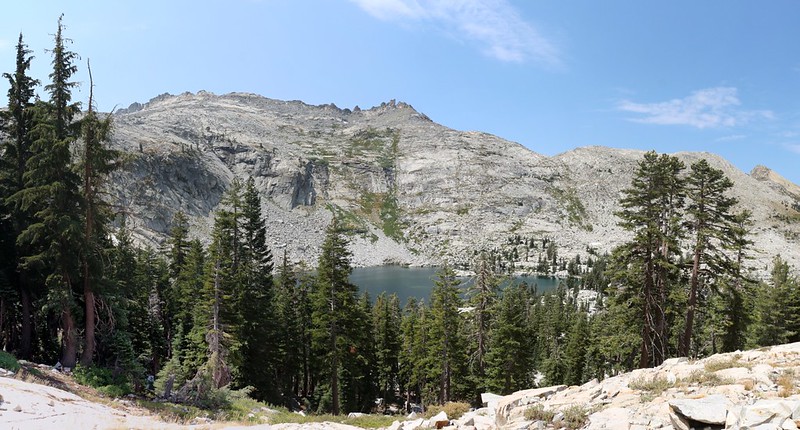 Eventually, we reached the valley floor and were relieved to find some water in the river.  It wasn’t flowing fast, but it was flowing, and there were plenty of deep pools.  This seemed to be a popular resting spot, as there was a group hanging out, finishing their lunch when we arrived, and there were several obvious camping spots nearby.  Vicki and her foot were pretty whupped at this point, so we set down our packs and Vicki began one of her famously long naps.  Meanwhile, I filtered a modest amount of water.  The people we’d met had told me that the river still had water here and there down below us, although it wasn’t flowing very well.  It turned out that 2018 hadn’t been the best year for snow up here, after all.  After that, I lay down next to Vicki and read my book for awhile.  It was very peaceful there. 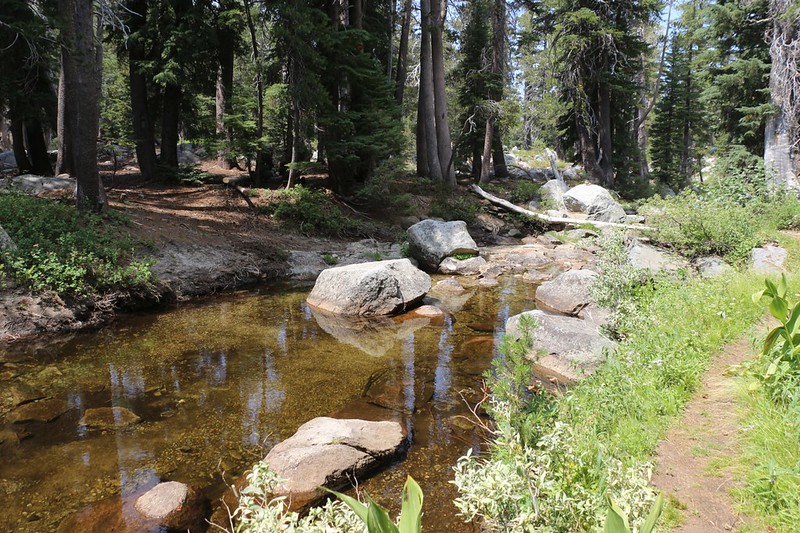 We continued north, with plenty of easy hiking along the relatively flat valley bottom.  The river meandered back and forth while the trail stayed on the west side for a while.  We noticed some dark cumulus clouds building up in the east over Dicks and Jacks Peaks, and wondered if we were going to get a soaking later on that afternoon.  Typical Sierra mountain weather.  We couldn’t do anything about it except keep on hiking, hoping that we found a good camping spot before the rain started.

Panorama of storm clouds over Dicks and Jacks Peaks

The trail crossed the river again just south of China Flat, a large meadow shown on the topo map.  This, probably, was the meadow we’d seen earlier, back on top of Mosquito Pass.  And it also looked like we might find a campsite nearby.  So we kept our eyes peeled for a good spot not too far from the river. 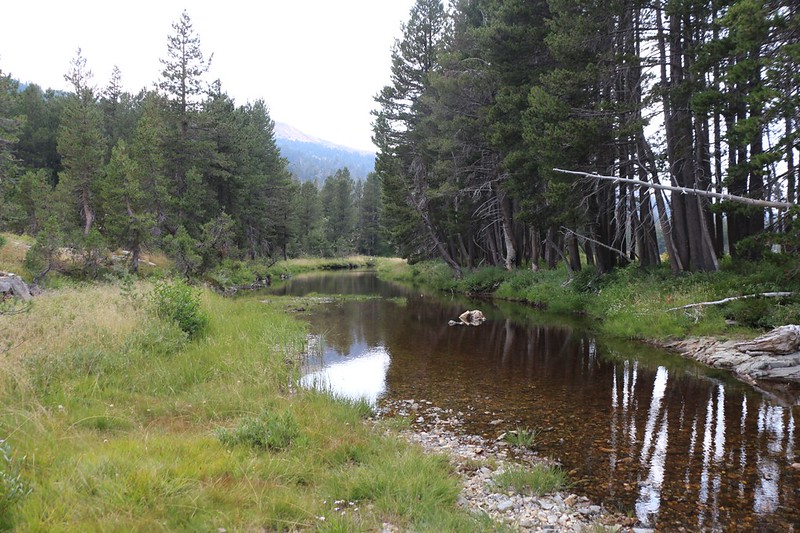 I saw a good spot near the river just north of the flat, but Vicki decided that it was too close to the water, and she urged me to keep hiking.  So hike we did, while the clouds got darker and the land less conducive to camping.  It was all broken up and covered with dense scrubby pines.  The trail crossed the river again, but there weren’t any good spots nearby,  So I put down my pack and left it with Vicki, then hiked north as fast as I could, hoping to find something decent.  I came to the trail junction to Rockbound Pass, and there was a lovely sloping meadow, but no flat spots for a tent.  Then it began to sprinkle, and there I was, with no raingear and an expensive camera around my neck about to get destroyed in a deluge.  That was too much for me.  I turned around and ran back to the packs, where I found Vicki already wearing her rain suit.  I took out my jacket and put it on, but didn’t bother with the pants as it wasn’t raining hard yet.  I told her how dismal it was up ahead, and that I really wanted to hike back to that nice spot by the river.  She reluctantly agreed, and we hiked on back toward China Flat.

Along the way, I hiked fast, and came upon an unusual creature.  Both of us were mutually surprised, but I raised my camera in time to get off a couple of zoomed-in shots.  I took a step sideways for a better one, and the small, catlike animal bounded away into the forest, its long bushy tail bouncing high in the air behind it.  What on earth was it, I wondered.  I waited for Vicki to catch up, then the two of us stole forward, hoping to sneak another glimpse of it.  But it was to no avail, as it knew where we were, and wasn’t about to be taken by surprise again.  It wasn’t until I got home and began searching images on the internet that I decided it must have been an American Marten, a small, carnivorous predator of the northern forest. 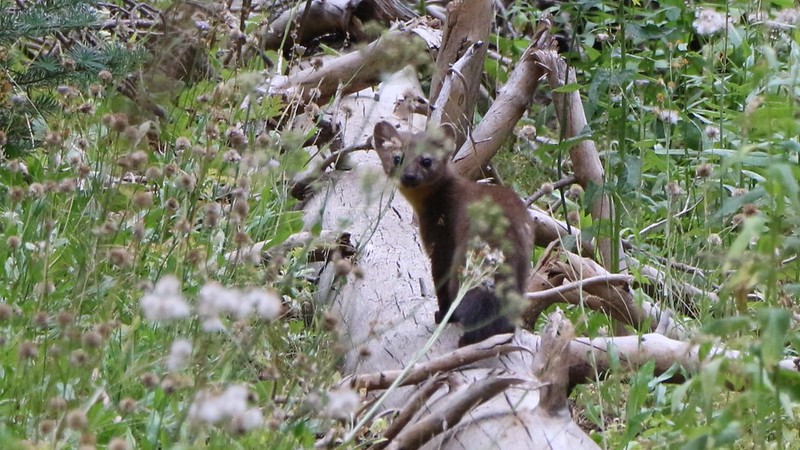 Not far beyond that was the camping spot.  There was still only a light sprinkling going on, but we didn’t feel it much under the trees.  It was the ominous boom of thunder that really made us hustle to set up the tent and get our gear inside.  Once that was done, we had time to explore the immediate area.

It turned out that we had camped right next to a beaver dam!  At first we weren’t sure, because I’d never heard about beavers in the Sierra Nevada, but the chew marks on the dam’s branches (and a couple of nearby stumps) made it obvious that this was the work of beavers.  And it was placed perfectly, directly above a low granite waterfall.  It was only a foot or so high, but the sticks were packed with mud and grasses, and the river upstream was flooded perfectly, running broad and flat around a corner and out of sight into China Flat.  We didn’t see the beaver’s home, but we did see a family of ducks and several small fish.  After I got home, I found out that beaver are not indigenous to the Sierra Nevada and were introduced into the Lake Tahoe area in the 1940’s.  So this beaver didn’t belong here at all.  But then again, maybe I didn’t belong here either. 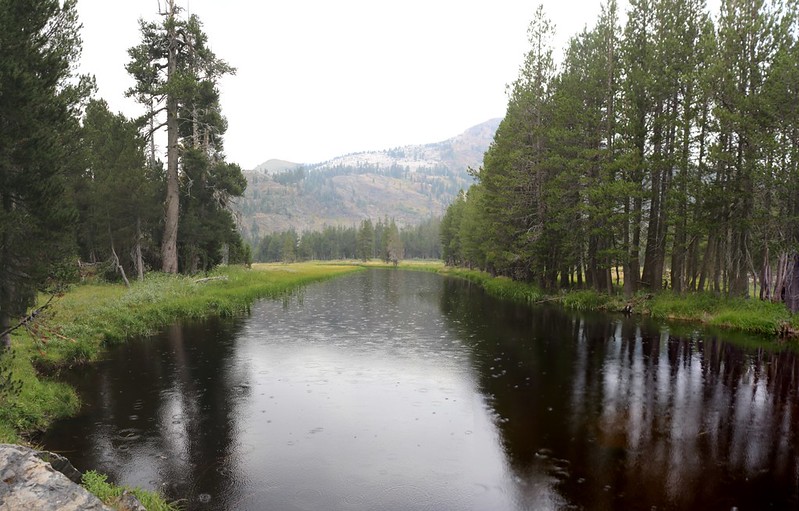 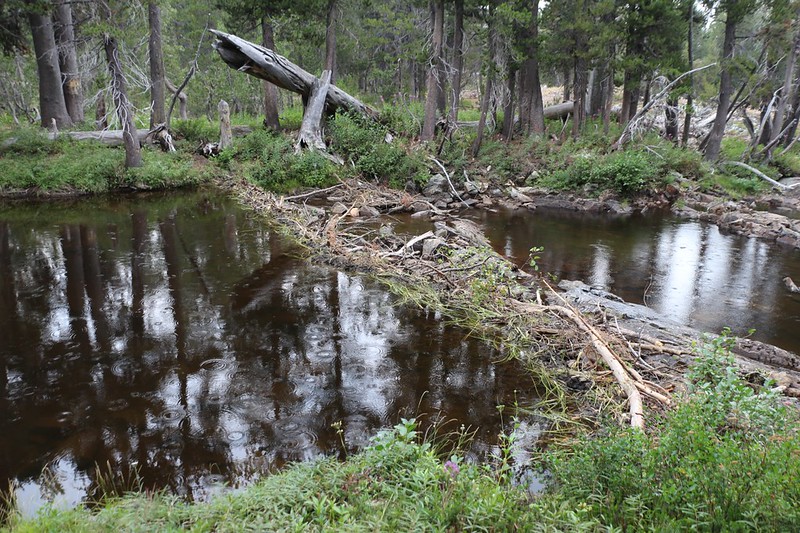 Beaver Dam near our campsite 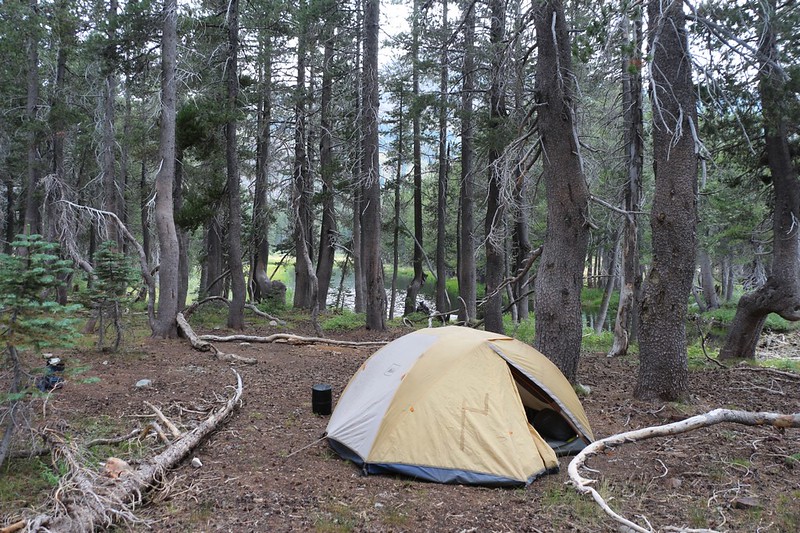 Our campsite on the Rubicon Trail just north of China Flat

It turned out that the rain didn’t last very long, and the thunder clouds blew off to the northeast.  We filtered water, ate dinner, and did the usual camp chores.

Then we got out the map and stared at it for quite some time.  Vicki’s foot hadn’t done that well after all.  She’d been in pain most of the day, and tomorrow’s plan had us climbing up the Rockbound Trail, visiting two lakes, Lois and Schmidel, then heading back down to the Rubicon Trail.  It was a lot of up and down for no particular reason except to visit the lakes.  And the day after that was supposed to be the toughest day of the trip, a long eight mile hike, climbing 2000 feet, up and over Phipps Pass to Rubicon Lake.  Vicki was a bit worried about this, but I told her not to be.  Our plans weren’t written in stone, after all, and the whole point of being out here was to have fun, not to be miserable.  So we modified the plan right then and there.  We’d skip visiting the two high lakes, and instead hike further down our current trail, then turn right and climb east up to Middle Velma Lake, where we’d camp.  This was about five miles and 800 feet of climbing, which was entirely doable.  Also, Rubicon Lake would be much closer, and we’d hike there the following day.  Then we’d be back on schedule.  We also liked the idea of camping at another lake.  Both of us felt good about this plan, and we went to bed in a much better frame of mind.