Day 1:  We “hiked” by Boat across Echo Lake and then walked northbound on the PCT to Lake Aloha.

The Desolation Wilderness, situated just west of Lake Tahoe, is one of the most popular wilderness hiking destinations in the country.  Not that Vicki and I had ever been there.  Let’s face it:  Lake Tahoe is a long way from San Diego, about a nine hour drive, so we never got around to visiting.  But I’d heard a lot of good things about it, so I did my research, came up with a hiking plan, and got our reservations for a Wilderness Permit six months in advance, just to be on the safe side.  And then we waited.

In mid-August, we drove north during daylight hours, and got stuck in LA traffic for a long, long time.  Yuck.  I’ll never do that again.  It ended up taking us 12 hours to reach our hotel room in South Lake Tahoe, where we arrived in the nick of time, just before the front desk closed at 11pm.  Whew!  We stayed at the motel because we wanted to hit the trail early in the morning, fresh and clean and rested.  Which we did.

We drove up to Echo Lake and dropped off our packs at the boat dock, then I found a parking spot for the car.  By the time I got back, Vicki had purchased spots on the day’s first water taxi to the far side of the upper lake.  It cost us fourteen bucks each, and saved us three miles of boring hiking along the developed lake shore.  And the boat ride was fun!  It was fast, and as we roared across the lake we got to check out plenty of beautiful vacation homes along the shore.  We’d never hiked by boat before, and this turned out to be a great way to begin our trip.  It was well worth the money.  And they even had a sturdy dock at the far end to safely (and dryly) unload ourselves and our backpacks. 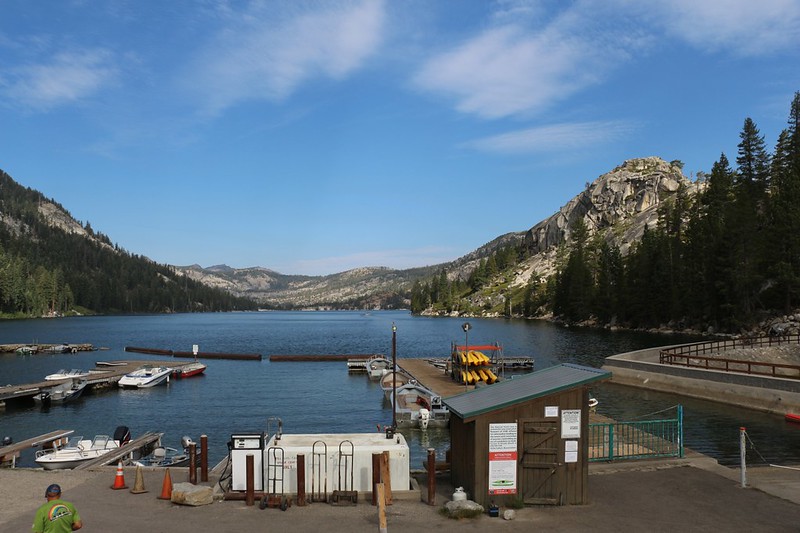 We were glad to save the three miles, but our new problem was that the trail began climbing immediately, with no warm-up whatsoever.  But that was OK.  It was a perfect Summer day, and even though the hiking was hot in the sun, there was enough intermittent shade to allow us to cool off along the way.  And, as usual, the views got better the higher we climbed.

This was a very well-developed trail at this point.  There were plenty of day-hikers all heading to Lake Aloha (our destination as well) and the trail was very wide.  And rocky, which didn’t make Vicki all that happy, as her foot was in bad shape.  It had gotten crushed six weeks previous, and still hadn’t fully healed.  Every step hurt, in other words, but she wasn’t going to let it stop her from partaking in our annual Summer Trek.  She’s tougher than she looks.

This section of trail was not only part of the Pacific Crest Trail, it was also part of the Tahoe Tim Trial (PCT and TRT).  Most of the PCT thru-hikers had already passed by this section and were currently up in Oregon and Washington, so it wasn’t as busy as we’d feared. 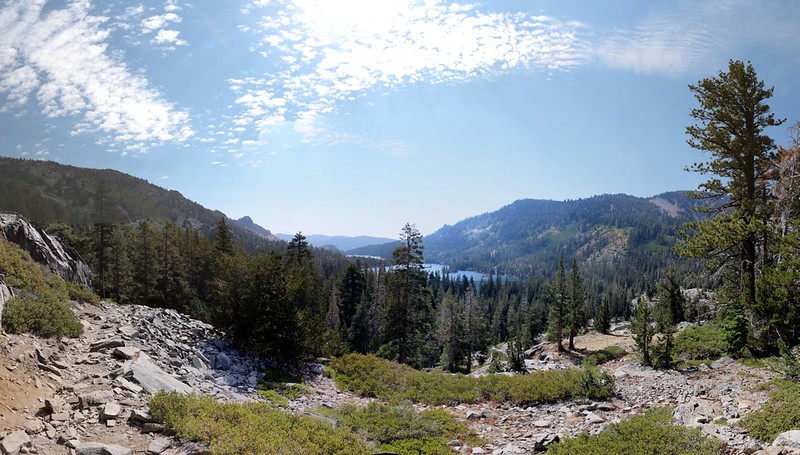 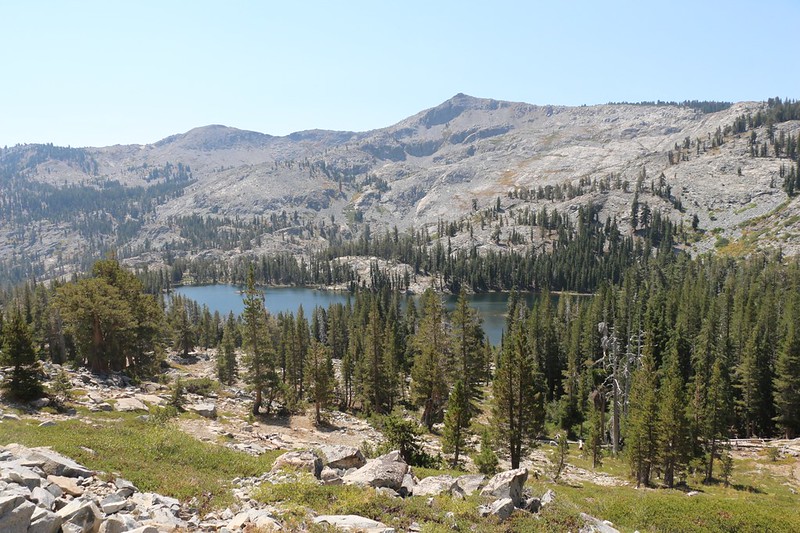 Tamarack Lake lies below the PCT as we continue to climb, with Ralston Peak across the way

The first two miles of trail climbed almost one thousand feet, and that was more than enough for Vicki.  We stopped for a long nap in the shade of a tall pine and ate an early lunch.  I think Vicki would have camped right then and there, as her foot wasn’t very happy, but I reminded her that we had to hike a bit further this day, as our permit specified the “Aloha” zone for our first night’s camp.  Our original plan had been to camp near Lake Margery (just barely within the Aloha Zone) but the boat ride had been very helpful.  So I got out the map (after her nap) and managed to convince her to keep on going all the way to Lake Aloha.  The uphill was over, I reasoned, and the lake was known to be beautiful.  Also, it would make tomorrow’s hike two miles shorter.  She grudgingly agreed, and on we hiked. 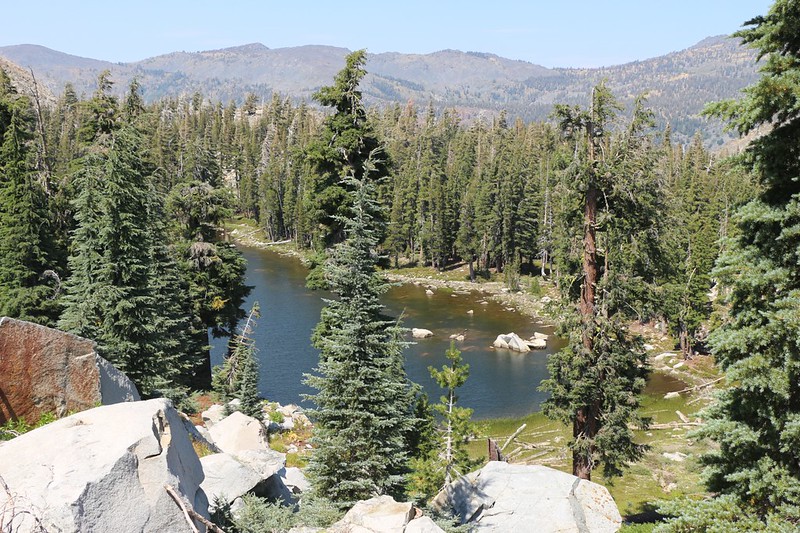 The PCT passes by above Lake Margery

Lake Aloha was gorgeous, as advertised.  It sat in the bottom of the Desolation Valley (the namesake of the Desolation Wilderness) and had a dam somewhere down at the south end.  It was a broad, shallow lake, a mile wide and about two miles long, with many shallow arms and islands of smooth, glaciated granite.  We realized that, back in the Ice Age, this valley had probably been covered in hundreds of feet of ice.  The ancient glacier had scraped the surface clean, leaving only a few erratic boulders.

We headed down the trail to the lake, and took off our packs right away.  The first thing we did was head for the shore, where we checked out the water and enjoyed the fine breeze under a cloudless sky.  We sat down and relaxed for a while.  I got out the map and pointed out the local mountains, and also showed Vicki the location of Mosquito Pass, tomorrow’s first destination.  We began to notice other people nearby.  Some were swimming and bathing in the water, but it was too cold for us.  In fact, we began to see people all over the place.  They were camped everywhere, but their tents were down in granite hollows, so it was a bit deceptive.  It was much more popular than I expected.  And for good reason.

Vicki with ribbons flying as she looks across Lake Aloha to the Crystal Range, with Mosquito Pass on the far right

GoPro panorama video from the southeastern shore of Lake Aloha

We decided that we wanted a bit more privacy for our campsite (while still having a nice view), so I left Vicki near the big packs and wandered off toward the north, inland from the lake where the granite sloped higher.  I was gone for quite some time, jumping up and over boulders, heading this way and that, looking for the perfect spot for the tent.  Eventually, of course, I had to settle for something a bit less than perfect, but it was still pretty nice.  I went back and then we carried our packs the final distance.  The flat area for the tent was down in a sheltered hollow, but there were great spots nearby to sit and eat dinner on later.  Vicki liked it, so we set up camp.

Panorama view south from our campsite on Lake Aloha, with Pyramid Peak on the right

Vicki took her usual afternoon nap while I headed down to the lake to filter two gallons of water.  On the way I met a young couple who insisted on swimming in the lake.  I told them that they were nuts, but they didn’t care.  I took some pictures for them (with their phones) and we talked about the trail.  They were heading back out the next day, and told me how much they enjoyed camping at Susie Lake the night before.  This lake hadn’t been on my radar (except as a lake along the trail) but I took note of it, just in case.

Then I headed back and discovered Vicki, high on a granite boulder, waving at me in the distance.  I hustled back to camp and told her about the people I’d met.  We got out the map and looked for Susie Lake, which wasn’t very far away, and also to check out tomorrow’s route over Mosquito Pass.  We didn’t like the name, but thus far there hadn’t been any bugs, so we had high hopes for the hike.

We ate dinner soon after, and the air got cooler as we sat there.  There weren’t any clouds, so we decided to head to bed early rather than waiting for what looked to be a boring sunset.  Then we headed to bed early.  We talked about the day.  Lake Aloha had been worth hiking to, and the boat ride had been awesome.  Vicki’s foot seemed to be holding up, and we were excited to be heading out tomorrow into a less popular section of the wilderness.