We hiked to Sam Mack Meadow from our base camp at Fourth Lake, and headed up the Palisade Glacier Trail until we reached an amazing viewpoint that looked down into the entire Big Pine Lakes Basin.

Vicki decided to get up a bit early because there was a decent amount of climbing in order to reach the meadow.  She wanted to get the tough part finished before it got too hot outside.  So we we got out of the tent in the chilly, pre-dawn darkness and began getting ready for our day.  But we didn’t rush things too much.  We were on vacation, after all.  Vicki cooked some coffee and freeze-dried breakfast, while I made sure that the daypack (Vicki’s near-empty backpack) was ready.  Plus I took a bunch of photos of the alpenglow across the basin.  The sky was clear and it was looking to be another perfect day in the High Sierra. 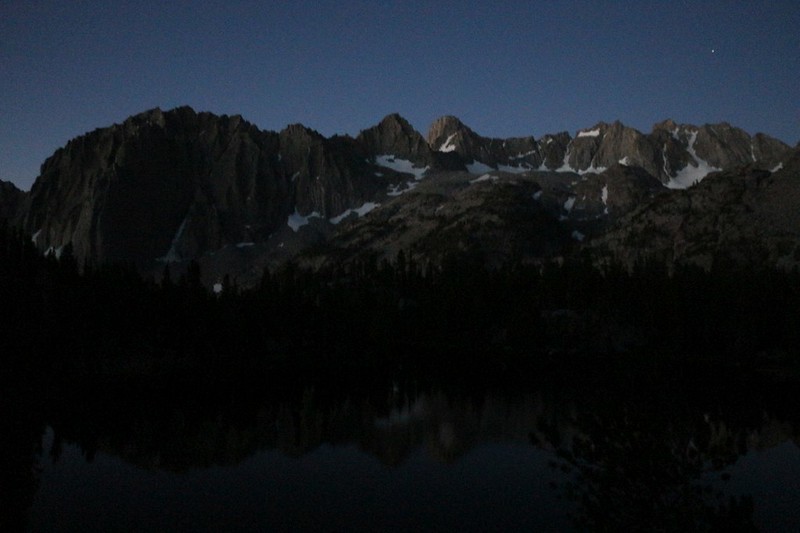 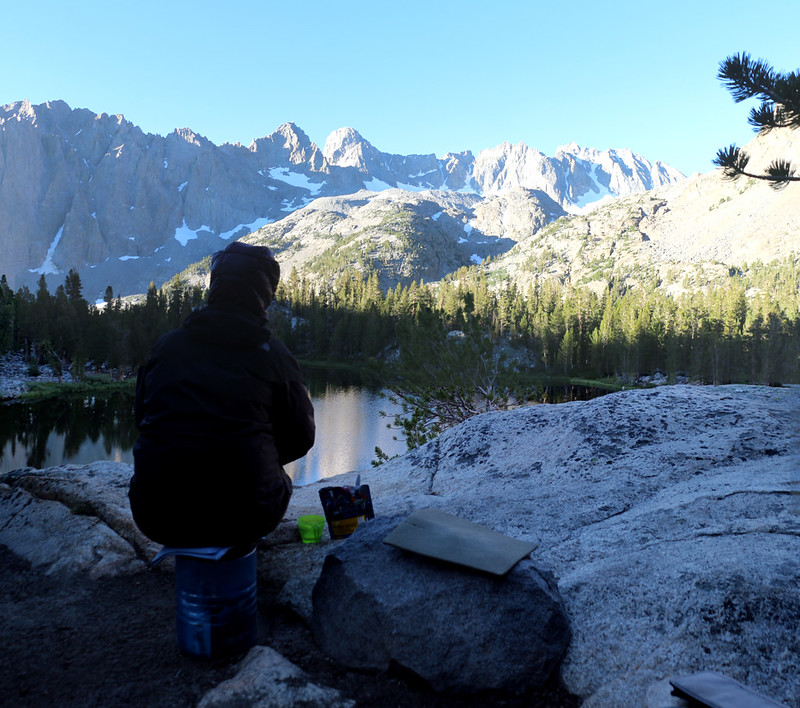 We hiked out, heading south around Fourth Lake, then downhill on the main North Fork Big Pine Lakes Trail toward Third Lake.  We turned off onto the Sam Mack Meadow Trail (or the Palisade Glacier Trail, depending on who you talk to) and dropped down into the valley.  We crossed the outflow creek from Fifth Lake on a double-log “bridge.”  It smelled wet and meadow-like down there. 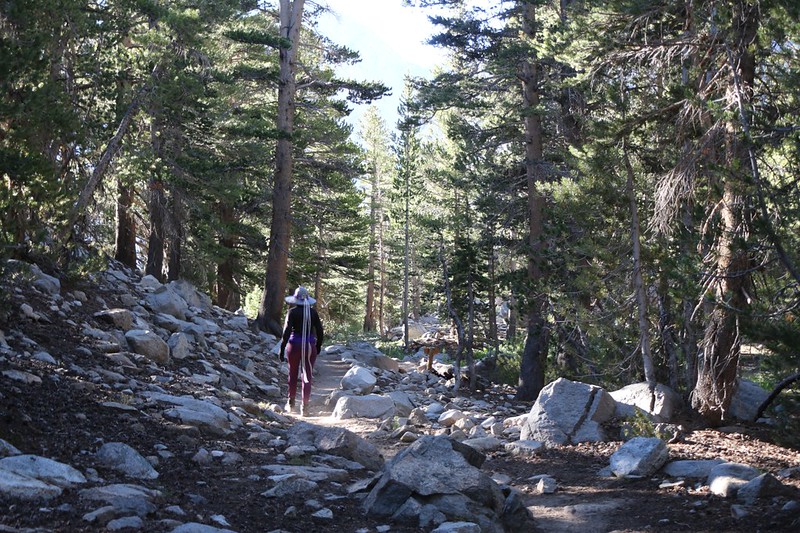 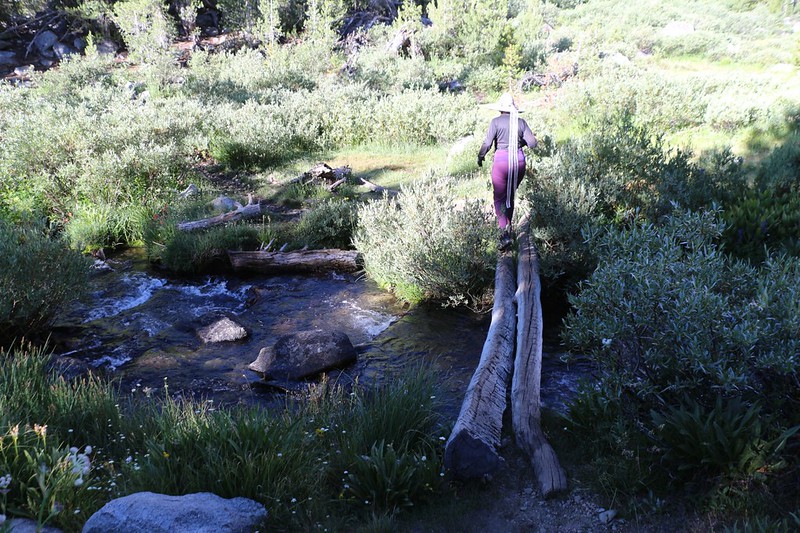 We had about 500 feet to climb in order to reach Sam Mack Meadow, and the trail began climbing immediately, making switchbacks up the south side of the basin.  Unfortunately for Vicki, a lot of the trail was exposed to the sun, and it got a bit warm.  But it was still early morning, and there were occasional trees along the way, so that we were able to stop for short breaks in the shade.  Vicki had wet her hair, down below in the creek, and she didn’t have any problems with overheating.  Also, her breathing was much improved.  She was finally acclimated! 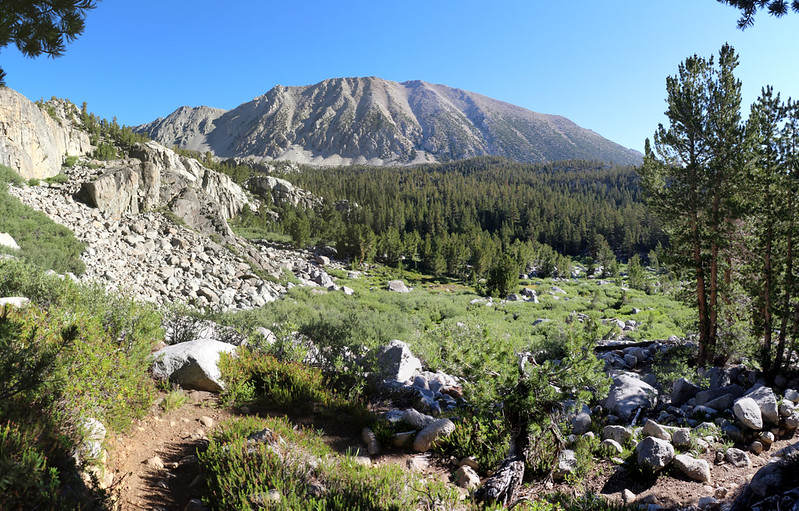 Looking at the Big Pine Lakes Basin from the Sam Mack Meadow Trail, with Sky Haven across the way 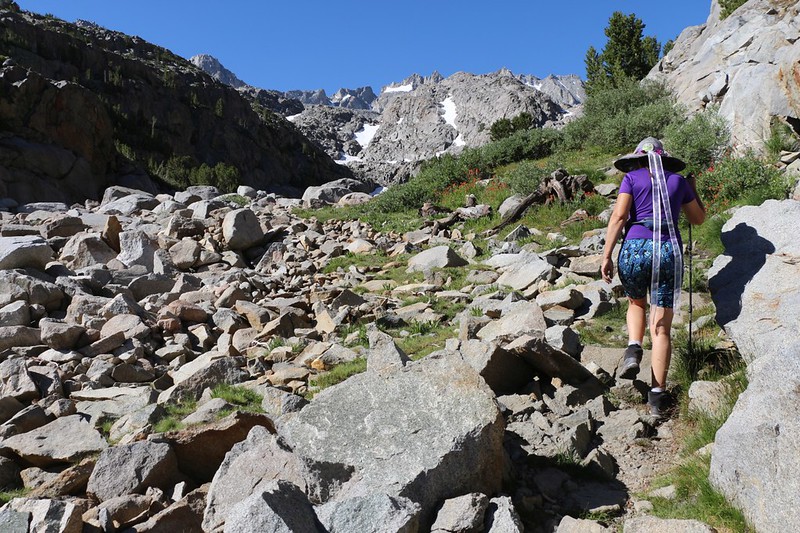 We took a short break when we made it up to the meadow.  It was quite pretty.  I showed her where the boys and I camped last time, up in some nearby pines.  I asked Vicki if she wanted to stay here, or if she was game for climbing a couple hundred feet more, to check out some great views down into the basin.  She was feeling great, so off we went, crossing the creek and climbing on what was definitely called the Palisade Glacier Trail.  Along the way, we got some excellent views back down into Sam Mack Meadow.  The trail switchbacked up the steep hillside, and it was very easy to follow. 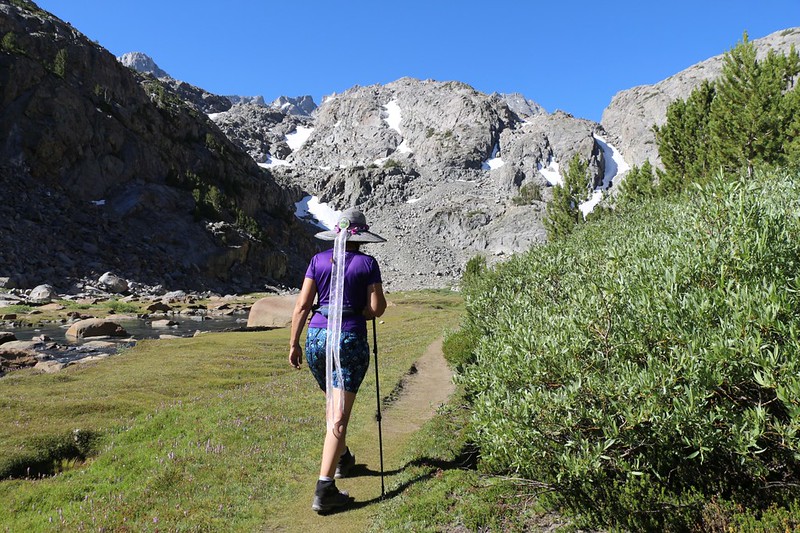 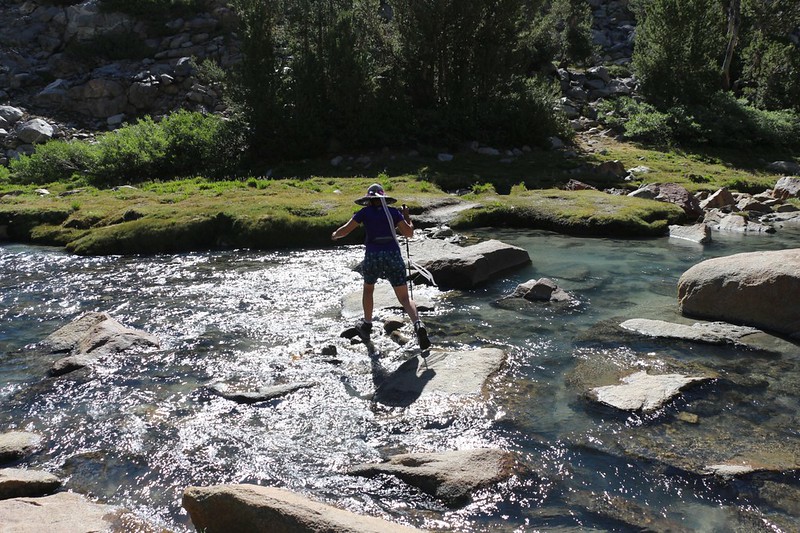 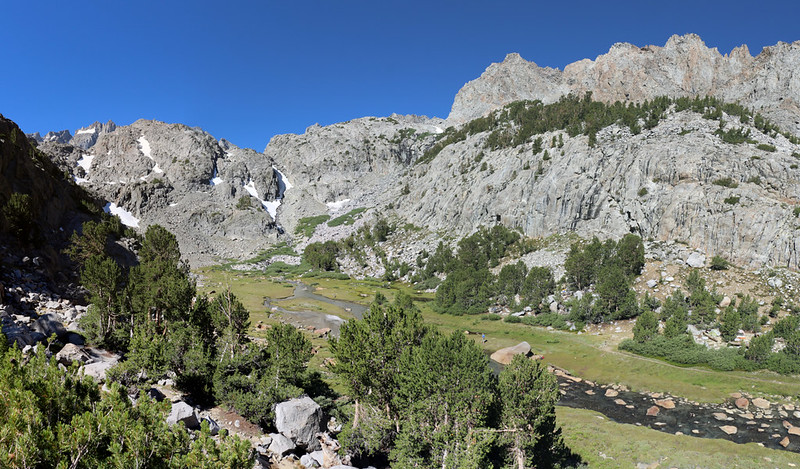 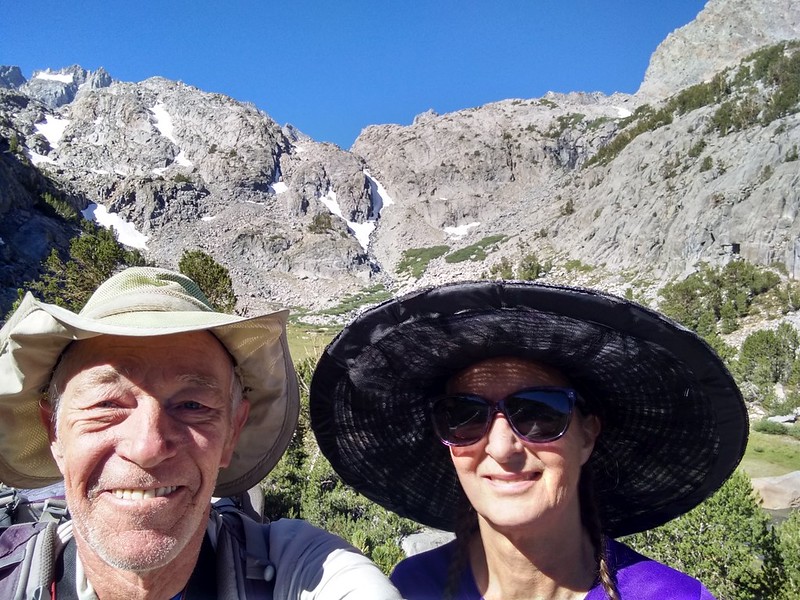 We took a double-selfie with Sam Mack Meadow behind us

The trail swung around to the north, out of the narrow valley, and we began to take in wider views of the main basin.  We picked out Fourth Lake across the way, and figured out where our tent and campsite must be.  I zoomed in with my DSLR camera and took some photos, but I couldn’t be sure that what we thought we were seeing was really our tent until we got back home.

Looking out across the Big Pine Lakes Basin from the Glacier Trail, with Sky Haven across the way 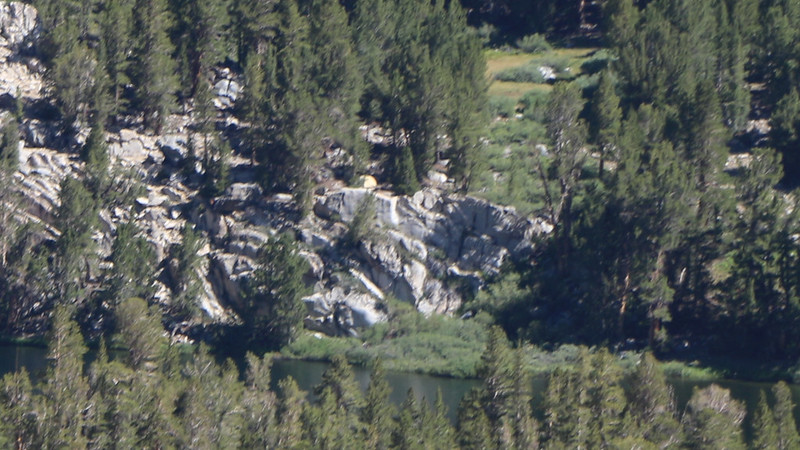 Zoomed-in view of our tent at Fourth Lake: It’s that yellowish hemisphere on top of the granite, above and left of center

As the trail continued, it curved toward the northeast, and then the real views began.  We were finally able to look down on the sparkling turquoise waters of First, Second, and Third Lakes.  Beautiful!  We decided that this was the perfect place for lunch, on this, our last full day in the Big Pine Lakes area.  We left the trail and scrambled over some large talus until we found a big boulder with a particularly nice view.  There was just enough room for the two of us.  Vicki climbed up and I passed her the goodies from the backpack.  We had our own private picnic spot in the mountains, and we made the most of it.

Hiking on the Glacier Trail above Sam Mack Meadow, with the Big Pine Lakes Basin down below us 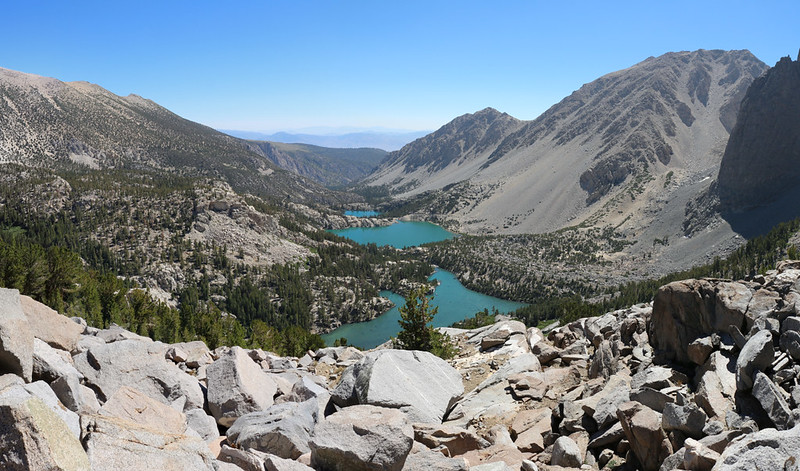 First, Second, and Third Lakes from the Palisade Glacier Trail

After lunch was over, I asked Vicki if she wanted to continue uphill to see the Palisade Glacier, which was an impressive sight.  She immediately declined.  Right here was plenty high enough, thank you.  I laughed.  She was happy, and that’s what really mattered.  So we headed back down to check out Sam Mack Meadow in greater detail. 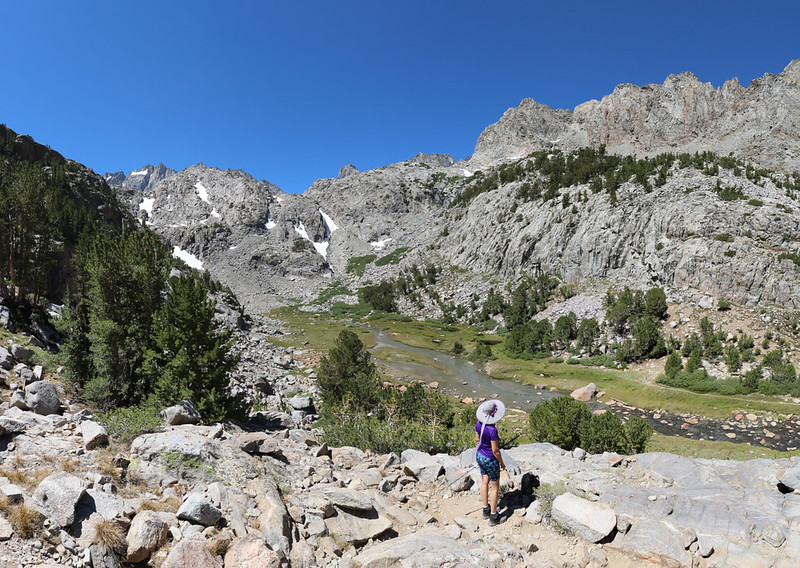 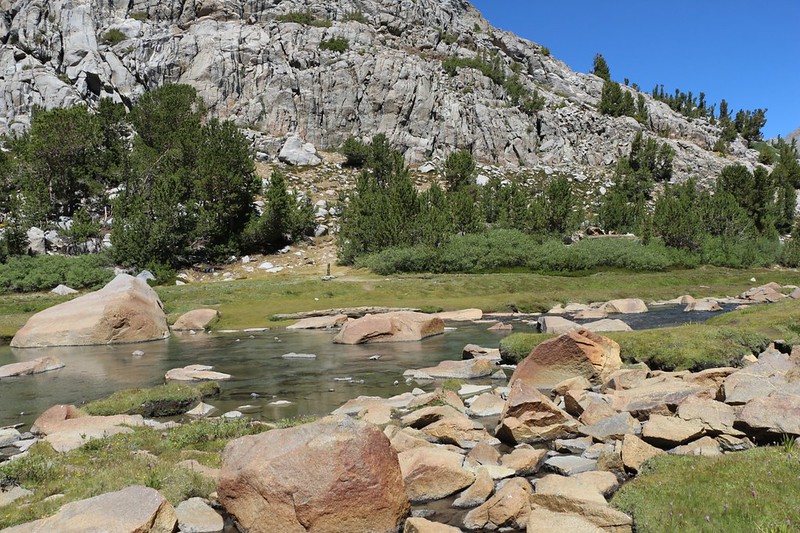 We crossed the creek, turned left, and followed a faint path that led deeper into the meadow.  The ground was marshy, and along the way were small ponds that were full of frogs.  The frogs were sunning themselves up on the grass (probably looking for bugs to fly past) and as we approached they would get frightened and jump into the ponds, swimming down to the bottom for safety.  It was like a wave of jumping and splashing that spread ahead of us as we walked.  Fun! 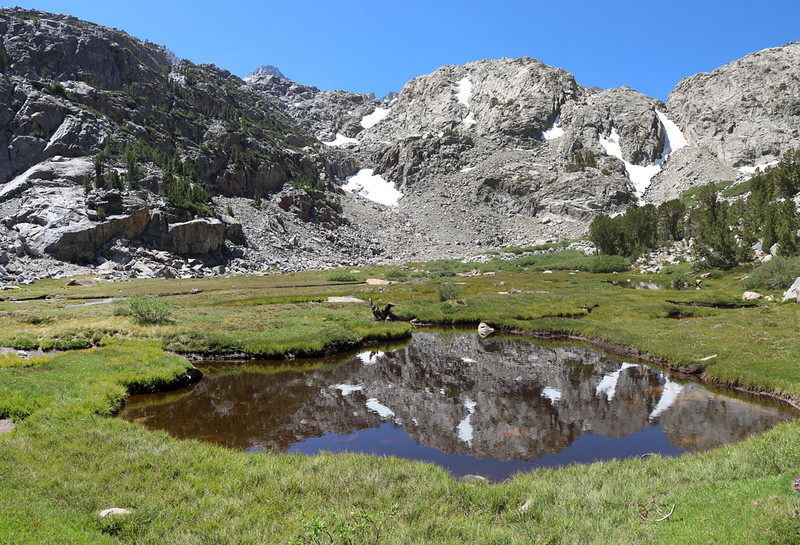 Reflections in a small pond in Sam Mack Meadow

Video of Sierra Yellow-Legged Frogs jumping into a small pond as I walked by. 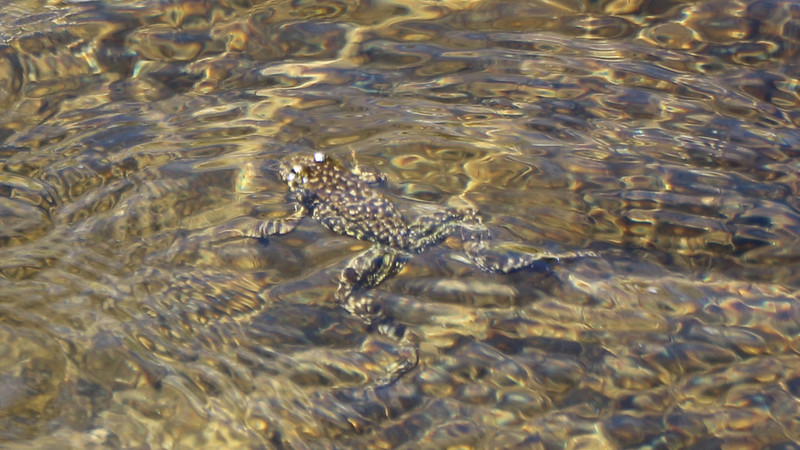 Sam Mack isn’t a very large meadow, and soon we were at the upper end.  There was a noisy waterfall of cascading snowmelt coming down from the glaciers far above us.  We found a flat boulder next to the creek and decided to take yet another break.  We removed our shoes, aired out our hot sweaty feet, and ate a bit of snack.  This is the Good Life! 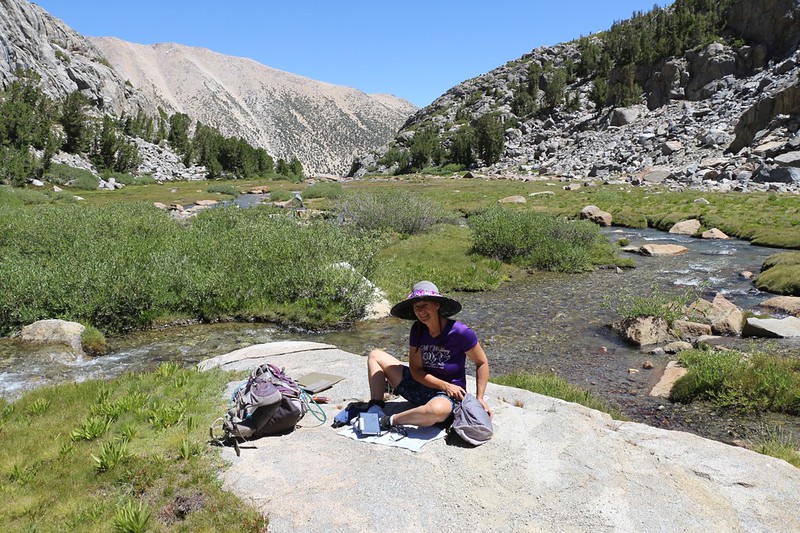 Vicki taking a boot-off break on a boulder. This was a great spot for a snack!

It was still early afternoon, but we decided to head back to camp anyway.  As we left the meadow, Vicki found an icy, late-season snowbank on the north side of the creek and crossed over to get a handful of snow.  She likes to put some snow in her bandana, then place it under her hat.  The snow slowly melts on her head, and it really helps her to stay cool.  Then we hiked down to the valley floor and up the long grade to Fourth Lake. 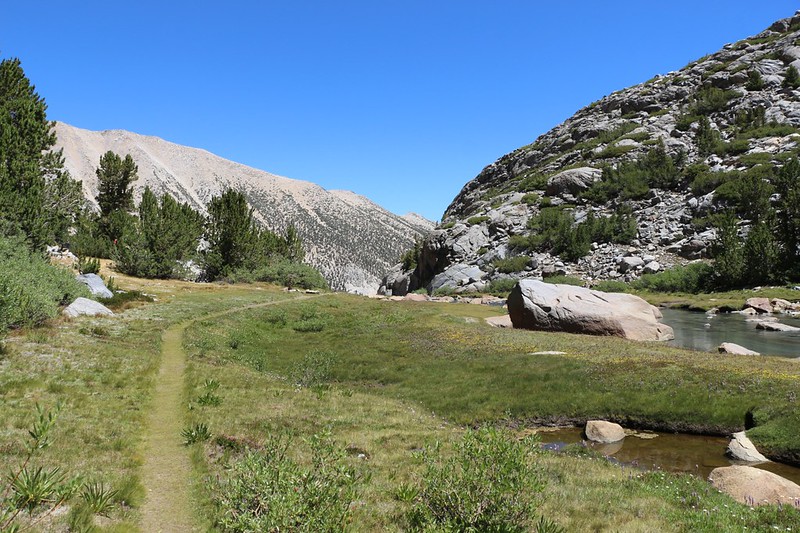 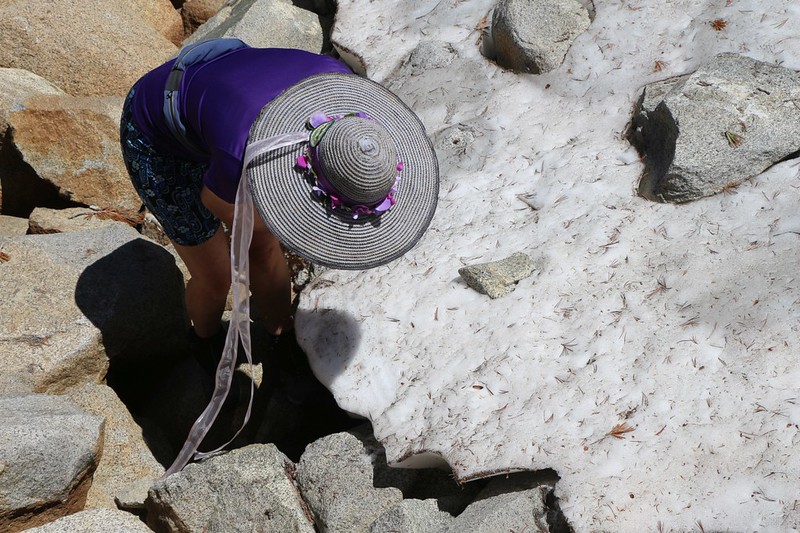 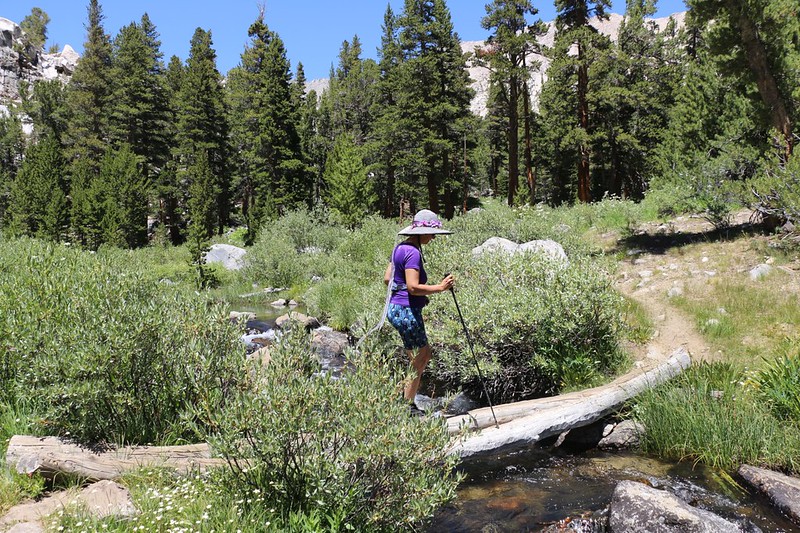 Once again, we stopped on the south shore of the lake for a boot-off break on the big flat boulder.  It was a beautiful day and it really was a joy to simply sit there and look around.  Trout swam past and there was a low hum of insects flying in the air.  Very peaceful.  We could see our tent across the way, and there were a couple of hopeful fishermen wandering along around the shoreline.  Then we headed back to camp.  Time for another extended break!  We were really learning to appreciate this “Base Camp” lifestyle. 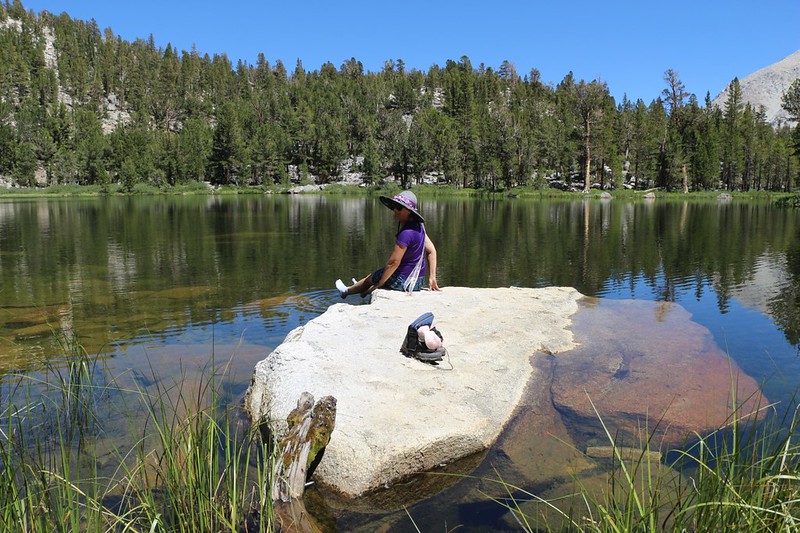 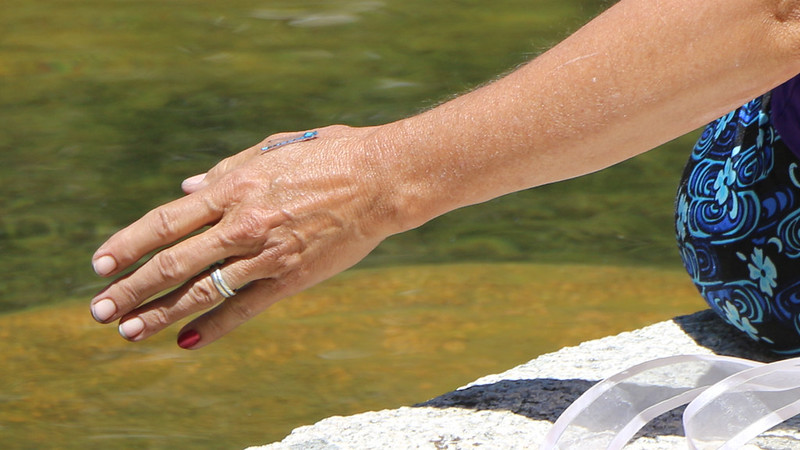 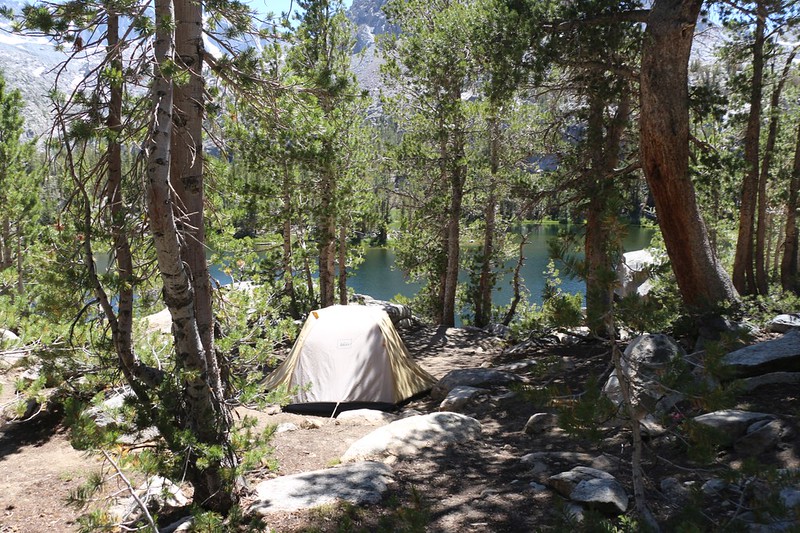 We made it back to the tent in midafternoon, and lay down inside to read our books and take a nap

The rest of the day was spent simply hanging around at camp, staring out at the magnificent view.  Two of our neighbors decided to take a swim in the lake, and used their air mattresses as flotation devices, paddling around the lake and laying out in the sun.  It was perfect weather for it. 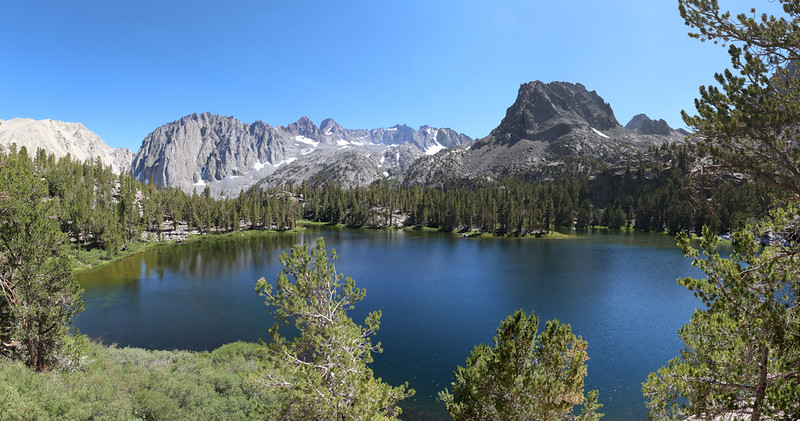 Panorama view from our campsite on the northern shore of Fourth Lake – what a great spot! 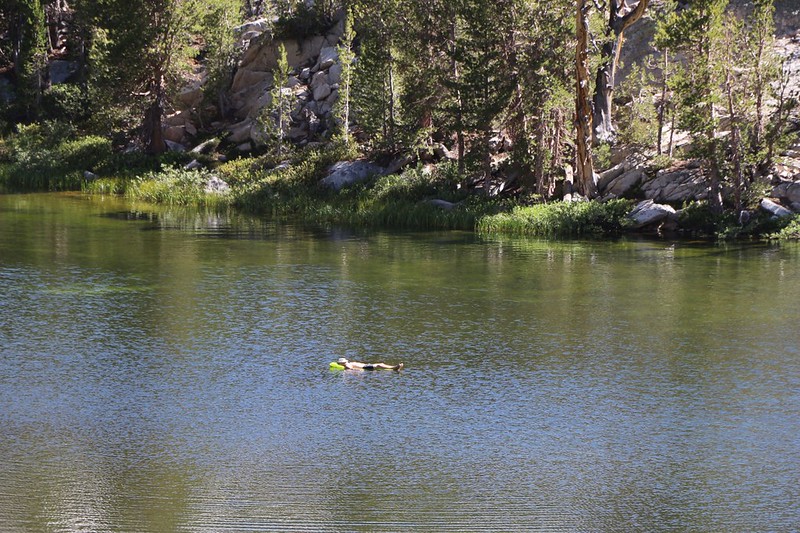 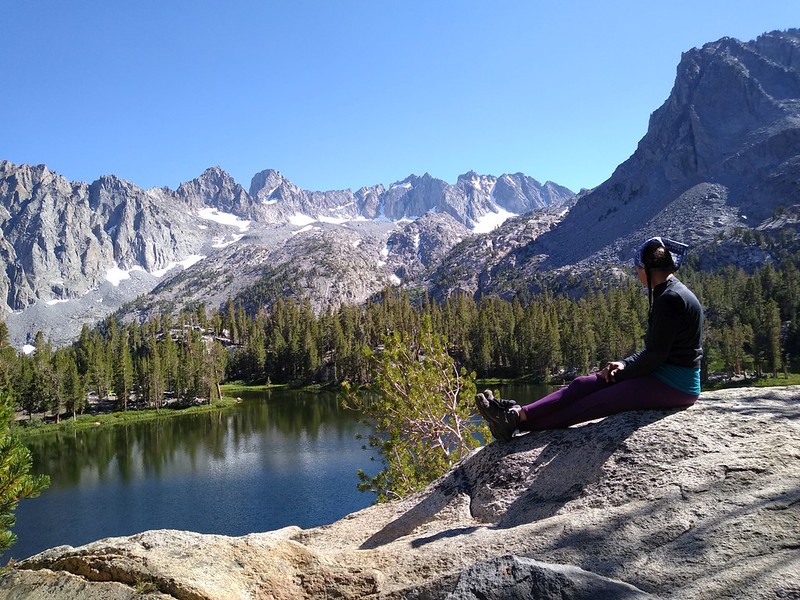 As the afternoon waned, I headed west to the little creek and got more water for dinner (and tomorrow’s hike).  The air cooled and we put on our warmer clothing.  While Vicki made dinner, I headed down to the campsite of our neighbors and gave them my email address so that I could email photos of them floating on the lake when I got home (and I did).

Tomorrow was going to be the final day of the trek, and we decided to wake up super-early to beat the crowds on the trail.  So we headed to bed before sunset, and checked out the map one more time.  The hike was going to be about seven miles long, which was longer than our other days so far, but it was downhill all the way, which made Vicki happy.  And then we went to sleep.