Starting from our base camp at Fourth Lake, we dayhiked up to Summit Lake, headed cross-country to join the trail to Sixth Lake and Seventh Lake, hiked back down the main trail to Fifth Lake, and then travelled back around the south side of Fourth Lake to arrive at Black Lake.  Now, that’s what I call Lots of Lakes! 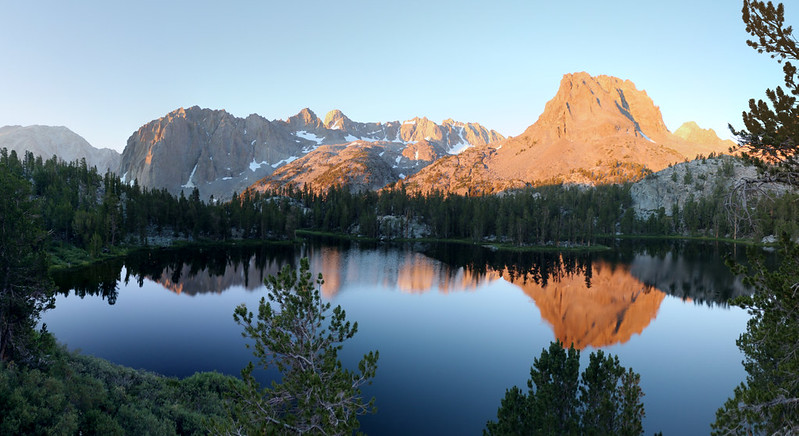 We woke up just after dawn and Vicki told me to go take a photo of the lake.  So I put on my jacket and an extra layer or two, and headed out into the chilly air up at 10,800 feet elevation.  Brrr!  It was nippy, and I was shivering, but there was the sunrise, so I stepped toward the edge of our campsite to snap a panorama photo.  Very pretty.  But it sure was cold!  There was fog from my breath when I exhaled.  So I headed directly back to the tent and crawled under the sleeping bag to warm back up.  And we stayed that way until the sun struck the tent.  Eventually we woke up, of course, and Vicki made some coffee and a hot breakfast.  We ate, sitting by the lake and watching the trout jumping.  They were eating their breakfast, too!

Two and a half hours after that first photo, we were finally ready to head out on our hike.  I carried the day’s supplies and Vicki carried herself.  And both of us felt super-light, compared with the past few days.  We headed back to the main trail, and continued uphill toward Summit Lake, which was only half a mile away.  Easy hiking, but definitely uphill. 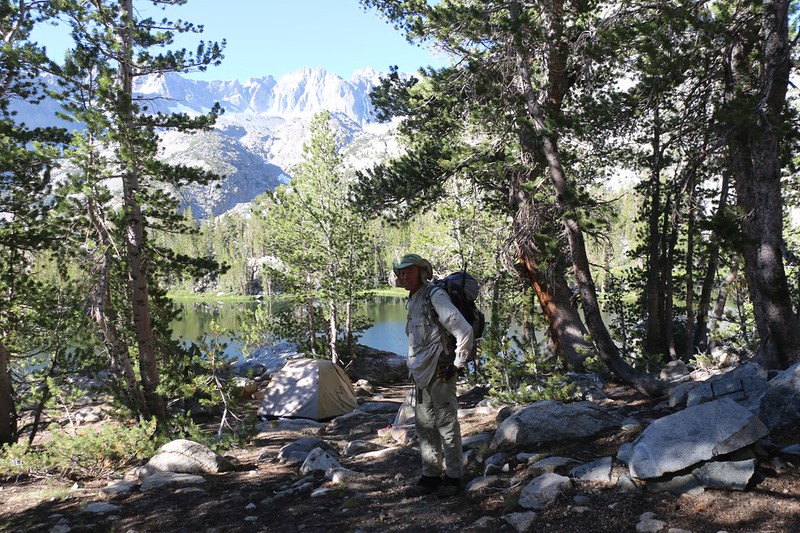 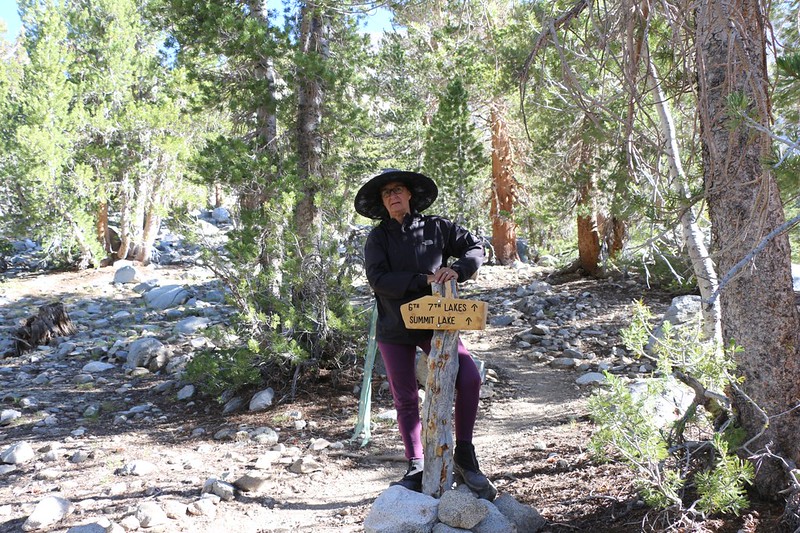 Vicki at the trail sign near Fourth Lake leading to Summit Lake, our next destination

We arrived at Summit Lake and we were the only ones there, even though there are a couple of pleasant campsites on the western side.  This lake has views like our camp down below on Fourth Lake, but you can see a bit more of the Palisade Glacier from there.  A superb spot.  I took a zillion photos and maybe a quarter of a zillion videos.  Vicki wanted to explore, so we headed east to the outflow stream, which was dry in late July 2020.  The lake’s level was a bit lower than it was in 2018, but it was still beautiful.  From the east side, we were able to see west toward Cloudripper Peak, which I had climbed last time.  Vicki decided not to make the attempt, as she was finally getting acclimated to 11,000 feet, and wasn’t interested in trying to breathe up at 13,550 feet, no matter how many glowing descriptions I made about the views from up there.  Just kidding!  No, I didn’t bother trying.  We had enough to do today, what with visiting all of these lakes. 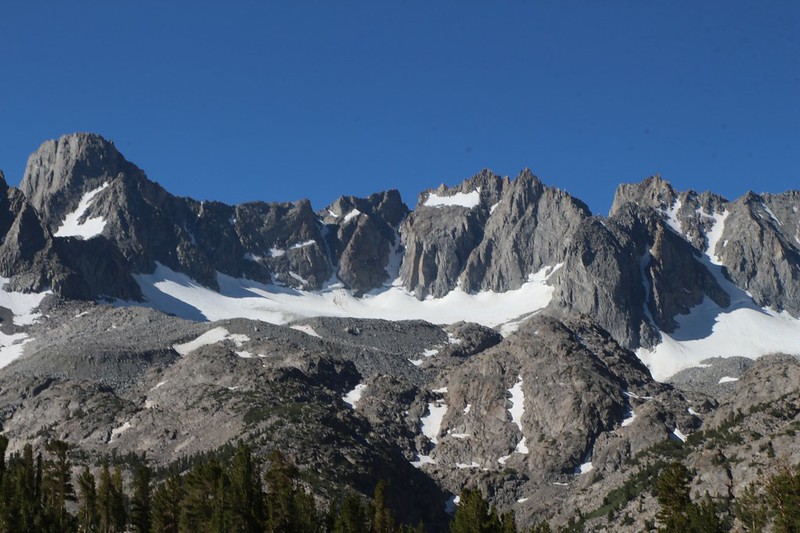 View west from the outflow stream of Summit Lake toward Robinson, Aperture, Two Eagle, and Cloudripper 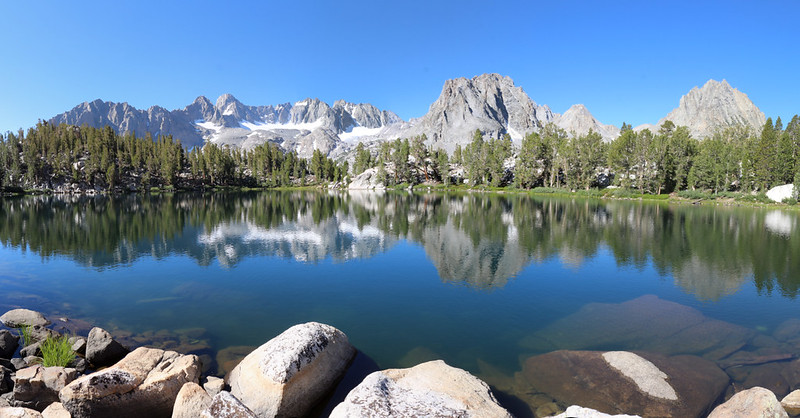 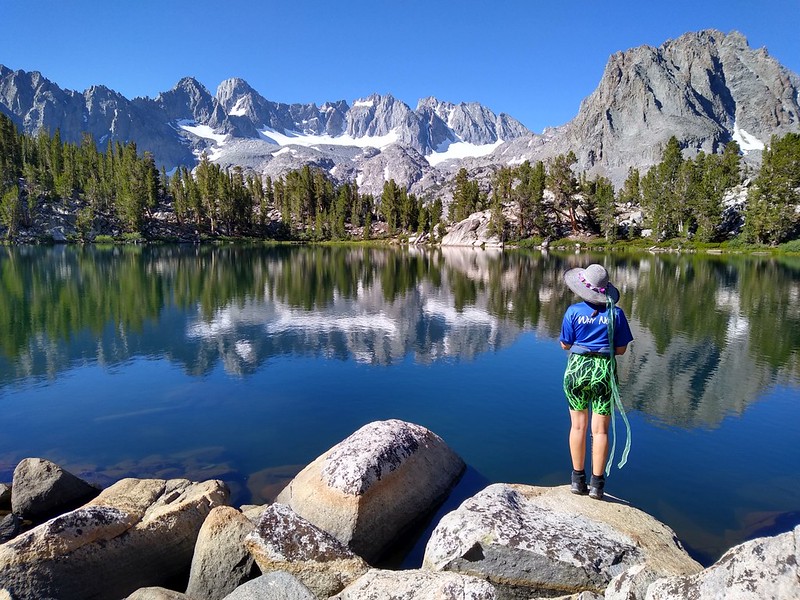 Cell phone camera photo of Vicki posing at Summit Lake. When we got back to the car I sent this to everyone I knew

Our next destination was Sixth Lake.  Vicki wasn’t very happy when I told her that first we had to hike back downhill to the main trail, then hike uphill all over again, so she made me get out the topo map on my phone.  She decided that we could maintain elevation if we hiked cross-country directly to the main trail.  It sounded like a great plan to me (we’ve done this sort of thing often) and we headed off in the right general direction, choosing the easiest paths we could find.  And it really was easy.  Plus, it had the obvious advantages of better views and zero humans.  All we had to do was avoid getting lost. 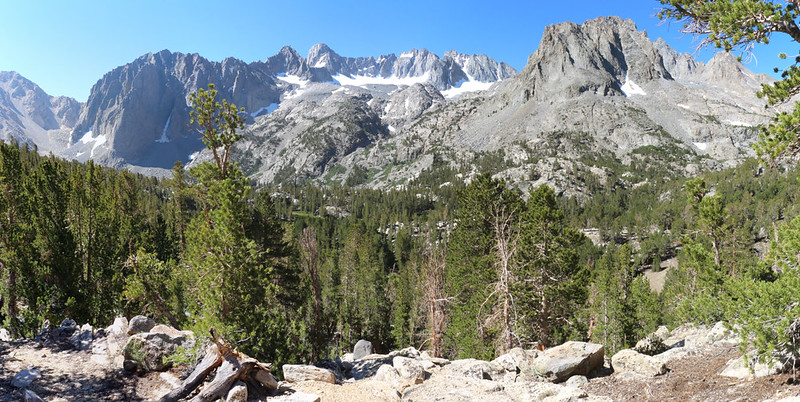 We headed cross-country from Summit Lake toward Sixth Lake and took in high views from 11,000 feet elevation 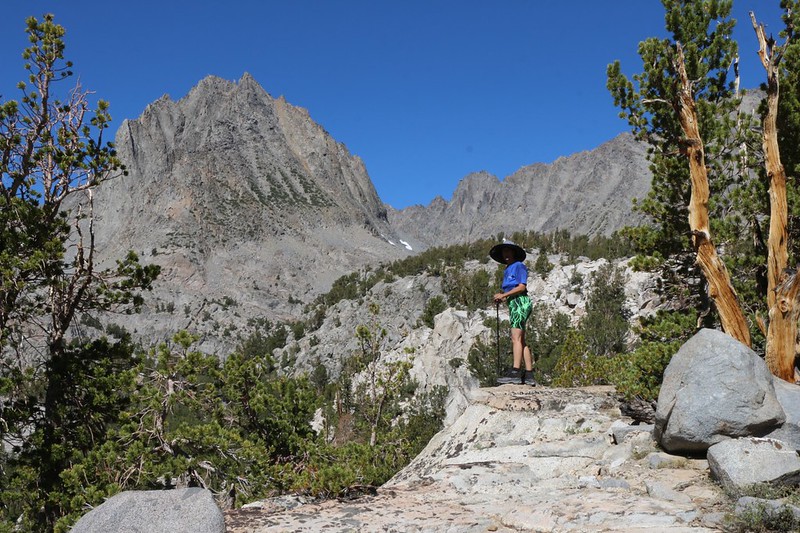 Two Eagle Peak (12966 feet) and the western ridge of Cloudripper

We intersected the main trail perfectly, and continued onward toward Sixth Lake.  The trail was hot and dry.  It dipped downward into two shallow canyons along the way.  One had nice green grass and flowers, and the other only browned-out late-season grass.  Cloudripper was always in front of us as we hiked this section of trail, and I recounted to Vicki how we (my son, his friend, and two dogs) had hiked to the summit two years ago. 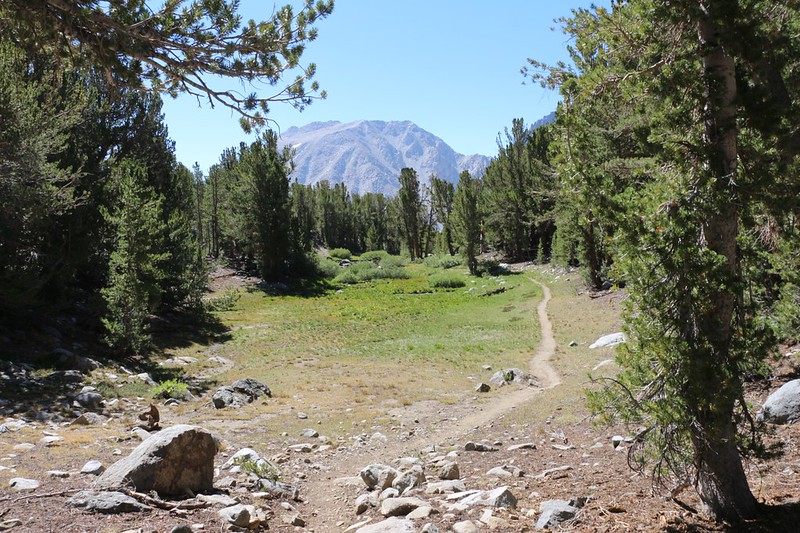 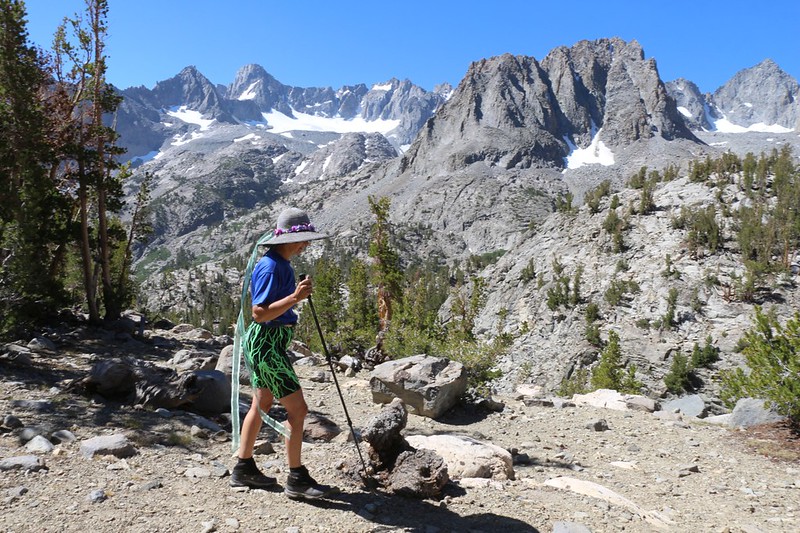 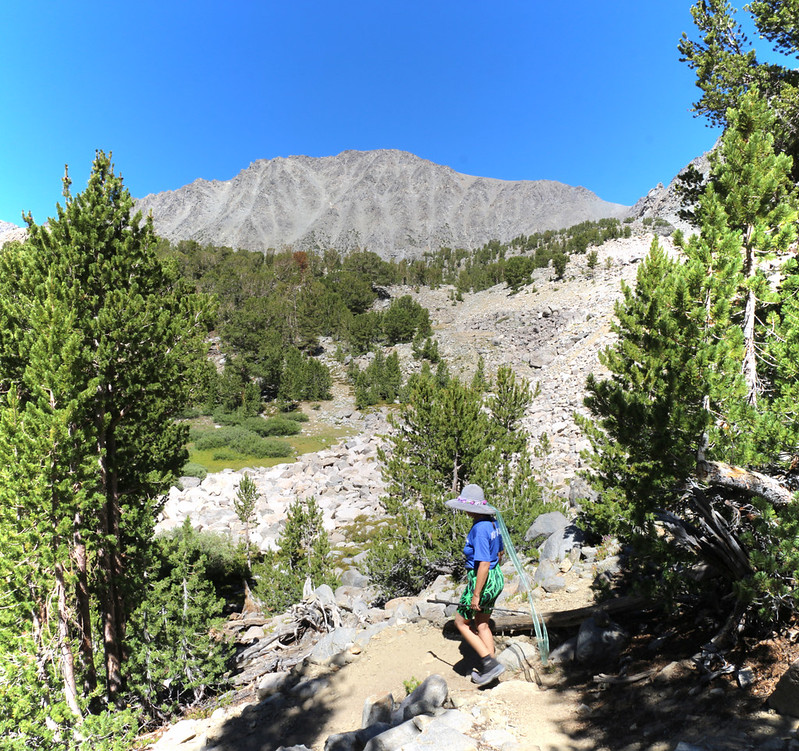 We reached the highest point of the day’s climb, at 11,300 feet, and continued a bit further to the overlook above Sixth Lake.  There was a side path for photographers, and we took it.  We sat down and had a nice break, taking off our shoes and eating some snack.  The view over Sixth Lake was quite dramatic.  We could also see Seventh Lake from there, along with plenty of mountains.  It was a great spot.  I pointed out to Vicki that there really wasn’t anyplace to camp at Sixth Lake, and that even the main trail petered out before it reached Seventh Lake.  The boys and I found a spot to camp at Seventh Lake, thank goodness, and it had made climbing Cloudripper much easier the next day. 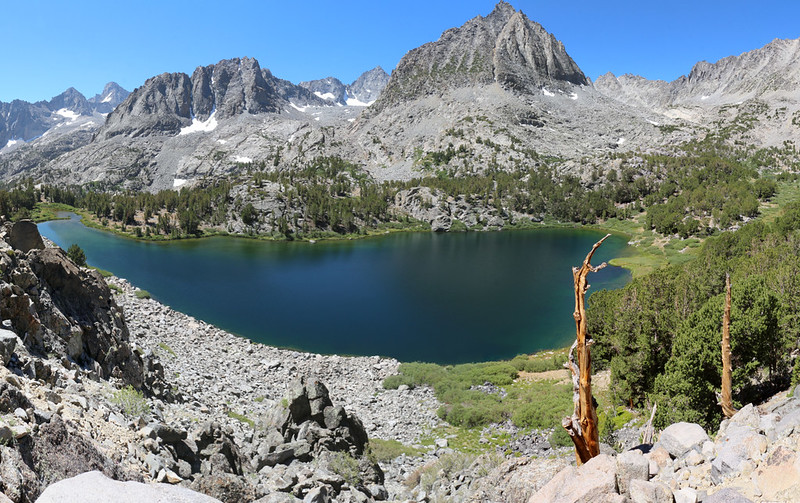 Panorama view of Sixth Lake from the high perch to its north, with Two Eagle Peak right of center 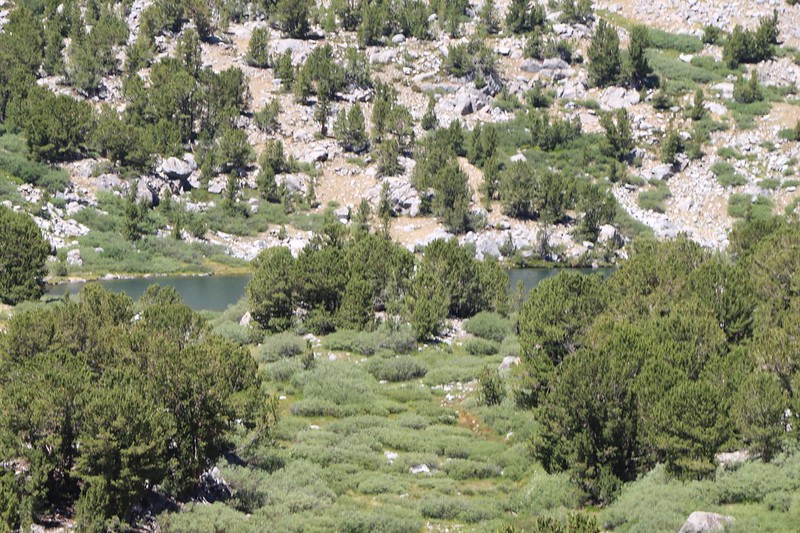 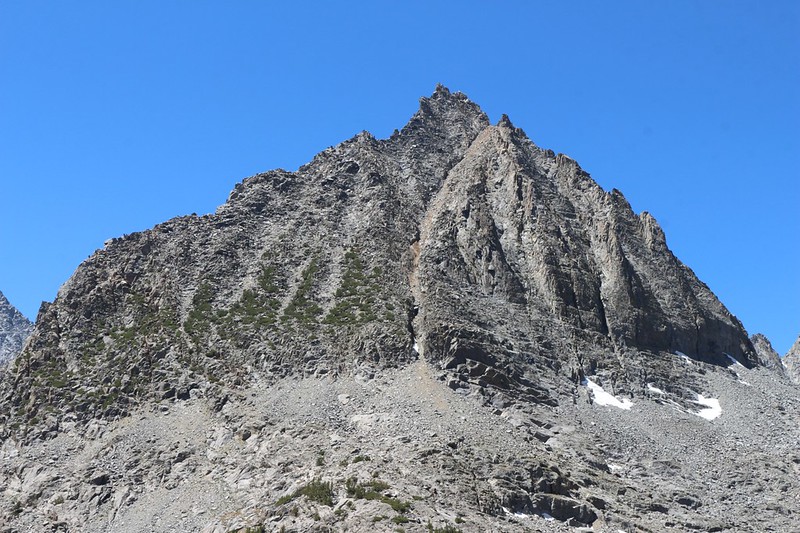 Vicki’s dislike of hiking uphill caused her to decide not to head down to the shore of Sixth and Seventh Lakes.  We basked in their glory from afar.  After that, it was time to move on, back down the main trail to Fifth Lake.  And it was a fun hike, almost entirely downhill, just the way Vicki likes it.  We only met one or two people heading uphill, other backpackers with base camps like us, as the dayhikers and tourists from the cities never made it this far into the basin.  Peace in the wilderness. 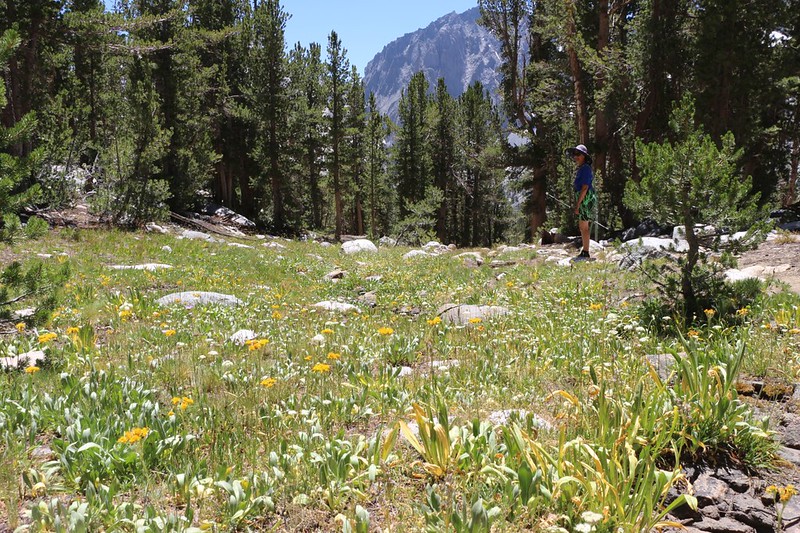 We reached Fourth Lake and took another cross-country shortcut directly over a saddle to arrive at Fifth Lake.  Fifth Lake had the pretty turquoise color that was characteristic of “Rock Flour” from glacial outwash.  The glacier below Mount Agassiz and Aperture Peak drained into this lake.  Those two peaks were old friends, from our trek to Bishop Pass back in 2011, when we hiked on the western side of the Inconsolable Range.  I fired up my PeakFinder app and we were able to identify them in the distance, directly between the foreground peaks of Mount Robinson and Two Eagle Peak.  That was a hike for another trip.  Vicki and I contented ourselves with scrambling along the talus on the north side of the lake, where we spied out a couple of campsites.  But we liked our own basecamp better.  We ate our lunch and relaxed for awhile.  There was no rush, after all, and it was quite mellow. 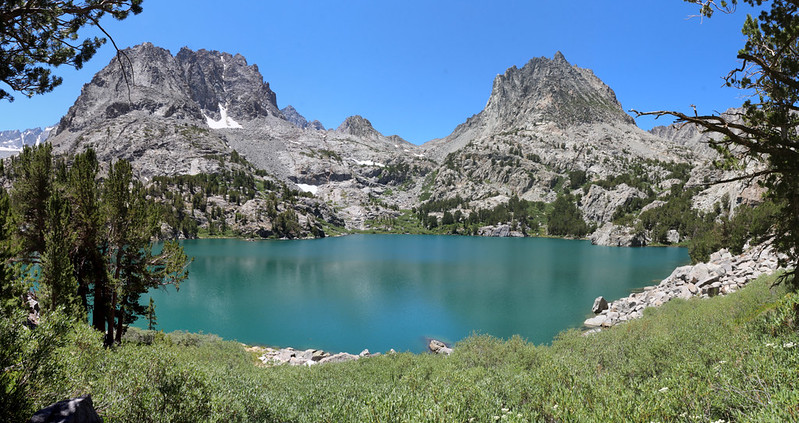 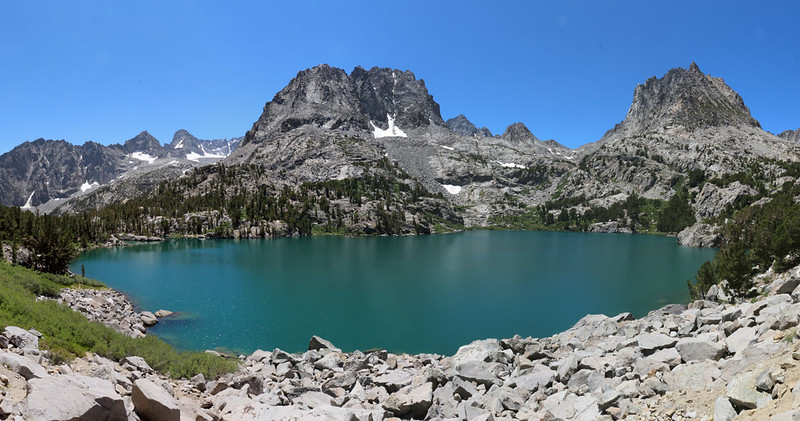 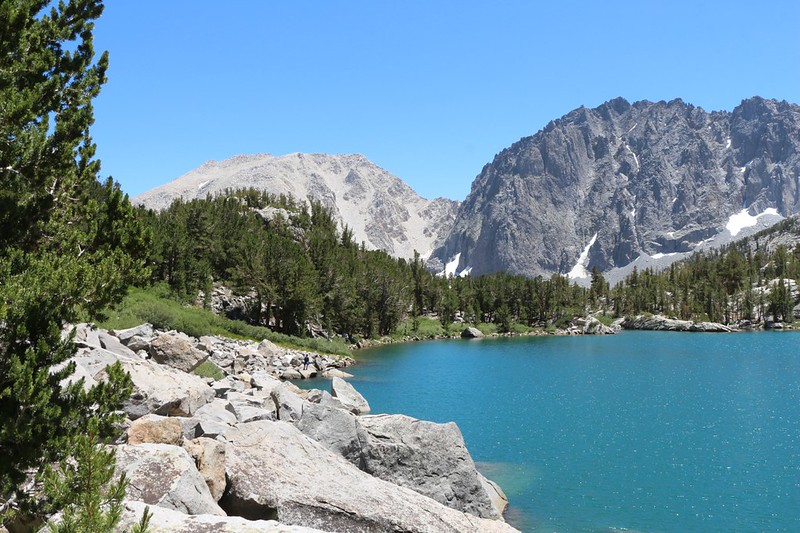 Heading back along the shore to the Fifth Lake Trail, with Temple Crag on the right

We took the main trail to Fifth Lake on our way back to Fourth Lake, but this time we stayed on the south and east sides of the lake.  There was a really nice boulder at the shore near a small peninsula, and Vicki went out there to soak her feet in the lake.  We could see our tent on the granite cliffs across the way to the north, but that didn’t matter to us right now.  We continued on around the lake and checked out the marshy, shallow pond near the outflow.  One or two mosquitoes came out for a visit, but it was mostly too hot for them at that hour. 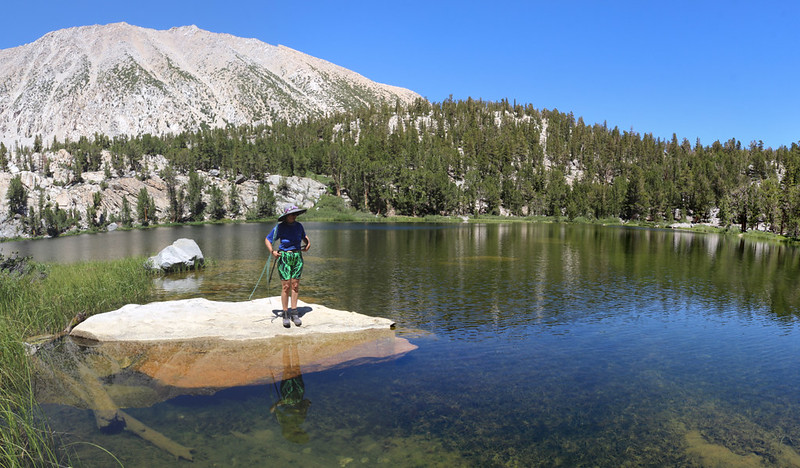 Fourth Lake and Sky Haven on the left

The smaller pond near the outflow from Fourth Lake, with Sky Haven right of center

Vicki was still feeling energetic, so we continued onward to Black Lake.  It was only a half mile away, and the hike was super-easy.  We had thought about visiting it on our way back to the car on our final day, but Vicki decided that she’d rather be able to check out First, Second, and Third Lakes at least one more time.  It was very quiet at Black Lake, and there weren’t any people camping there.  We saw plenty of trout in the deep, clear water, swimming along next to the shore, but, once again, there weren’t any fishermen.  This spot isn’t visited by very many people.  We took a break and checked things out at the lake, but there wasn’t much to do besides watch the fish swimming past, so we turned around and headed back to base camp. 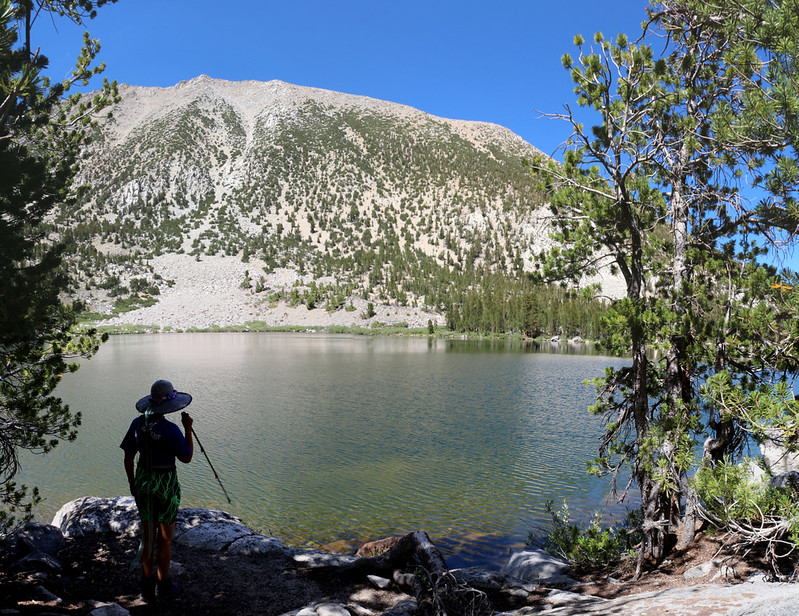 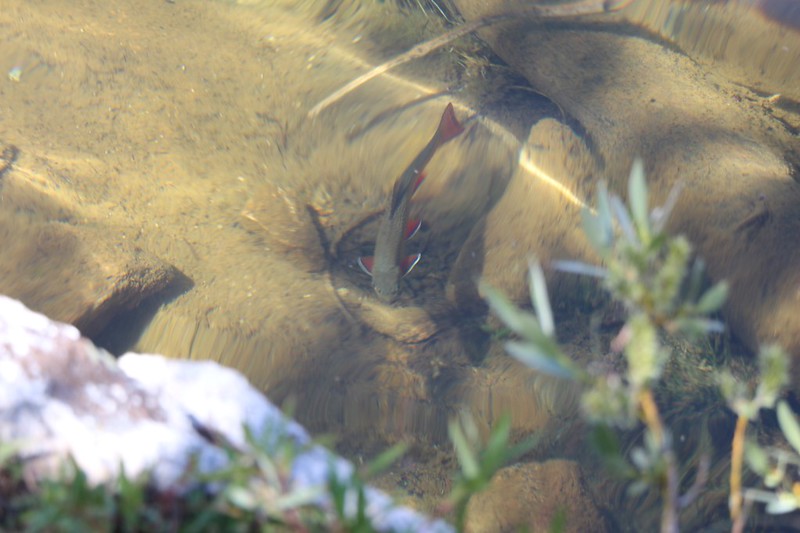 Close-up of a trout swimming along the southern shore

Panorama view of Black Lake, with Sky Haven (12,896 ft) across the way 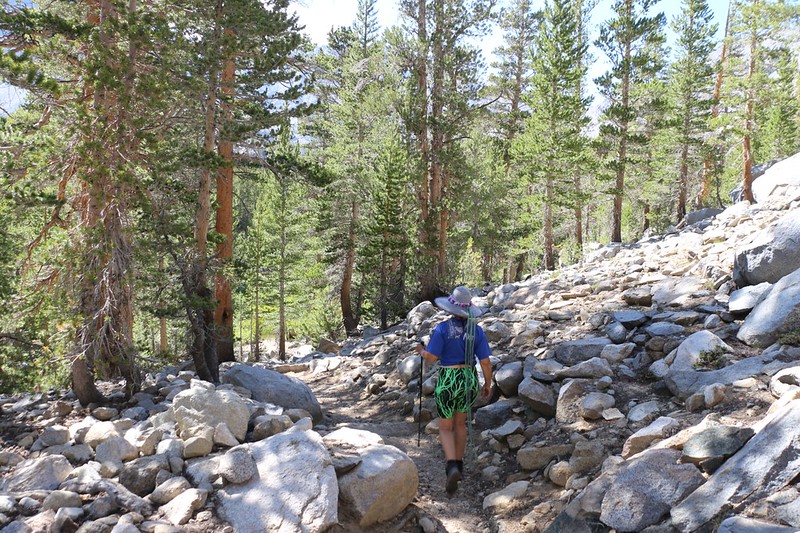 Heading back to base camp on the Black Lake Trail

We made it back to camp and hung out for a bit.  Two of our neighbors were floating around on an inflatable kayak, which was quite a surprise.  Then I remembered that all of their gear had been carried in by horses and mules.  They beached it on the same boulder that Vicki had been sitting on earlier, out on the peninsula.  It looked like fun and I have to admit that I was a bit jealous.  I decided that some year, when our legs and lungs began to give out, that we would give the horseback trek a try.  Meanwhile, we’d keep on backpacking the old fashioned way. 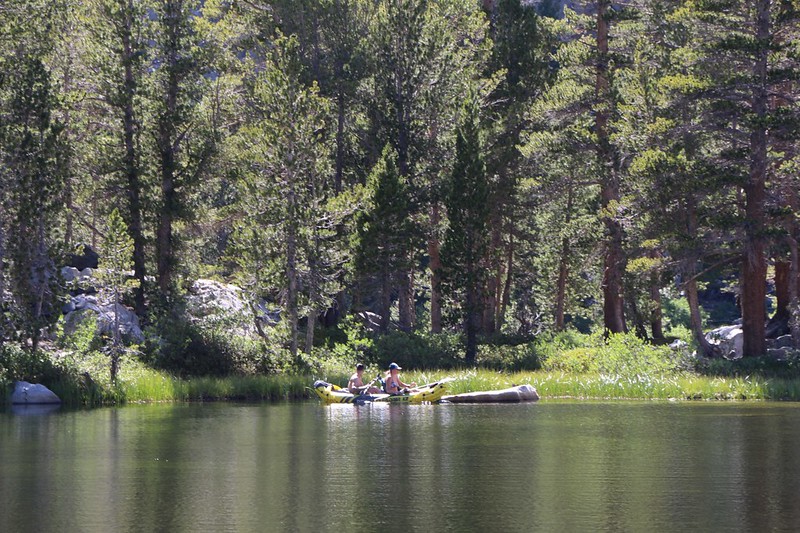 One of our neighbors had an inflatable kayak brought in on muleback, and they paddled it around on Fourth Lake

Early evening panorama from our base camp

We hung out and watched the lake for a while.  It was a beautiful afternoon.  Vicki took a nap while I headed over to the creek for two more gallons of water.  I purified it afterward, in camp, using chlorine drops.  We eventually ate dinner and ate it looking over the lake.  We headed to bed when the sun went down behind the mountains, leaving the valley in shadow.  The air was already cooling, and it was nice to get into our warm clothes and snuggle together in the sleeping bag.  We read our books, and talked about tomorrow’s hike to Sam Mack Meadow.  Vicki was feeling acclimated by now and she seemed excited to check it out.

This was our second evening here at Fourth Lake, and thus far we hadn’t felt bored at all.  We decided that we could easily get used to living in a place like this!