We hiked from our base camp on Fourth Lake all the way back to the North Fork Big Pine Creek Trailhead parking lot, our longest day of the six day trek, at seven miles and 3000 feet downhill.  The downhill part was what really mattered, and we expected to make good time.

Now, Vicki and I really took the idea of Covid-19-style “Social Distancing” in 2020 very seriously, and it was often difficult to get other hikers to care enough about it.  Many didn’t even think about giving us a chance to step off to the side of the trail.  Since we couldn’t really change how others (mis)behaved, we decided to proactively defend ourselves from them, by avoiding everyone as much as possible.  So we decided to wake up at 3am or so, and start hiking in the dark at 5am.  We’d see how far we could get before we met up with anyone! 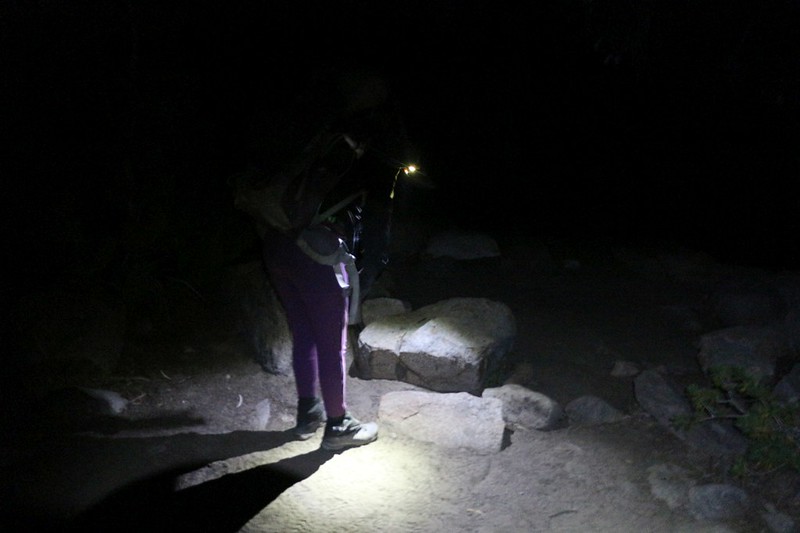 We woke up super-early on our final day in the wilderness, and began hiking in the dark at 5am – We Must Go! 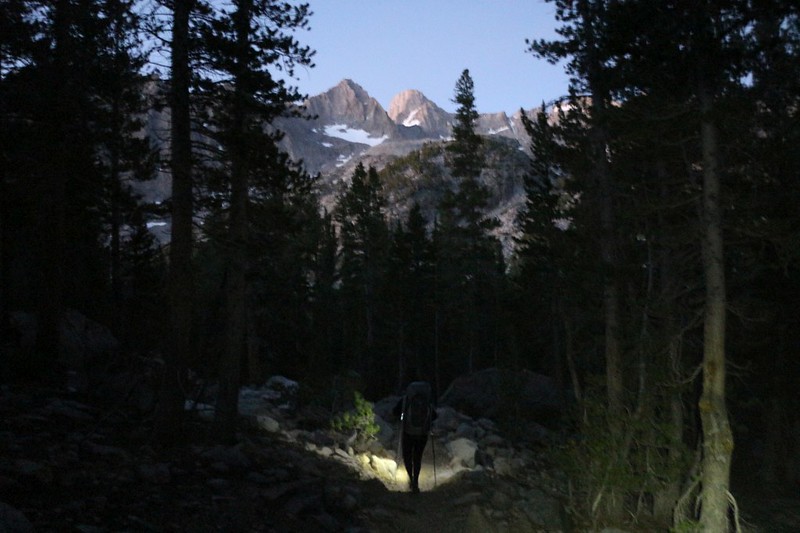 Well, our solitude only lasted about 45 minutes.  We met a like-minded group of young guys that were heading up to the Palisade Glacier.  They had started hiking from the trailhead before we even woke up, making a true Alpine Start, and their ultimate goal was to climb Thunderbolt Peak, one of the fourteeners!  We were suitably impressed at their drive and endurance, and wished them well.  After that, we had the trail completely to ourselves for a long time.  We checked out third lake for a moment, and continued onward.  The sun rose as we neared Second Lake, and shone horizontally through the forest, directly into our faces. 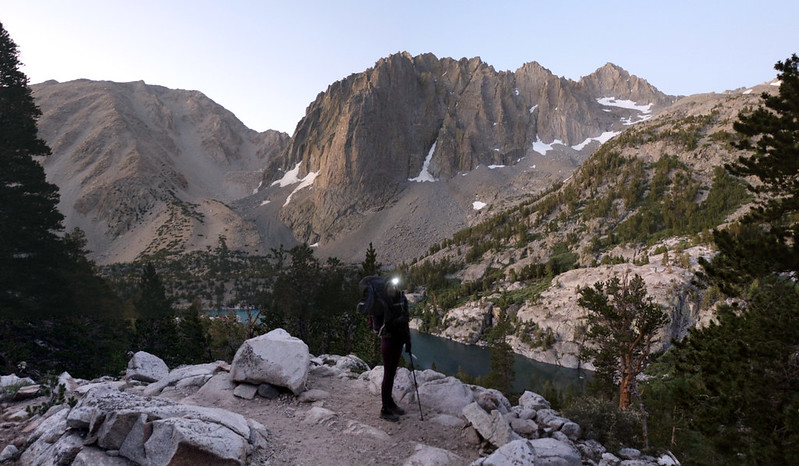 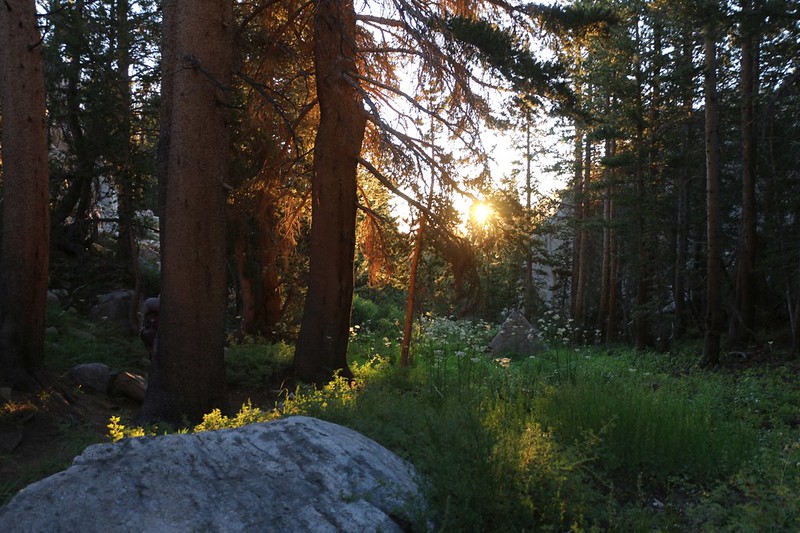 Morning Light through the trees and flowers and ferns 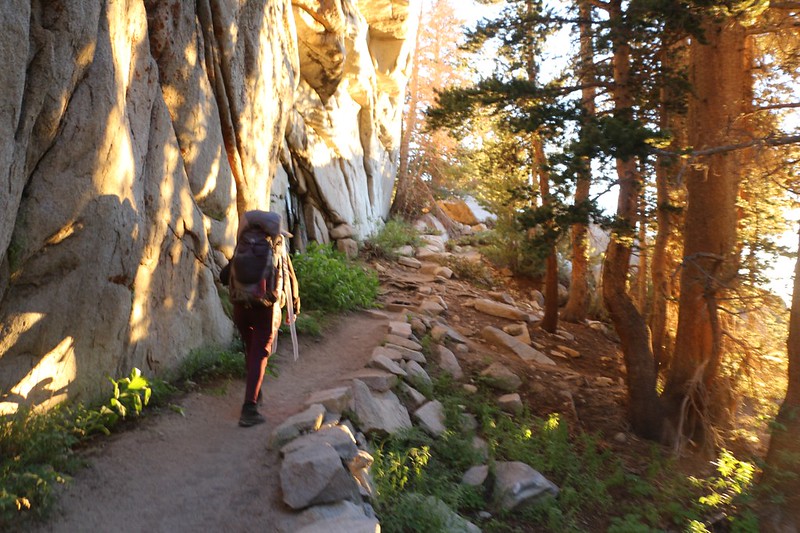 It was 6:30am when we arrived at Second Lake.  The sun was rising higher and Temple Crag was getting partially lit, but the lake’s surface remained in shadow.  We stopped for a quick break and Vicki removed a layer, as she was already getting warmer.  We watched the trout jumping for insects and leaving rings of ripples on the surface of the lake.  We also said hello to several groups that were camping above the lake, but none of them were even close to being ready to hike.  We were the early birds today. 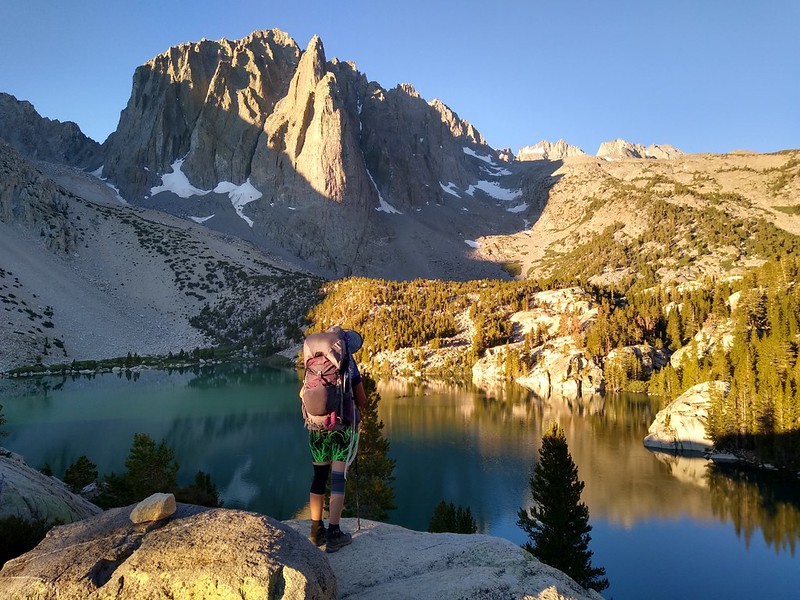 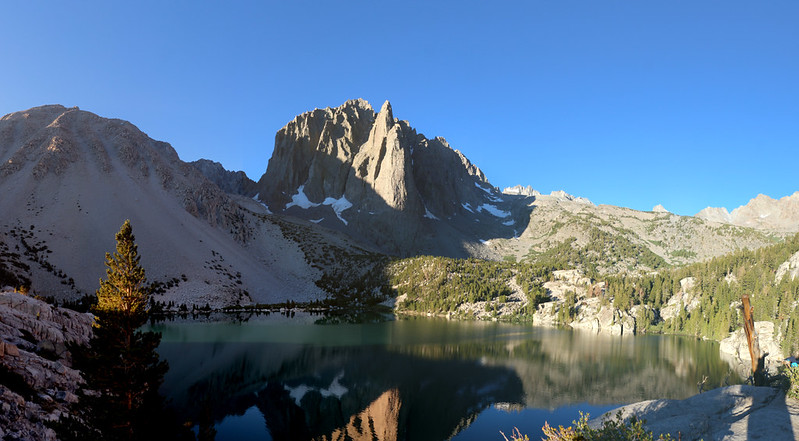 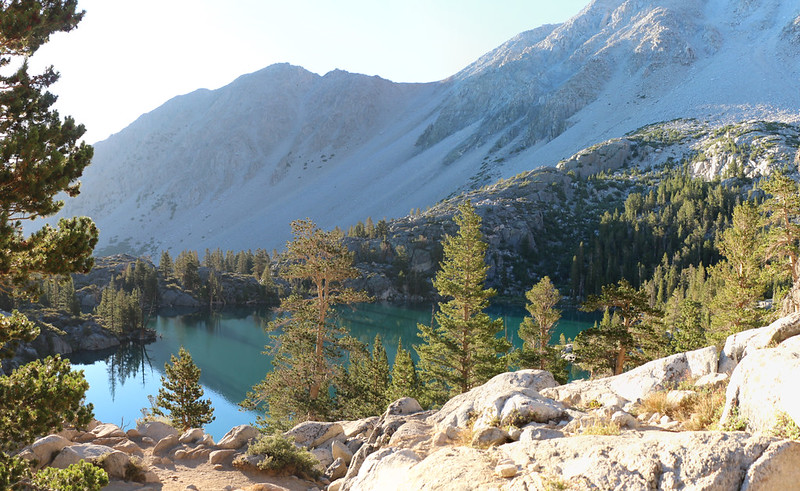 First Lake and Mount Alice in the morning light

It was 7am when we reached the trail junction below First Lake, where Vicki had stopped, totally exhausted and overheated, on our big hike on the way up to the basin.  We commemorated her drive with a kiss, then continued hiking down the trail.  We said a final goodbye to Temple Crag as we continued down the trail.  We entered the forest and passed rapidly through the wet zone of flowers, and soon we were at Lon Chaney’s Cabin again. 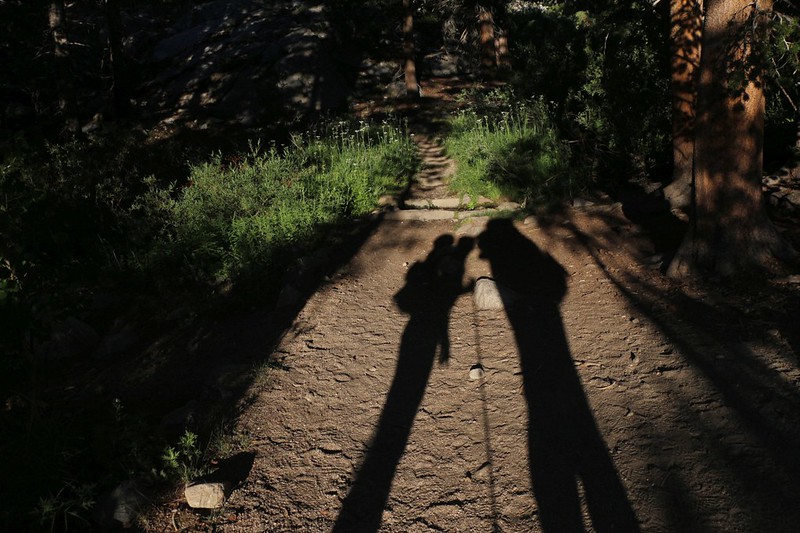 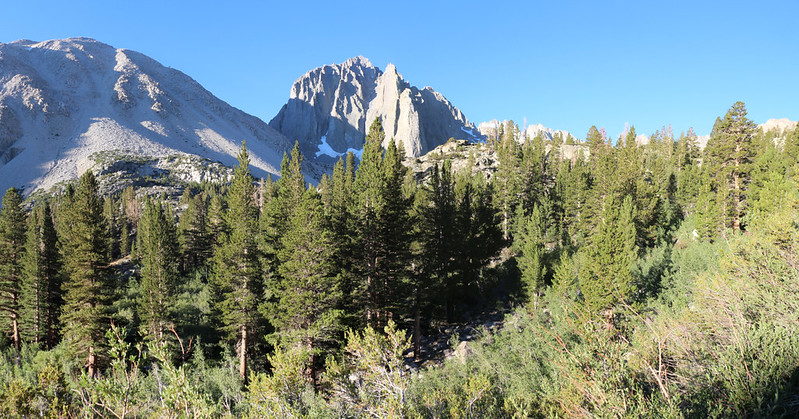 Looking back up-canyon for our final view of Temple Crag 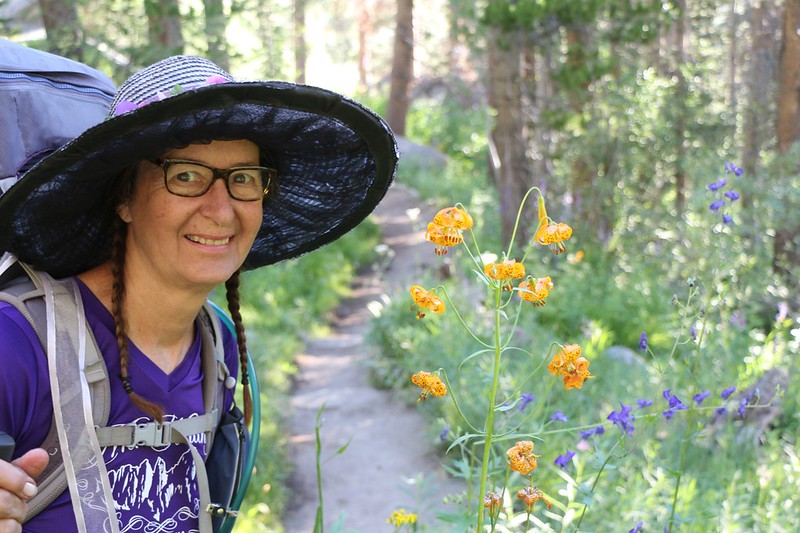 Happy Vicki posing next to some Tiger Lilies 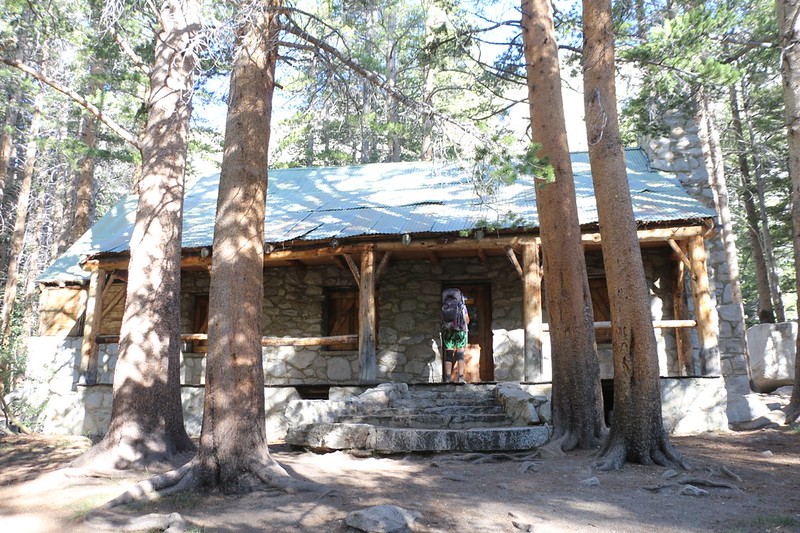 It was just after 8am when we left the cabin, after taking a short boot-off break to cool our feet in the creek.  We knew that we’d soon be meeting up with all the hapless day-hikers heading for selfie-photos at Second Lake, and we were right.  But there weren’t too many as this was a Thursday, and it was still a bit early.  We hurried on.  The sun was already getting hot, as there weren’t many trees in this section.  Vicki kept her head wet with the spray mister, and sprayed her clothing as well, since we were facing directly into the sun.  The air was still a bit cool, thanks to a gentle downdraft through the valley, which helped a lot. 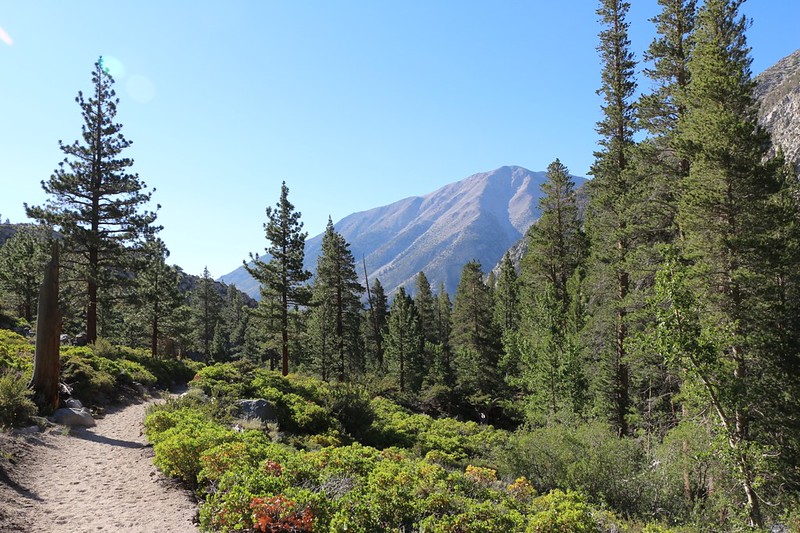 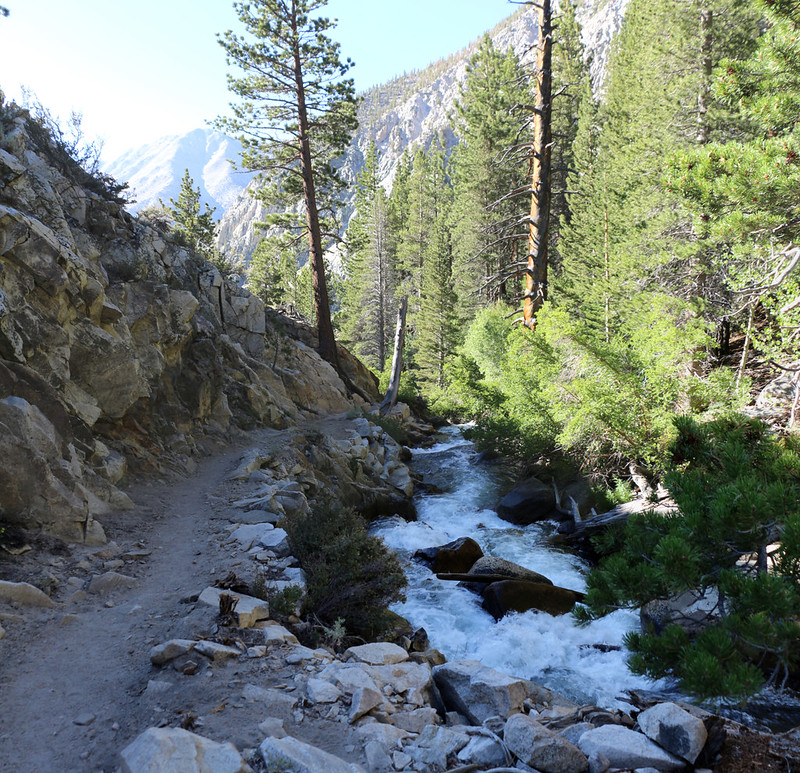 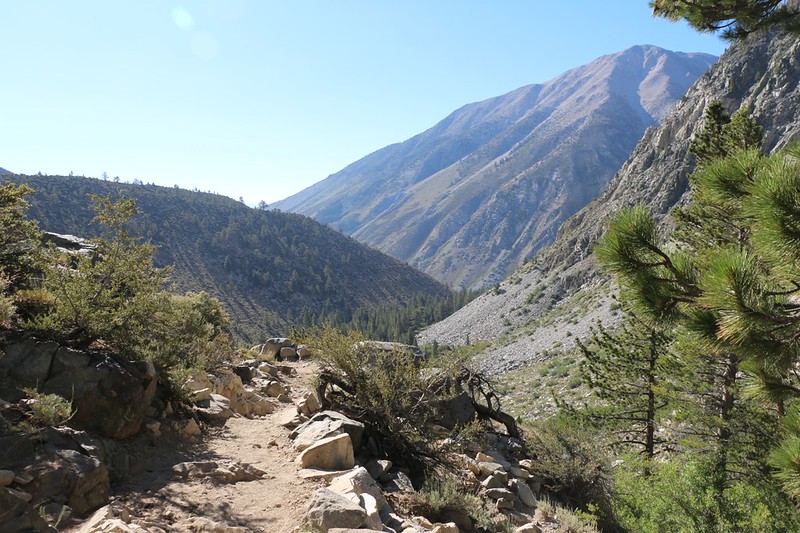 The view from Second Falls. The forest way down below in the cleft is where First Falls begins

We made it to the falls before 9am, and stopped for a short break to enjoy the view.  It was looking to be another warm, cloudless day, and we could see the trail heading along the east side of the valley, which seemingly ended at the drop-off at First Falls, where the North Fork of Big Pine Creek cascaded down to join the South Fork.  After another mile of easy (but hot) downhill hiking, we made it to where the trail passes above First Falls.  We didn’t hike down the steep slope to the falls trail, which was the way we hiked in originally, and instead took a short break and checked out the Clyde Glacier and Middle Palisade which were shining in the sun, in the distance up the South Fork. 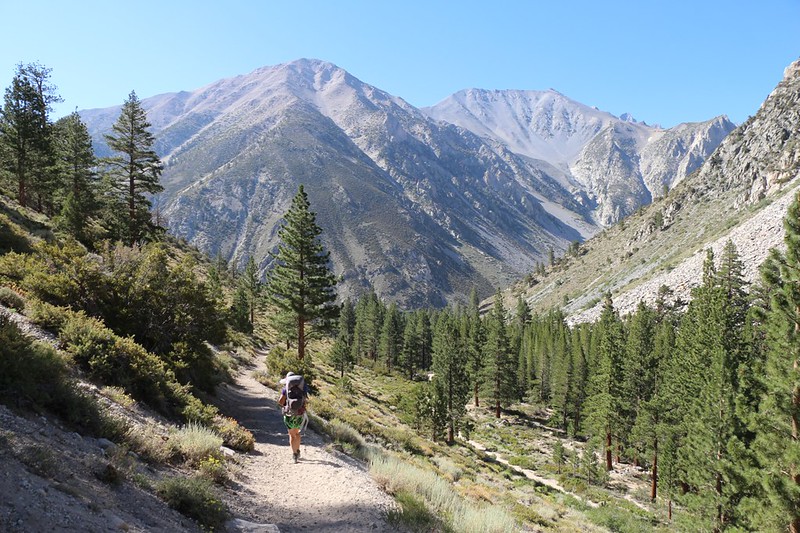 Kid Mountain, Peak 13103, and The Thumb as we near First Falls 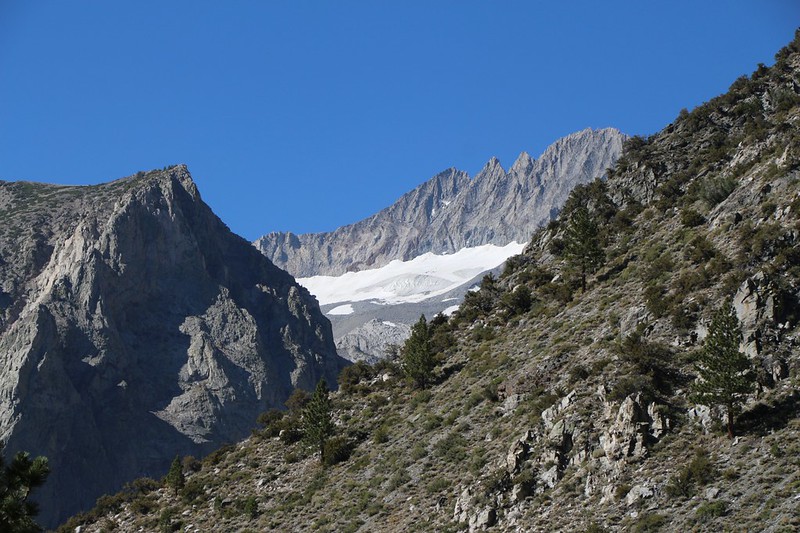 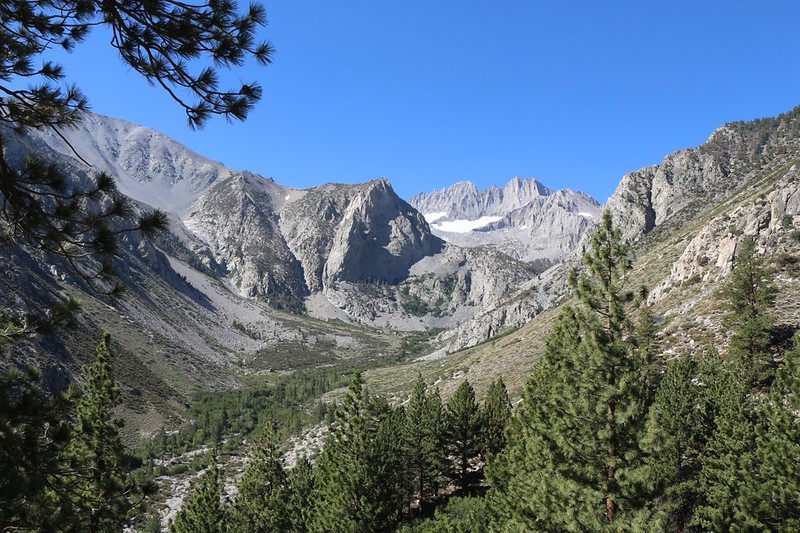 View up the South Fork of Big Pine Creek at the Clyde Glacier, Middle Palisade, and Norman Clyde Peak

It was 10am and the air was hot when we rounded the turn near First Falls.  The trail was on the totally exposed southern slope, heading east above Glacier Lodge Road along Big Pine Creek, and there was absolutely no shade.  Vicki kept squirting water on her head, arms, legs, and clothing, but she still got overheated.  A hot breeze was now blowing up the valley and we were no longer enjoying the cool air of the early morning.  Unfortunately, it was difficult to pass other hikers safely along this stretch, as the trail was only an indentation on the steep slope.  Staying six feet apart meant a difficult scramble, either uphill or downhill, on the hillside.  Luckily, there were only a few groups, and we managed it safely. 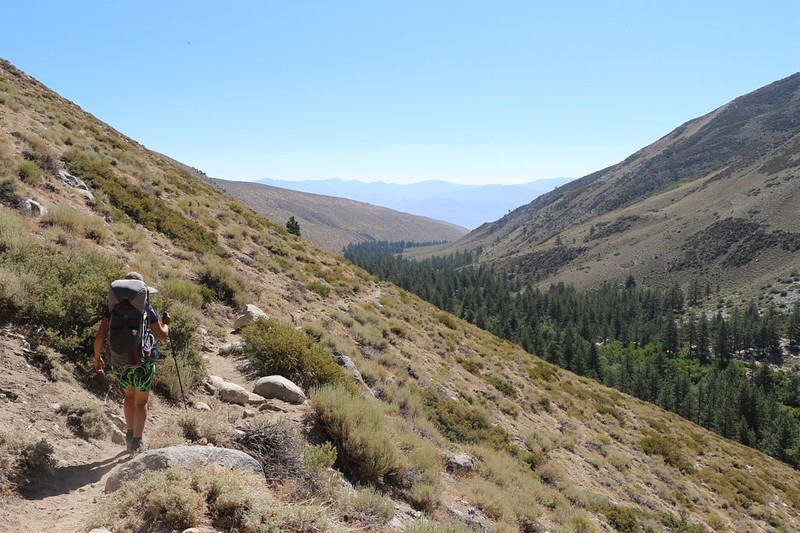 We took one last break in a small grove of pines.  There was shade, delightful delicious shade, and we made the most of it, even though the parking lot was less than a quarter mile away.  Vicki had had enough.  Plain and simple.  So we sat down and took off our shoes and let those hot feet breathe for a while.  It felt great.  This was our final rest on the trail, and it was well worth it.  We weren’t in all that big a rush to enter civilization again, after all.  We hung out and rested until she’d cooled down enough to continue on to the car. 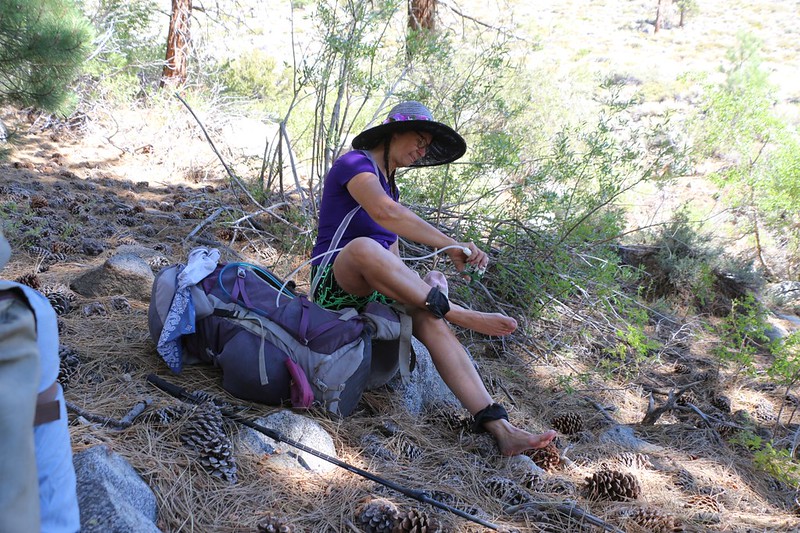 We found a shady grove and took a boot-off break, where Vicki squirted cool water on her hot feet with the spray nozzle 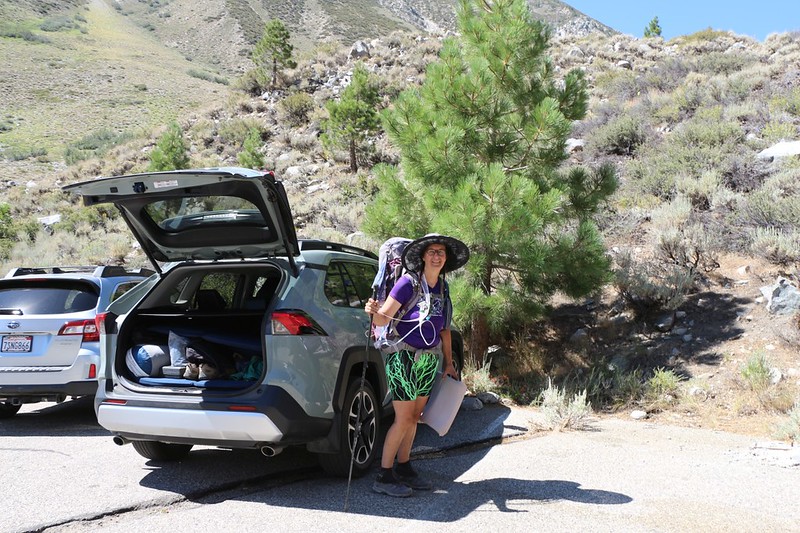 We made it to the car by 10:30am after five and a half hours on the trail.  Not bad!  I got our extra food out of the bear locker and threw our packs in the back.  Then we turned on the air conditioner and sat in the car for a bit.  But it was still too hot in the direct sun.  So we drove down to the main road and found a turnout where we could park in the shade.  Ahhh!  We changed out of our stinky stuff and into “car clothes” complete with fresh shoes.  We weren’t really clean, but we sure smelled a lot better!  I even shaved with my electric razor, as the car had an outlet in the back.  We also got our gear in order for the drive home, with food and snacks and drinks close at hand.

Then we drove south to the town of Lone Pine, and stopped to fill up the gas tank.  I knew that we could make it all the way home from there, non-stop.  I also bought Vicki what she had been dreaming of while roasting on the trail that morning:  Ice Cream! 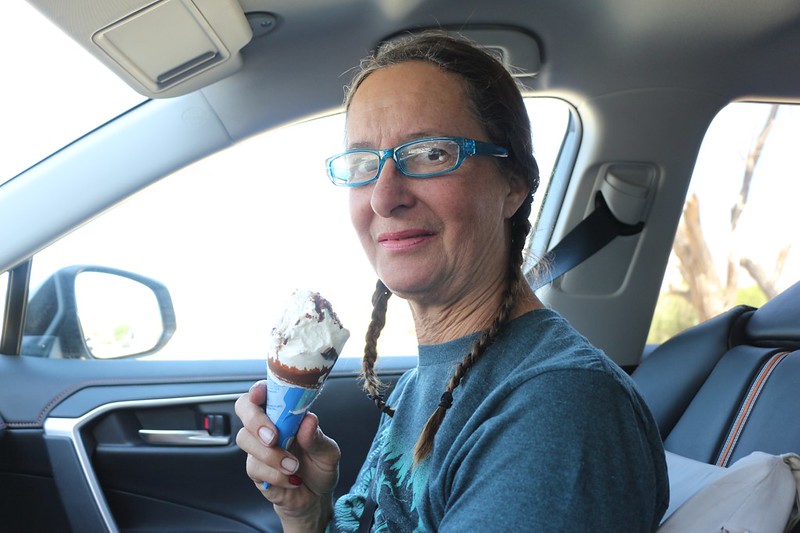 On the ride back to San Diego, we talked about the trip.  We couldn’t think of much of anything that went wrong, except for one or two gear improvements that needed doing.  We made it a practice to immediately record these thoughts on video as they happened, for review when we got home.  Saves wear and tear on the memory.  And then I started talking about our next trip, which was only a week away!  We had so much to do to get ready!  I was already getting excited about heading out into the High Sierra once again.  But Vicki told me to hush.  One trip at a time.  And if anyone deserved a nice long nap, it was her.  So I spent the next hour driving home in silence as she slept.  But it didn’t stop me from thinking about it, that’s for sure!