We backpacked from First Lake to our base camp at Fourth Lake, hiking three miles and climbing 800 feet.  It was a relatively easy day, and Vicki was more than ready to check out the beauty of the Big Pine Lakes Basin.

It was cold that morning at First Lake, so we snuggled inside our sleeping bag with only our noses sticking out in the chilly air.  In fact, we stayed in our tent until the sunlight struck it, which, in our opinion, was still pretty darned early.  It was pure dumb luck that provided an unobstructed view to the horizon in the southeast, and the sun took advantage of it.  There was no point in arguing, so we got dressed in warm layers and went outside to check things out.  Vicki boiled up some water for a hearty freeze-dried breakfast, and I headed down to the lake shore to take some photos.  The air was dead calm, and I got some nice reflections off the lake, with Temple Crag partly lit in the morning light. 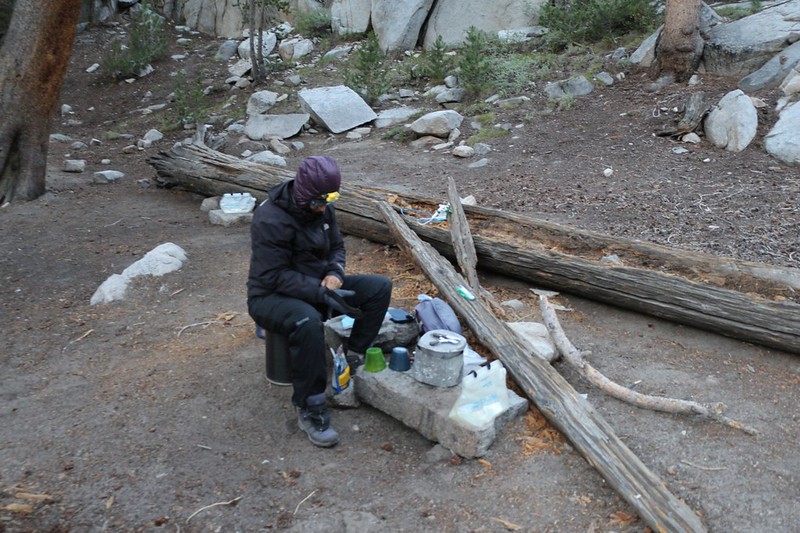 It was cool in the morning as we cooked breakfast 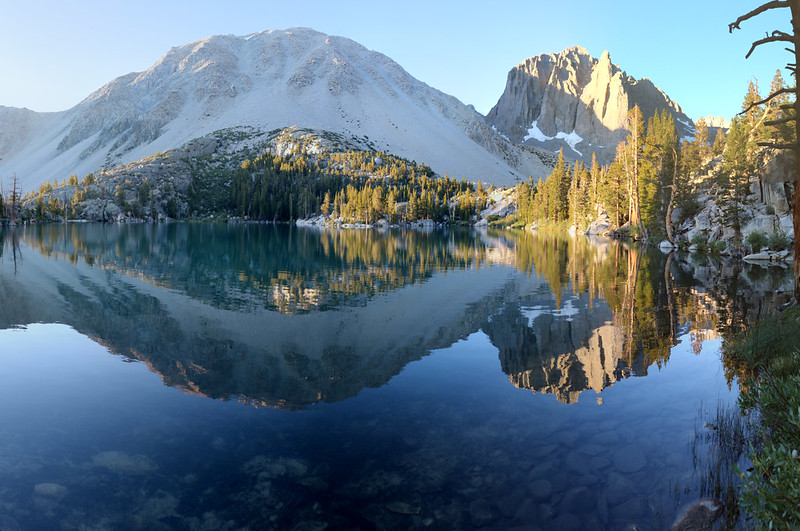 Panorama over First Lake in the early morning sunshine

After eating, we headed back into the tent and lay down under the sleeping bag for awhile.  It was still cold, and we warmed back up.  We were lazy.  Eventually, of course, we packed up our gear and got on the trail.  We were the only ones out at that hour, which was exactly what we wanted.  This area was relatively crowded with hikers during mid-day, because everybody and their mothers wanted to hike here.  They wanted to post selfies from Second Lake on Instagram and Facebook, with Temple Crag looking ultra-dramatic behind them.  But for us, at this hour, it was empty of humans, and we could do our proper 2020-style social distancing.  So we put on our packs and climbed up and out of the First Lake basin and continued upward toward Second Lake. 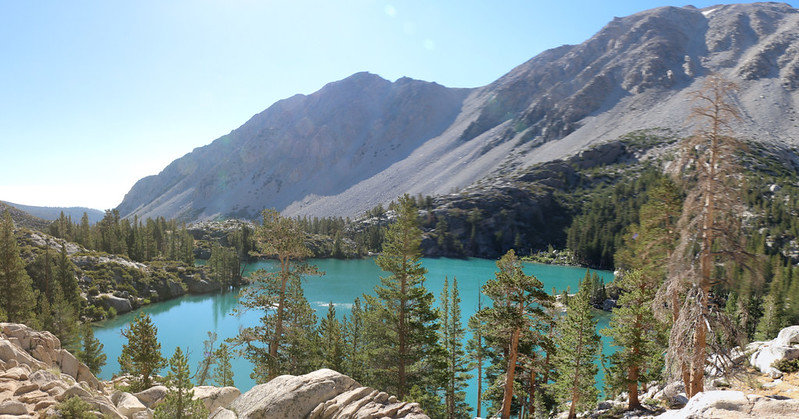 It didn’t take long before we found the “official” photo-op spot at Second Lake.  We were laughing as Vicki did several Instagram-Girl style poses, and I even posed for a photo since I’m rarely in any of them.  And, no, we don’t post to Instagram, so you won’t see these shots there.  After that, we climbed around on some of the neighboring slabs of granite, and checked out the beauty of the lake.  It’s no wonder all the dayhikers head up this way.  It’s gorgeous.  I can’t say that I blame them at all.  It’s a Bucket-List spot in the High Sierra.  In fact, that’s why I brought Vicki here within two years of my first visit.  She just had to check it out. 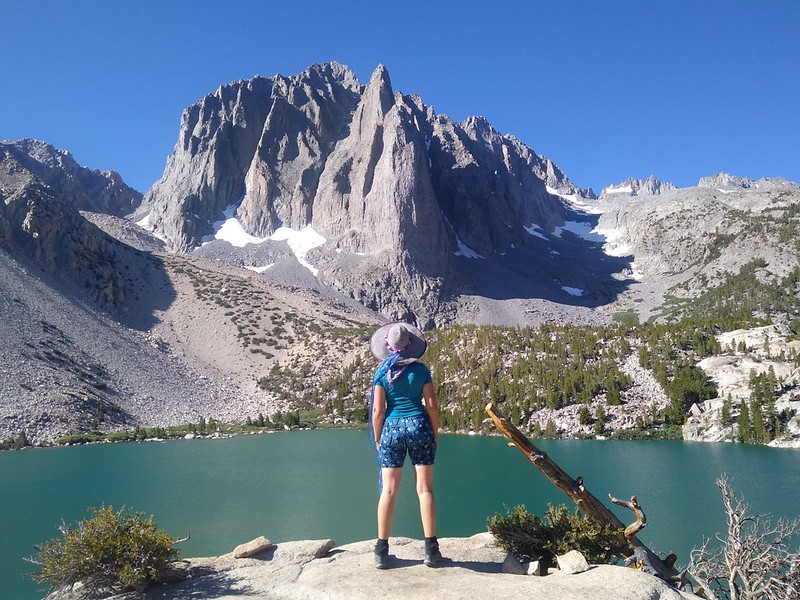 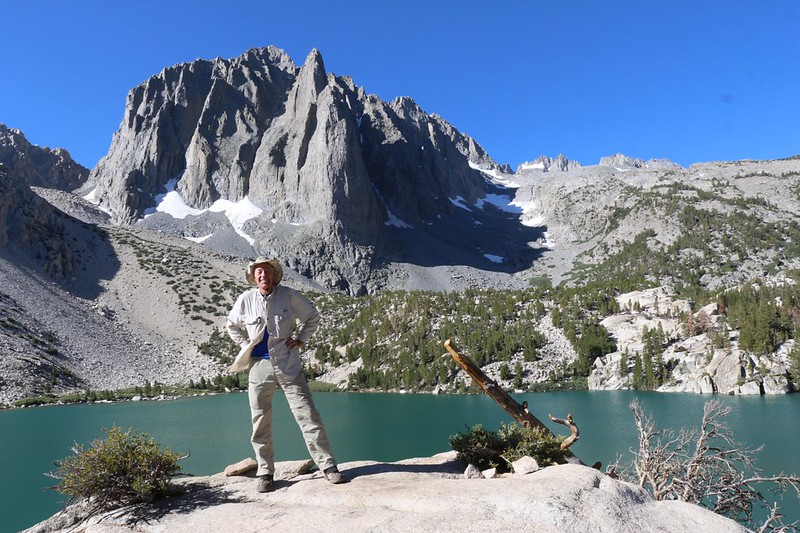 Me posing in front of Temple Crag and Second Lake, but nobody cares about “Instagram Guys”

Panorama view of Second Lake with Temple Crag above it

We hiked high above the shore of Second Lake, and noticed that there were a number of campsites nearby.  Very popular.  And then the trail climbed a bit more, and soon we were up above Third Lake.  There was no shortage of views along there.  This lake was a bit shallower, but it was still the same turquoise color.  Just upstream from here was the main outlet of meltwater from the Palisade Glacier, and the silty “Rock Flour” was reflecting in the sunshine.  We’d only hiked a mile thus far that morning, but we didn’t care, so we stopped for a snack break on a glaciated boulder and simply took in the view of Temple Crag above the lake. 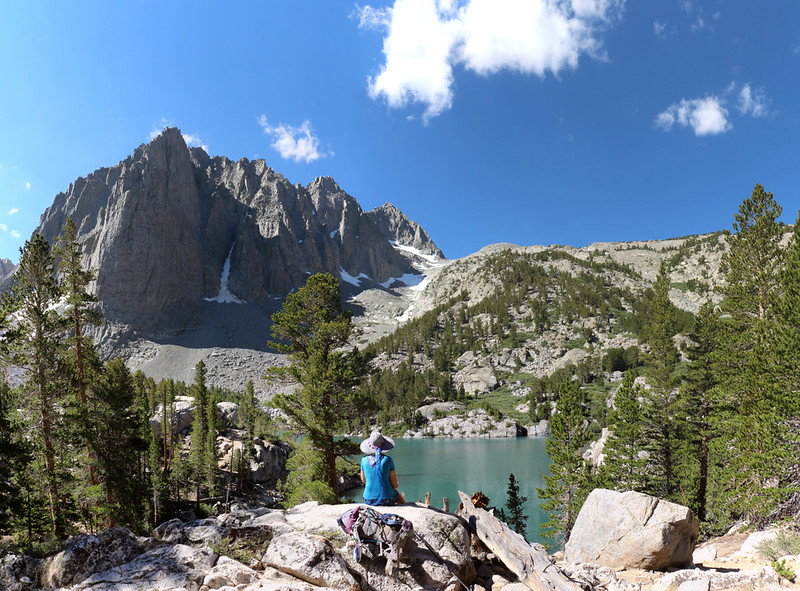 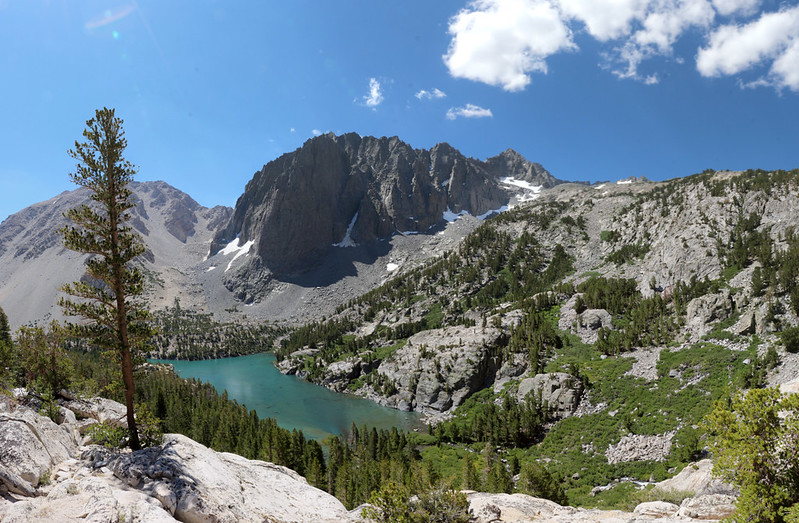 The trail began climbing, high above Third Lake, and the views kept getting better

After a few steep switchbacks with great views, the trail entered a forested area and roughly paralleled Big Pine Creek, which remained far below us in the valley.  It was getting a bit warm by this time, but Vicki was ready for it and kept herself cool with her spray hose, and even soaked her hair in the small outflow stream from Fourth Lake.  We took plenty of short breaks in the shade of trees, and continued upward on the trail.  This section was our main climb of the day, about 500 feet of ascent, and it went by quickly enough. 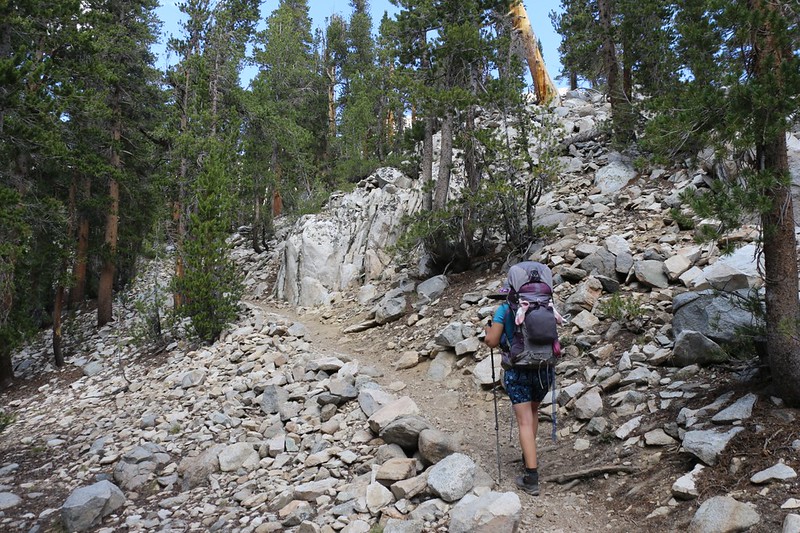 As we continued hiking to Fourth Lake, the trail climbed steadily through the forest

We bypassed the side trail to Fifth Lake and soon arrived at Fourth Lake.  Unlike the glacier-fed lakes, Fourth Lake’s water was a normal color, as it was fed from Spring snowmelt on the south-facing slopes of the basin, which get much too warm, year-over-year, to support ice accumulation.  I pointed out to Vicki the granite cliffs on the north shore of the lake, and stated that I wanted to camp up there, with a view of the lake.  She groaned at this, as it meant a bit more climbing, but I assured her that it would be worth it.  I had scoped that area out back in 2018, and I knew that I wanted to camp up there someday.  And today was that day! 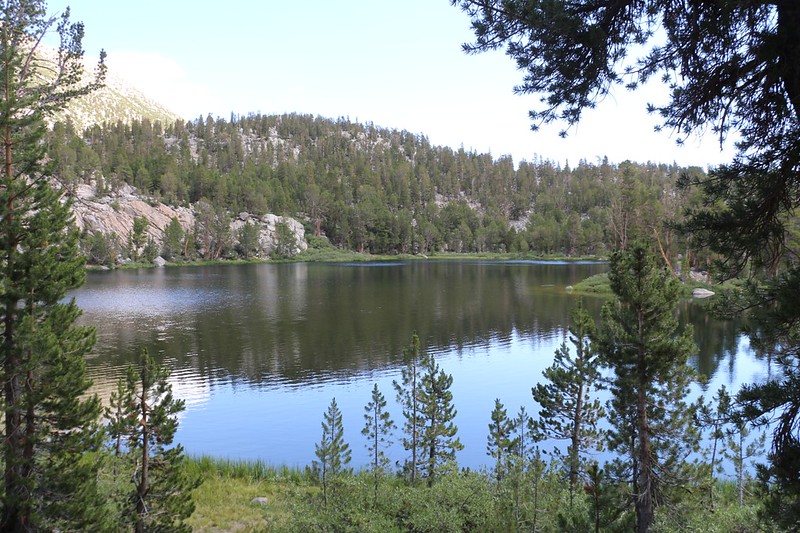 The trail continued around the west side of Fourth Lake 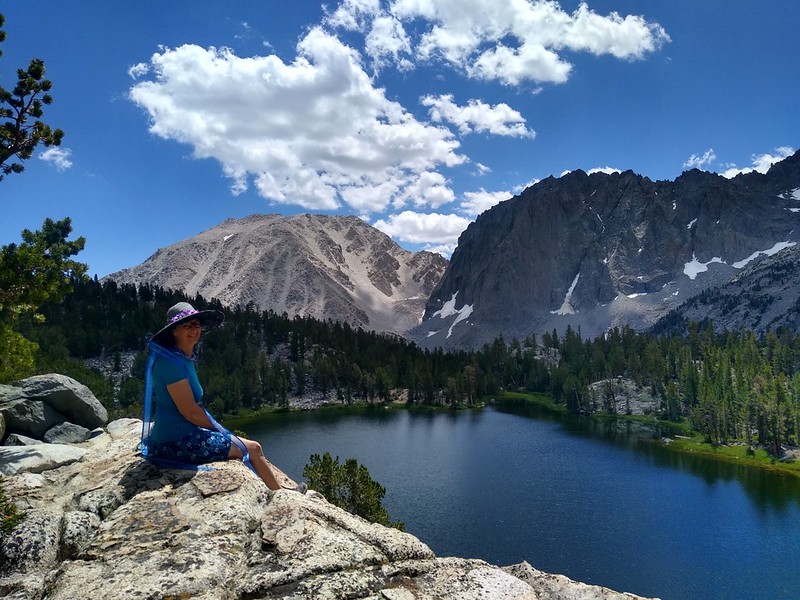 Happy Vicki posing at our lunch spot on the northern cliffs above Fourth Lake, with Temple Crag in shadow on the right

Just look at that view!  It was truly awesome, and well worth the climb to get there.  Lakes, Fourteeners, and Glaciers.  This place had it all!  We could see the bergschrunds beneath the chutes of the U-Notch and V-Notch, and parts of the Palisade Glacier, which is the largest glacier in the Sierra Nevada.  I got out my PeakFinder app on the phone, and we sat on the clifftop, identifying all the local mountains while we ate lunch.  It was turning out to be a great day, and Vicki was really happy.  She originally thought that she might not be able to make it up here, but a bit of route-planning and the luxury of extra days had made it all possible.

There was already a group camping up on the highest part of the cliff, and we didn’t want to camp too close to anyone.  Also, there wasn’t much shade.  Since we were trying to establish our Base Camp for three nights, we needed to find the best possible spot.  So we left our big packs behind, and began heading east along the path above the lake.  And it wasn’t looking too good, as there weren’t any flat spots to be seen.  It wasn’t until we got to the furthest end that we discovered a lovely spot.  It wasn’t quite as high up, but it had plenty of morning and evening shade, not to mention excellent views.  Vicki stayed in camp while I walked back and forth two more times to get our backpacks.  She was feeling the increased elevation, now that we were at a lofty 10,800 feet altitude, and I didn’t mind a bit more hiking.  Then we set up camp, and we did it right. 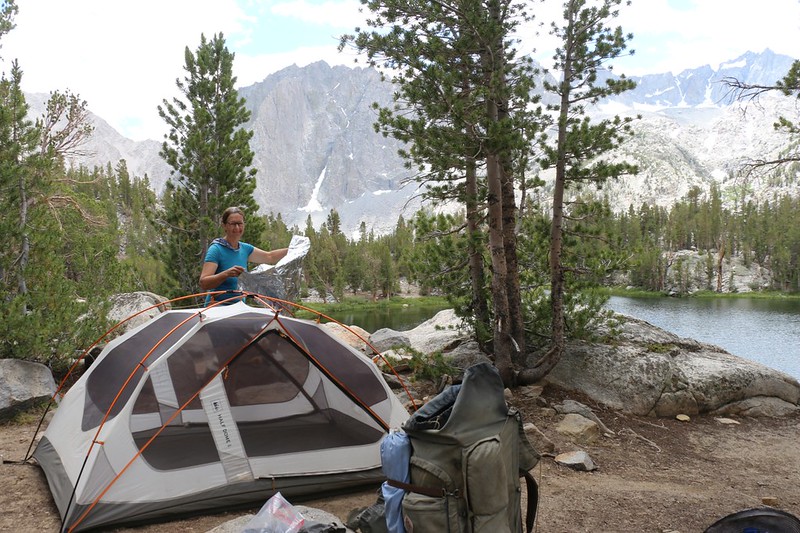 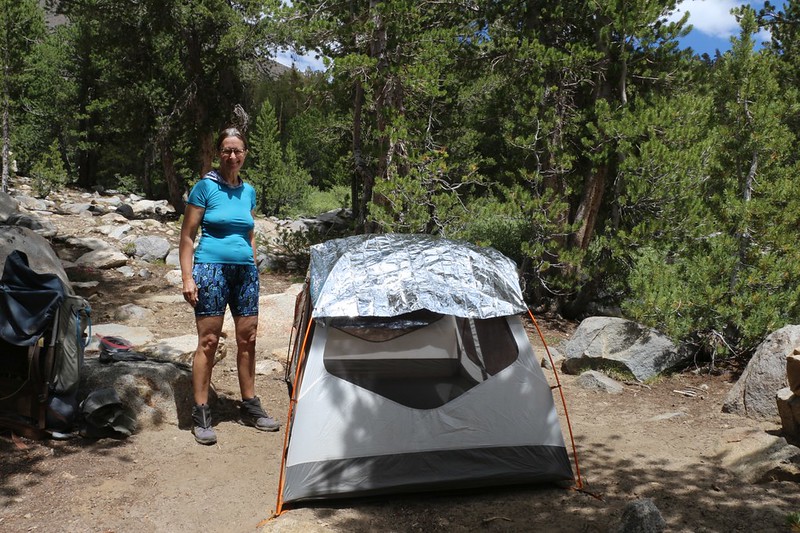 Once everything was ready, we went inside the tent.  I read my book and Vicki took a short nap.  Soon after, we headed back to the main trail, where it crossed a small watercourse up above the lake.  This looked like a perfect spot to filter some water.  Then I carried it back to camp.  After that, we spent the rest of the afternoon simply sitting up on some shady boulders, looking out at the lake and all the scenery.  We took out the map and planned what we wanted to do for the next two days.  We decided to hike around the upper basin the next day, checking out all the other lakes in the area.  We’d save the tougher hike to Sam Mack Meadow for the following day.  By then, Vicki would surely be fully acclimated, and we’d both have a great time.

Later on, while cooking our freeze-dried dinner, one of our neighbors from up in the sunny campsite walked past.  He had been fly fishing along the eastern shore, and was carrying a string of trout!  Freshly caught fish seemed a lot better than freeze-dried food, and we jokingly tried to invite ourselves to dinner.  He laughed, and told us that fly fishing was working great, and that “every cast resulted in a hit.”  In other words, he was hauling in trout as fast as he could cast his line!  Incredible but true.  Subsequently, we discovered that this effect only happened for the fly fishermen; the bobber-and-bait crowd weren’t catching anything at all. 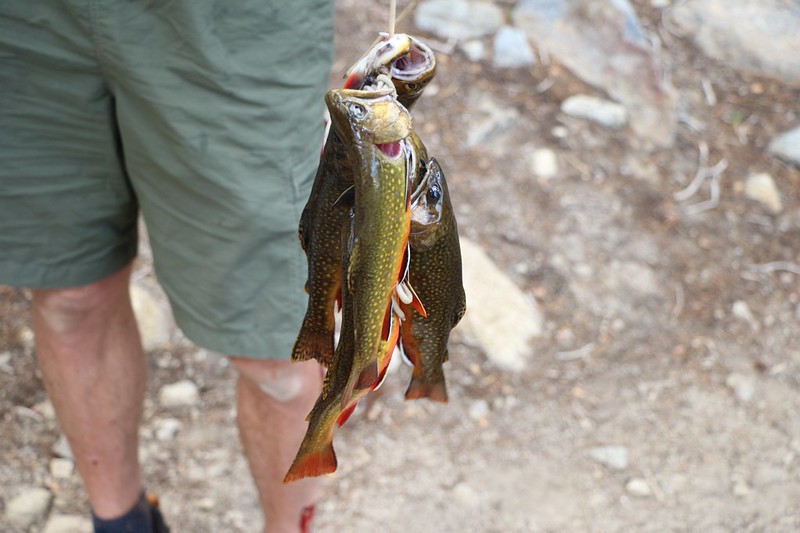 One of our neighbors happened by and showed us his catch of trout from Fourth Lake – fly fishing really works! 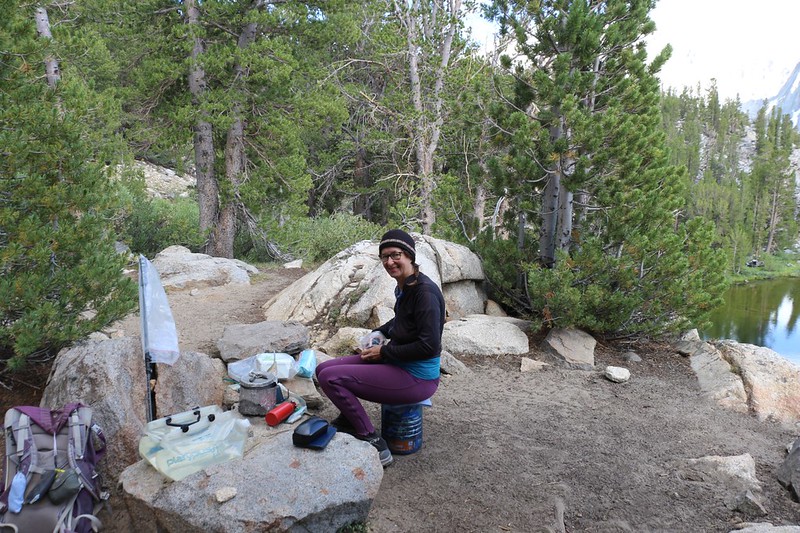 Vicki cooking dinner at our base camp

We ate our homely meal out on our new favorite boulder and watched the evening light on the lake, mountains, and clouds as the sun headed lower in the west.  The breeze had died down, and the lake’s otherwise smooth surface was covered with circular ripples as countless trout hit the surface in search of their own dinner of flying insects.  It was incredibly peaceful, and it was so pretty that I never even bothered to read my book. 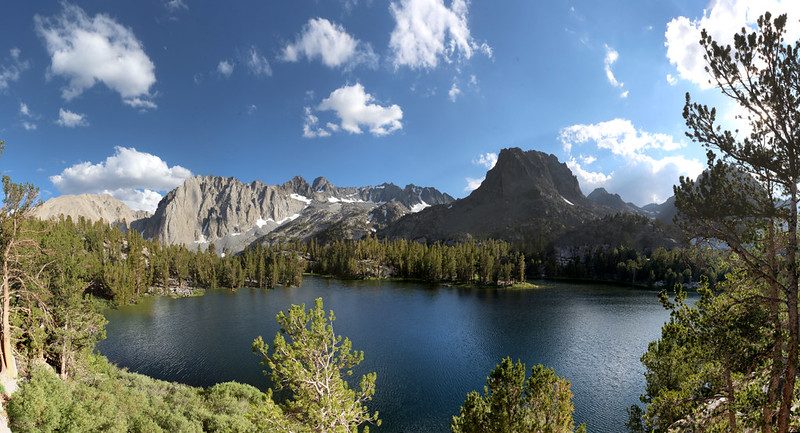 We took our usual after-dinner constitutional by heading further east from our campsite.  We discovered a small creek crossing the trail less than a hundred feet away, and it came down from a brushy meadow that led upward toward Summit Lake.  It was too small to filter water from.  We hoped that we wouldn’t get any mosquitoes from this marshy area.  But we needn’t have worried, as the 2020 Bug Crop was a meagre one, and the season was mostly over for them.  There was so little snow the previous Winter that even the flowers were few and far between.  Bugs and flowers go hand in hand, and the water that fed them had mostly dried up.

We hung out and watched the sunset over the lake until it got too cold to sit still any longer, and we headed for the tent.  Tomorrow was going to be a fun and easy day, and we were really looking forward to it.