We hiked from First Falls to First Lake on the North Fork Big Pine Creek Trail, carrying our big backpacks.  We had a week’s worth of food and we were ready to enjoy the awesome Big Pine Lakes scenery to its fullest.  We woke up at 3am in our “Acclimation Campsite” at First Falls, and started getting ready inside the tent.  It was cold and dark, but we were already feeling good about the day’s prospects.  Our goal for the morning was to get as far up the trail as we could before the Summer Sun beat down and started overheating us.  After that, we’d have to see what happened.  Vicki doesn’t do well in the heat, so if we had to stop and camp early, well, so be it. 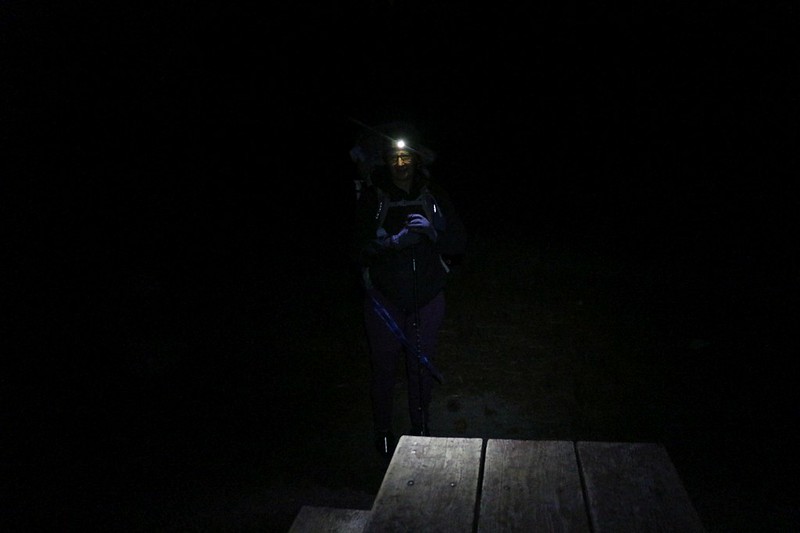 We ate our simple “no-cook” breakfast as we finished packing.  Then we started hiking uphill in the dark, making our slow but steady way to Second Falls.  And it was very peaceful out there in the starlight, with our headlamps shining down on the trail.  Every once in a while we’d stop for a rest and turn them off, and simply listen to the creek far below, and the waterfall up above.  We could smell the chaparral alongside us when we brushed against it, crushing the leaves, along with the occasional mineral-tinged whiff of silica dust that our boots stirred up from the trail.  The light in the east grew steadily brighter as we hiked, and lit the surrounding peaks with a soft alpenglow. 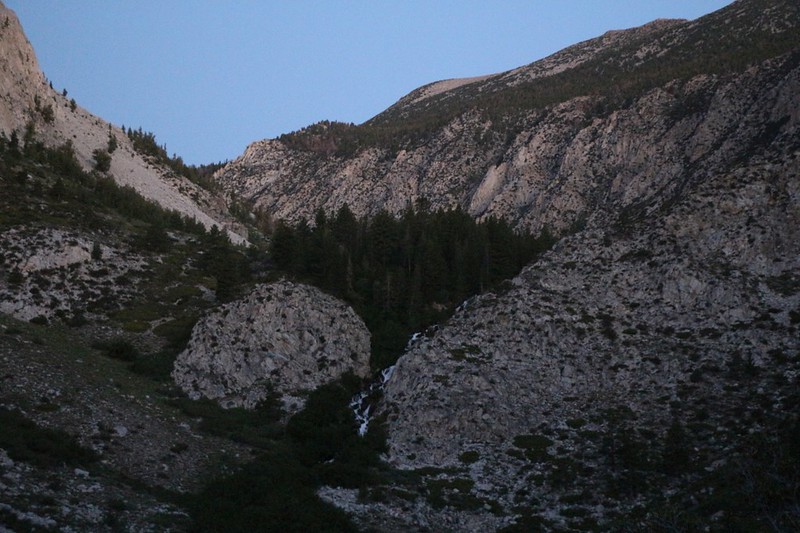 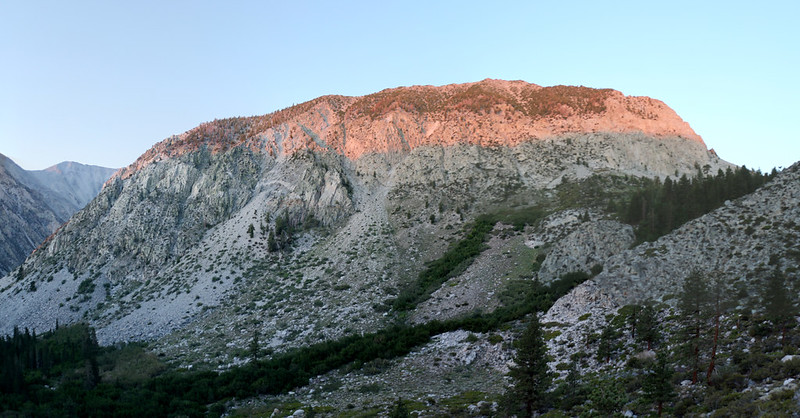 The sun began to rise, lighting up Mount Alice

It took us about an hour and a half to hike one mile and climb 700 feet, but we were happy to have made it to Second Falls before the sun hit us.  This was the most exposed section of the trail, with hardly any trees, and during the daytime it can get brutally hot.  Thanks to our alpine start, we were cool and comfortable, and still wearing an extra layer of clothing.  Success!  We took a longer break at Second Falls, and took off our boots to cool and dry our sweaty feet.  There was a great view of the valley from there, and the falls were roaring so loudly that we could barely hear each other talk. 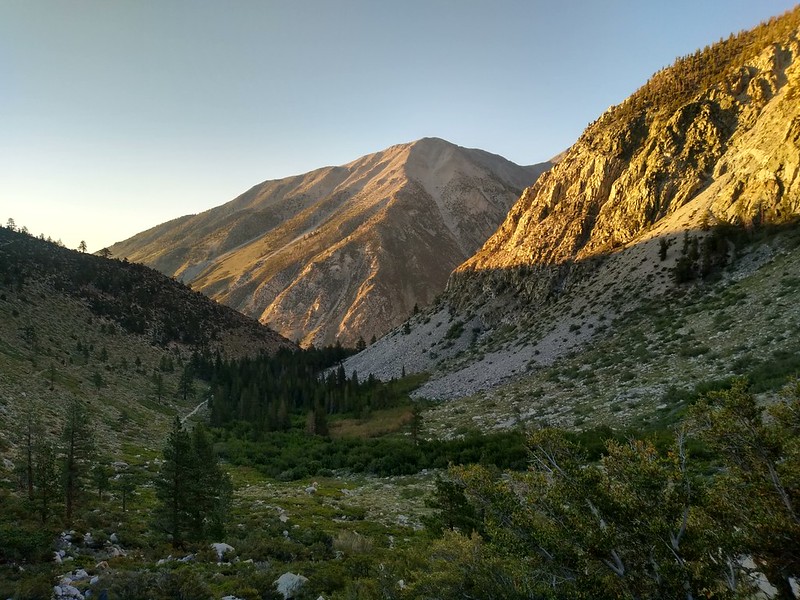 The sun was rising and Kid Mountain was lit, while First Falls remained in shadow below us 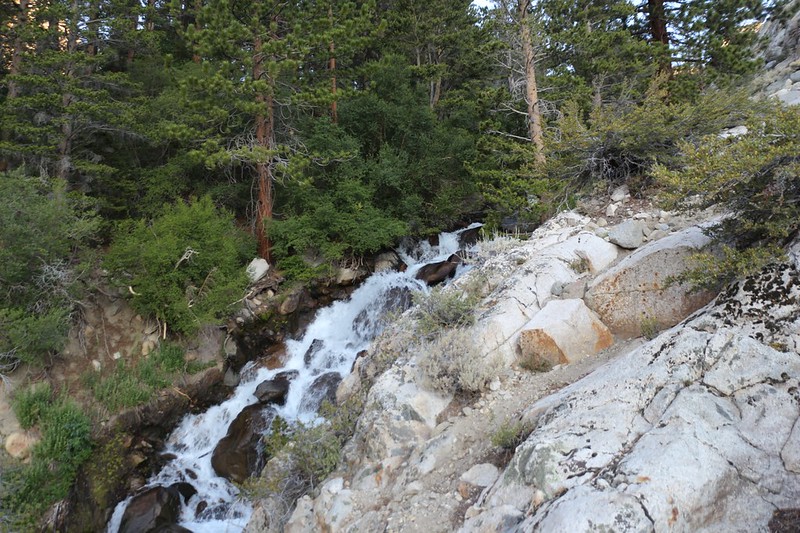 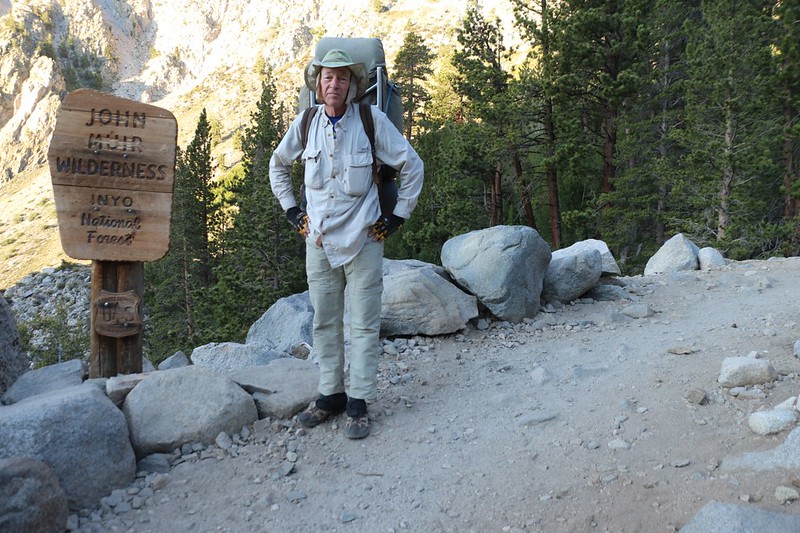 Me, by the John Muir Wilderness sign near Second Falls. Note how a “Cancel Culture” idiot tried to scratch out John Muir’s name.

After that, we were ready to continue onward into the wilderness.  One mile complete, only 2.7 miles to go!  The trail directly above Second Falls was quite fun to hike, as it was created by blasting out the rock next to the creek, deep inside a steep gorge.  After the gorge, we continued hiking, and the trail entered a lightly forested area.  The sun eventually arrived over the rim of the valley, but we were happy as there were plenty of trees to shade us.  But sunshine was Vicki’s cue to remove the extra layers, and soon she was hiking in shorts. 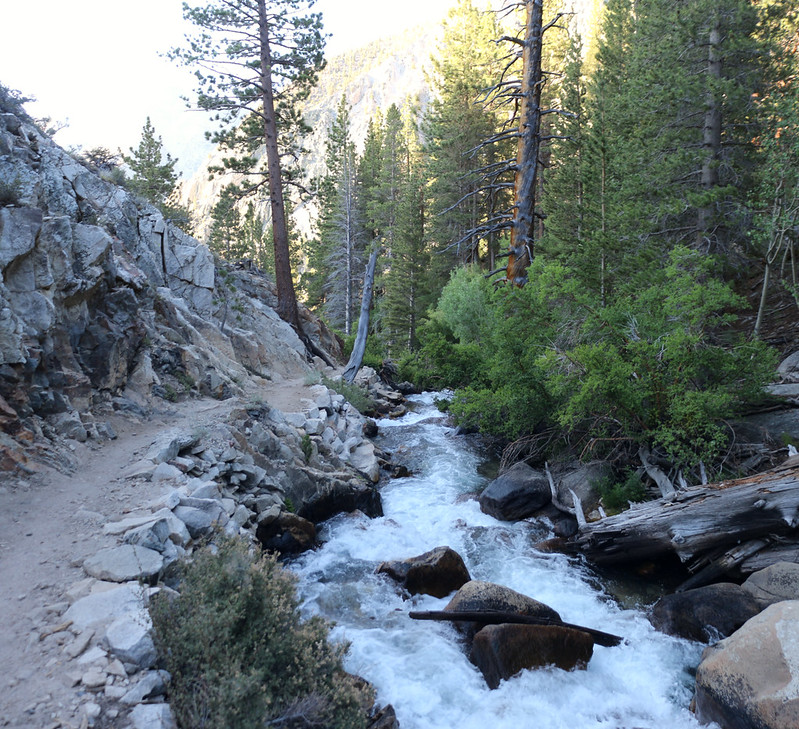 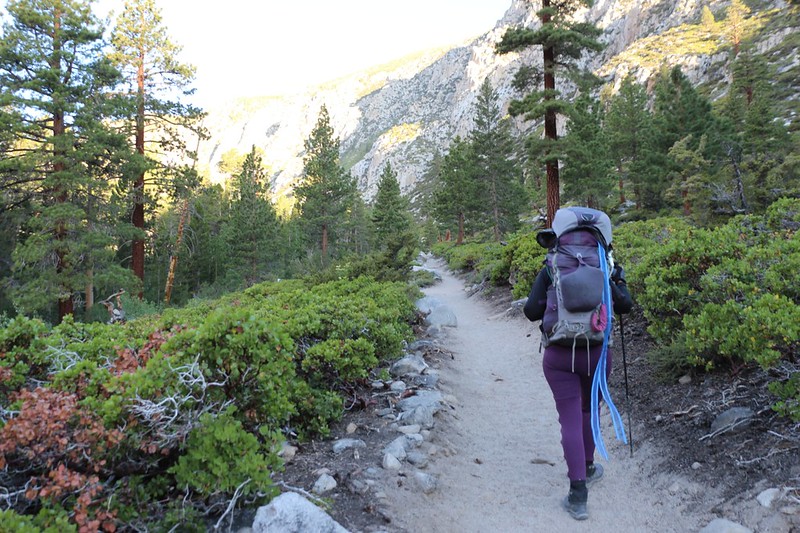 The trail continued uphill through the main canyon, and we knew we’d be hiking in sunlight all too soon.

At about the halfway point on the hike, we came upon a local landmark:  Lon Chaney’s Cabin.  The famous movie star had built it many years ago, and after he died, the cabin passed into the keeping of the Inyo National Forest, to be used as a backcountry Ranger Station.  I’ve been there twice now, and both times it was locked.  It was very well made, with walls of stone and a metal roof.  Oh well, maybe someday I’ll get lucky and get a peek inside. 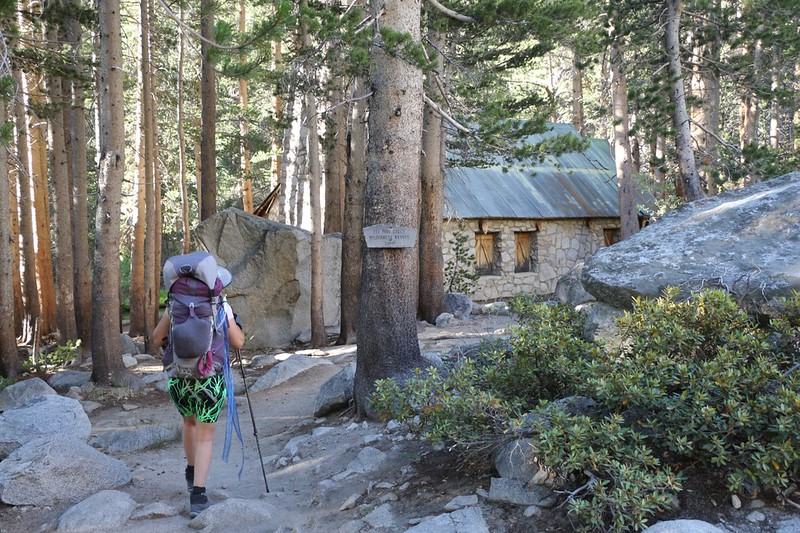 We arrived at Lon Chaney’s Cabin 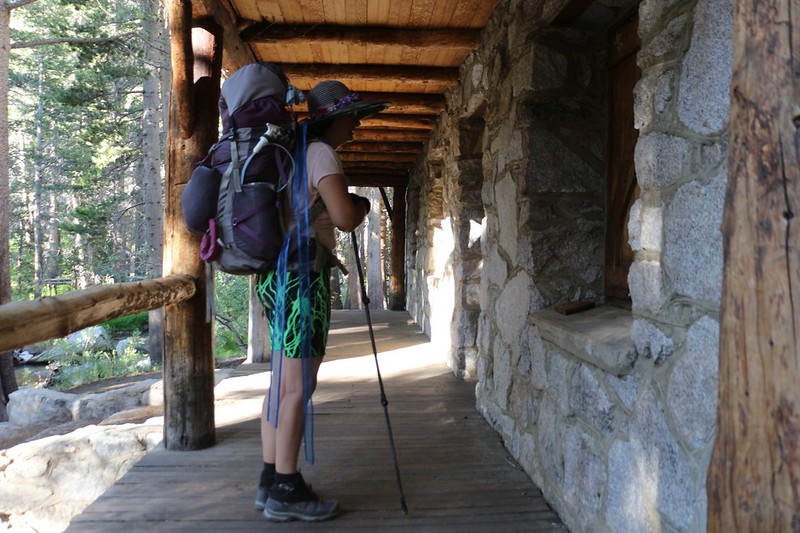 Vicki on the front porch of Lon Chaney’s Cabin, which is now owned by the National Forest Service

On the USGS Topographic Map, the area near the cabin is marked “Cienega Mirth”.  Cienega generally means water seeping from the ground, usually in the bottom of a canyon or on the side of a mountain, and this area was exactly that.  There were plenty of water-loving flowers blooming everywhere, and the surface was dense with plant life.  The air smelled of moisture and growing things, a flower-lover’s delight. 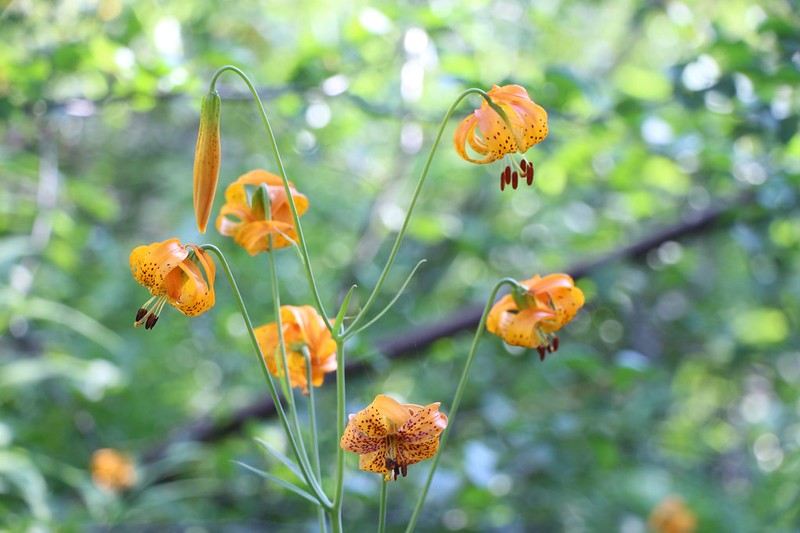 Eventually, of course, the trail left the pretty cienega section, and followed along, parallel to Big Pine Creek, which stayed off to the left, down in the bottom of the canyon.  Unfortunately, the trees also stayed down near the water.  All too soon, we found ourselves hiking in the full sun of midmorning.  It was hot, and Vicki started wilting.  Her bodily thermostat is broken, in that she doesn’t sweat when she should, so overheats easily.  We know about this, and have developed strategies to combat it.  (Like getting up at 3am.)  She kept her hair wet and repeatedly coated her legs, shorts, and shirt with water from the spray mister hose she carries, trying to keep herself cool and hiking.  It helped a lot, but it was getting way too hot.  The trail turned a corner and we got our first view of Temple Crag, and that cheered her up, because it meant that we had reached the basin and were nearing our goal, but it didn’t cool her off. 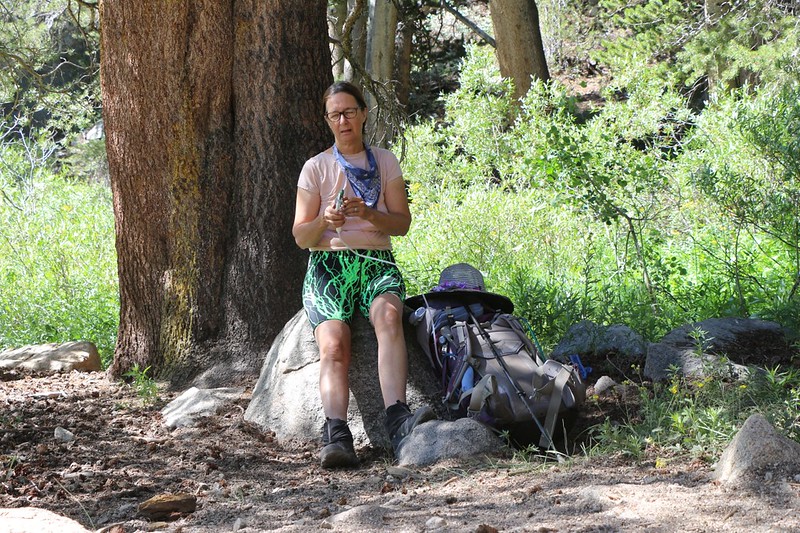 Vicki got tired and overheated from the last section of exposed switchbacks just below First Lake. That’s her spray mister.

After one final steep section of trail, Vicki was toast.  We saw a nice rock in the shade of a big tree where the trail to Black Lake begins, and Vicki sat down on it immediately.  I helped her take off her backpack.  I could tell by the look on her face that she was done for the day.  She had no more to give.  So I got out my gps and checked things out.  We only had 0.15 miles to go!  And most of it was flat!  But this news had no effect on Vicki.  She was in some sort of zombified state that I’d seen before.  The only hope was for her to take a long nap in the cool shade.  But we were so close that I really wanted to get to camp!

So I told her to wait while I hiked off to check out the campsite at First Lake.  I carried my big pack, of course.  And I found a great spot with plenty of shade, just off the lake.  I put down my pack to claim the spot and hurried back to Vicki.  She hadn’t moved.  I put on her backpack and helped her to her feet.  “Just a little bit further now, and you can have a big nap in the tent,” I spoke to her, soothingly.  She’s a real trooper, and without the weight of the pack she did a whole lot better.  Soon we were hiking down the final slope toward the campsite.  She was so relieved.  She rested on a log while I set up the tent and blew up the air mattresses.  Then she got inside and slept for over an hour.  All told, we had hiked for six hours, and had arrived before noon.

The hardest part of our week-long trek was over.  After this, our hikes were going to be easy and fun, every single day. 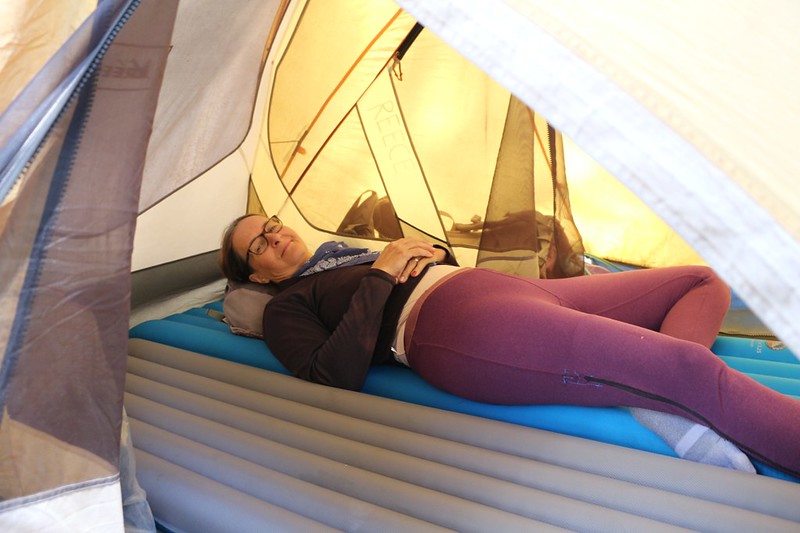 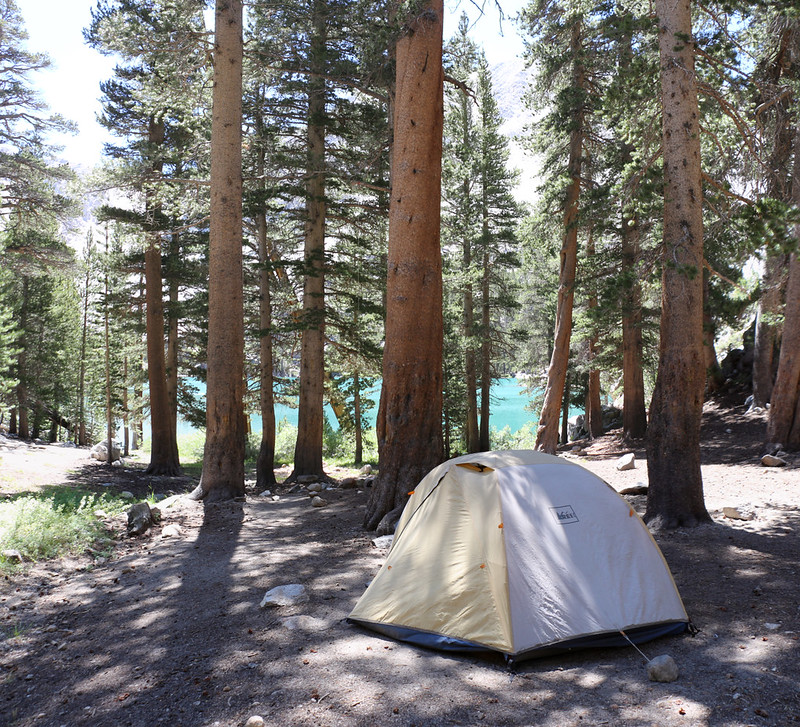 While Vicki was napping, I went down to the shore of First Lake and took some panorama shots.  This lake has the characteristic turquoise color that occurs when the waters are derived from glacial snowmelt.  Supposedly, the glacier’s action caused the granite beneath them to erode into what is called “Rock Flour” and these particles are so fine that they don’t settle out for a very long time.  The sunlight on the lake hits the rock dust and causes that amazing color. 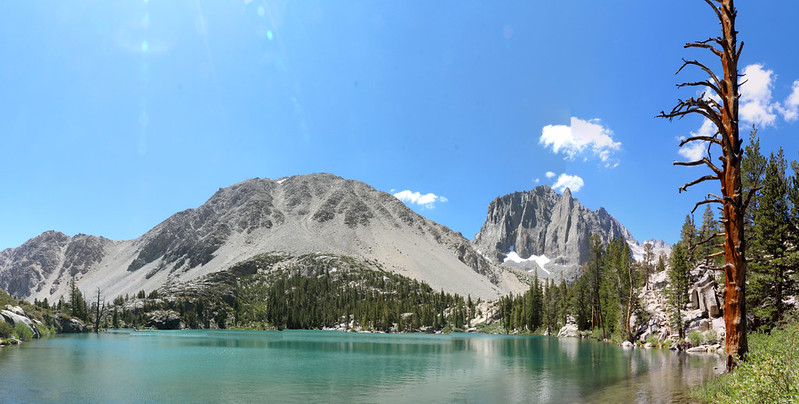 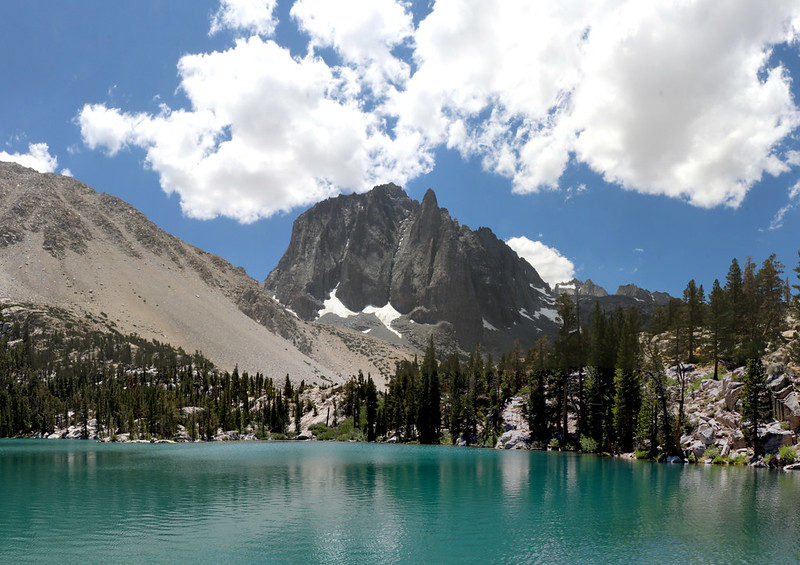 When Vicki woke, we went down to the lake and filtered some of the “rocky” water. and used it for dinner.  I didn’t notice any issues, taste-wise, but I must admit that I love High Sierra Water, as a general rule.  We cooked dinner and ate it down by the shore and simply took in the glorious views.  This was living.  When we arrived, earlier, there were two tents nearby, but no humans.  The humans eventually came back from their dayhikes and packed up all their gear, then headed out.  It was Sunday afternoon, and they probably had to be back at work the next day.  We smiled at each other, as we now had the lake to ourselves, and also because we knew that we could stay up here until our food ran out, if we wanted to.  It’s nice not having a schedule.

After dinner, we took a short constitutional and climbed up on some slabs high above First Lake, and took in the views.  Beautiful! 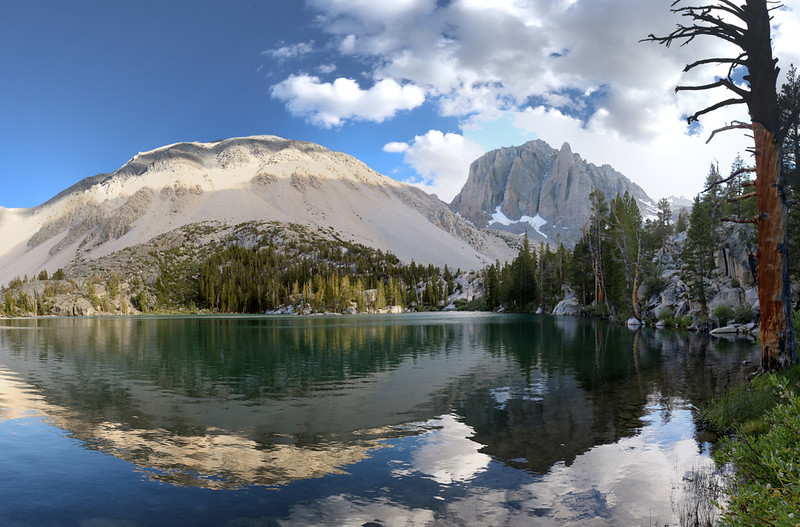 By then, the sun had dropped below the surrounding mountains, and First Lake was in shadow.  It began to get cold, so we headed back to camp.  I took one last panorama photo of the lake and then we crawled into the tent.  It had been a very long day, and we deserved to get as much sleep as we wanted.  We set no alarm, and slept the sleep of the triumphantly exhausted.