Vicki and I decided to spend a week in one of the most beautiful spots in the High Sierra, the Big Pine Lakes Basin, by backpacking into the John Muir Wilderness along the North Fork of Big Pine Creek.  Not surprisingly, overnight wilderness permits are snapped-up almost instantly for this trailhead, and I was one of the lucky few who scored a reservation back in January 2020, exactly six months to the day before we were due to start hiking.  This was a month or two before the Covid-19 lockdowns came along and ruined everyone’s lives.  For us, that meant that the Inyo National Forest was closed.  At least temporarily.  Luckily, three months later the Powers-That-Be decided that backpacking in the middle of nowhere was perfectly safe, and we were able to do all of the hikes I’d planned for the season.  Let’s face it:  2020 was a weird year, but the two of us found a way to have fun!

I had done this hike back in 2018 with my son, his friend, and two dogs, and I knew that I wanted to give Vicki a chance to check it out.  It was that beautiful.  But the problem I faced was the difficulty of the hike.  There were 2500 feet of climbing to be done in order to reach the main basin (where the lakes are), and this was just beyond Vicki’s capabilities.  So I wracked my brains and stared at maps until I came upon a threefold solution.  The first aspect mainly depended on breaking the climb into two parts (less climbing per day).  The second aspect was getting Vicki acclimated to high altitude beforehand (we would be camping and hiking at 11,000 feet elevation), because she wouldn’t be able to climb any feet at all if she couldn’t get enough oxygen into her lungs.  The third aspect was spending yet another day up high in the mountains before we even began the initial hike.

Our permit was for Sunday the 26th. so we arrived in the Sierra two days earlier, in order to acclimate.  We drove to Lone Pine and camped up in the Horseshoe Meadows area, at 10,000 feet.  We spent Friday doing a simple dayhike a short distance up the Cottonwood Lakes Trail, which wasn’t easy for Vicki’s lungs.  But that was expected.  We spent the night in the back of the Rav4, and on Saturday morning she was feeling stronger, and breathing a bit better.  After breakfast, we took a much longer dayhike, all around Horseshoe Meadows, and she was definitely doing well.

We got in the car and drove north to the town of Big Pine, then headed up Glacier Lodge Road to the trailhead at 7800 feet elevation.  Interestingly, there were actually two trailheads for this trail.  One was at the “official” hiker parking area, and the other was at the end of the road near the Big Pine Creek Campground.  The one at the end of the road started higher, was considerably shorter, and would also be shadier and cooler.  But there wasn’t any parking to speak of.  So I dropped off Vicki and our big packs at the end, then parked the car back at the lower trailhead.  I secured our car food in a bear locker, then walked up the road for a half mile or so to the end.  Our plan was to get a head start on tomorrow’s hike by climbing up First Falls to the old “Walk-In” campground that was shown on the USGS topo maps.  Technically, it was still in the National Forest, not the Wilderness, and we didn’t need an official wilderness permit to camp there.  That would make tomorrow, the 26th, the “real” beginning of our trek, as that was the official Start Date on our permit. 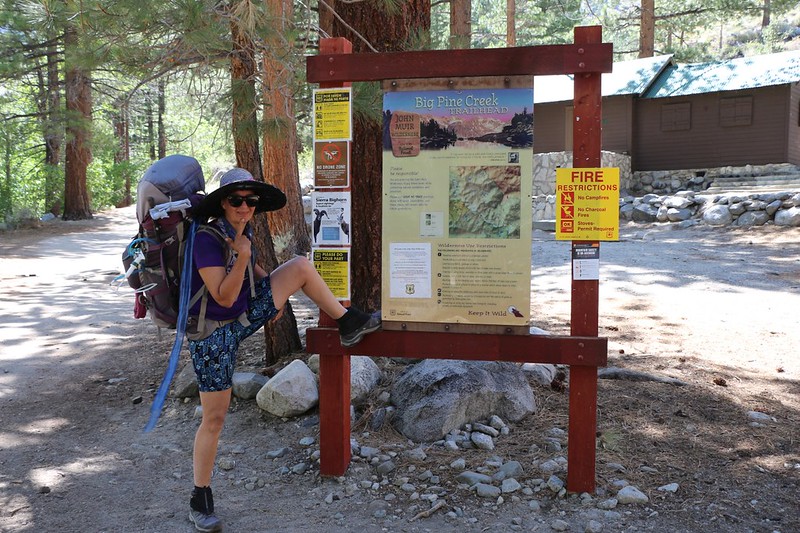 It was midafternoon when we finally started hiking, and Vicki seemed quite perky.  We started up the dirt road along Big Pine Creek (the combined north and south forks) and checked out some of the private cabins along the way.  The creek was flowing quite well, even though 2020 had been a relatively dry year for rain/snowfall.  There were a lot of hikers returning from their dayhikes in the North Fork.  Luckily, there was plenty of room for social distancing without masks on the wide dirt road, which made Vicki happy.  We’re getting on the “old” side these days, and had no desire to get sick. 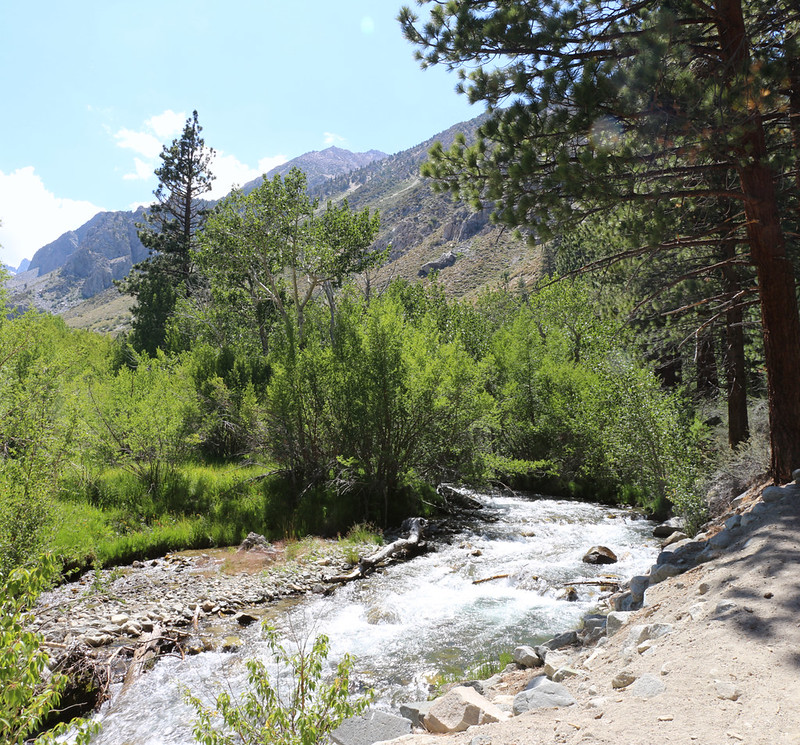 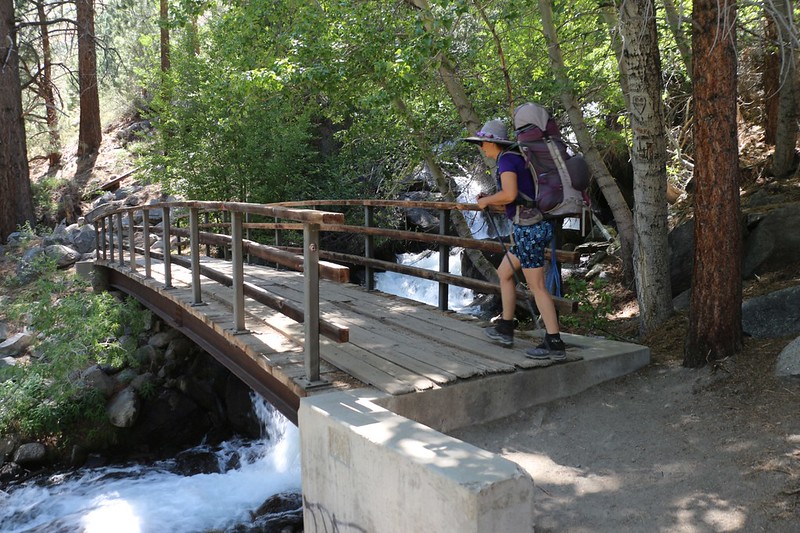 The dirt road ended at the footbridge over the North Fork of Big Pine Creek, and the trail began heading uphill along the side of First Falls, which was really more of a long cascade through the forest than a true waterfall.  But that was OK.  The sound of the water was quite loud.  As we climbed the switchbacks we were treated to great views up the canyon of the South Fork, which eventually led to the Clyde Glacier and Middle Palisade.  But we weren’t heading that way. 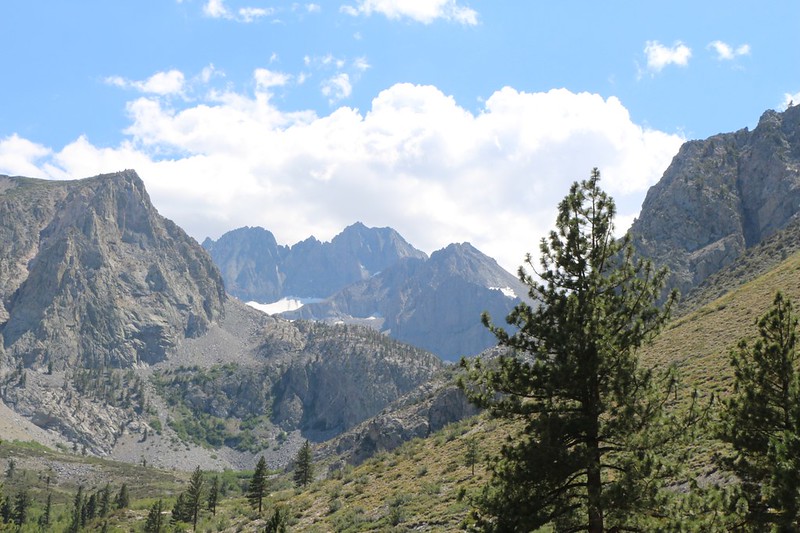 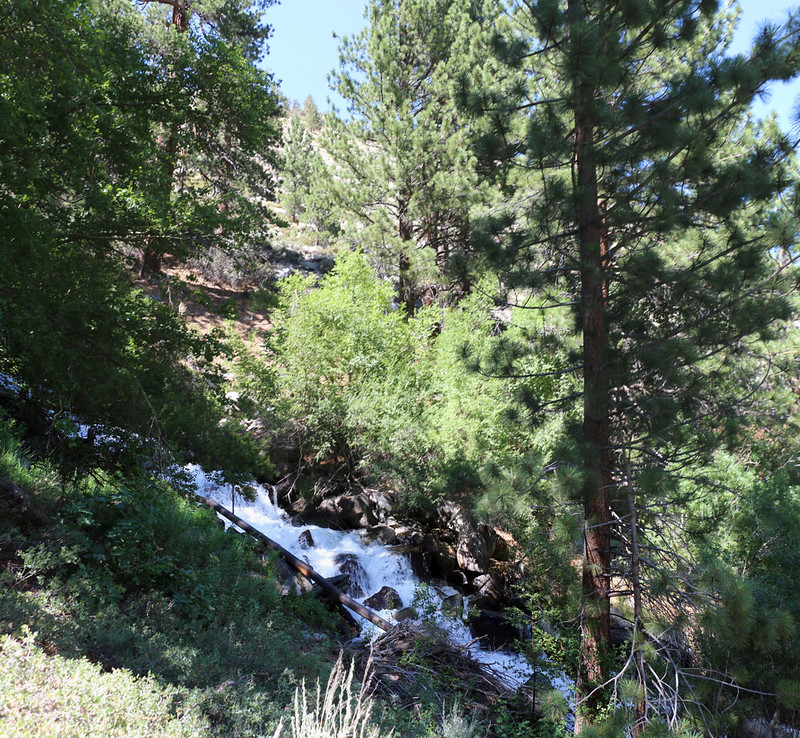 The trail was quite narrow, and it was almost impossible to maintain a six foot distance from the hordes of returning hikers, who didn’t really seem to care about it anyway.  This made Vicki quite mad.  Far too many of them wouldn’t even give us a chance to get off the trail and out of their way.  Totally rude and inconsiderate.  But most people at least tried, and it wasn’t always easy to find a spot off to the side.  It truly was a steep and narrow trail.

After an hour or so of slow, often-interrupted climbing, we arrived at the footbridge at the top of First Falls.  We’d climbed roughly 400 feet from the trailhead, and our wimpy first day’s hike was essentially over.  The dayhikers would no longer be an issue, as the Walk-In Campground was off to the right of the main trail. 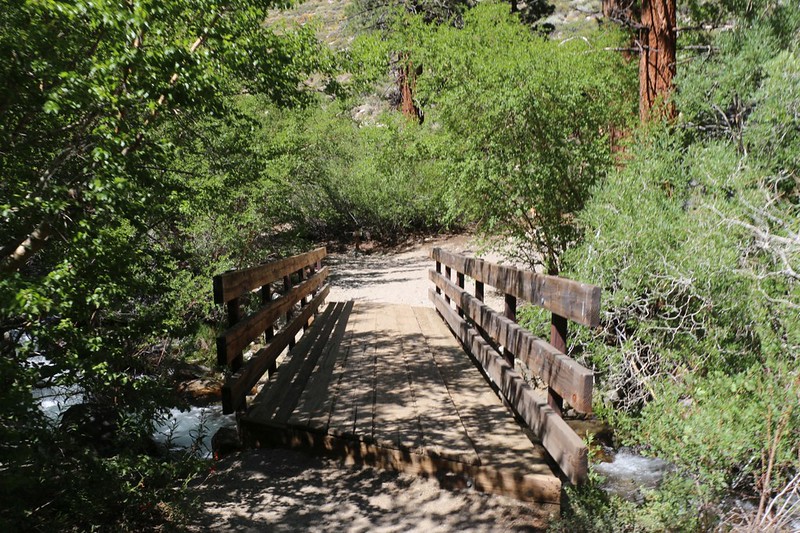 The footbridge above First Falls

We happily headed down into the old, abandoned campground and found a good spot for the tent, right next to a picnic table.  That table was a serious luxury for backpackers like us, and we spread our gear out on top of it.  Then we set up the tent and did the usual camp chores, like filtering drinking water from the creek, and blowing up the air mattresses.  Then we went into the tent and took our usual afternoon naps.  Ah, yes!  This was the lifestyle. 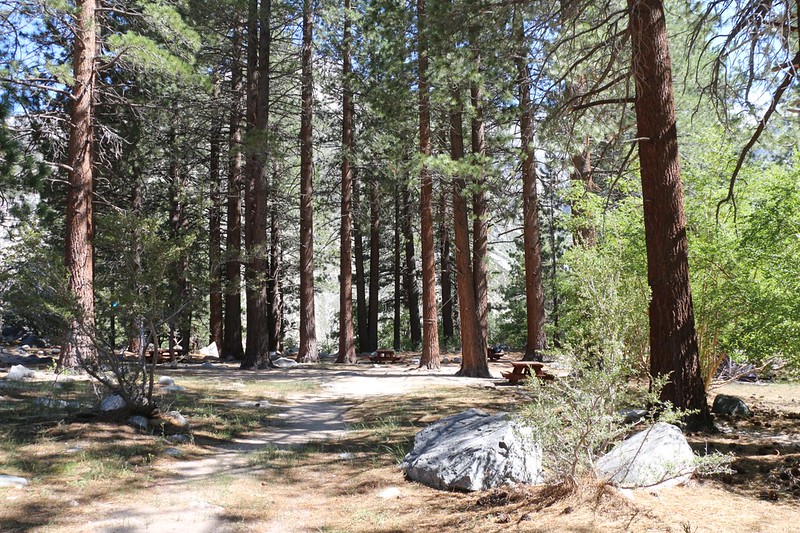 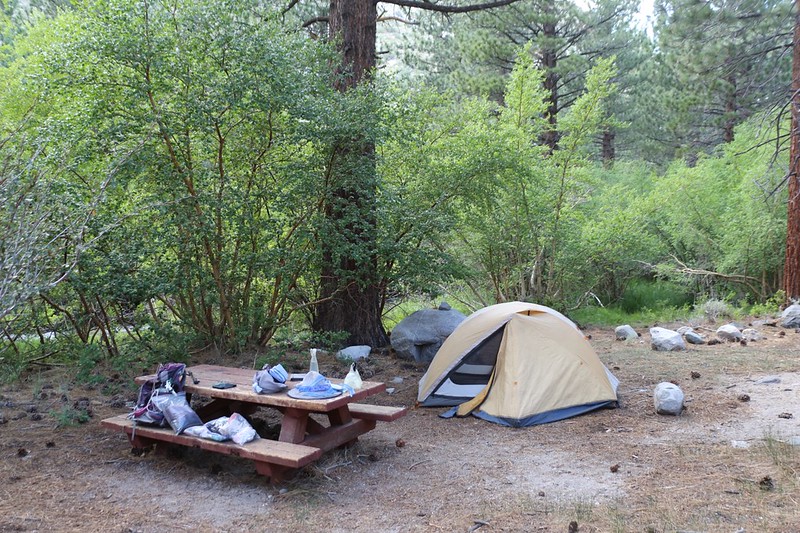 Our tent at the old Walk-In campground near First Falls, with a picnic table. It’s almost like car-camping!

The Walk-In Campground was only at 8,200 feet elevation, not the 10,000 feet we’d slept in the night before, but we hoped that it would be enough for Vicki’s lungs to continue getting acclimated.  She seemed to be feeling well, and her breathing wasn’t terribly labored, so we had high hopes for the next day, when we would be climbing over 1800 feet to First Lake.  At that point we’d be back at 10,000 feet again, and Vicki would get a third night to acclimate before the final push to our base camp at Fourth Lake.  I was feeling confident that we could do this.  And if not, then we’d stop and camp somewhere along the way.  This was to be a very open-ended trek, with only vague destinations that could change at any time.  Just the way we like it.

Eventually, we crawled out of the tent and ate some dinner.  We hung out for a while at the table, but when a few mosquitoes made their appearance we decided to head back into the tent.  We packed up everything we could and got ready for an alpine start the next day.  Our plan was to start hiking well before dawn so the temperature would be more to Vicki’s liking, as the first part of the trail was known to be exposed, with little shade.  Hiking in the dark would solve that problem!  So we read our books for a while, but it had been a long day, and we were sound asleep before sunset.