It was cool that morning at Olancha Pass, but it didn’t stop us from waking up early and getting packed before it got too hot.  Our plan was to hike down over a thousand feet, and for that reason we expected that it might get a bit warmer during the day than usual.  Meanwhile, the weather report that we got from our Garmin InReach indicated that a front might be coming through, and that it might get windy.  We’d have to play it by ear.  We had consulted the map the night before, and our plan for the day was to hike four miles downhill until we crossed the footbridge over the South Fork Kern River, then continue another three miles, up and over a ridge into Beck Meadow, where there was only one place to camp that had reliable water. 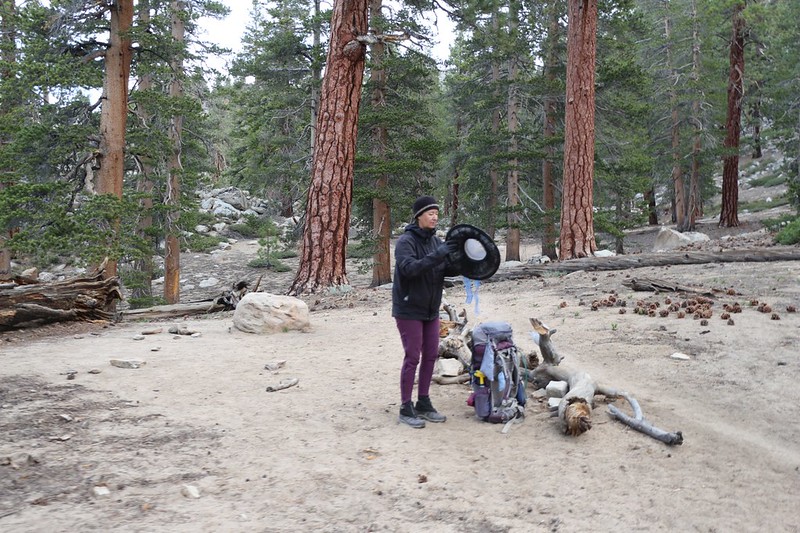 The hike began in a most unusual fashion.  We headed down into Cow Canyon and passed the trail junction to Monache Meadow.  We continued south on the PCT, but stopped just below the intersection in order to fix one of my boots, which had gotten uncomfortable due to a wrinkled sock.  As we waited, we heard some lowing and mooing sounds.  It sounded like cows!  We looked around but didn’t see anything, at first.  And then they came into view:  An entire herd of cattle was walking down the PCT!  There didn’t seem to be any human cowboys around to run herd on them, either.  They were just moseying along.  We moved off the trail to give them room, but it turned out not to be necessary, as they took the Monache Meadow Trail instead.  They knew exactly where they were going.  I checked the map, and I believe that they came from Summit Meadow, which appears on the map as a lake, but is actually a grassy meadow most of the year.  We observed them going by, and waited a bit, and then another string of cattle walked by.  It was actually a lot of fun to watch, and we were glad that they didn’t pass us on the trail.  Stepping in fresh cow manure didn’t sound like fun.  Nor did smelling it.  And now we knew why they called this Cow Canyon! 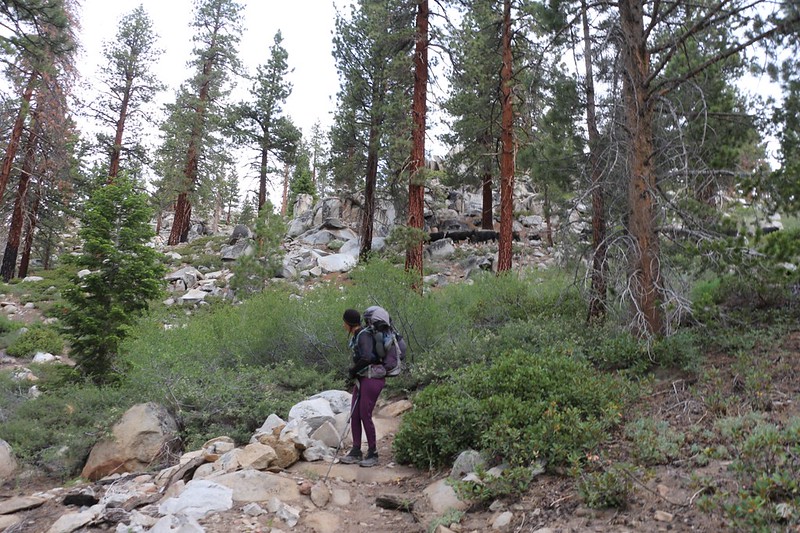 Video of Cattle hiking on the PCT near Olancha Pass 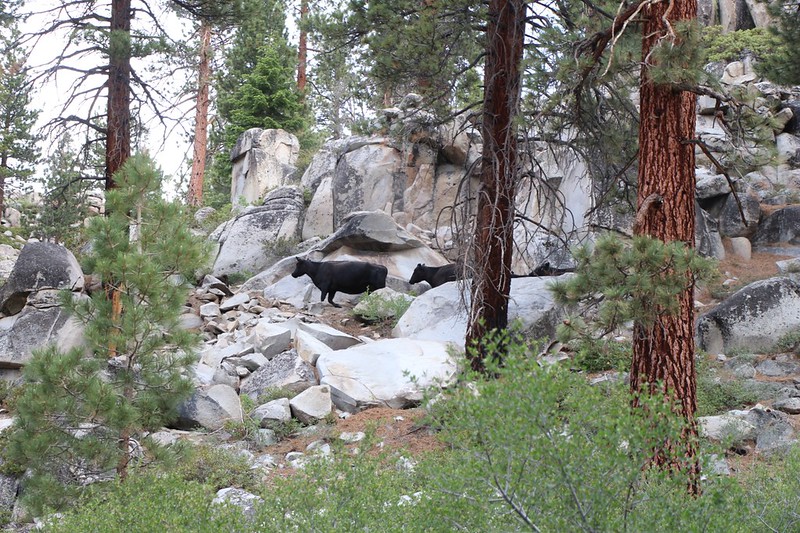 Herd of cows passing by, on their way from Summit Meadow to Monache Meadow

After that, it easy hiking, heading downhill through a lovely forested canyon.  Cow Creek was flowing slowly but well, and there was little undergrowth.  Very pleasant.  We saw a couple of good campsites along the way that weren’t shown in the Guthook app, which was unusual, but we didn’t stop long to investigate.  The two miles of canyon flew by rather rapidly. 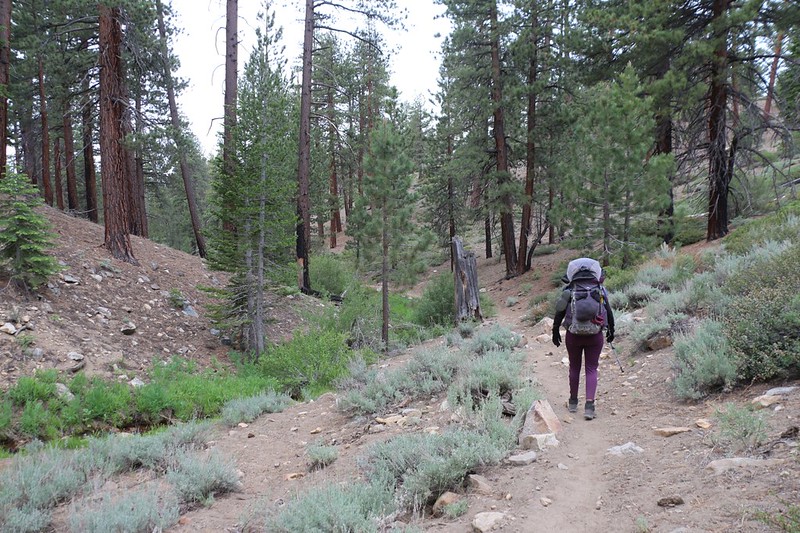 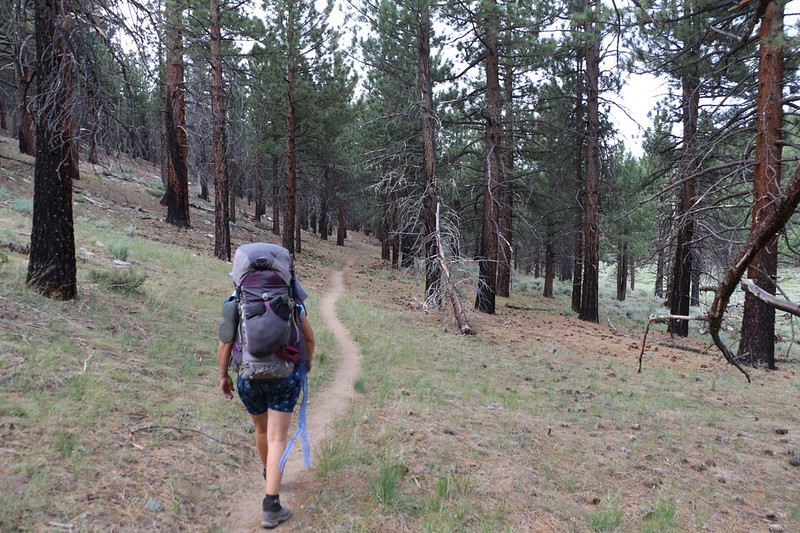 Panorama video of Cow Canyon where it merges into Monache Meadow

Panorama shot of Monache Meadow where it enters Cow Canyon, with Deer Mountain on the far left

Soon we arrived at Monache Meadow, which was truly huge.  It’s main feature is the South Fork Kern River, which travels down the center of the meadow.  There were hardly any trees out there for shade, but luckily there were plenty of clouds, so we didn’t roast.  True to the prediction, the breeze was picking up, and this also kept us cool.  We followed the trail up above the river bed for quite a distance, and we could see that the water level was relatively low, especially for June.  2020 had been a low-snow year, so we weren’t surprised at all. 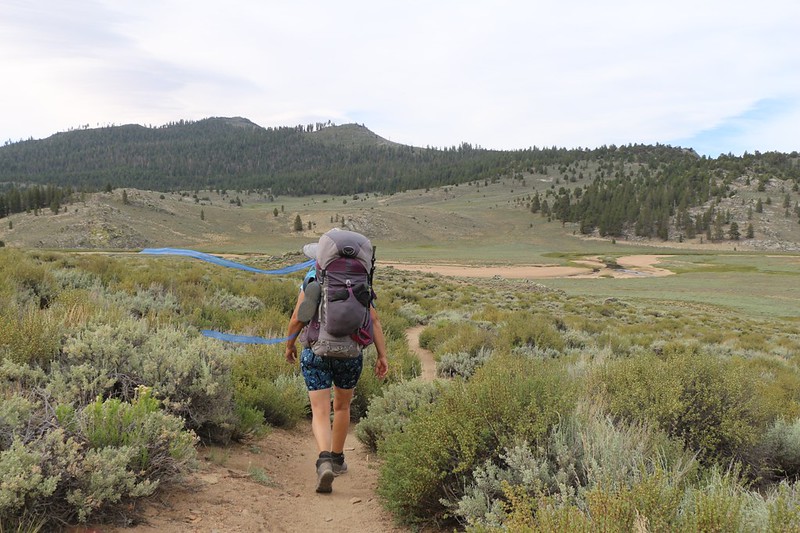 The South Fork Kern River meanders in the bottom of Monache Meadow, with Deer Mountain on the left 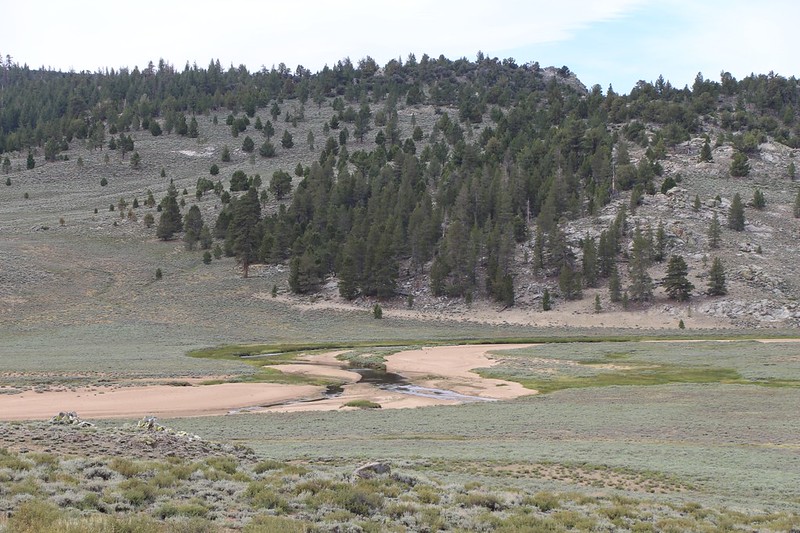 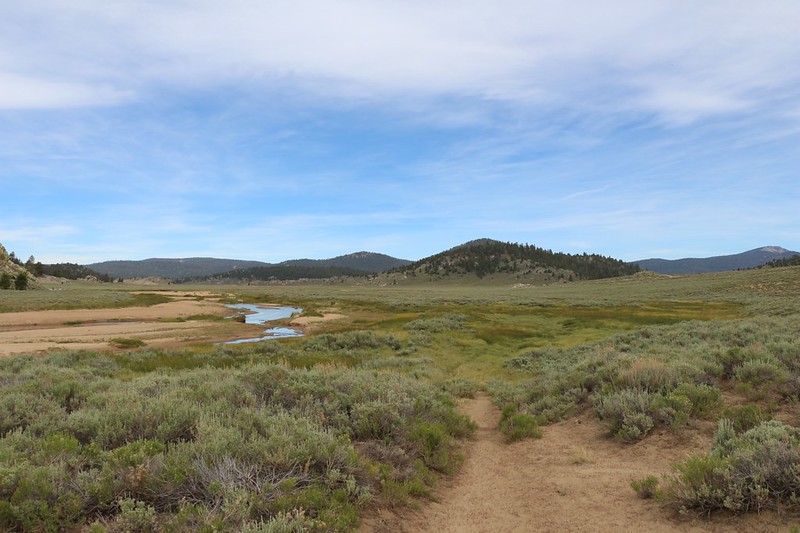 Looking north over Monache Meadow with the South Fork Kern River on the left. This meadow is gigantic.

At PCT mile 716 we came upon the footbridge over the river.  It was a beautifully designed steel arch.  The river could’ve been crossed by wading that day, but we could see that in the Springtime it would be impossible and deadly to make the attempt.  We hiked over on the bridge, of course, and took a boot-off break on the south side.  Vicki also dipped her feet in the water, just to get some extra cooling. 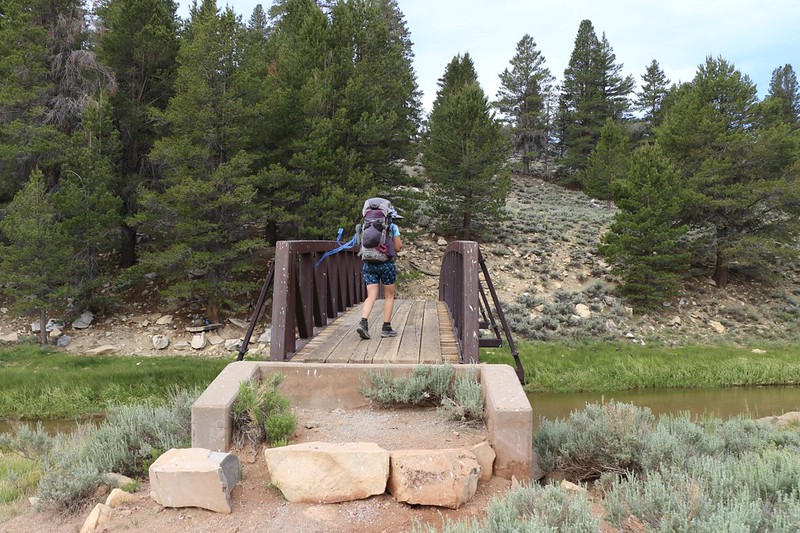 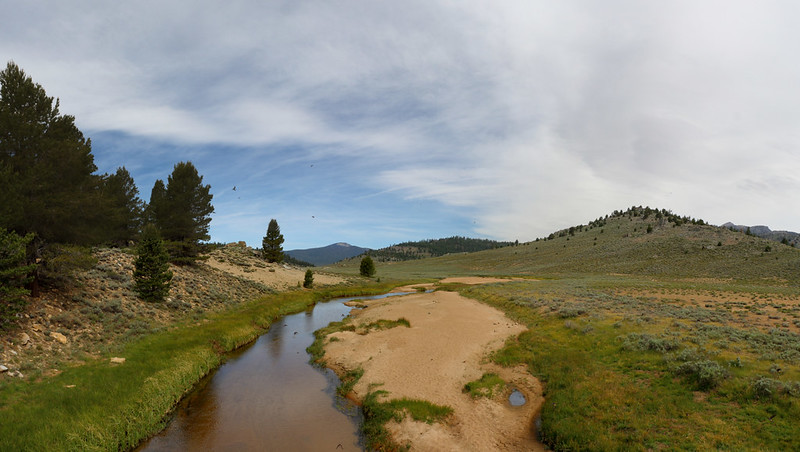 We also had a lot of fun at the bridge.  Underneath, sheltered from the weather by the wooden planks of the bridge, were hundreds of Swallow nests, and the swallows were flying all around the bridge.  The steady, rising breeze made this a spectacular sight, as the birds attempted to gain their nests while flying upwind against the airflow.  They reminded us of salmon swimming upstream in a fast river.  We stayed at the bridge longer than we should have, but this was a display of nature that was rare and compelling.  We were mesmerized. 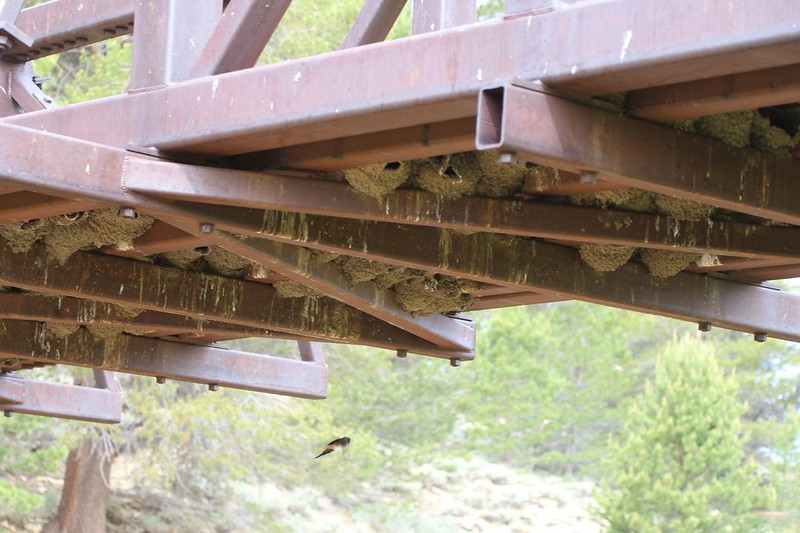 There were hundreds of swallow nests under the bridge

Video of Swallows flying into the breeze under the metal bridge 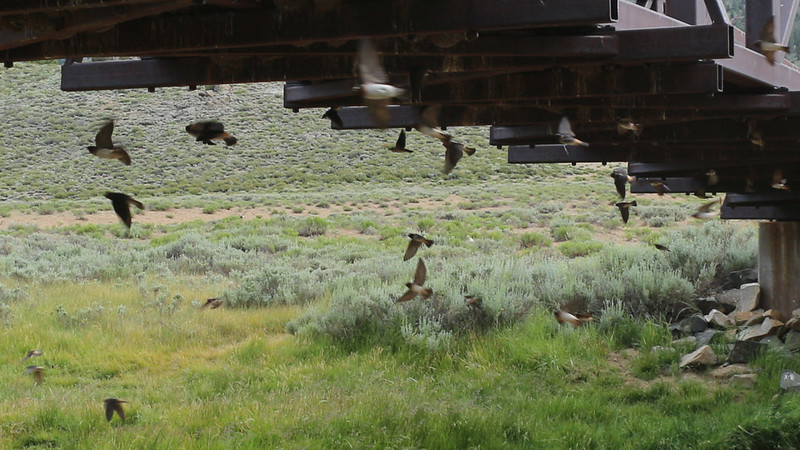 After that, it was time to commit to the uphill section of the day’s hike.  We had to climb about 500 feet in a mile and a half, which wasn’t steep, but it wasn’t the cool early morning, either.  We were glad for the clouds and the breeze, as the first part of the climb was exposed.  It gave us great views, but the air was quite warm.  Vicki had to resort to her spray hose to stay cool.

Another panorama shot looking north, with the South Fork Kern River and Olancha Peak in the distance

The wind eventually blew the morning clouds away, and we hiked onward through the forest, taking advantage of the shade of the trees whenever possible.  It was slow going, as Vicki was overheating a bit, but we had plenty of time.  Along the way up the ridge, we were treated to great views to the north.  We saw Mount Whitney and Mount Langley in the far distance, the latter of which marked where we started back at Horseshoe Meadows, five days ago. 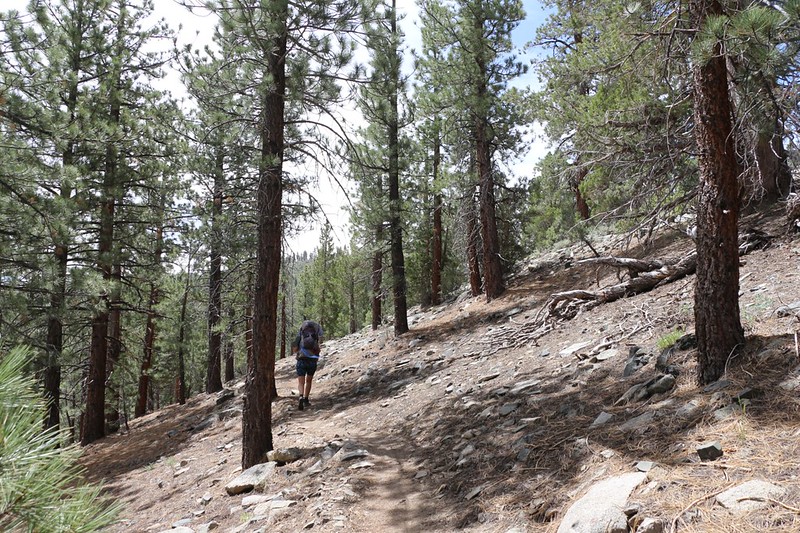 The sun came out but at least there were trees for shade, and a nice breeze as we climbed over the ridge 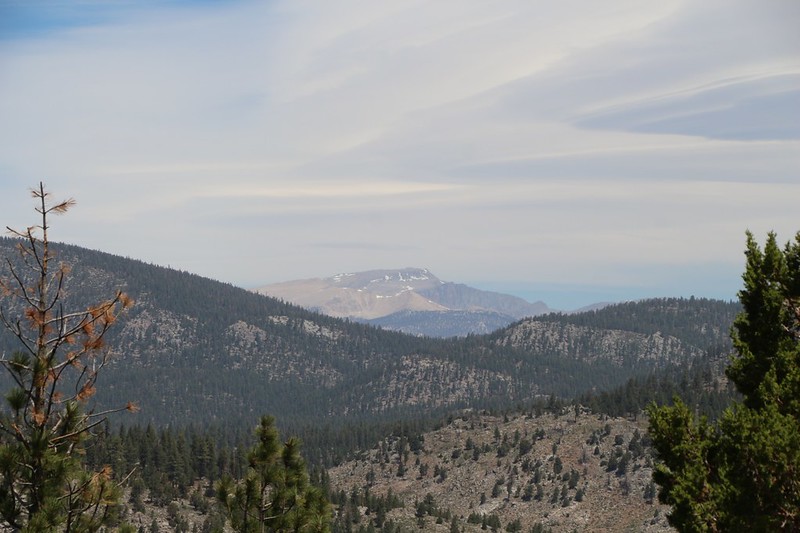 We topped the ridge and came upon new views.  Beck Meadow lay below us to the south.  We saw some buildings across the valley, and realized that these must be private inholdings within the National Forest and Wilderness.  And now we knew where some of those cows we saw originated.  This was some beautiful country, and it wasn’t surprising that it was settled early-on in California history.  Perfect land for Summer grazing, but I wasn’t sure that I’d want to spend the Winter up here.  We were happy that the climbing was over, and, since it was noon, we decided to find a good spot with a view to eat lunch.  The sun was shining and the breeze was blowing, and we had a well-deserved rest. 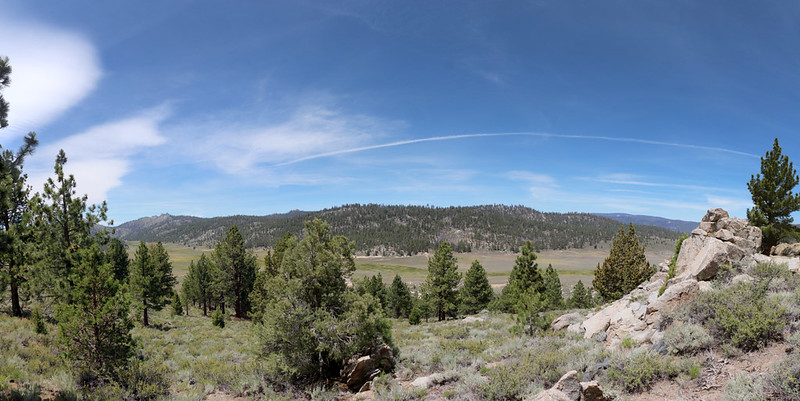 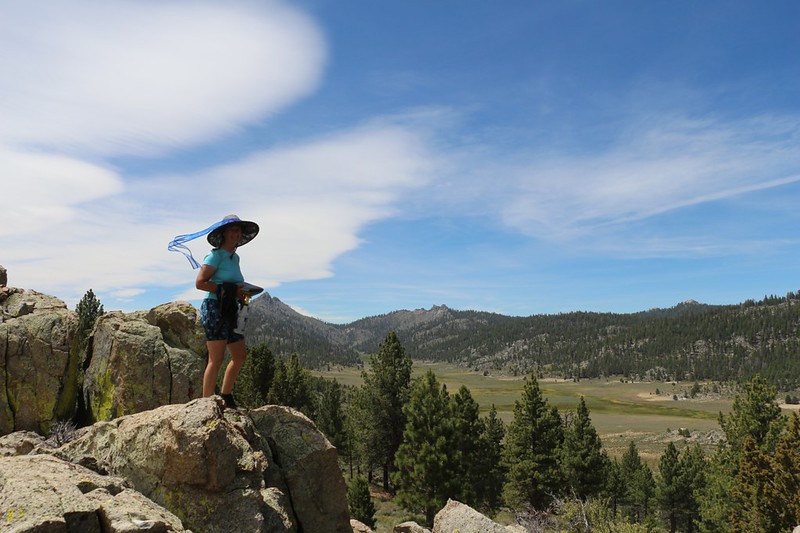 Panorama video from the trail above Beck Meadow.  It sure was windy!

Panorama view of Beck Meadow from the PCT at mile 714

After that, we only had a mile of easy downhill hiking in order to reach our prospective campsite.  And it was accomplished in short order.  We headed up into the little valley where a small creek was flowing, and discovered a well-made campsite up above the water.  It had a fireplace and a perfectly flat stone table for Vicki to cook dinner on.  We were both delighted.  There was plenty of shade for our afternoon nap in the tent, and all of the trees cut down the breeze significantly.  Great camping spot. 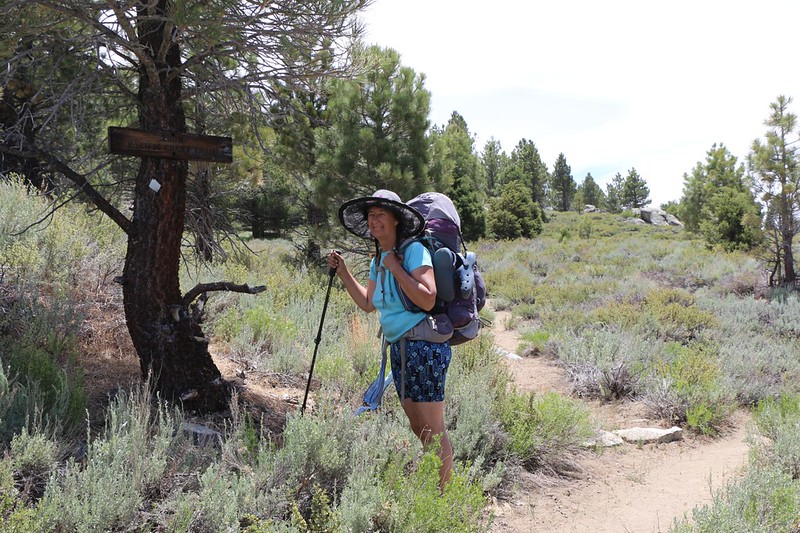 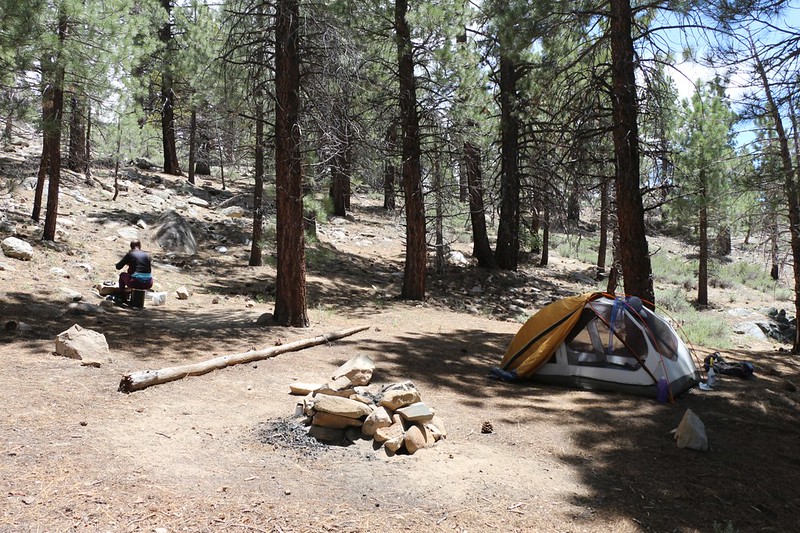 Our campsite at PCT mile 713 was quite nice, and had plenty of shade under the pines, and less wind

After setting up the tent and arranging the gear, we headed upstream to a likely spot with a small waterfall that made it easy to collect some water.  We hoped that we were far enough upstream to avoid any contamination by cattle (who are well known for polluting streams with their “cow pies”), but we still weren’t confident enough to use the Aquamira drops, and so we filtered two gallons the old fashioned way. 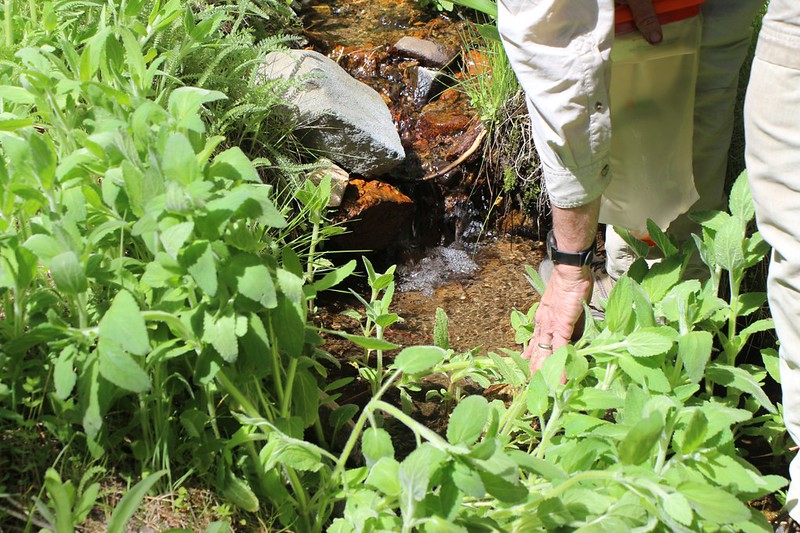 We took a comfortable nap in the tent for an hour or so, and then I read my book for another hour.  It was a very peaceful day.  We decided to eat dinner a bit earlier than usual, as we were getting bored.  Then we headed out to eat it on a nice spot with some exposed rocks and a view of Beck Meadow.  This was our last night of the trek, and we took plenty of time to enjoy the view.

We ate our dinner with a pleasant view of Beck Meadow

We headed into the tent fairly early, as the first part of the final day’s hike was uphill.  We checked the map, and we had about nine miles to hike to make it back to the car in Kennedy Meadows.  We would be descending another 2000 feet, with the final section following the South Fork Kern River.  So, it would be an easy hiking day, but we figured that it would be at least ten degrees hotter than today by the time we finished (at that lower elevation), and so we set our alarm for 4am once more.  One final Alpine Start, and this forty mile section of the PCT would be in the bag.  And, once again, we fell asleep before the sun had set.