This day was the crux of the trek, a long hiking day with plenty of climbing, and we woke up well before dawn to make sure that everything went as planned, as we climbed up the side of Olancha Peak, the tallest mountain in the Southern Sierra Nevada.  Once we reached the top, we would be leaving the Golden Trout Wilderness and entering the South Sierra Wilderness.  The hike would also be mostly downhill from that point, all the way to our destination in Kennedy Meadows.  And we were psyched to get the climbing over with as soon as possible, in the cool of the morning so that Vicki could hike under optimal conditions. 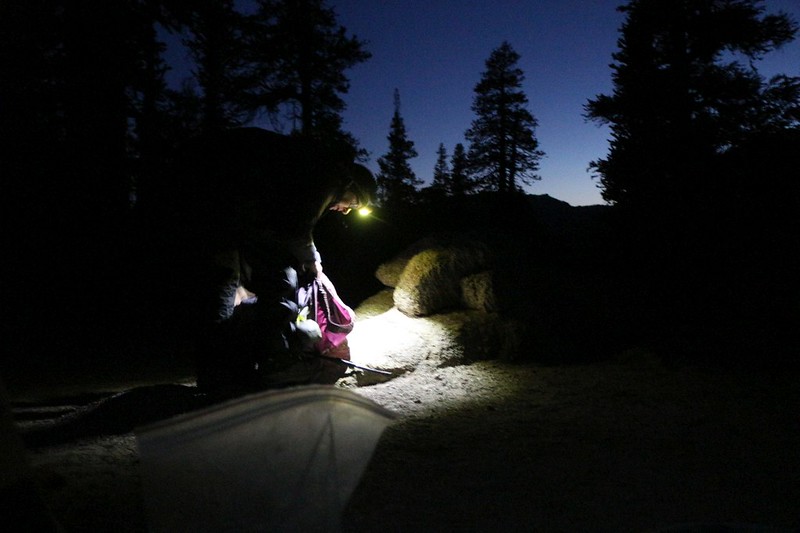 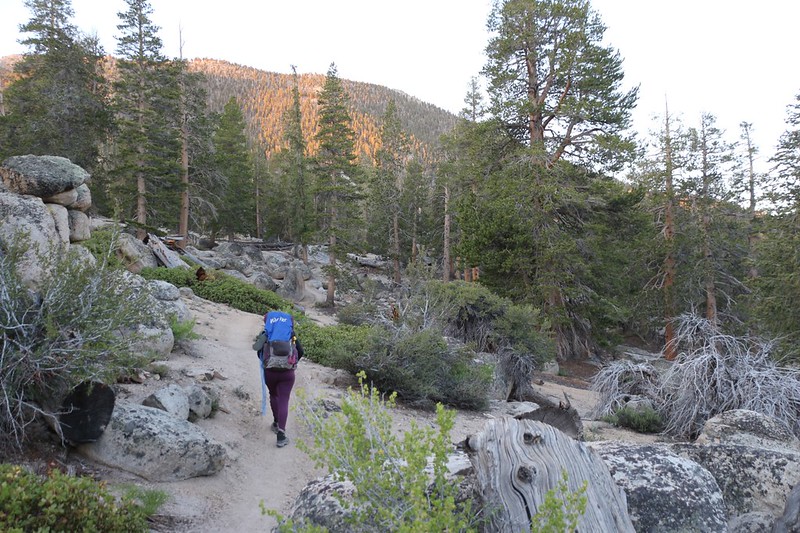 We were already hiking before 6am, set to climb 4 miles and 1600 feet while keeping as cool as possible – it worked!

The trail was on the shady, western side of Olancha Peak, so we stayed cool, but, unfortunately, it also paralleled Long Stringer, which was a narrow, meadow-filled valley rich with mosquitoes.  We got out the 100% DEET and sprayed our vulnerable areas, which prevented them from landing and biting, but it certainly didn’t stop them from following us.  And we didn’t dare stop hiking for long, as the bugs found us almost immediately.  In truth, we collected a growing cloud of mosquitoes, one by one, as we hiked along the trail.  They deftly slipstreamed into the calm air behind our big packs as we hiked along as fast as we could, trying in vain to outrun them.  And we weren’t very fast, thanks to the slope.  When we’d pause for a breather, the cloud would finally have their chance, and would swarm around to the front, where they would buzz around our faces and be totally annoying. 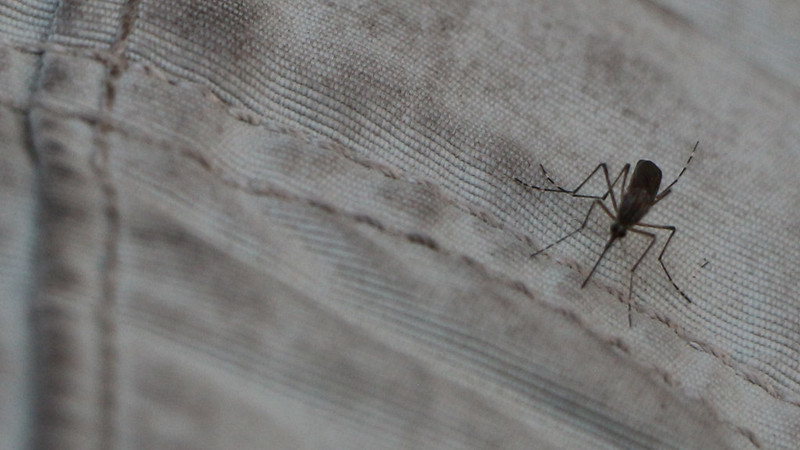 Eventually, we either left the bugs behind, or the air grew too warm for them.  We were happy either way.  So we continued trudging onward.  At the two-hour mark, Vicki’s energy was spent, and we stopped for a short nap and some snack.  This did the trick, and after that Vicki was as perky as usual.  We began getting better views to the west as our elevation increased.  Vicki had called Olancha Peak “boring” when she saw it from a distance, earlier in the trip, and her opinion of it hadn’t changed a bit.  Even the sight of Mount Whitney in the distance to the north wasn’t enough to change her mind!  I pointed out the Kaweah Range, where we would be hiking on the High Sierra Trail, two months from now, but she remained adamantly bored.   Some people can be stubborn.  But not me.  I thought this peak was fine, and was giving us the best views we’d had all week. 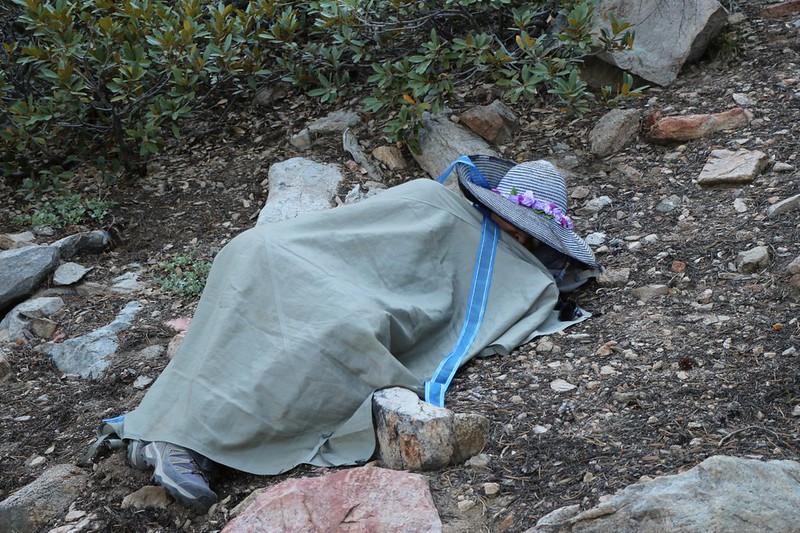 After more than two miles and two hours of climbing, it was time for Vicki’s first nap of the day 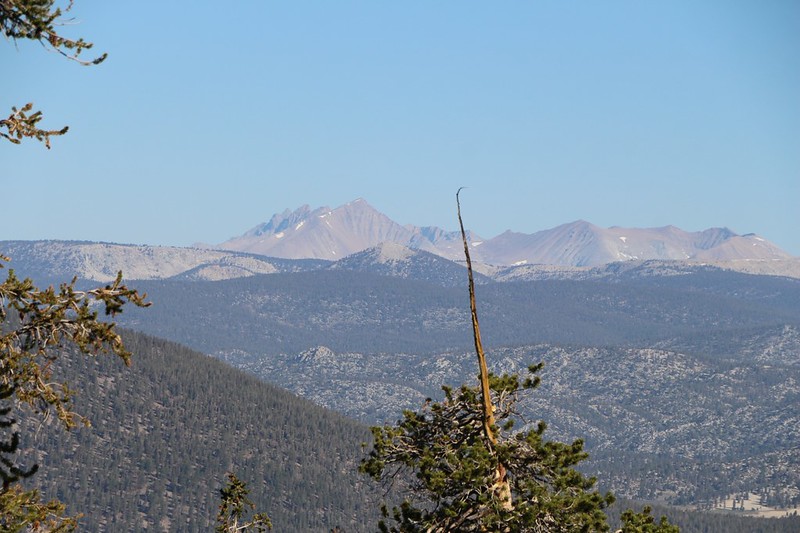 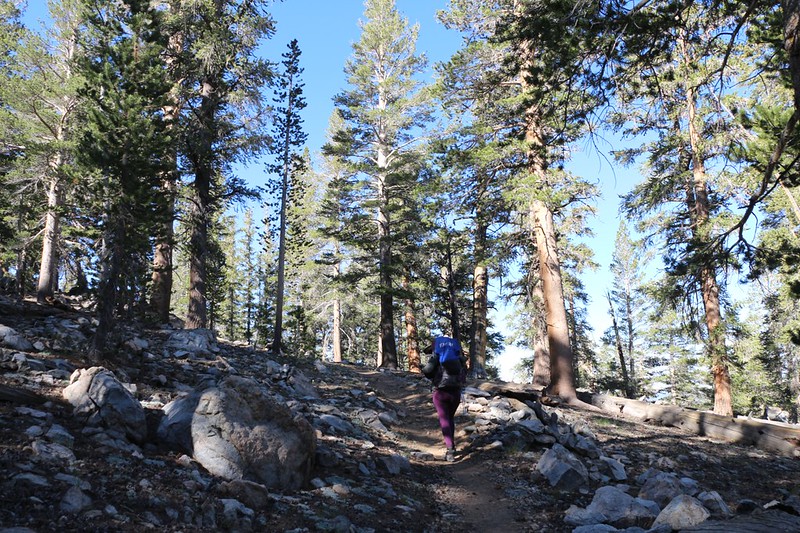 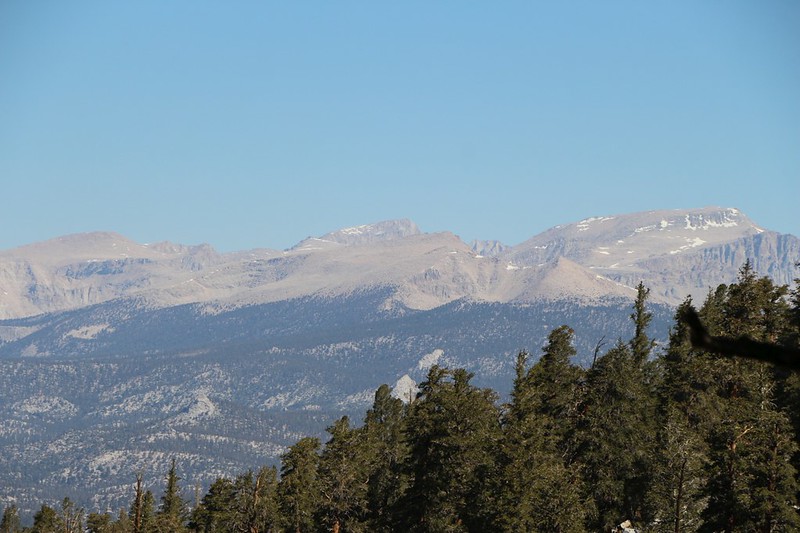 Four miles with 1600 feet of elevation gain isn’t exactly a steep trail, but it took us quite a while to hike it.  We reached our trek’s highest point, where the PCT crossed the western ridge of Olancha Peak, and immediately took off our packs in a really nice campsite near the trail.  It was time for a major break:  Boots off, a long nap, a book to read, and a celebratory bowl of steaming ramen noodles for Vicki.  And she deserved it.

While we were eating, a young couple arrived.  They were trail runners, and had come all the way up from Owens Valley in the east.  We spoke for a while as they took a short break, and then they headed up along the ridge to the summit.  I asked Vicki if she wanted to follow them and bag a peak this trip, but all I got was an emphatic NO.  There was no way she was going to climb a boring peak like this.  Or so she said.  Let’s be honest:  I knew beforehand that she wouldn’t do it, but I had to try.  I’d have to be content with her surviving the next four miles of hiking, which, thankfully, were all downhill.  So we packed up our stuff and headed onward. 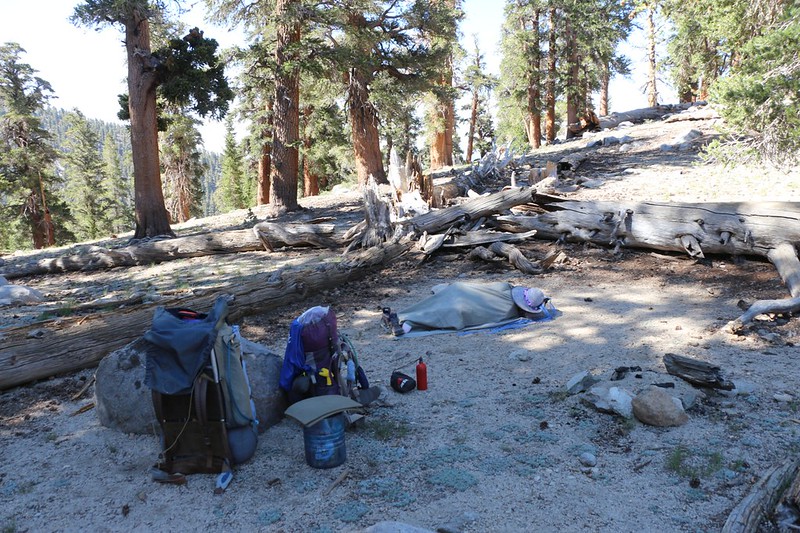 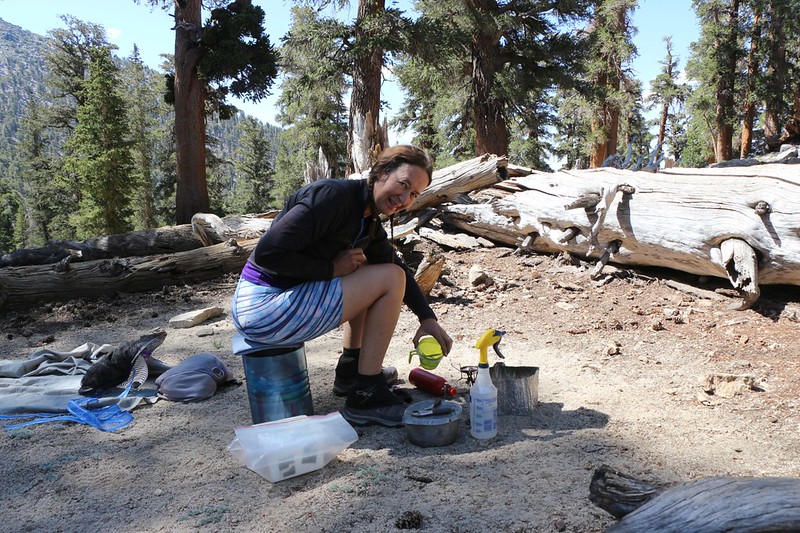 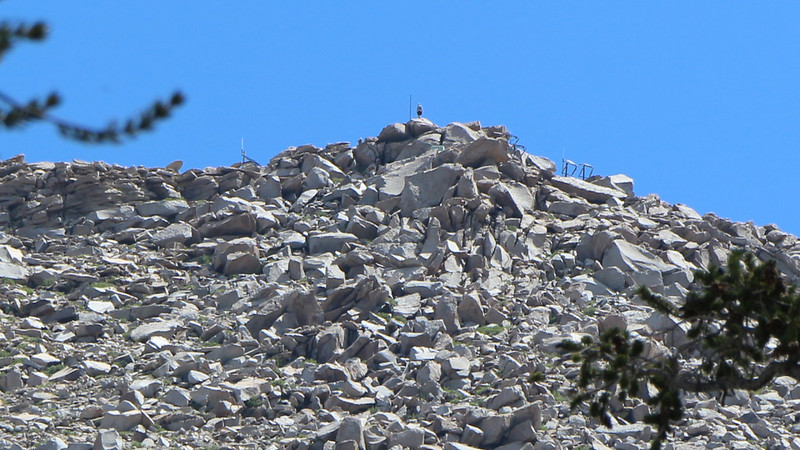 Now all we had to do was descend another four miles and 1500 feet to Olancha Pass – should be easy!

As we were hiking along, enjoying the downhill slope, the most amazing thing happened!  We came upon Brush Meadow.  It was a large, sloping expanse of grass, brush, and flowers, with a gentle breeze and great views, surrounded by dark green conifers.  Vicki fell in love with it, and we took an extra break just to sit and enjoy the beauty.  But that wasn’t the amazing thing.  What was amazing was that Vicki admitted that maybe, just maybe, Olancha Peak wasn’t that boring after all!  Hallelujah! 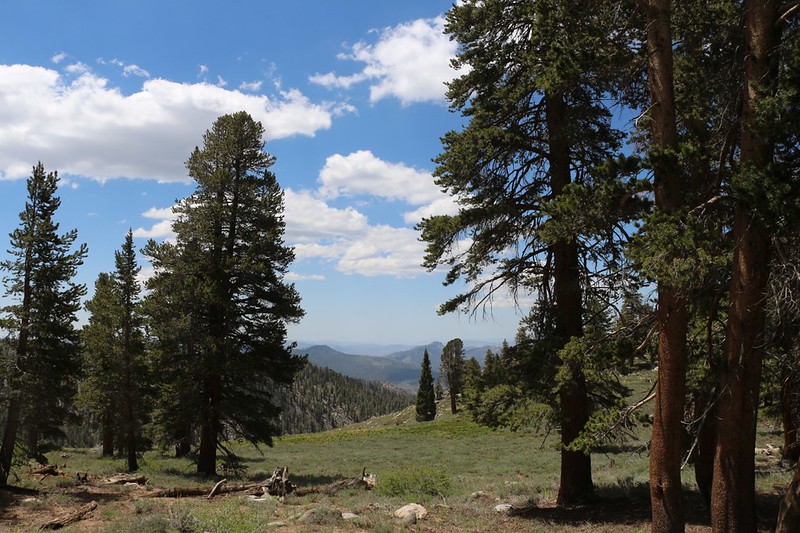 Our first sight of Brush Meadow 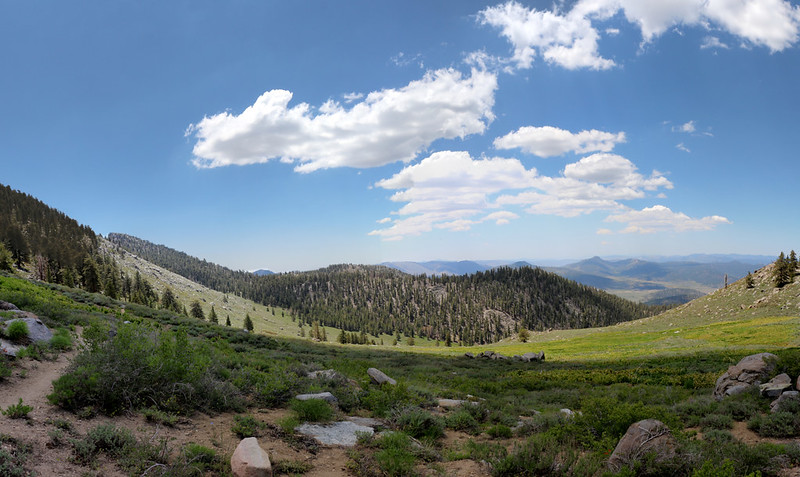 Panorama view over Brush Meadow and the headwaters of Monache Creek, on the southwest slope of Olancha Peak

We took a boot-off break in the shade on the far side of Brush Meadow, and then headed downhill once more.  We passed the now-nonexistent trail leading to Beartrap Meadow, and continued on the PCT down what would eventually be called Cow Canyon, following along the headwaters of Cow Creek.  It was hot out there in the noonday sun, and we were thankful when an occasional cumulus cloud donated a bit of shade to our cause.  There was a campsite at PCT mile 722 that was an “alternate” on our itinerary.  We stopped and checked it out, as it had a nice view and a flowing creek nearby.  It also was situated directly in the sun, and it was still early afternoon.  I asked Vicki how she felt.  Could she make it two more miles to the Olancha Pass Trail junction?  Well, those earlier naps and the ramen noodles must’ve done the trick, because she was more than willing to continue on. 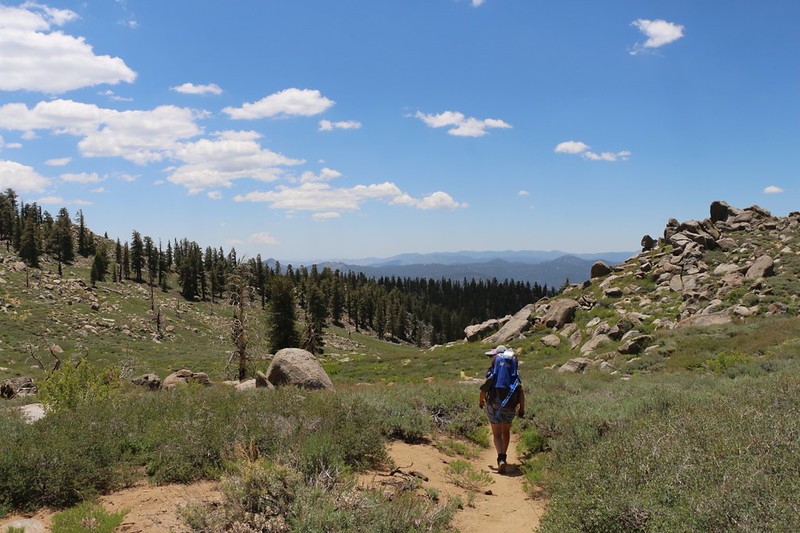 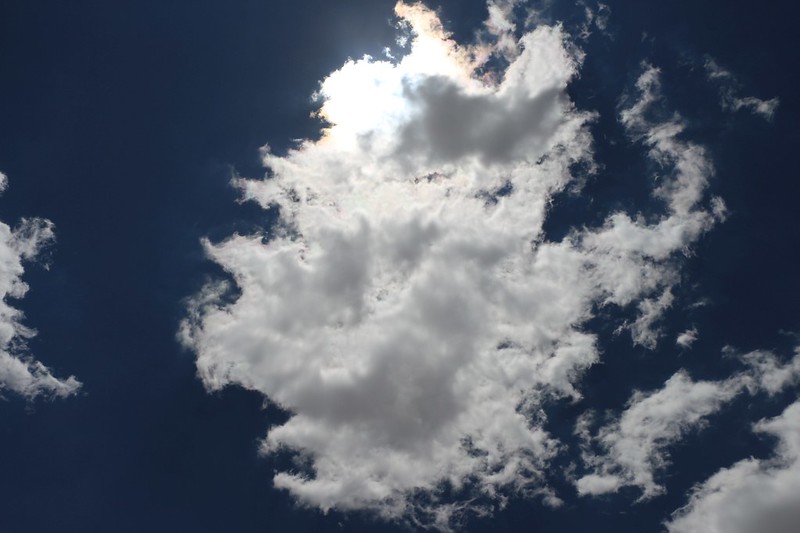 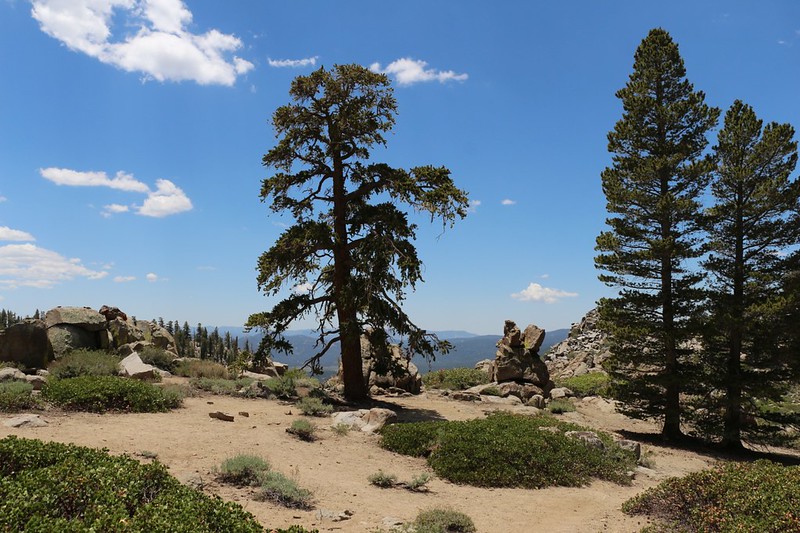 The next two miles proved to be quite pleasant.  It was fun, easy hiking on a well-made trail with just the right amount of downhill slope.  And we knew that we had plenty of time to reach the pass.  We were in no rush.  We stopped for yet another boot-off break under a tree, and simply enjoyed the peaceful wilderness.  For after all, that’s really the main reason for coming out here. 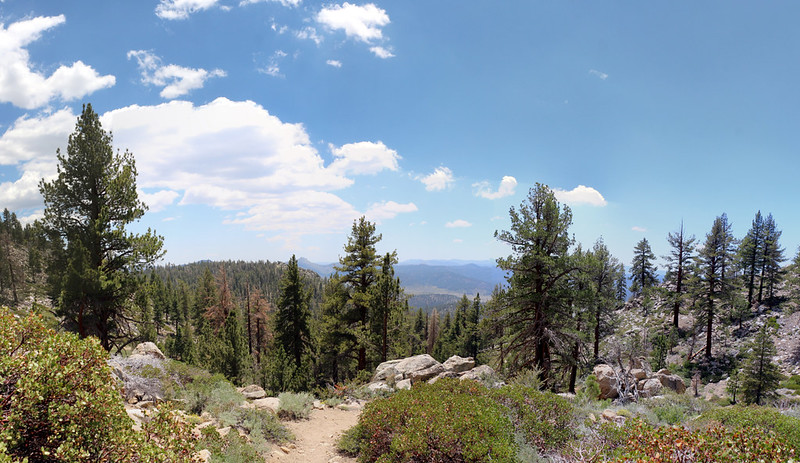 Hiking downhill on the Pacific Crest Trail on a pretty Summer day in the Southern Sierra – this is the life! 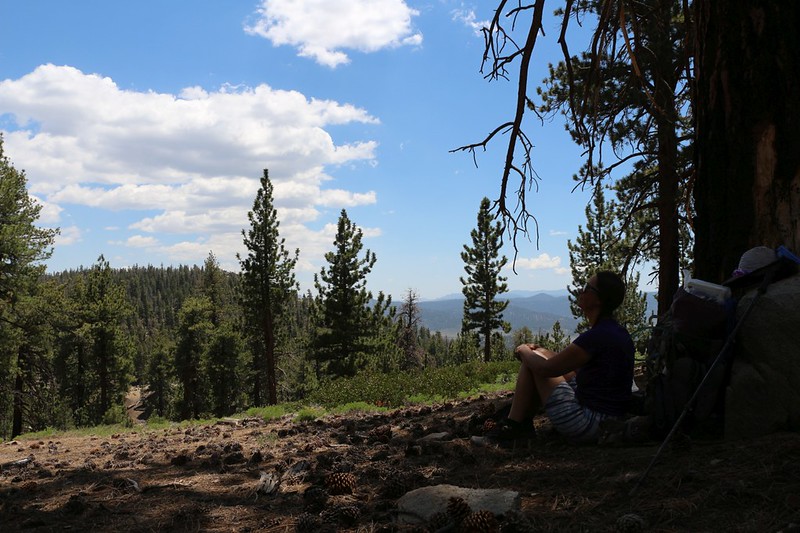 We made it to the Olancha Pass Trail junction, and put down our packs in the shade.  The Guthook app swore that there were campsites here.  And there were, but most of them were either in the direct sun, on a horrible slope, or were right next to the trail.  Vicki took a break while I wandered all over the area, discovering all of the poor choices.  We generally prefer a flat spot with shade, privacy, and a view, and we weren’t going to get any of those here.  The best spot I found was too close to the trail, and there were a couple of big anthills nearby.  But at least it had shade and wasn’t too sloped.  It would have to do. 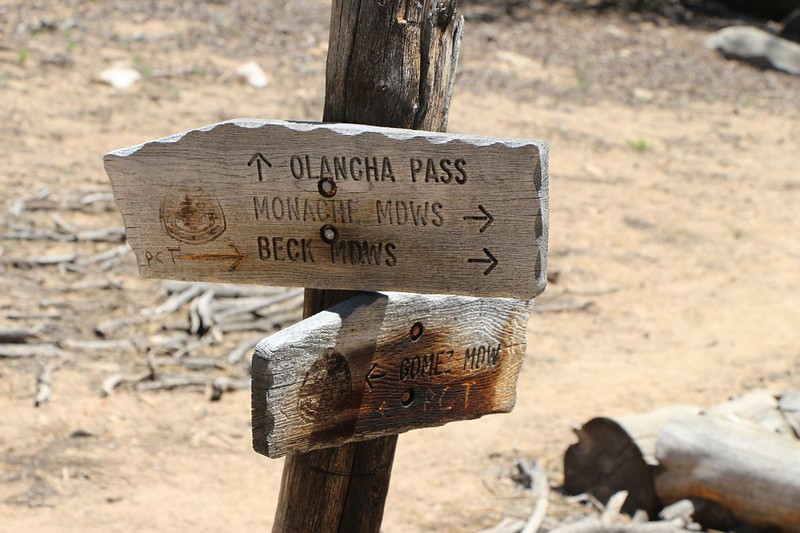 So we set up the tent and inflated the mattresses.  We left the tarp off the top and simply lay down in the tent.  The air was warm, in the mid-seventies, and it felt wonderful to stay inside the screened-in tent.  No bugs, no worries.  I read my book for a while, and Vicki took a long nap.  Then my eyes got tired and I, too, took a nap alongside her.  We deserved it after getting up at 4am!  The advantage of packing up early in the morning is that you end up getting into camp early, so you get the best choice of camping spots.  And an afternoon nap!  It’s Sierra Heaven. 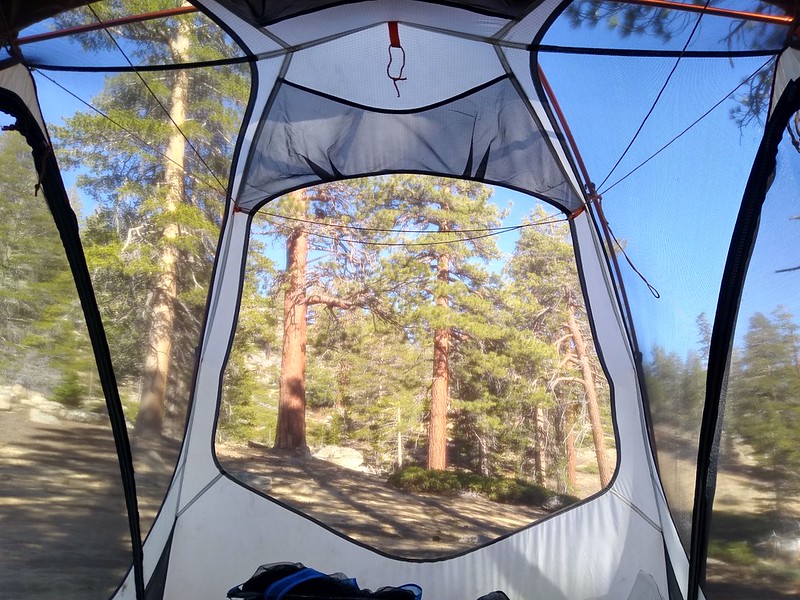 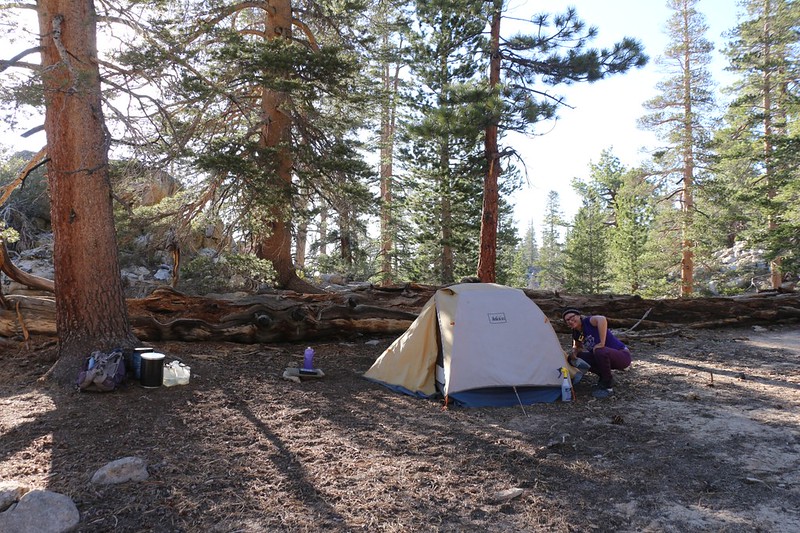 We woke up within an hour and headed back up the trail to Cow Creek, where we filtered the water this time rather than using the drops.  Then we came back to camp and ate some freeze-dried dinner.  A few people hiked past us on the trail, but nobody stopped to camp nearby, which was fine by us.  The 2020 Covid year on the PCT was turning out to be really different from usual.  So few hikers.  In many ways it was better, but it took some of the fun out of it, as well.

After that, we went to bed when the sun went down, but we didn’t bother to set an alarm.  Tomorrow was supposed to be a fairly easy day, and we were looking forward to more downhill hiking.