It was easy to wake up after a good night’s sleep in the wilderness, and we didn’t waste any time.  We ate breakfast and packed up just after first light, because today was scheduled to be mostly uphill (but at a very gradual slope).  We tend to get moving early, before it gets too hot, and that day was no exception.  We had a bit over six miles to hike, and about 700 feet to climb.  Not too strenuous, even for us, and we were wimps. 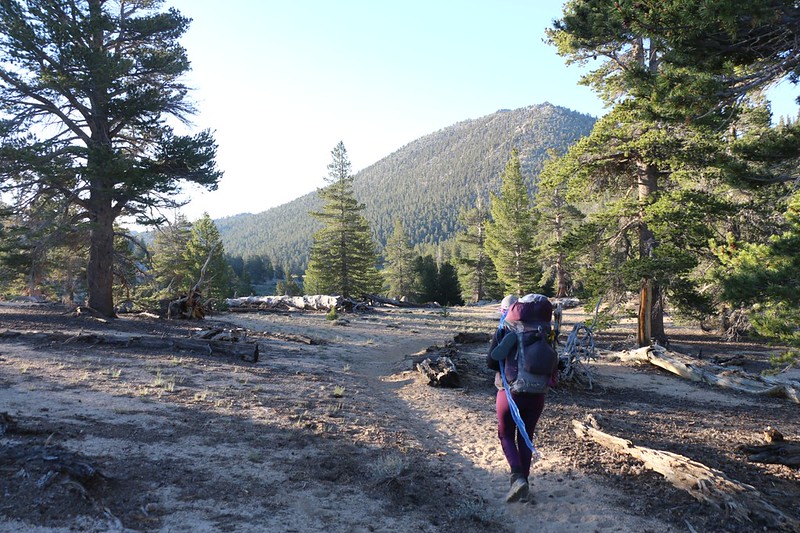 We woke at first light and got hiking early, while it was still cool, as we had a bit of climbing to do that day

The southbound PCT veered west, looping around the perimeter of the Ash Creek Basin, roughly following the Sierra Crest.  Sometimes we were hiking in Inyo County, and sometimes in Tulare County.  This part of the crest was relatively flat, unlike the spiny granite mountains further north, and it was easy hiking through a pine forest with little undergrowth. 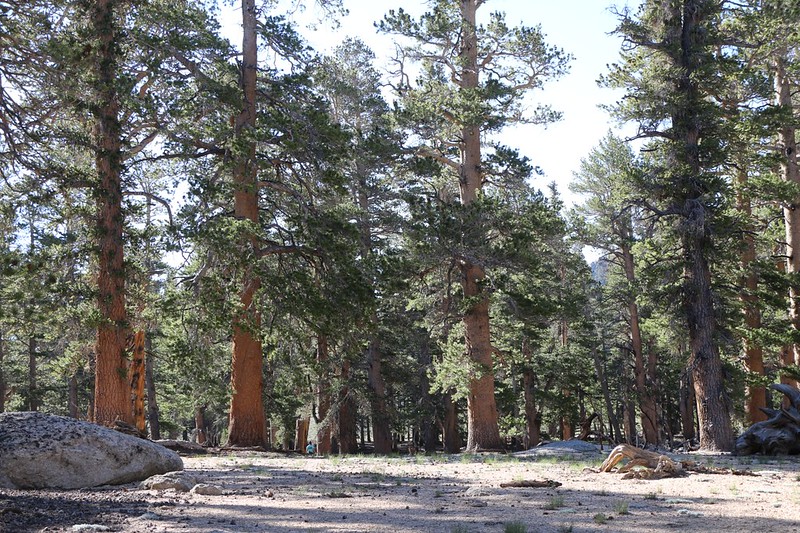 After the first burst of climbing, we stopped for a breather and took off our shoes for a few minutes to cool our feet.  Then Vicki decided to head for the upper end of Ash Meadow, which we could see through the trees.  I stayed and read my book.  After a while, I realized that a bit too much time had passed, and where was Vicki?  Just at that moment a PCT hiker came by, so I asked if he’d seen her, which he hadn’t.  He told me that his trail name was “Lost and Found” and I have to admit that I wasn’t thrilled to hear the word “lost” at that moment.  Vicki didn’t have a GPS with her, and the ground was rather flat and featureless in this area.  Still, she was usually quite good at remembering landmarks and rarely had trouble returning over her own path, so maybe it was OK.  Suddenly, I heard her voice, whooping in the distance.  I whooped back.  That was when “Lost and Found” continued on down the trail, leaving me with a lost buddy.  He must’ve been used to this sort of thing, and seemed untroubled.  I called out some more, but I didn’t hear her again.  I yelled and yelled her name.  Nothing.  I began to get seriously worried after a few more minutes passed.  Finally, after what seemed an endless amount of time, I heard her voice again, and I called some more.  I also got up and walked in that general direction, and soon enough she saw me.  She said that she’d been whooping the entire time, and had heard me calling from several different directions!  As this was impossible (I hadn’t moved) we were forced to conclude that that hapless hiker “Lost and Found” had been calling out to her as he hiked along the trail!  Hoo boy!  He hadn’t helped matters at all!  Luckily for us, she found her way back within earshot of me.  Yes, it was a scary episode, and we were both quite flustered by it, but at least we were together again.  So remember this:  When you’re using the Buddy System, stick with your buddy!

After all that excitement, the next mile or so was positively benign.  We had some fine views south to Olancha Peak, and west toward Kern Peak.  It was truly a beautiful day in the Sierra Nevada.  And I had my buddy with me!  Life doesn’t get much better than that. 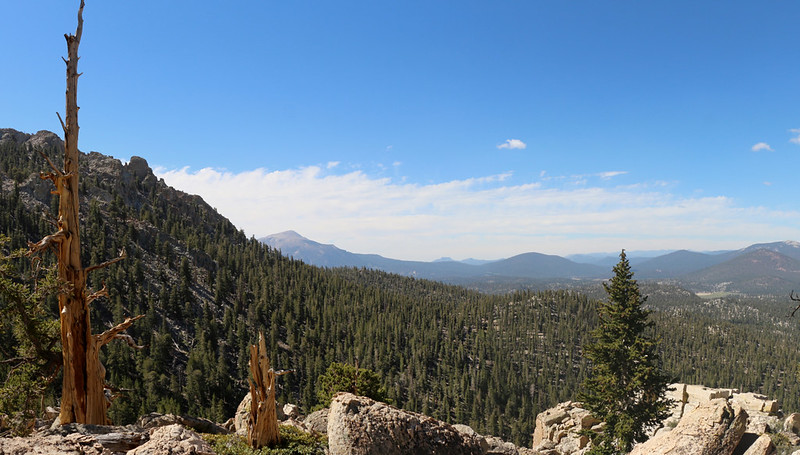 Panorama video as we hiked uphill, west of Ash Meadow and Muah Mountain 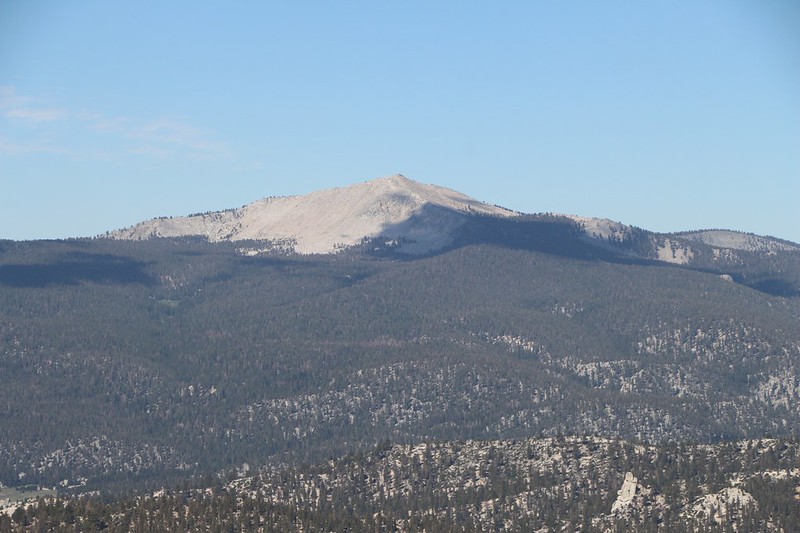 A mile or so further, we came upon an old wooden sign on a tree saying “Public Corral” and we had to wonder about it.  It was obviously about horses, but wasn’t this public land?  Strange.  We decided to investigate, and headed down the side trail toward the old corral, which turned out to be exceedingly dilapidated and obviously unused for many years.  There was a really green and pretty meadow down below it, however, and I could see why the horses would love it. 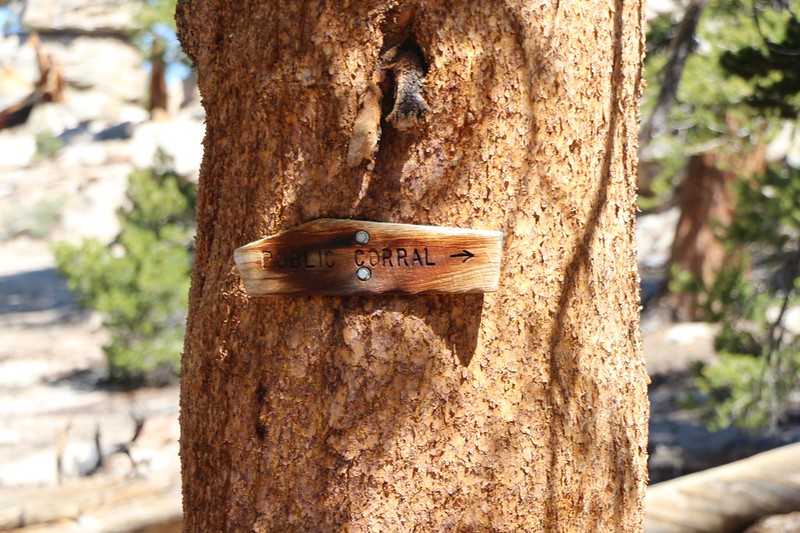 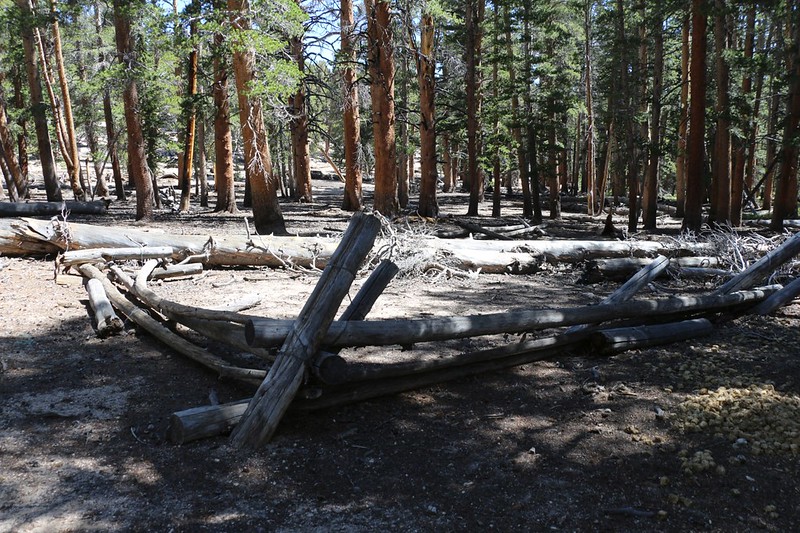 Meadow at PCT mile 738.3 near the Public Corral – the stream leads down into Ash Meadow

After a boot-off break at the corral, we continued uphill, around the flank of Ash Meadow Peak.  There were plenty of fine views to the west and south.  Cumulus clouds were building as the day headed into afternoon, and we wondered if there would be any thunderstorms later on.  Meanwhile, we hiked on happily. 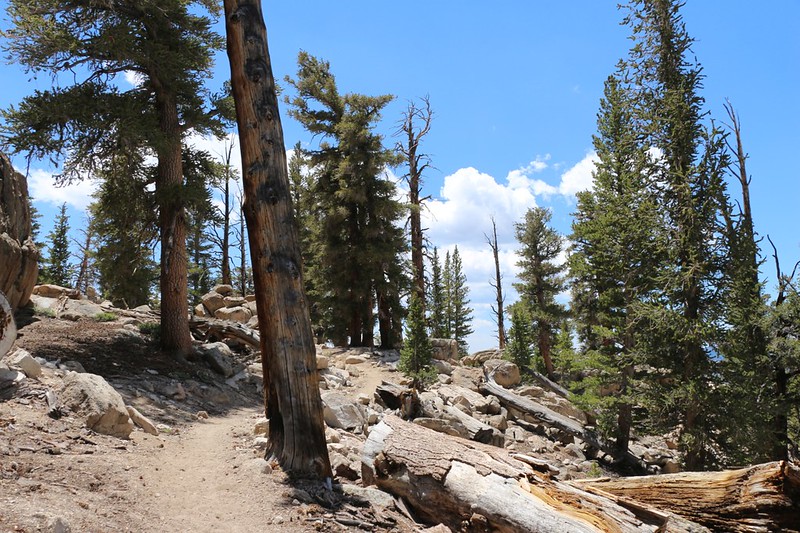 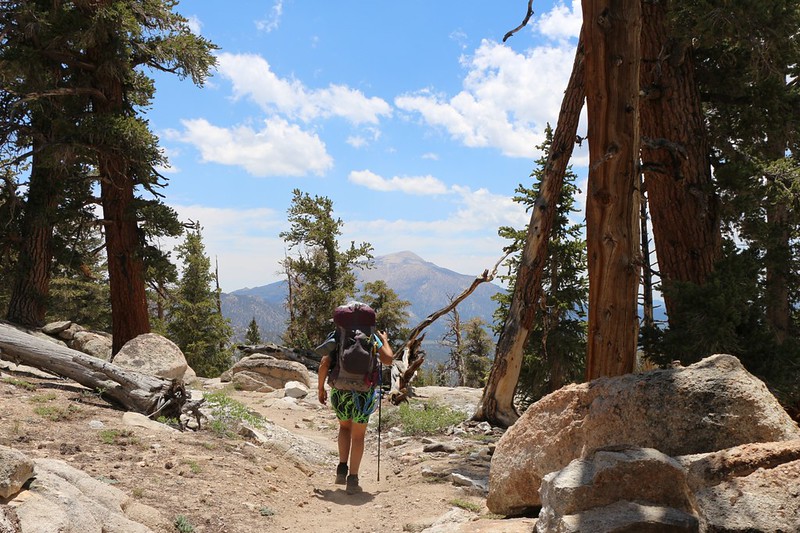 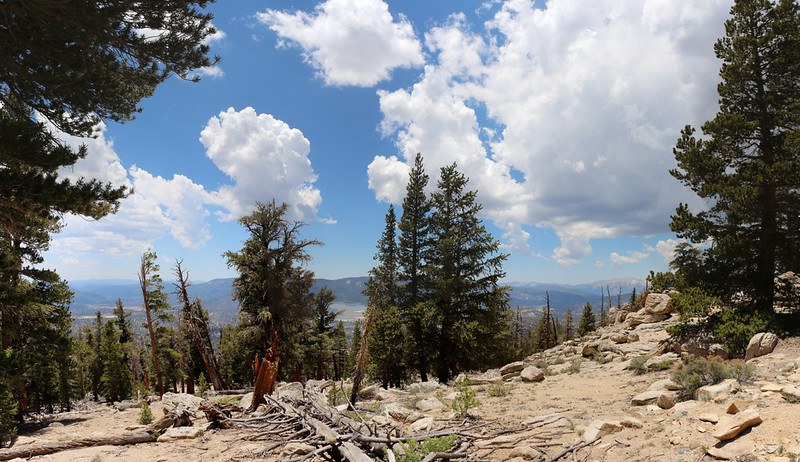 Cumulus clouds were building in the west as it neared 1pm

Before we knew it, we had arrived at our destination!  It was still early afternoon and we’d hiked over six miles.  Not bad!  We got lucky, because if I hadn’t checked my GPS then we would have passed it by, and had to hike back, as this was the last water source for many miles.

Meanwhile, the clouds were building ominously above us, and also to the north along the Sierra Crest.  And then we heard some distant thunder.  Uh oh!  This was sounding serious!  We whipped out the tent and set it up as soon as possible.  I got the air mattresses inflated and we loaded the tent and vestibules with our gear.  The rain began sprinkling lightly.  We took one last look around to make sure we hadn’t forgotten anything and jumped inside the tent.  We had made it into camp just in time!

The big cumulonimbus cloud to the north had drifted south, just enough to pelt us with some decent-sized drops of rain and a bit of hail.  The air got cold and the sky grew dark.  We put on some extra layers and hung out inside the tent for awhile, enjoying the experience.  It’s a good feeling to be dry and snug in your tent while it’s raining outside.  We smelled the petrichor in the air as the dusty ground got wet.  The storm didn’t last very long, but it was fun.  Soon the thunderhead drifted away to the east, and the sun came out once again. 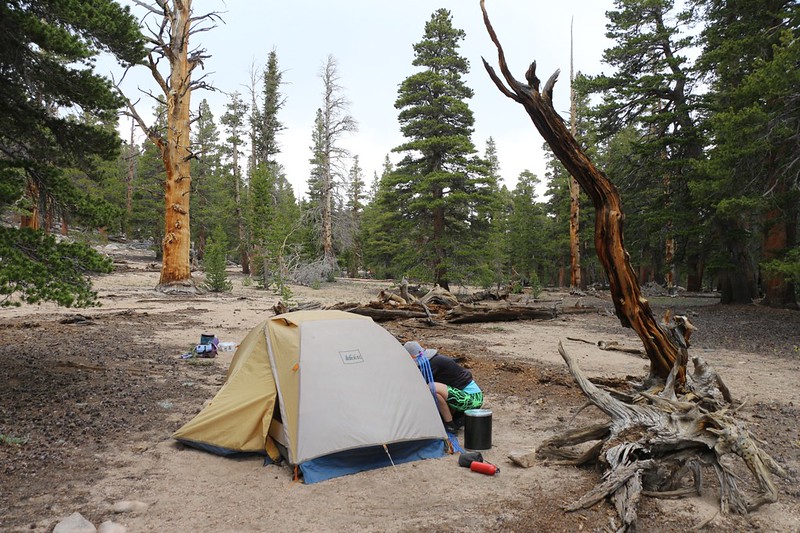 We set up camp early at PCT mile 736.3 on the south side of Ash Meadow – we put up the tent fast in case it rained

Video taken out the tent door as the thunder boomed 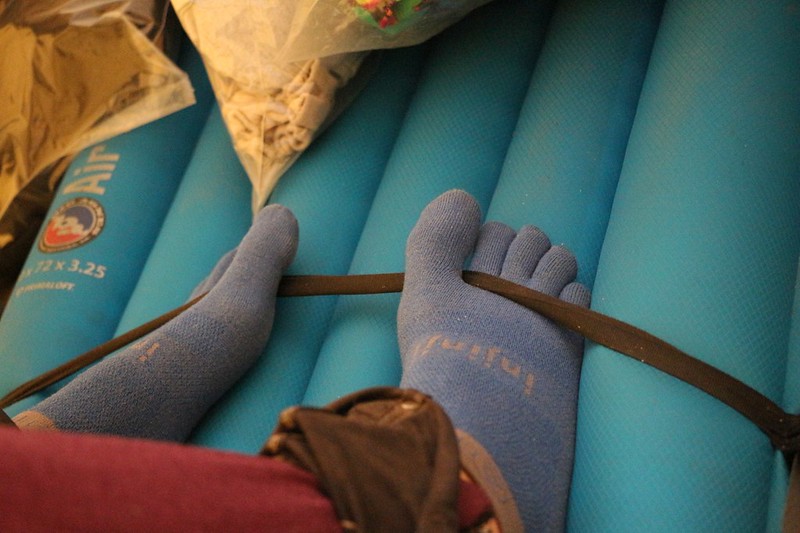 Then it was time to attend to the usual afternoon chores.  We were camped at a saddle, directly on the Sierra Crest, and the nearest water was reported (by the Guthook PCT app on my phone) to be about a half mile downhill to the northeast.  So we grabbed our water containers and hiked down to the spring, which was flowing slow but clear.  As I bent down to collect my first two-liter bag of water, I was attacked by a horde of mosquitoes!   They were relentless, and I’d left my DEET in camp.  But they also seemed to be hanging out only by the water.  Once again, we decided that filtering water right here was completely out of the question.  We collected our usual two gallons as quickly as possible.  I got a bite or two, but it could’ve been much worse.  We carried the water jugs back to camp, treated them with the Aquamira drops, and enjoyed a mosquito-free afternoon. 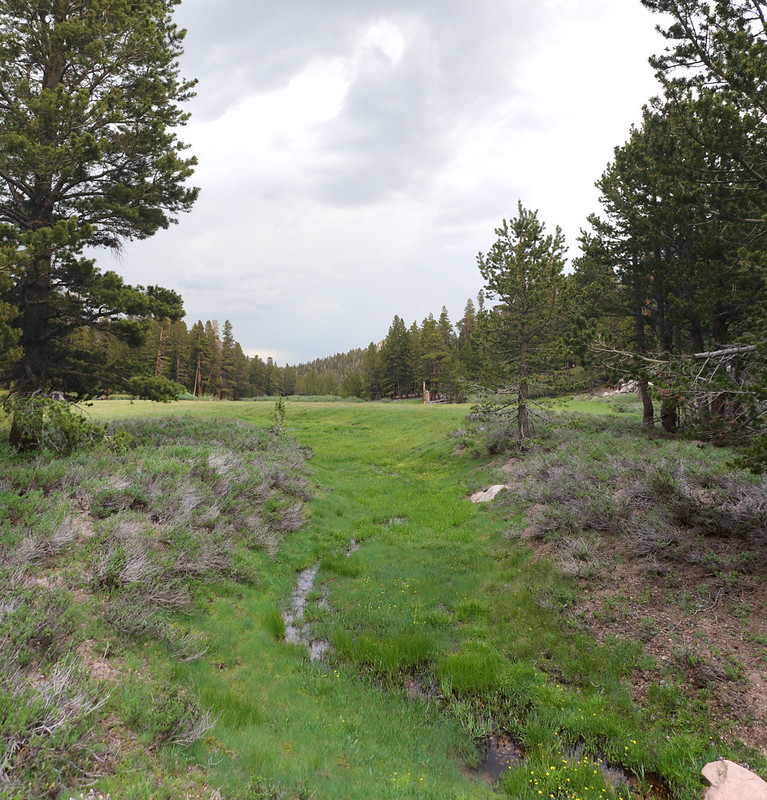 The seasonal spring near our campsite where we got water – there were tons of mosquitoes!

We hung out in camp and read our books, and generally had a mellow afternoon.  A few northbound PCT hikers came by but none of them stopped for the night.  Everyone was still talking about the earthquake the day before, but none of them had felt it, as they were hiking at the time.  And the faster ones already had news about the road closure at Horseshoe Meadows, and we wondered if we’d be able to get back to our car four days later.  But there was nothing that we could do, so we didn’t bother worrying.

After that, we decided to cook dinner a bit early, and get to bed before sunset.  We knew that tomorrow’s hike was going to be over eight miles, a long day, and it would be uphill in the beginning, but downhill most of the way.  We set the alarm to wake up early, and decided to eat one of our no-cook “Bug-Out” breakfasts to help us get going as early as possible.

I also gave Vicki an extra hug for not getting lost.  Us buddies have to stick together.