Since we’re PCT Section Hikers, Vicki and I decided to do this particular section of trail in the southbound (SOBO) direction, mostly because it would end up being a net downhill hike, and partly because we’d meet more hikers that way, since the majority of folks this time of year hiked northbound (NOBO) in this area.  Of course, this was 2020, the year of the COVID-19 pandemic, and the Pacific Crest Trail Association had tried to persuade all through-hikers to cancel their trips (which was humorously called NOGO).  Many people abided by the decision (which wasn’t binding, as the permits had already been issued) but there was still a hardened core of hikers that wouldn’t allow their long-planned trip to be halted by either Hell or High Water.  Vicki and I were members of that elite cadre.  And if the trail turned out to be less crowded than usual, well, more power to us!  If we were going to utilize “Social Distancing” to keep the virus at bay, then we’d do it out in the Wilderness, where the nearest human might be miles away.  Much better than hiding at home!

Luckily for us, the Inyo National Forest changed their permit system due to the pandemic, and allowed us to to get our permits via email.  It was quite easy once they got all the kinks worked out.  We were starting the hike at Horseshoe Meadows, taking the Trail Pass Trail, which has no quota, so life was good.

The total trail length was about 42 miles, so we divided it up into six days of backpacking, taking into account the amount of uphill climbing and water availability to determine the location of each night’s campsite.  Some days would be tougher and some easier, but none of them would be exceedingly difficult.  Why suffer?  We were on vacation!

The real problem was that we had to take two cars, since shuttle services weren’t working, and hitchhiking was out of the question.  So we left Vicki’s car at the destination trailhead, the Kennedy Meadows Campground, and then both of us got in my car and headed north to Horseshoe Meadows. 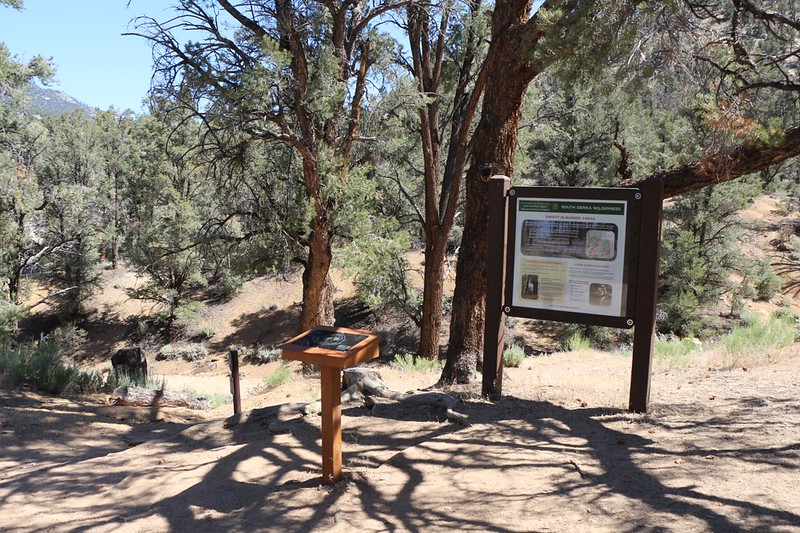 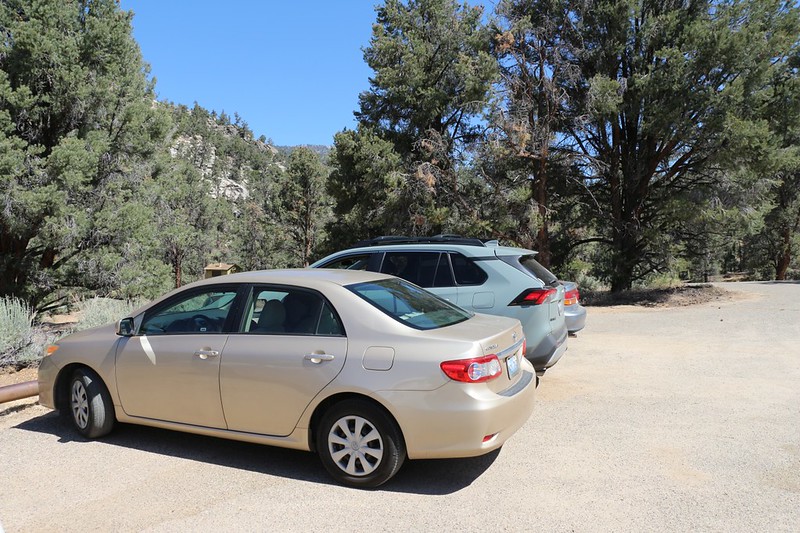 We left the Corolla at the hike’s terminus in Kennedy Meadows, then headed north in the Rav4

When we got there, we discovered that the Inyo National Forest had yet to open the parking lots and campgrounds at Horseshoe Meadows!  There was a locked gate about a half mile down the road, and everyone, dayhikers and backpackers alike, was parking along the side of the road.  It was stupid, but there wasn’t anything we could do to change it, so we found a parking spot and got ready to spend a night right there in the back of the Rav, at 10,000 feet elevation.  We fully intended to get in a full night’s acclimation to high altitude, and that’s what we did.  Other folk simply carried their gear to the closed campgrounds and stayed there anyway, regardless of what the Forest Service wanted.  It was a fairly lawless time in the High Sierra, during this year of the Covid virus.  It was like the Wild West of old, where there were no rules, so people did whatever they thought best. 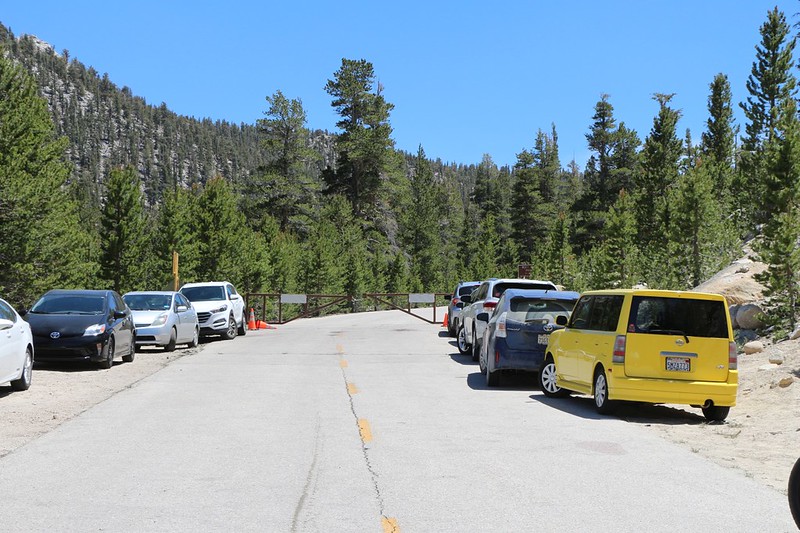 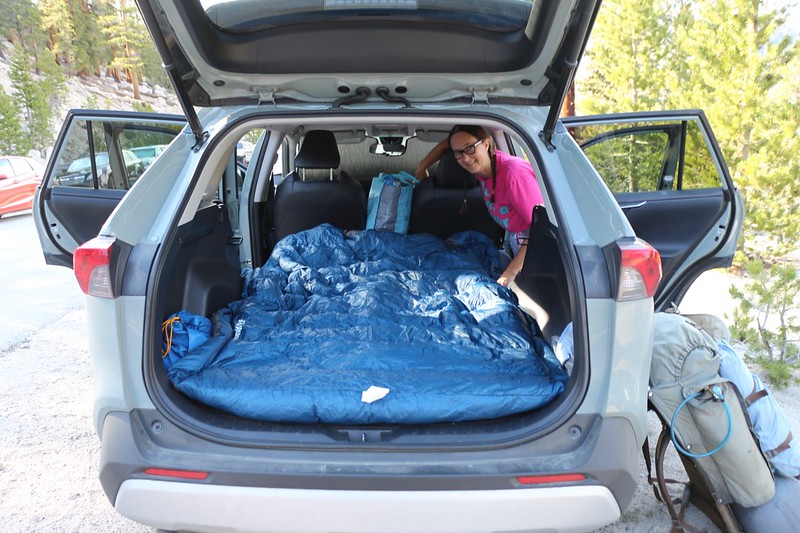 We had bought our dinner down below in Lone Pine, where it was 104 degrees, and then ate it up high where the temperature was in the seventies.  Lovely weather.  Just the same, it got cool rapidly as the sun set, and we were happily snuggled into our warm down quilt by nightfall.  We had a fairly easy hike planned for the next day, so we woke up when the sun hit the car, and ate a proper freeze-dried meal with coffee and hot chocolate.  Then we finalized the packing of our gear and made sure that the extra “car food” was in a cloth grocery bag, so we could carry it with us to the trailhead and put it into a proper bear locker.  We’d have to remember to retrieve it when we came back, six days later. 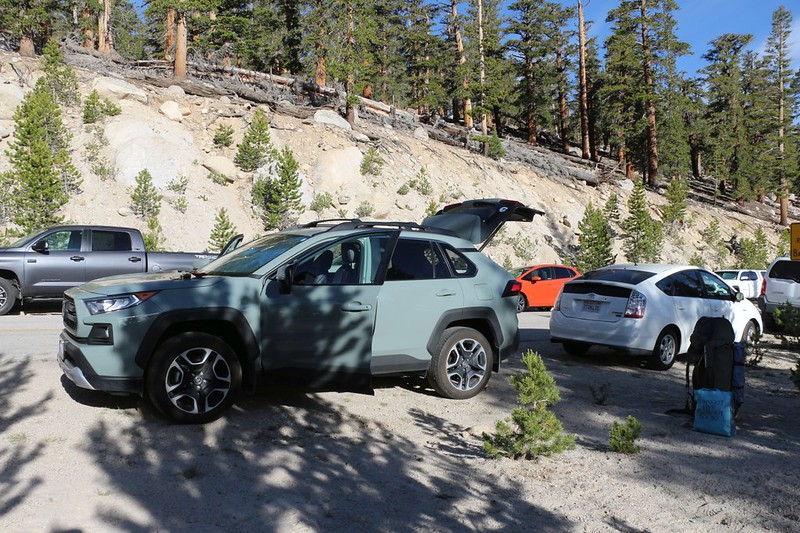 We woke at dawn, ate breakfast, and finished packing our gear for the six-day hike

The walk to the trailhead added about three quarters of a mile to our day, so it would be closer to seven miles than six, but we weren’t too worried.  We just had to climb about 700 feet to the top of Trail Pass, and after that it would be mostly downhill to Diaz Creek.  We dropped off the extra food, took some obligatory photos at the official trailhead, and continued onward. 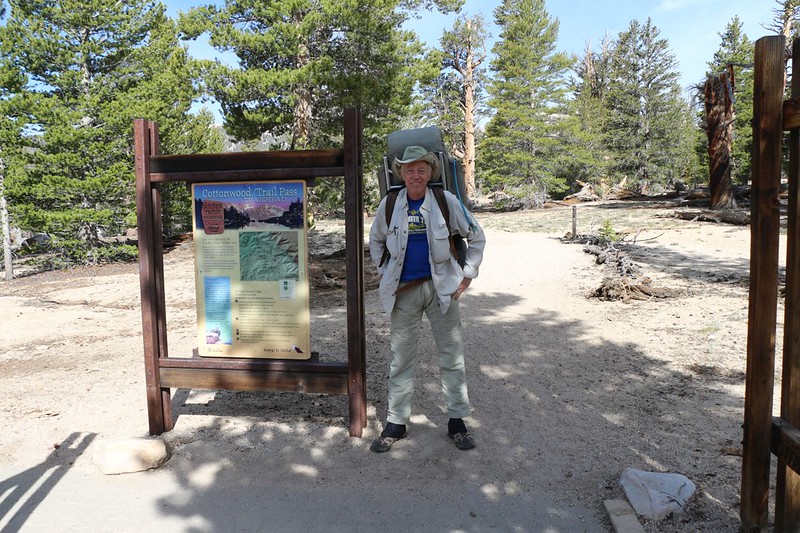 Me, looking clean and fresh at the Trail Pass Trailhead sign in Horseshoe Meadows 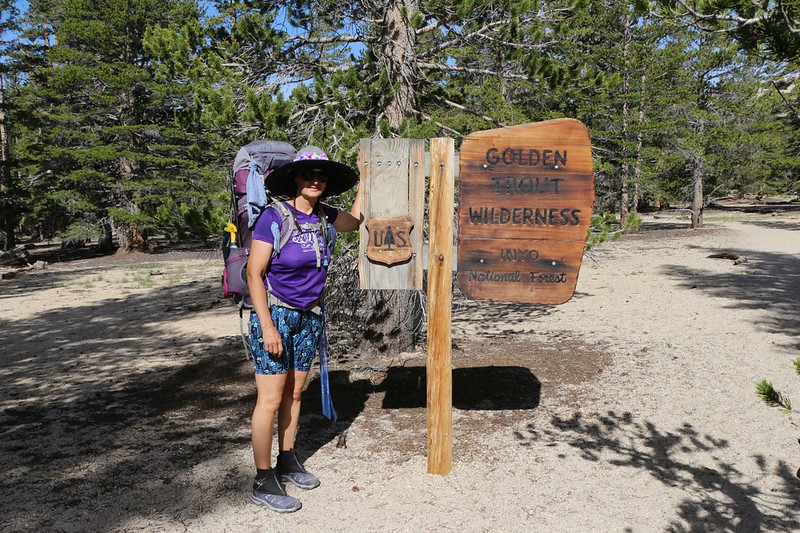 It was about two miles to the pass, and most of it was spent crossing Horseshoe Meadows in the morning sun.  It got a bit warm for Vicki, but she stayed cool by wetting her hair in the creek.  As we climbed up the slope on the far side of the meadow, Mount Langley, one of the California Fourteeners, came into view.  It still had a bit of snow on it, as it was early Summer. 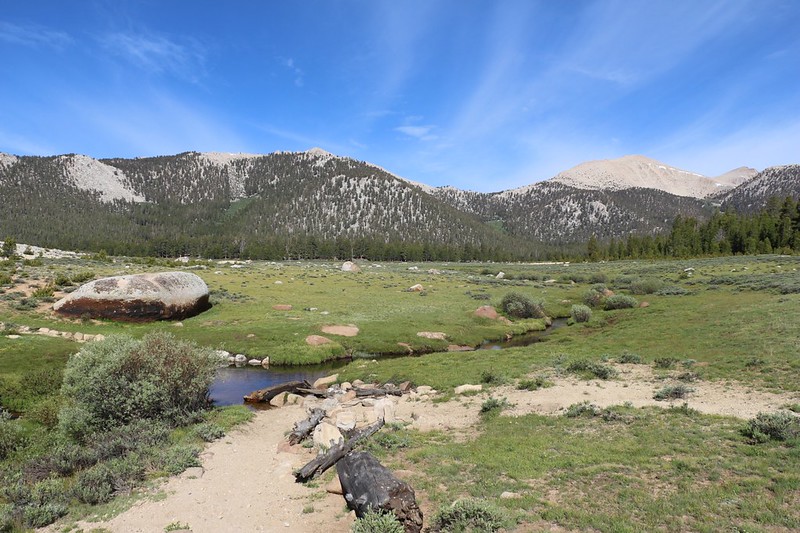 Crossing the creek in Horseshoe Meadows. The old log bridge had broken and vanished so we hopped on rocks. 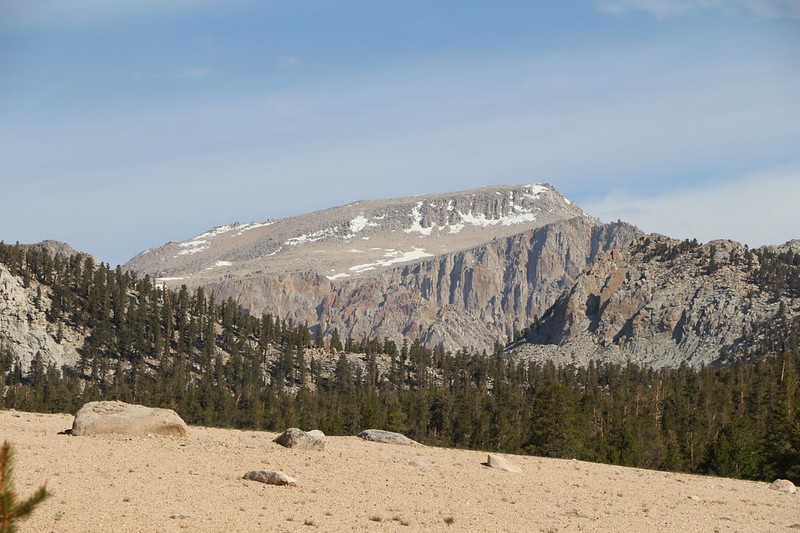 At first, we were happy to reach the forested section of trail, because of the nice cool shade, but then it started climbing uphill, and we started sweating all over again.  Vicki got out the spray mister and really started soaking herself down, and soon she was cooling down nicely.  It was a sparsely-treed forest, so there was plenty of sunshine blazing down.  We made it a point to stop for breathers in the shady patches. 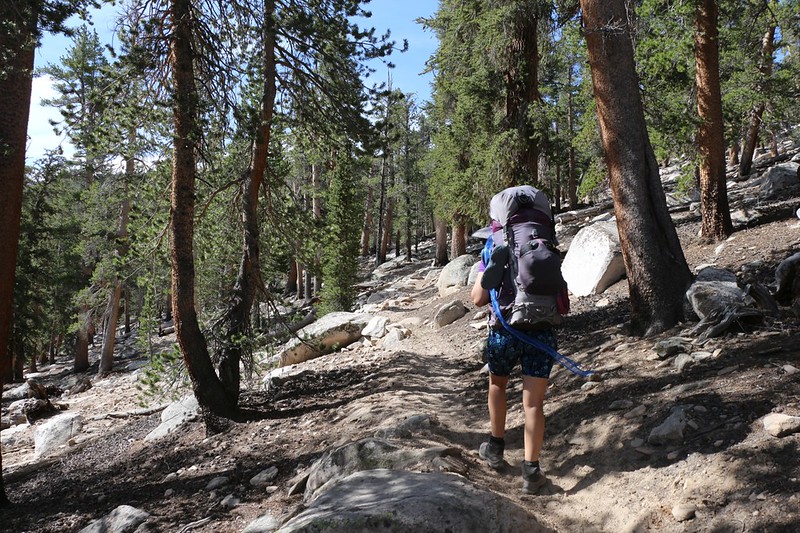 Vicki tried, but she eventually ran out of energy, and we stopped for a long break.  She took a nap, which always seems to help re-energize her, while I read my book.  It was a peaceful day, and we had only seen two hikers thus far.

Actually, it was peaceful for about ten minutes, and then an Earthquake struck!  Suddenly the ground started rumbling and the trees began shaking.  We heard a few cracks as dead branches fell down from above.  I started up a video recording as soon as I noticed it shaking, but I missed the best part.  Oh well.  After it was done shaking, we wondered if civilization still existed somewhere out there, and whether the road up to Horseshoe Meadows was still OK.  We truly had no idea.  And it didn’t change our plans in any way whatsoever.  We were going to keep hiking for the next six days.  Hopefully Civilization would manage to recover without us!

As it turned out, the earthquake was rated 5.8 and it was centered only a few miles away, down in Owens Valley, south of Lone Pine.  And Horseshoe Meadows Road did get closed due to rockslide, but only for a day.  Whitney Portal Road also was closed for a time.  But that was the extent of the damage.  And Civilization marched onward, as always. 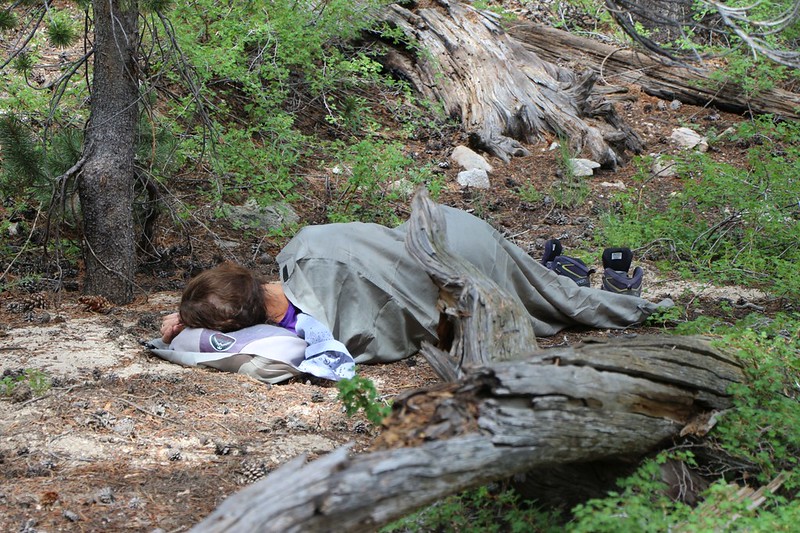 That pretty much ended Vicki’s nap, so we continued onward to the pass, where we took another long break.  We ate some lunch and looked at the map.  Vicki was happy to know that there would only be a few small sections of uphill climbing on the way to Mulkey Pass.   And then she took another nap.  I enjoyed the forest in peace this time. 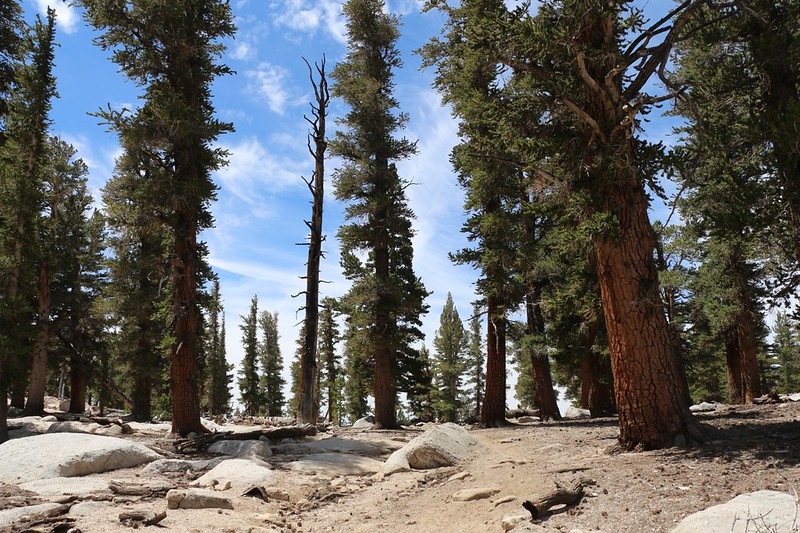 We arrived at Trail Pass, where the trail from Horseshoe Meadows intersects the Pacific Crest Trail 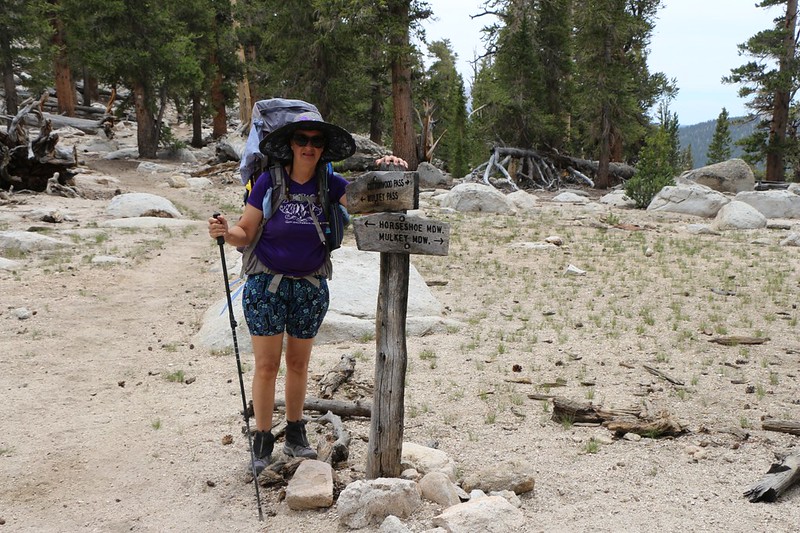 After that, it was time to get down to business, and begin Section Hiking the Pacific Crest Trail!  We were still hiking in the Golden Trout Wilderness, but now were now heading south, high above Mulkey Meadow.  We were up above 10,000 feet, and there were nice views every so often, west to Kern Peak and south to Olancha Peak.  I knew that the trail climbed up along the flank of Olancha Peak, and when I pointed it out to Vicki, all she could say about Olancha was that it was “Boring”, which I didn’t agree with at all.  But we wouldn’t be there for a few more days, so I’ decided to let her warm to it.  It had to be exciting, I felt, as it was considered to be the highest peak in the Southern Sierra.  But she didn’t care. 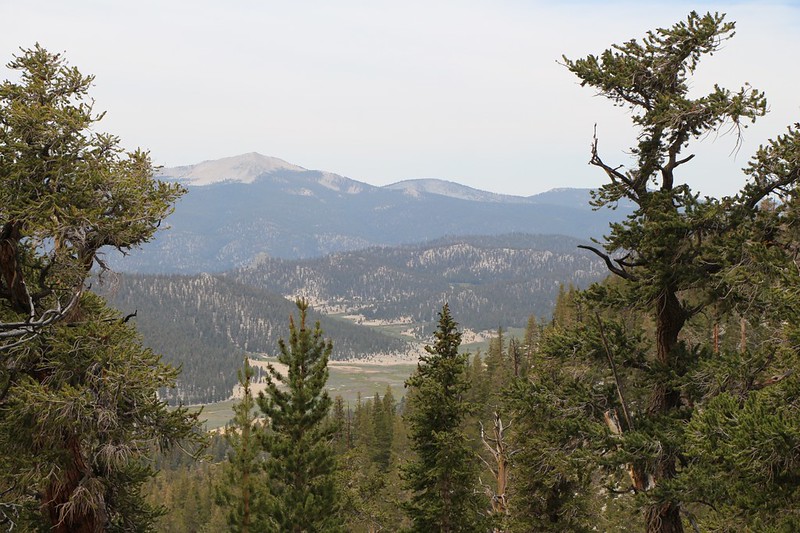 Looking west over Mulkey Meadow from the PCT near Trail Pass, with Kern Peak (11510 feet elevation) on the left 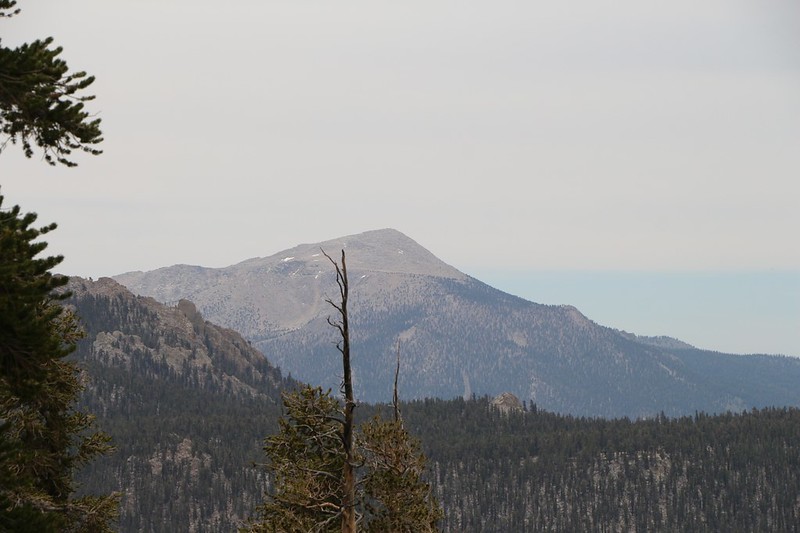 We stopped for a moment at Mulkey Pass, and noted the rarely used trail crossing the PCT.  I believe that it is no longer maintained, as it isn’t on the official list of reservable trailheads.   And then we hiked on.  We meandered through more of that sparse pine forest, and it was easy hiking.  Occasional cumulus clouds had been forming during the afternoon, and we thanked them for the cooling shade that they provided, but none looked like it might turn into an angry thunderhead.  We simply enjoyed the cool shade.  When we reached the side-trail to Dutch Meadow Spring, Vicki took a break and I headed down to the spring and collected a liter of cool water, which I treated with Aquamira drops, as there were a bunch of hungry mosquitoes right at the water.  I didn’t want to stay there and filter it while getting munched by bugs.  Vicki’s water had been getting low, and she was grateful for the addition. 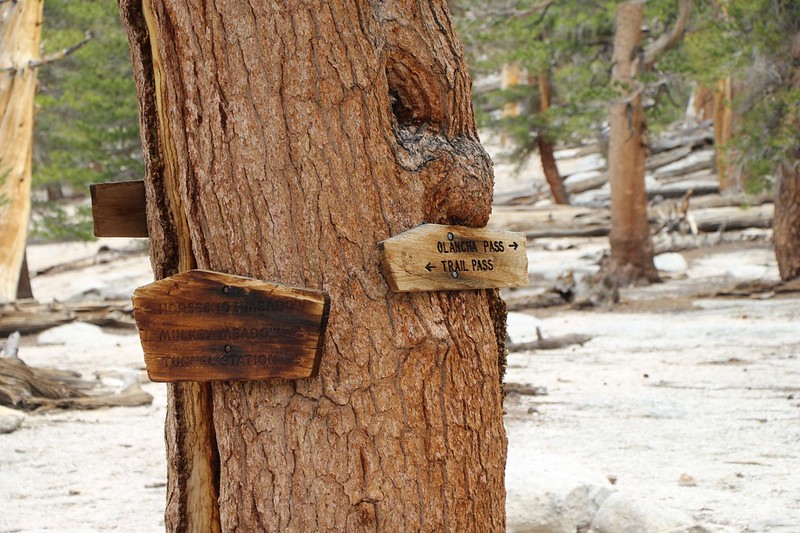 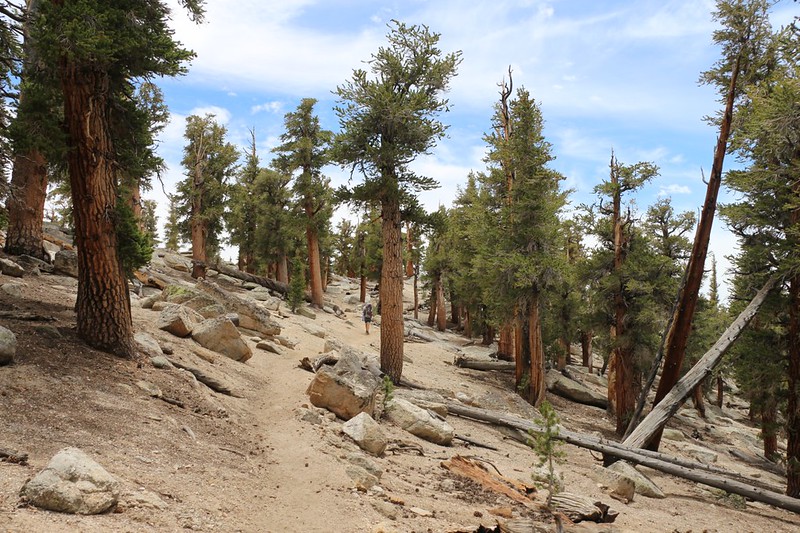 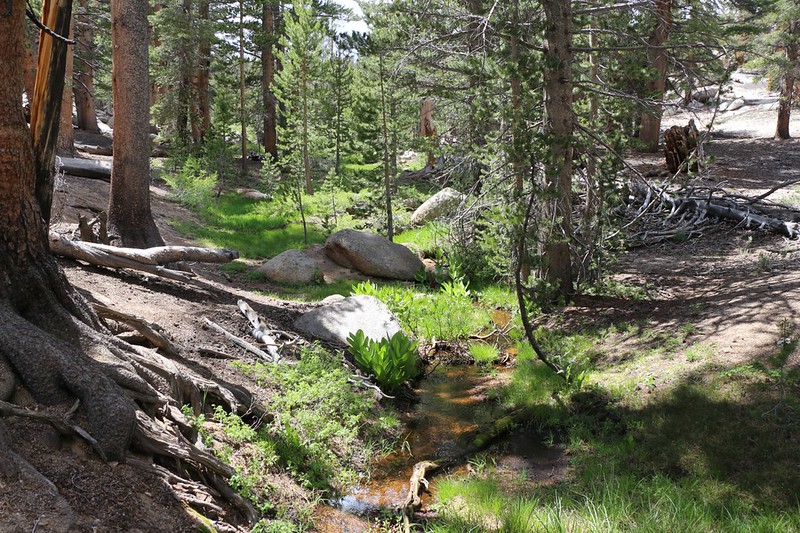 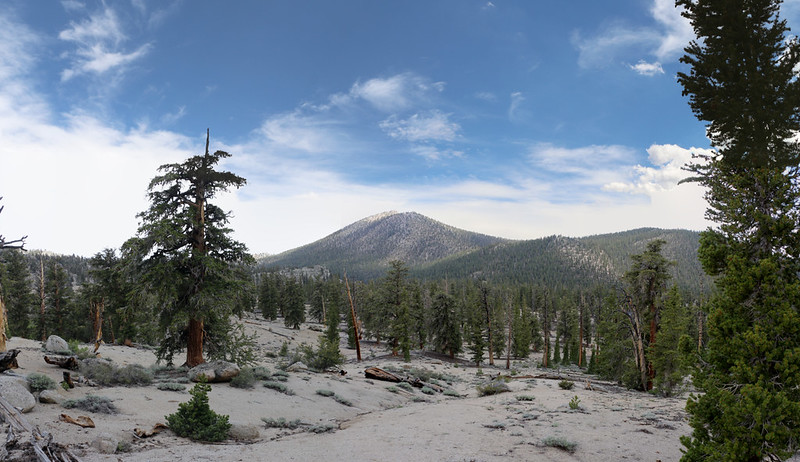 The trail continued downhill for another mile or so, and when I checked my GPS, I discovered that we had made it to Diaz Creek!  We looked around, and chose a campsite not far from the trail, but up on the ridge above the creek, where we figured there would be a breeze that might keep any mosquitoes at bay.  We set up the tent right away, as there were a few dark clouds nearby, and we arranged our gear inside.

Panorama video of our first night’s campsite at Diaz Creek

Vicki took a brief nap in the tent and put on her warmer clothing, while I headed down to the creek to collect our water.  The creek was down in a sandy valley, and the water was clear, so I decided to use the purification drops once again.  I carried the two gallons back up to camp and read my book while mixing and timing the drops.  Very mellow.  Then I joined Vicki in the tent for a short break and changed into my night clothes. 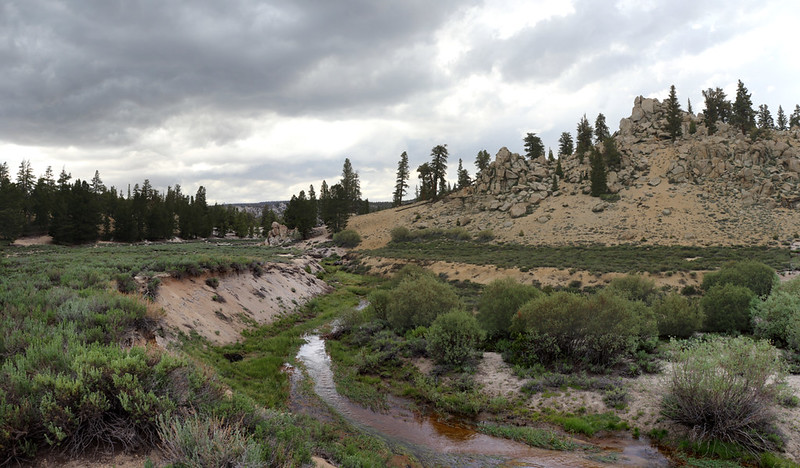 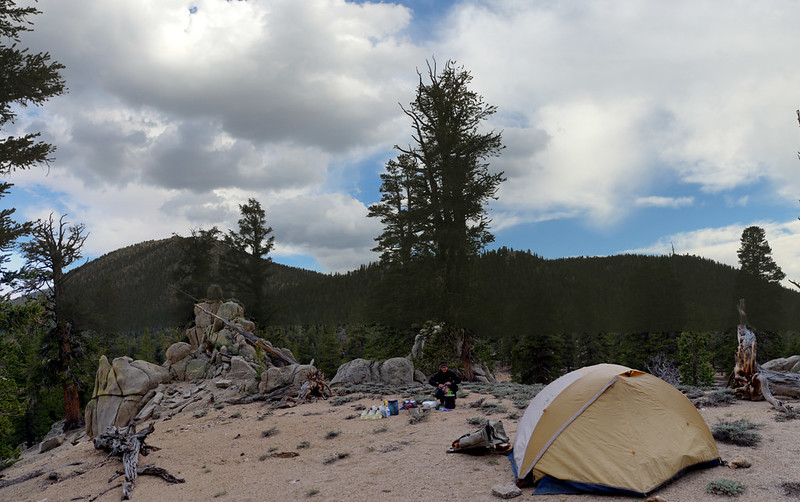 Our campsite near Diaz Creek at PCT mile 742, with Muah Mountain on the left

After that, it was dinner time, the best time of every day.  Our work was done, and we were the only people on the trail in this area.  It seemed that many of the PCT through-hikers had already headed north toward Canada by this time in late June.  We’d only seen a couple of people all day.  But that was OK by us.  In fact, we decided that this was the best “Social Distancing” we’d done in quite some time!