After a few shorter local hikes, Vicki and I decided to attempt a long sixteen-mile hike on a section of the Pacific Crest Trail. This was the first real “hike” of the 2013 season, although we didn’t camp overnight. We also have been dreaming of hiking the entire PCT some day, from Mexico to Canada, but fully realize that we will never be able to get that much time off from work. Hiking the PCT in “sections” will have to do, for now.

The section we hiked was in San Diego, from near Cuyamaca Lake down to Scissors Crossing, where Highways 78 and S2 cross. This corresponds to what is officially known as PCT Mile 62 to PCT Mile 77. Basically, we started up high in the mountains, at 4800 feet elevation, and, over 15 miles, dropped down into the high desert at 2300 feet. So, even though it was a long hike, it was, thankfully, mostly downhill.

Rather than a there-and-back hike with one car, we used two cars, dropping one car off at the end. We also started at dawn, and hoped that we could keep up our pace and avoid hiking in the dark. 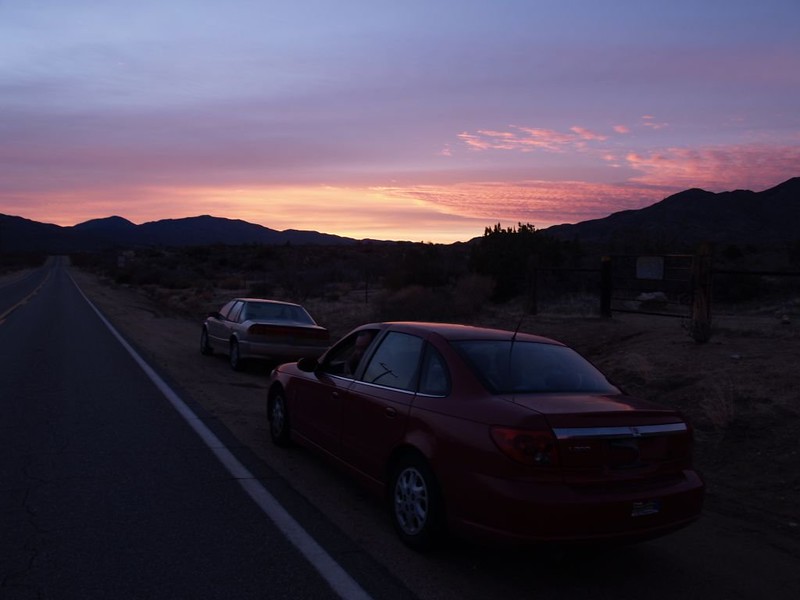 We started at the Mason Valley Truck Trail on Route 78. It is a gated dirt road, closed to cars but perfect for hiking. There were many nice oaks and shady spots along here, but eventually the trees were left behind and we were hiking in open chaparral. No shade whatsoever, in other words, but the chaparral has its own austere beauty, and the high clouds made for some excellent photographs. The dirt road intersects the PCT near the Pacific Crest itself (from a watershed point of view), after which the trail descends steeply into Chariot Canyon. Very steeply. Our toes were smashing into the front of our boots, although we had the laces extra-tight to prevent it. We weren’t happy about this, because on a long hike there are few things more important than the condition of ones feet, but thankfully the steep section didn’t last too long. Our feet survived. Or so we thought. 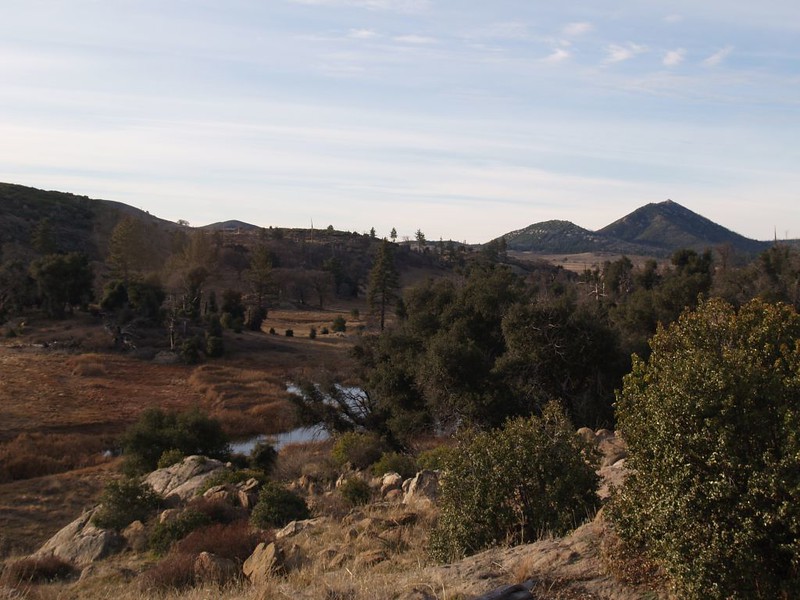 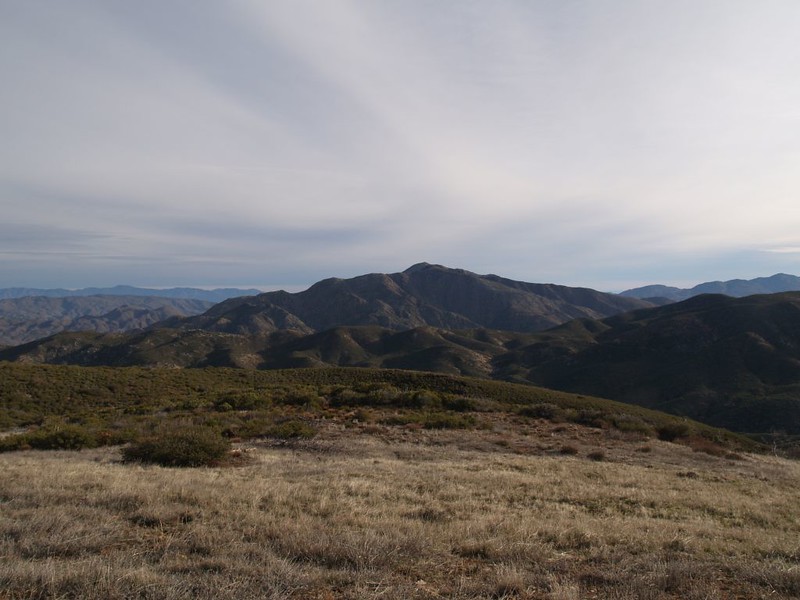 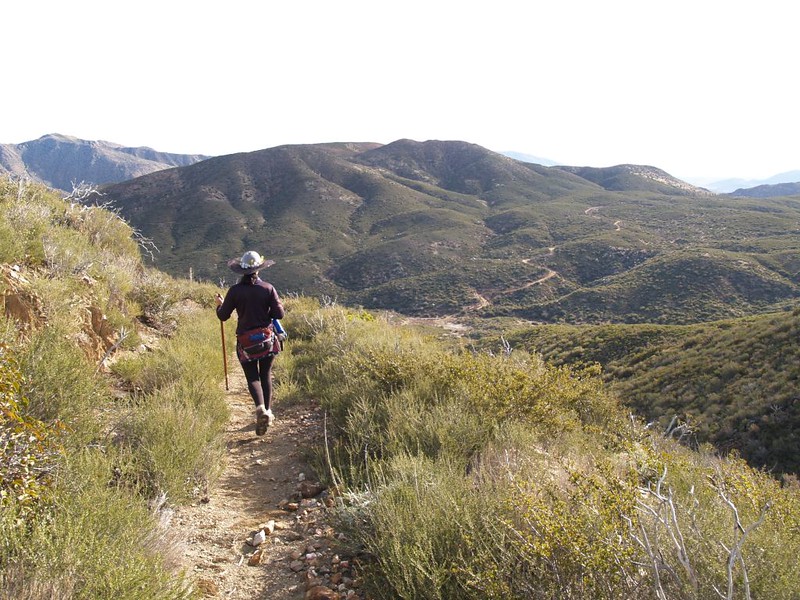 On the PCT hiking downhill into Chariot Canyon, with Chariot Mountain ahead

At the bottom of Chariot Canyon we intersected the California Riding and Hiking Trail, and discovered that the trail signs were a bit confusing, but after consulting both the GPS and the map we kept on hiking uphill on the PCT. Basically, the trail climbed halfway up the side of Chariot Mountain, on a dirt road once again, then left the road and side-hilled along much less steeply for a mile or two. It was nice up there, with good views to either side of the Chariot Mountain Ridge. 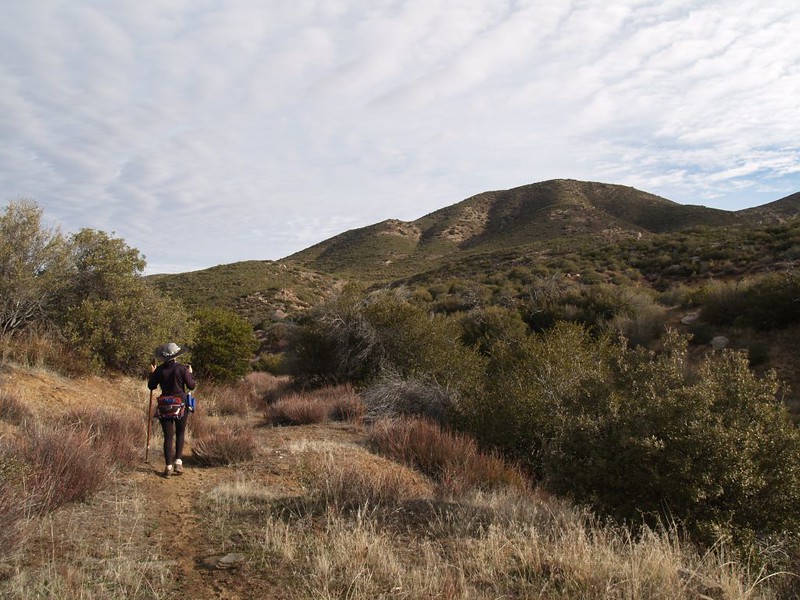 Down in Chariot Canyon 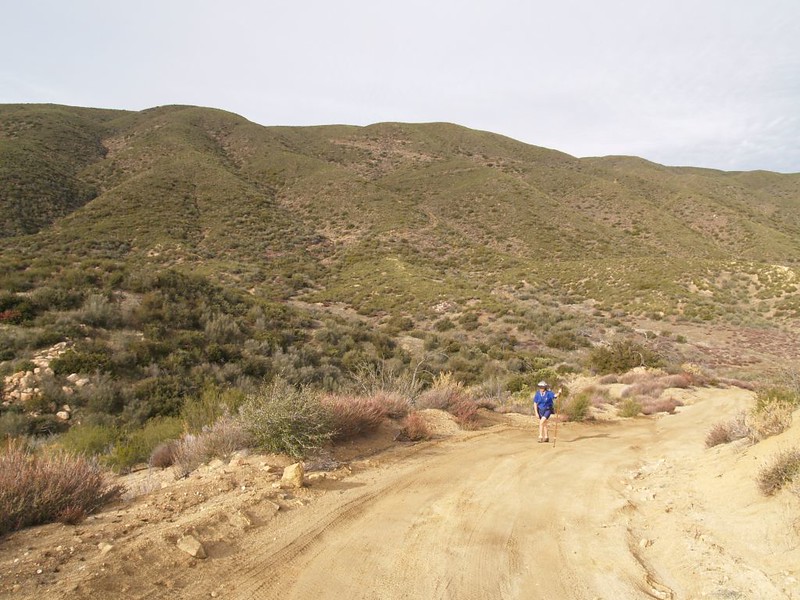 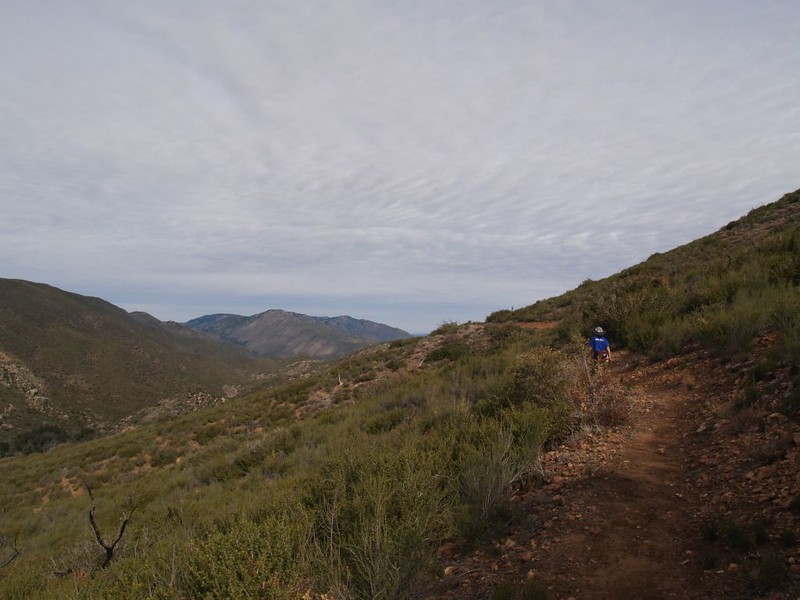 Hiking along the side of Chariot Mountain and Chariot Canyon

Then we began the long gradual descent into Rodriguez Canyon. This canyon lies between Chariot Mountain and Granite Mountain and has a dirt road running along the bottom. We could see, tiny in the distance as we descended, a white pickup truck on the road below us. As we hiked along, Vicki suddenly stopped and said “Did you hear that? It sounded like gunfire!” But I hadn’t heard a thing, as I was wearing my big backpack with lots of extra water/supplies and its shoulder straps squeak a tiny bit (but right next to my ears). A few minutes later she heard it again, and a few minutes after that even I finally heard it. Gunfire, definitely gunfire. It was probably that white truck, which was now a lot closer, and we could see several people standing near it. We also noticed what looked (very likely) to be two targets set up a short ways in front of them. Unfortunately, the positioning of these targets meant that the guns were aiming almost directly toward us! But down low on the canyon floor, of course. Still, it didn’t make us really happy. What if they wanted to shoot at MOVING targets? Nah, that was the paranoia and fear talking. In fact, they had set up their targets using the hill as a safe backstop for any errant bullets, as is proper for gun safety. Just because we were high up on that hillside didn’t really mean much, unless they were extraordinarily bad shots. Still, Vicki whooped out a big “Yoo Hoo!” (when we got to the next particularly exposed spot) to let them know we were there. We hoped that they’d heard her, and, in the meantime, began hiking much faster, trying our best to get out of the direct line of fire. Good thing the trail was downhill. We were even happier that it weaved in and out of direct view as it side-hilled along the wavy ridge. There’s nothing quite so satisfying as keeping a lot of dirt between you and the nearest stray bullet. 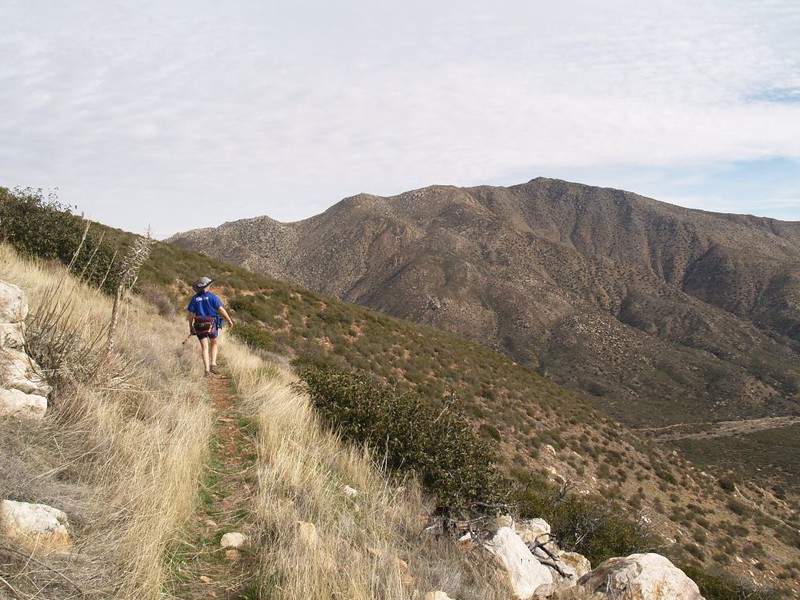 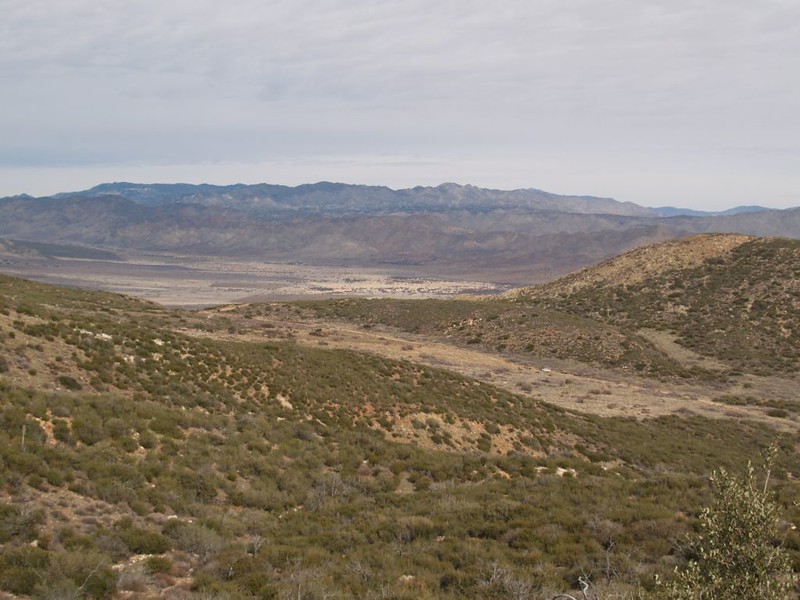 Soon enough the excitement was over, and we were nearing the PCT intersection with Rodriguez Canyon Road. This was the hike’s halfway point, and our only real bailout opportunity. We decided to have some lunch and, in the meantime, check both our feet and our progress. Our feet were a bit warm, but we aired them out while eating, and our time was great. We were halfway done, and it was well before noon. If we kept up this pace we’d be finished an hour before sunset. Nice! So we decided to finish the hike, and not head two miles down the dirt road to Highway 78 and the town of Banner, where we’d be forced to either hitch hike to our car or call home for someone to drive all the way out and rescue us. No thanks. It was a beautiful day for hiking. I did, however, carry a change of socks, which would give my feet new life. I hung the old damp ones on the back of my pack to dry. 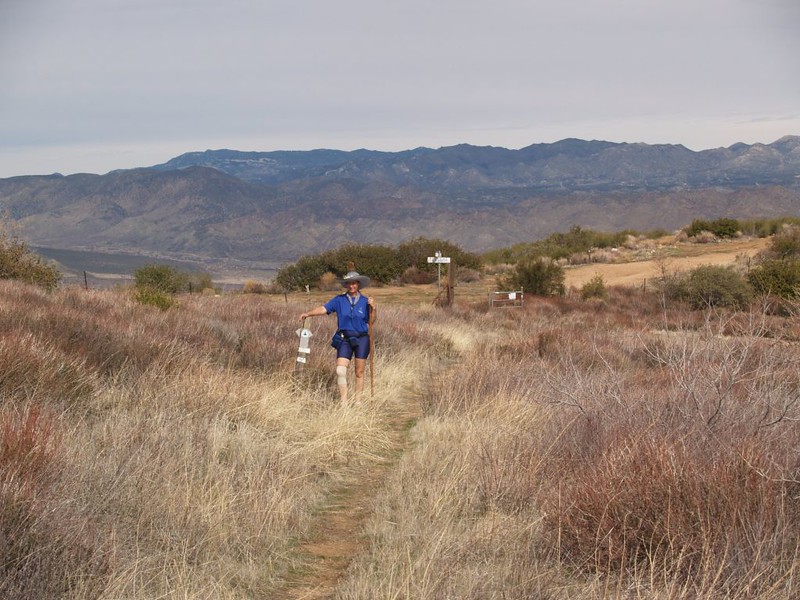 At the Rodriguez Canyon Road Crossing, we also checked out one of the very few places for PCT Hikers to find drinkable water out in this dry desert country. There was a large cement water tank, full to the top, which was there primarily in case of brush fires, and kept full at all times. The metal lid on top lifted up to reveal enough water to satisfy an army of PCT Hikers. There was even a rope with a rock and a water bottle tied to it, perfect for lowering into the tank. It looked OK, but I’d still filter it before drinking. We didn’t have to worry as I was carrying plenty of water in my big pack. 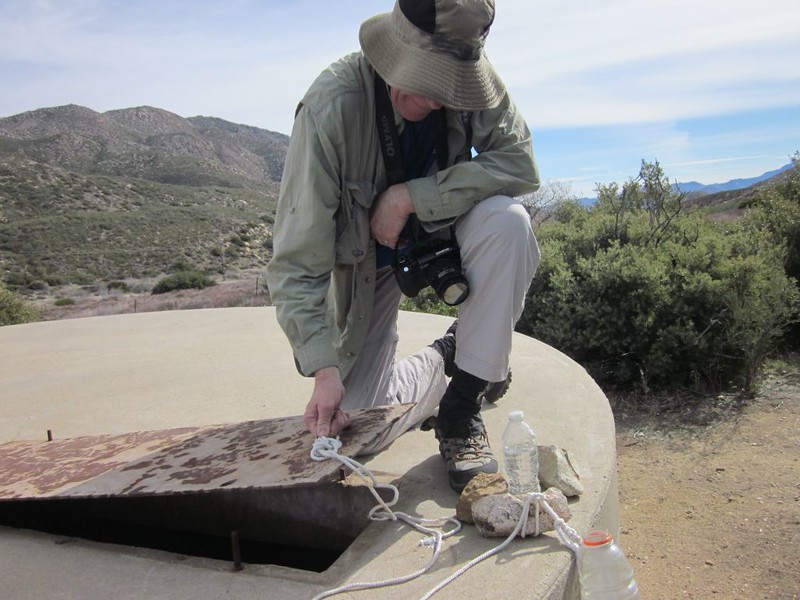 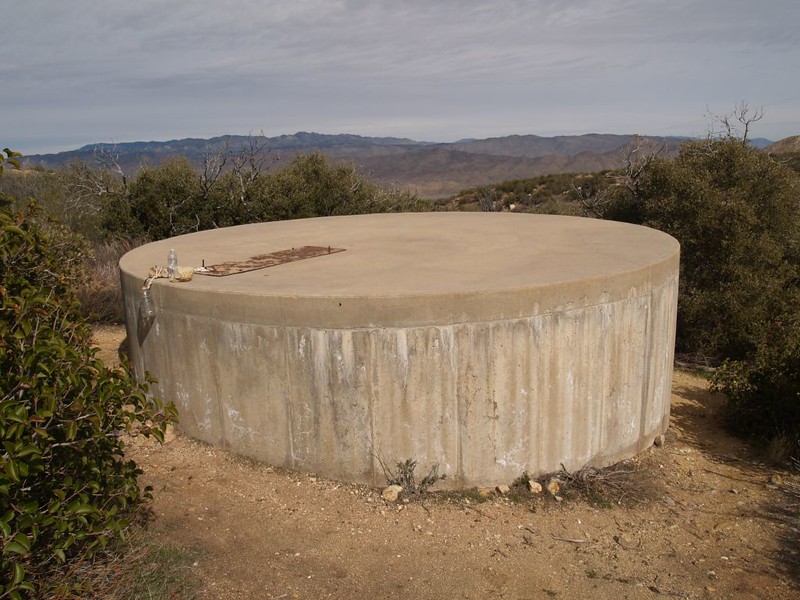 We cut lunch short thanks in part to the sound of gunfire in the distance, as it made it difficult for Vicki to take her usual mid-hike nap. Plus, we wanted to keep hiking while we were feeling good, and not end up hiking at night. We’d done that once before, on the last part of this same section of trail, when we’d hiked up Granite Mountain. 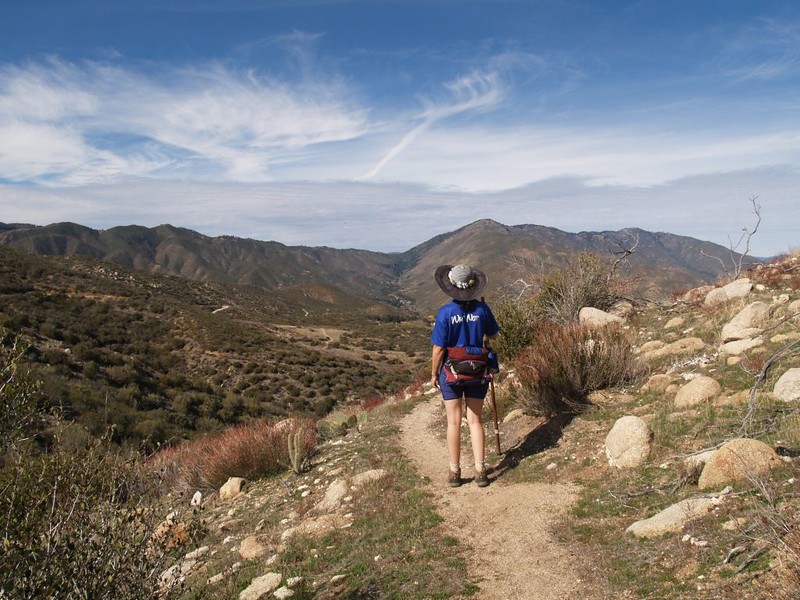 From this point on, the PCT followed along the north side of Granite Mountain, high enough above the Valle de San Felipe (San Felipe Valley) to make the views truly excellent while not climbing so high that we had to work very hard. Yes, there were a couple of uphill sections, but for the most part it was miles of easy downhill hiking. 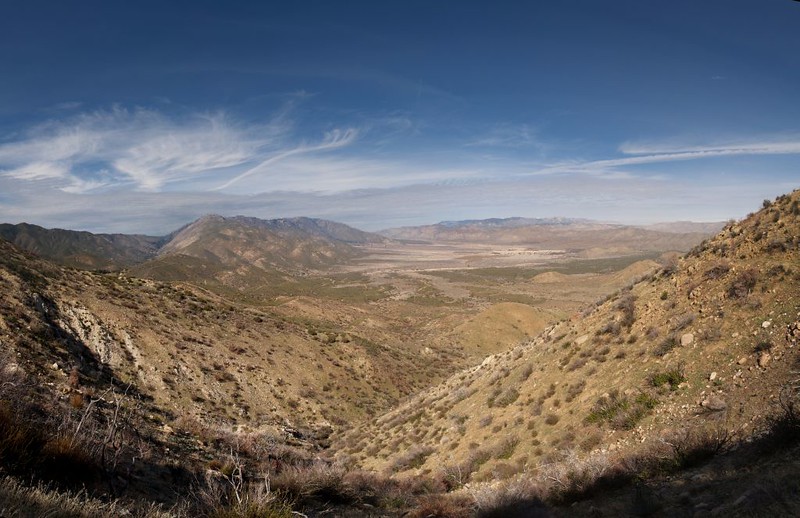 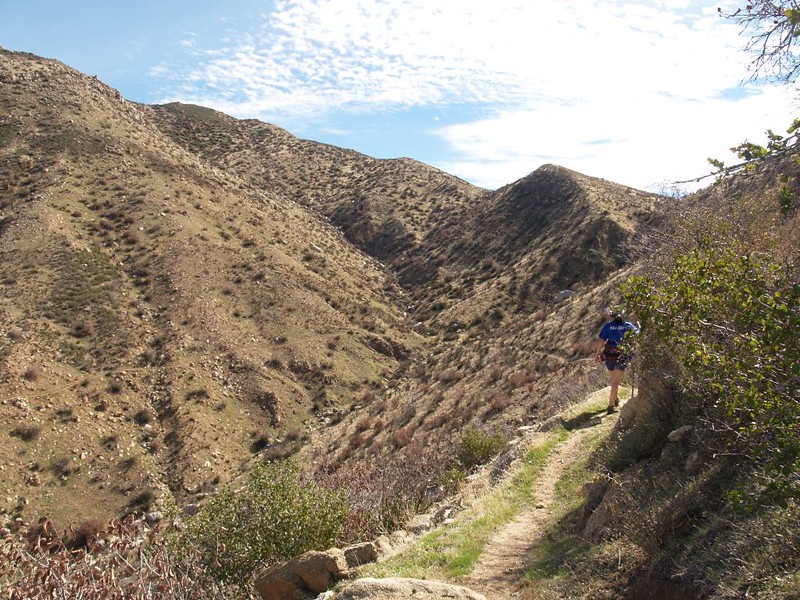 Hiking along the north slope of Granite Mountain

Along the way we saw signs of both old and recent brush fires, with plenty of burned cactus plants. Not the most beautiful stretch of the trail, by any means. But, I’ll admit that we derived a certain grisly pleasure in seeing the burnt remains of cholla cacti, their evil thorns incinerated, their malevolent armor rendered harmless and inert. Normally they remain dangerous even in death, their parched and shrivelled carcasses a nasty pile of thorns. But not these. And just think: Countless PCT hikers will be able to walk by for years to come without getting stabbed by these plants. Until new ones grow back, of course. It’s just a matter of time, as nature always heals itself eventually. 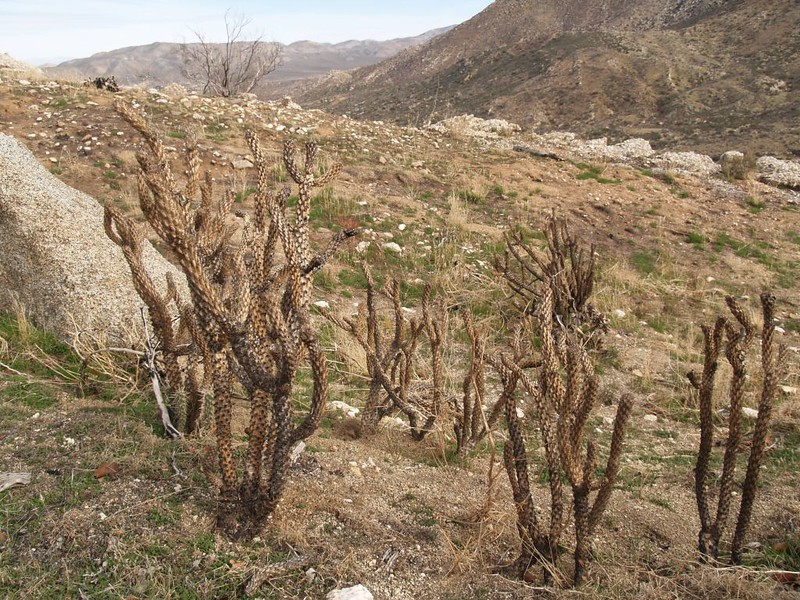 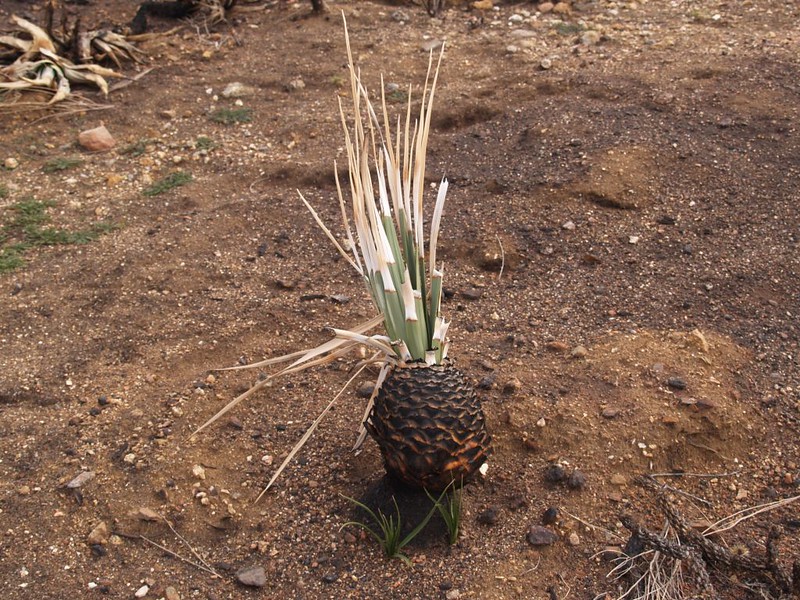 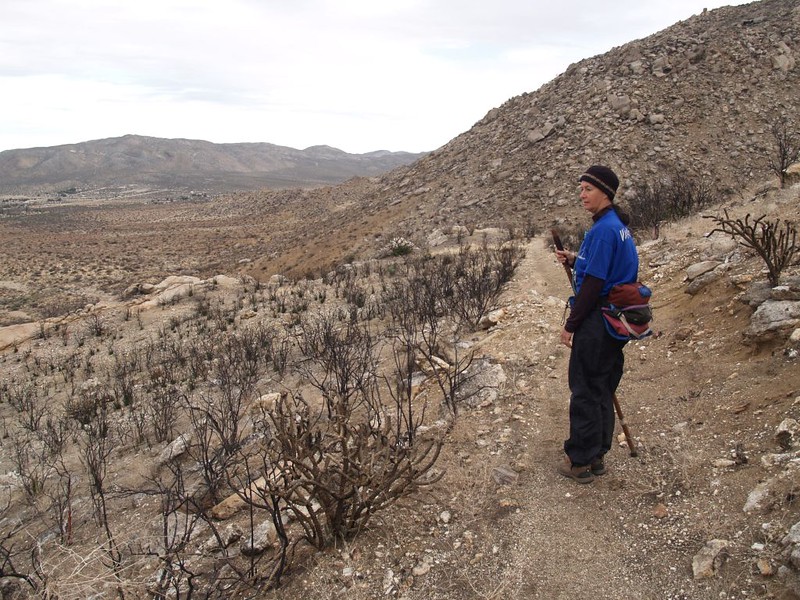 Off in the distance across the valley, we could see the San Felipe Hills, which would be the next section of the PCT that we would hike. And we saw our destination, Scissors Crossing, getting closer as the hours went by. Soon enough, we were down on the desert floor, hiking gradually downhill toward Route S2 and the car. Easy hiking, but our legs were getting sore and our feet felt quite hot and painful in spots. OK, I’ll admit it: We’d been barely hobbling along for the last hour! We opened up the car and relaxed for a bit. I changed my socks once more and put on some light driving shoes. But not before checking out my feet: I had two blisters on my left foot, and my left big toenail had a blood blister along the cuticle. Ouch! I was almost certainly going to lose that nail. It was that first steep downhill that did it, I felt certain. Oh well. These things heal. Next time I’ll cover the blistered areas with duct tape beforehand, trim the toenails down to the nub, and tie those laces even tighter. 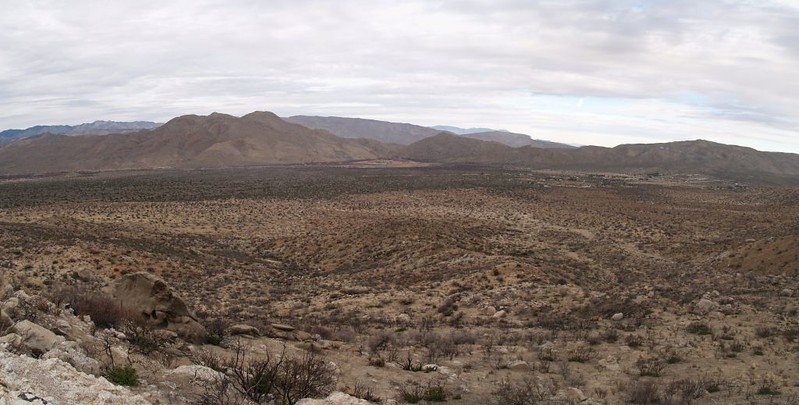 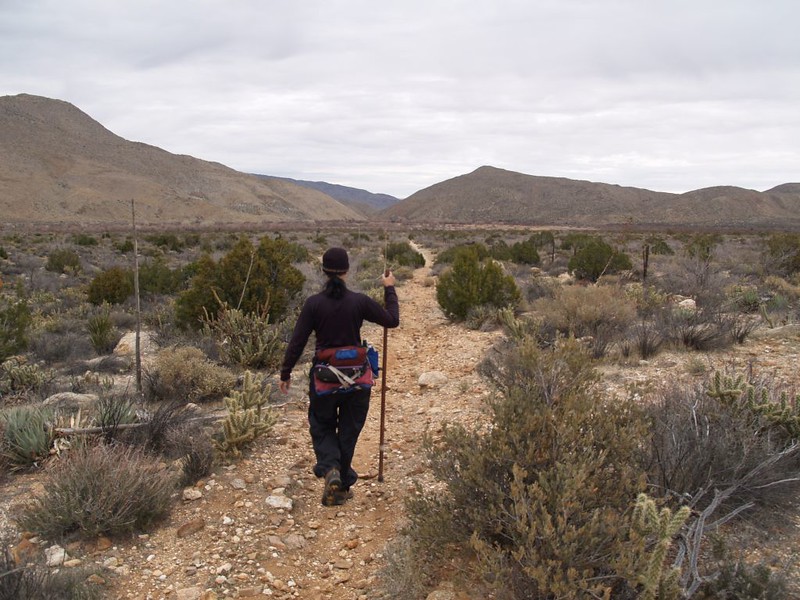 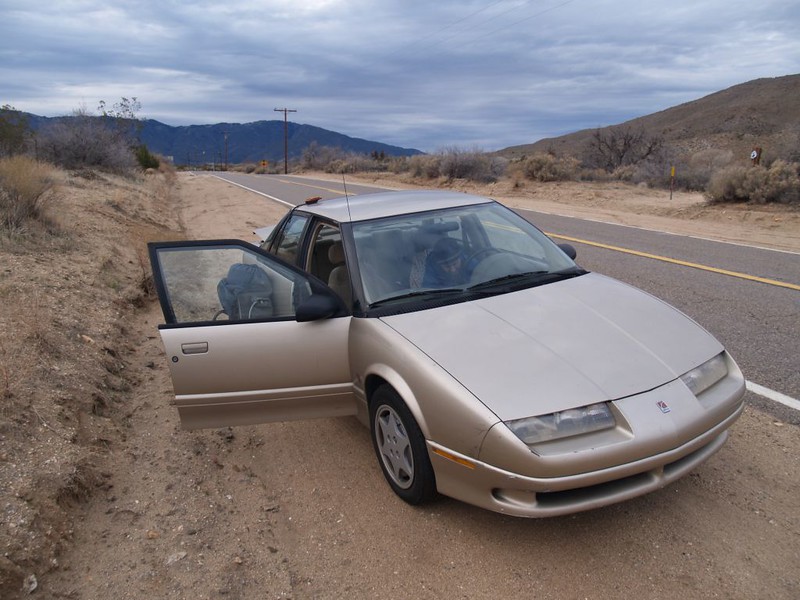 All in all, it had been a fun day of hiking. We made great time, about 1.8 miles per hour (including rests) and arrived at the car with plenty of daylight. Except for the blisters, I think we showed that we are well on the way to being ready for this year’s hiking adventures, with more hikes along the PCT being planned right now.

More pictures from this hike can be seen on my Flickr Album.

An interactive topographic map of our hike can be found on my Caltopo Page.