This was our first full day of hiking on the West Coast Trail, after spending the night in the campground.  We woke up early and had breakfast, then packed everything into our backpacks.  We wouldn’t be coming back here, so everything had to be carried or thrown in the trash.  Our goal for the day was to hike 12 km to the Darling Creek campsite, which was supposed to be prettier than the first possible beach camp at Michigan Creek, which was located at 10 km.

It was low tide, so we started the hike on the beach, and didn’t bother climbing the ladders near the ranger station like we did for fun the day before.  It was an easy half mile to the spot where we would have to leave the beach for the trail within the forest. 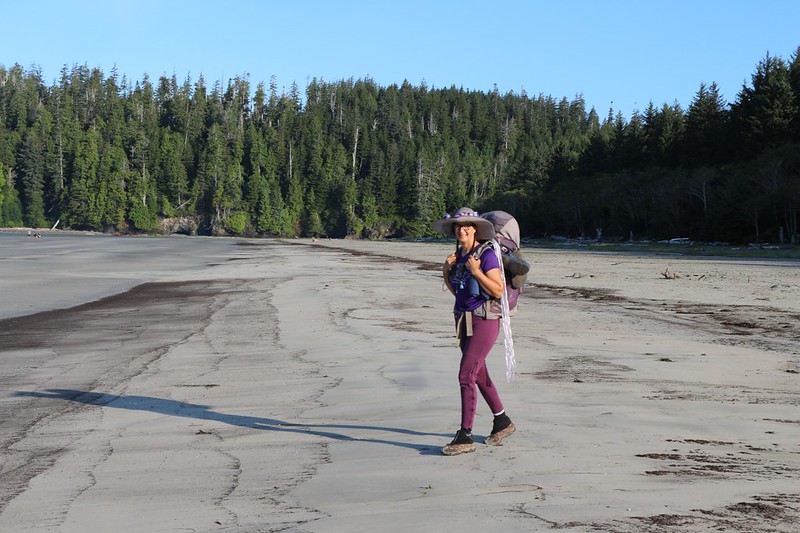 We began our West Coast Trail hike on the beach at Pachena Bay, at 7am, with low tide and sunny skies 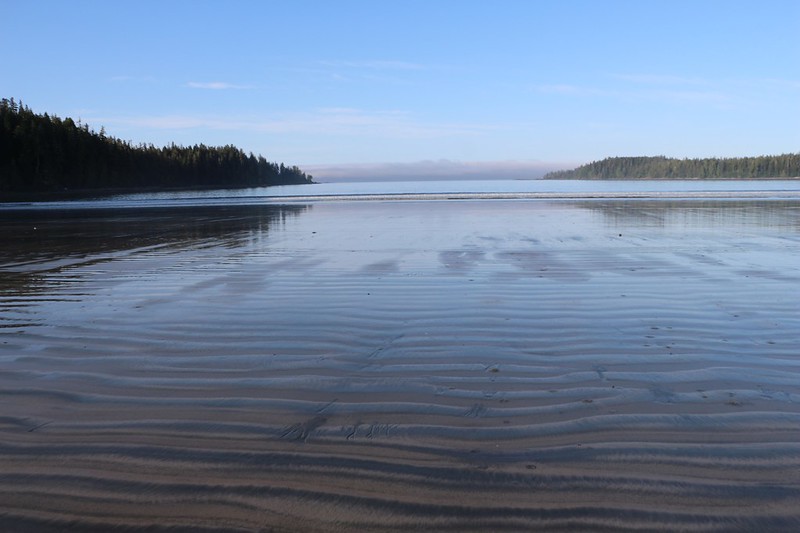 We made it to Clonard Creek and took off our packs.  We were in no rush, so why not take a break?  We checked out the tidepools, which had lots of sea anemones and starfish.  We also met a local First Nations family that was busy harvesting food from the rocky shore. 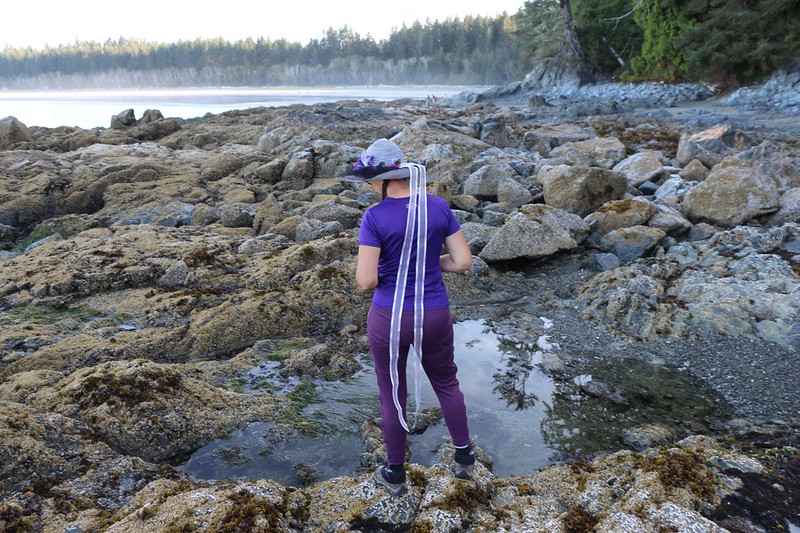 After that, it was time to hike in the forest for the next 9 km.  According to the map, there were impassable headlands along the shore, and no way to hike along the beach.  And the forest turned out to be quite beautiful, with tall pines and luxuriant undergrowth.  There was no shortage of muddy sections (this is a rainforest, after all), and there were lots of bridges to cross and ladders to climb along the way.  We discovered a variety of wooden walkways which allowed us to avoid the mud.  Some were fallen logs with flattened tops that had been incorporated into the trail, while others were sawn planks laid down lengthwise.  The tops of the planks were often roughened with chainsaw cuts to prevent them from becoming too slippery.  There were also plenty of well-constructed walkways made from milled lumber.  Some of those were new, and others were gradually decaying into the mud.  But most of the time it was simply a trail through a peaceful forest.  We hiked along with a growing sense of wonder. 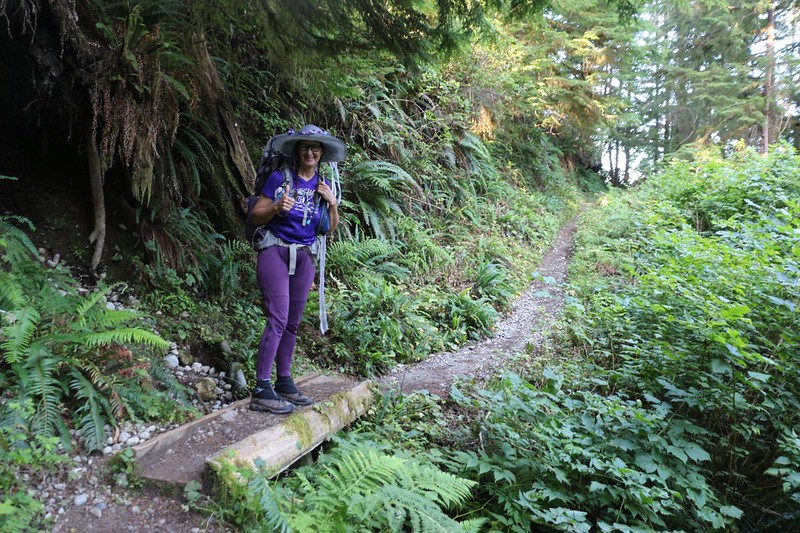 Vicki is a Happy Hiker in the rain forest 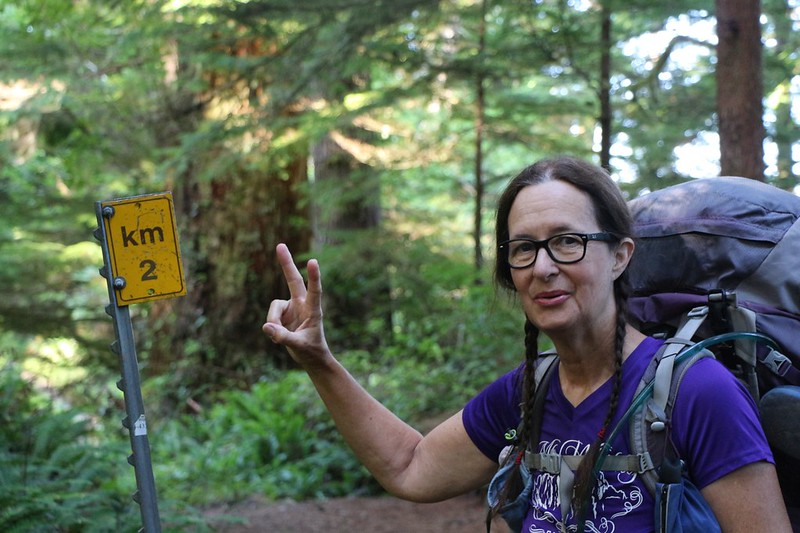 Vicki at the 2 km marker – only 73 more to go! These signs were present in the forest, but not on the beach. 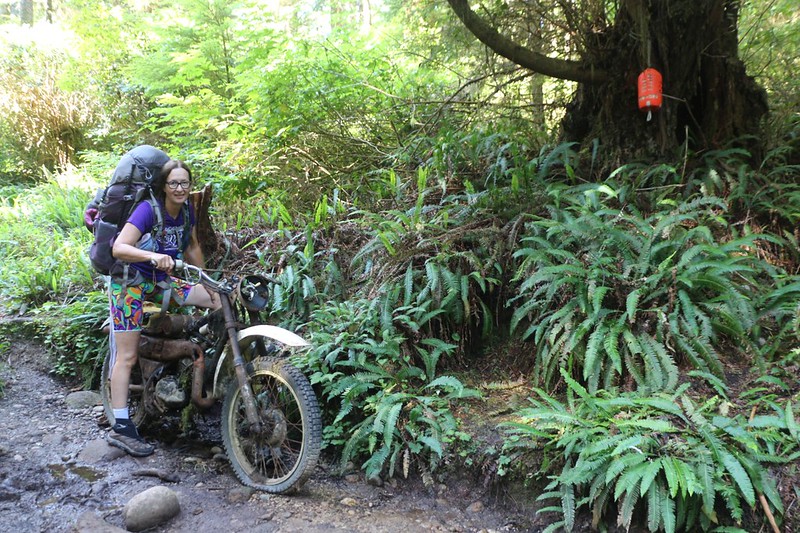 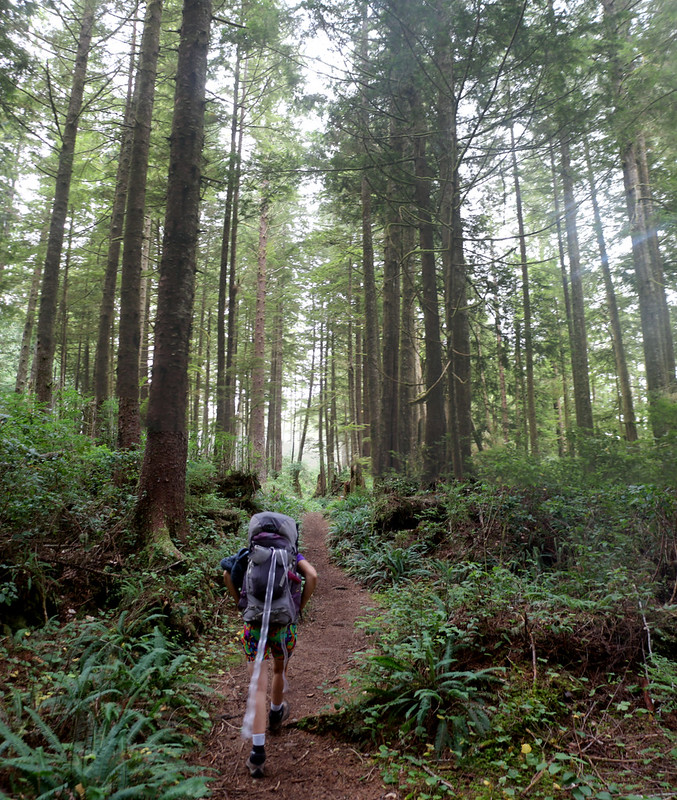 Tall trees and a soft trail through the misty forest 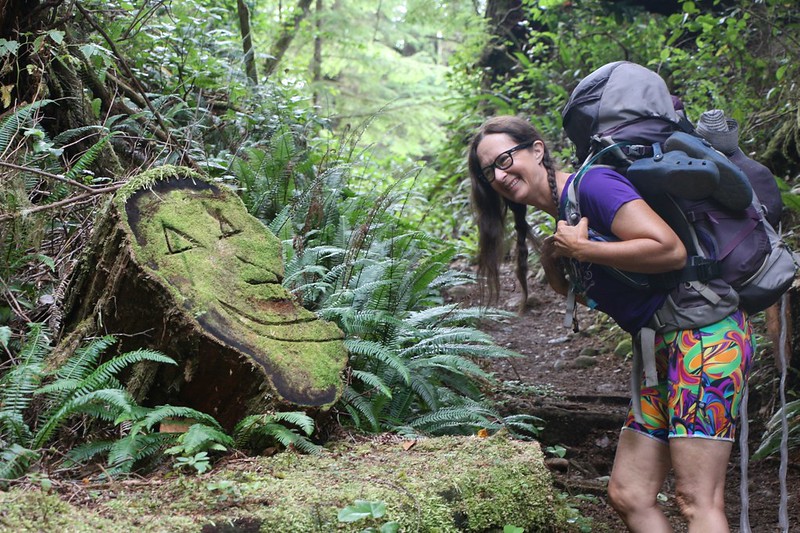 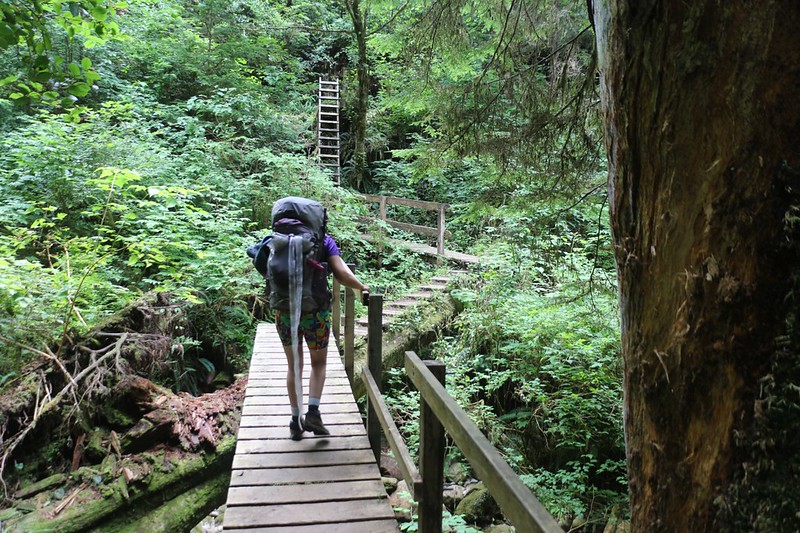 Panorama video of an open, quiet section of pine forest 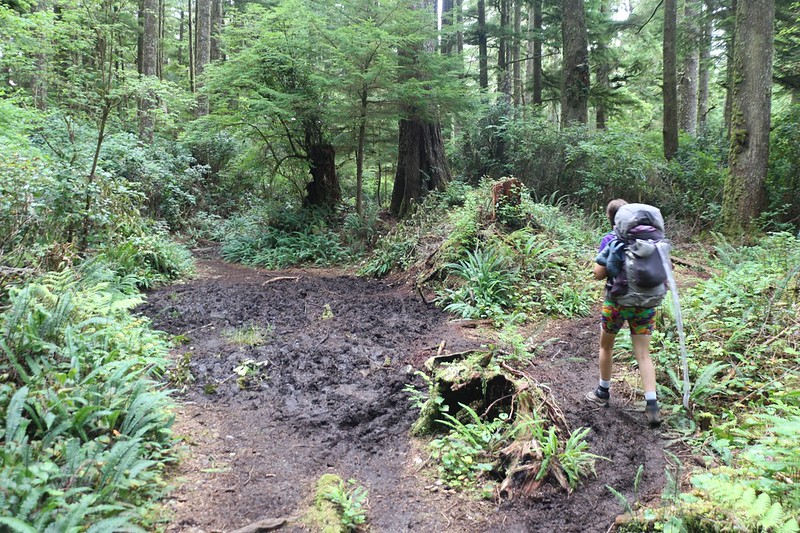 Yet another wide patch of squishy mud on the trail – and this was during the driest time of year!

We hiked all morning through the forest, and rarely got a view out over the water.  The trees and undergrowth were simply too thick to allow easy travel.  But we could hear the waves crashing, and seals barking, and see light where the trees suddenly ended.  There were high bluffs along this section of coast, as we discovered when we found a rare path off to the right side of the trail.

Eventually we came to a large, well-developed side-trail that led us to Sea Lion Rock.  There was a great view from up there.  We were perched high above the water, and there was a deep channel below us with waves surging back and forth inside it.  There was a humpback whale in the distance offshore, breaching over and over again.  Down below were the sea lions, with a huge male dominating his perch on the high rocks.  We put down our packs and broke out the lunch.  It was the perfect time and the perfect place.  This was the reason we came out on this hike! 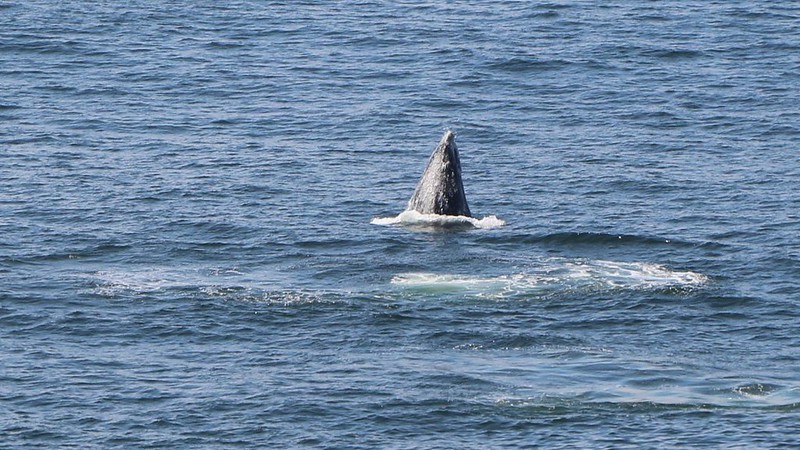 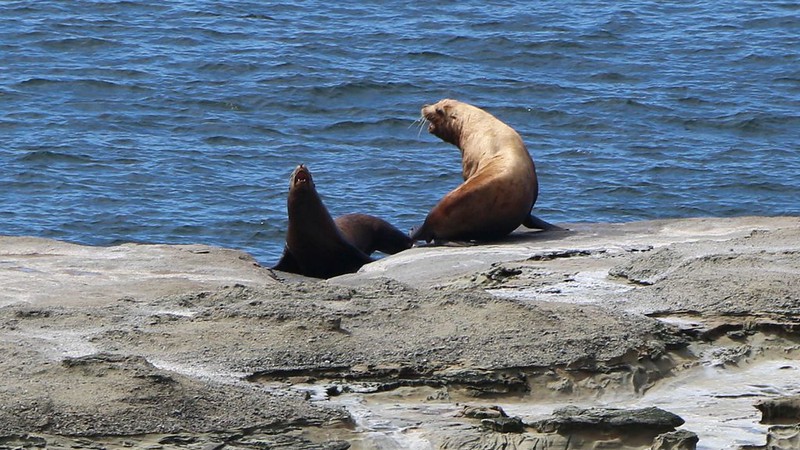 The Papa Sea Lion growled back at the young challenger 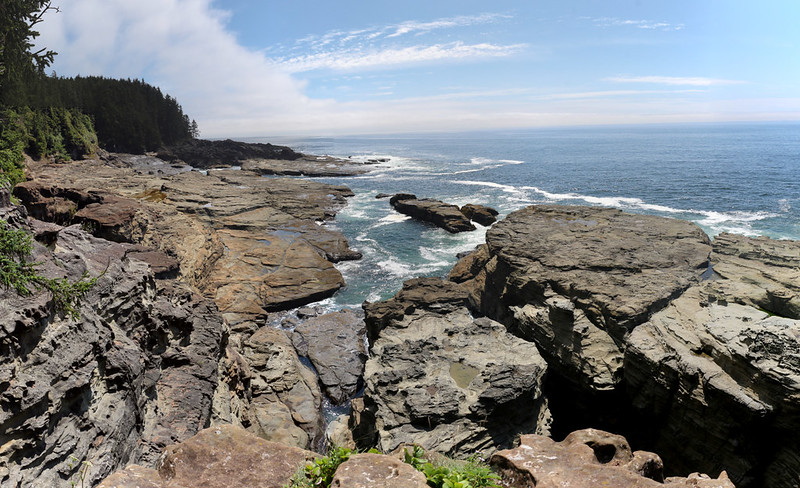 Eventually, of course, we had to saddle back up and hike onward.  Back into the jungle once more.  But it didn’t last long, as there was another side path with a gate that led to the Pachena Point Lighthouse.  In contrast to the unruly rain forest, the lighthouse grounds were impeccably maintained, with manicured lawns, a well-ordered garden, and the paint on the old wooden buildings was in excellent condition.  If you knew what to look for, the original Fresnel Lens was still present up in the old lighthouse, which was now an historical monument.  The modern electric light and foghorn was mounted on a nearby steel frame.  There were electrical generators and large tanks of diesel fuel to keep the new light operational year round. 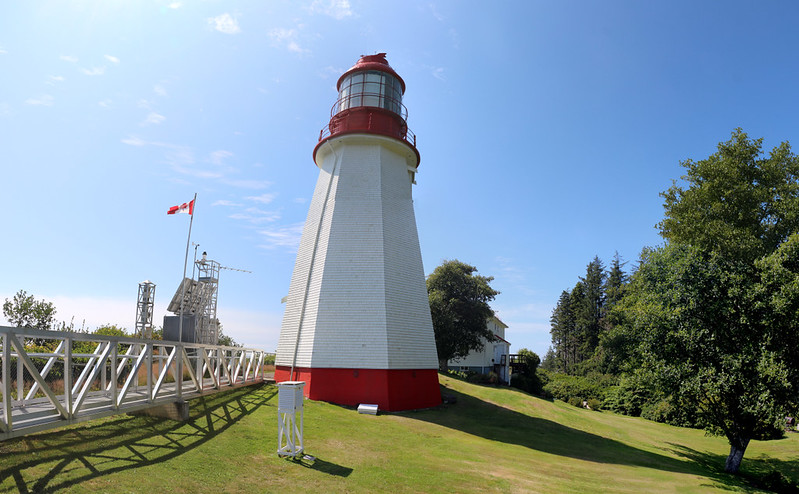 Pachena Point Lighthouse. The new light is on the left near the Canadian Flag

After another kilometer or so of hiking, the trail began descending, and we soon arrived at Michigan Creek.  This was at the 10km mark, and there were several groups already camped there for the night.  Most of the people who start their hike in the afternoon, after the 2pm orientation, end up camping in this location, as do some of the northbound folks who stay here for their final night on the trail.  And it was a very nice campsite, right on the beach, of course.  We took yet another break here, and checked out a mama and baby whale frolicking just offshore in a kelp bed.  It was a beautiful sunny afternoon, so we got out some snacks and enjoyed the show. 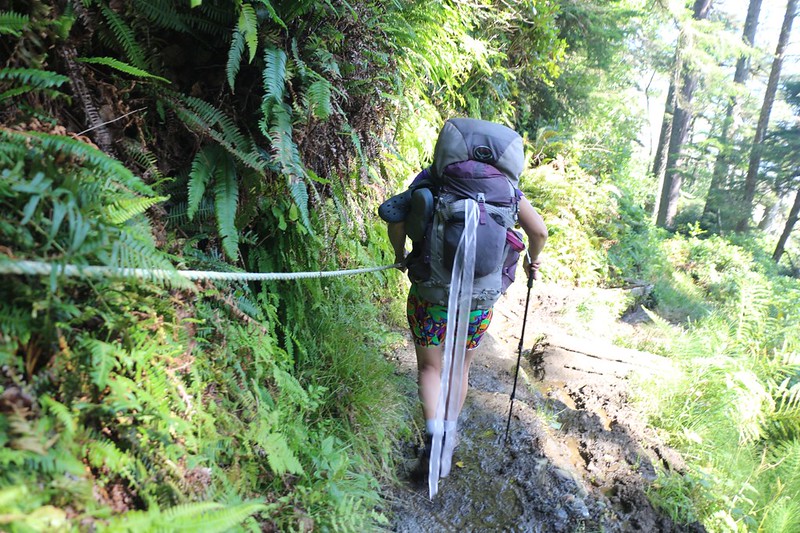 As the trail descended toward Michigan Creek, it got steep and muddy and a guide rope was needed

Fireplace and driftwood benches at the Michigan Creek Campground 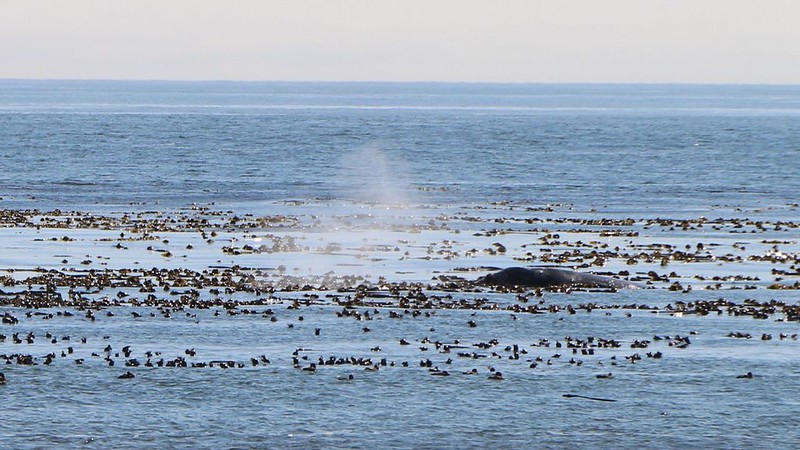 Even though we started early in the morning, we still had a bit more hiking to do.  Our plan was to hike an additional two kilometers to the Darling River campsite.  It supposedly had a waterfall, and might even be less crowded.

So on we hiked, this time along the beach.  There were plenty of tidepools, with tiny crabs and teeny snails.  And there were expanses of flat rocks, covered with seawater puddles and slimy seaweed.  The beach in this section was made of soft gravel, so it was a slog to hike on.  We kept to the dry rock whenever possible. 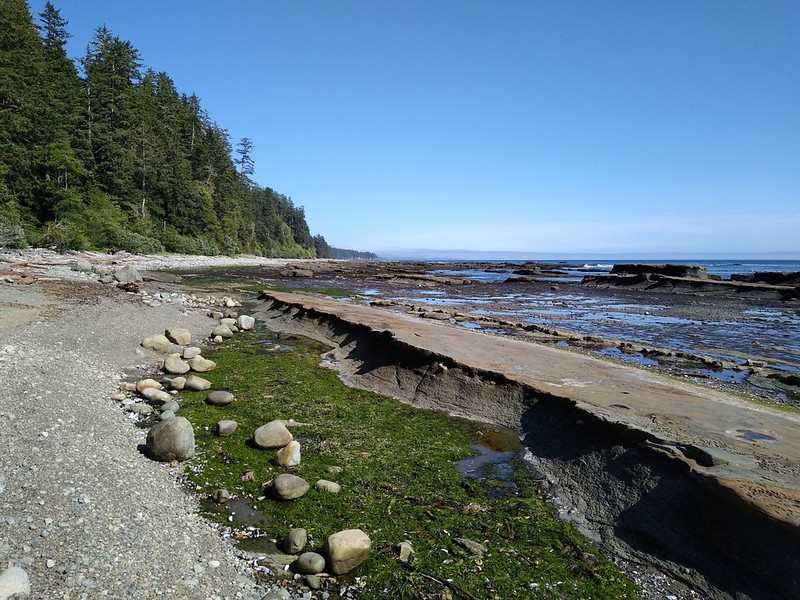 Along the way, we met up with two different bears!  They weren’t very big, maybe a year old or so, but they weren’t frightened of us either, and they absolutely commanded the beach where they were foraging.  Since they refused to move, Vicki and I had no choice but to head out onto the slimy rocks and walk around them.  They were about a quarter mile apart, but we had the feeling that they were siblings.  We also hoped that their mother was very far away. 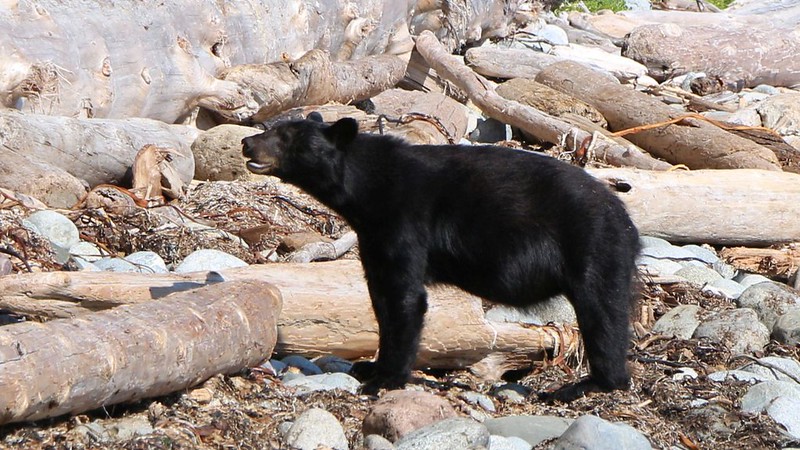 We met two yearling bears on the beach south of Michigan Creek, and we had to walk out on the rocks to get by 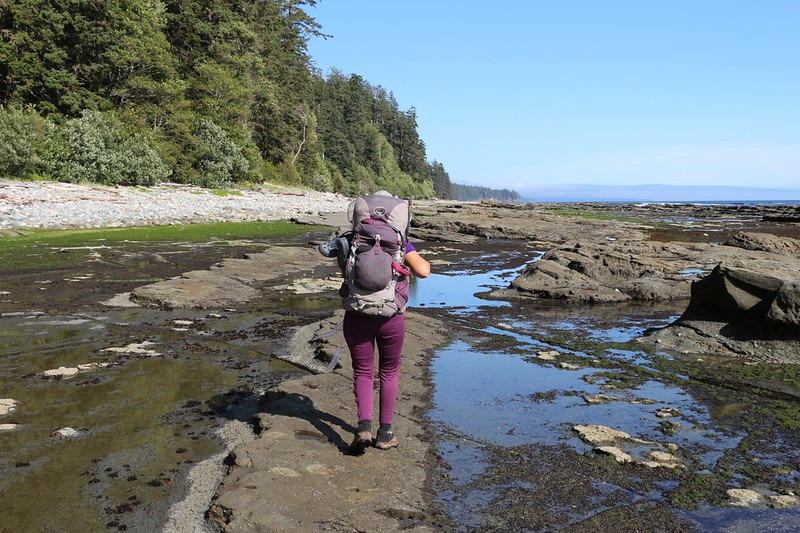 Panorama video of a sunny afternoon on the beach 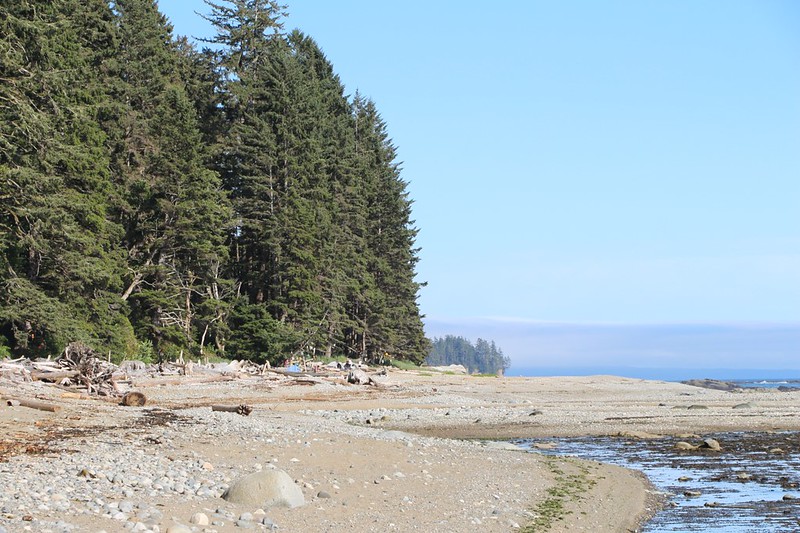 We eventually made it to the campground and waded across the river using our water shoes.  We found an open camping spot up above the high tide line.  There were big driftwood logs up there that had been left behind by Winter storms, and there were soft sandy spots in between them that were suitable for pitching our tent.  We set up camp and grabbed our water filter, and headed up the Darling River to collect some drinking water.  We also checked out the waterfall, which was pretty enough, but the best view of it was from the other side of the river, and we didn’t feel like crossing it again.

Panorama shot from our campsite at Darling River 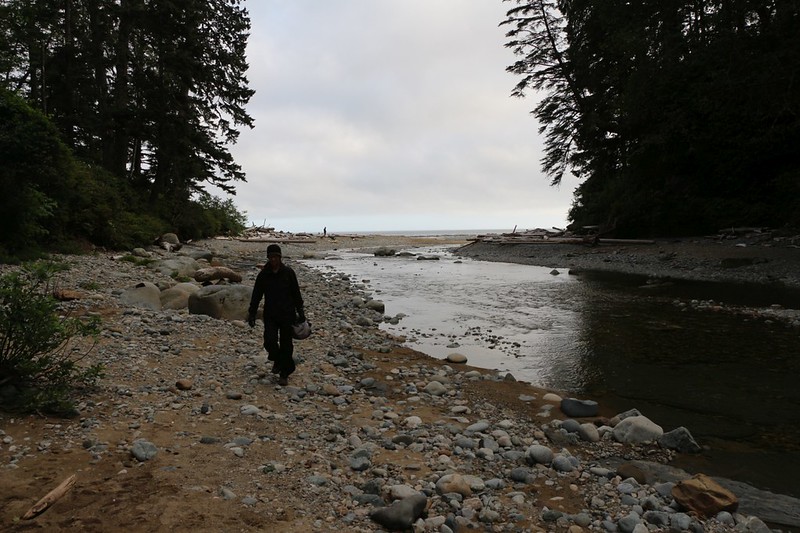 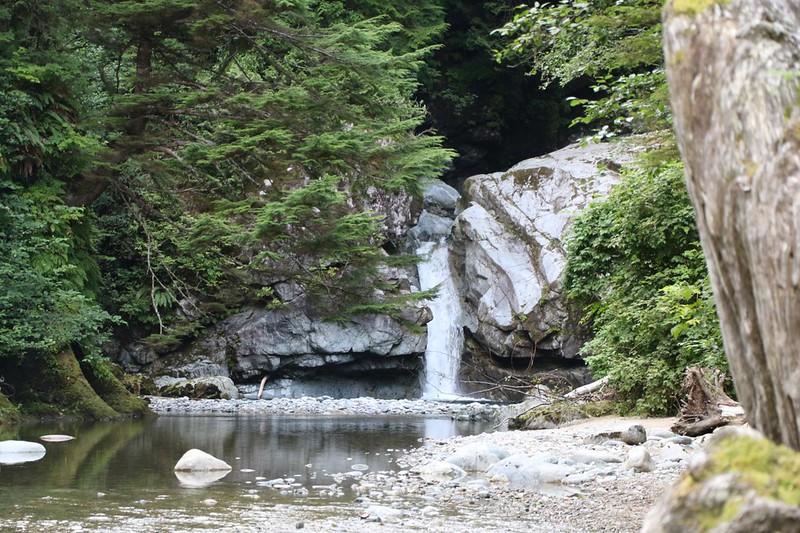 We returned to camp and ate our dinner while we watched yet another whale hanging out in the kelp beds just offshore.  The campground got more crowded as evening approached, and soon we had a lot more neighbors.  But they were all very nice (this is Canada, after all) so no worries.  We were concerned that we might not get a good night’s sleep with a bunch of noisy people so close, but it didn’t matter in the end, as the small waves breaking on the nearby beach made just enough noise to mask the sounds.  Perfect. 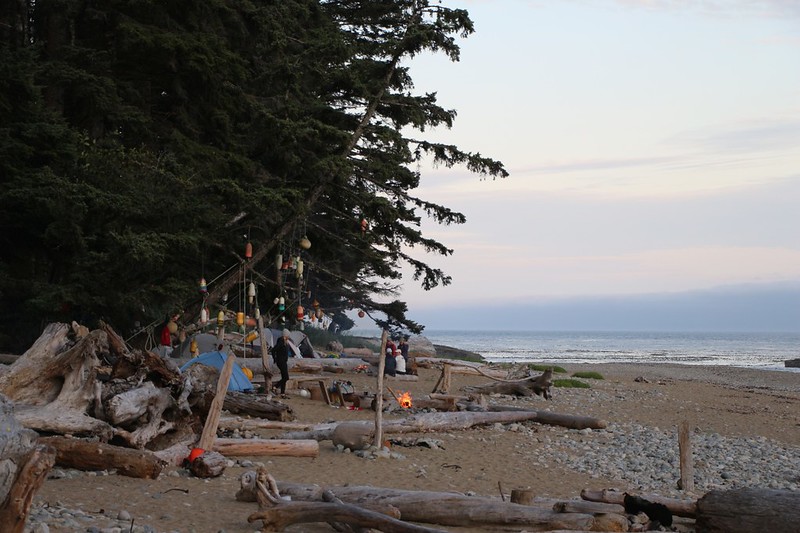 Campfires and tents on the Beach at the Darling River Campground 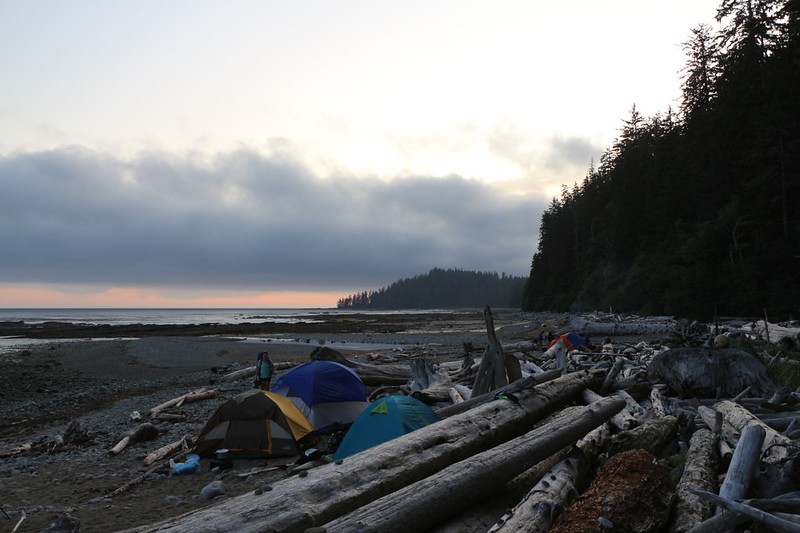 We hung out and watched the sunset, and checked out the driftwood-fueled campfires that our neighbors were having.  Vicki and I have been camping in fire-fearful California for so long that we didn’t even think about having one.  So we enjoyed the other people’s fires from a distance.  It was all good, and so far the West Coast Trail was living up to its reputation as an awesome experience for any backpacker.  Good times!