The bus driver checked our names against his list, then loaded our gear into the back.  Luckily for us, there were several stops along the way, where we could get out to purchase food and stretch our legs.  The bus also serviced the Juan de Fuca Trail.  A number of hikers got out to begin their trek at the southern terminus of the WCT in Port Renfrew, but another crowd filled the bus again.  These were people who had already hiked the trail and were returning to their cars in the town of Bamfield.  We struck up conversations with several of them, and found out about current trail conditions.  Some of the folks were still stinky from a week of hiking, but others had spent the night at the campground and had showered the night before.

It was a long road from Port Renfrew to Bamfield, and about a four hour drive.  The first section was paved, but after Lake Cowichan the road left the pavement for good.  We drove through the forest on bumpy rutted logging roads, and the bus was very loud inside.  Vicki wished that she’d brought a pair of earplugs. 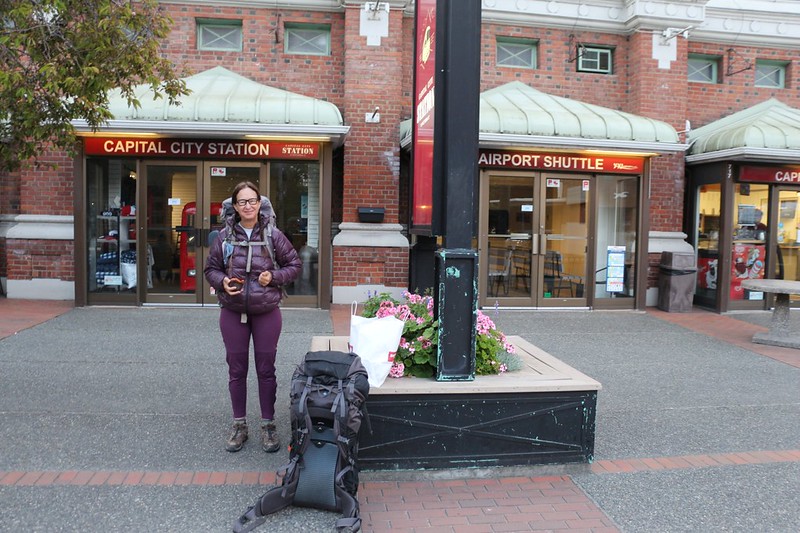 Vicki with our backpacks at the West Coast Trail Express bus stop in downtown Victoria, BC Canada

Video of the noisy, bumpy, 8-hour ride on the dirt roads of Vancouver Island 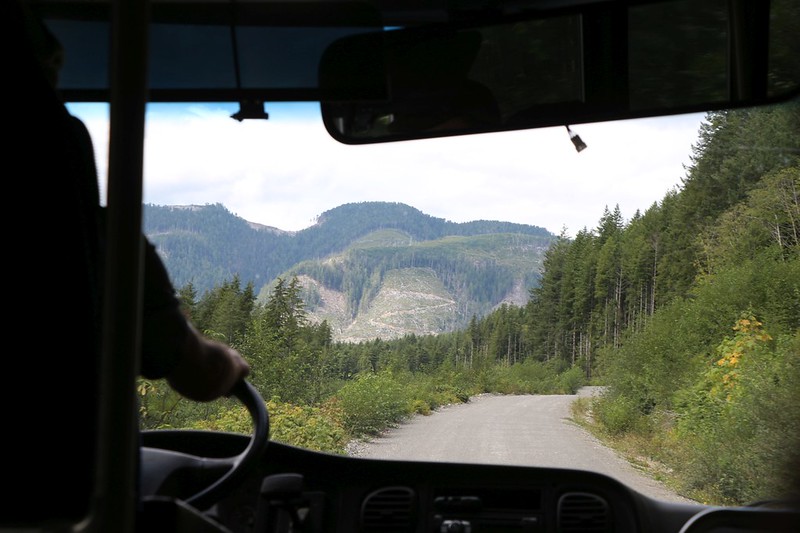 View from the bus; lots of logging going on in the backwoods

We left the bus at the Pachena Bay Trailhead, right next to the ranger station.  The bus ran late, but the driver said that it always ran late.  Still, we arrived in time for the afternoon trail orientation, and that’s what mattered.  We learned about the park’s rules, about the recent bear sightings, and about the tides.  They handed us a tide chart, but I already had a better one with the full tidal curves plotted, so we didn’t really need it.  They had a scale out front to weigh your packs.  Mine was 46 pounds and Vicki’s was 24 pounds.  I admit that I was a bit jealous.  After the orientation we were issued our official hiking permits.  Ours were for the following day, but there were some folks ready to hike right away  to the first campsite, 12km away.  And they did.  We were glad that we had scheduled an extra night. 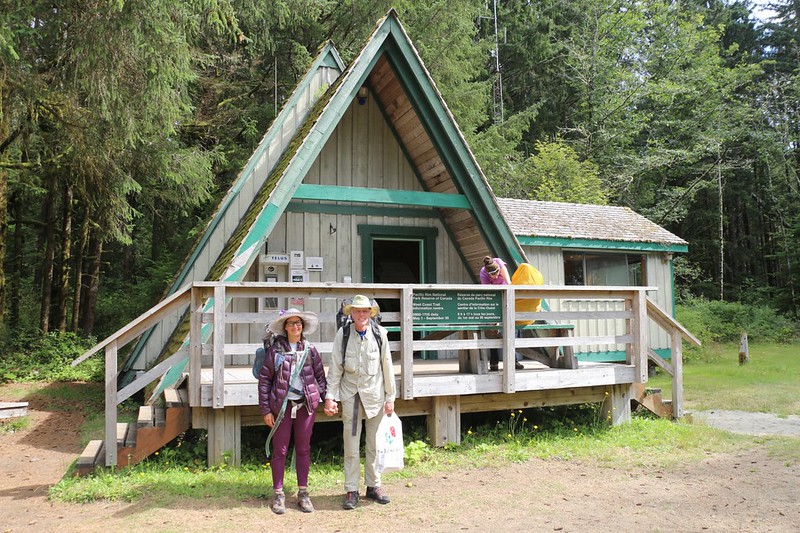 Vicki and I posing at the Pachena Bay Ranger Station

Our plan was to camp at the local campground on Pachena Bay this first night, so we could take our time and fully enjoy the trail tomorrow.  We hiked down to the campground office and got our reservation for one of the big, semi-permanent platform tents, then headed back to our first night’s “glamping.” 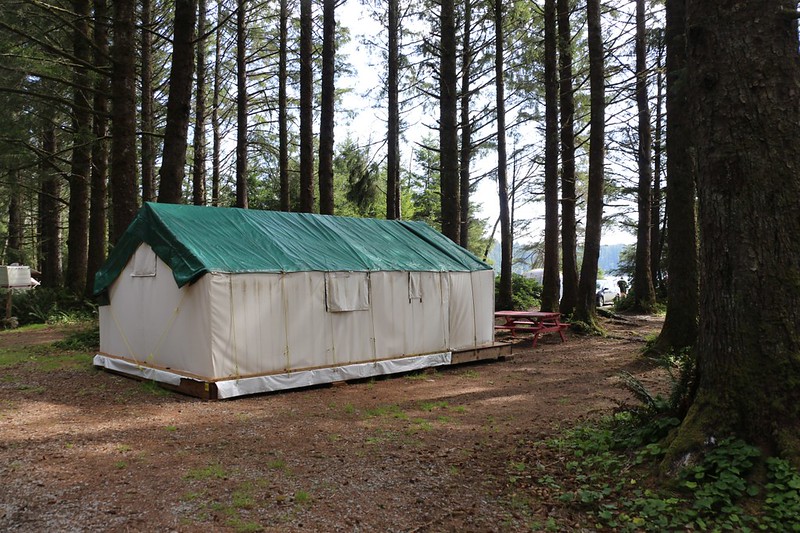 We spent the extra bucks on a platform tent at the Pachena Campground, so we didn’t have to unpack ours 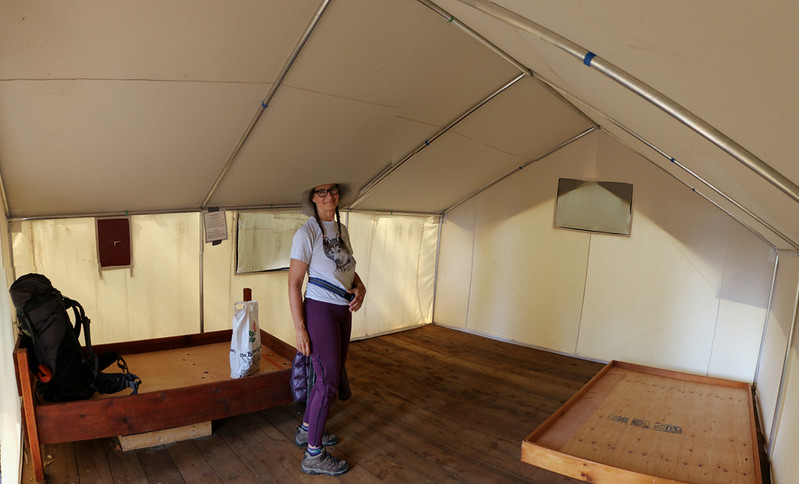 We put our gear inside the tent but didn’t stay long.  After that long bus ride, we wanted to stretch our legs a bit.  So we headed back to the Ranger Station and started hiking on the trail itself.  I’d seen online that it started with a very short distance of forest hiking until a big wooden ladder made itself known.  We wanted to see just how annoying those ladders actually were.  We’d read about them in the trail guides and seen photos on the internet.  But climbing them with a full pack might be a surprise.  And down-climbing them might be worse. 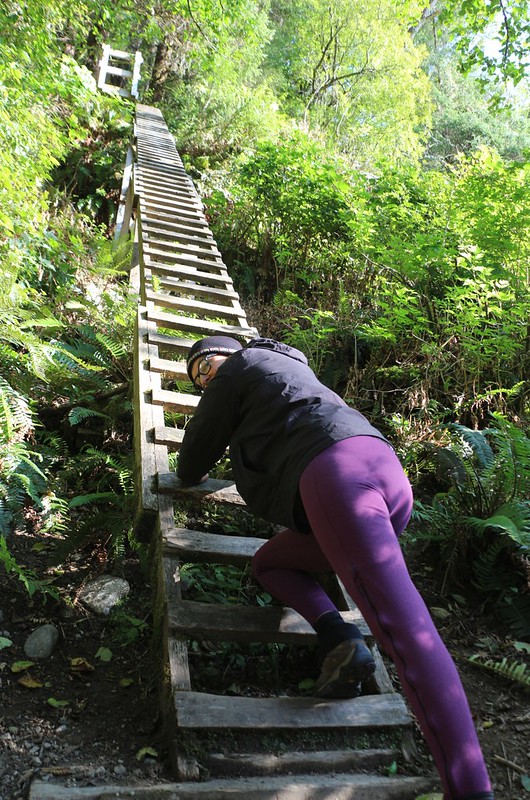 The first ladders were very sturdy but also very tall – hold on tight! 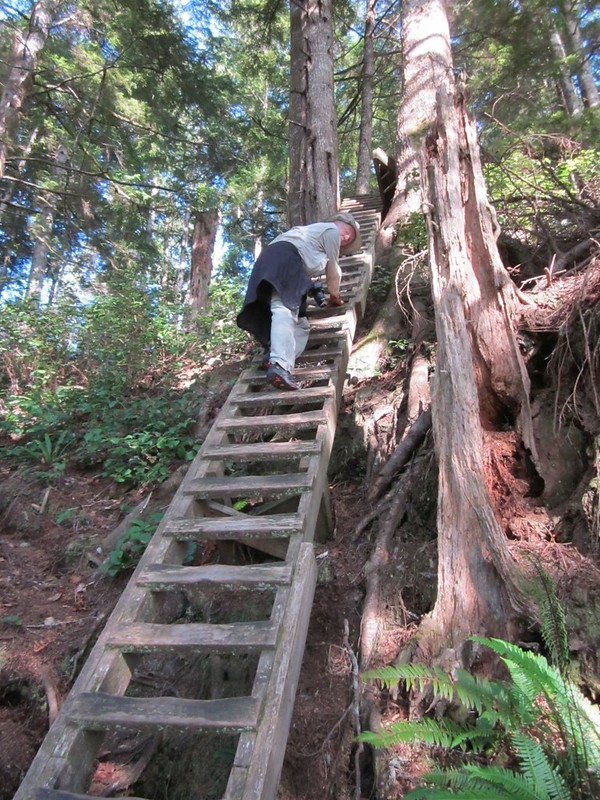 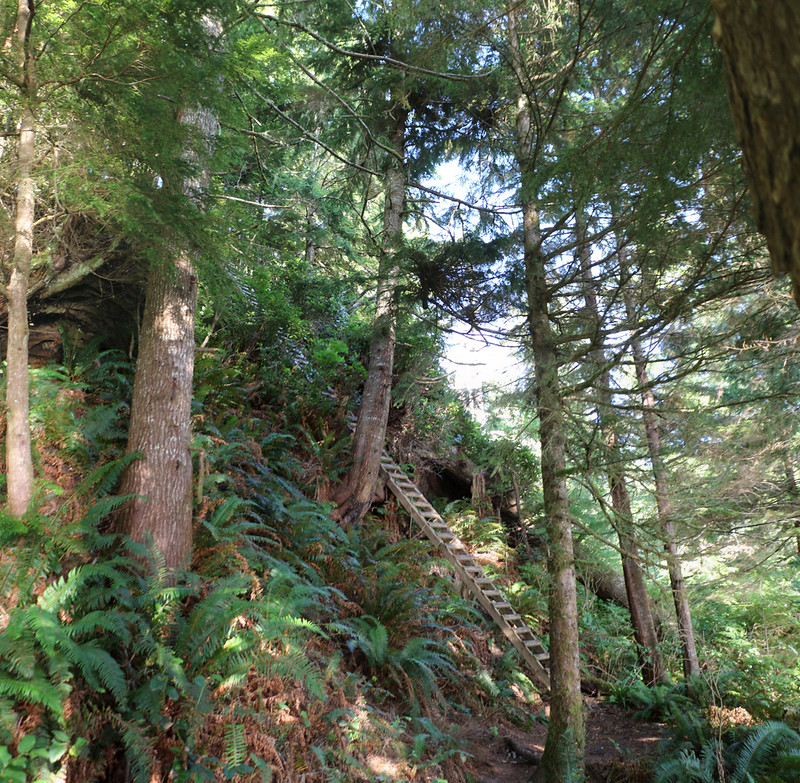 Within a half mile, the trail descended another series of ladders, back to sea level – this became a WCT theme

The tide was below 8 feet, so we could return to camp at Pachena Bay via the Beach Route

We climbed them without our packs this time, and they turned out to be very sturdy, and the steps were spaced correctly so they were fun to climb.  We left the trail at Clonard Creek and headed out to the nearby beach.  The tide was low, so we had no problem hiking back to camp along the shore.  There were tide pools to check out, and it was very quiet and peaceful.  We decided that if the tide was still low tomorrow morning then we’d be sure to avoid all those ladders.  It’s called the West Coast Trail, after all, not the West Forest Trail.  Just the same, we were glad that we’d taken a practice run on the inland route, and we felt much more confident about the next day’s hike.  There were 70 wooden ladders spread out over the 75 kilometers of trail, with 130 bridges and 4 hand-pulled cable cars (over wide rivers), so there was plenty more excitement in store for us during the next week.

We hiked back to camp and Vicki cooked some dinner while I got the air mattresses blown up.  Then we headed out to the beach to eat.  We sat on some huge driftwood logs and watched the kids playing on the beach.  There were small waves breaking on the sandy shore of the bay.  We walked along the water and enjoyed the sunset clouds.  The sun sets rather late in the Summer up in Canada, and we went to bed soon after.  It had been a very long day.