We woke up late that morning at Randall Creek.  We only had three and a half miles to hike that day, so why rush?  It looked like it was going to be yet another hot and sunny day, although it was cool enough that morning.  Vicki cooked up some freeze dried food while I packed up the sleeping gear, and soon enough we were hanging out on the driftwood log eating breakfast with our neighbors.  They had a solid eight mile day ahead of them, but weren’t any faster waking up than we were.  Why rush?  The days are long in June, and we were all on vacation.

Interestingly, the breeze hadn’t dropped much overnight like it usually does, and packing up the tents was, well, interesting.  It took at least two people per tent, and you had to weigh everything down with rocks if you wanted it to stay put.  There were some humorous moments, for sure. 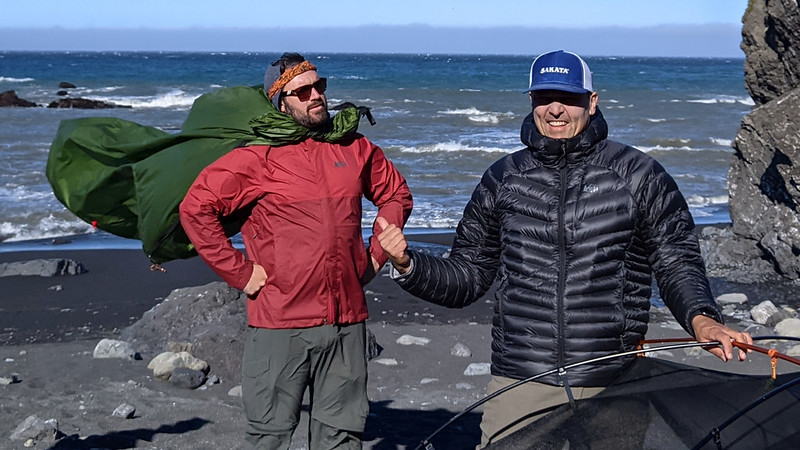 Just the same, Vicki and I managed to get packed a bit faster.  We hiked out along the beach, saying a temporary goodbye to The Mermen.  We knew that they would be hiking faster than us.  Everybody hikes faster than us. 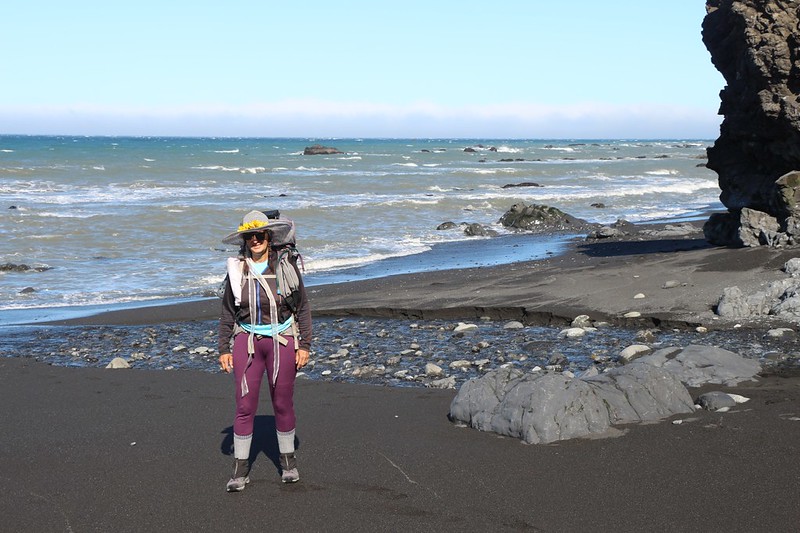 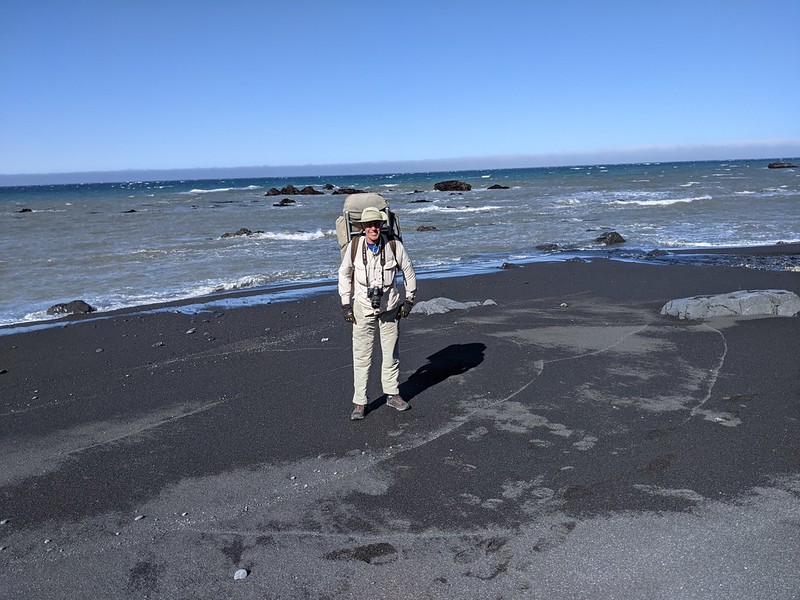 Me, at Randall Creek, as we began our day’s journey – it was breezy, as you can see from all the whitecaps out to sea

So we started ambling along the beach in our usual fashion, stopping to check things out whenever we felt like it.  We were happy that the beach wasn’t made out of boulders this time, although the gravel sections got slow at times.  There was interesting sea life in the rocks along the shore.  Easy hiking. 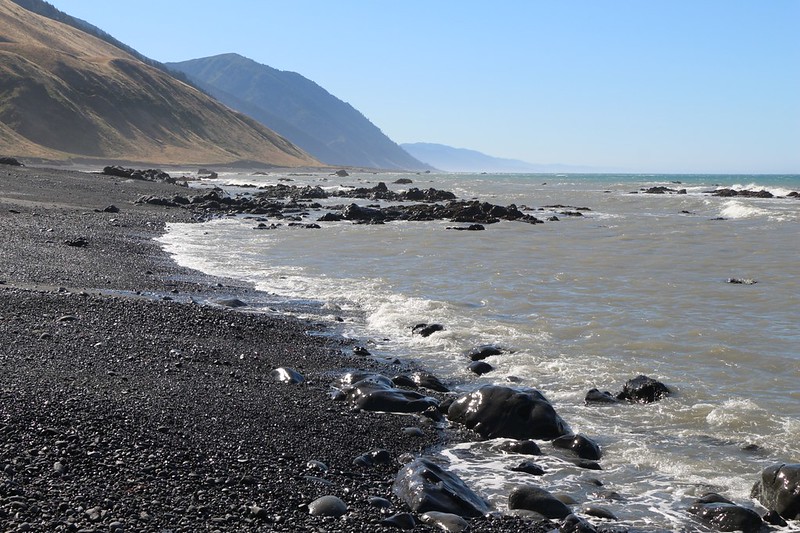 We tried to walk near the low-tide line, for firmer footing, but the stones on the beach often slumped under our feet

The next section of interest was called Spanish Flat.  There was a section of inland trail up there, but we decided to stay on the beach as long as the sand was firm.  But it wasn’t all that consistent.  We stopped for a quick break to dump sand out of our shoes, and when I looked up, there were The Mermen overtaking us on the inland trail.  They were hiking the fast way.  I climbed up on the bluff to the trail and said goodbye in person.  It had really been a pleasure to meet them all. 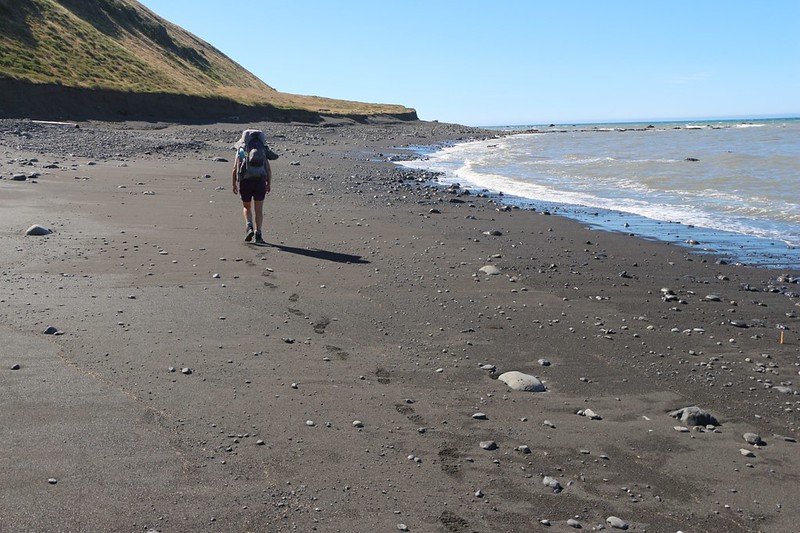 Spanish Flat was just ahead of us, but the footing was fine on the beach so we stayed near the water 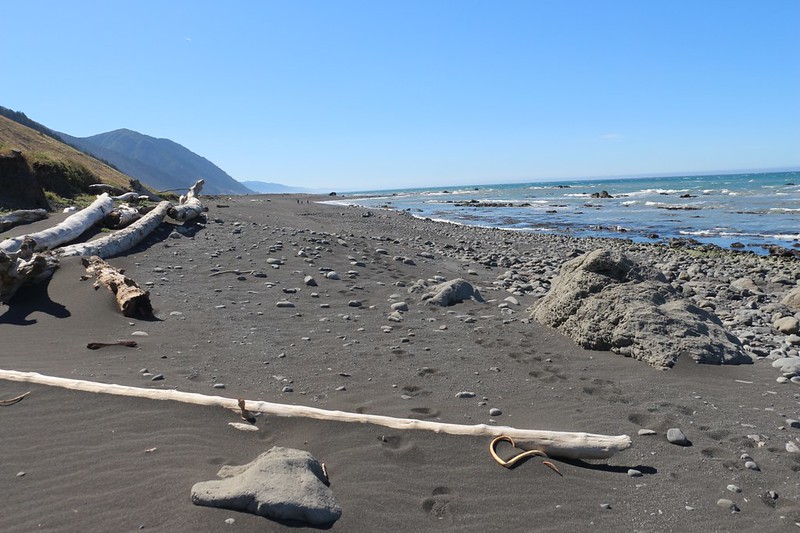 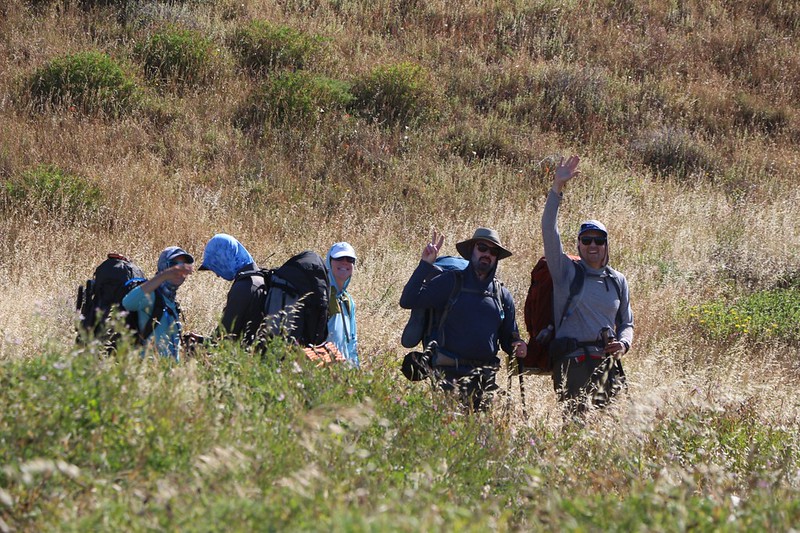 After that, Vicki and I decided to try the inland trail.  And, yes, I can report with certainty that Spanish Flat is very flat.  But with the weather that day, it was also hot, dry, and extremely non-beachlike.  The year 2021 had started with an exceptionally dry Winter, and all the grasses had already turned brown and gone to seed.  We would have enjoyed it more if it had been green and full of flowers, but not this year. 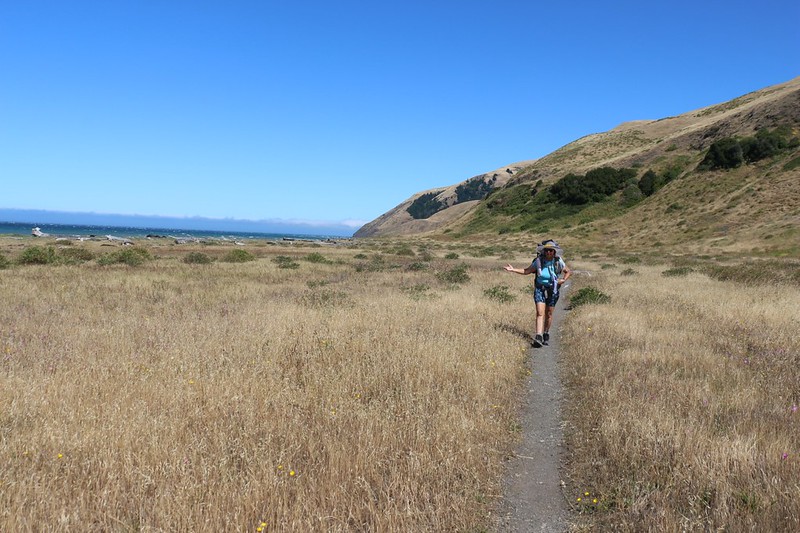 Panorama video of the grassy plain on Spanish Flat 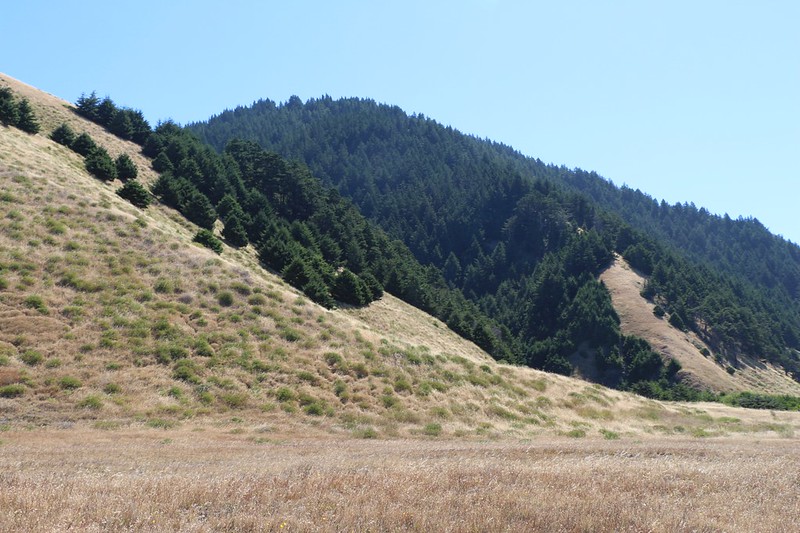 We headed back to the beach after crossing Spanish Creek, and continued on past another lonely cabin on private property.  Nice place, but if it weren’t for all the backpackers on the Lost Coast Trail, it would be very lonely living there.  It was also directly between Spanish and Oat Creeks, so I wondered how they got their water.  Maybe they piped it in from the creeks, or carried it in, or maybe there was a spring up above them. 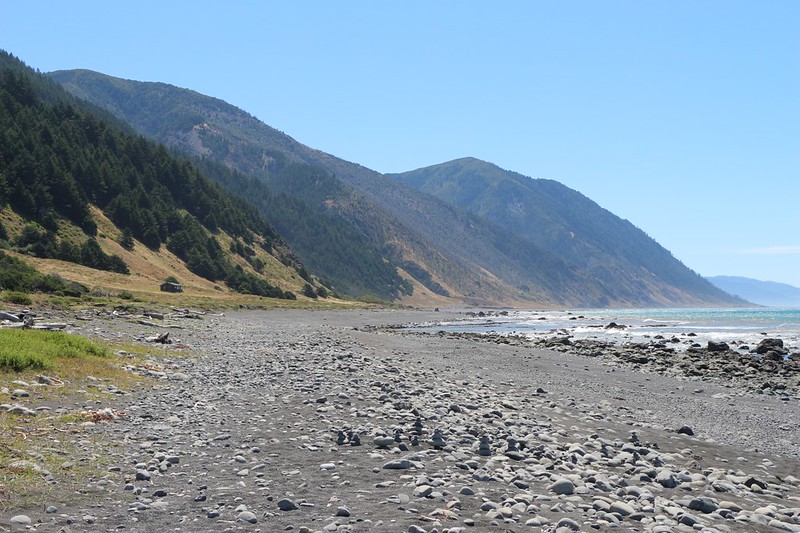 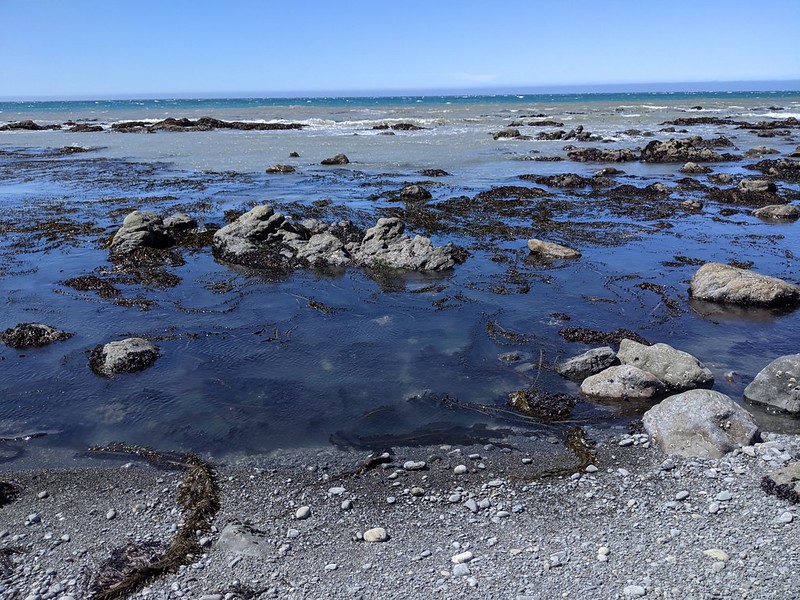 At low tide the shoreline rocks were exposed, showing seaweed tendrils and tidepools 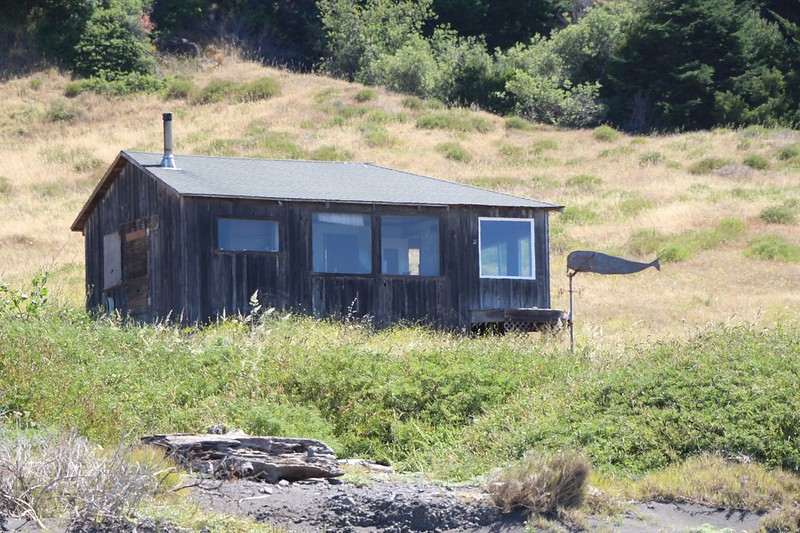 We came upon a private cabin near Oat Creek, with a cool-looking metal Whale-shaped wind vane

We stopped by Oat Creek and marveled that the stream wasn’t crossing the beach.  Instead, it was leaching directly through the sand.  The waves must have piled up the rocks like a sandbar across the mouth of the stream, but they were much too porous and the water continued flowing anyway.  Pretty cool. 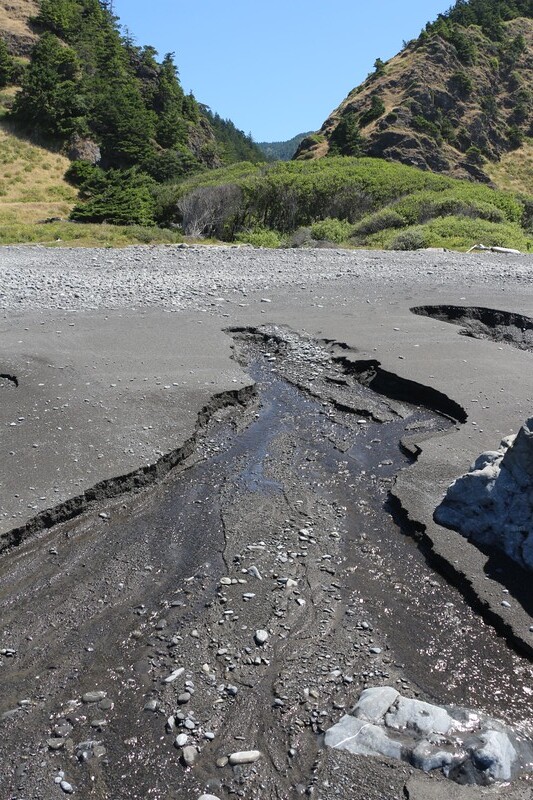 Oat Creek didn’t cross the sandy beach – it flowed directly through it! 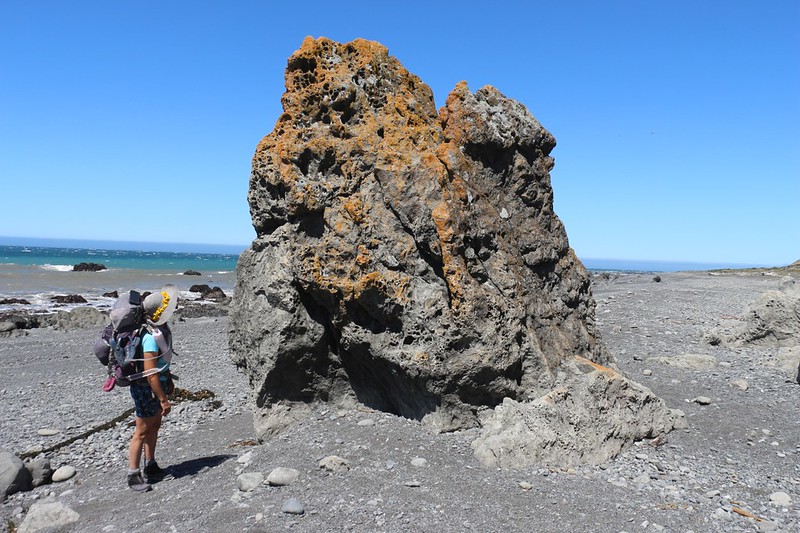 A large rock with orange lichen stood tall on the beach – it was a great wind break! We stopped here for a snack

After eating some snack in the lee of a big rock, we continued on.  Just ahead, there was a large rusted boiler from a shipwreck embedded in the sand.  It was built with rivets, just like the skyscrapers of old, not with modern welding methods.  We also met several northbound hikers.  Two of them were backpacking with short surfboards attached to their packs!  They were young guys, and strong, so heading directly into the wind was simply a fact of life, not something to complain about.  And, once again, we met up with some lazy seals, lying in the sun on the rocks just offshore.  They looked at us, mildly curious, but we seemed harmless enough.  They were right. 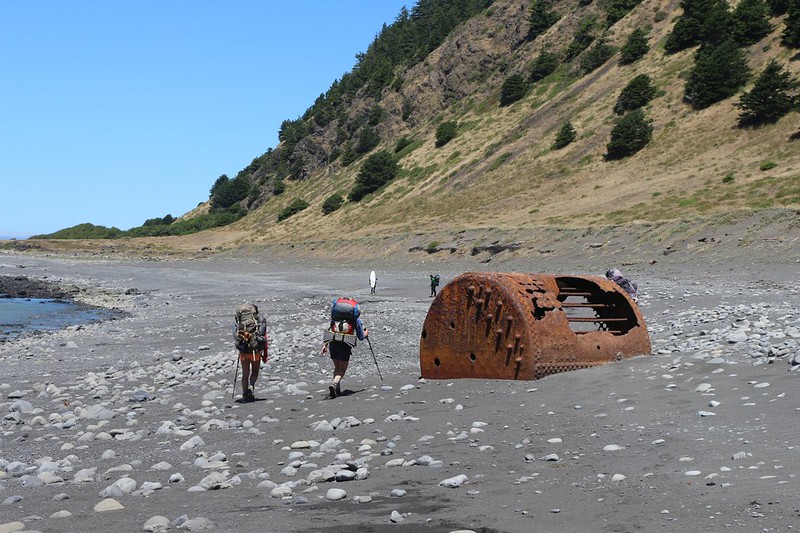 We met other hikers heading north, directly into the wind, near a big rusted boiler from an old shipwreck 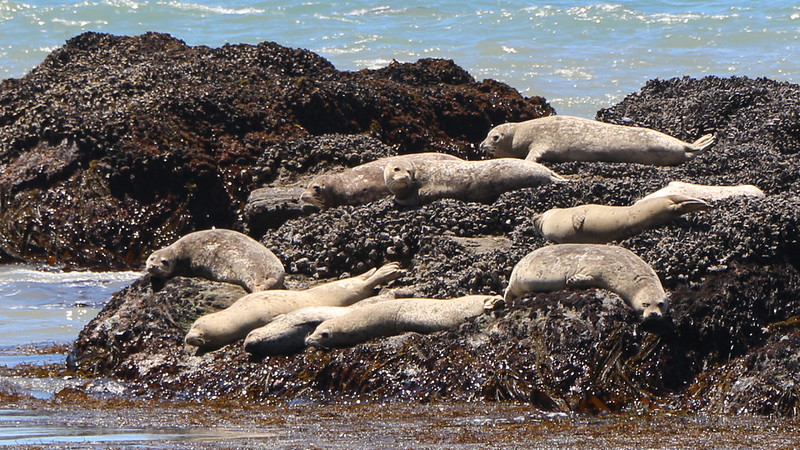 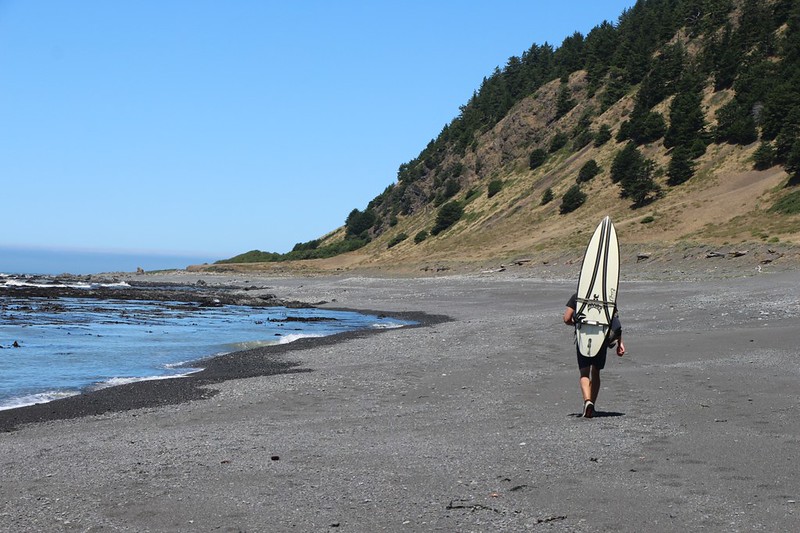 There was no shortage of dead sea creatures washed up on the beach.   We saw small crab carapaces, snail shells, mussel shells, sea urchins, and even starfish.  Plus the usual kelp and sea grasses, of course.  We paused to check out everything and anything.  We wondered why anyone bothered hiking the boring inland trail with all this abundance along the shore. 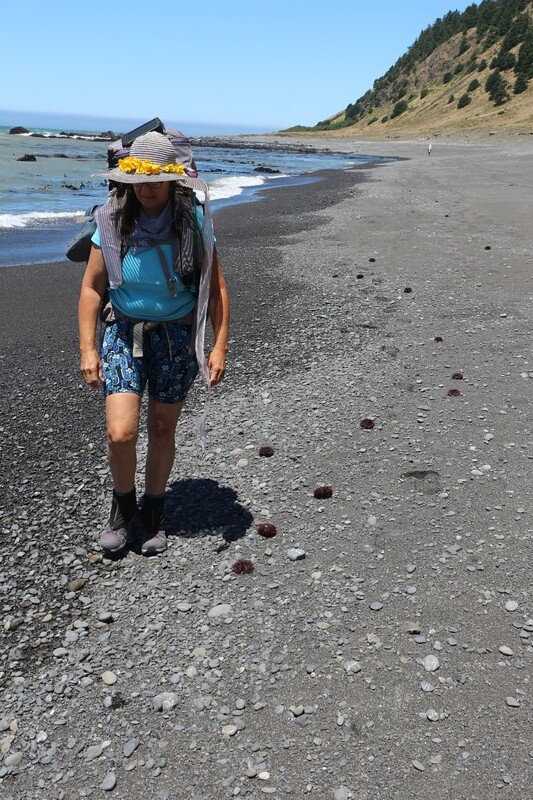 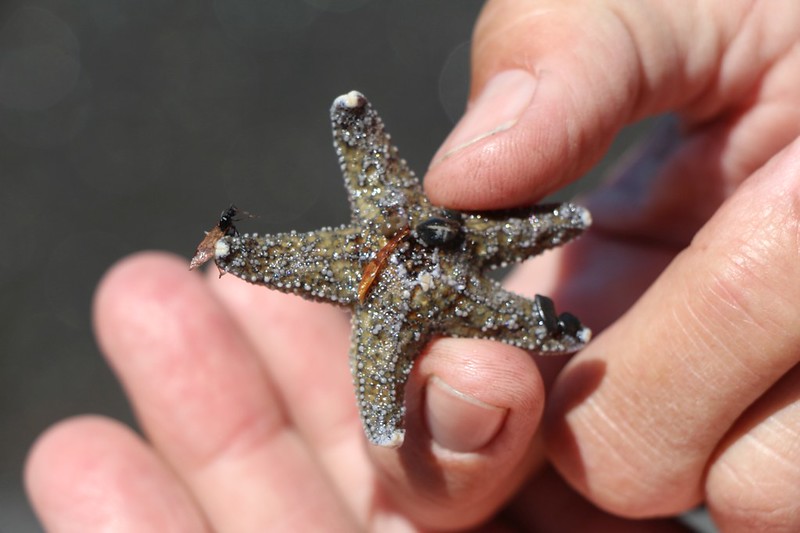 Vicki found a tiny starfish washed up on the beach, near Kinsey Creek

It was just a bit after noon when we arrived at Kinsey Creek, our day’s destination.  Three and a half miles in three and a half hours.  Not bad!  For slow hikers like us, that is.  We found a decent spot on the beach up above high tide, just around the corner of the bluff.  Maybe it would be protected from the wind.  Or maybe not.  We hung out there for a while and it mostly seemed OK, with an occasional gust every so often.  But just to be thorough, we took off our packs and left them in the spot (claiming it temporarily) and hiked all around the area, as my phone’s mapping app indicated that there were other campsites nearby.  The inland trail was actually a dirt road, and we followed it south across the creek.  There was a sheltered spot under some bushes, and an exposed spot up on a bluff.  The wind and hot sun were the main issues of the afternoon, but I didn’t want to spend a night under some trees.  I do that in the mountains far too often.  What I wanted was the beach and the surf.  That’s why we were hiking this trail in the first place.  So we ended up in the original spot anyway.  We set up the tent directly on the soft sand, and weighed down the corners with big rocks, in case of wind gusts. 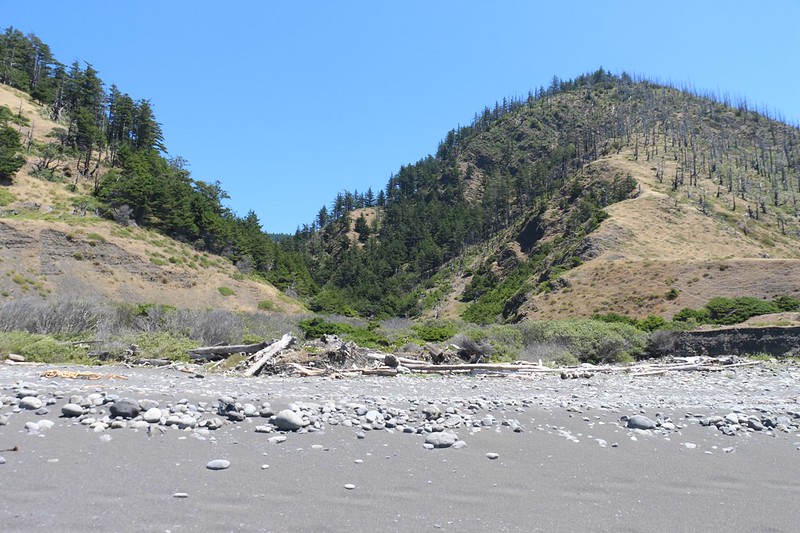 We arrived at our day’s destination, Kinsey Creek, and it was still quite early, as this was a very short day for us

There are campsites up on the flat south of Kinsey Creek, but it was too windy that day for us to camp there 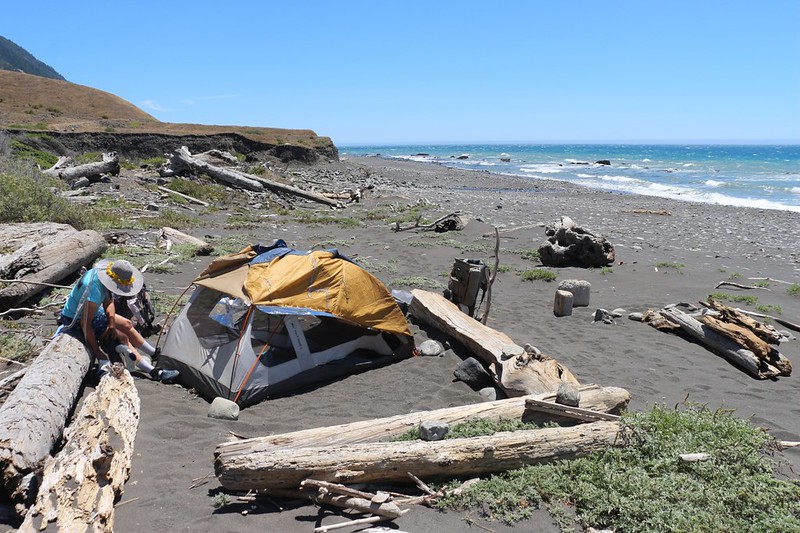 It was a hot day, with gusty winds, so we stayed inside the shady tent and read our books – easy living on the LCT!

We lay down inside the shady tent and enjoyed the afternoon.  It was hot, true, but the breeze helped keep us cool.  Just the same, we got bored, and warmer than we wanted to be, so eventually we headed over to the creek.  We sat down and soaked our feet in the cool fresh water.  Aaaahhh.  Life was good again. 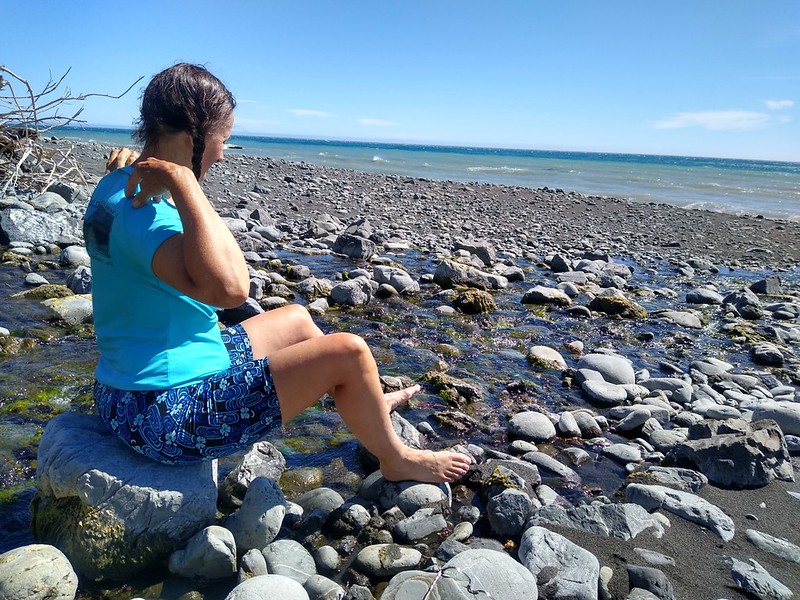 It was very hot, so while we filtered our water from Kinsey Creek, we also cooled off our sweaty feet – Aaahhh! 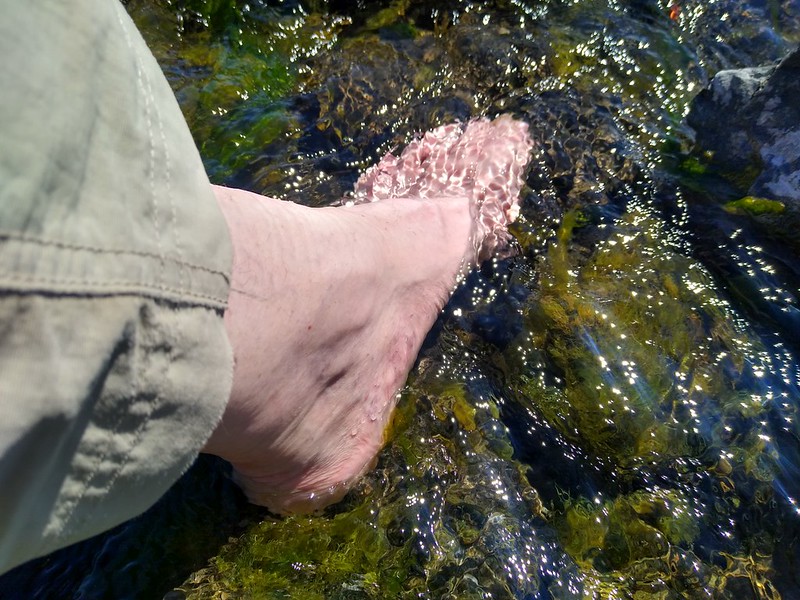 There’s nothing like a cold creek to cure hot, tired feet!

Unfortunately, as the afternoon got later the winds grew stronger.  There was an odd conjunction of windflows that day.  Just offshore, less than a quarter-mile away, the cold northwest wind was blowing strong along the coastline, just like it usually does.  We could see the resultant wind waves and the whitecaps flowing toward the southeast out on the ocean.  (In fact, we chose to hike this trail north to south so that we’d have this ever-present breeze at our backs.)  Meanwhile, the heat wave that was happening inland at that time was blowing offshore, and bringing the hot air along with it.  When these two completely different air masses interacted they did so in a violent and unpredictable manner.  Wild blasts of spray would whip upward along shear lines out over the water, and never in the same exact spot.  Rainbows would appear in the mist due to the angle of the lowering sun, and the surface of the sea was altered and troubled.

It was fascinating to watch.  And, unfortunately, to experience it directly.  This was because the wild wind effects didn’t only happen over the ocean.  Every so often, they occurred over the beach.  And when the winds combined near our campsite, sand grains would be launched into the air instead of spray!  Let me add that these sand grains were quite large, more like tiny pebbles than fine-grained powder.  Needless to say, we got quite adept at closing our eyes when this  wildness happened.  We could hear and feel it coming toward us.  We also quickly realized that we had to close the screens on the tent, or soon we’d be spending the night sleeping on course grains of sand. 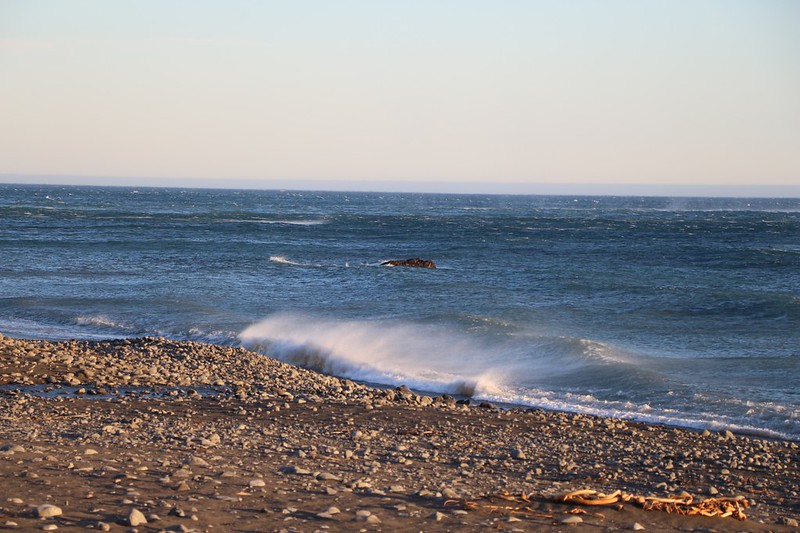 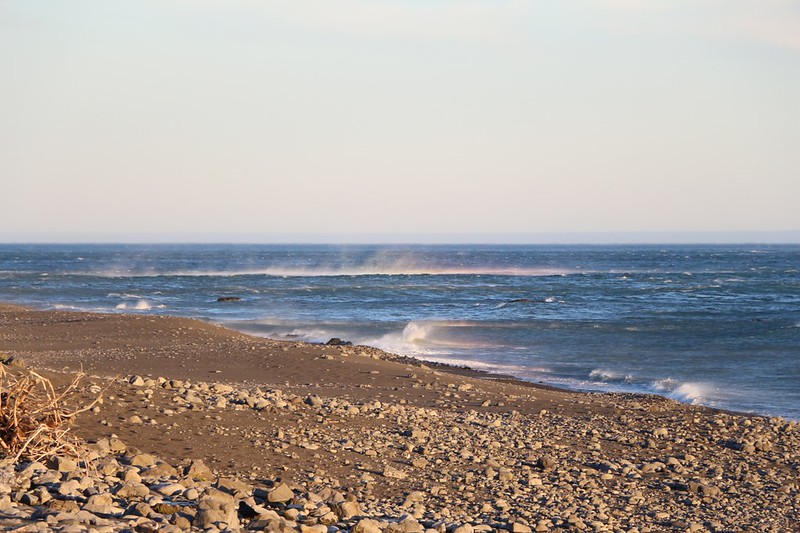 Rainbows in the mist as the offshore gusts met the northwest wind, forming wild displays of spray on the ocean

Eventually, we had to retire into the tent to avoid the blasting sand.  It didn’t happen constantly, maybe once every ten or fifteen minutes, but when the winds conjoined we first heard the whistling sound approaching, then the entire tent was pelted with sand, and the walls bent inward alarmingly as it shook the tent like a whipping flag.

As evening approached the frequency and intensity diminished, but we still had no idea how we were going to light the stove to eat our dinner.  And how would we keep the sand out of it?  We finally came upon the idea of heading for that peaceful campsite we’d found under the trees.  We grabbed what we needed, and when we arrived we found three people camped there,  They had been out on the windy bluff earlier, and were very understanding when we asked to use their campsite to cook.  And that’s how we met some more friendly people on the trail.  Backpackers are almost uniformly nice to each other, and they were no exception.

After that, we headed back to the tent and the windy war zone.  We hung out inside for the most part, but the sunset eventually provided an excellent show, and then we sat outside on the driftwood logs and enjoyed the evening with its crazy gusts and spray. 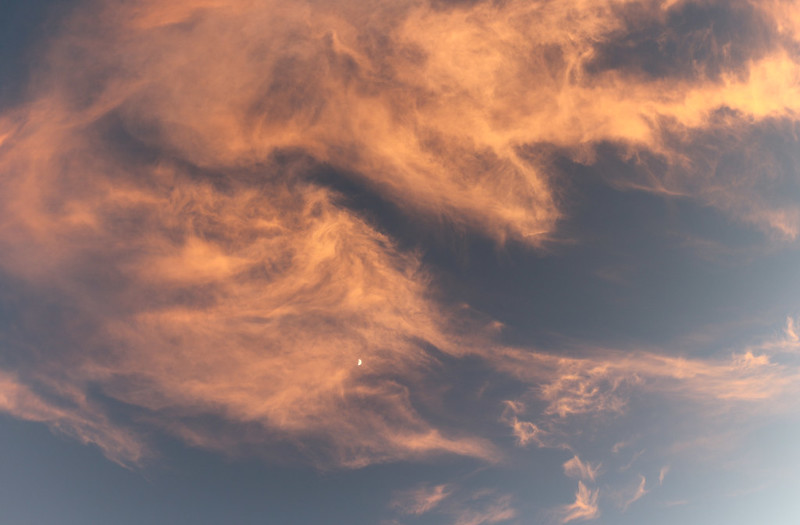 Sunset colors on swirling clouds that raced by up above us 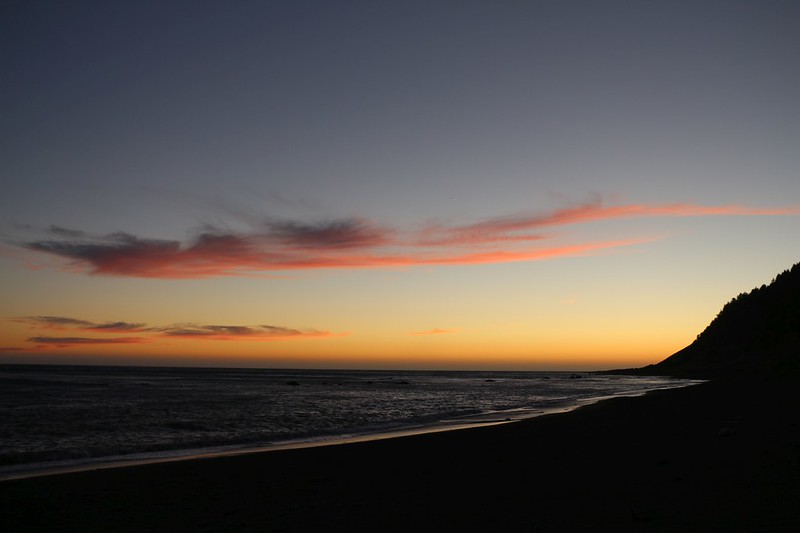 Sunset from the Kinsey Creek Campground on the Lost Coast Trail

We went to bed but it wasn’t easy to get to sleep.  The only good aspect of the situation was that the sand grains were too large to get through the no-see-um screening of the tent.  The frequency of the gusts got lower as the night progressed, but they still happened even after midnight.

I’ll leave this day’s description with this video that Vicki took later on that evening.  We were sure glad that we’d staked down the tent using large boulders and extra guy lines!

It had certainly been a crazy-weather day on the Lost Coast Trail.