Sea Lion Gulch was a bit noisy the morning of our second day on the Lost Coast Trail.  The wind and waves had calmed overnight, but the sea lions were already up, barking and howling at each other.  We woke up at first light, but, since we only had four miles to hike, we took our time eating breakfast.  Just the same, we were the first group in the area to get packed and hiking.  As usual.  Early to bed and early to rise.  We like to hike when the air is cool. 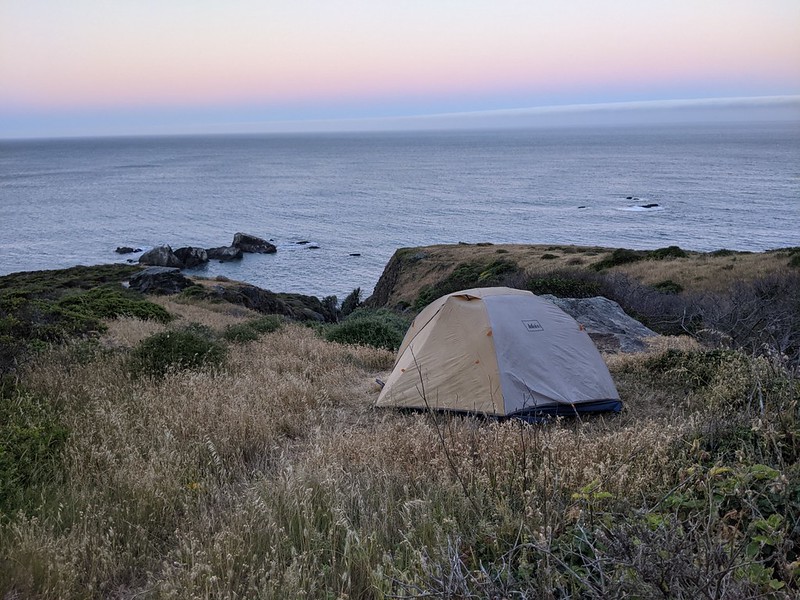 Our tent in the morning at Sea Lion Gulch 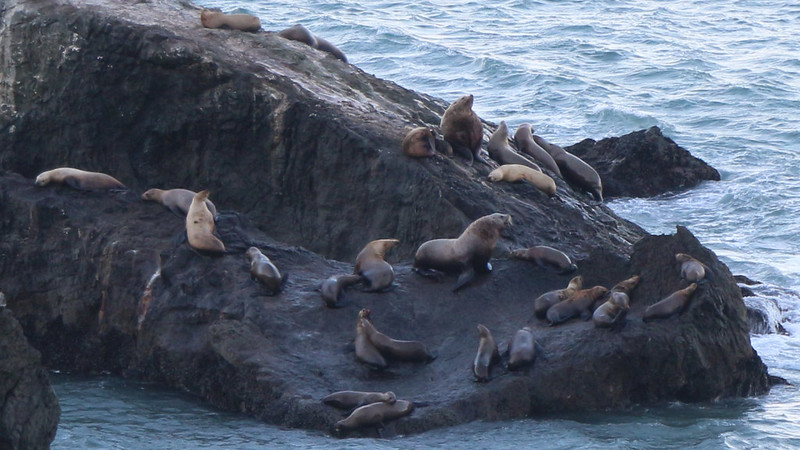 We tiptoed through the main campground on our way down to the beach.  Everyone still seemed to be inside their tents, snoozing happily.  Good for them!  Then we made our way down into Sea Lion Gulch itself.  The trail crisscrossed the small creek as it descended into the steep, narrow gulch, and before we knew it we were back down on the shoreline. 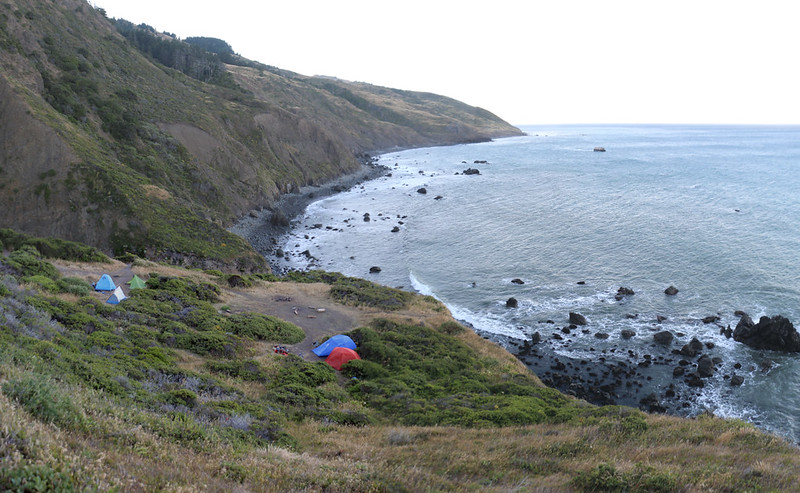 Looking south, down at the main campsite at Sea Lion Gulch 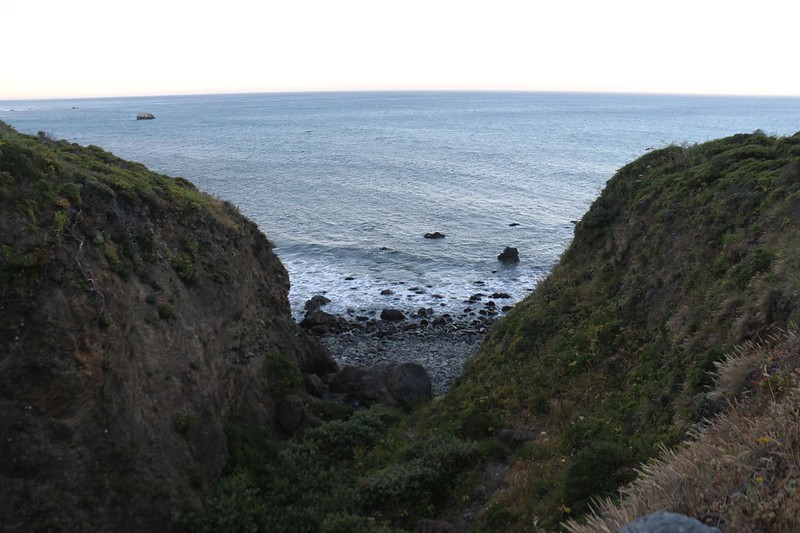 Unfortunately for us, this was one of the sections of beach that we’d been warned about.  Not only were the next four miles of trail within the high-tide-impassable zone, but this first section of beach was composed of small boulders that made hiking slow and difficult.  It would be easy to turn an ankle if a rock shifted or rolled.  We (in the hiking fraternity) call stones like this “Baby Head Boulders,” due to their size and shape.  They are dreaded by all of us due to their propensity to roll out from underfoot.  But we had no choice, really, so we picked our way carefully, finding stable footing when we could, often by walking on the larger boulders which were firmly embedded in the sand. 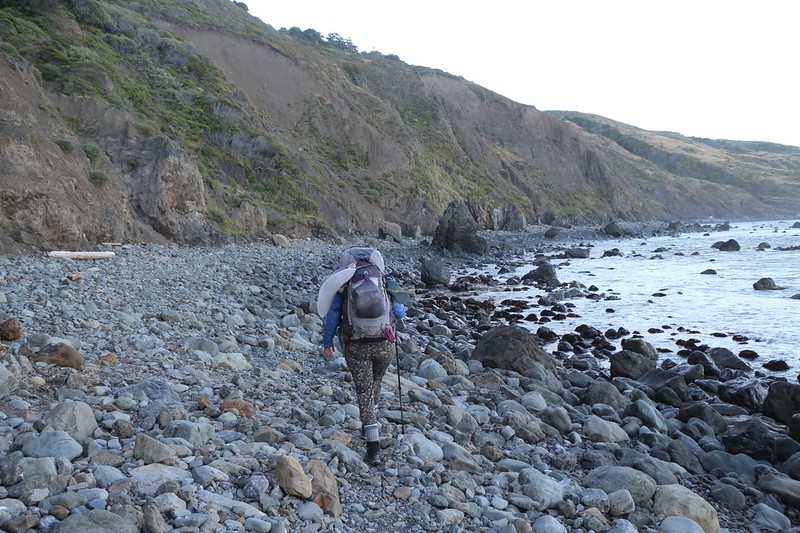 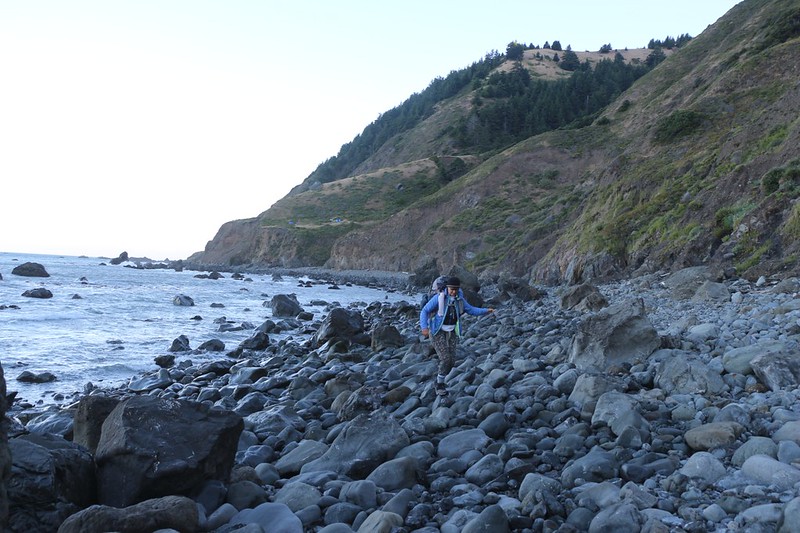 After a half mile of rock hopping, we found the inland trail at Jeep Springs.  This trail climbed about 150 feet, and we got some fine views back north toward Punta Gorda and Sea Lion Gulch.  It also led us to a private inholding where there were some dilapidated structures and rusty pieces of old farming equipment.  We left the property alone and followed the trail back down to the beach.  The drop to the beach was steep and non-obvious, and each of us made it down safely by different paths.  Maybe we should have stayed on the beach and avoided this detour, as we never got close enough to check out the cool-looking teetering boulder on the point. 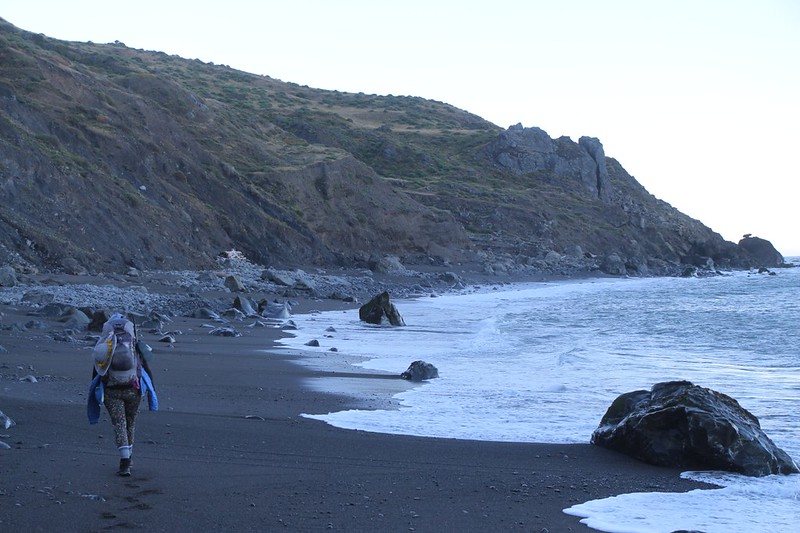 Just ahead, the trail climbed up and over that stony point – so we missed examining the teetering rock 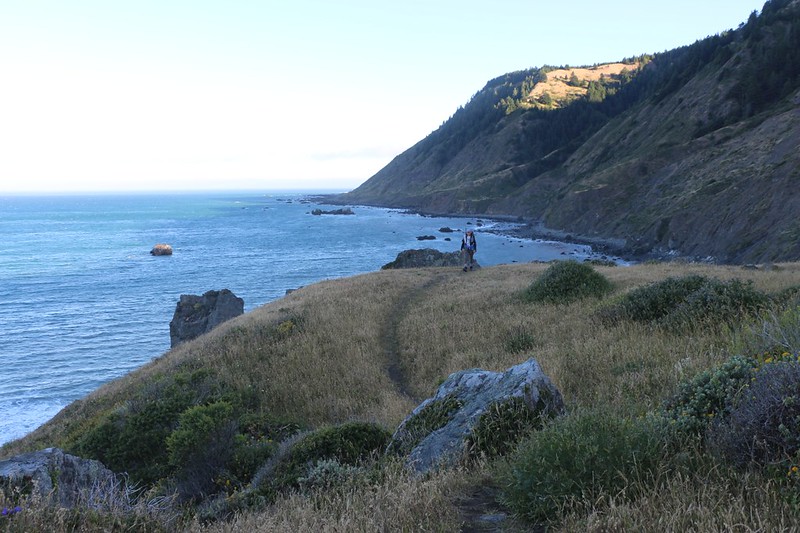 Jeep Springs was below us on the right, as the trail climbed up and over a stony section of beach

Panorama view looking south over an inland section of the trail, with some old structures down below 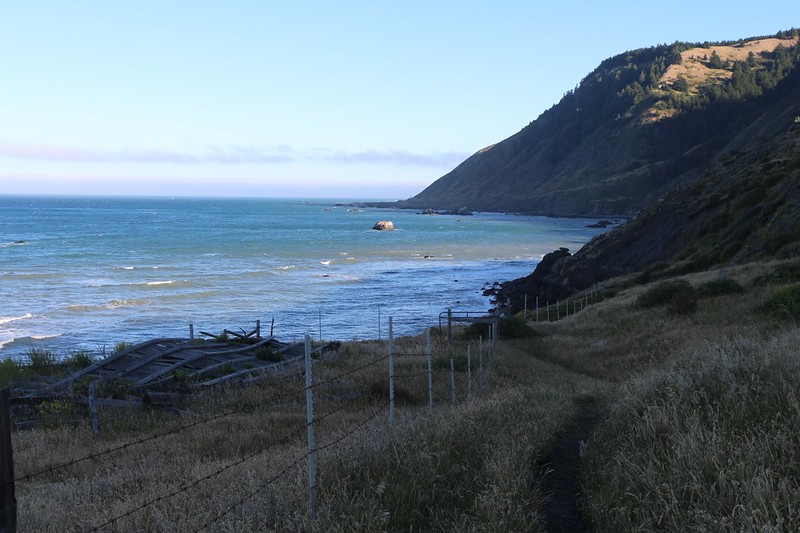 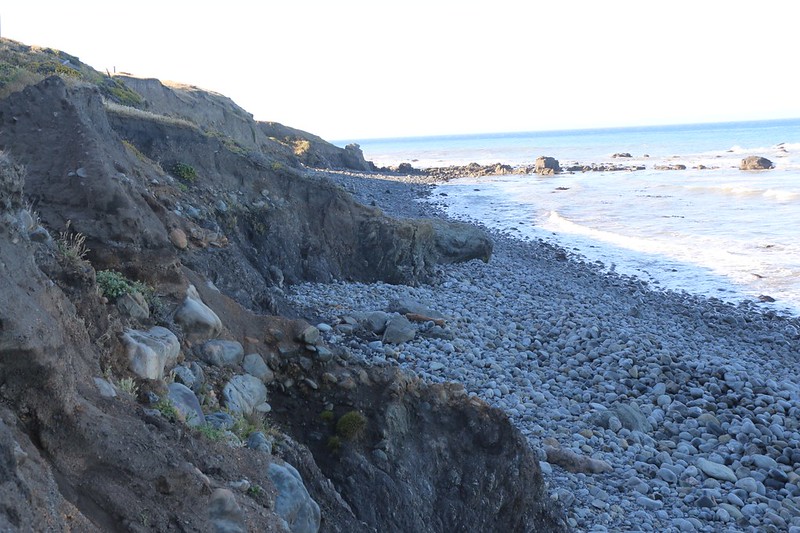 Sadly, we had to find a way to descend to the baby-head-boulder-filled beach down below 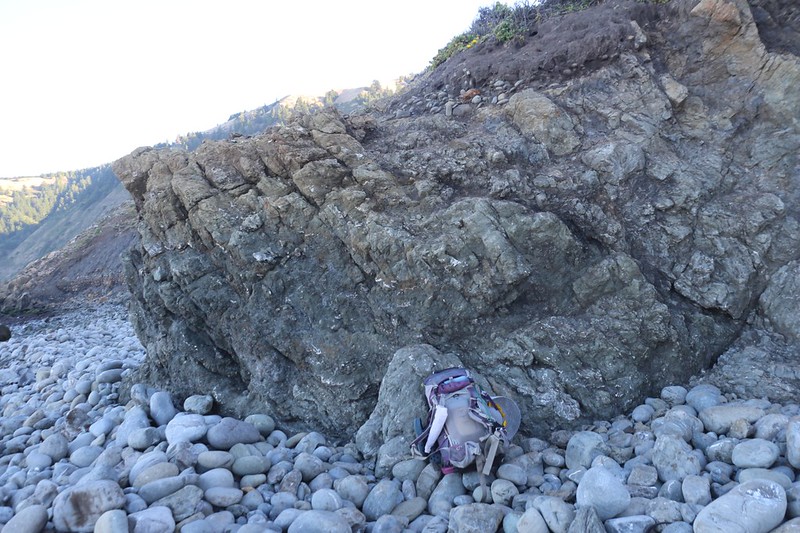 After that, we were back to stumbling over annoying boulders all over again.  Hoo boy!  This was beginning to get old.  But we knew that the distance wasn’t going to get itself covered by sitting down and grumbling.  We were forewarned, and we came here willingly, so hike it we would! 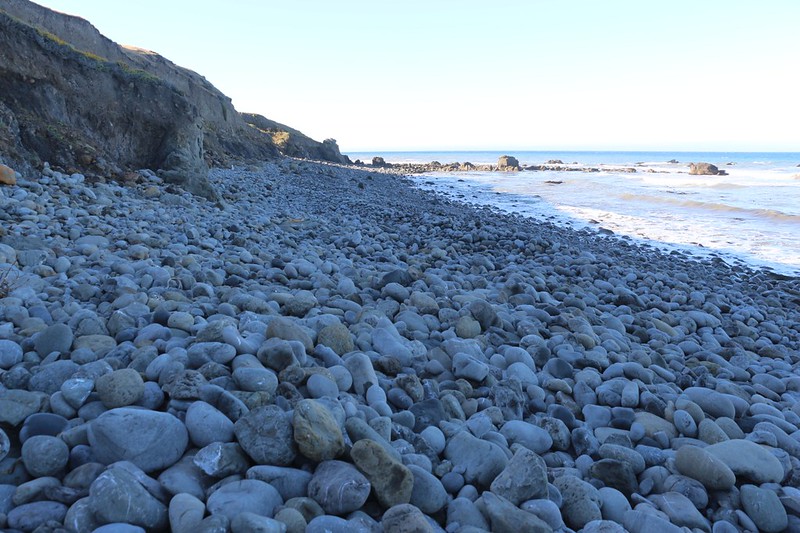 It got warmer as the sun rose above the King Range in the east, and soon we were sweating.  We removed our morning layers and got ready for some serious sunshine.  The weather forecast was holding true thus far.  We met one hiker who said that this was his eighth year doing the trail, and this was only the second time that it had been this perfect.  So we counted our blessings, and hiked on.

We really enjoyed examining out the marine life along the shore.  Low tide meant that there were tidepools exposed to view, and we checked out many of them.  The waves were fairly small that day, and they mainly broke offshore near the further rocks, so that it was quiet and peaceful at the tidepools. 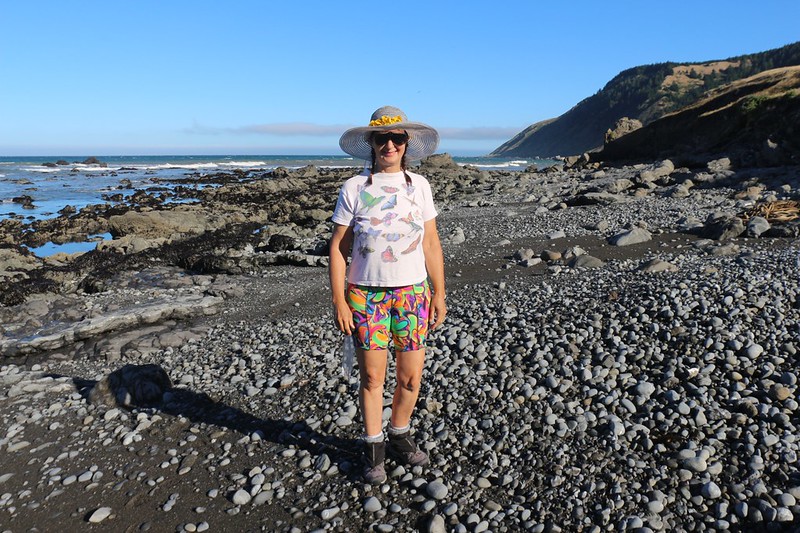 Vicki wore shorts in the sun, on a rare and perfect day on the Lost Coast Trail, which is often foggy, rainy, and cold 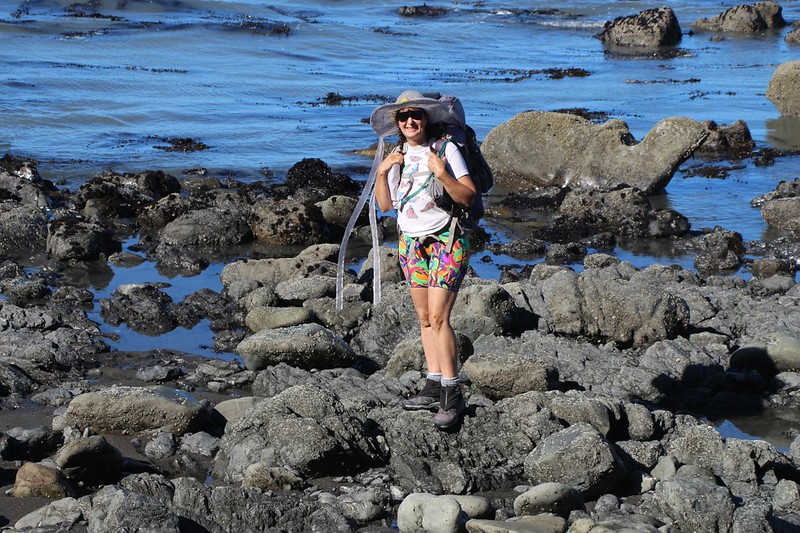 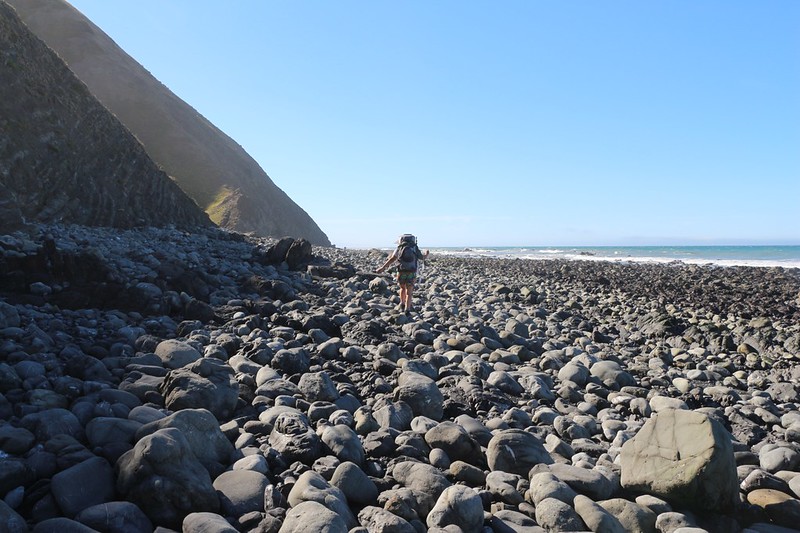 Midway on our day’s hike, at the two mile mark, we came upon Cooskie Creek.  This was one of those campsites that was wholly within the tidal zone, so that once the tide rose above 2.5 feet, anyone at the camp would be unable to safely leave.  But this didn’t look to be a big problem, as the creek provided plenty of water, and there were even some decent views inland toward Cooskie Mountain.

We took a break in one of the campsites, and Vicki took a nap in the sun.  That was fine by me.  I read my book and enjoyed the sounds of the creek, and of the surf beyond the beach.  Life was good. 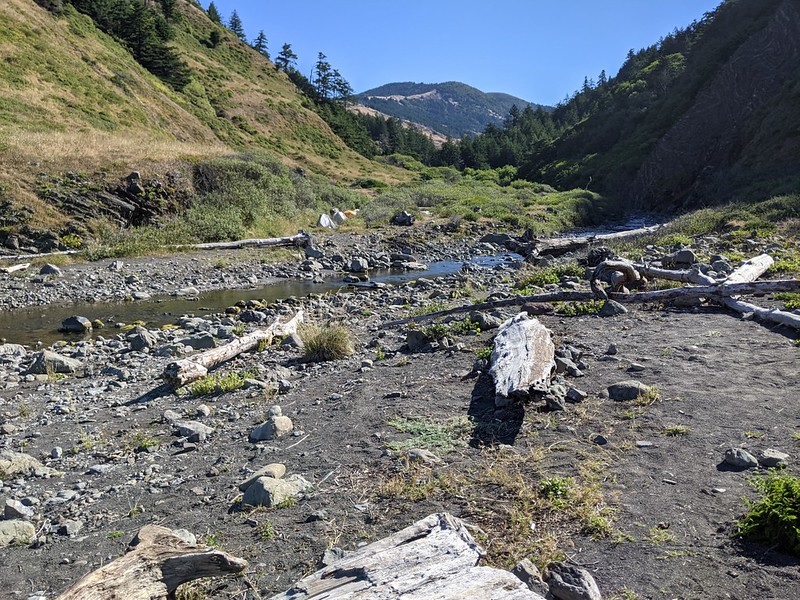 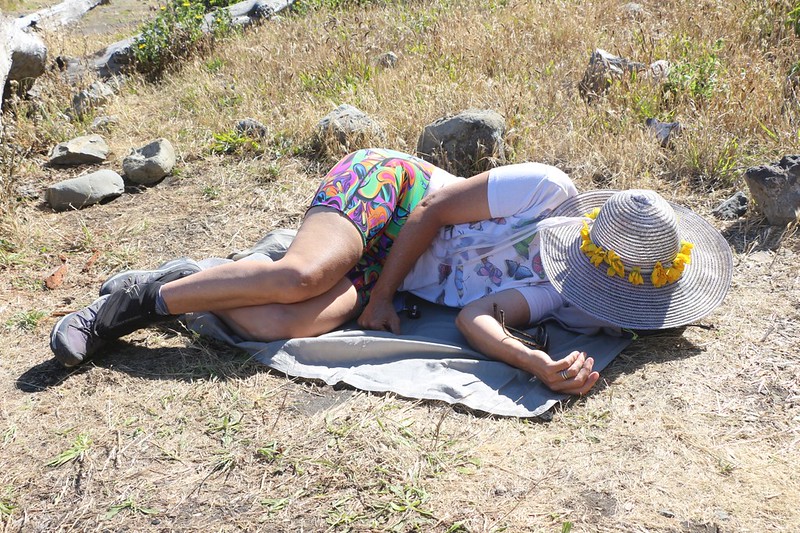 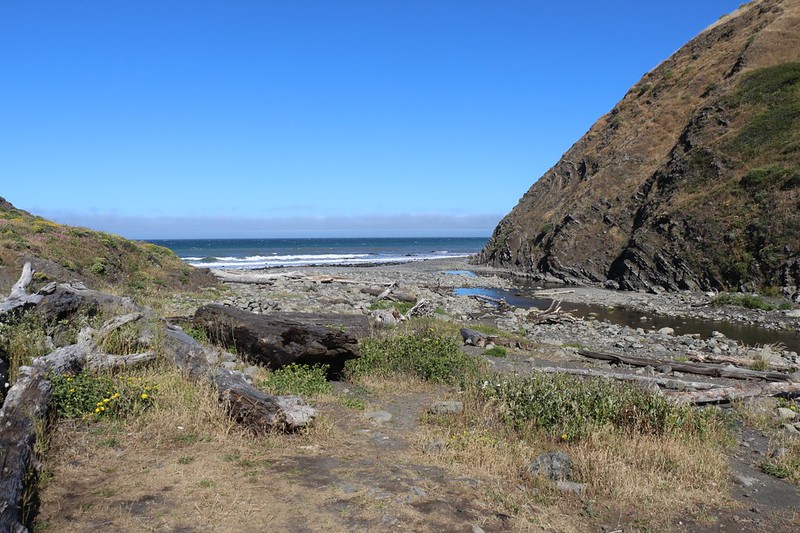 Looking out at the ocean and beach from the Cooskie Creek campground – very nice spot!

After Cooskie Creek, the beach boulders were mostly gone.  It was back to a proper sandy beach.  Although, to tell the truth, the sand was often soft, and the hiking became a bit of a slog.  Sadly, we were warned about this, as well!  I don’t show a lot of photos from this stretch of beach, but suffice it to say that the next two miles took us almost two hours to hike!  But then again, we also stopped to check things out along the way.  Other groups of hikers passed us with little or no difficulty.  And that’s the way we like it.  “Hike Your Own Hike” as they say on the PCT.  To each their own. 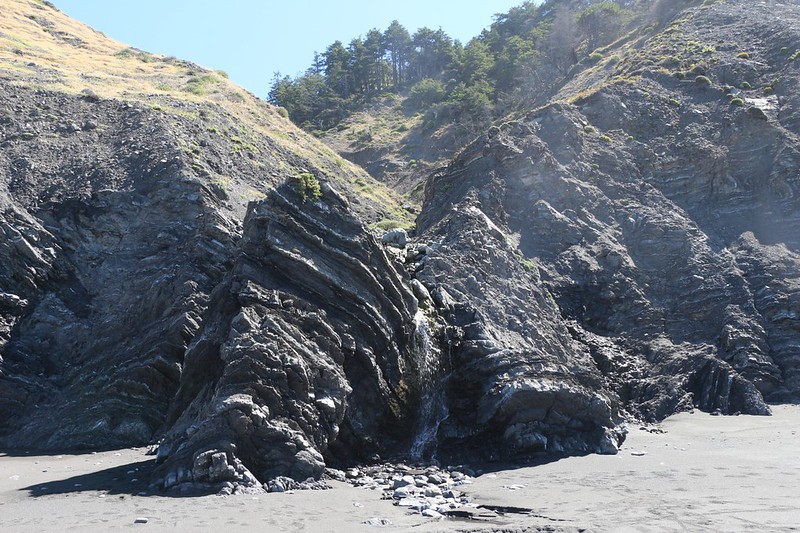 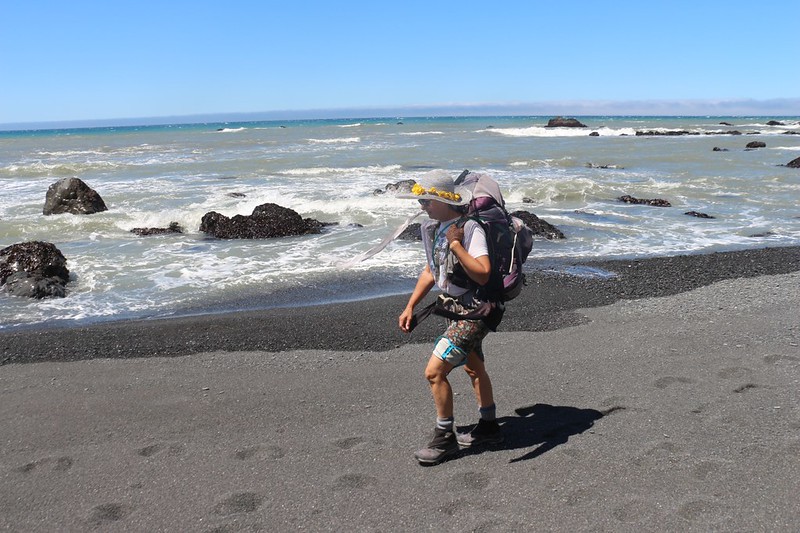 The sand turned to gravel. It was deep and sloggy, as you can see by the footprints – a real chore to hike

It was getting close to noon when our hike was over.  Four miles goes pretty quick, even over boulders and soft sand.  But that was OK with us.  This time we would get our pick of the camping spots at Randall Creek, unlike yesterday.  So we dropped our packs on a nice spot on the sand, well above the high tide line, and proceeded to wander around the area.  We found a bunch of different spots, but most of them had problems, either too windy or too far inland.  Plus, we really wanted to camp on the beach!  Isn’t that why people hike the Lost Coast Trail? 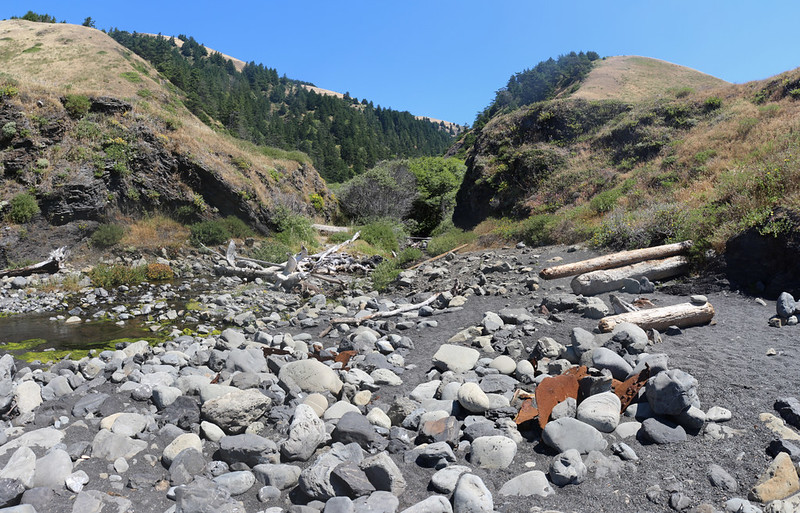 We arrived at Randall Creek before noon, and we were the only ones here, so we had our choice of campsites!

Panorama shot of our tent, with the doors wide open for max airflow on a hot day at Randall Creek

So we set up the tent and rigged it for shade, as we had the entire sunny afternoon to look forward to.  Then we lounged around in the tent, reading and napping.  But not for long.  Some folks we’d met the night before we started at Mattole Beach came by, so of course we had to socialize.  They found a deep pool just up the creek and opted to take a dip in the icy water.  Vicki and I laughed as they whooped from the cold.  They got dressed and left, and we went back to the shady tent.

Soon enough, another group of five arrived.  But these folks were intending to camp here.  Not surprisingly, they chose to camp on the beach right in front of (and behind) our tent.  It was a bit sad, but we knew that we were only two people and we really shouldn’t hog up the whole beach.  And it turned out that they were a really fun group of people.  We introduced ourselves and got to know each other a bit.  Vicki and I helped one of them tie down his tent, as the afternoon breeze was in full swing once again, and he was grateful.  You only have so many hands and the wind has lots of them.

It turned out that (at least) one of them, named Martyn, was a member of the Surf Rock Band called The Mermen.  Sadly, I had never heard of them, but that was OK.  They’re a band out of Santa Cruz, CA with a decent following.  I’ve since listened to their music, and its excellent.  “Psychedelic Instrumental Ocean Music” as it says on their website, which has a playable sample on the page. 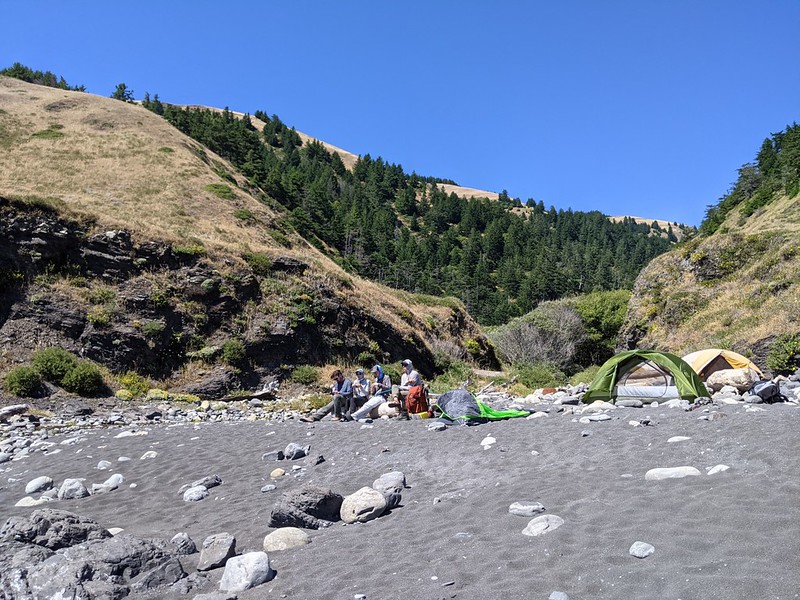 Later that day, another group arrived and set up their tents near us on the sand – they were good neighbors 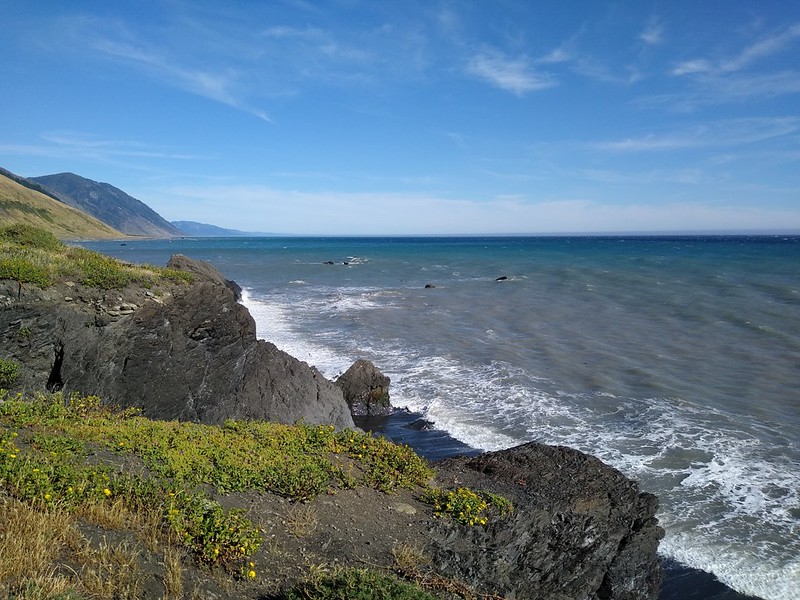 View along the coast from the high ground south of the campground. We had Verizon signal up here! 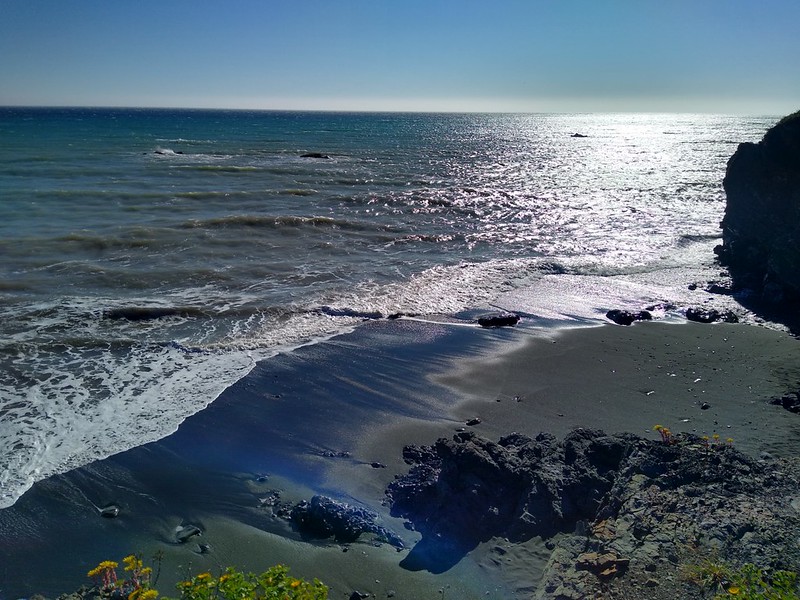 One last couple arrived from the north late that afternoon, when Vicki and I knew that the tide was technically too high.  They had timed a final dash around the point just north of the campsite, and only one of them got his shoes wet.  But they didn’t stay, and continued onward to the south.

After that, we filtered our water and cooked up some dinner.  We hung out with the Mermen and ate our food.  The afternoon grew long and soon enough the sun was setting into a cloudless sky. 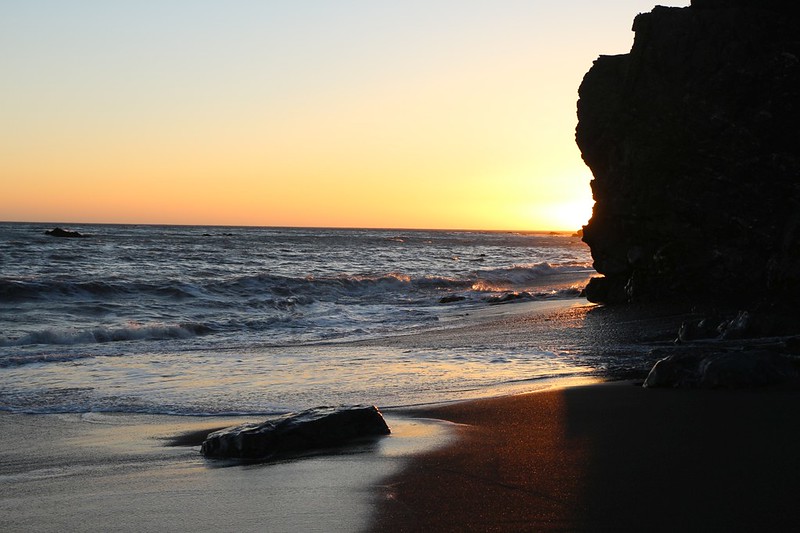 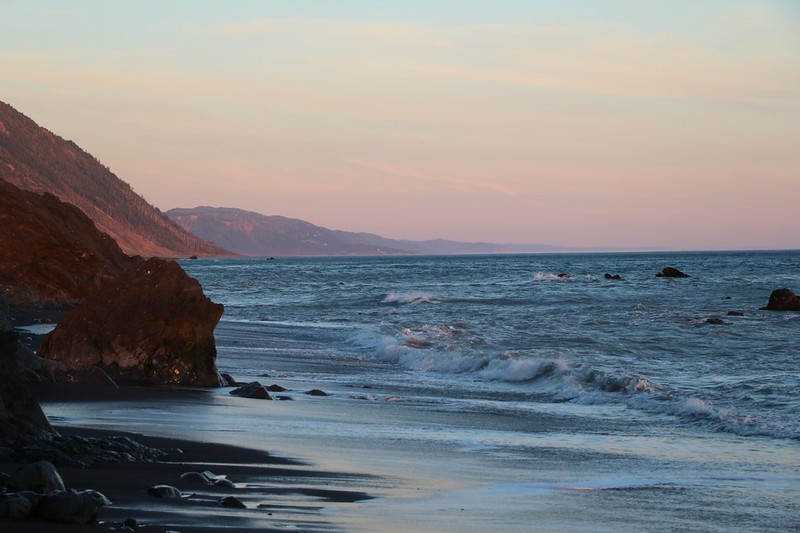 Sunset light looking south along the coast at high tide

Contemplating the surf at sunset

It was a very mellow scene as we all hung out on one of the big driftwood logs and watched the waves breaking on the sand, as the sun slowly set in the northwest.  Vicki and I got out the map and discovered that we only had 3.6 miles to hike the next day, while our new friends would be hiking eight miles.  They only had three days to hike the whole trail, as they all had jobs and responsibilities.  Martyn said that he really wanted to get to Big Flat because the surf caused the rocks to make cool knocking sounds.  We resolved to check that out ourselves, two days from now.

And then we headed off to sleep, with the sounds of the surf close by.