Summary of the second day:  We decided to visit Ubehebe Crater in the far north of the park, stopping off at the Mesquite Flat Sand Dunes on the way.  Initially, we had to drive off-road from our camp in Marble Canyon, and it was Vicki’s turn to drive on the tough section of road.  She had to have a turn on the rented Rav4, too.  After seeing the crater, we would return south and head west over Emigrant Pass, then drive up to the highest part of the park, to the Manzanita Flat campground at the trailhead for Telescope Peak.

In other words:  Our plan for the day was to do a whole lot of driving, and Death Valley is the perfect place for it. 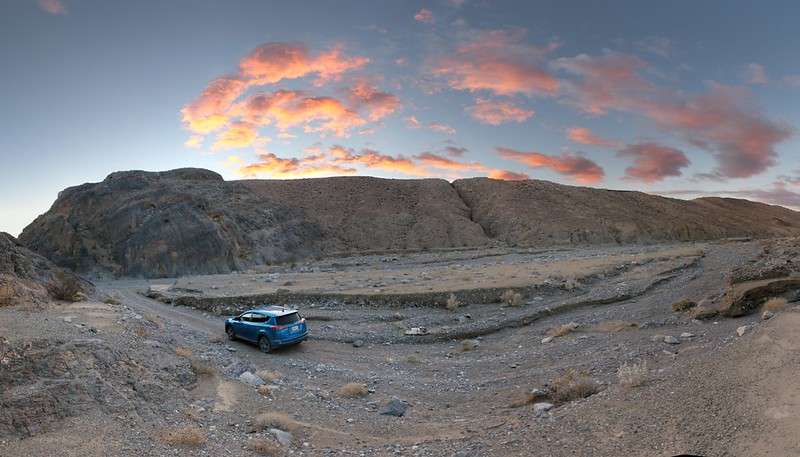 Panorama shot of sunrise from our camp in Marble Canyon

We took our time waking up that morning.  We were on vacation, and there was no rush whatsoever.  And that cheap air mattress was remarkably comfortable.  So was the back of the Rav4.  I’m six feet tall, and had no real trouble sleeping in there.  But the mattress was eight inches thick, and our heads hit the roof when we sat up, so we had to hunch a bit while getting dressed.  What we gained with the extra thick mattress we lost with the headroom.  Oh well.  Maybe we’d try using thinner pads another time.

We ate a mellow breakfast, then tossed all our gear into the back of the car.  We had to get the front seats ready for a day of exploration.  Then we headed out of Marble Canyon on the long dirt road to Stovepipe Wells. 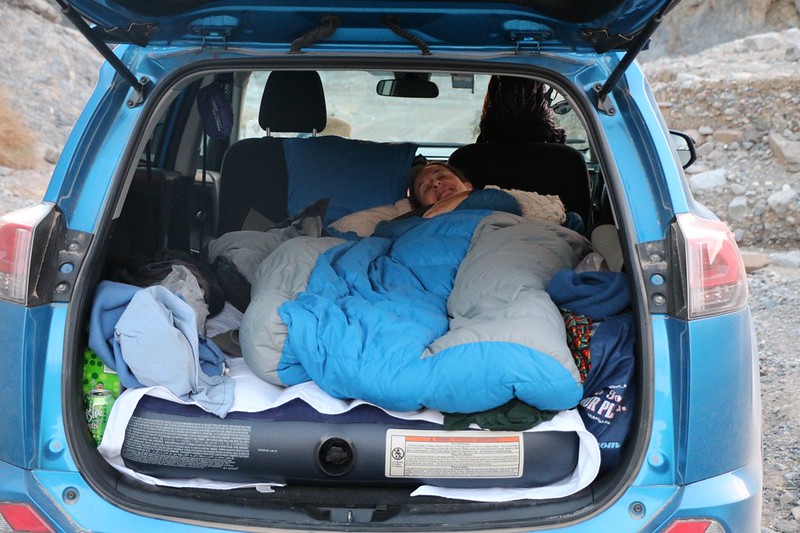 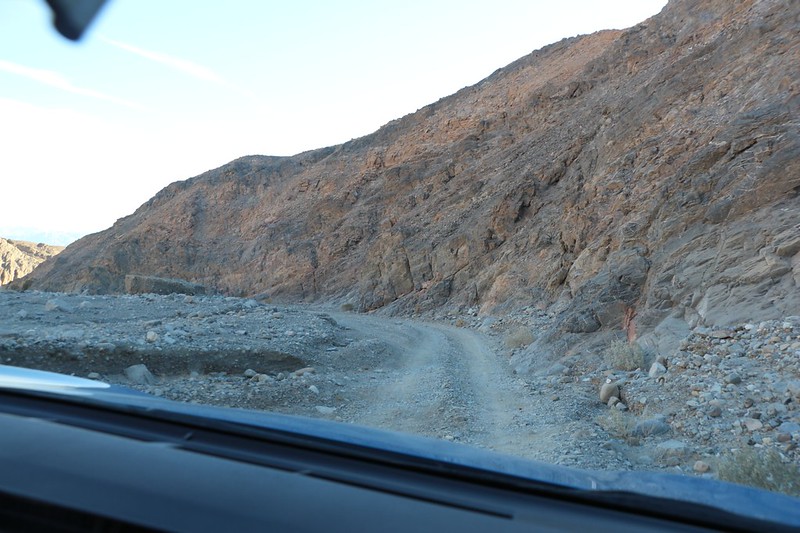 First stop:  Mesquite Flat Sand Dunes.  We were on the road early, so the parking lot wasn’t totally mobbed yet, but there were still a lot of people out on the dunes.  In fact, we saw some stronger hikers already climbing the tallest dune of all.  That takes dedication, as the sand is deep and soft.  We only explored the edge near the parking area.  We’ve hiked in sand like that before, and had no desire to repeat the experience.  Slogging. 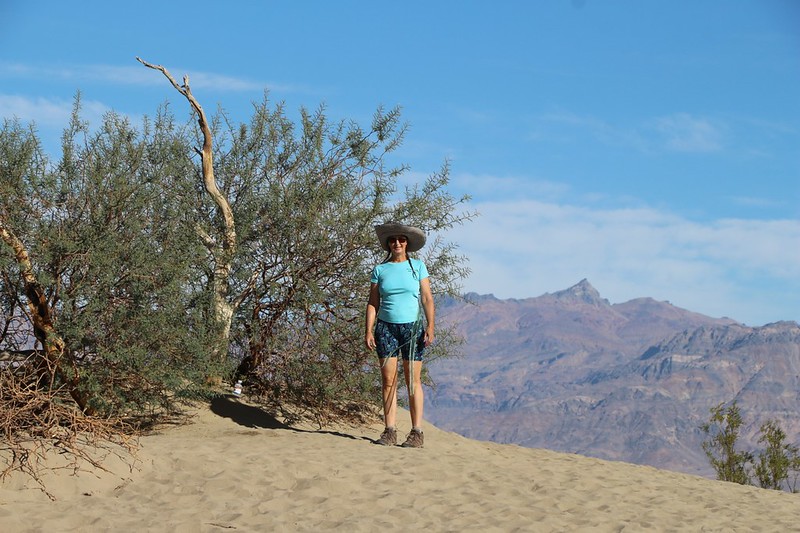 Vicki posing at the Mesquite Flat Sand Dunes along Highway 190 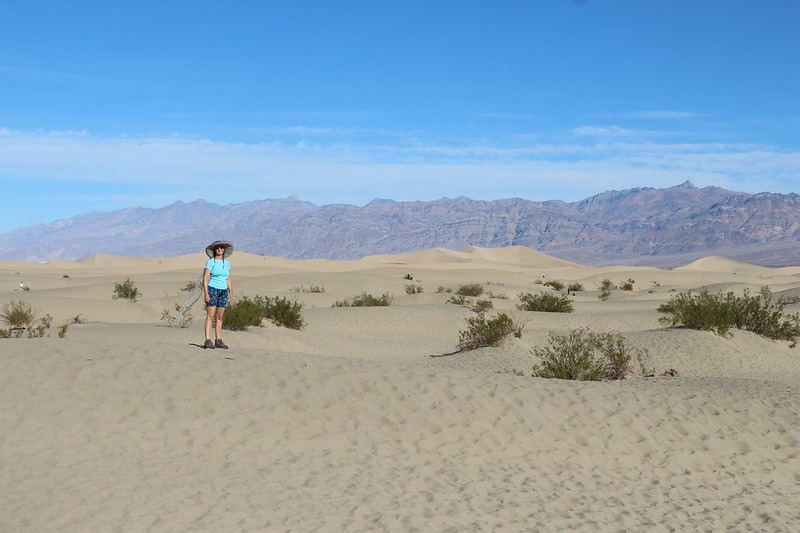 It’s a long hard slog to get deep into the dunes. We gave up almost immediately.

After that, it was time for some serious driving.  We headed north on Scotty’s Castle Road for about 45 miles or so.  Did I mention that Death Valley is a big park?  It’s really big.  You have to have a big gas tank and not be afraid to use it. 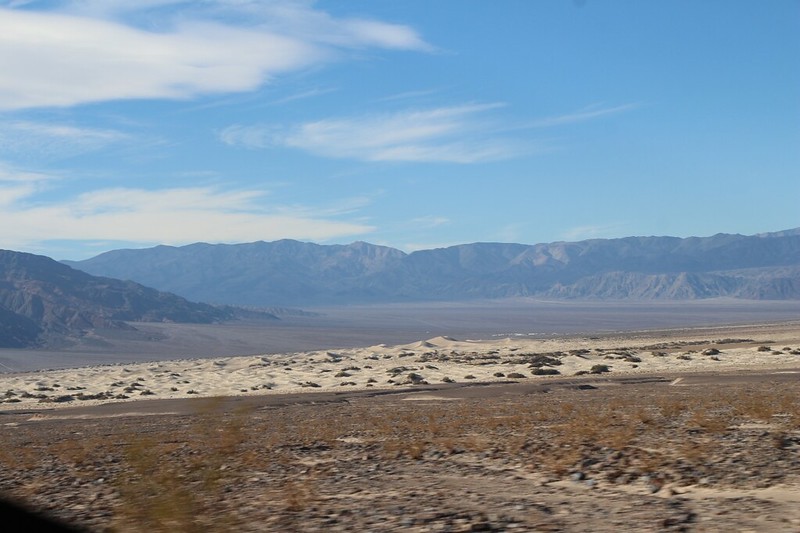 Looking back at the dunes from Scotty’s Castle Road 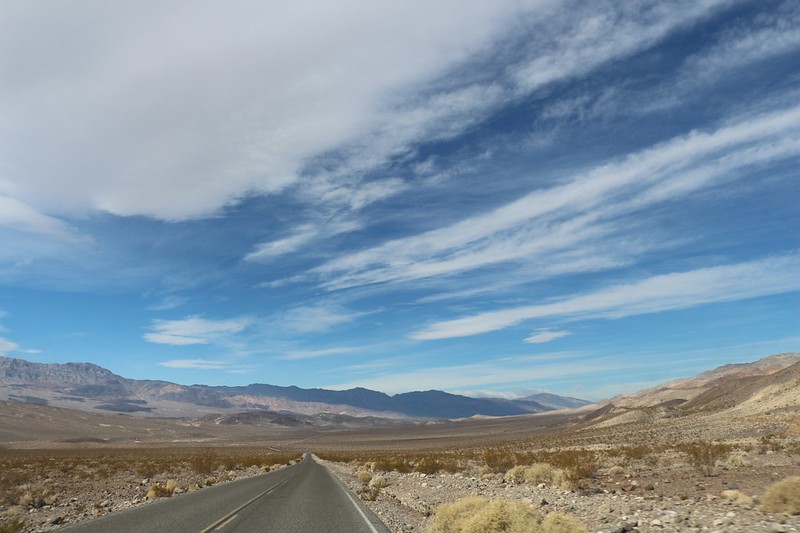 Long but beautiful drive north toward the crater

Scotty’s Castle was closed due to damage from a huge flash flood, so we couldn’t visit.  We simply continued onward to Ubehebe Crater.  The paved road goes all the way there.  This is where the unpaved road heads south to The Racetrack, but we decided to check that out on another trip, some other year.  It would’ve been a long, slow drive on a dusty 4WD road, and we had other plans for the day.

So we parked the car and started our day-hike to see the crater.  Not that you needed to hike:  The parking lot was situated directly on the rim.  But we wanted to stretch our legs, and the trail looked easy enough.  So up along the crater’s rim we hiked.

It was breezy, and there were plenty of beautiful high cirrus clouds to make the photos better.  And the crater was quite stunning.  We could see traces of the ejecta all around the area.  We were glad that we weren’t nearby when it blew up.  The crater wasn’t hugely deep, and we could see that some people had hiked down to the bottom, but we decided not to bother.  You don’t get great views down in a pit, after all.  But climbing higher?  Oh, yeah! 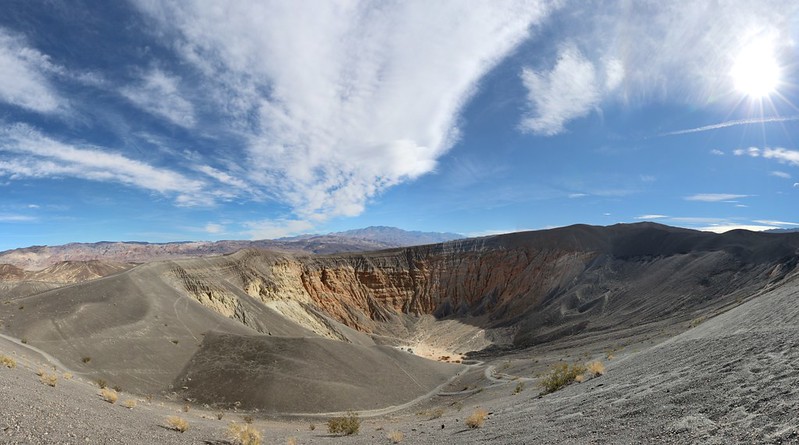 Panorama view of Ubehebe Crater from the parking area 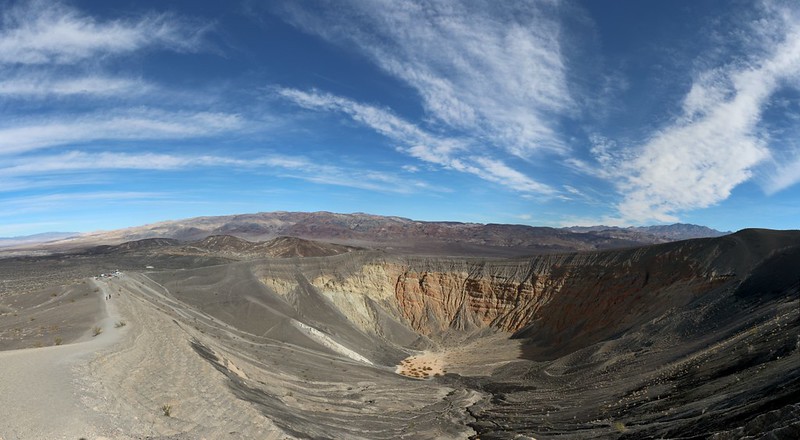 Ubehebe Crater and the trail back down to the parking area

From the top, it was an easy walk over to the adjoining Little Hebe Crater, which wasn’t anywhere near as deep as Ubehebe.  It also didn’t show any red stone inside.  Lava only, more like a cinder cone than the result of a major eruption.  But that was OK.  It was fun to check it out.  The Earth sure is a fascinating place, and it’s great to be alive to see its many wonders. 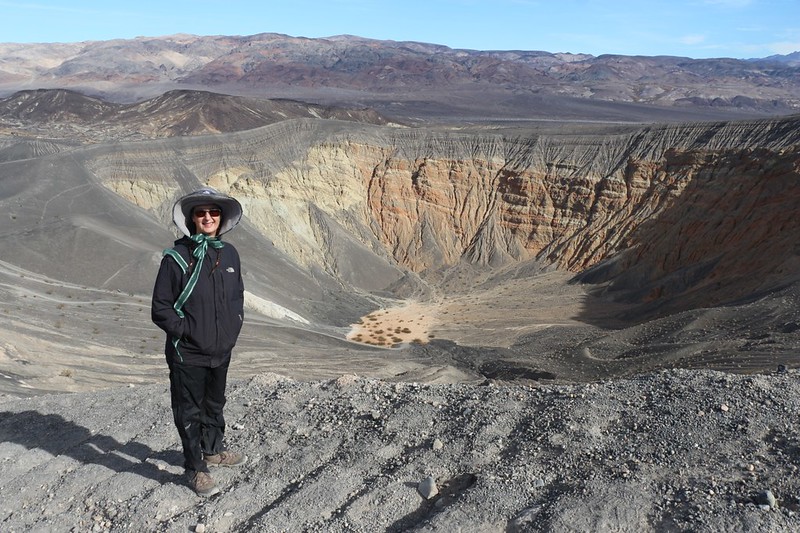 Vicki poses on the crater’s rim

We headed back to the car and ate our lunch by the crater.  Then it was time to drive all the way south again to Stovepipe wells.  There goes another hour.  Along the way, we stopped to check out the Devil’s Cornfield, which was a rather “corny” name, we thought.  Then we topped up the gas tank while we had a chance.  You don’t want to risk getting stranded without fuel, because there’s rarely any cell phone signal in Death Valley. 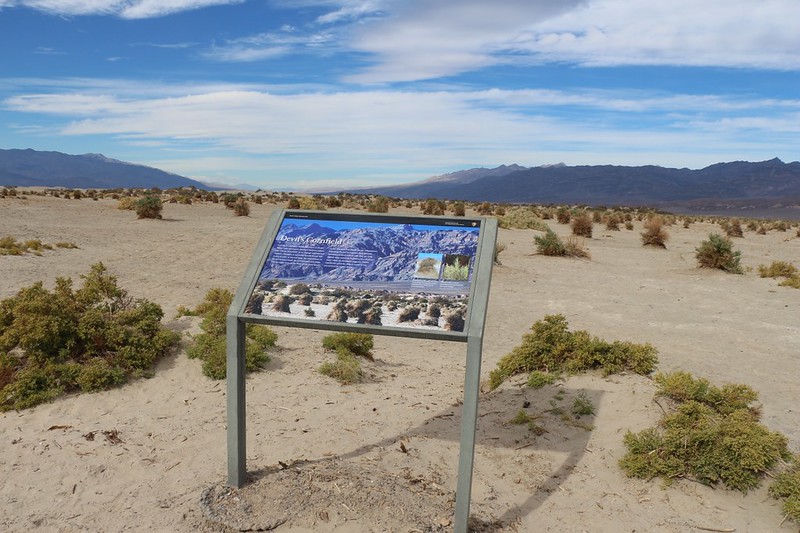 We headed west on Highway 190, then turned south on Emigrant Canyon Road.  The road climbed until it crested Emigrant Pass, up above 5000 feet elevation, and we stopped to take a look.  We tried to imagine what it had been like for the early settlers, who had traversed Death Valley in covered wagons.  And we imagined the lonely life of the early miners, wandering everywhere, poking their noses into every nook and cranny, hoping to strike it rich.

We continued downhill to the west, until we turned south on Charcoal Kiln Road.  It began climbing significantly.  Soon, the pavement ended and we were driving on a wide dirt road.  I looked behind me in the rear-view mirror and was shocked.  I stopped the car and got out my camera.  There were snowy mountains in the distance to the west!  Surely, they had to be the Sierra Nevada.  I took some photos, then checked the PeakFinder app on my phone.  Sure enough, we were looking at Mount Whitney, its summit shrouded in clouds.  And off to the left was Mount Langley.  They were exciting to see, as I’d climbed Mount Whitney solo last July, and Mount Langley with my son back in September 2015.  They were like old friends to me. 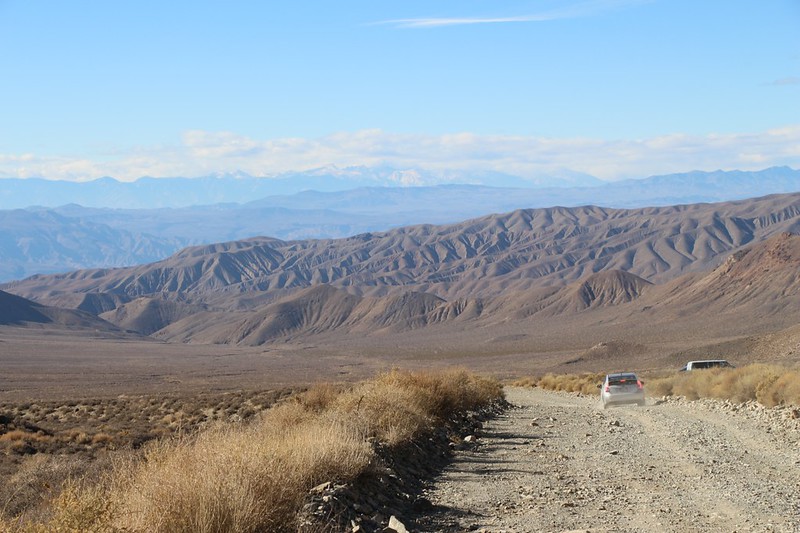 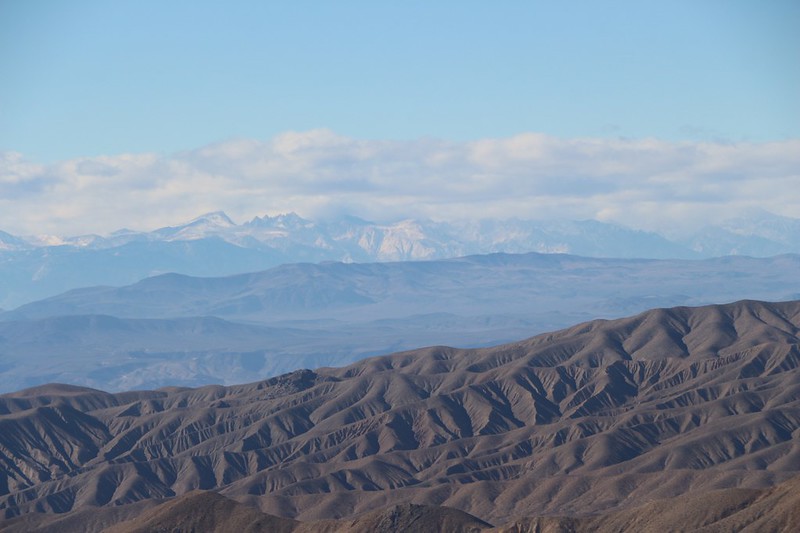 We continued uphill until we reached the Charcoal Kilns.  We pulled over and walked to the kilns.  We read the information signs and learned that the miners had used this kilns to convert the abundant coniferous forest up at this altitude (6900 feet) into charcoal that could be used at the mines 25 miles to the west, to help smelt and refine the ore.  We walked inside one of them, through the arched doorway, and discovered that they had only one high window in the back.  The sounds of our voices also echoed wonderfully.  We had fun making weird sounds.  The inside walls were still blackened from the fires set back in 1879.  We stirred up old dust that still smelled like soot.  It must have been quite an operation, but we were still glad that the local forest had fully regrown in the more than 100 years since then. 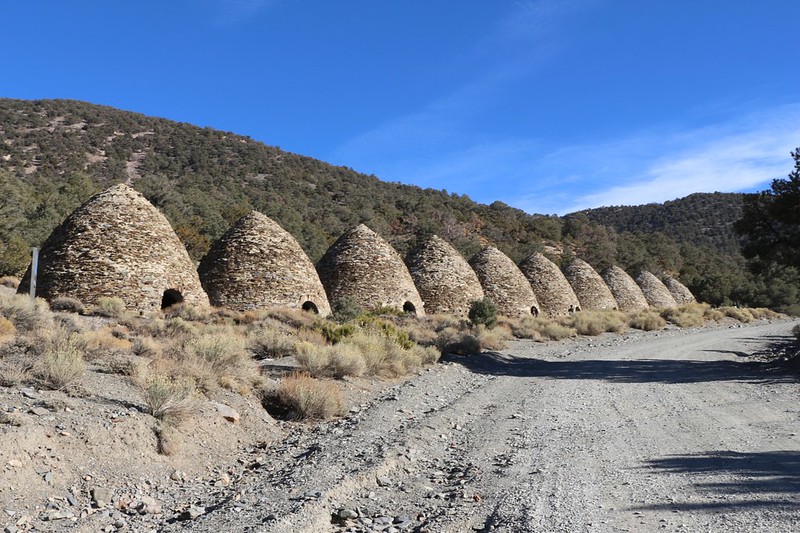 We arrive at the Charcoal Kilns

GoPro video as I enter of one of the kilns 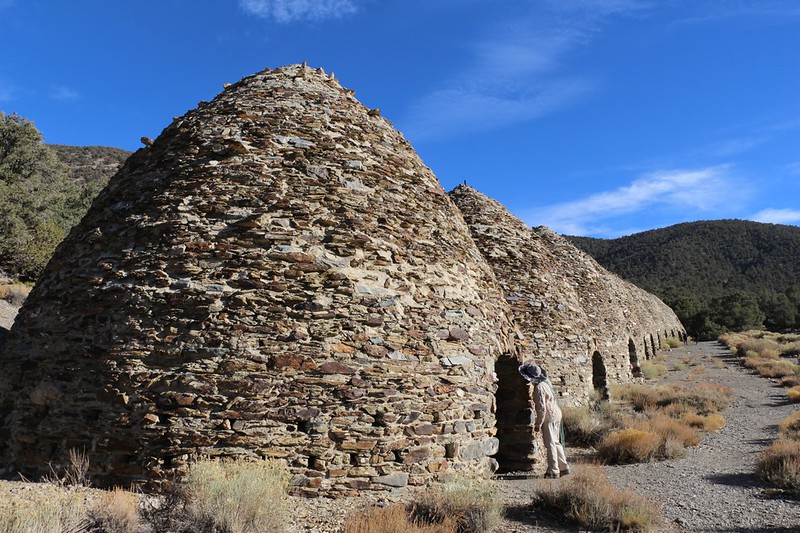 Charcoal Kilns all in a row. This was quite a busy operation at the time. 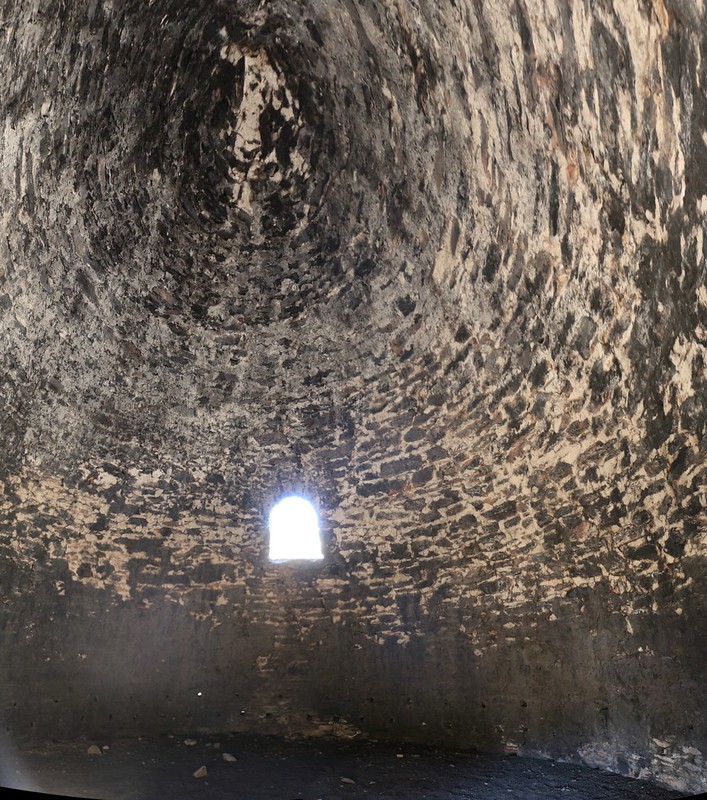 Multi-photo stitched panorama shot from inside one of the kilns

After the kilns, the road narrowed and roughened significantly.  We had to stop and back up several times to find a pullout so that people coming down could make it past.  The Rav4 did a good job on the rough terrain, so I was feeling better about possibly buying one.  It even had no trouble on a short stretch of road that was still covered in a thin layer of snow.  It was fun to see snow in a park that was home to the hottest place on Earth. 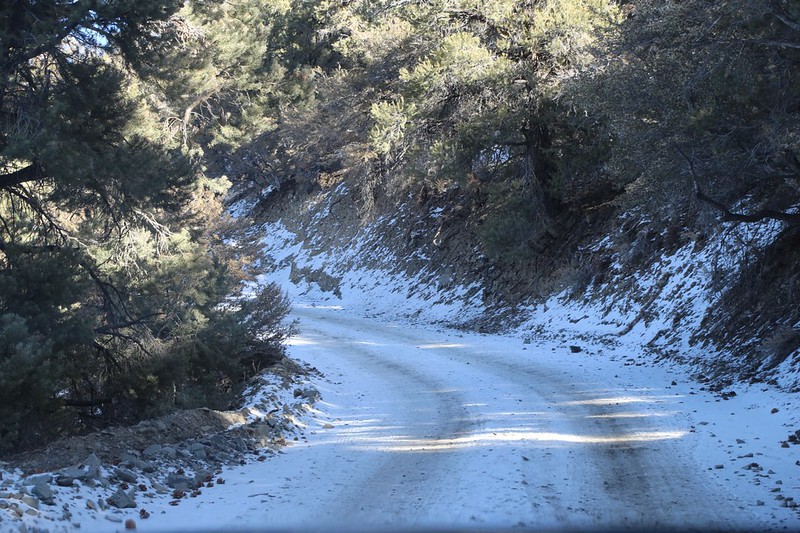 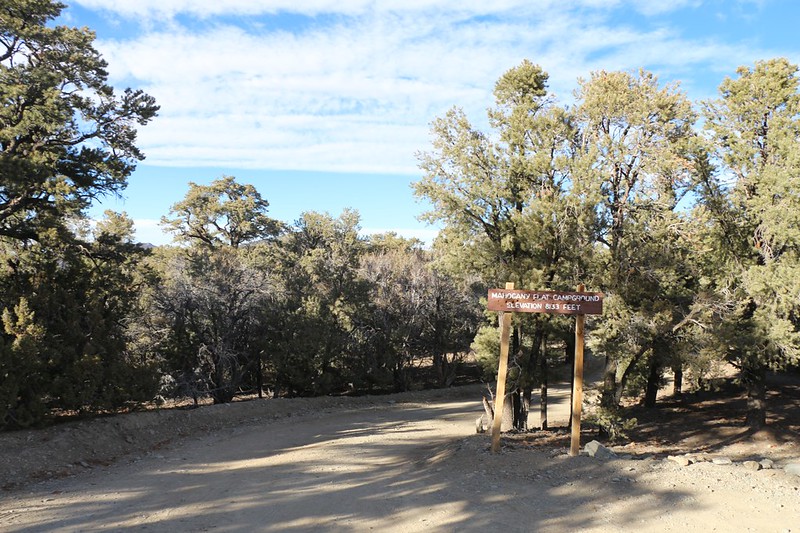 The road ended at the Mahogany Flat Campground, and there was a small trailhead parking area just outside the campground for people hiking on the Telescope Peak Trail.  We parked in the parking lot, then took a walk down into the campground.  Every single spot was already taken.  It was only 3:30pm, but darkness comes early at the end of November, and everyone else was already settled for the night.  Most of them would be hiking to Telescope Peak in the morning, along with ourselves, but that didn’t help us right then.  We needed to camp somewhere.  We looked at each other.  Did we really even need a campsite?  We were sleeping in the back of the car, after all.  And did anyone really care?

So we got out the stove and Vicki cooked up some afternoon tea, plus a tasty freeze-dried dinner, while I rearranged all the gear in the car so we could crash in the back.  Then we got into some warm clothing for the night.  We had a feeling that it might be freezing by morning way up here in the mountains.

We grabbed our books and walked to a comfortable spot with a good view out over Death Valley and ate our dinner while the sun set behind us in the west, lighting the mountains across the way with an orange glow. 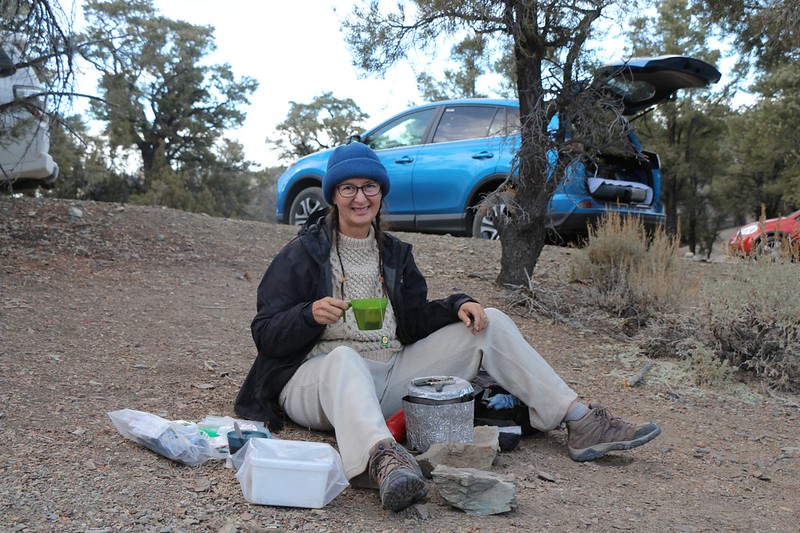 Vicki steeps her afternoon tea as the temperature starts to drop 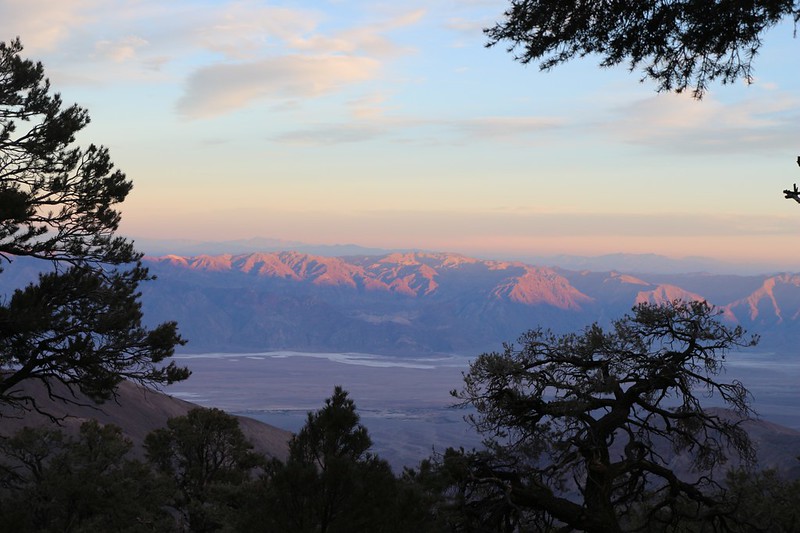 Sunset light on the Black Mountains to the east above Badwater, 8000 feet below us

Then we went to bed, with plans to wake up at the crack of dawn.  Our goal for tomorrow was to hike on the trail to Telescope Peak, and it was seven miles each way.  That’s a seriously long day of hiking, and getting started early was crucial.  We lay down in the cozy sleeping bag as it got darker, and talked about our day.  We sure did a lot of driving, which is par for the course in the desert.  What we really like to do is hike, and we were hoping that tomorrow would be certain to address that desire.  At least that was the plan.