Vicki and I took a four-day whirlwind tour of Death Valley National Park during the 2019 Thanksgiving weekend.

Summary of the first day:  We visited Badwater, Natural Bridge, Artists Drive, the Furnace Creek Visitor Center, and the Harmony Borax Works.  Those were all Standard Tourist Attractions.  As the sun went down, we drove to Stovepipe Wells and continued off-road across a sandy valley to Marble Canyon, where we spent the night.  We did a tiny bit of hiking that day, but mostly we drove.  Death Valley is a really big park, and if you want to experience its wonders you’re going to have to do a lot of driving.

In fact, it was a five-hour drive from San Diego just to reach the border of the park.  We left our house at about 5am, a bit later than usual, but just early enough to avoid the evil L.A. traffic.  It was Thanksgiving Day, so it wasn’t bad at all at that hour.  We stopped for breakfast in Victorville, and arrived on the southern end of the park, on Highway 178, about 10am or so.  Just like we’d planned. 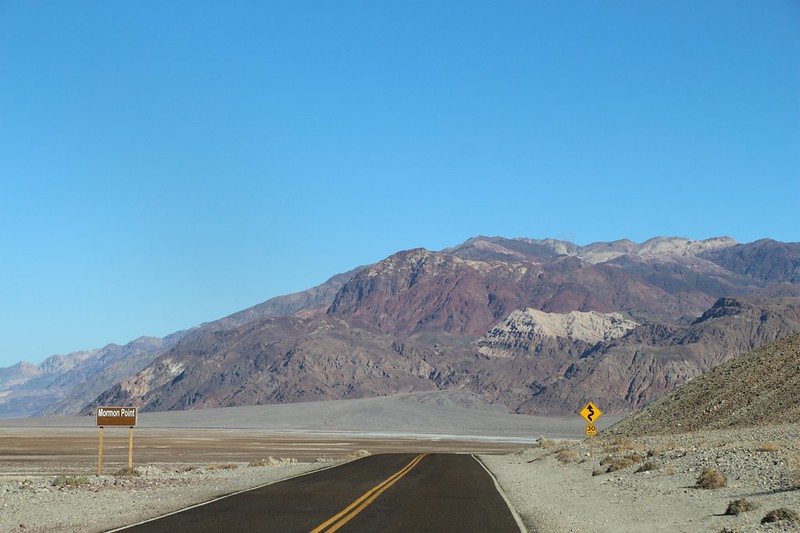 The view north from Mormon Point on Highway 178

First stop:  Badwater.  The lowest spot in the United States, and one of the driest.  We parked in the paved lot and checked out the posted information signs, then followed all the rest of the people on the well-trodden, half-mile path to the salt flats out on the valley floor.  Near the end of the path everyone spread out so that they could get photos with only themselves showing.  We traded cameras with another couple and got a few good shots.  Proof that we were there.  On the way back we kept seeing the “Sea Level” sign mounted 292 feet above us on the mountainside.  It really puts things into perspective. 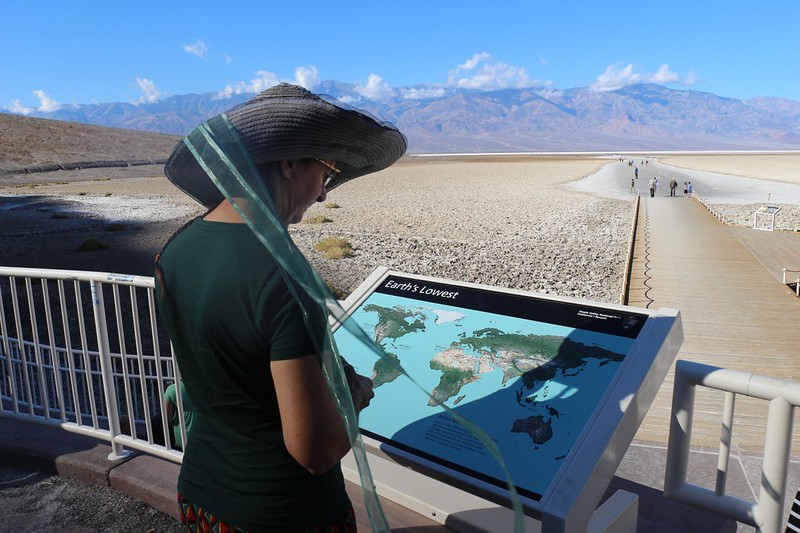 Vicki reading one of the informative signs at the Badwater overlook 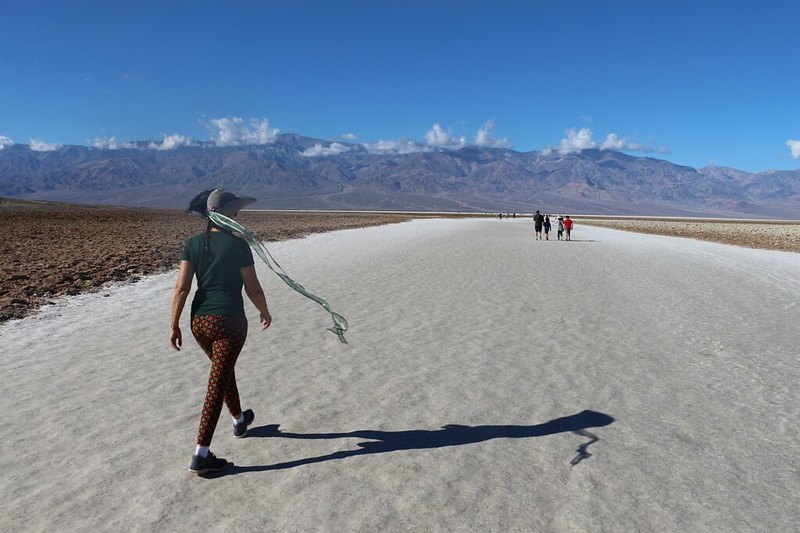 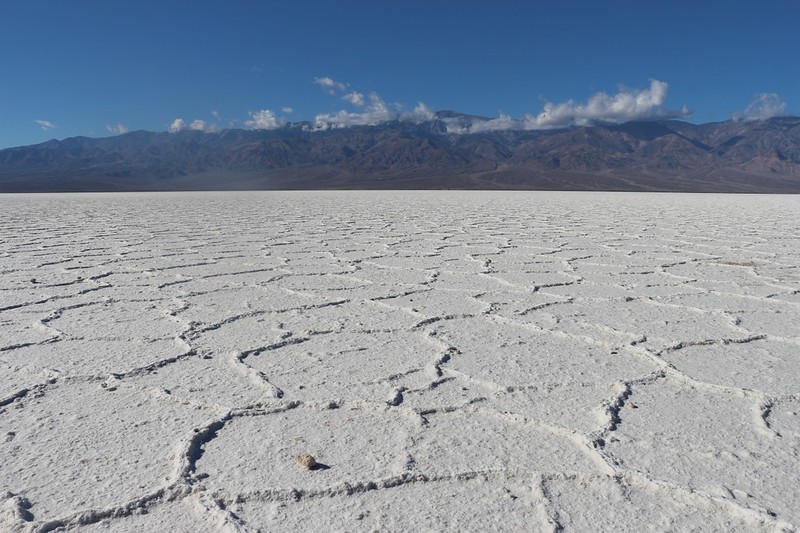 View toward Telescope Peak from the Badwater salt flats 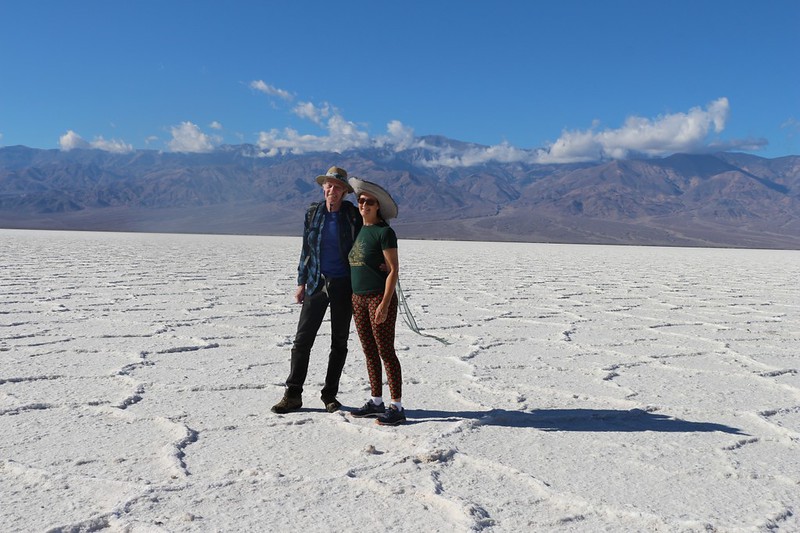 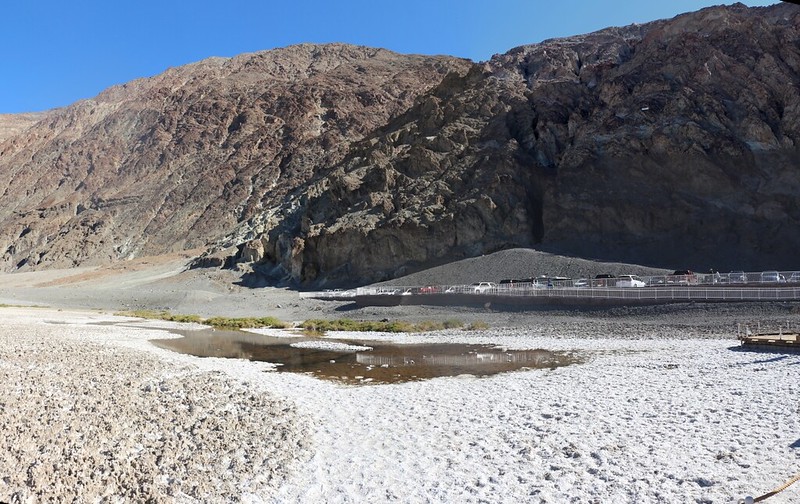 View of the bad water itself, with the tiny white Sea Level sign up on the hillside to the right

Panorama shot looking out over the Badwater parking lot, with the Panamint Range in the distance

We got back in the car and kept on driving.  Not much further north was a side road stating “Natural Bridge” and Vicki was all for stopping to check it out.  So we did.  We drove up the well-maintained dirt road and parked the car, then took a hike up a canyon to the bridge.  It wasn’t very far, an easy hike, although uphill.  We were glad that the weather was in the low 70’s – perfect for the desert.  The bridge itself was quite large, mostly a structure of dried mud or loose sandstone, nothing like the stone in Arches National Park.  But that was OK.  It was impressive enough, and we got another chance to get out of the car and stretch our legs. 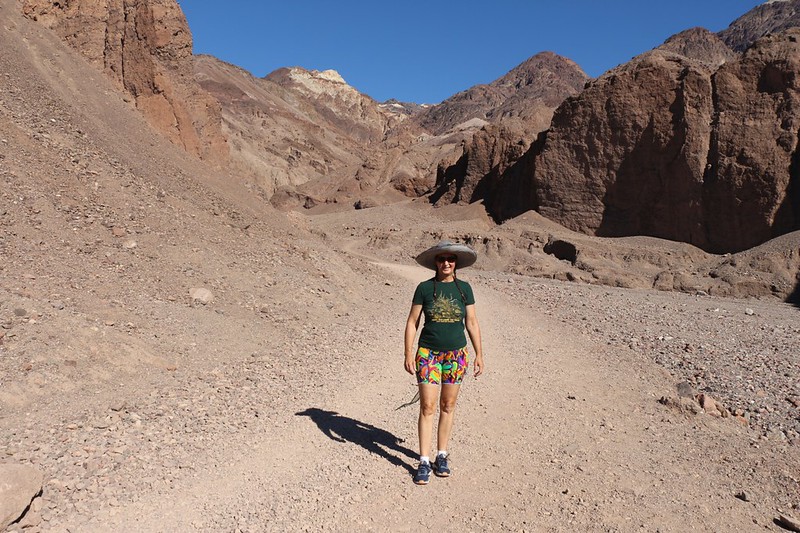 Heading up the trail toward the Natural Bridge 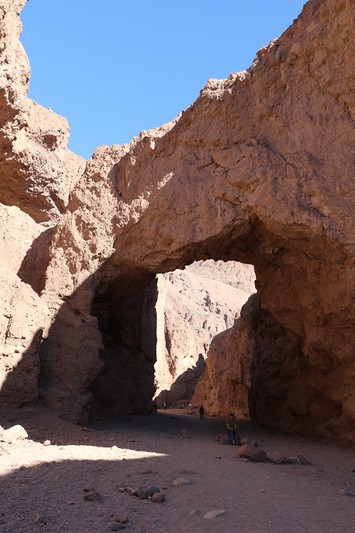 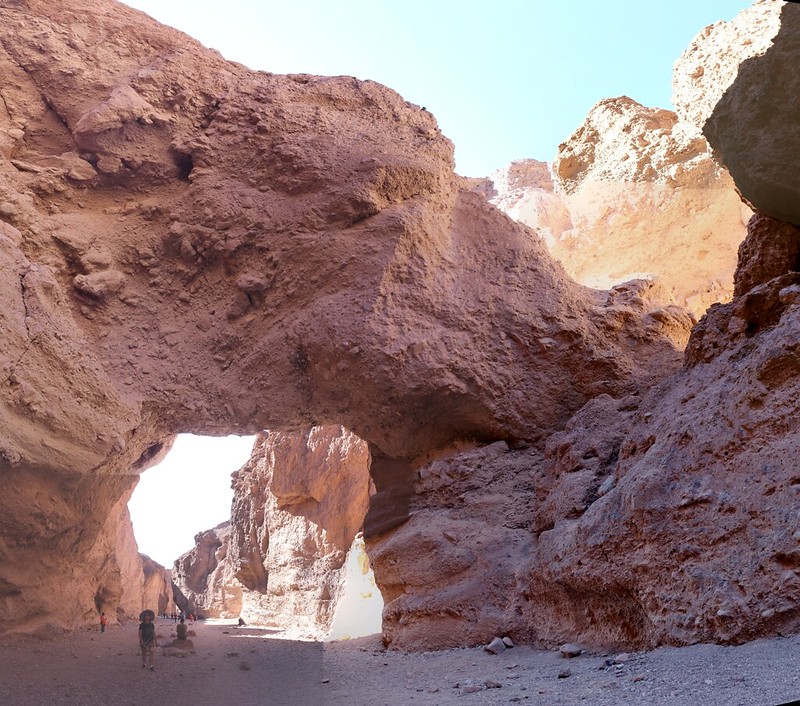 Stitched panorama view of the bridge from the upper side

After Vicki drove the rental car at a good clip down the dirt road, raising clouds of dust in her wake, we continued sedately north to check out Artist’s Drive.  This was a paved, one-way road that went winding into the hills to the east of Death Valley.  The Black Mountains were the backdrop, with layers of colorful mineral-laden soil showing through the eroded canyons.  We stopped at several pullouts to take photos.  Vicki loved seeing all the colors.  This was much more exciting than our usual gray sierra granite. 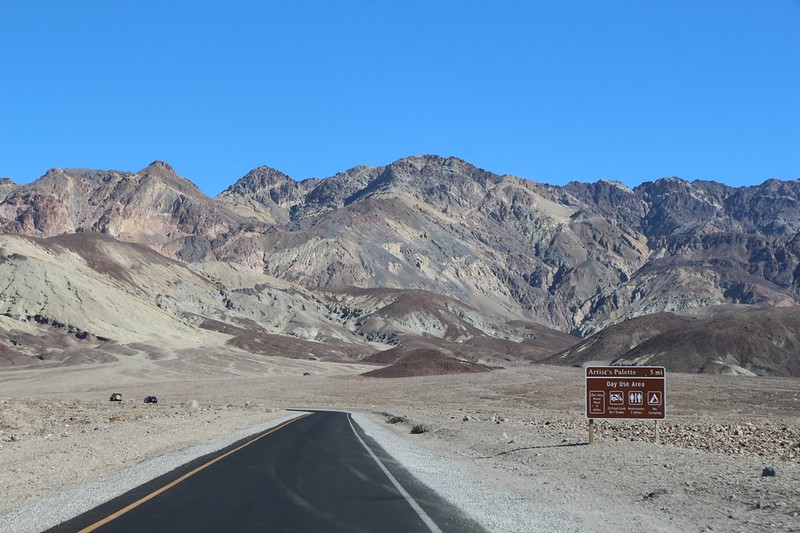 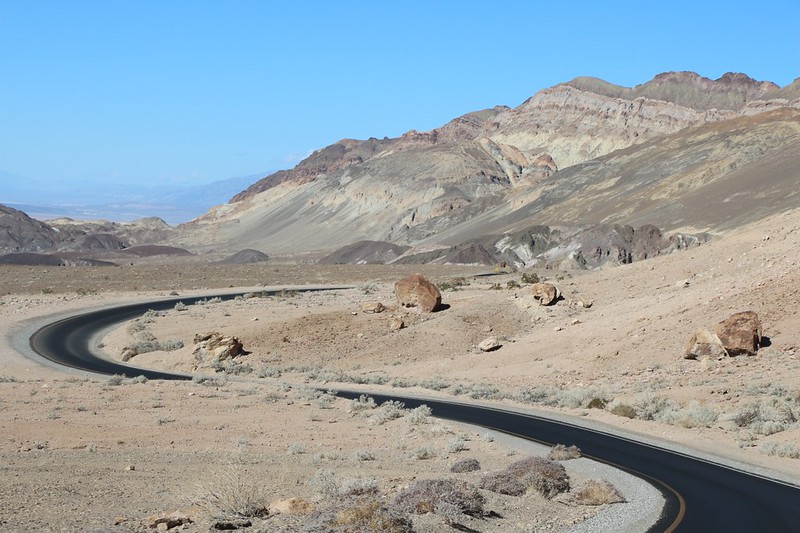 Curving roadway through the colorful hills 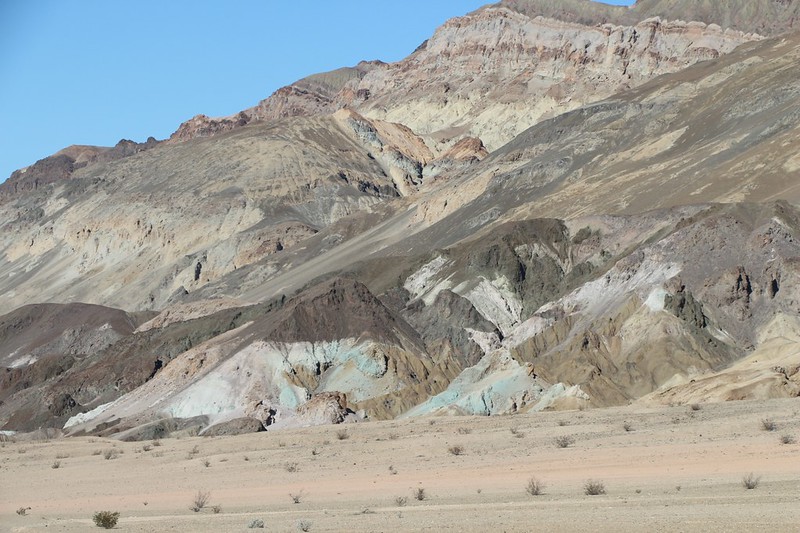 We decided that these mineral deposits would be much more colorful if they were wet from rain. Maybe next time!

We continued north to park headquarters, the Furnace Creek Visitor Center.  It was a busy weekend and parking was hard to find.  We entered the building and paid our entry fee, then checked out some of the exhibits.  Very educational.  I also asked where the slot canyon was that I’d read about on their website, the one that was so deep and dark that you needed a headlamp to walk through it.  It sounded quite adventurous.  The ranger gave us a handout for Sidewinder Canyon, and told us how to find the slot canyons on the south side.  Unfortunately, we had passed this canyon earlier that morning, before reaching Badwater.  Darn!  We certainly weren’t going all the way back there now, so we vowed to work it into our plans, four days from now, as we left the park. 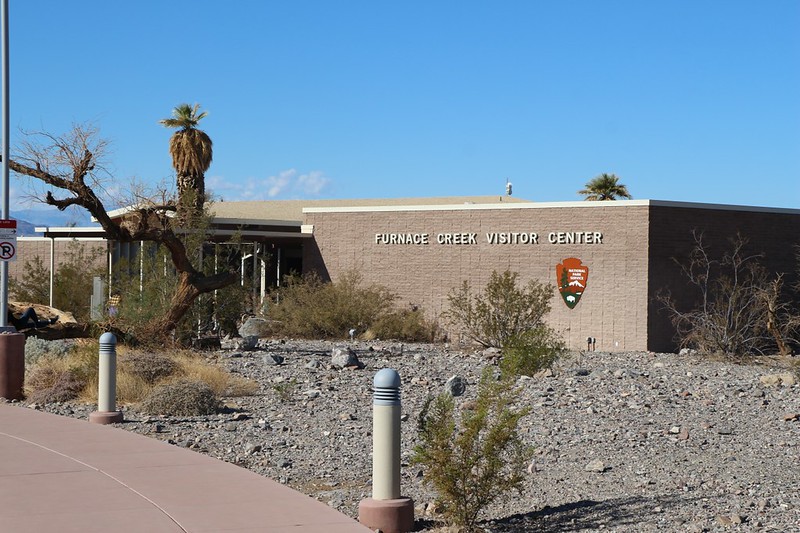 After that, it was Twenty Mule Team time!  We drove east on Highway 190 to the dirt road through Twenty Mule Team Canyon.  This was where they mined a lot of the borax back in the day.  Then we drove west to the Harmony Borax Works ruins.  This is where they purified and crystallized the borax.  It was also where they loaded the finished product into the huge double-wagons prior to hooking up the twenty mules who had to pull the load all the way to the railroad tracks in the Mojave Desert.  One of the original wagons was still there, baking in the sun.  So of course we had to take some more obligatory photos.  They were hardy men, way back when, stoking boilers in the 100 degree heat.  I’m glad I wasn’t one of them. 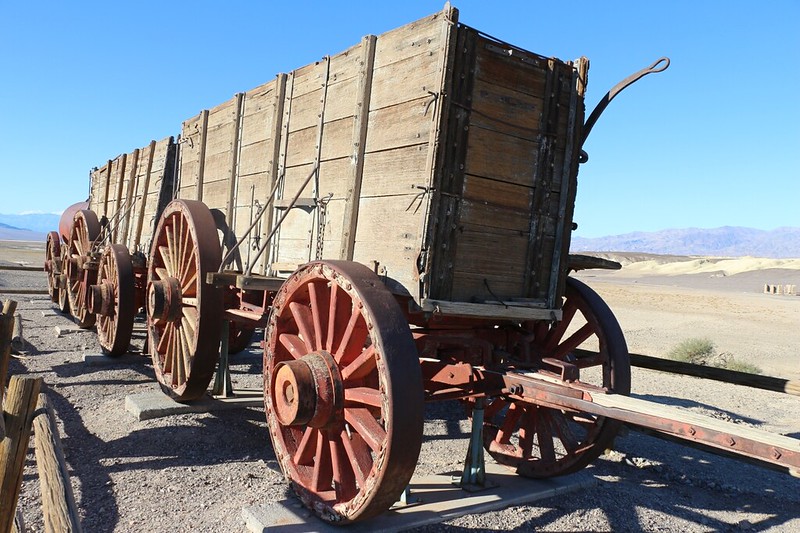 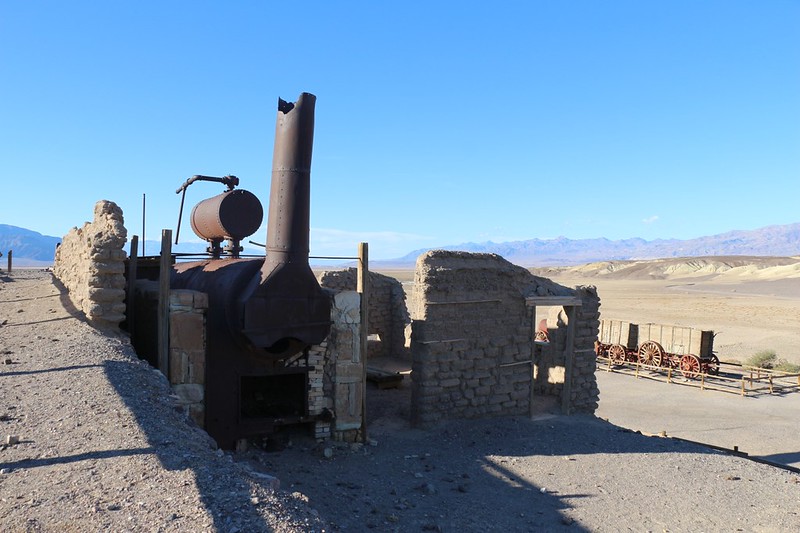 Old boiler where they purified the borax

At that point, we realized that the afternoon was waning, and we had a long drive in front of us if we were going to make it to Marble Canyon before dark.  We’d been looking at the map, and you could only camp for free in certain locations within the park, typically far from the highway, down long dirt roads, and never close to popular tourist locations.  So we got moving, north and west on Highway 190, twenty five miles to the village of Stovepipe Wells, where we filled up the gas tank and prepared for off-roading.  On the way, we saw the Mesquite Sand Dunes, but we had no time to explore them.  We vowed to do it the next morning. 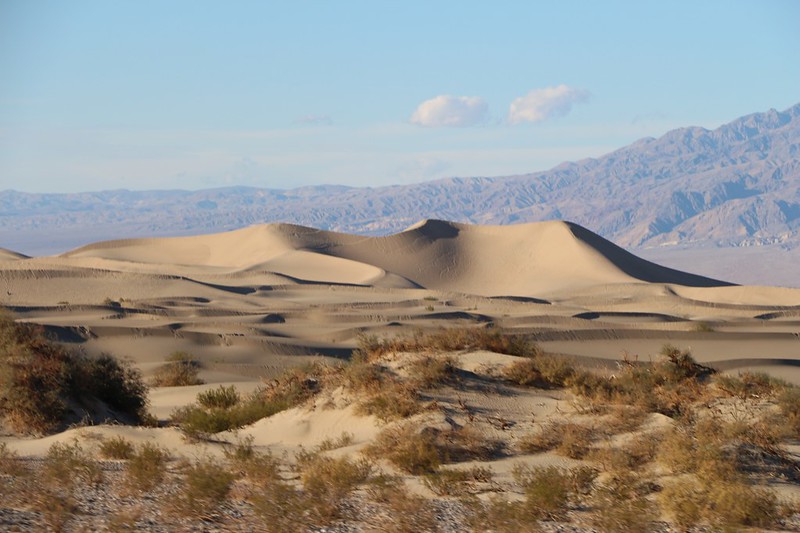 Now, we chose Marble Canyon as our destination because one of our friends remembered it fondly.  We had no idea what it would be like, but we weren’t worried.  It was in the desert, and the desert is beautiful.  But it looked like it would be fifteen miles of driving on a dirt road to get there.  And this was one of the reasons why we rented a car for this trip, a Toyota Rav4.  I was thinking of buying one (after plenty of online research), and we rented it specifically to see how it handled the rougher side of driving.  And car camping.  This entire trip was our test drive.

Vicki took the first turn on the dirt road, which drove dead straight across Emigrant Wash.  There was plenty of “washboard” on this road, and a decent amount of deeper sand.  The car did fine, and we drove directly into the glaring, setting sun, until we entered the shadow of the Cottonwood Mountains.  Then the road made a sharp right, heading for the drop into the Cottonwood Canyon wash.  Marble Canyon was on the right side, further up the wash.  We parked the car with some other sedans and walked ahead, because we had heard that the road was only suitable for high clearance vehicles from that point on. 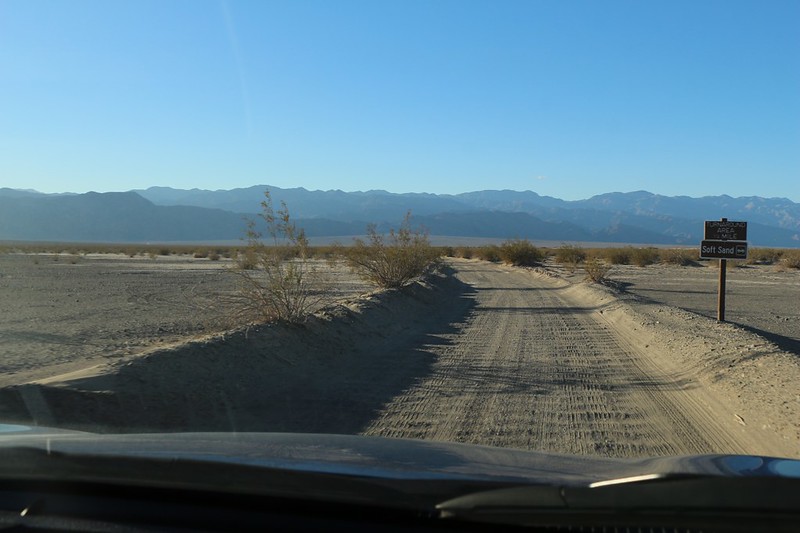 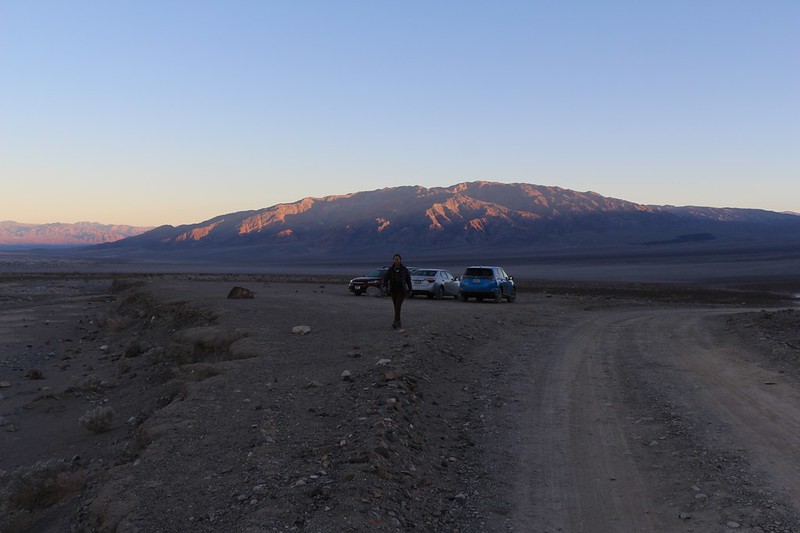 We walked for about five minutes up the wash before realizing that it didn’t look all that tough after all.  Maybe it would be worse later, but there was no point in walking right now.  So I went back and got the car, then picked up Vicki along the way.  This was one of the better decisions of the day, as the driving was fun, and the canyon was beautiful, with angled rock layers and a narrow section that was quite exciting.  An enjoyable drive.  We took the rough sections slowly, and only heard one or two “bonk” sounds as small rocks tapped the undercarriage of the car.  Oops!  Sorry about that, Mister Car Rental Company!  These things can happen when you let people use your four-wheel-drive vehicle.  But no real damage was done, so it’s all good. 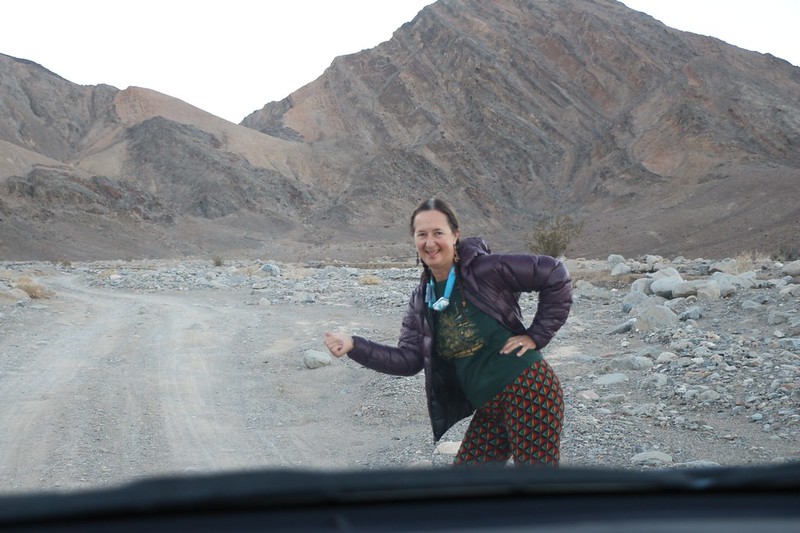 Cottonwood Canyon Wash wasn’t that tough after all, so I walked back, got the car, and picked up a hitchhiker 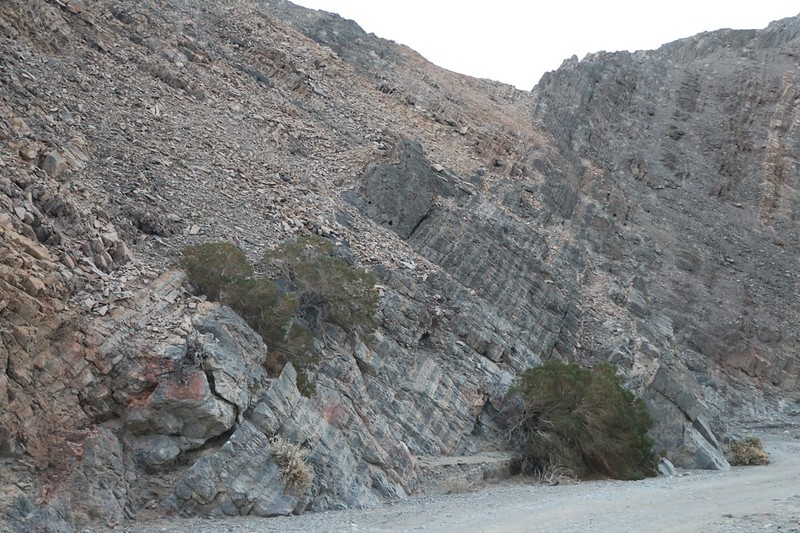 GoPro video as we drove through Cottonwood Canyon Wash 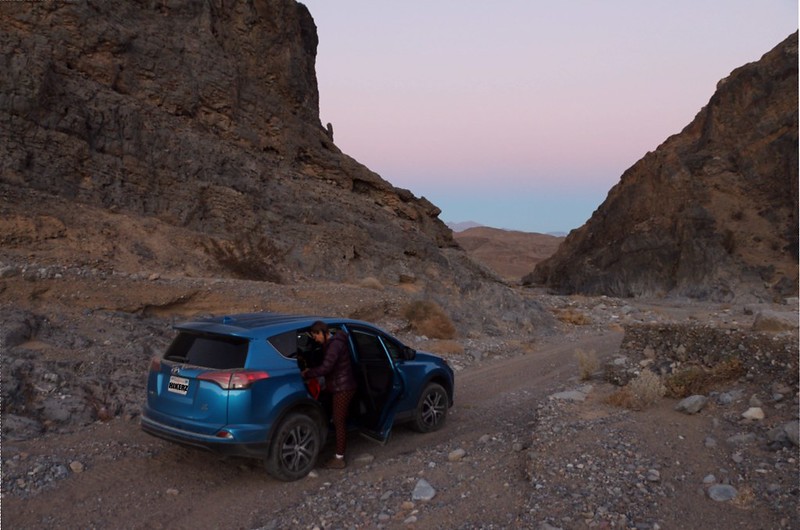 We made a right in Cottonwood Canyon and headed into Marble Canyon, where we found a spot to camp

The sun was already setting by the time we got to Marble Canyon.  The sky was pinking up and the hills were glowing with reflected light.  I started rearranging our camping gear while Vicki got out the stove and started cooking some dinner.

Part of our reason for renting the Rav4 was to test whether we could sleep in the back of it comfortably.  If I bought one of my own, I intended to use it when we arrived at remote trailheads in the dark, so that we could get a good night’s sleep before hiking at the crack of dawn, fully rested and ready for adventure.

So I blew a bit more air into the pre-inflated eight inch thick twin air mattress (a mere eight bucks at Walmart) and spread out the sleeping bag on top.  I put the rest of our stuff into the front seats.  By that time, dinner was ready, and we hung out on a rocky ledge near camp, reading our books and watching the stars come out.  Then we went to bed.

It had been an excellent first day in Death Valley.