Day 7 Summary: Hike up the Ireland Creek Trail, and camp at Evelyn Lake.

This day started out cold.  We were down on the bottom of Lyell Canyon, and the clear night sky’s radiational cooling led to frost all over the meadow.  We wanted to stay in our warm tent until the sun warmed everything, but we knew we had to do a lot of hiking that day.  So we put on some warm layers and went outside, and we were sure glad we did.  It turned out that the frost was beautiful, as was the mist rising off the lazy river.

But the best part of the entire morning was when we heard bells ringing in the distance.  We knew right away that it had to be the same herd of horses as last night, so Vicki grabbed her camera and ran out to the meadow to see.  And she had perfect timing.  This morning the horses were heading down-canyon, and they were on our side!  Vicki was absolutely overjoyed as the entire herd ran past her on the trail, many within arm’s reach.  Some were skittish, some didn’t care, and some simply hustled by.  And Vicki was ecstatic.  I think she glowed for several hours afterward.

After the horses were gone, it was my turn to get excited, and I took a ton of photos.  I took HDR shots, and wandered along the edge of the river looking for great perspectives and compositions and lighting.  Due to the intrinsic nature of Yosemite, my shots came out fairly well.  In fact, it was hard not to shoot a good photo here.  Credit where credit is due:  Thanks, Yosemite! 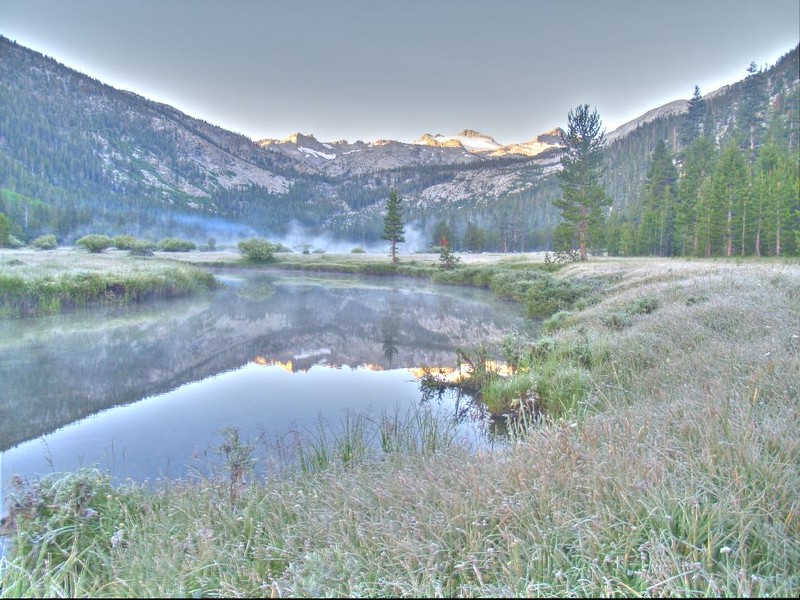 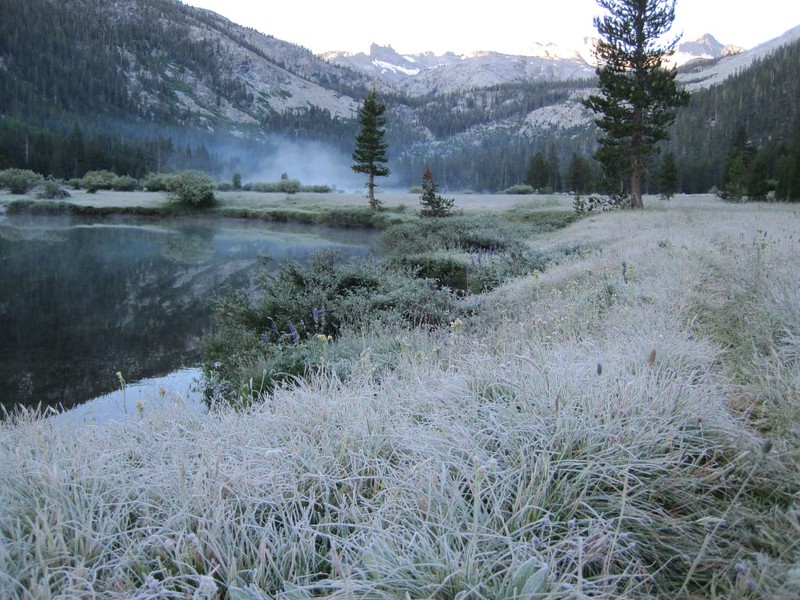 A frosty meadow and a misty Tuolumne River 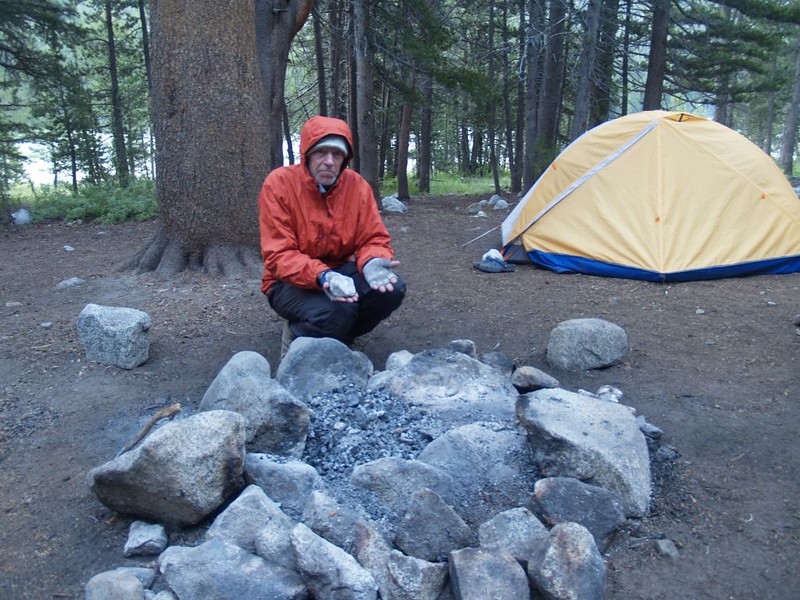 The fire is out but the rocks are still warm, making my hands happy

Mist rising from the river in the chill air of dawn 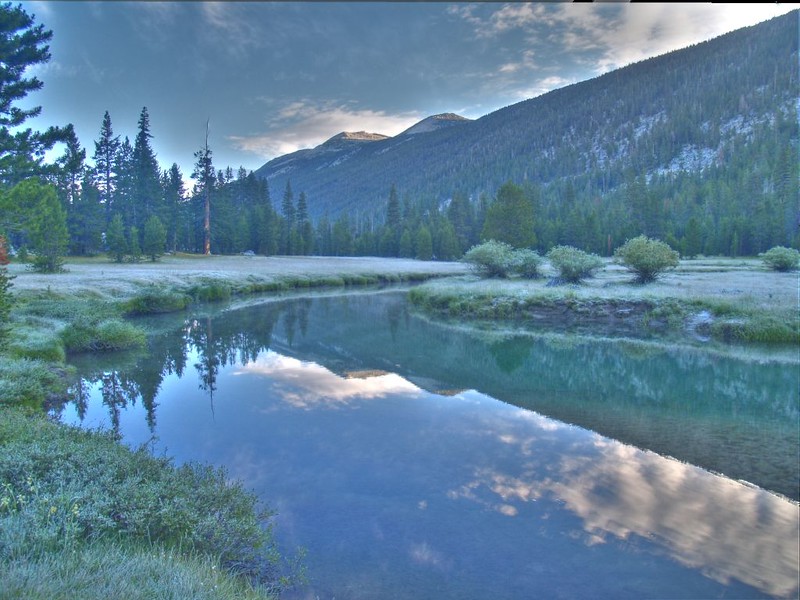 We finished packing and got on the trail.  Vicki was still wearing all sorts of layers as it was freezing outside, but I didn’t bother.  Once we were ready to don our packs I quickly stuffed my jacket away and got hiking to generate some warmth.  Vicki is stubborn and does it her own way.  Naturally, it wasn’t long before we had a bit of uphill hiking (combined with the sun rising higher over the ridge) and she was calling for a full halt.  Soon she was in the usual shorts and shirt, and the weather was perfect for hiking.

Lyell Canyon is mainly wide and meadow-filled.  The river winds lazily back and forth.  But there are sections in between the big meadows where the water runs fast through pine-forested slopes.  This juxtaposition makes the hike an ever-changing experience. 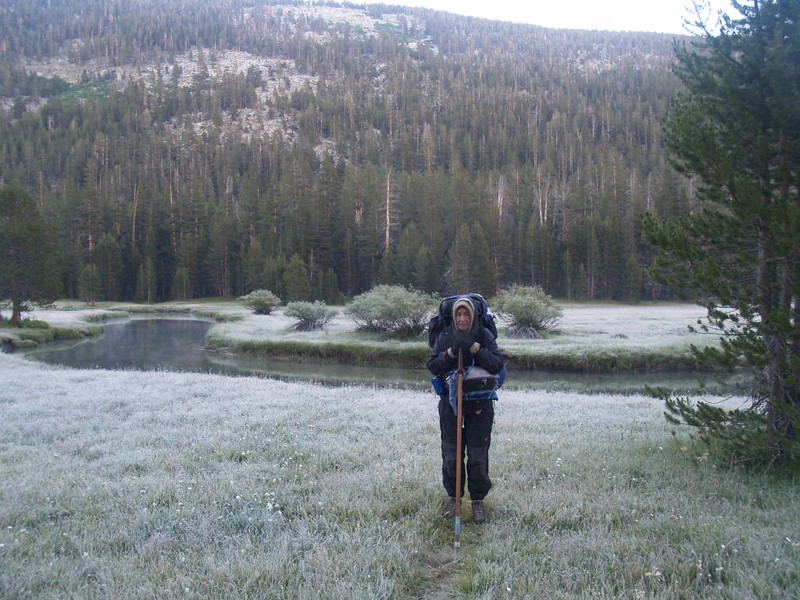 Vicki wears plenty of layers as she stands in the frosty meadow, ready to start hiking 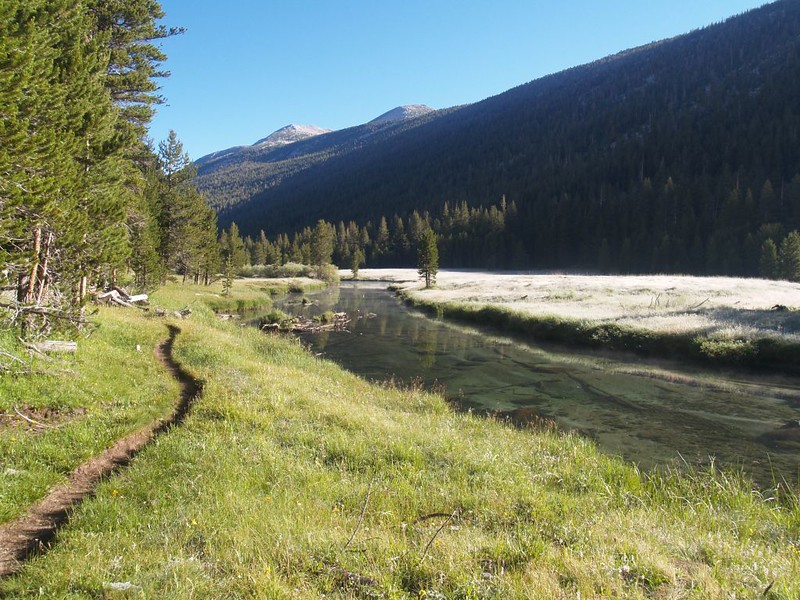 As the sun rises it works its magic, melting the frost 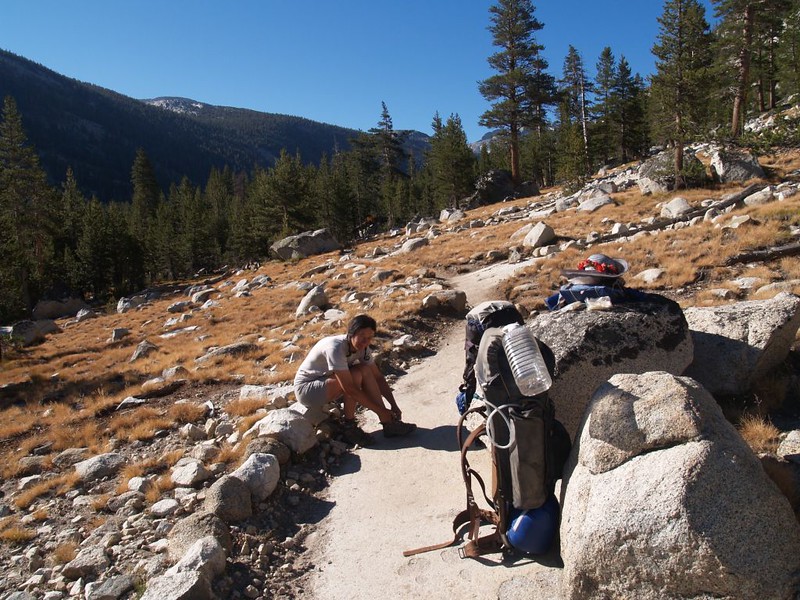 The temperature climbs rapidly and Vicki has to remove all those extra layers.

The river is cascading downhill in this section of the canyon

Stitched panorama of another huge meadow in Lyell Canyon 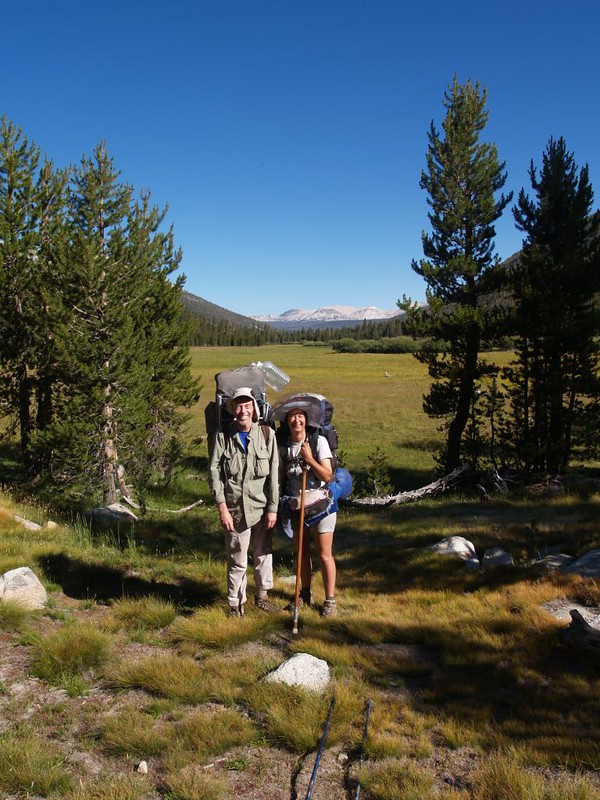 We posed for a photo near the head of a meadow 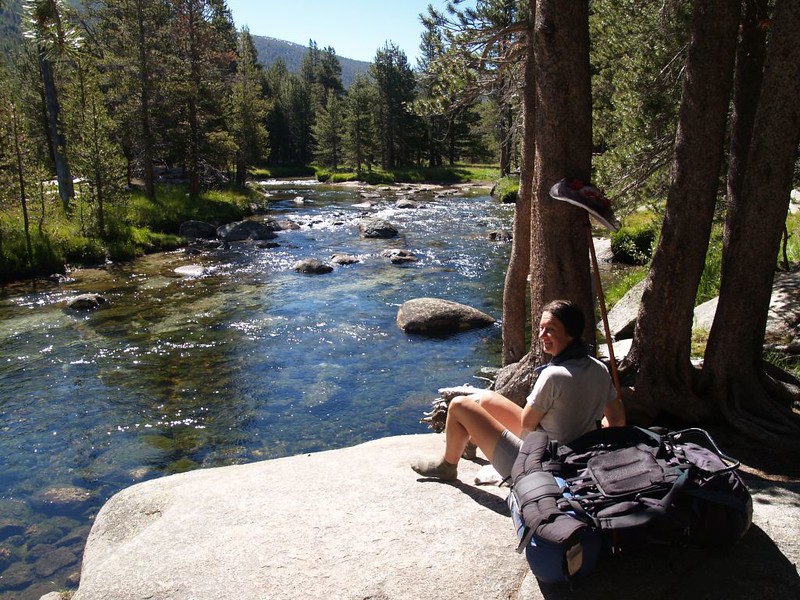 Taking a boot-off break and filtering some water from the river. Just another beautiful day in Yosemite!

Although it would have been pleasant to continue hiking all the way down the canyon, that also would have been the end of our trek.  We wanted to stay out a while longer, and see a few more places.  Therefore, our plan was to turn left, heading west, climbing up and out of the canyon via the Ireland Creek Trail.

Now, getting free of the canyon wouldn’t be easy, as it was quite deep.  In fact, we’d have to climb 1700 feet to escape it.  Amazingly, Vicki herself had come up with this insane plan many months ago.  Yes, the Girl Who Hates UP was proposing more UP!  Extraordinary, but true.  And today was the day to show the world that she could do it.  Three miles down, five miles to go.

We took an extended rest near the Tuolumne River, where we filtered water, ate some snack, had some caffeine, and aired out our hot feet.  Then we started the long grind uphill.  And it was very pleasant, with an easy slope, at least at first.  The forest was composed of many smaller pines, so it was shady and cool.  But there also wasn’t any breeze in there.  Those two factors may have cancelled each other out, so it was still sweaty work.

The trail paralleled Ireland Creek initially, but eventually the creek went one way and the trail another.  Then the ascent seemed steeper and the land much drier.  We missed the sound of water tumbling down nearby.  Meanwhile, Vicki kept hiking slower and slower.  I should have taken some of her extra weight, but neither of us thought about it, as the trail wasn’t overly steep.  It was simply very long.  The first three miles of the ascent to the Ireland Lake Trail junction took us nearly four hours, from 10am to 2pm, during the hottest part of the day. 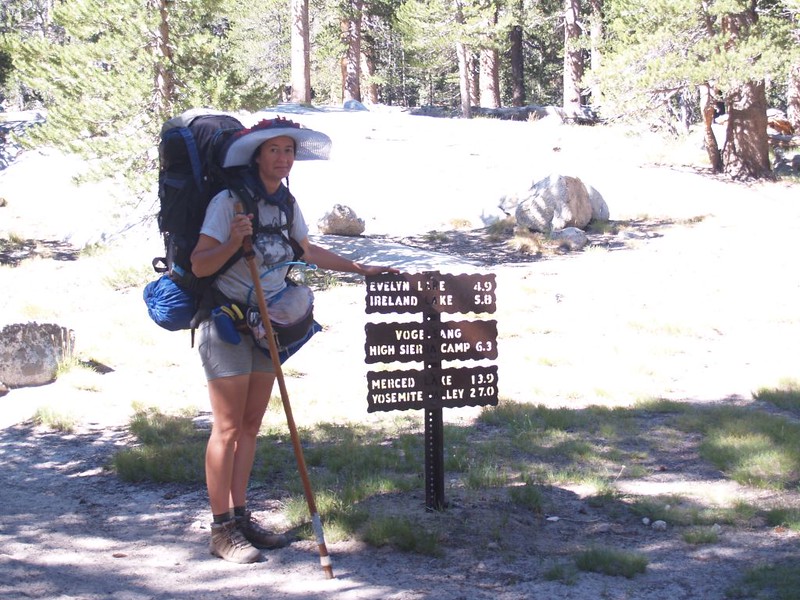 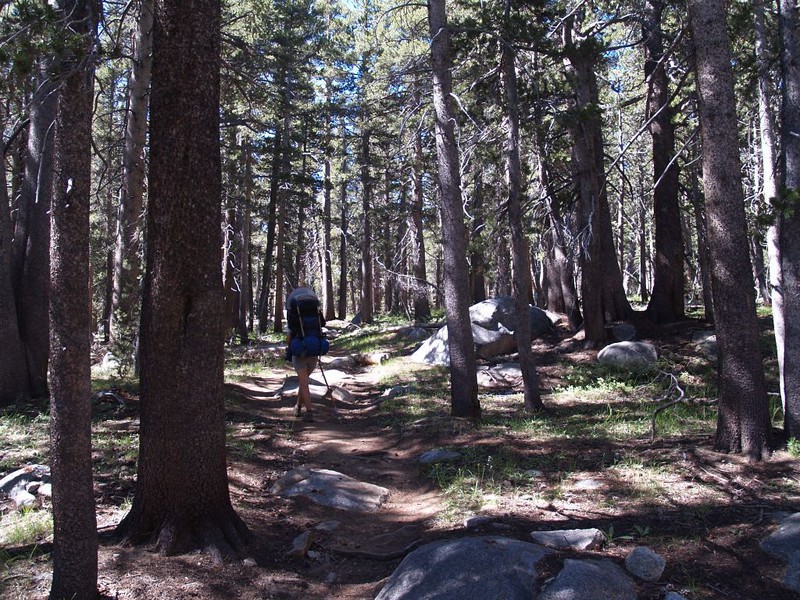 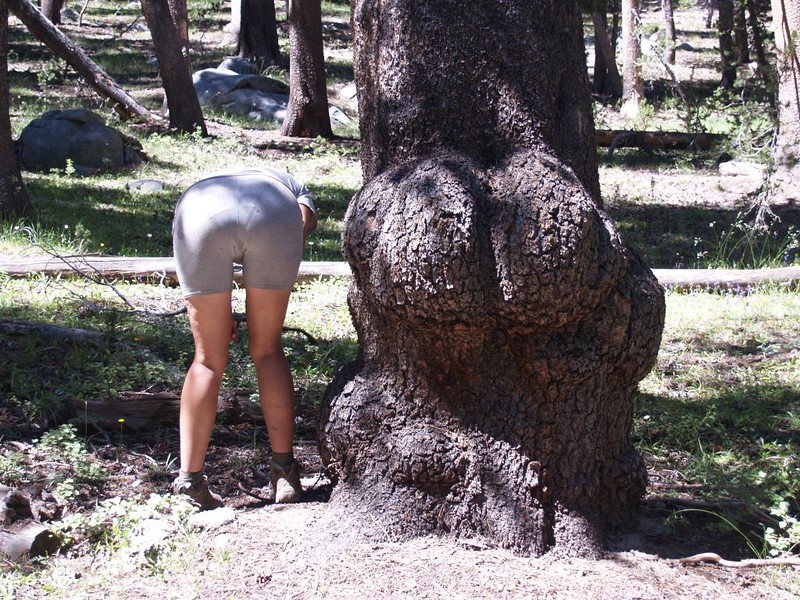 Vicki insisted that I take this photo 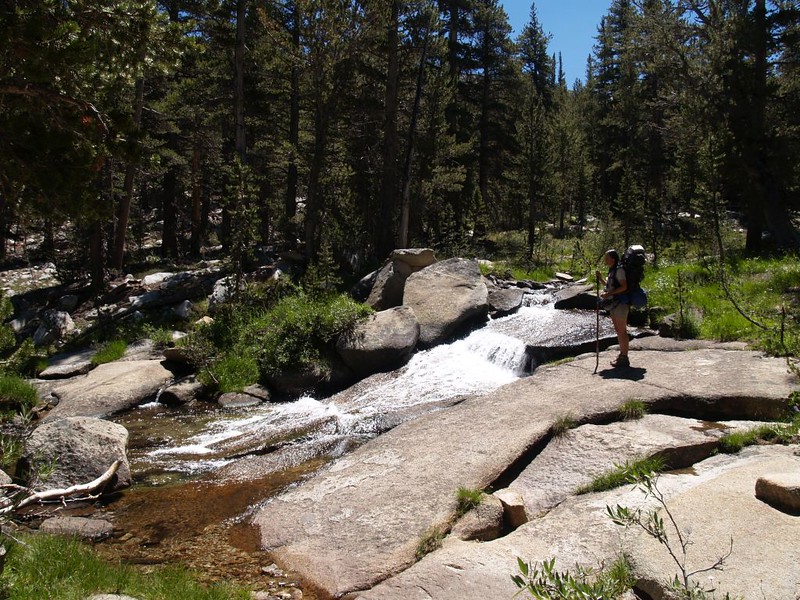 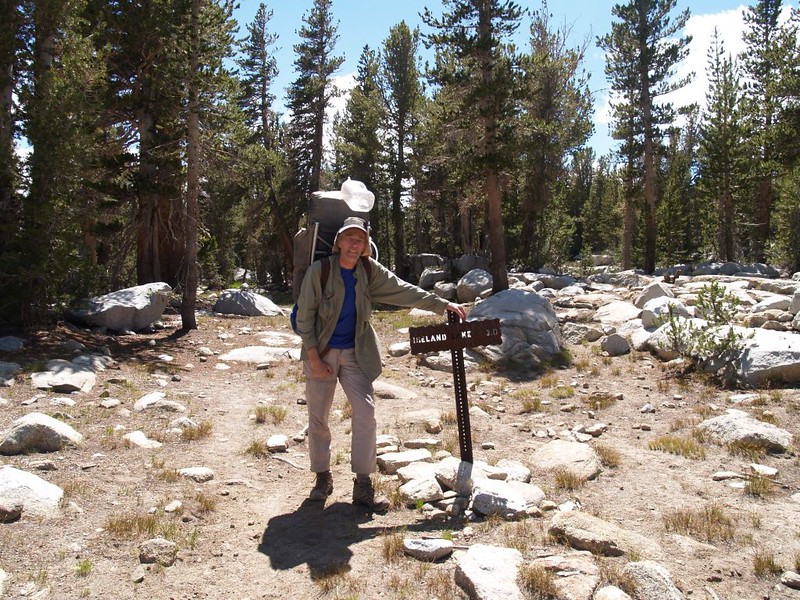 Me at the sign for the Ireland Lake Trail

At the trail junction, I was doing fine, but Vicki was a total zombie.  She’d given it everything she had.  Unfortunately, I made the mistake of telling her that we couldn’t possibly stop yet, that there was still another 0.8 miles and 200 feet of elevation before we reached the saddle at the top of the day’s climb.  This information was too much for Vicki.  She’d been running on empty for the last hour or so.  There was nothing left inside her.  And she had had enough.

This declaration exploded into the tranquil wilderness like a rifle shot.  I was taken aback.  She’d been so quiet, for so long, that I had forgotten what Vicki being this quiet truly meant.  I tried reasoning with her, to try and figure out what she wanted me to do, but it was no use.  Her words were all gone from her brain.  Except for “ramen” of course.

“You mean you want to start cooking noodles right here?” I asked.  This was not our usual lunchtime protocol.  “But we never cook food for lunch!” I foolishly added.

With one last “Ramen NOW!” she shucked off her backpack.  Using her fanny pack for a pillow, she flopped herself down on a big granite slab and promptly fell asleep.

Getting ramen noodles ready for immediate consumption was obviously MY problem.

Although it’s true that Vicki does all the cooking when we hike, it must hereby be stated that I am not altogether helpless.  I, too, can boil water in a pinch.  So I opened Vicki’s pack and got out the tools of the trade.  I set up the stove and lit the flame.  I poured a suitable amount of water in the pot and put it on the stove.  Then I dug into the bear can and extracted her secret stash of ramen noodles.  I didn’t bother with waiting for the water to boil; I simply tossed the block of noodles into the pot and replaced the lid.  I’d let Vicki choose what flavor (beef or chicken) to add when they were ready.

And then I grabbed my book and read it for awhile, glancing occasionally at Vicki to make sure she was OK.  Poor Vicki.  She tries so hard.  I turned off the stove after it had boiled for a minute or two.  The noodles would get soft as it cooled.  I got out some water, ibuprofen, and caffeine.  She’d need those, as well.  Then I woke her gently.  The nap had helped a lot.  Her batteries had partially recharged.  Enough to eat ramen, at any rate.  And eat it she did.  She waved off the flavor packs and started wolfing it down.  She paused long enough for the ibuprofen and caffeine, then continued until the noodles were gone.  She didn’t offer me any.

Then she lay back down and went to sleep again!  I’d have to wait patiently for the ramen-magic to achieve its full effect.  So I put away the stove and relaxed with my book once more. 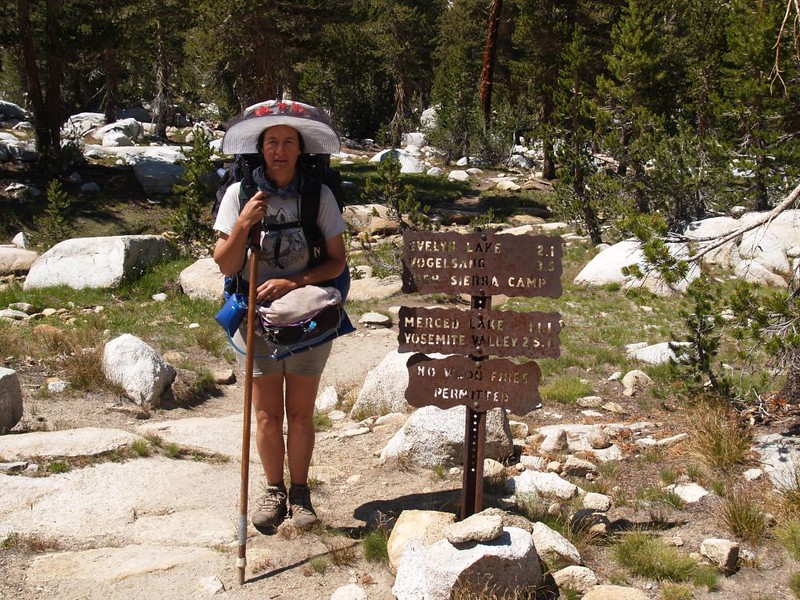 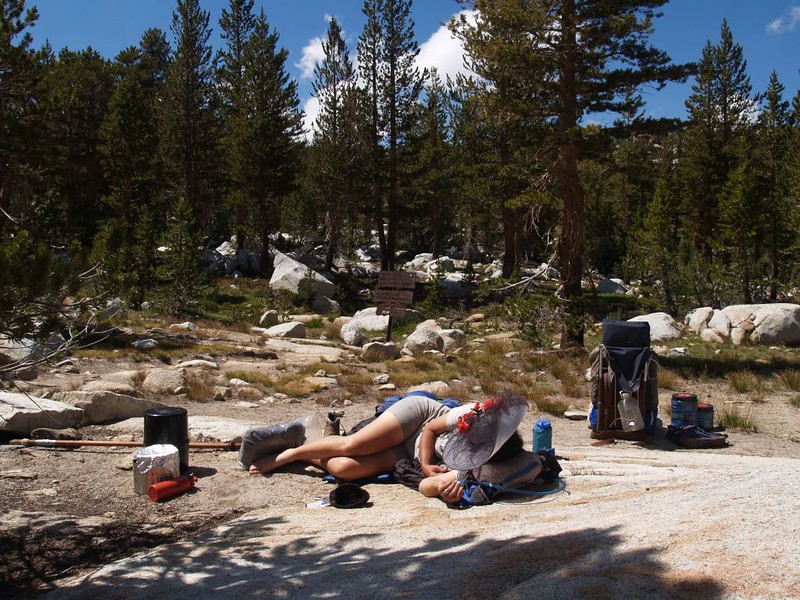 The ramen is cooking while Vicki takes a much-needed nap 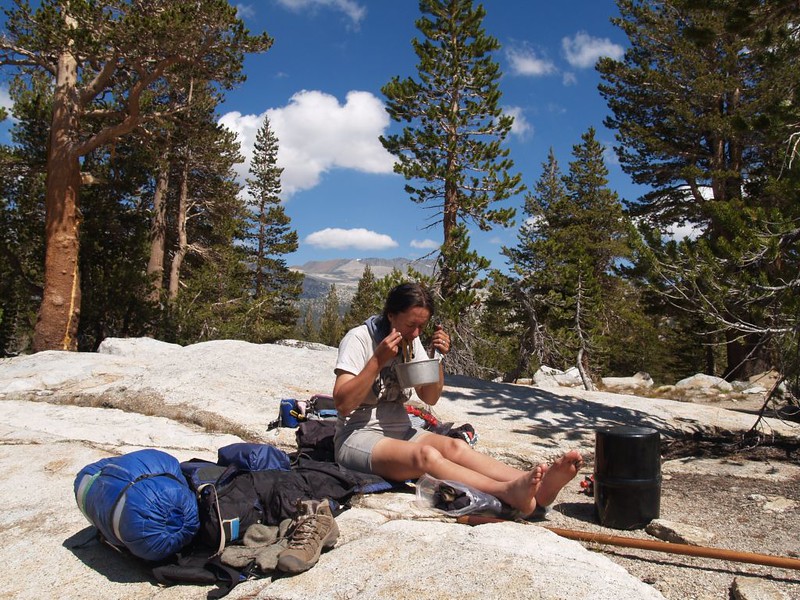 Vicki woke up fully charged.  She was feeling much better.  We got ourselves ready and started out on the final three miles of the hike.  We climbed to the high point and enjoyed the views both east and west, but we didn’t rest there for long.  It was another mile and a half to Evelyn Lake, and we wanted to get there right away.  Taking off the big packs and relaxing in the tent sounded like a great idea.  So on we hiked.

Looking east over Lyell Canyon to the Kuna Crest, from Mammoth Peak to Kuna and Blacktop Peaks 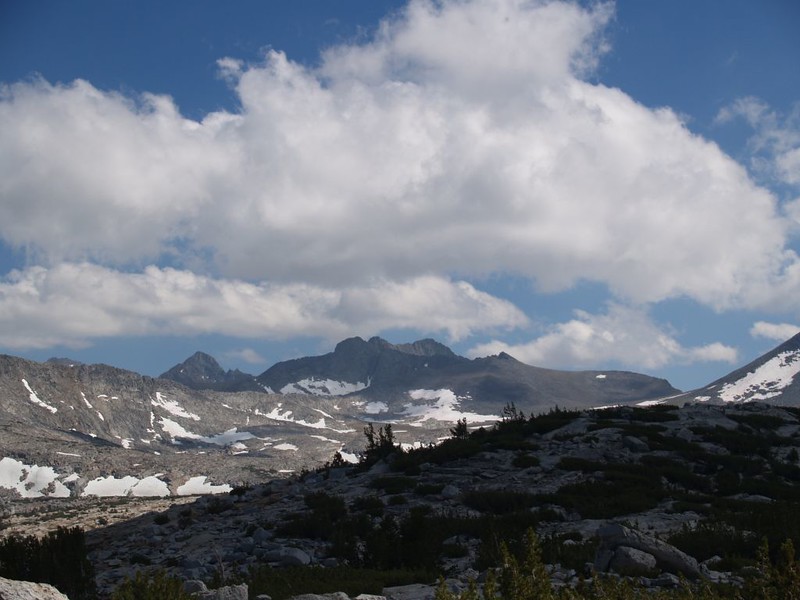 Cumulus clouds and shadows playing over the mountains 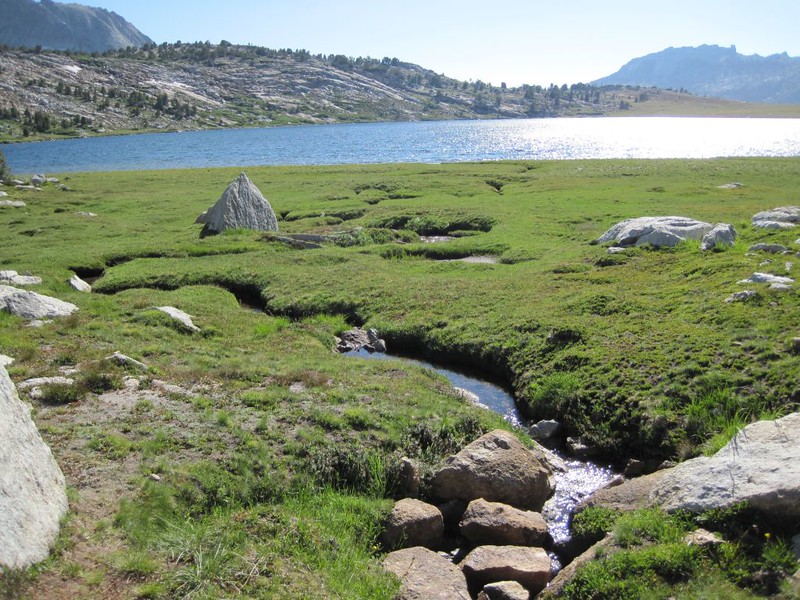 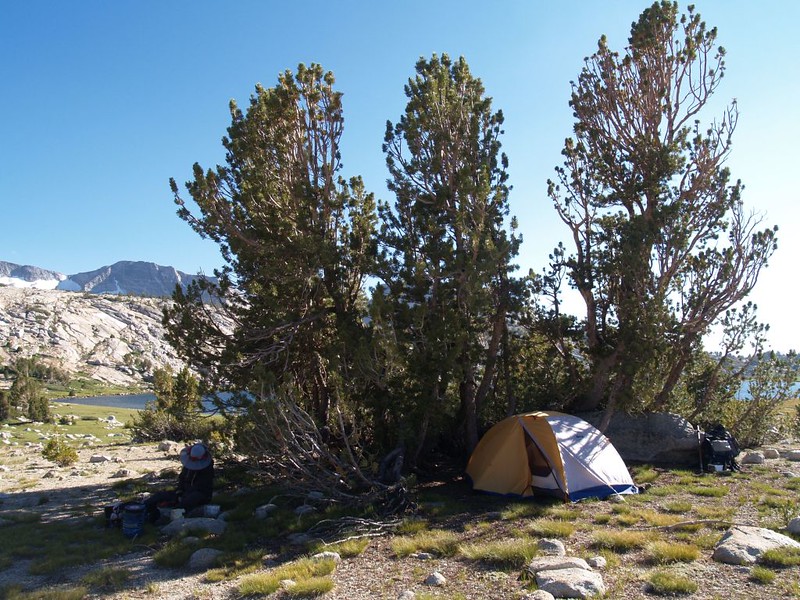 We set up our tent in the shelter of these Limber Pines to get out of the relentless wind. Vicki cooks dinner on the left.

Evelyn Lake was unlike other parts of Yosemite that we’d been to before.  It was high, at 10334 feet elevation, but the area seemed drier.  It was very tundra-like, with only a few stunted trees, on a high flat plateau that allowed the winds free play.  There were an infinite number of equally windy spots to camp on, each one of which would be perfectly horrendous for setting up a tent.  The least windy spot was behind a wall of pines.  True, we wouldn’t have a view of the lake from inside the tent, but maybe the lack of wind would make up for it.

We filtered water, we cooked and ate dinner, and we wandered around taking photos for a while.  The usual things.  But we didn’t do it for long.  It had been a serious day of hiking, we were very tired, and the wind was getting colder every minute.  We retired to the tent and got warm within our sleeping bag.  We read our books as the afternoon waned into evening.  And then we fell asleep.

For more Day 7 photos and videos see my Flickr Page.