This was the final day of our week-long trek, and all we had to do was climb over Kearsarge Pass and walk all the way down to Onion Valley and our car.  We were only a mile or so from the pass, but it entailed almost 900 feet of elevation gain.  After that, it would be five miles and 2600 feet down to the trailhead.  The downhill part was OK in Vicki’s book, but the uphill part was not.  As usual.  She hates uphill.  Unless the weather is cool, that is.  Then it’s almost tolerable.  So, once again, we woke up in the dark, at 4am, and started packing all our gear. 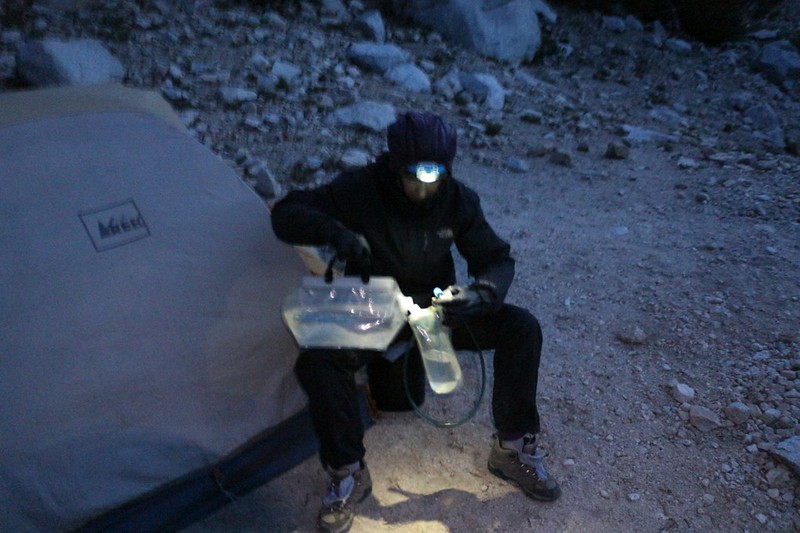 We woke up extra early, at 4am, in order to climb over Kearsarge Pass while it was still cool 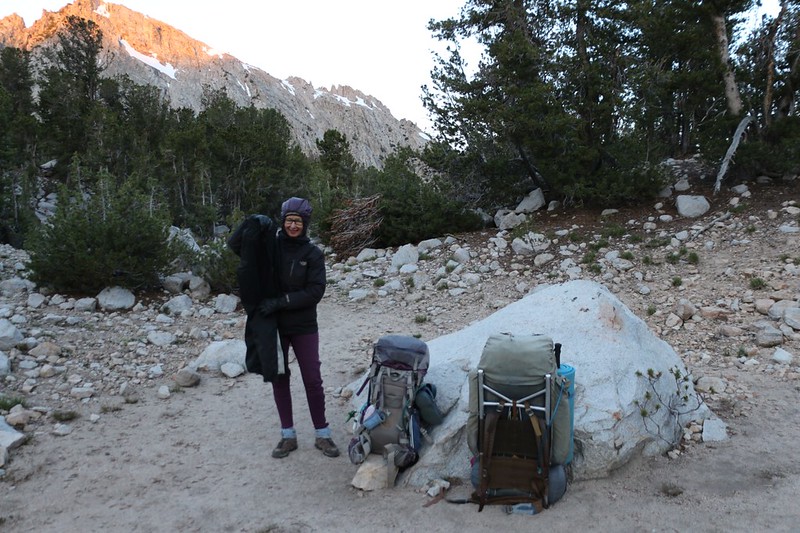 We had a plan, which was to eat one of our no-cook breakfasts (for a fast start), and leave before dawn.  We’d be climbing up the western face of Kearsarge Pass, and we knew that we’d be in shadow as the sun rose, which would make Vicki happy.  And it did!  She was perky and hiking steadily uphill in no time.  The air was cool and so was she. 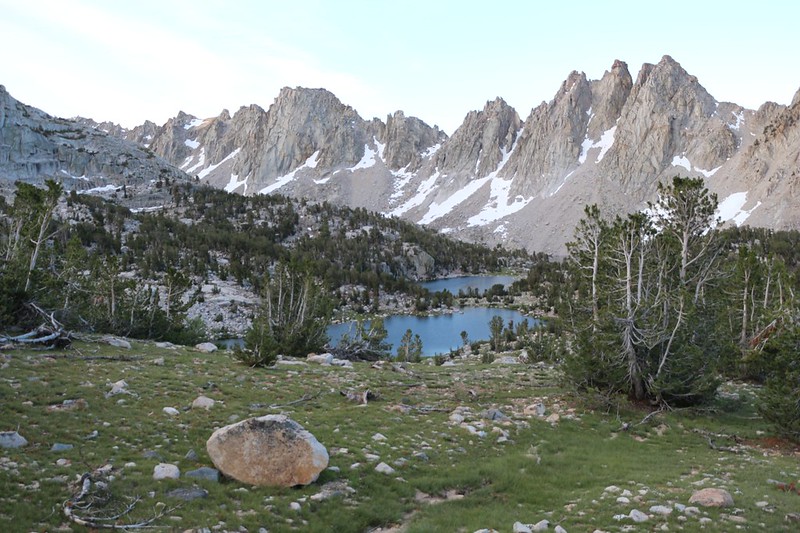 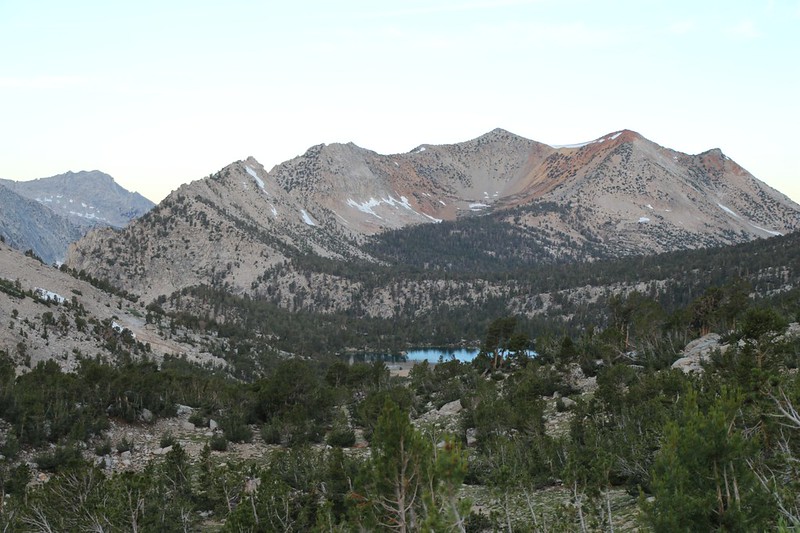 Mount Bago and Bullfrog Lake from the Kearsarge Pass Trail

The views kept getting better as we climbed, and I took way too many photos of the Kearsarge Lakes and Basin.  It was a lovely morning, and there were even a few high clouds to make the photos better.  As a photographer, I had grumbled a bit the last few days because the skies were so unremittingly clear and blue, but I knew in my heart that we’d been blessed with perfect weather this entire trip.  I wouldn’t have traded it for thunderstorms, and that’s a fact.  But just the same, a few high cirrus clouds would have been nice.  And I got my wish this final day. 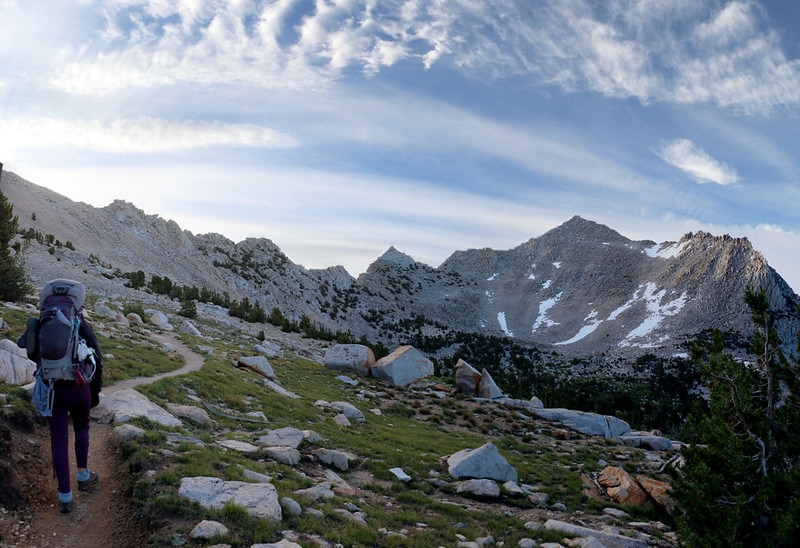 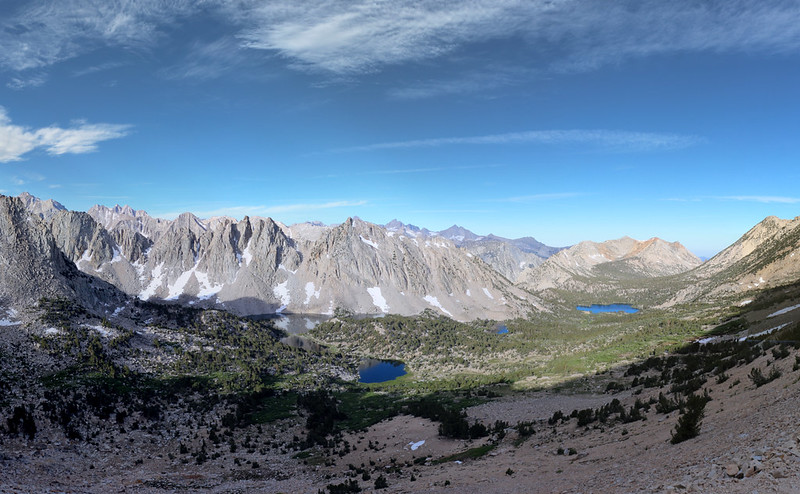 By the time we neared the top of the pass, the sun had reached our campsite, far below, but we were still hiking in the cool shadow of the Sierra Crest.  In fact, the air was cold enough that Vicki never even peeled off her outer layer, and we were, once again, the first hikers to arrive at the pass. 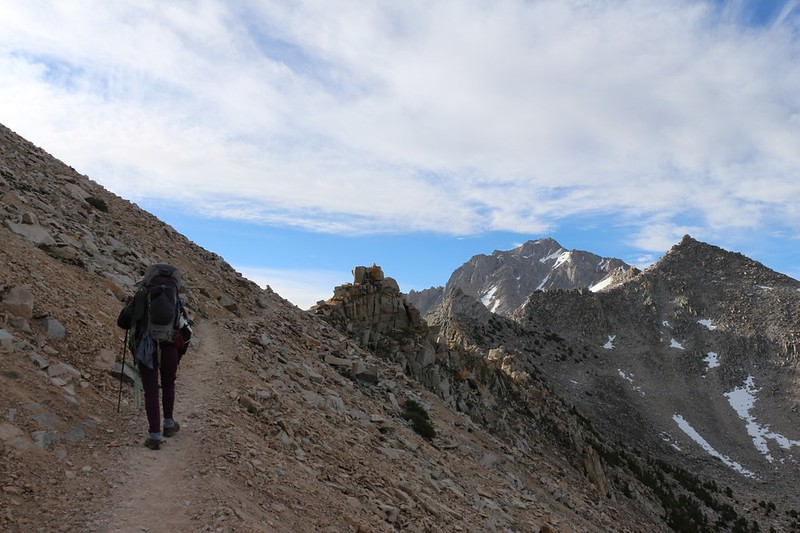 It’s just before 7am and we already made it up to Kearsarge Pass! 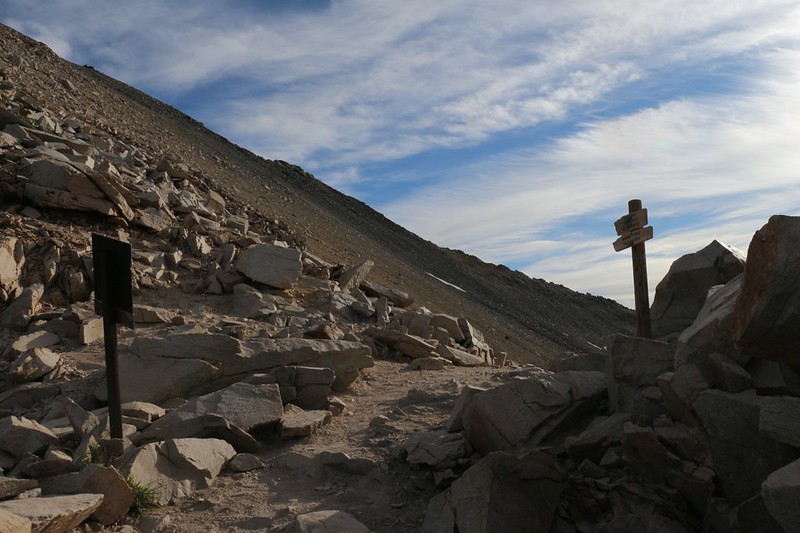 The trail signs at Kearsarge Pass in the early morning light

We had the place all to ourselves, and we took a break to fully enjoy the views.  I took several panorama photos and videos.  I was really enjoying the clouds and the morning light.  We looked back into the Kearsarge Basin, and recalled all the places we’d hiked this past week.  And then we said good-bye (for now) to Kings Canyon National Park.  SEKI is an awesome place.  We knew we’d be back again another day.

Then we picked up our packs and faced toward the east, into the John Muir Wilderness.  It was all downhill from here. 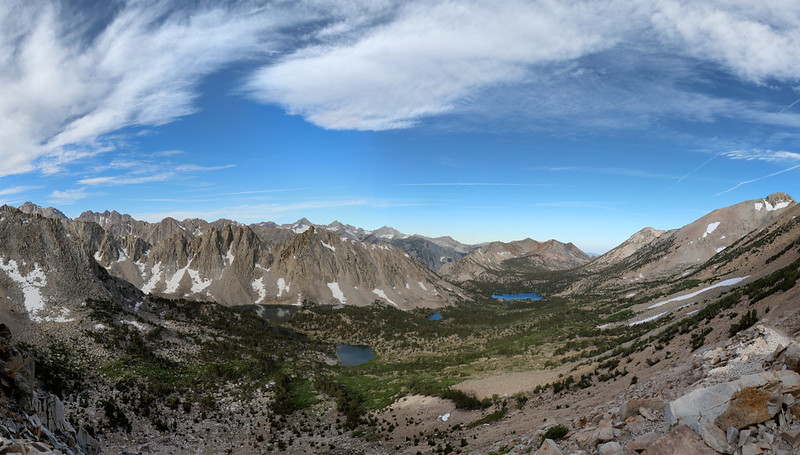 GoPro panorama video from Kearsarge Pass – what an excellent spot! 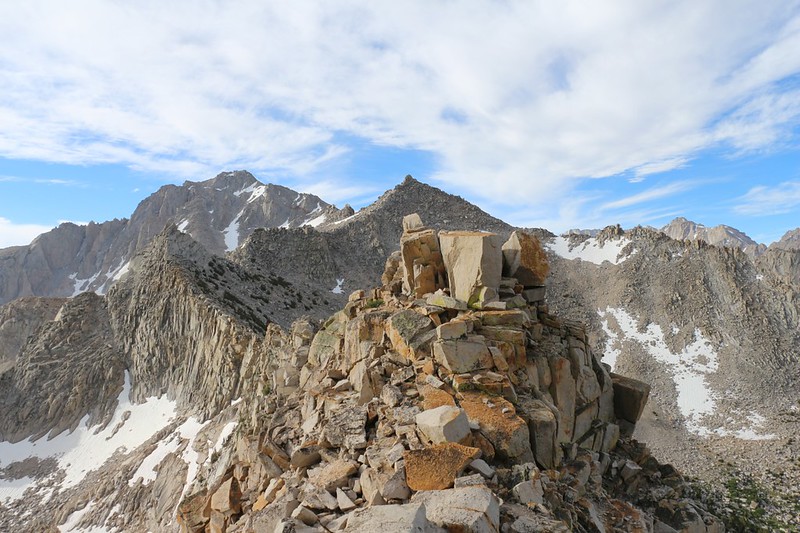 View south along the rocky ridge of the Sierra Crest at Kearsarge Pass, with University Peak and Peak 12423 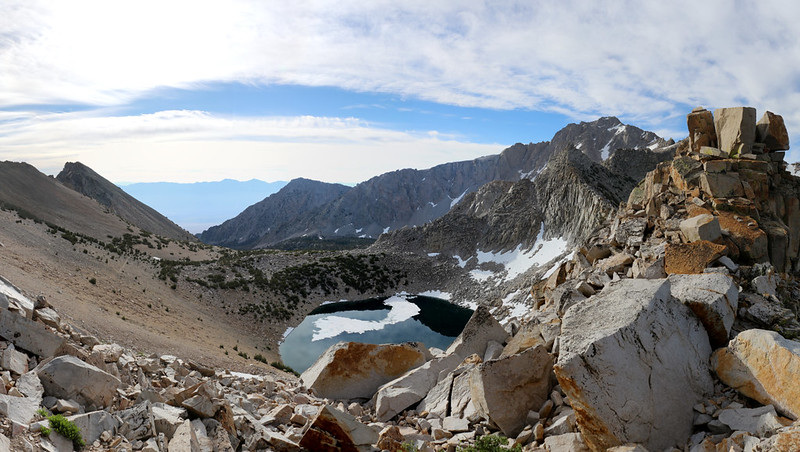 It may have been downhill, but we still had five miles left to hike.  We decided to enjoy the last few hours of our trip as best we could, taking in the views and breathing that clean mountain air.  It wasn’t difficult to do.  As the sun rose higher, the air got warmer, and the layers of clothing came off.  Soon enough we were hiking along like normal, resting in the shade and grateful for a cooling breeze.  But at least we weren’t grinding back up this slope.

We passed by Big Pothole Lake and Heart Lake, and headed down across the small snow patches that we’d seen on the way up.  And this time the snow was slushy and we didn’t need our Microspikes.  We made good time. 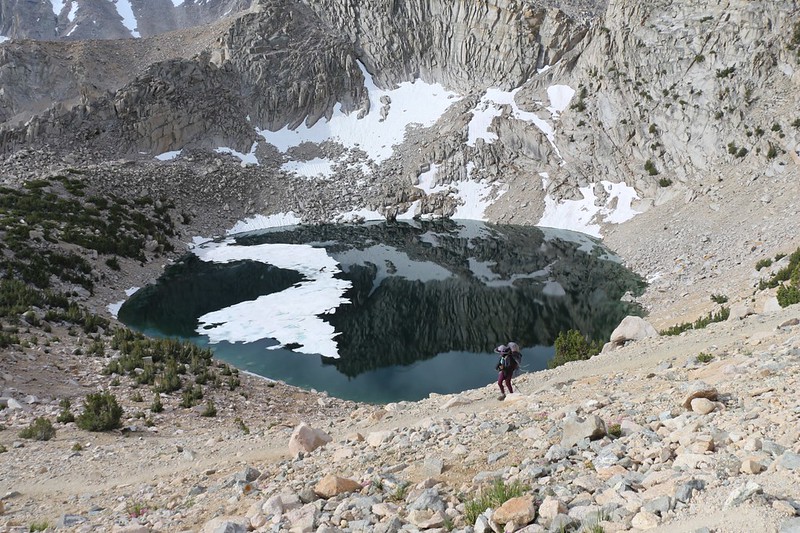 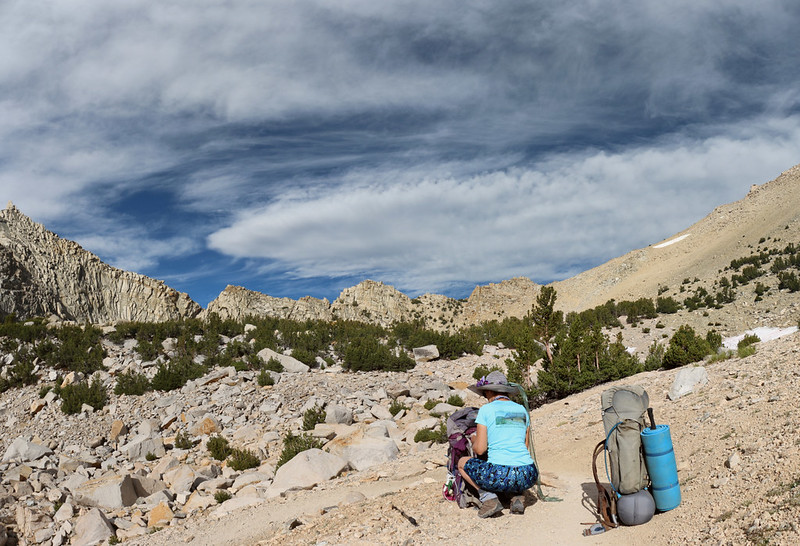 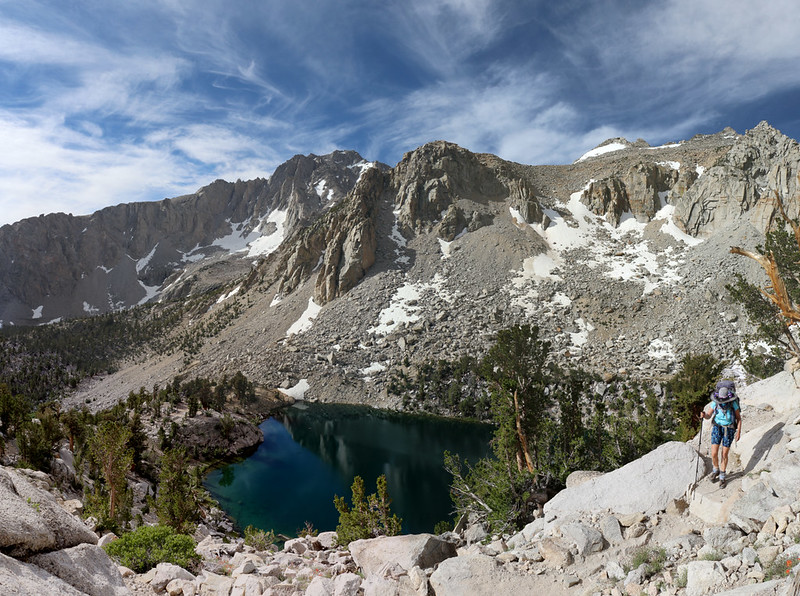 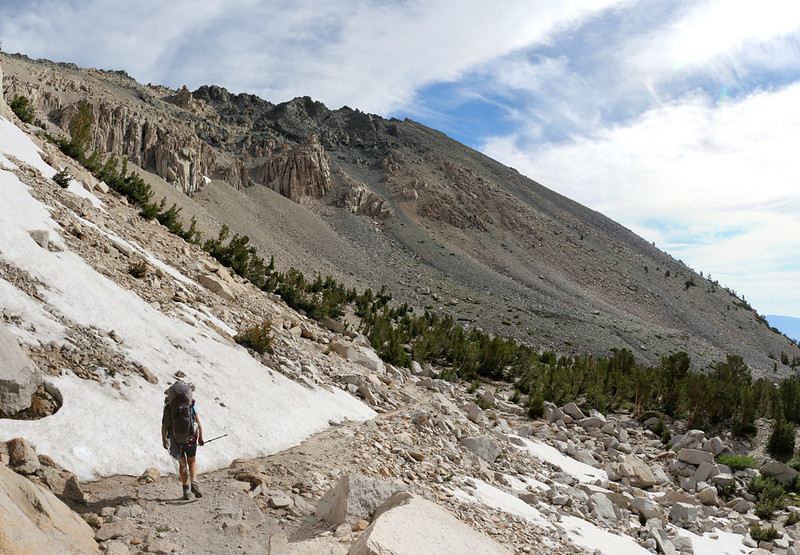 We took a detour when we reached Flower Lake, because Vicki wanted to see the “Troll’s Head” that she remembered from when we were here years ago.  It turned out that someone (or maybe the Winter snows?) had knocked down all the teeth!  So we set about replacing them.  Then we hiked around to the other side of the lake to make sure that they were visible.  Vicki was quite pleased. 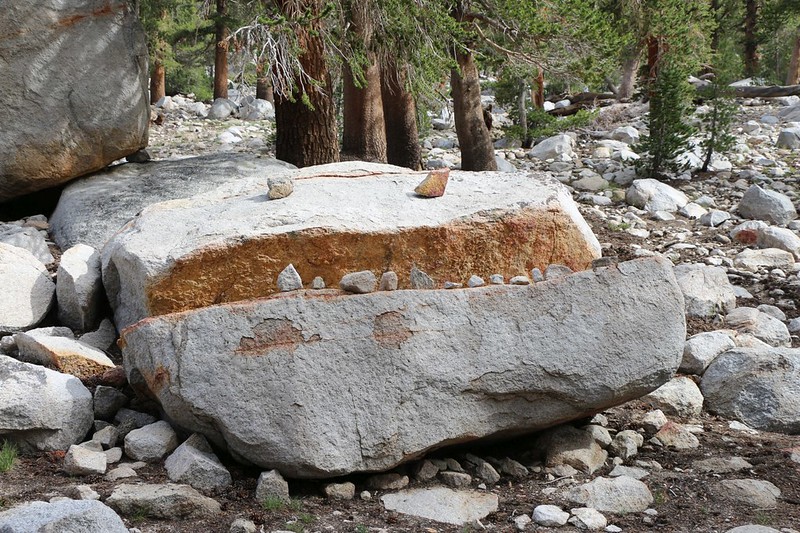 Whimsical Rock Monster on the northern shore of Flower Lake

After a short break, we continued past Gilbert Lake and then headed down the switchbacks to Little Pothole Lake.  We stopped to turn on our phones near the talus field east of Gilbert Lake and received some texts from friends and family.  And we returned a few, too.  It seemed that Civilization was reaching out its claws to drag us back to reality.  But we didn’t really mind, and we imagined that our grown children were relieved to find out that we had survived a grueling week in the Wilderness.  Imagination is a wonderfully deceptive thing. 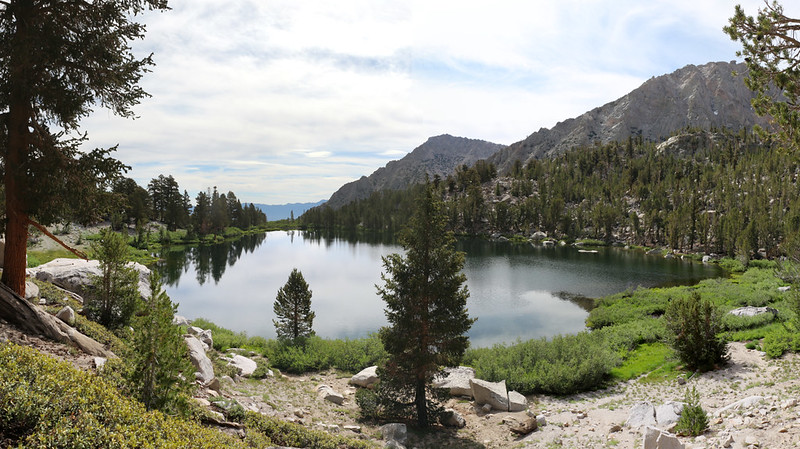 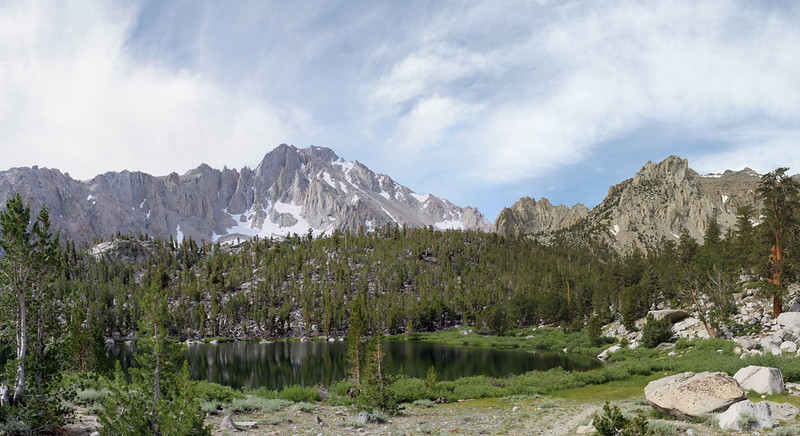 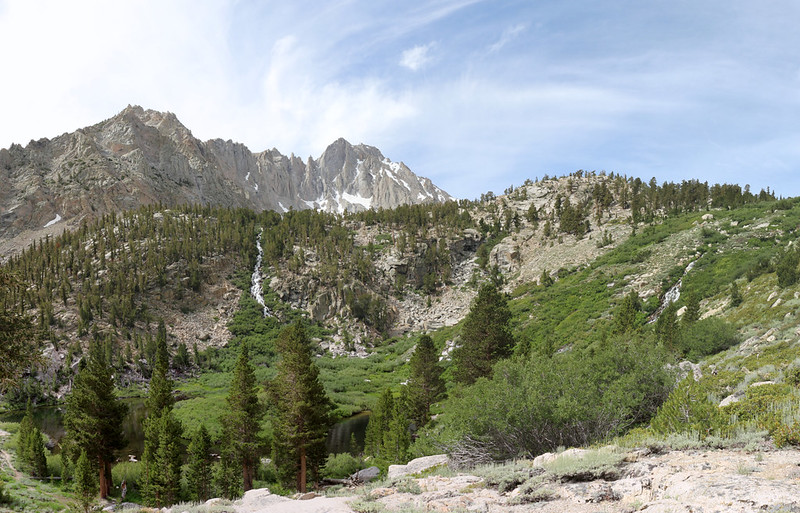 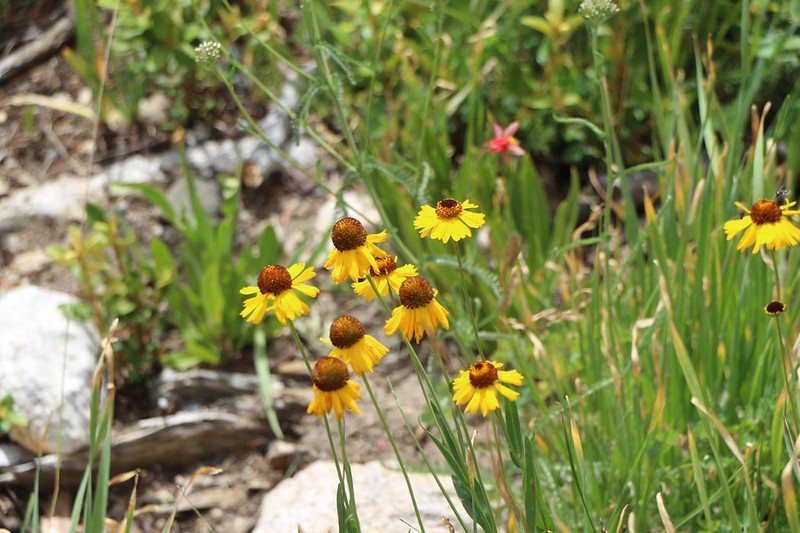 Yellow daisy flowers along a watercourse

All too soon, we saw the trailhead parking lot down below in Onion Valley.  As we got closer we could make out our car.  As our altitude lowered the temperature also rose, and it was getting quite warm on the trail.  I thought about being able to turn on the car from a distance and get the air conditioner running, to prepare for our arrival.  But we couldn’t, so that was OK, too.  We just kept on hiking, and before we knew it, we were back at the trailhead.  I walked over to the bear box and got out our extra food that we’d left behind a week prior, and carried it over to the car. 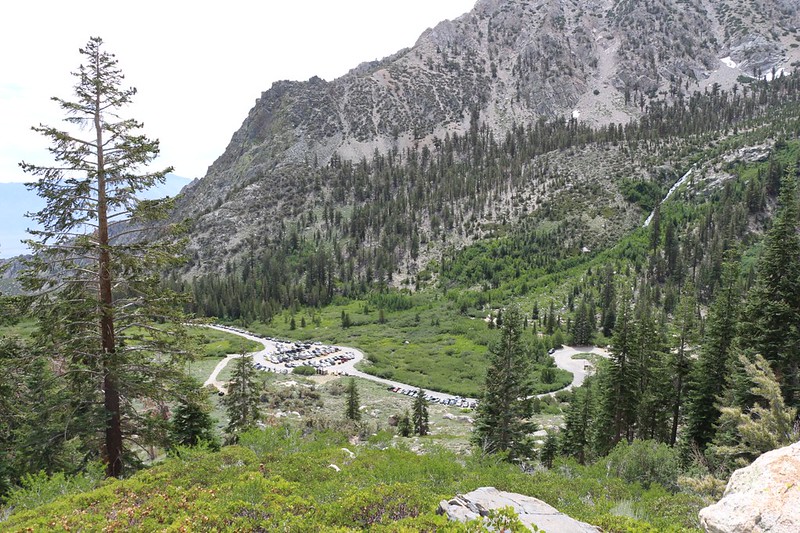 We could see our car near the Kearsarge Pass Trail trailhead, down below us in Onion Valley 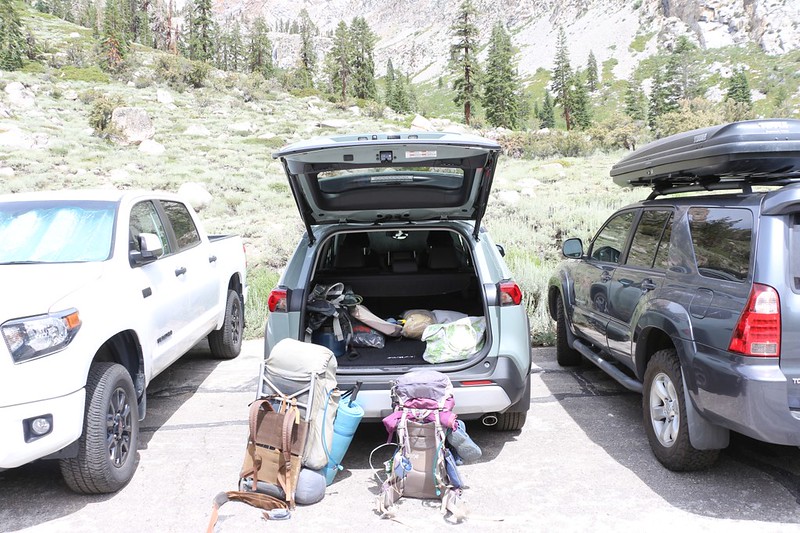 We arrived back at the car and it wasn’t even 11am – we’d have time to get lunch in town!

I started the car and got the A/C going right away.  Meanwhile, we opened our packs and sorted through our gear.  Some stuff we wanted in the car with us, like snacks and drinks, and the other stuff could stay in the back.  We got out our “Car Clothes” and changed into them in the restroom.  It felt good to wear non-stinky clothes, and to walk around in non-sweaty shoes.  It wasn’t as good as a shower, but it would have to do.  The Civilized World was expecting it of us.  After that, it was time to get in the car and go.  It was about six hours to San Diego, plus time to stop and eat.  We had lunch in Lone Pine, then continued down Route 395.

We talked a little bit about the trip on the way back, about how our gear had worked perfectly, with no breakages, and how grateful we were that it hadn’t rained on us every day.  We’d had a week of sunny weather.  We thought about the Rae Lakes, and how beautiful the area had been.  No wonder this was such a popular place to hike!  Even though folks on the internet complain that it’s overused and far too crowded, we didn’t feel that way at all.  We solved that problem by seeking out secluded campsites whenever possible, off the beaten path, and this made all the difference.  The Sierra Nevada is a very large place, after all, and I think that there is more than enough room for everyone to visit if they want to.  In fact, we were already intending to explore other places in the Sierra next Summer, both north and south of here.  Rather than being sad that the trip was over, I was excited to get back home and start planning! 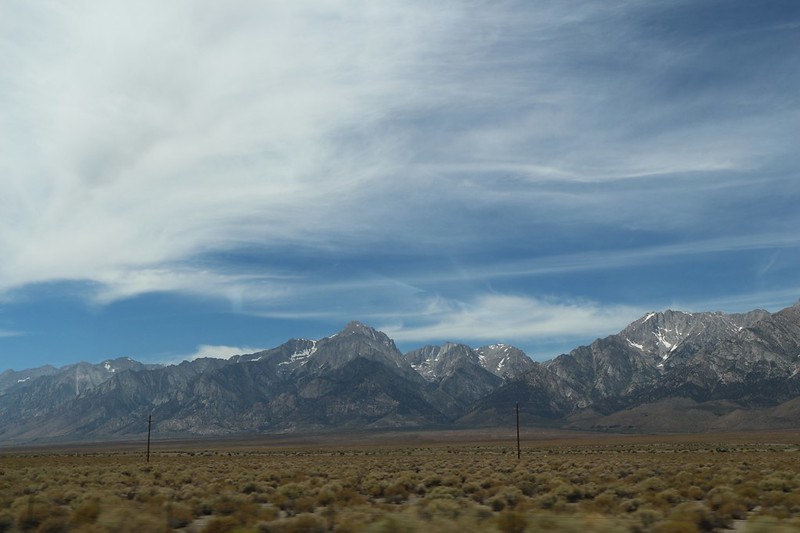 Looking west at the High Sierra from Route 395 – It’s hard not to love the East Side!