We hiked from Dusy Basin up and over Bishop Pass, then continued north along the Bishop Creek drainage, passing the Bishop Lakes, Saddlerock Lake, the Timberline Tarns, and Long Lake, until finally arriving at the trailhead at South Lake.

We woke up at 3:30am or so, in the dark, and it was cold out there.  There was a steady breeze blowing down from the north, and it wasn’t easy finding the willpower to get out of our sleeping bags in order to get dressed for hiking.  We did it, of course, but we also kept our gloves and hats on, and left our legs in the sleeping bags until we had everything else packed up.  Then it was time to get moving.  We stayed busy and that helped keep us warm.  It was still dark, at about 5:30am, when we were ready to get hiking.  We took one more look around the campsite with our headlamps and made sure we hadn’t forgotten anything, and then we headed out, directly into the wind. 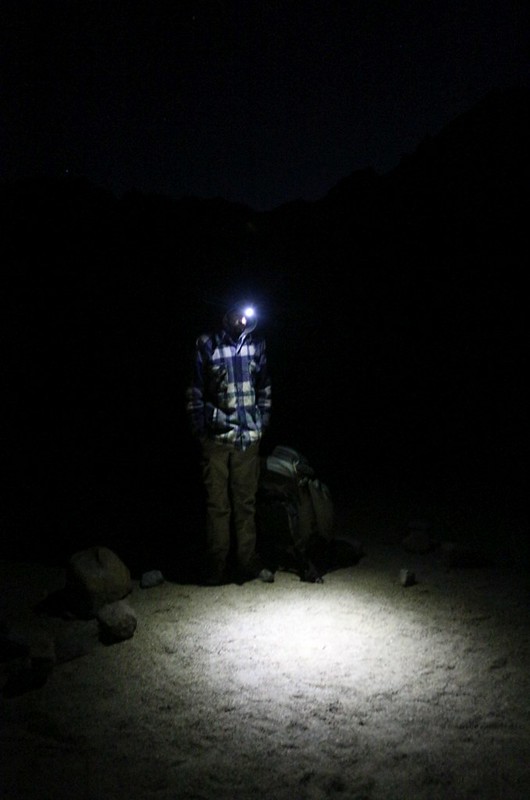 We woke up extra early in order to get to our car ASAP – last day of the trek!

With our extra layers on, it was actually quite pleasant out there in Dusy Basin in the dark.  There was a tiny crescent moon, and the stars were bright.  Venus and the moon were rising over the Sierra Crest as the sky began to get light in the east.  Very pretty.  We had two miles of hiking and 800 feet of ascent in order to reach Bishop Pass, and it took some time.  As we hiked the sky slowly became brighter, and soon the nearby mountains began to show the telltale signs of alpenglow.  The camera’s exposure settings made it look like day, but it was actually very dim and we were hiking along using our headlamps for most of an hour.  We saw a few headlamps down below us in the basin as we climbed.  It looked like a few other people were finally getting up.  But we were the first, and got the jump on all of them.  We were also hiking fast in order to stay warm. 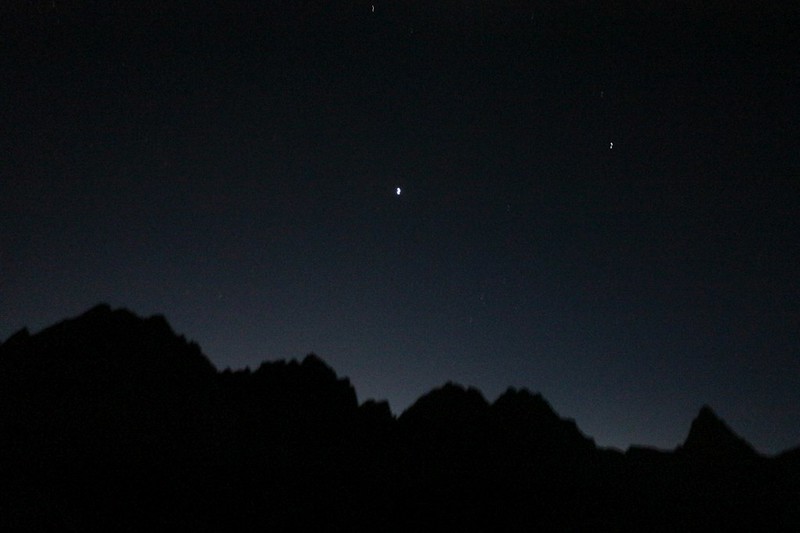 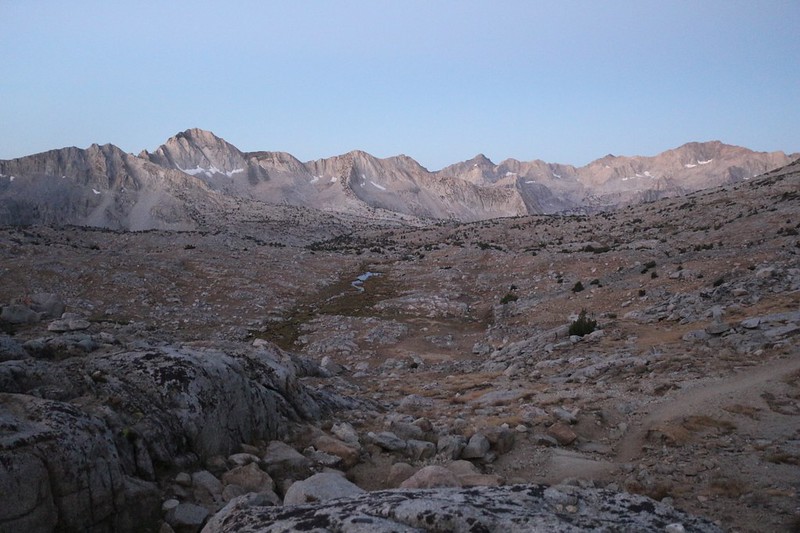 Dawn alpenglow over Dusy Basin as we neared the pass

Dawn was just breaking when we arrived at Bishop Pass.  We were still in the shadow of the Sierra Crest and Inconsolable Range to the east.  The wind was blowing quite strong up on the pass, and we didn’t stop for long.  In fact, we didn’t even take off our backpacks.  But we did stop long enough to take a whole bunch of photos.  These are required at such times.  This was the fifth pass we’d climbed on this trek, all of which were nearly (or over) 12,000 feet in elevation.  And all of them were true High Sierra passes, made of solid granite, with even taller peaks on either side.

We took a look back at Dusy Basin and said goodbye, then turned north to look down into the Bishop Creek drainage.  It was deep in shadow, but we could see the bright sky reflecting off the many lakes in the upper basin.  These were known as the Bishop Lakes, and further north were yet more lakes, like links in a chain that ran down the valley.  It was a seriously beautiful spot.  If it had been warm and sunny we would have hung out up there and taken a long break.  But it was cold and windy that morning at dawn, and we kept on moving. 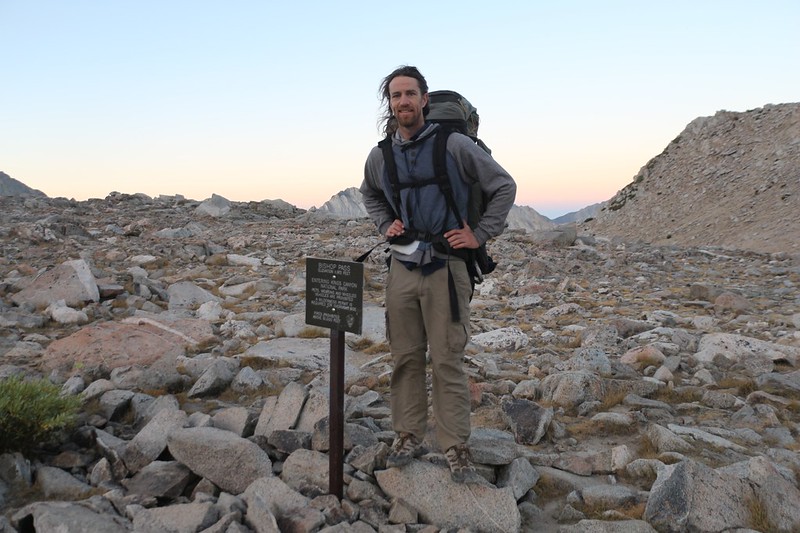 It was cold at Bishop Pass (11972 feet elevation) that morning, and the breeze was strong, so we didn’t stay very long

Panorama video from the top of Bishop Pass at dawn 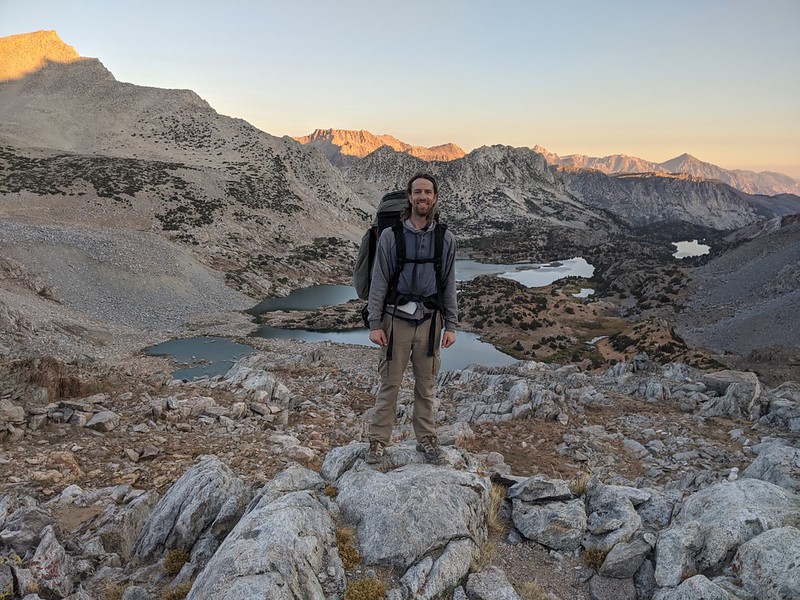 There is quite an impressive headwall at the top of the valley just below the pass.  The trail made many switchbacks that had been blasted into the wall by the trail builders long ago.  Back and forth we went, pausing every so often to take in the views and snap a few more photos.  What a gorgeous spot.  We reached the basin down below and crossed over some smaller waterways.  There were skins of ice on the smaller ones, a testament to how cold it was that morning up above 11,000 feet.  Down there in the valley we weren’t due to get any sun for hours, so on we hiked, staying warm as well as we could. 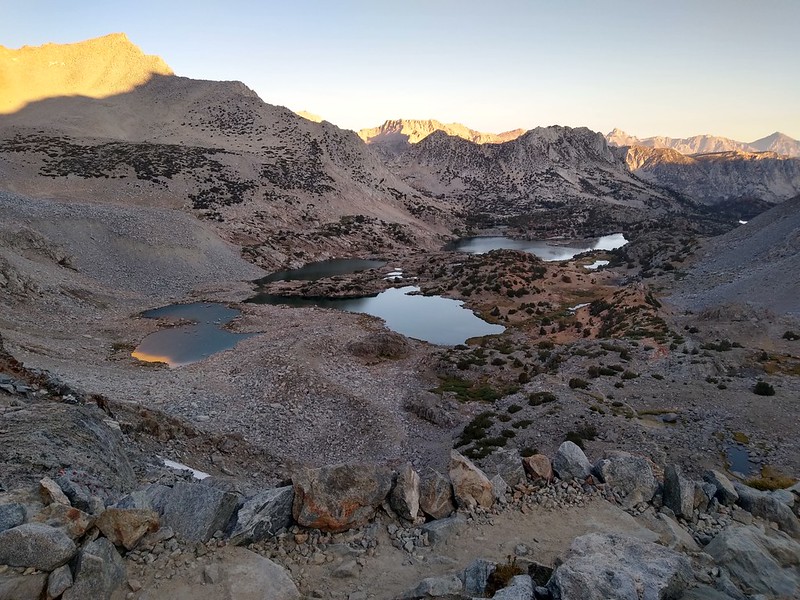 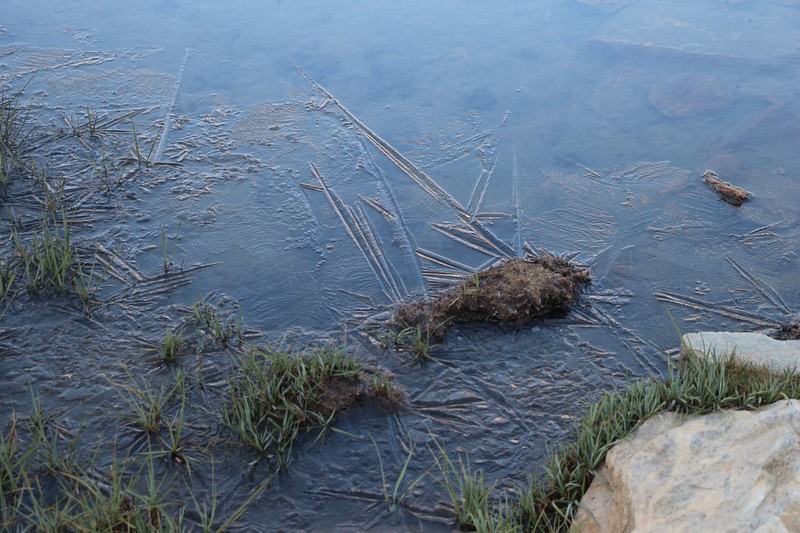 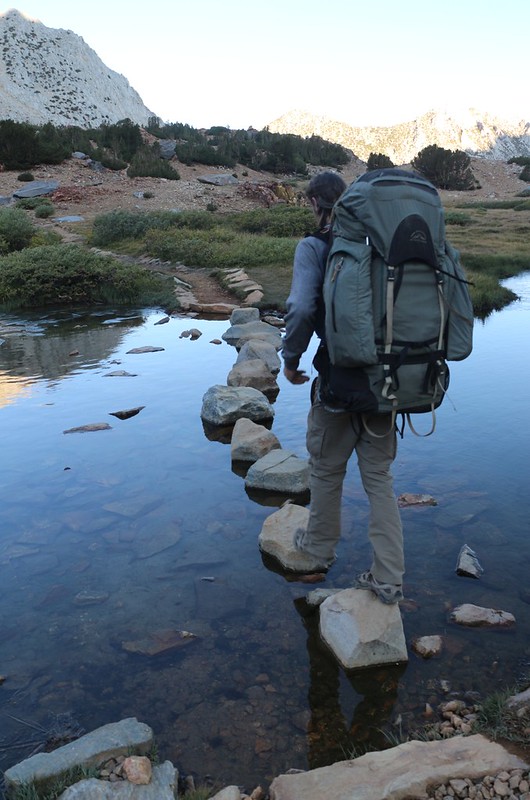 The trail crossed over shallow water on boulders

We continued along, leaving the Bishop Lakes behind.  Next stop:  Saddlerock Lake.  It was quite large, and had a couple of rocky islands in the middle.  We crossed the outflow on a small wooden bridge (Bishop Creek) and headed downhill next to a small waterfall, then passed along the shore of one of the Timberline Tarns.  After that, the creek dropped rapidly toward Spearhead Lake (shaped, not surprisingly, like a spearhead) while the trail slowly descended, traversing along the side of the valley above the lake. 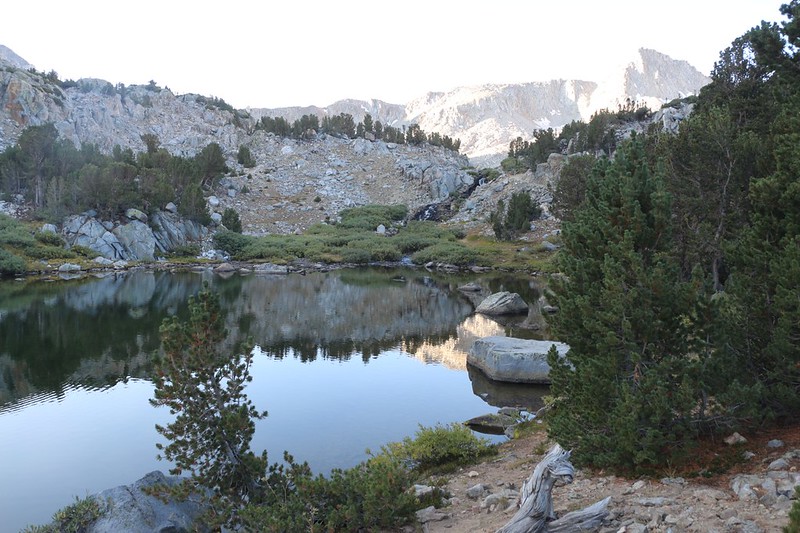 Looking back up Bishop Creek at a small waterfall and one of the Timberline Lakes, with Mount Goode in the distance 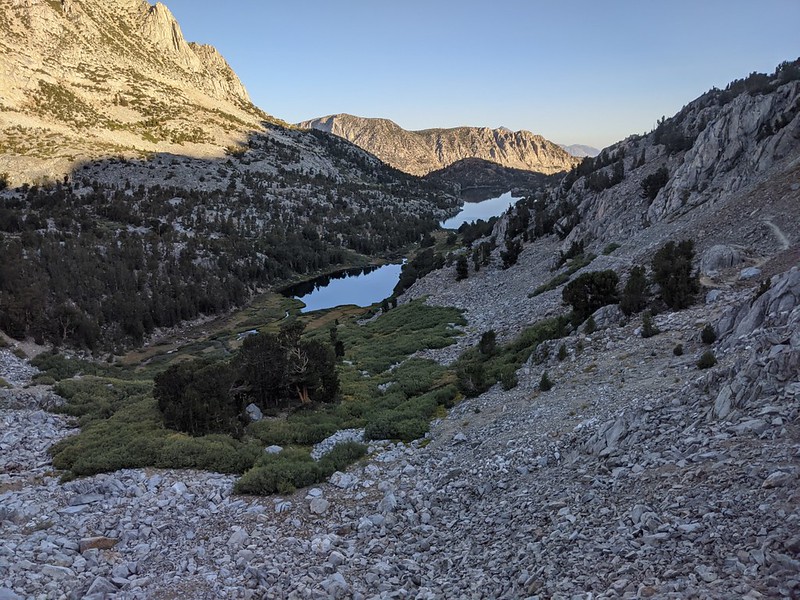 Long Lake was next on our list.  And it really was almost a mile long, so we got to enjoy it thoroughly, as the trail lies directly along the shore.  Chocolate Peak was on the east, and Hurd Peak was to the west, with the lake sandwiched neatly in between.  The light was all wrong for viewing Chocolate Peak, but take my word for it that it is truly “chocolate” in color.  Very distinctive from the gray granite all around it.  Vicki and I had spent two nights along this lake back in 2011, and we really enjoyed it.  This time, however, our plan was to hike right on by without delay, because we wanted to get back home.  We were like horses nearing the stables, and nothing was going to stop us from getting there, not even a beautiful lake like this one.  We compromised and took a bunch of photos and videos instead. 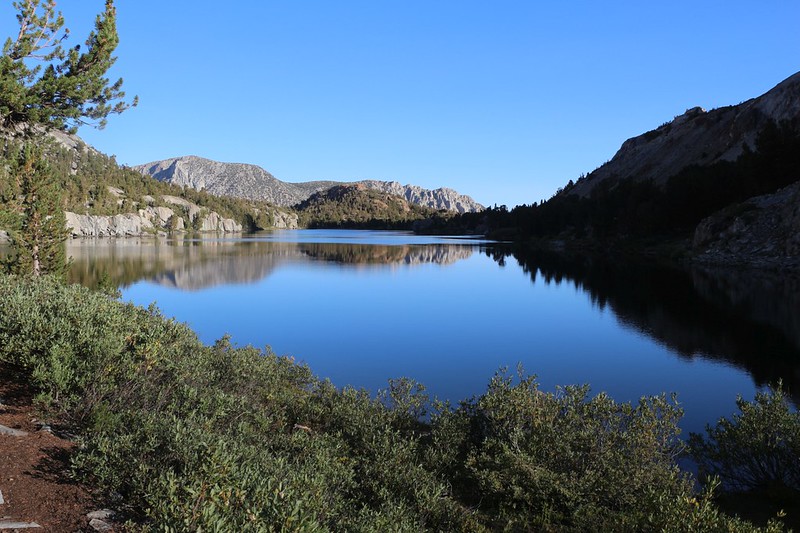 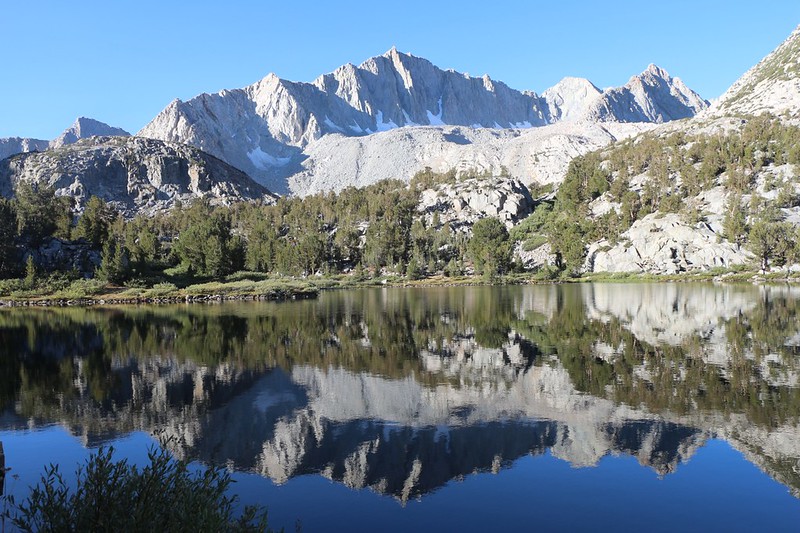 Looking south over Long Lake, with Bishop Pass on the left, and Mount Goode on the right 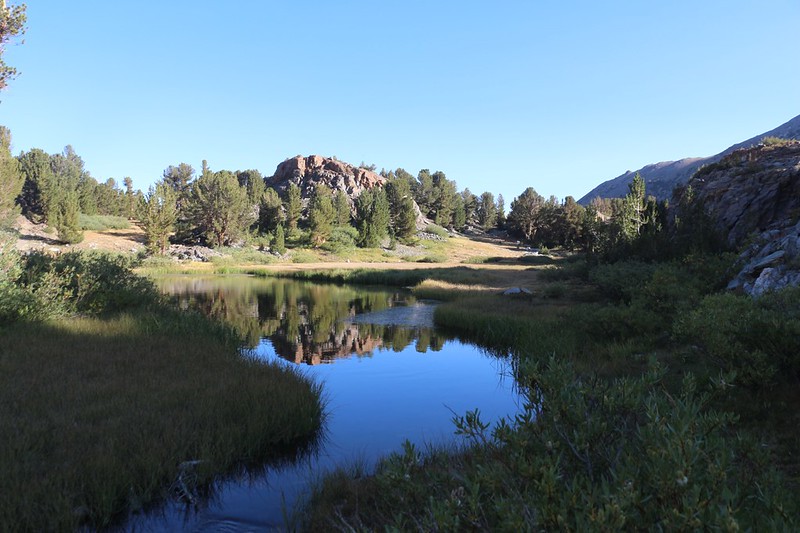 Small reedy pond on the northern edge of Long Lake

We still had two more miles and 900 feet to descend, and our feet just kept on going.  And that was just to reach the trailhead.  The road construction on South Lake Road meant that our car was parked several miles from the trailhead.  Our plan was to stash our big packs near the (under construction) parking lot and hike/jog rapidly to the car, then come back to get the packs.  But that was in the future.  Just now, we were still enjoying the easy downhill hike.  Hurd Lake was visible for a short time from the trail, which never went anywhere near it.  There were a few sets of switchbacks along the steeper areas, but for the most part the trail descended gently through the forest, and eventually crossed out of the official John Muir Wilderness and into regular National Forest land. 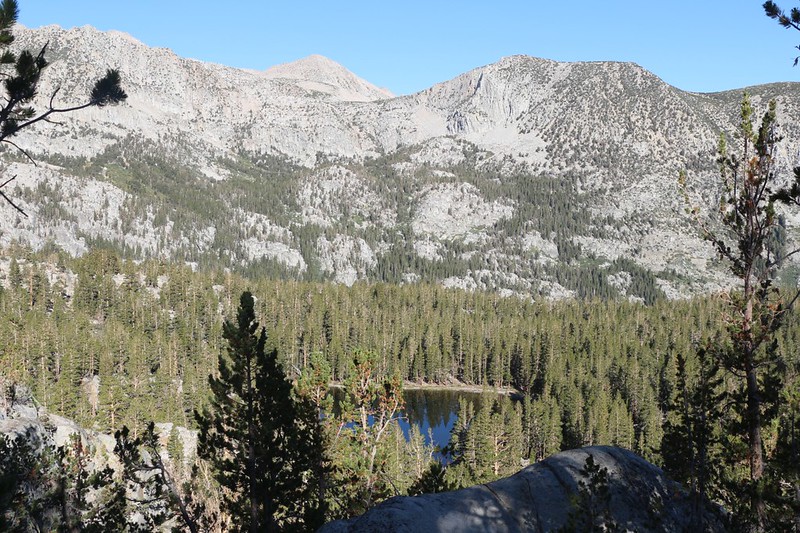 Tiny, often-overlooked Hurd Lake, with Thompson Ridge across the way 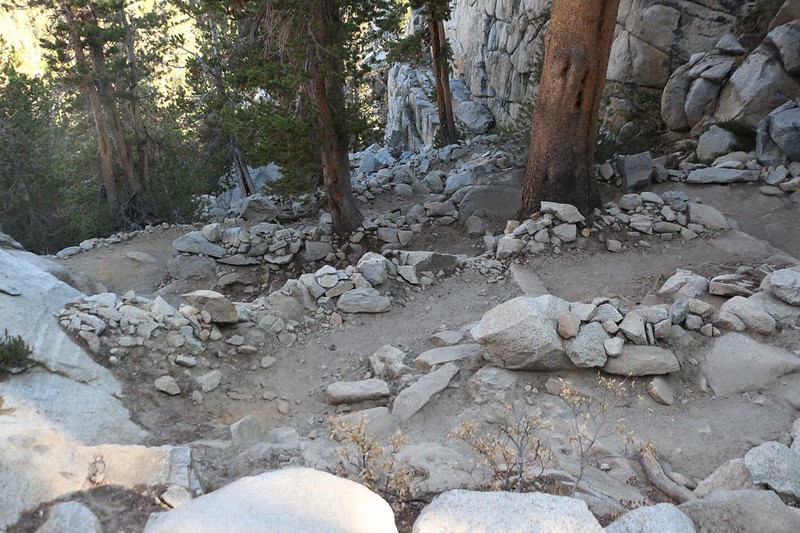 Switchbacks on the Bishop Pass Trail, as we descended from Long Lake toward South Lake 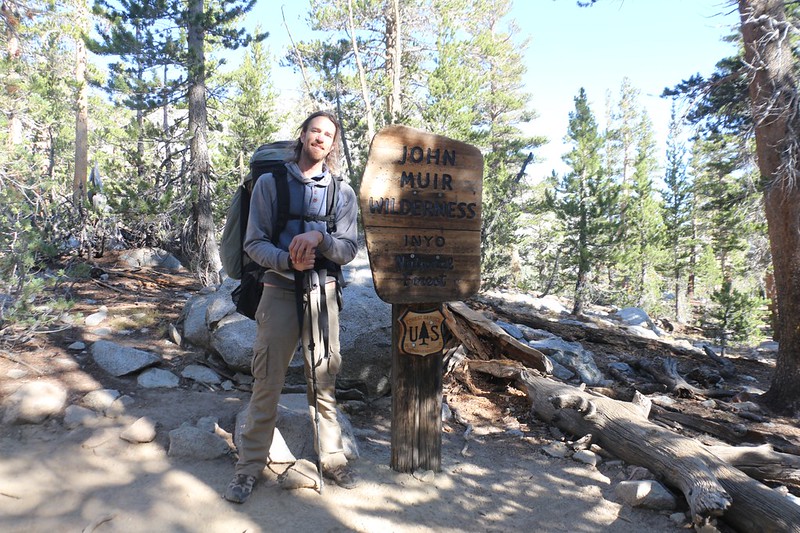 Posing at the John Muir Wilderness sign, not far from South Lake

We arrived at South Lake and took a timer-shot of the two of us, the only one we had.  We noticed that there were no fishing boats on the lake, so it looked as if the trail closures in the National Forest also applied to boating on the lake.  In fact, it turned out that it applied to all entry anywhere in the forest, not just trails.  They were serious, and it was all meant to prevent more wildfires.  Or so the official reasoning went. 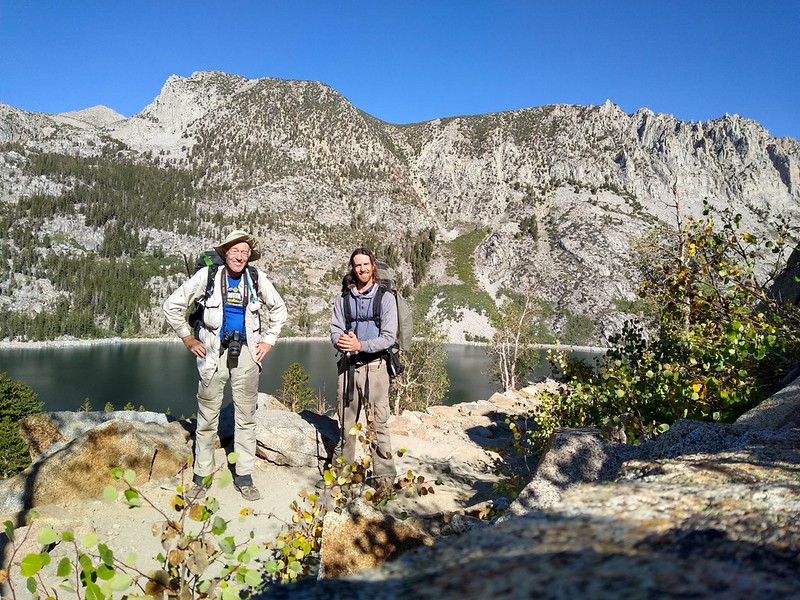 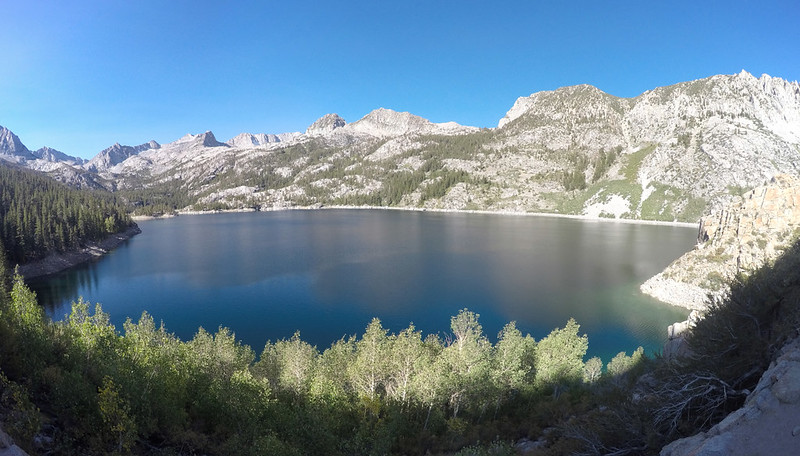 We arrived at the trailhead and saw some people loading their backpacks into an SUV.  Theirs was the only car in sight.  It turned out that our timing was perfect.  If we had arrived even two minutes later, they would have left, and we would have had to hike all the way back to the car.  One of them had already jogged down there to get the SUV.  As it was, they had an extra seat for me, and when they offered a lift to my car I jumped at the chance.  What great guys!  I quickly made sure that I had my key and wallet, and before I could tell my son to watch our packs, we were driving down the road.  It was that close. 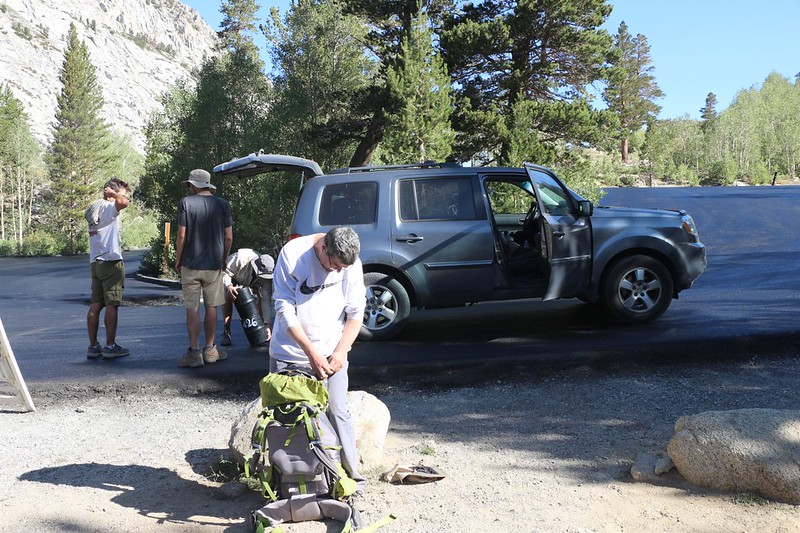 We arrived at the Bishop Pass Trail trailhead parking lot at South Lake, and were lucky to score a ride down to the car! 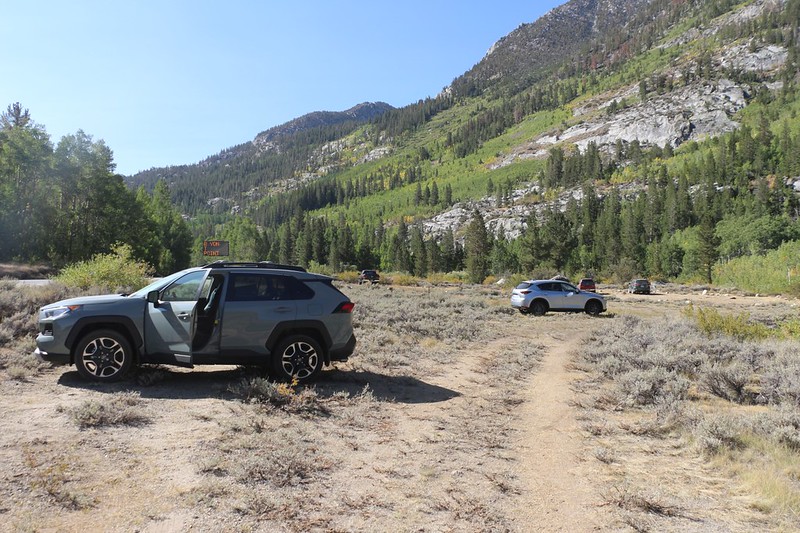 It was only 10am when I arrived at my car, which was looking rather lonely in the dirt parking lot below the Tyee Lakes Trail.  When we left, a week before, this lot was packed with cars, as it was Labor Day Weekend.  I took the notice off my windshield and ignored the fine print for now.  I had a pretty good idea what it said anyway.  Then I drove back up the hill to the trailhead.  As we loaded our backpacks into the car a gun-toting National Forest Law Enforcement Officer arrived looking stern.  He was there to make sure we weren’t trying to sneak into the forest!  No, we assured him, we were just leaving, and that seemed to make him feel better.  He drove away, looking for other miscreants, no doubt.  We decided not to unpack anything quite yet, and headed back down the hill to the overnight lot, then rummaged through our gear. 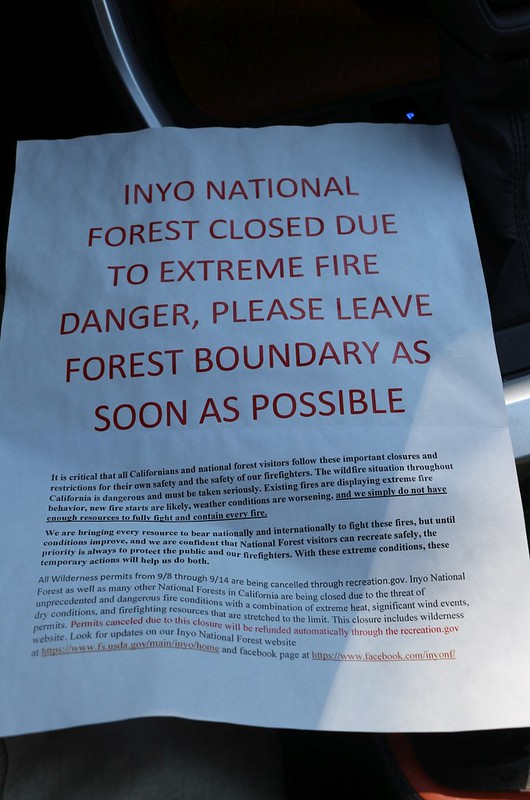 We got out fresh sets of clothes and put them on, thereby ridding ourselves of the stinky clothing we’d been sweating in all week.  And put on different shoes, as well.  Our bodies still reeked, but we looked much more presentable.  We got out some snack for the ride home, and organized the car for travel.  We were almost ready to head down into town for lunch.

But first, we each cracked a soda pop to celebrate.  We had hiked over 65 miles in seven days!  We’d climbed over five passes and seen plenty of lakes and streams.  We’d been inundated with smoke and ash, seen both hazy days and clear ones, and generally just enjoyed an excellent and memorable week in the High Sierra.  Hooray!  We tapped the cans together in a toast and downed them in one long drink.  Ahhhh!

After that, we drove on down into the city of Bishop, and got ourselves some fast food near the highway.  And then it was time for the six hour drive home to San Diego.

All in all, it had been a great trip.  We only had a couple of gear issues, and (except for the smoke on the second day) the weather had been fine.  Both of us decided that this trip was well worth it, and that next year we’d finally get around to doing the Whitney trip we’d planned to do originally.  Whitney wasn’t going anywhere, after all.  And I had just knocked out another section of the Pacific Crest Trail, so all was well.  This had been my fourth trek in the Sierra Nevada in 2020, so I was quite satisfied.  And next year was going to be even better.  I was already beginning to make some new plans as we drove…